I enclose photos of my first attempt at a layout. It is the result of the last three winters.
It started out as 6 ft by 4ft and has grown into 10×4 with a 6×3 spur.I know it is not correct in time frame but with with the exception of the track and controllers 90% of everything has been from Ebay or Gumtree so it has evolved rather than planed.

I have found your Emails a great source of information.

As I get pleasure out of the creation of the layout rather than running it, I am now at a loss of where to go from here. I could always start again. 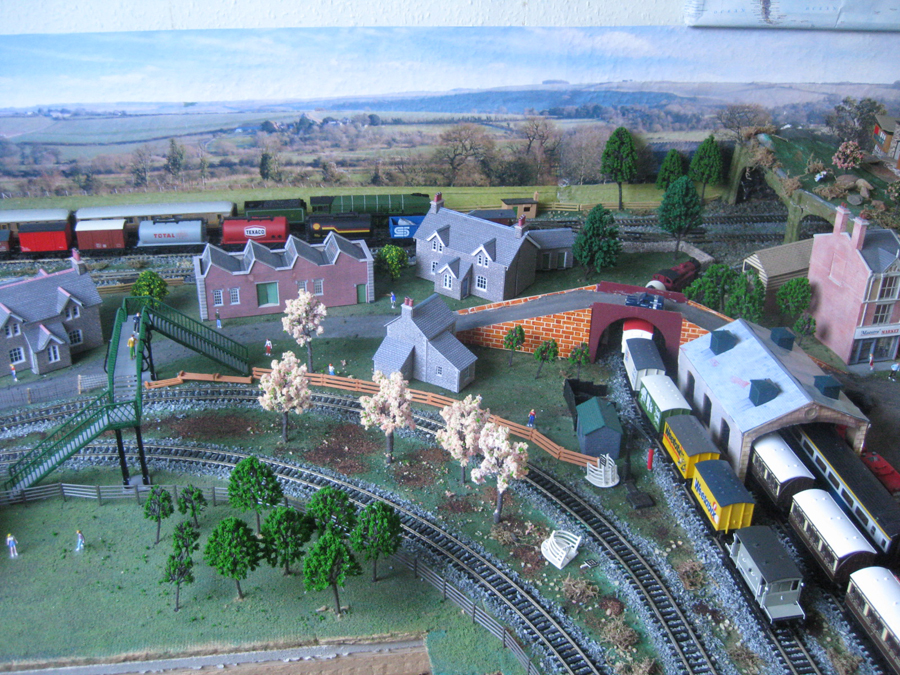 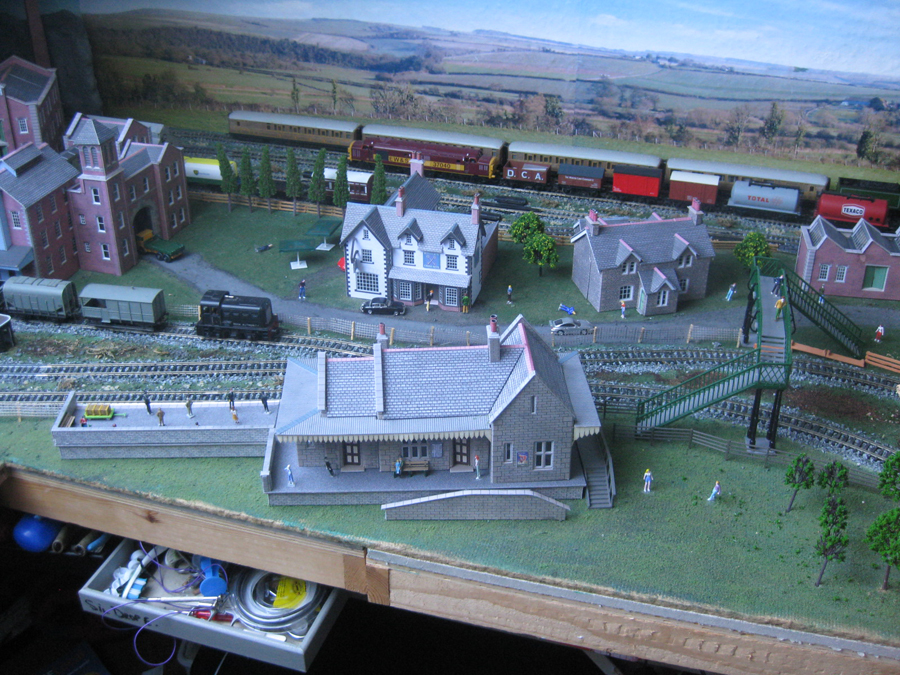 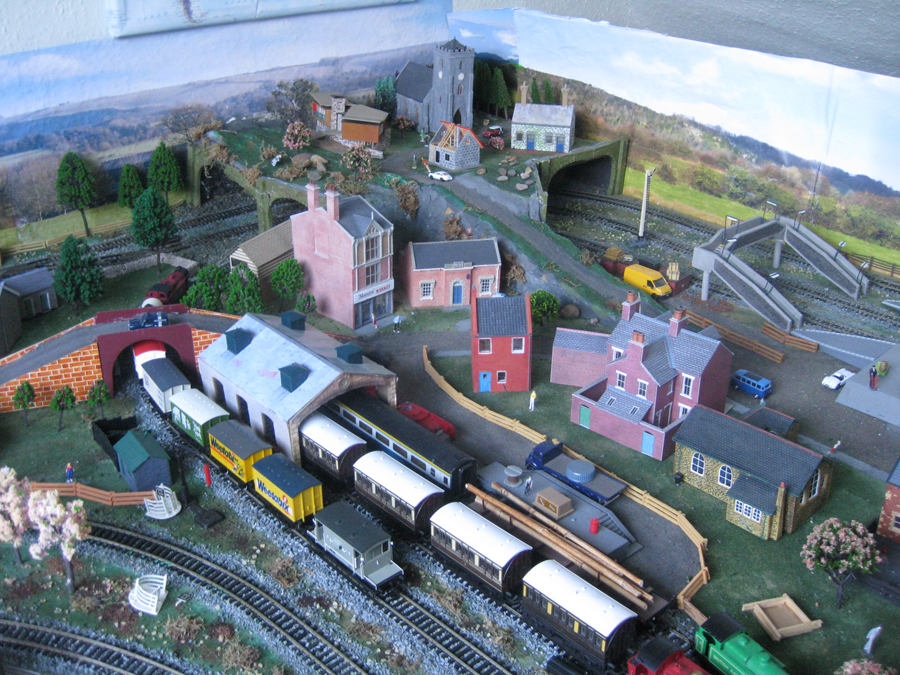 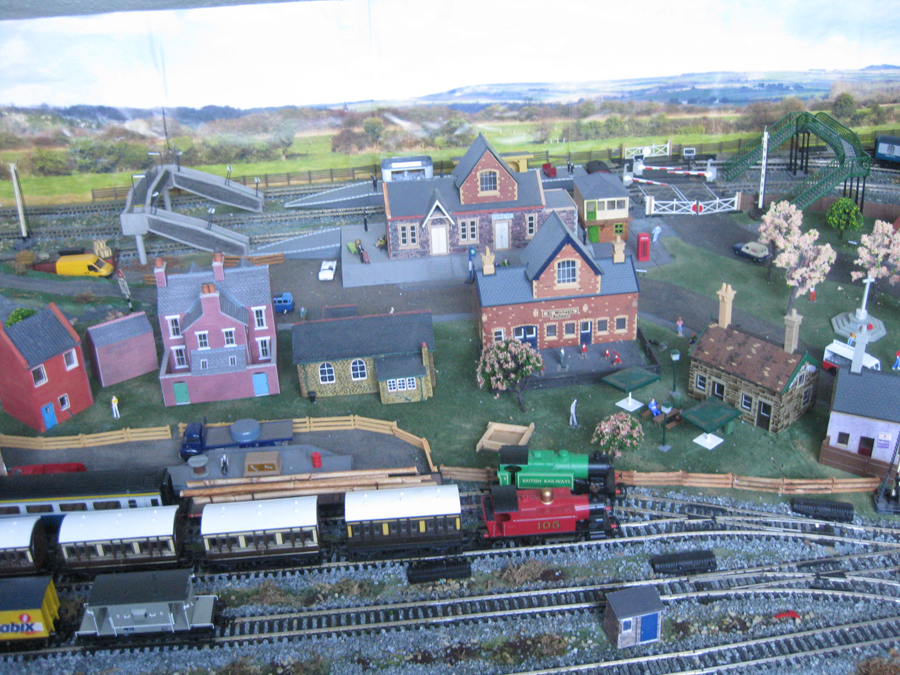 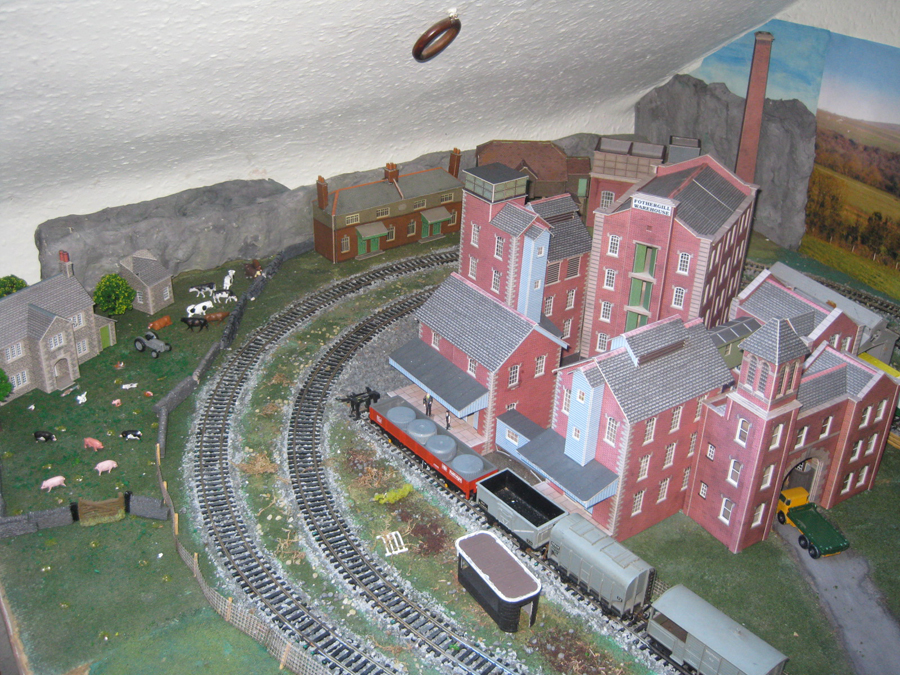 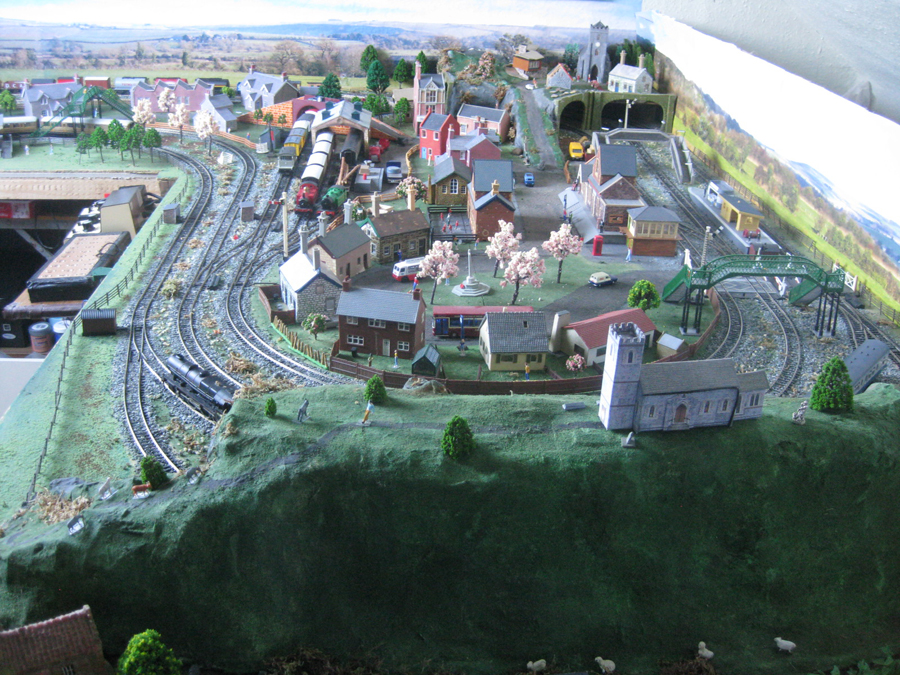 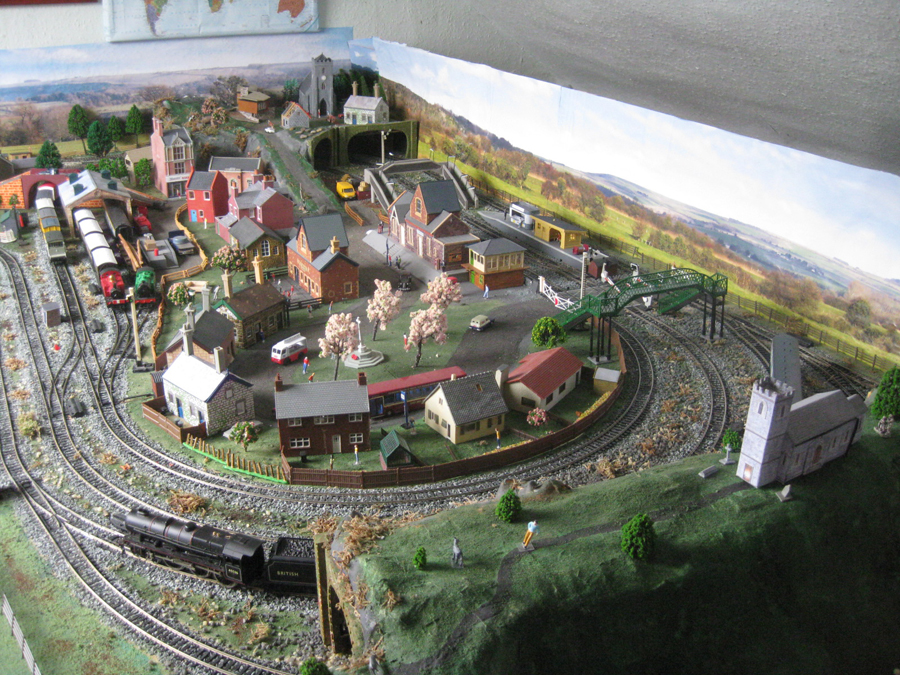 Have been getting all your mails since I started my N Scale Layout about 2 years ago and really enjoy seeing what is possible on a layout and also how ingenious modellers get to create their vision – sometimes on a shoestring budget.

My layout is nowhere complete and as it is basically a U shape unit about 30 centimetres wide and about 5 meters long running around our study. I ended up with situation of how to get sets from one level to the next as I don’t have space for the magic Helix. My layout (The St Matthews Island Railroad – named after my son, not a saint all the time but mostly!) depicts the seaside town on Moreton with some industries and a plateau above it. The trains need to move goods to and from the industries in the town and port up onto the plateau and interior of the island.

So after some investigation I came across those wonderful things called cassettes and the attachment shows a concept I am fine tuning to allow me to run trains “around” my island.

My layout is DC and is pretty hands on – no electric points, all hand operated with push pull mechanisms under the layout and the “finger of my Lord and Savoir” un-couplers . I want to play with my trains and not just watch them moving from one place to the next holding a consul like the kids of today in front of their computers….

3 cassette mounting points to allow for sets to be moved onto next level or line
Created using Electrical Ducting mounted onto 1’ x 2’ timber plank.
Created Girder Beam Bridge set up just to create a decent effect.

Wooden block mounted to the wall is support for the lowest level which is set up under the frame holding the middle and top levels.

Relief buildings in foreground will be fixed to a removable panel which will give access to the lower level in case of derailment.

Electrical connections using paperclips soldered onto main rails, these have been tested and work fine.

One rail will be slit at one end to break circuit and stop the engine as it comes to the end of the cassette. When cassette is reconnected the other way around the engine will again pick up power to operate.

I will need to work on the rail alignment for finished product but this is just a prototype to see if concept works.

Problem is that all cassettes I make need to connect perfectly to all 4 exit points (3 on one side of layout and one on the other). This is going to be fun…..

I used an L shaped piece of aluminium channel to form a lip under which the end of the cassette slides to secure the cassette in place.

The rails are raised off the aluminium to prevent any issues with current.

Keep up your postings as you are indeed helping many of us modellers bring to life something we have dreamt of and obviously spent many hours of work on. 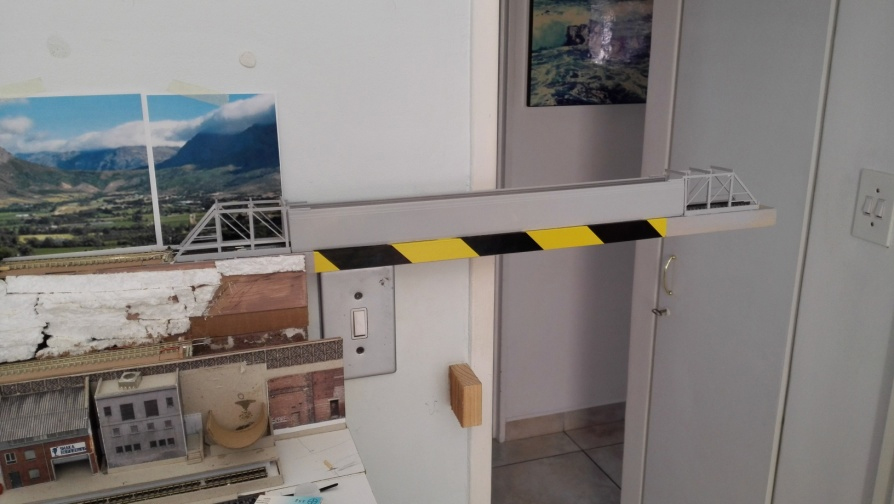 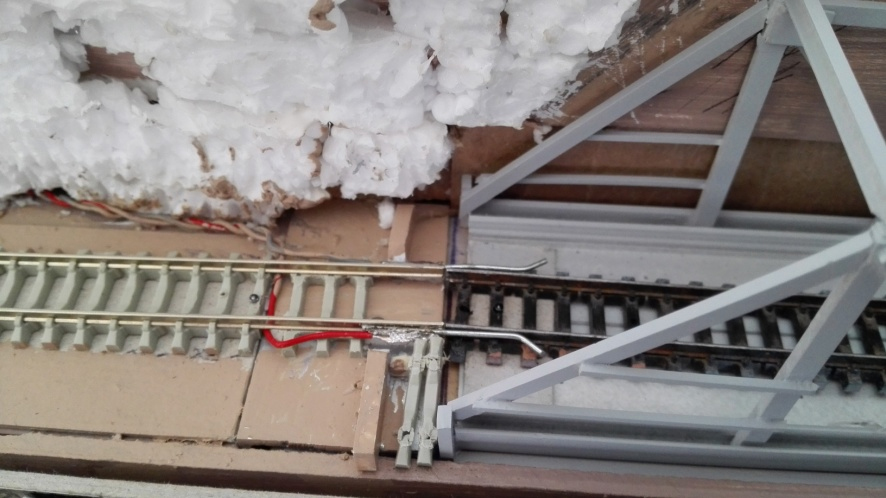 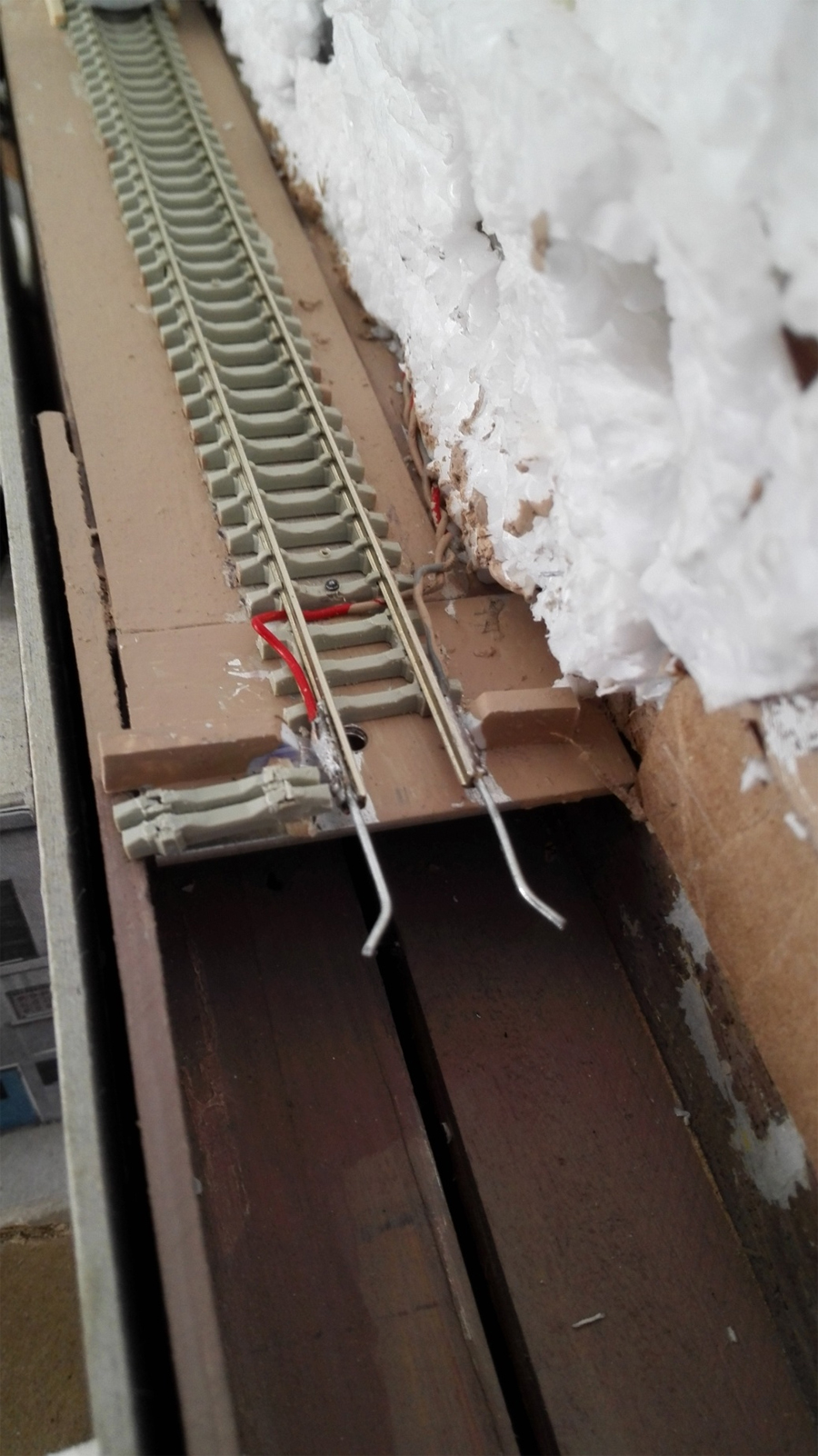 I finally finished my video on the American Freedom Train (AFT). I created my own replica in N scale of the original 1947 AFT locomotive and added to it 6 passenger cars of my own original paint scheme and my custom designed decals. I created the passenger cars in early 2002 as a commemorative and tribute to the heroism and swelling pride of Americans following the World Trade Center attacks of 9-11-2001.

(These cars have their own 2001 Freedom Train locomotive I designed in 2002 to complement them in the style of the 1947 loco. But, if I can find the time, I am now thinking of creating a 2001 loco using a more modern diesel style.)

But here is my video of the newly created AFT loco of 1947-1949. Once again, I am continuing the story line of Heritage celebrations and having the restored 1947 AFT loco lead an Excursion Train on a one day run through the Susquehanna Valley region.

A huge thanks to Arnie, Colin and Tony.

I found Arnie’s video educational and fun – a joy to watch.

Don’t forget the Beginner’s Guide is here if you fancy rolling your sleeves up and getting stuck in.