I started my HO layout back in the ‘90s when my now 37-years-old son was a teenager and we were building it together.

Complexity of dealing with reversing polarity segments in DC, general lack of knowledge, and shifting interests caused the layout to languish for decades.

When we moved residences in 2019 as part of downsizing in advance of my planned retirement, I decided to move the layout to an unused loft area in the new home (In retrospect clearly a mistake.)

There I began to work again on the layout. Free time following retirement and Covid-19 isolation contributed to my ability to focus on the layout.

Once the track was laid and DCC wiring was installed, I could run some trains — or at least locos to test my track.

The track plan is a basic figure 8, with elevated cross-over and two reversing segments.

The design was modified from a book of track plans published by Atlas. The construction method (admittedly dated and I would never recommend today) involved making parallel cuts in the layout top surface with a sabre saw, and then inserting a series of increasingly larger strips of wood “wedged” from side to side beneath the cut strip to pry it upwards, forming an inclined ramp (and reversing the process on the downward slope).

I used a popular brand of what I would call introductory quality track and turnouts. No soldered joints. Some flex-track, but mostly set-track as specified in the plan. Mostly 22” radius curves.

It was a potentially fun layout, but I could not get my locos to run without constant derailments. And in some cases, I couldn’t even get them to run! The problems were multiple and different.

For example, slight variation in the rate of incline created at least one “dip” and transitions were poor, causing locos to derail or stop running, either for lack of electrical continuity or physical contact.

My N&W “A“ (2-6-6-4) loco especially disliked the dip in the incline, it’s front truck wheels and rear truck wheels would be on opposite “high” sides of the dip, suspending the tractionless drive wheels spinning between the loco above the dip. The loco may be “articulated,” but not that way!

Turn-out issues, problems with joiners and flex-track all revealed the dire consequences of my novice errors years before in inadequate attention to sound roadbed preparation practice and proper track laying technique. These issues were undoubtedly compounded by flaws unintentionally introduced by the inevitable twisting of the approximately 5’ X 9’ layout during the move.

Ultimately I determined that I could chase derailments for years, and never get the layout to run reliably, or START OVER. The latter is what I did: I tore off the entire top of the platform and installed new plywood and 1” foam as a base.

I also took this as an opportunity, using some model train layout-planning software available on the internet, to redesign the layout with larger 24” min. radius curves to better accommodate my larger locos and 80’ passenger cars. That process revealed that I would need to expand the layout, both in length and width.

That expansion is why I’m writing you. I am not a gorilla and the width of the layout — 5’6” — means that any detail in the middle of the layout is unreachable from the sides.

This presented a particular challenge as a critical set of turnouts, on opposite sides of a bridge crossing the stream that bifurcates the track, is located right in the middle of the layout — with the crossover of the figure 8 mainline crossing almost directly overhead — a busy place for track laying and scenery.

Climbing up on the top of the layout was no longer an option given the modern use of foam board overlaying the plywood top surface.

Scenic Woodlands inclines and risers solved both the “transition” and smoothness issues associated with elevation change. A switch to better quality PECO track, turnouts, connectors, and use of tracksetta guides promised far better basic track-laying practice, hopefully with concomitant improvement in performance and reduction in derailments.

But how to do all that in the middle of the layout? 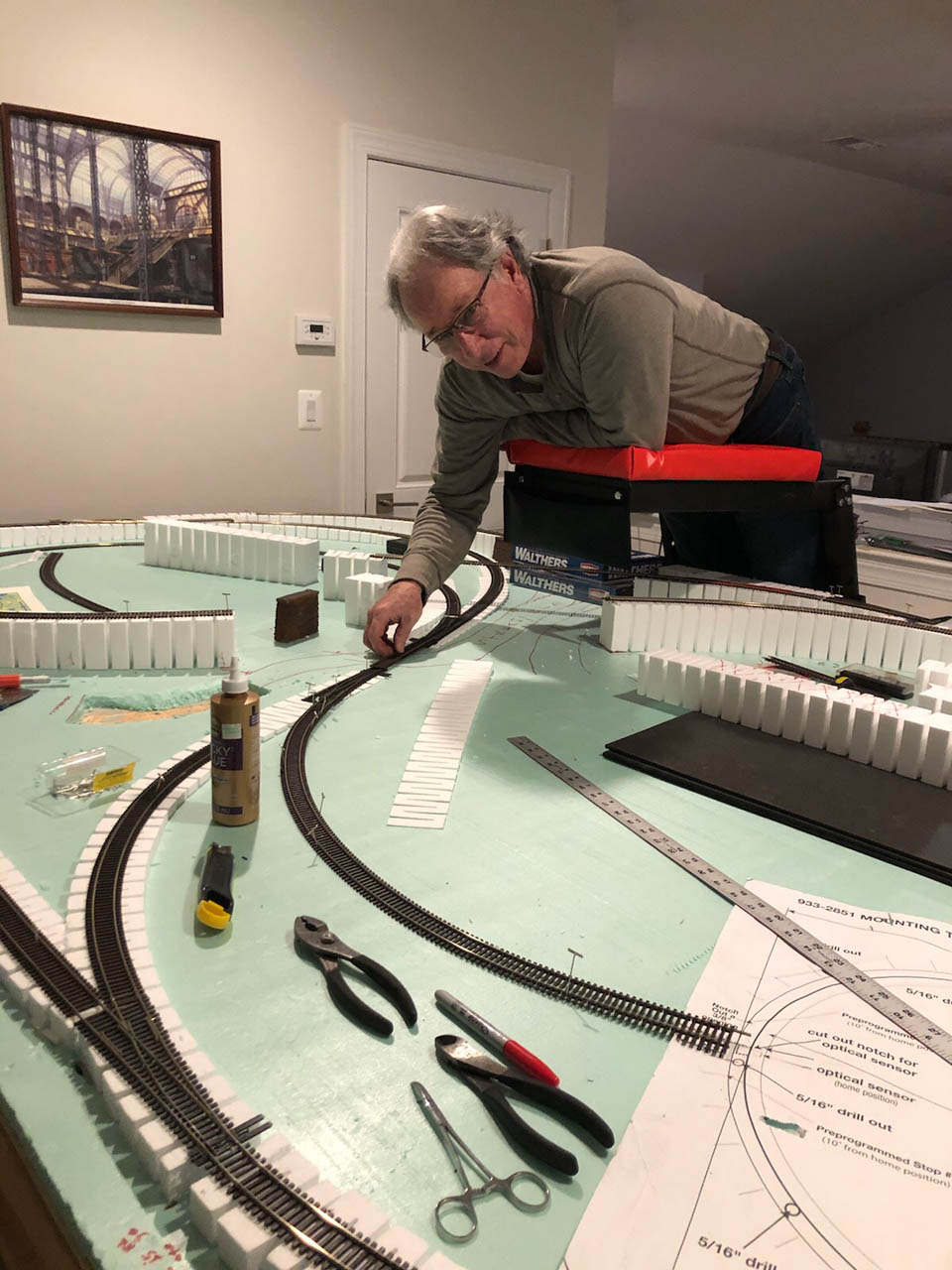 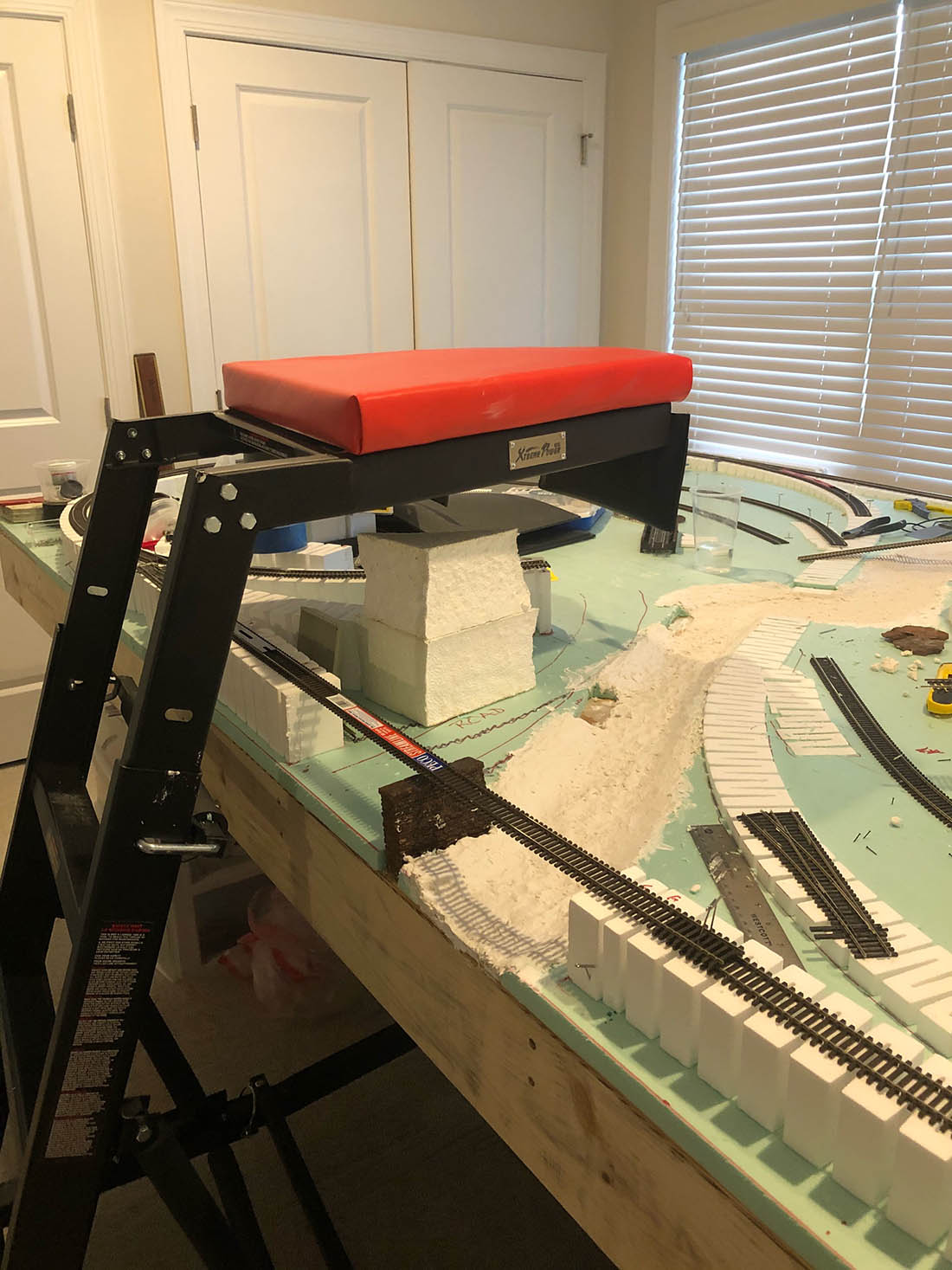 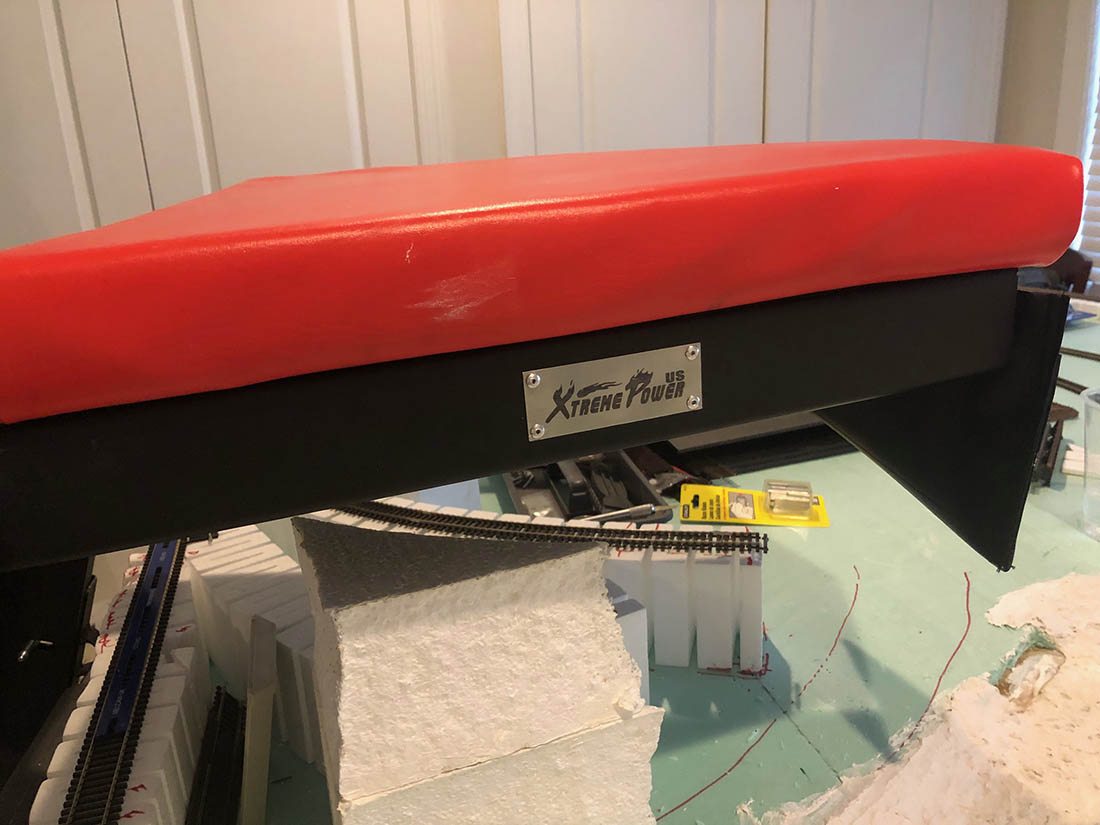 Works wonderfully and collapses to store under the layout when not in use. Height is adjustable too. Found it available States-side at Home Depot for under $200 with free home shipping! This thing opens a world of modeling possibilities.

As my new layout progresses, I’ll send some updates. But this discovery couldn’t wait.

Now on to Walt, who has done something I’m always banging on about: making a start.

I am returning to the wonderful world of HO trains after a 50+ year hiatus!

And I am incorporating the wife’s Dept 56 North Pole Series collection!

So my theme is going to be winter and snowy!

I am taking photos of my progress and was wondering if you were interested in showing others? 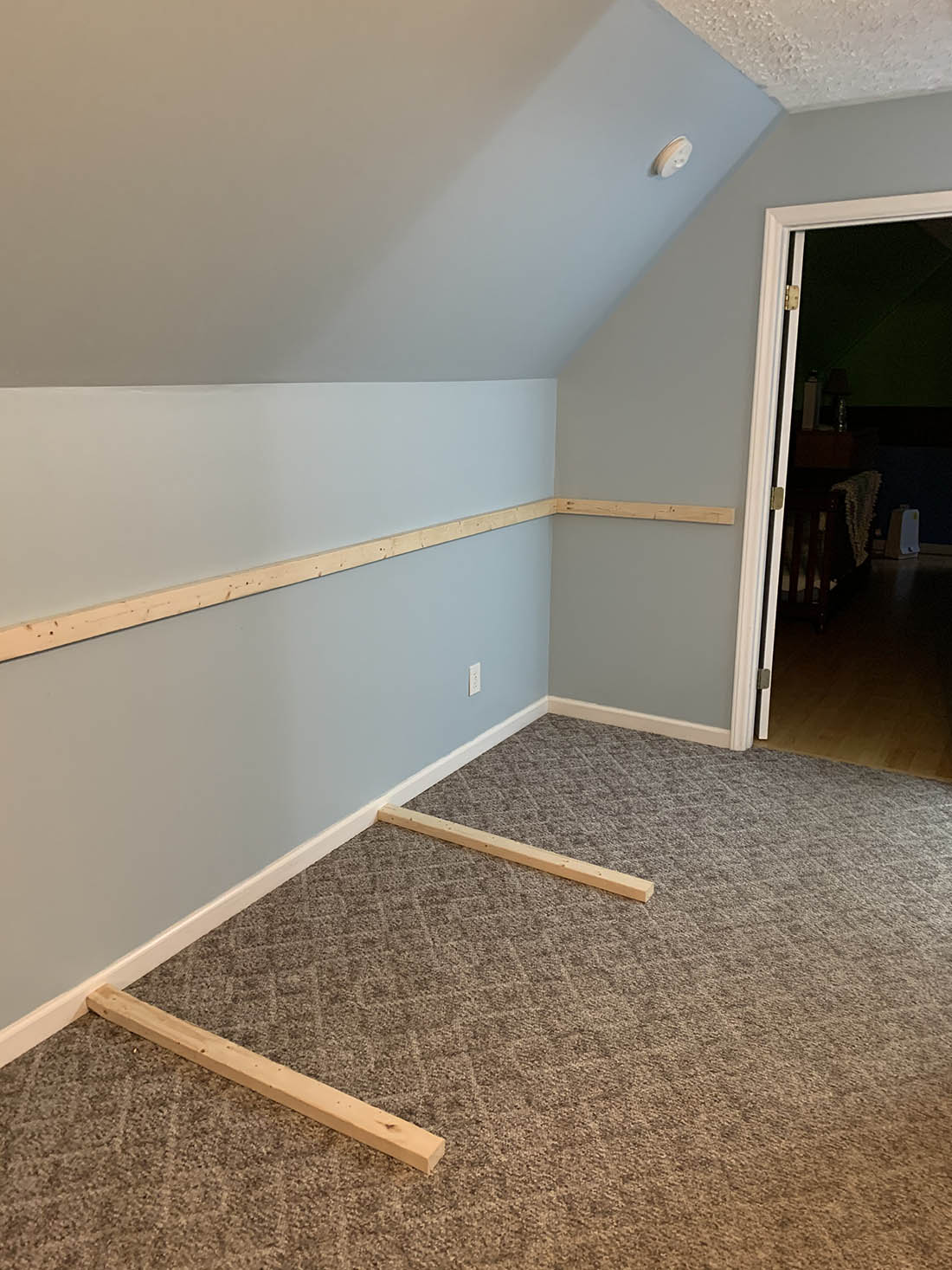 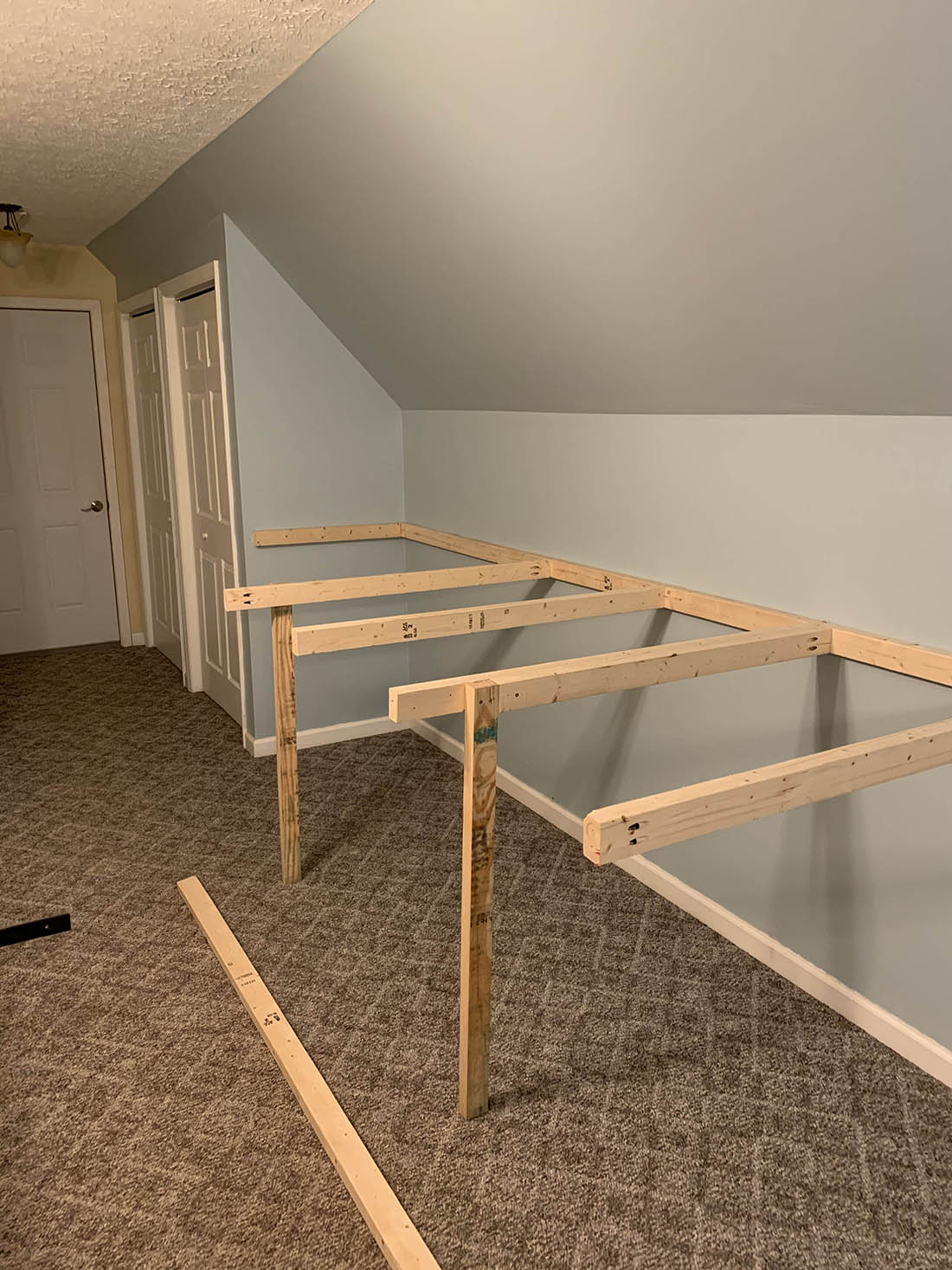 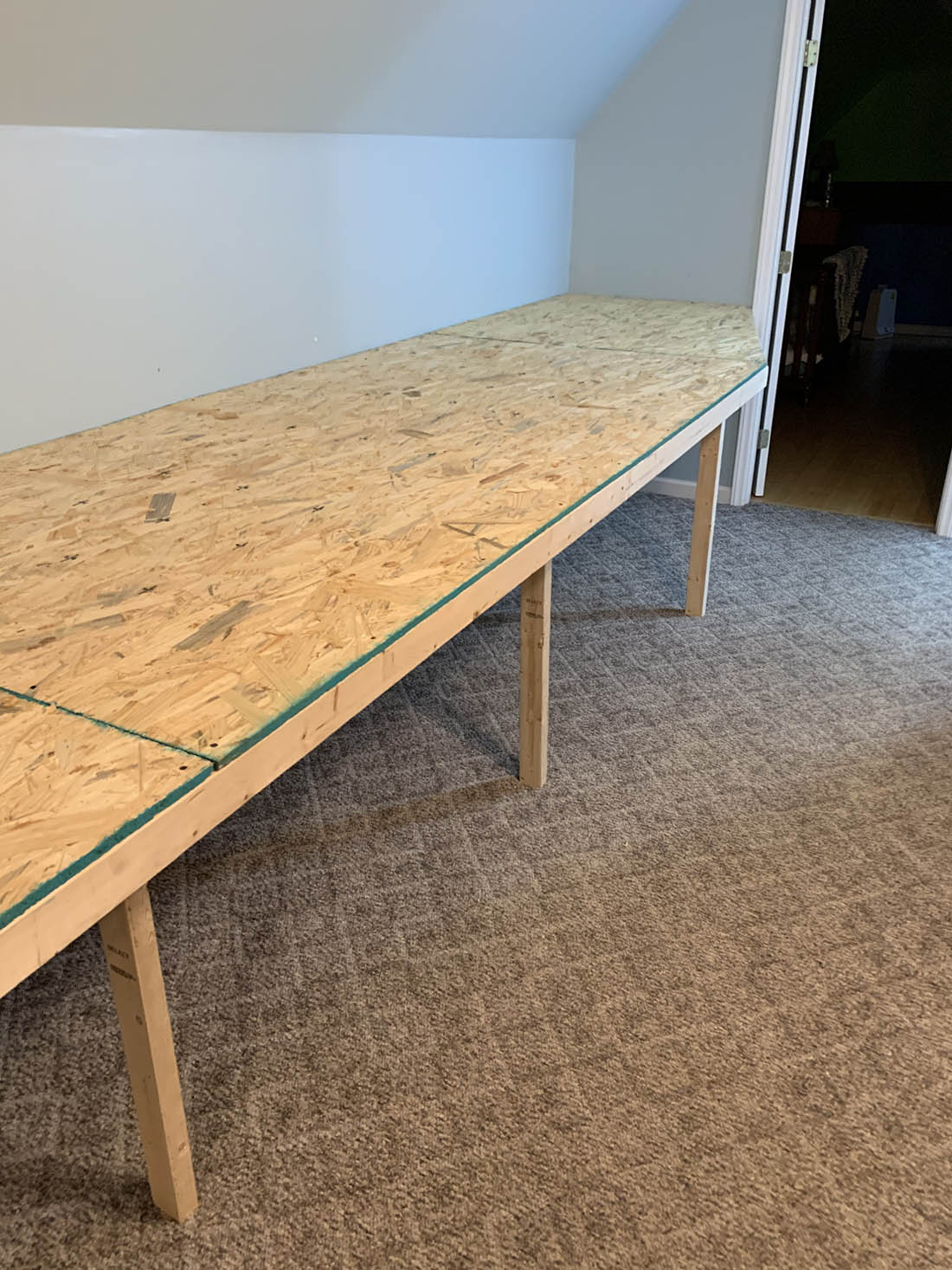 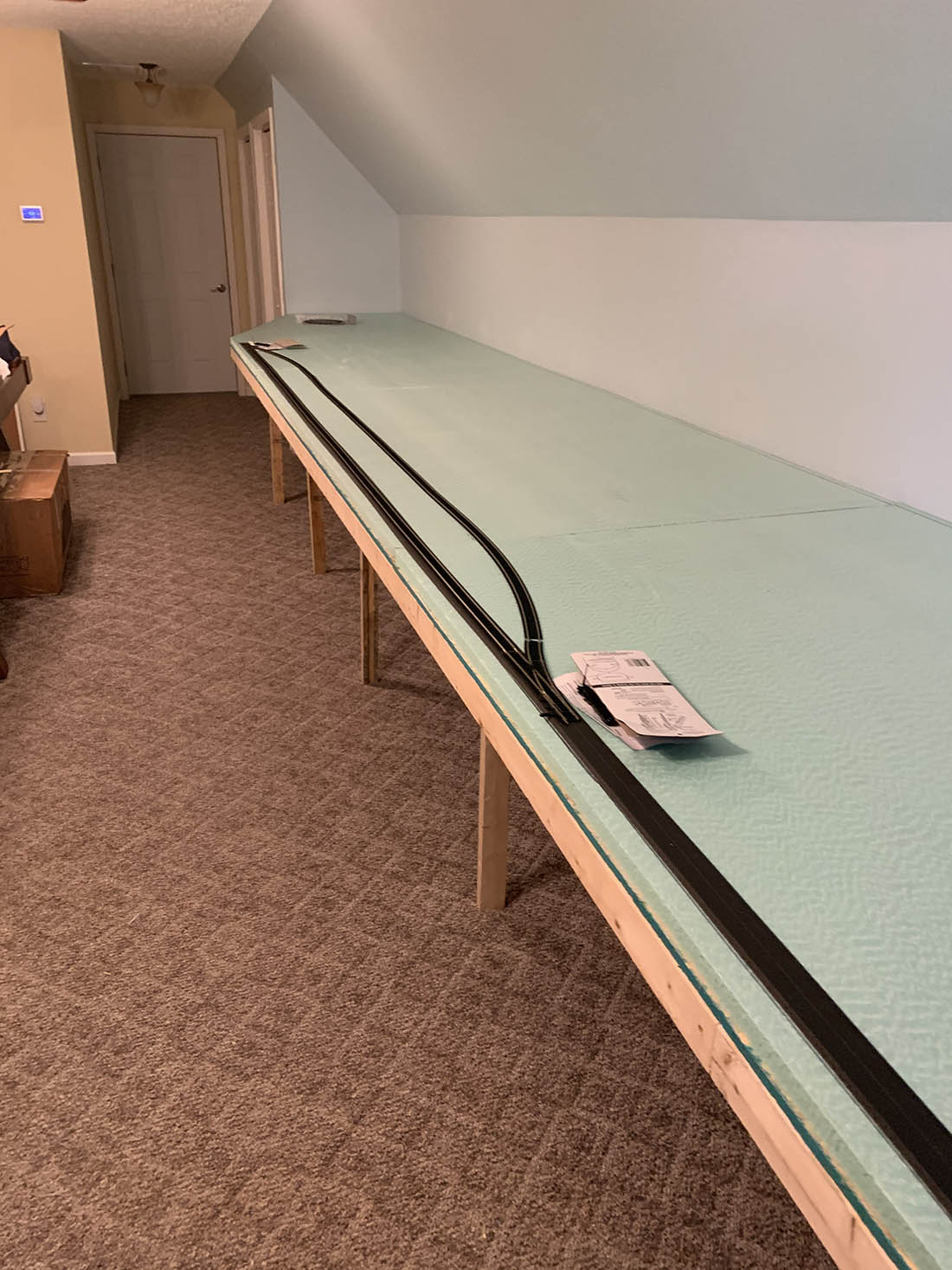 And it’s not just Walt, who has made a start, Clarke has too:

Two train operation, or single train completes entire route in about a minute. Probably adding a reversing trolley as well. 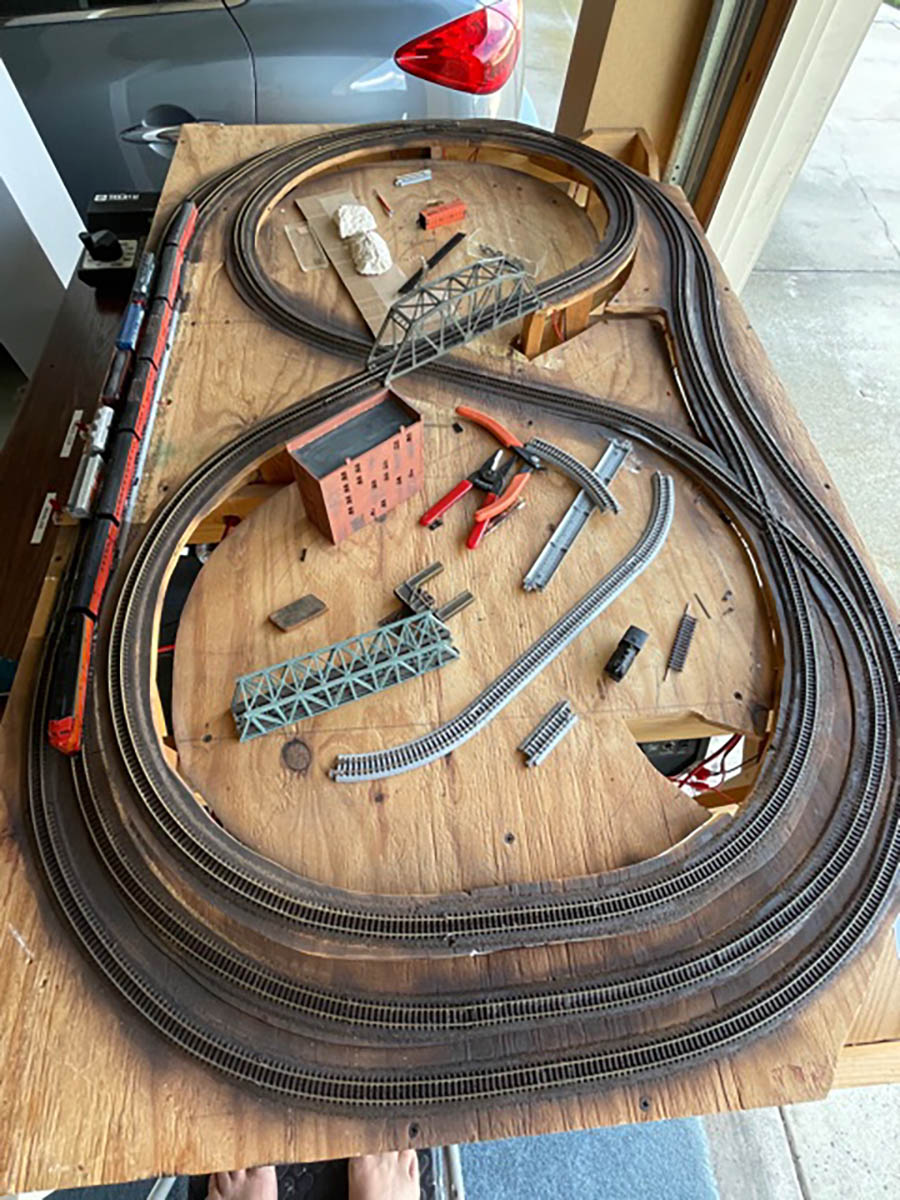 Next, Cassio has been back in touch again – it’s always good to hear from him – it’s wonderful to see the layouts from different corners of the world:

I send another movie in my Bragança Layout, with two Union Pacific type 4400 locomotives.

I do like to publish the pics of the folk just making a start. Sometimes there’s not much to see, but that’s not the point. Making a start is all that matters.

Sadly, it’s the start that stops too many of us.

And if you’d like to make your start on your layout, just like Clark and Walt, the Beginner’s Guide is here.