Getting started on your layout…

Jim’s been in touch again (his last post is here).

This time he’s sent in a camera train video of his wonderful layout:

I’m really less than a novice at this but I just wanted to share and contribute to your site.

And poor old Rick mailed me this:

“Due to exigent circumstances I had to get out of the radio control heli and drone hobby. I chose trains which I had never touched before in 60 years.

I did a ton of reading and studying and came to the conclusion that the Bachmann EZ Command DCC set would be the best entry level for me. All of my reading stated the #1 issue was track install.

Very carefully I did that and both of my locos ran like Swiss watches. I gave myself the set as a Christmas gift. This past Tuesday I was working on scenery while I had the locos running 45 foot laps. All was well in my small railway world.

I took Wednesday off and went back at it Thursday. Started again on scenery, put the first loco on the track, applied power, NOTHING. Neither loco would move.

I could hear the motors running but no go. I tried everything I could think of. Now its Saturday. Same scenario. My locos still won’t run. Cleaned the track. Tightened the underside screws. Nothing. NO GO.

WHAT IS WRONG? What am I doing wrong. Murphy’s Law. Any and all suggestions are welcome.

I have a layout that I keep changing (growing) my issue is I see so many great layout plans. How many times do people change their layout it takes me years to build one?

I have attached my latest loco (n scale) and sea port for interest. Loco is a 8200 found on east pulling coal that pass my way sometimes 3 in a row.

Port is made from paint and varish for water, crush cork for rocks, Boat is 3d printed, building is a mix of card and plastic leftovers. 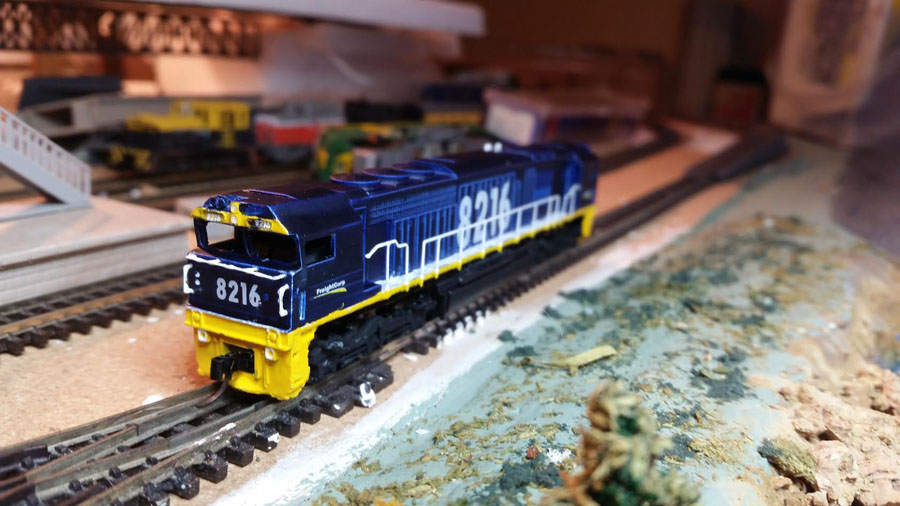 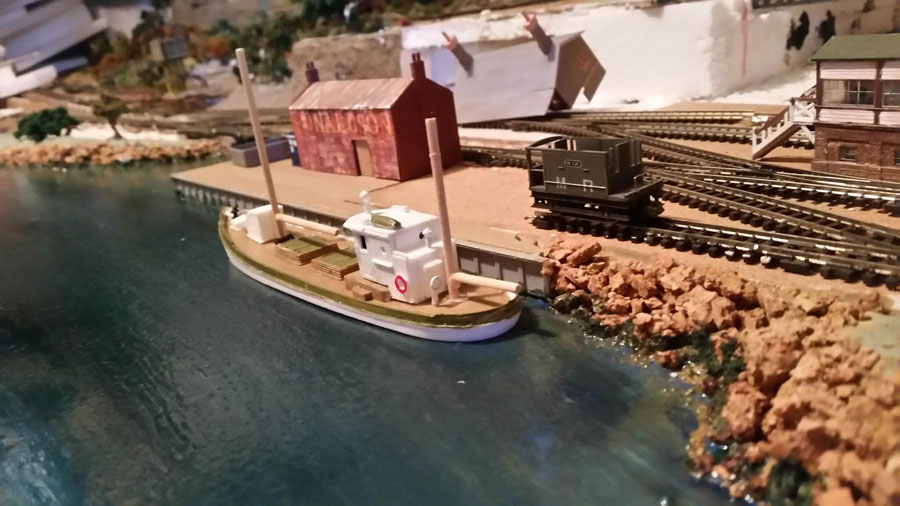 “I thought that you might find these photo’s interesting.

In the past I’ve commented on making your railroad with modules. I had a 22 by 12 foot railroad started in our basement when my wife decided we needed to move to a condo. We bought one with an extra 15 by 15 foot upstairs bedroom, closet, and bath.

the first three pictures show the parts as delivered. The forth shows them in place. It was putting a puzzle together. The new layout is much different then the old but all modules were saved.

The photos show a new 2 foot square module in the corner, a 2 by 6-6 in the front left and a 6 inch piece added at the base of the angular section. A new corner section is shown next. Lastly the layout is shown in its current state. Much is left to go, but modules saved much time and money. 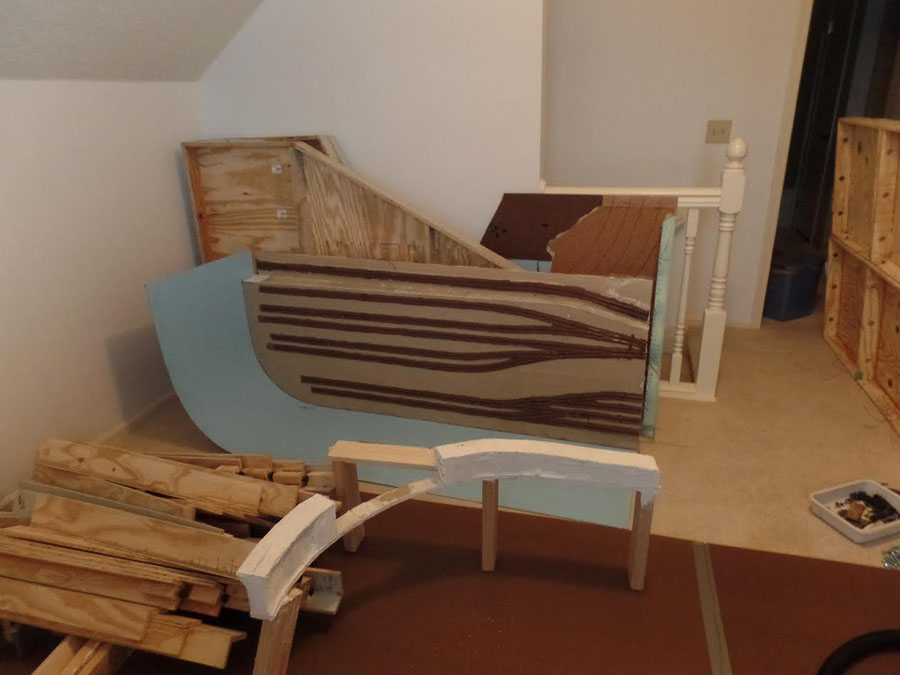 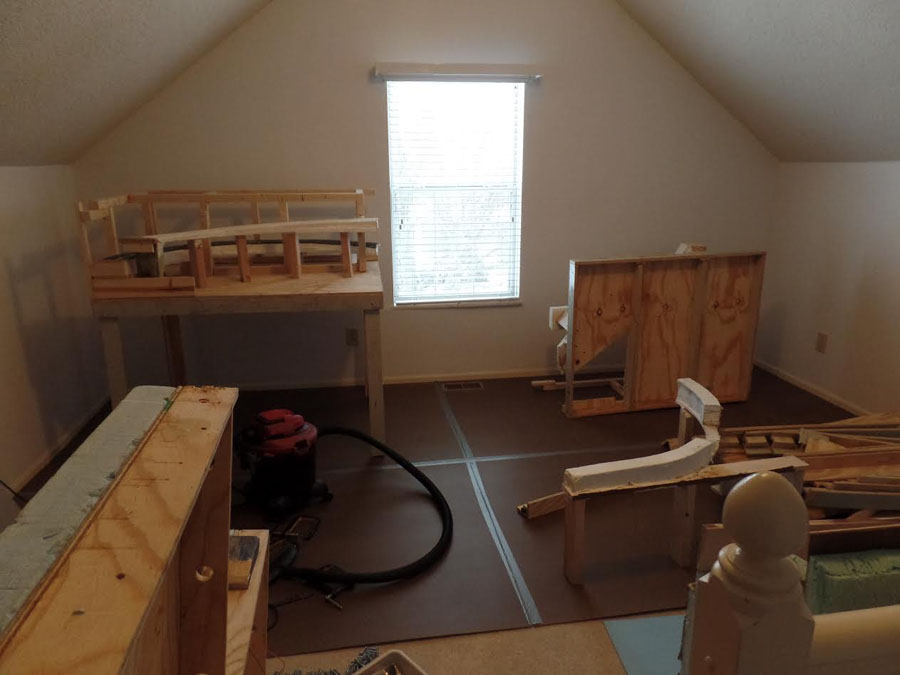 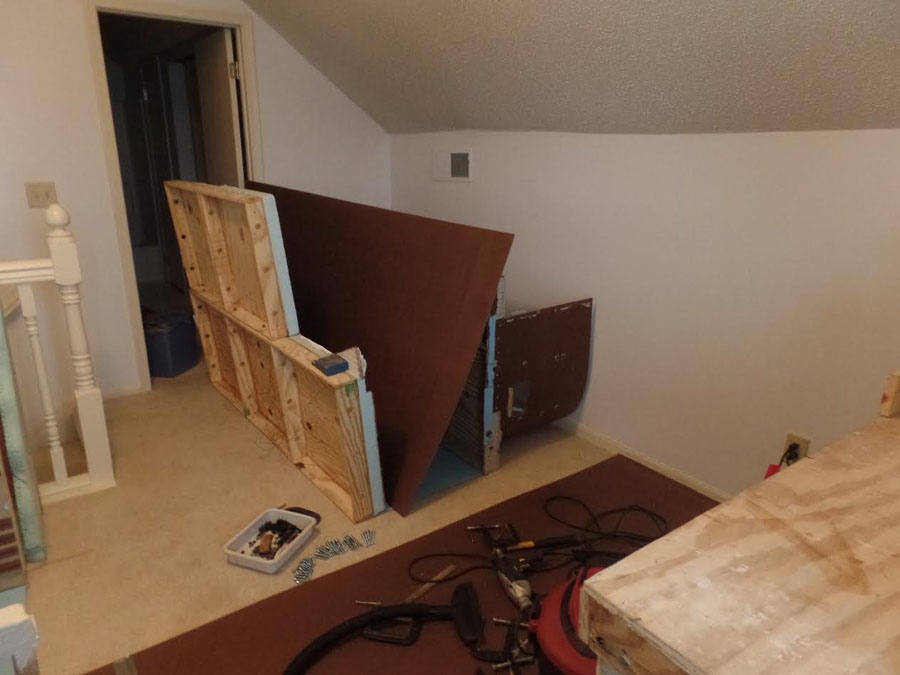 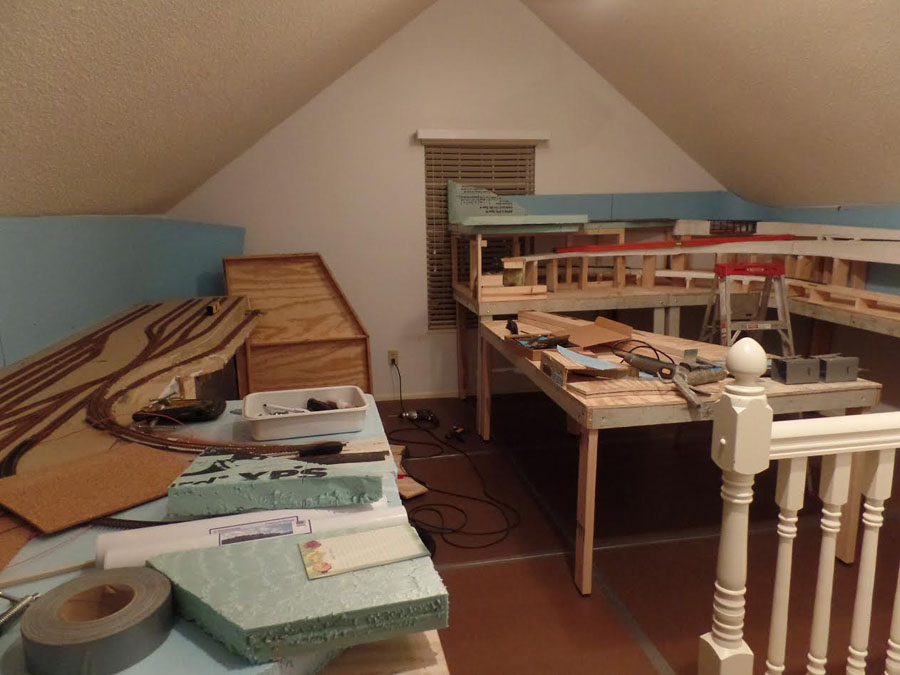 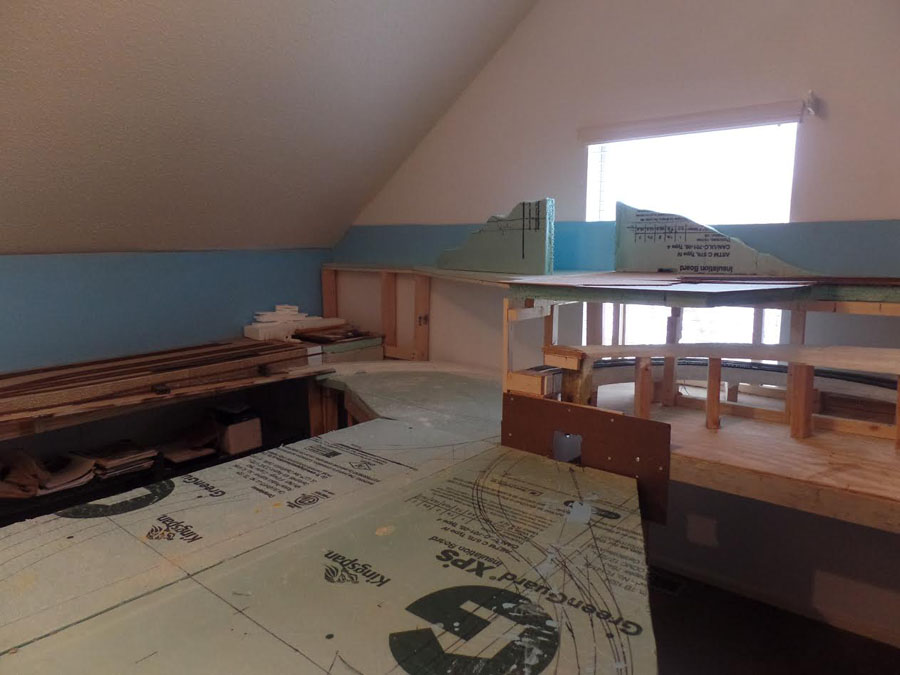 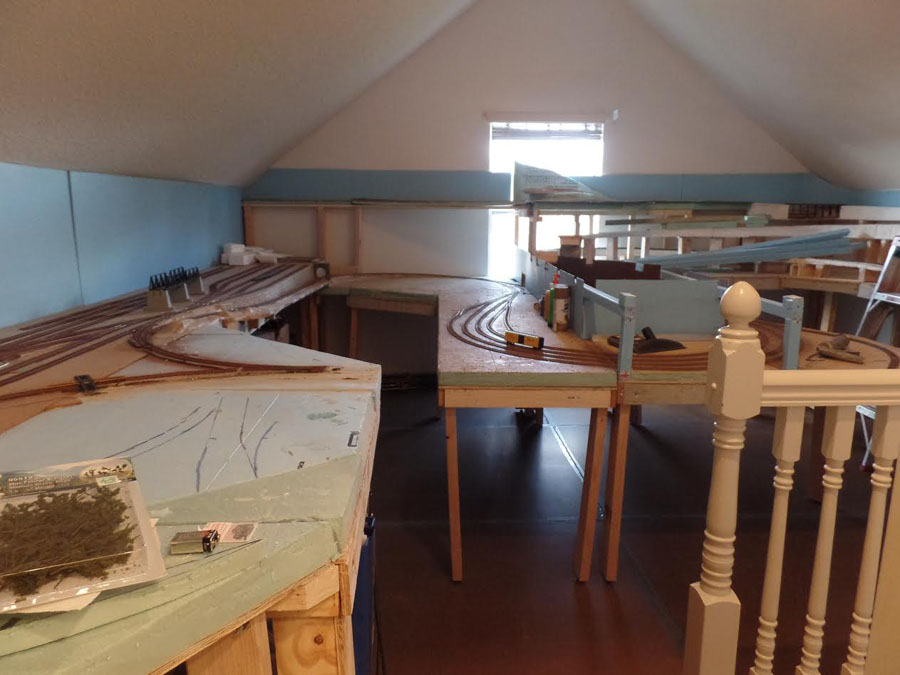 I never built a train layout before, even though for two years when I was 35 I managed the model train department of a large Model and sports shop in the north of England. 12 years ago I decided to build a layout in the loft of my bungalow after having it fitted out with a new floor, two velux windows, insulation and a wooden loft ladder.

I managed to build almost all of the base boards but no further . My wife was diagnosed with terminal Cancer and died within the month. I found that I could not live in the house any more and moved to an apartment. The woodwork had to be dismantled and consigned to a Skip when I sold the house. The track, locomotives, rolling stock,DCC control system had to be packed away in boxes and put in store.

7 years later I met a lady through an online dating agency and we became an item as they say. I sold my apartment and moved in with my new partner, taking with me all of the model railway gear and my precious tools. These all lived in the garage for 3 years until last September when we bought a house in Essex by the sea.

This bungalow had been kitted out with two upstairs loft rooms accessed by a wood loft ladder. Both rooms fully insulated and velux windows. At last I could start again and I am well on the way to build a large 12 feet by 15 feet layout . Track is now going down and I look forward to many hours of modelling. In the end age will stop me. I can shoot up and down the loft ladder well enough at the moment but in five years I will be 90.

I have this time built the layout in sections bolted together and the power bus will plug together so that dismantling the layout will be possible and each unit is small enough to get down the loft ladder when the time comes.

I have recorded the building process in pictures and I enclose a few.

One problem that cannot solve involves the triangle junction that connects the folded oval to the terminal station. I have purchased two Hornby reverse loop modules, but I,m not sure where to install them.

Can any one help? 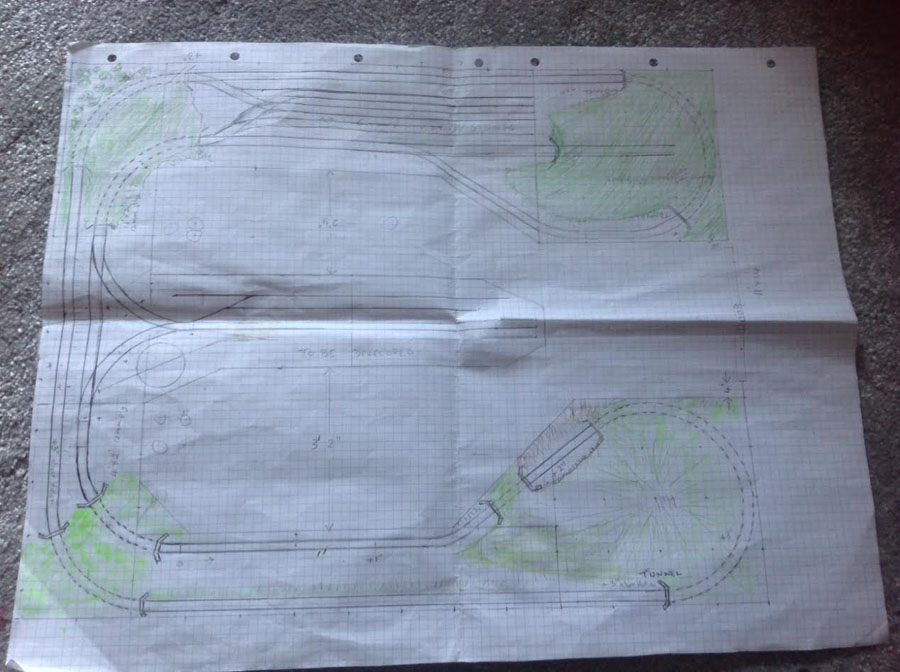 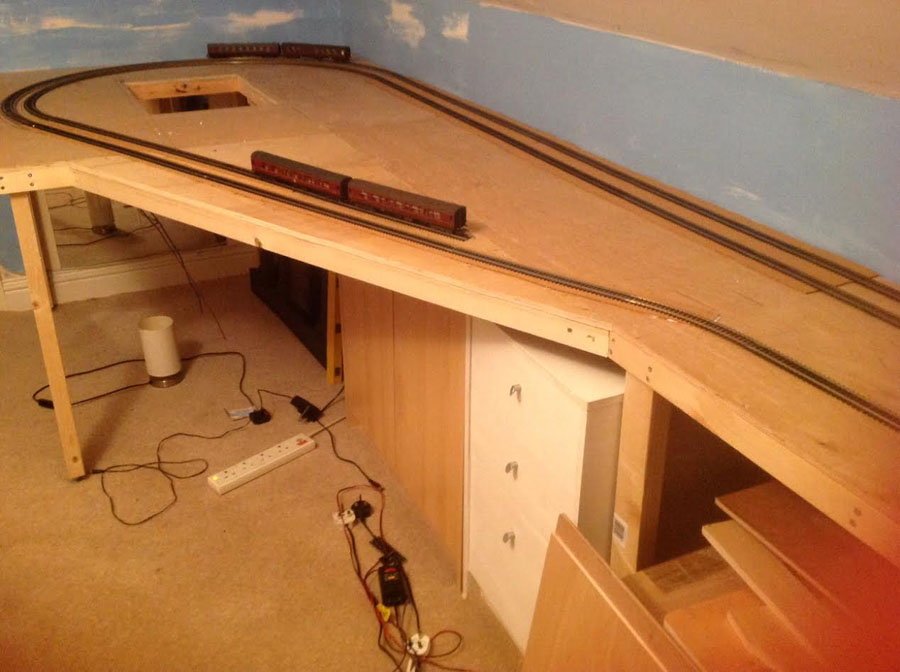 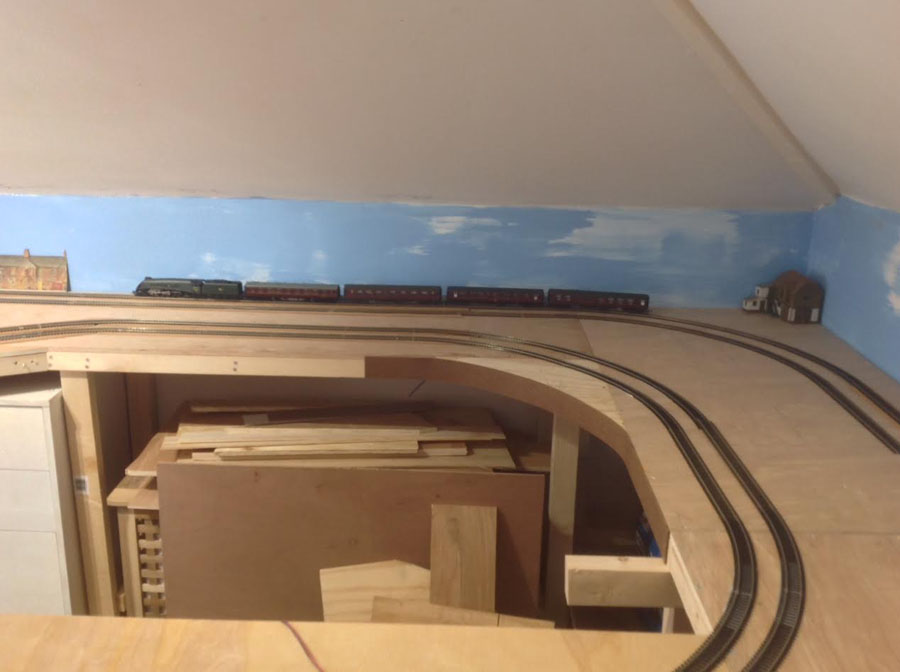 My word – a big thanks to Mike for sharing his story – and it does just go to show, you’re never too old to start a layout, no matter what you’ve been through.

And if you’re still mulling over your layout in your head, the Beginner’s Guide is here.

28 Responses to Getting started on your layout…