It has been a long time since I have posted anything on you web page, however I have some exciting news to share with everyone.

This is Jim Volmer Sr Starrpoint RR from across the big pond in Buffalo NY. It has been nearly two years since I was able to work or run trains on my layout, been very busy with remodeling my house by myself, and now it is almost complete, so it is now time to work on my adventure.

You may remember layout, Starrpoint. Here is a drawing of the old layout. 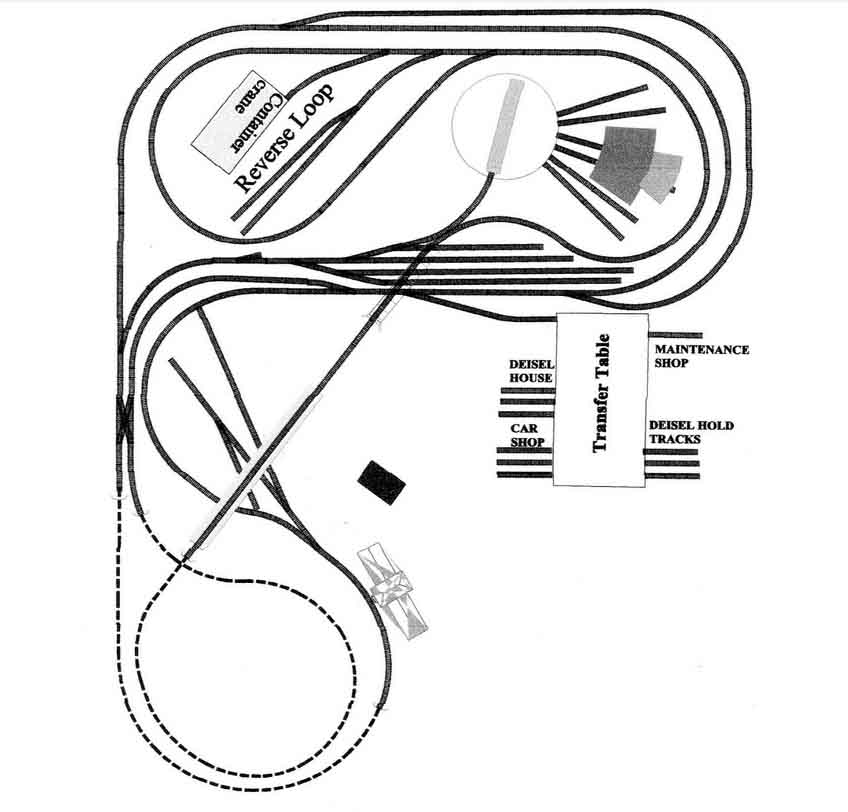 I was having an issue with trains going through the mountain to access the rear of the layout. This was very frustrating. I tried to fix the issue but it never worked.

As I was working on my house remodel job, I was contemplating what to do about the layout. So in my spare time from the house work, I decided to redraw a new layout.

I could not for whatever reason, make CadRail do what I needed. So I went on line and found a new model railroad design software called S C A R M ( Simple Computer Aided Railroad Modeler ). I never heard of this cad program before, but after examining it for a couple of weeks I found it most interesting to work with. So with that in mind I drew what is now going to be the new Starrpoint RR. Here is the drawing of it: 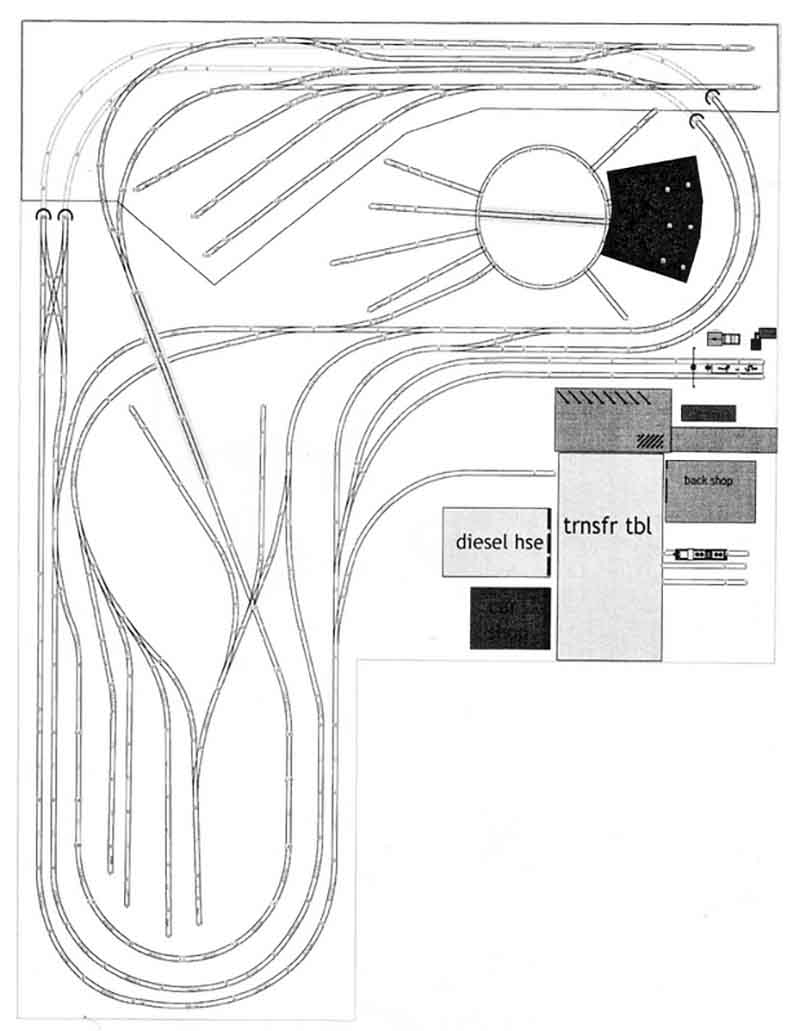 The new layout is the same table footprint as the old layout.

The diesel and turntable facilities are remaining where they are.

The old mountain is gone; a new upper area will be in the rear of the layout.

On the lower level there will also be a town with a station, new fiddle yard and delivery tracks to industries.

I estimate it may take two years to complete the entire process, from removing the old layout and constructing the new layout.

As time goes on I will send updates on the progress.

“Not sure if this is useful, but another source of LED lighting modules could be old used up LED bulbs that have ceased functioning. The mini LED array within is generally in good shape and can be extracted and used in a layout. 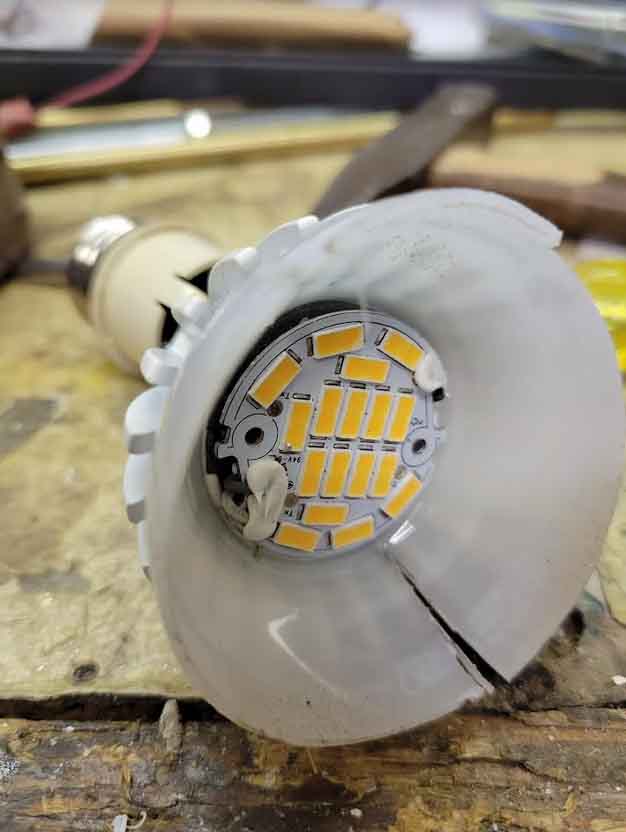 The individual leds on the module have a threshold of 1.9Vdc as the 1st picture below shows one lit up.

The maximum voltage approaches 3Vdc but it is too bright to look at.

I would suggest using a well regulated power supply adjustable between those two voltages to produce a variety of lighting effects, though the higher voltages will reduce the life expectancy of the led. 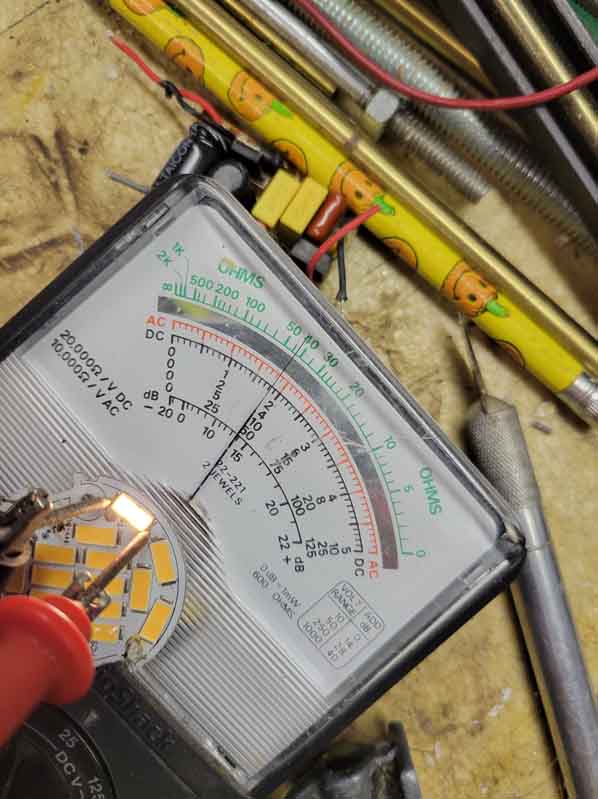 The removal of the module required a band saw for the housing (watch your fingers) a small screwdriver and a small wire cutter.

I haven’t tried to remove the led from the backing yet.


Now on to Steve:

I’m a newbie, just retired from a career in TV news in Detroit, Michigan.

I now have time for so many things I enjoy, including model railroading.

I’m excited to start a new layout after a 40 year hiatus.

I’m not great with the intricacies of track laying, wiring, switches, etc… but I love making scenery.

I decided my new “railworld” must have a TV station.

So, here is my first I’m also adding a scratch built Little Caesars Arena so my citizens can go watch the Red Wings play hockey.

My little railroad won’t be much more than two concentric ovals, but I’m already having fun, and as you often point out, that is the whole point.

Thanks to you and all of your members for so many great tips and tricks to get me started. 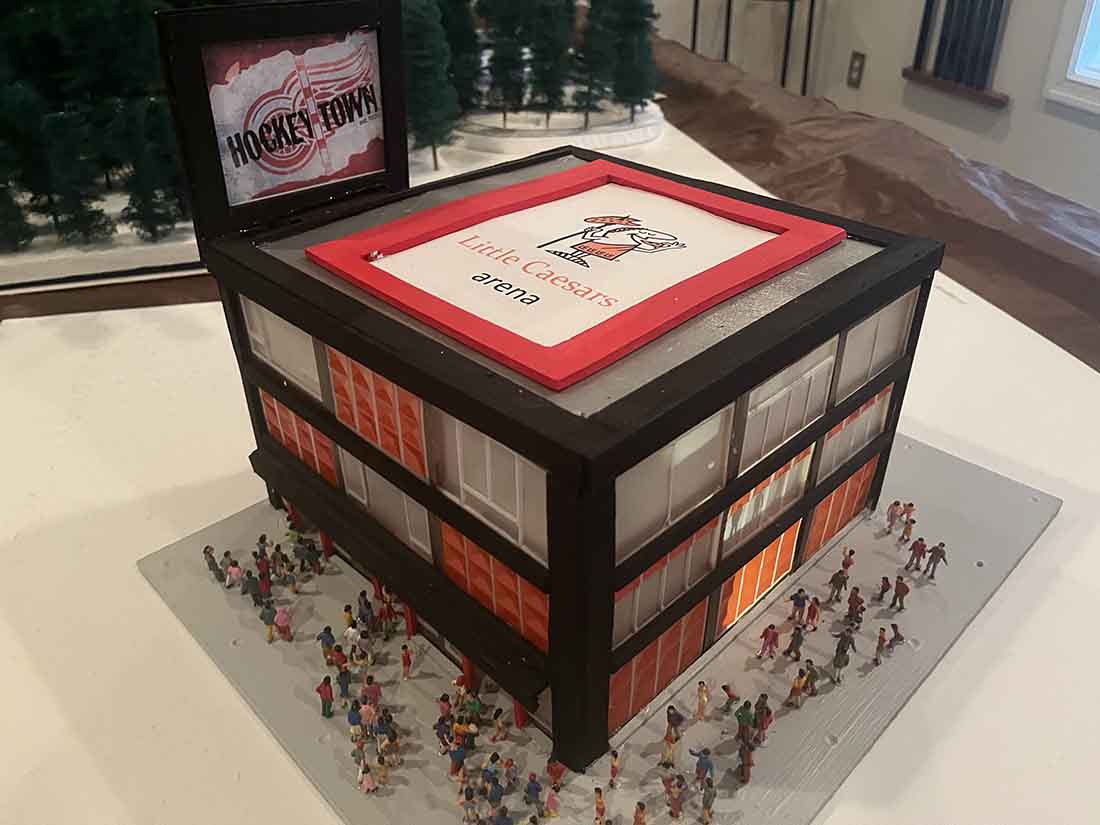 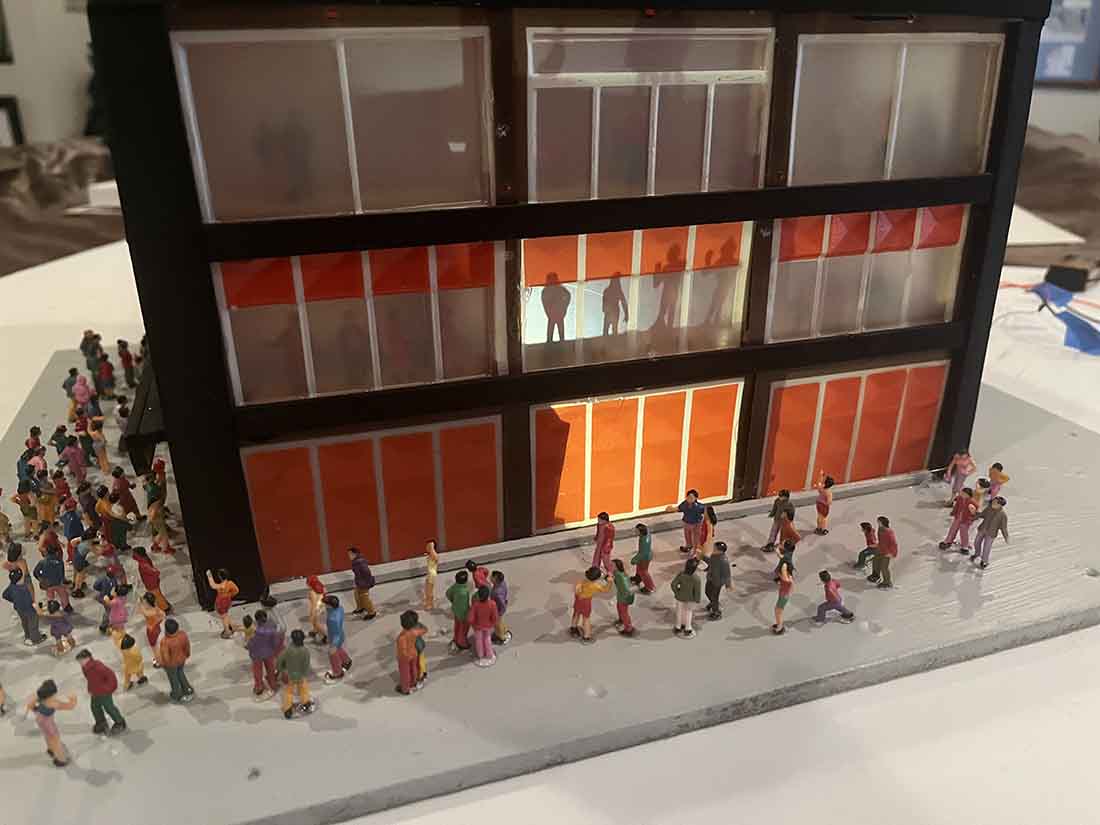 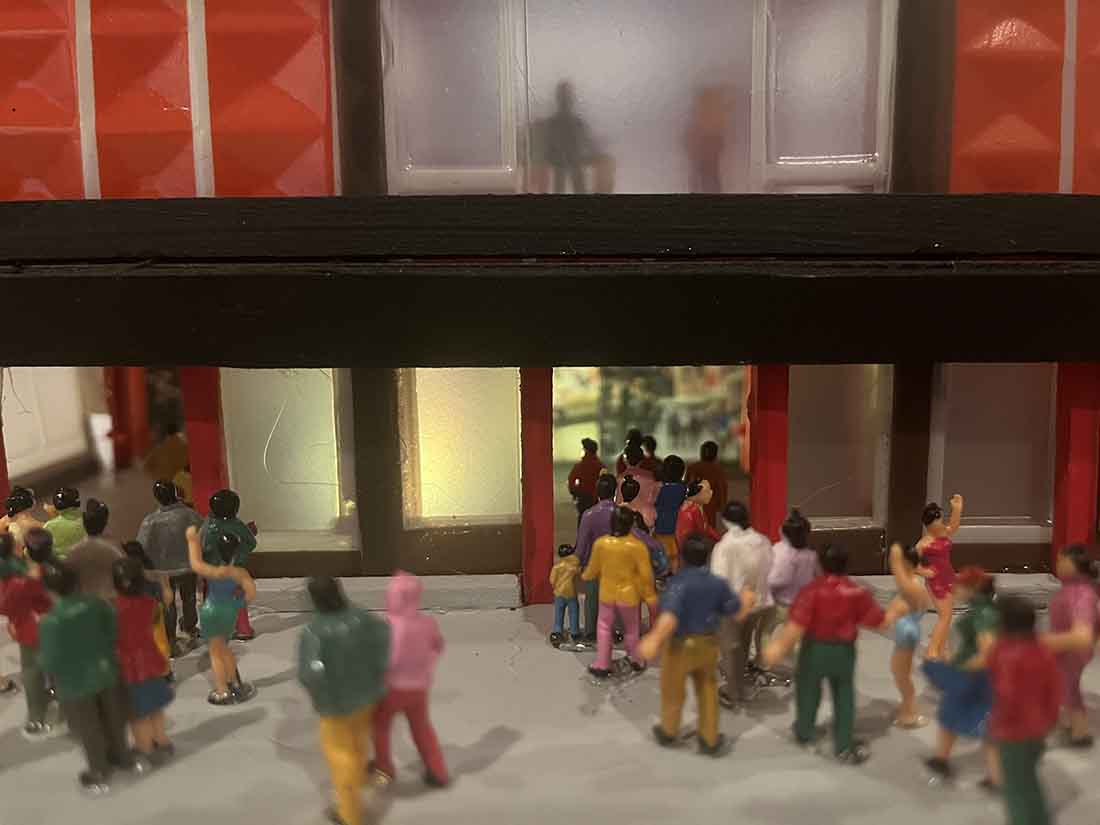 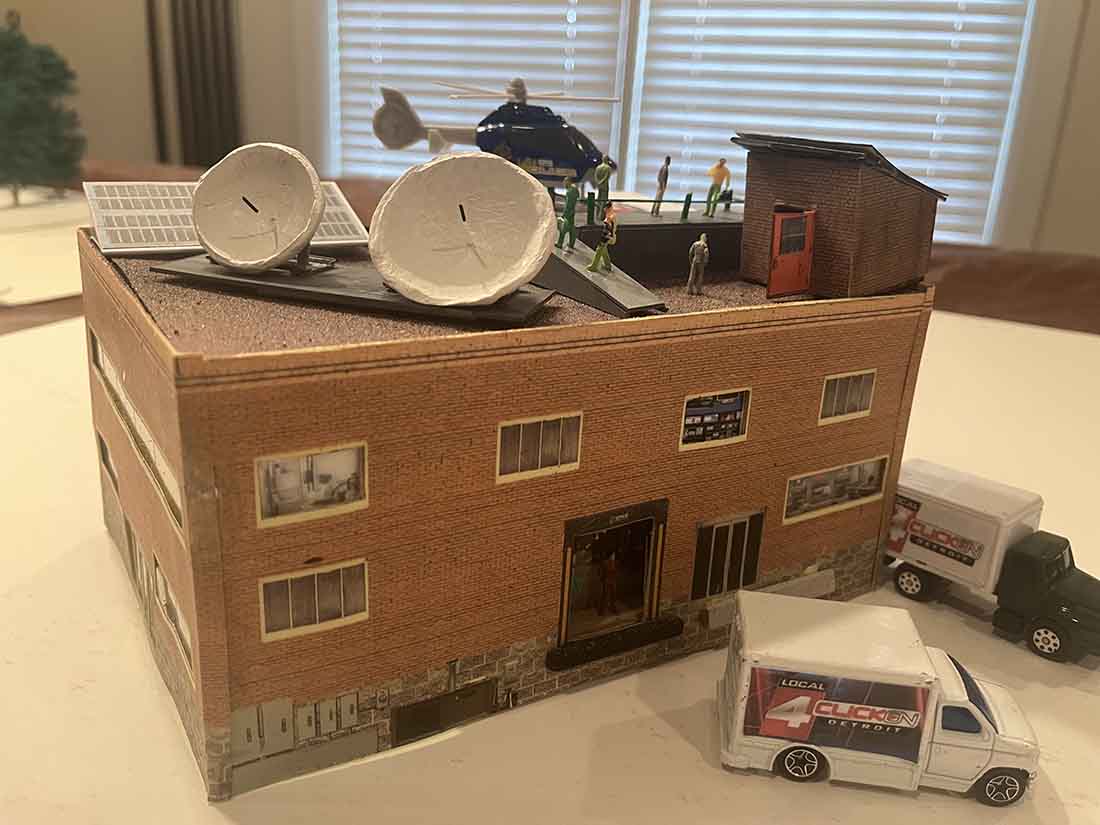 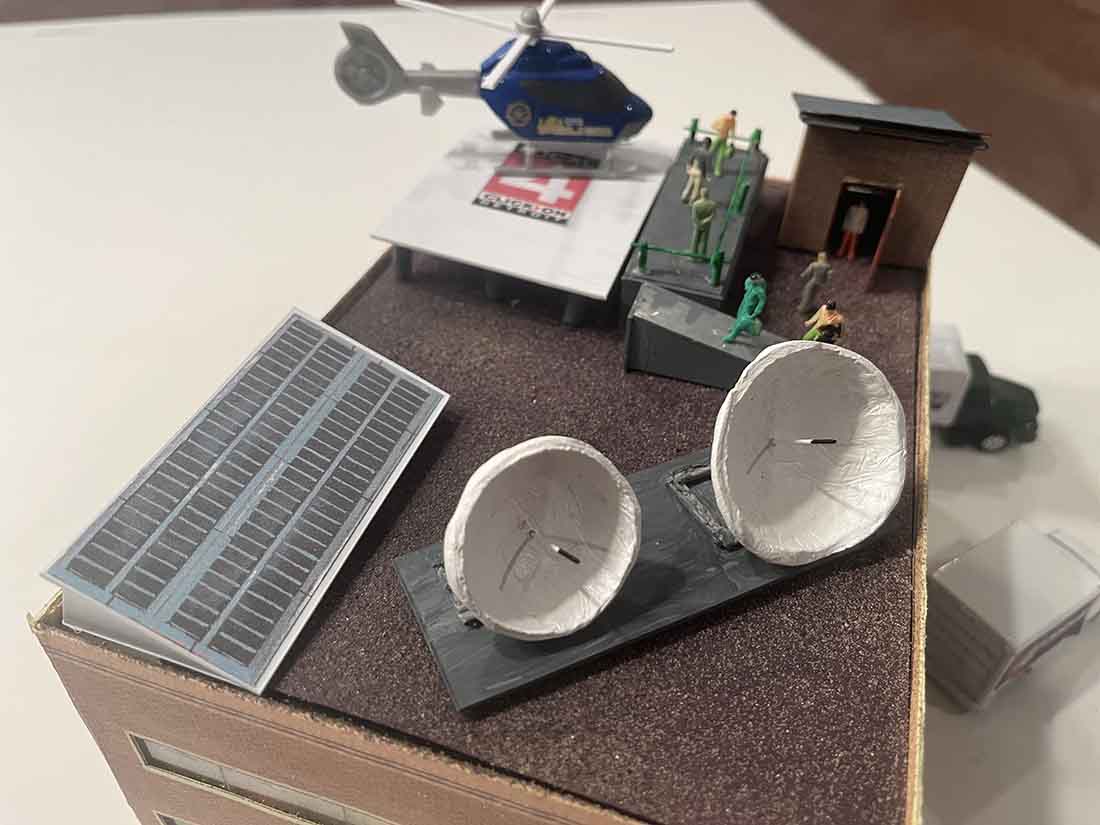 Thank you for your time putting out this newsletter.

I wanted to share the progress on my pike.

The attached pictures are of the room which is about 700 square feet.

The long leg is about 35 feet long then a 10 foot across then down 25 feet before it turns back.

I’ve laid the cork and painted everything with “dirt” colored flat paint. I learned on my last layout that if I cover everything with dirt paint then I don’t have to use as much ground cover.

I have the track laid. I working on getting all the joints smooth. I have DCC connected for testing. So far engines run smooth.

All update as I go along.

My layout is in the attic.

If you want to share this it is ok with me. 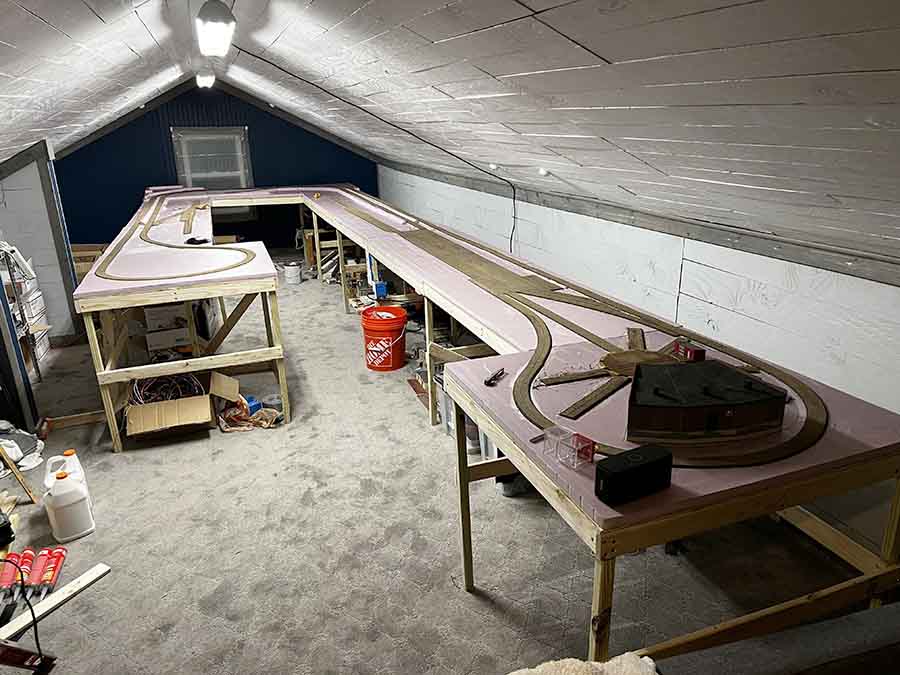 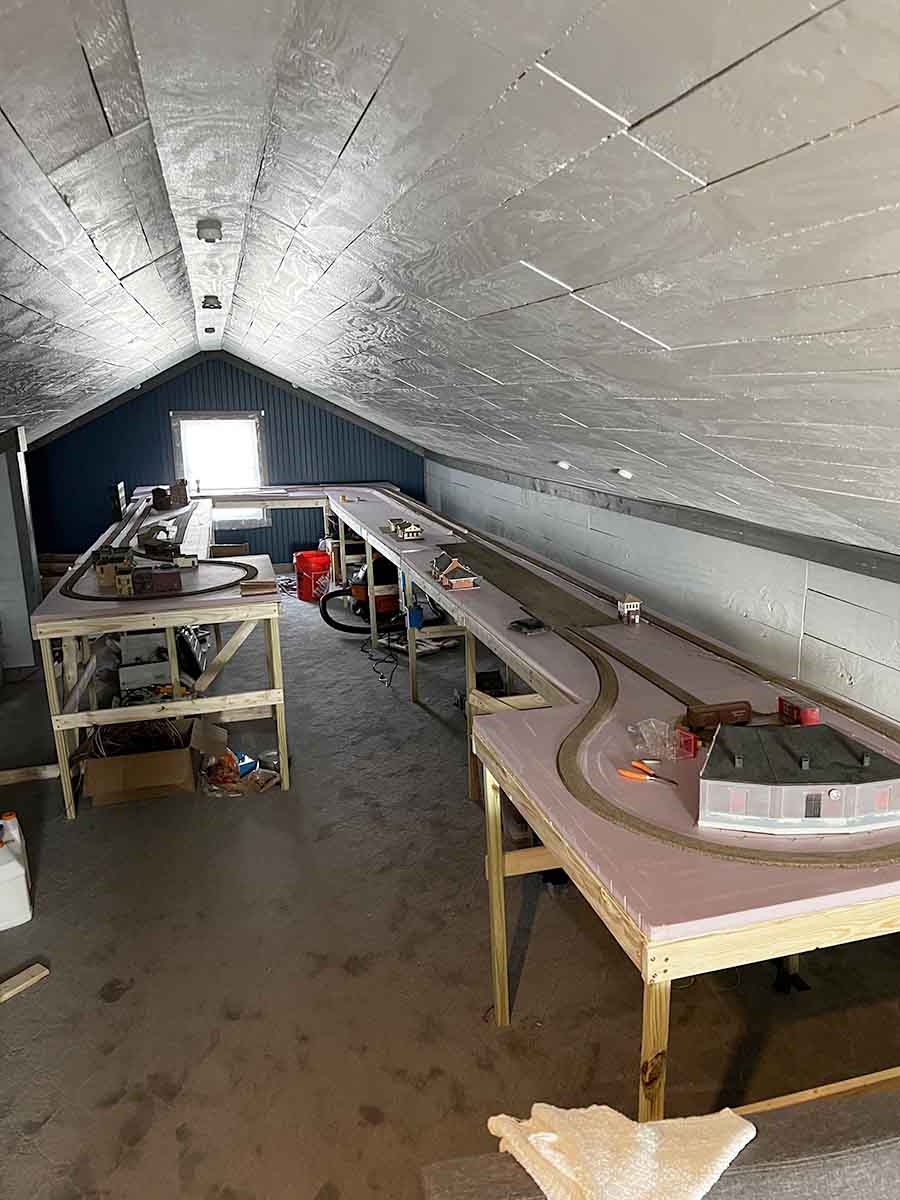 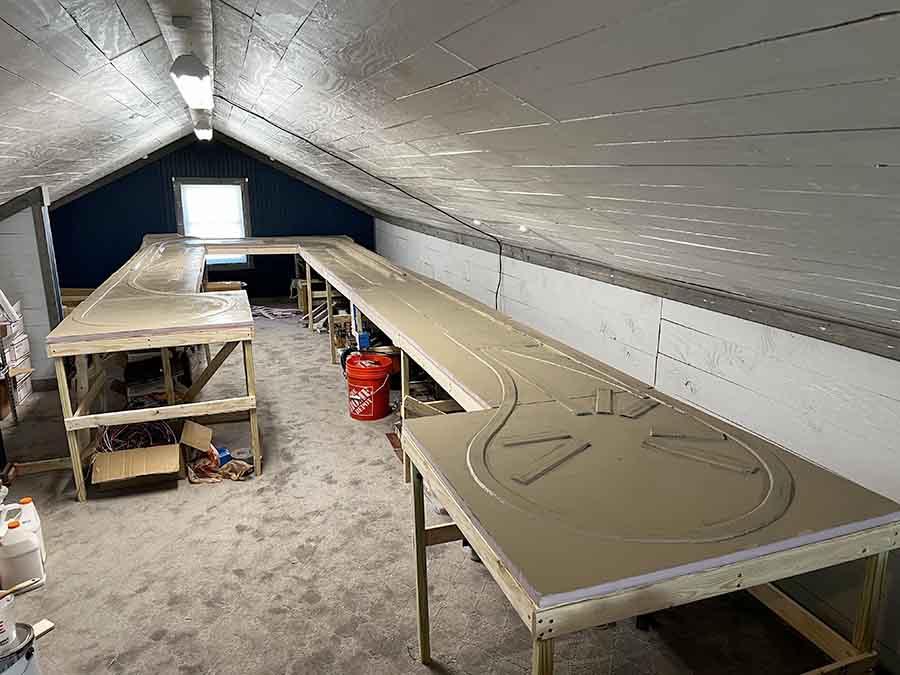 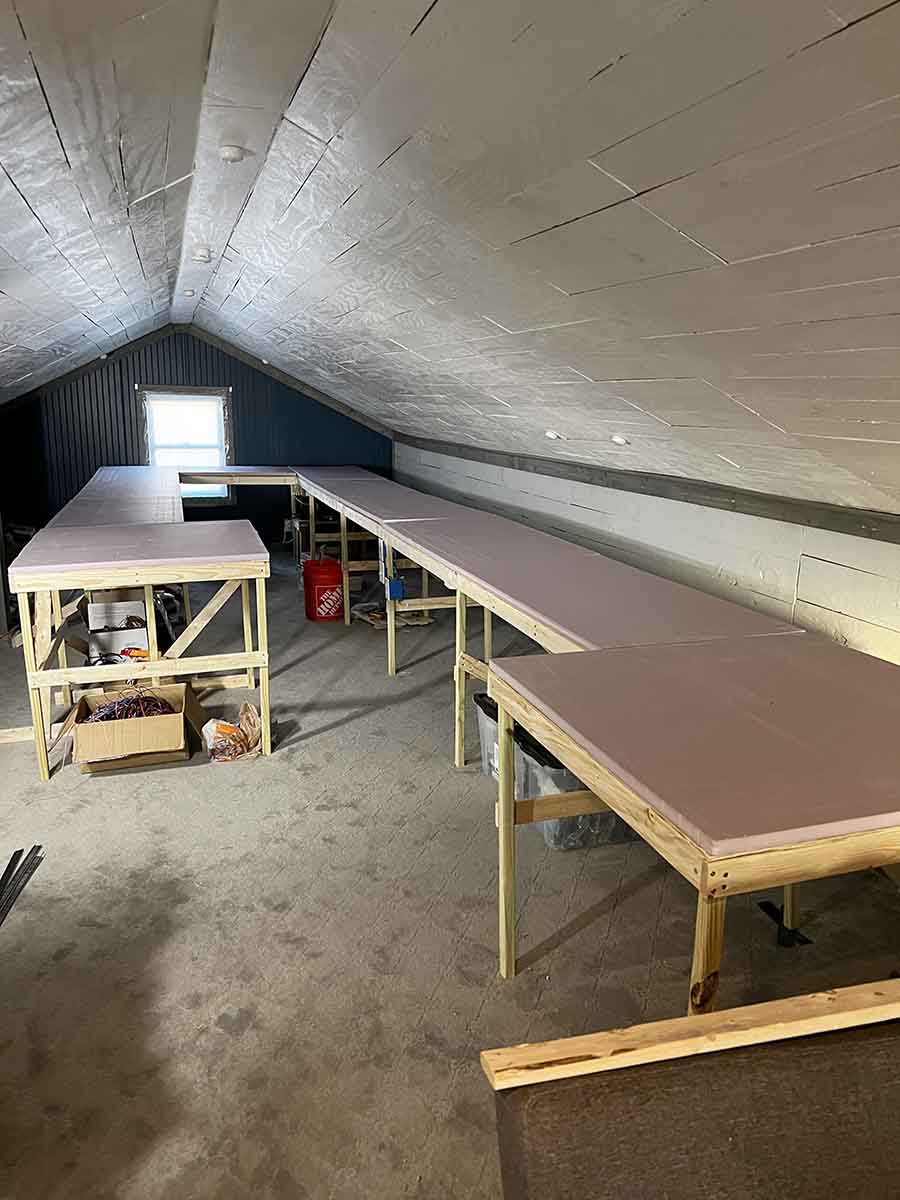 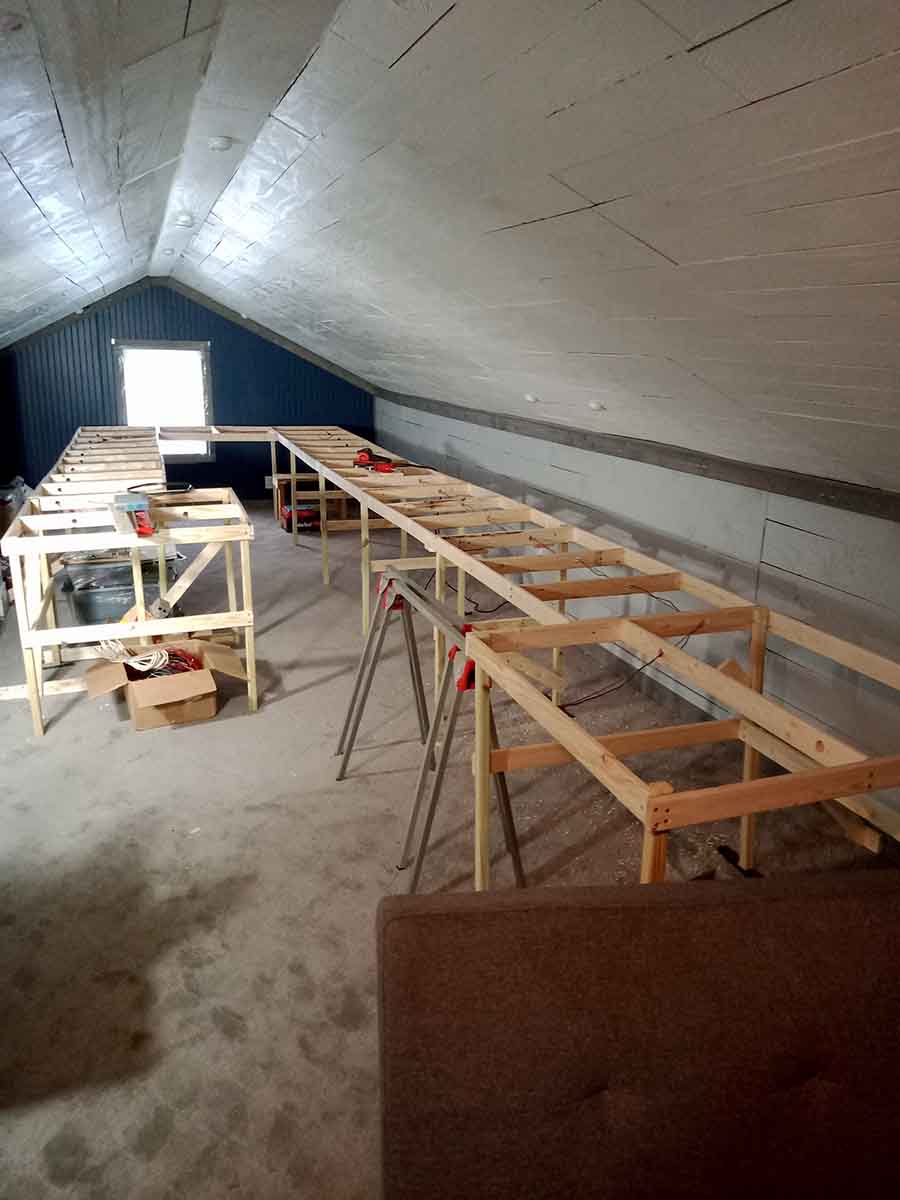 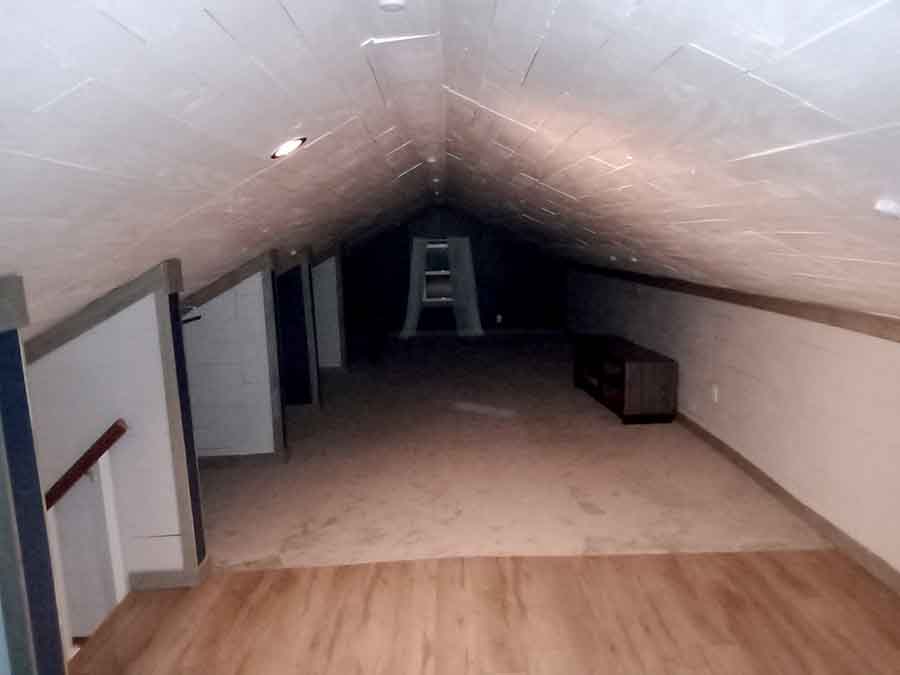 A huge big thanks to everyone.

I’ll carry on posting half built layouts and scratch builds, because this hobby is all about making that start and having fun, as Steve points out.

I couldn’t agree with him more!

And if today is the day you decide to get going and want to take those first few steps, the Beginner’s Guide is here.