It’s been one of these weeks for me.

You know how sometimes you feel the whole world is against you and nothing goes your way?

Running the site has been bit of a handful this week and I have to say I got a bit down about it.

But do you know what? That lasted about 5 minutes. Two things cheered me right up.

After I flicked through the site and read some of your kind and thoughtful comments over the years, it gave it all some perspective.

So I’d just like to start today’s post by saying thank you to each and everyone of you for making the site what it is.

And I really do mean that.

Secondly, Old Taz got back in touch.

(Old Taz’s last post is here, if you want to get up to date.)

If his narrative doesn’t put a smile on your face, I don’t know what will:

My layout is n scale and it’s called Whiskey Run.

It’s been a while and I hope everybody is in good health. I’ve been reading and watching all of the posts.

It seems like everyone’s getting along well and having fun. There’s a lot of wonderful layouts on your site.

If you remember, we built 2 stills in our mine and that’s why my layout is called Whiskey Run instead of Tinker Ville.

We are still running one still in the mine, just for our own relaxation. There’s been some additions since we last talked.

The undertake, Will Barry has started a used car lot so, now, he can sell you a used car or a plot of ground. I’ll tell you though I think his wife sells more cars than he does. What a knockout.

Then there’s Frank Forter. He owns the drive in next to the car lot which is called Pig Out. Frank owns the pig farm east town. Thank gosh it’s east of town as our wind comes out of the west.

Frank uses all of the pig except (you thought I was going to say squeal, didn’t you?) No, it’s the tail. The squeal is what he plays over his loud speakers.

He has pickled pig’s feet, knuckles, deep fried ears for the dogs, roasts loins and whole hogs. He also will come to your party to roast on site. His shop was an ice cream shop. The owners found out they couldn’t sell ice cream in the winter time, so they went back to California and left large debts. Frank paid off the debts and is making a going business of selling his own pigs.

Ernest came too and worked in the mine until they found out he could repair anything. Several friends set him up with his machine shop. One day a couple of the miners played a trick on Ernest they brought a pocket watch that hadn’t run in years to fix. After they gave it to Ernest, he tripped going in to shop and dropped the watch. It started running and he just put it on the shelf waiting for them to come back.

When they came back get to watch he charged them $10.00. And told them they wound it too tight. The watch probably only cost $3.00 when it was new. The miners haven’t bothered him since.

The sawmill has added a lumber yard. Tall Paul is letting his son run the lumberyard and shipping yard.

Tall Paul took a freight car back east. We are not sure way but he kept talking about Somone by the name of Bab. We think it was a lady he knew. Said they were making Bab work in the iron mines. He said he wanted to bring Bab out here with him? We’ll see.

The filling station on the highway coming into town is owned by Speedy G. He also owns the oil depot down the highway. It is called Gonzales Oil.

Speedy is out of Mexico. He has 5 boys and 2 girls running the filling station for him. This is the full-service station. When you pull in there, they check the oil, the water, the air in your tires, and wash your windshield they also check out your teenage son or daughter depending on who’s doing the checking?

They have a U-Haul service and a wrecker service. When was the last time someone checked your oil, water, your air, and filled your tank with gas? I will Bet there’s some of you’ve never had that happen! (I had a 1929 Hupmobeal that did not have a dipstick. It had a float with a wire sticking out of the block. It was fun to ask to have the oil checked. Just to see the frustration on their face.)

The salvage yard is something new. The Twix brothers came back from the service and decided to start a salvage yard with all the junk that’s laying around on every farm around here. They bought a crane, a duce and a half, a Jeep and a 3-quarter ton truck, from army surplus to start their business. They have cleaned up a lot of farms around the town and paid off their debts already.

(Crane as an Electro magnet, it raises the magnet up and down and the crane moves side to side. You can load the gondolas with scrap iron with this crane. The dozer goes back and forth to Push scrap iron to the crane. I built the joystick from scratch. I also made the Electro magnet. All is wired to my control box.

At this point on the work bench, I am lighting all of the cars and trucks that are going to be on the roads.

The cars all have one light in them and I’m using fiber optics open it out the headlight and tail lights, then I put a thin coat of red paint on the tail lights.

The trucks I have small lights for headlights and tail lights.

The roadway will have 3 strips of copper tape one centered and once centered to the outside of the road. These will be painted then when the car or truck is placed the paint can be removed. Then the pickups on the cars and trucks will be soldered to the copper tap. (See test photos.) after ruining 2 dozen cars I think I found the easiest way to do the best. These are resin poured cars. Now I have more cars for my junkyard. I will let you know how they come out when I’m finished.

Have fun and like my mom and dad would say. If you have nothing good to say don’t say anything!!! 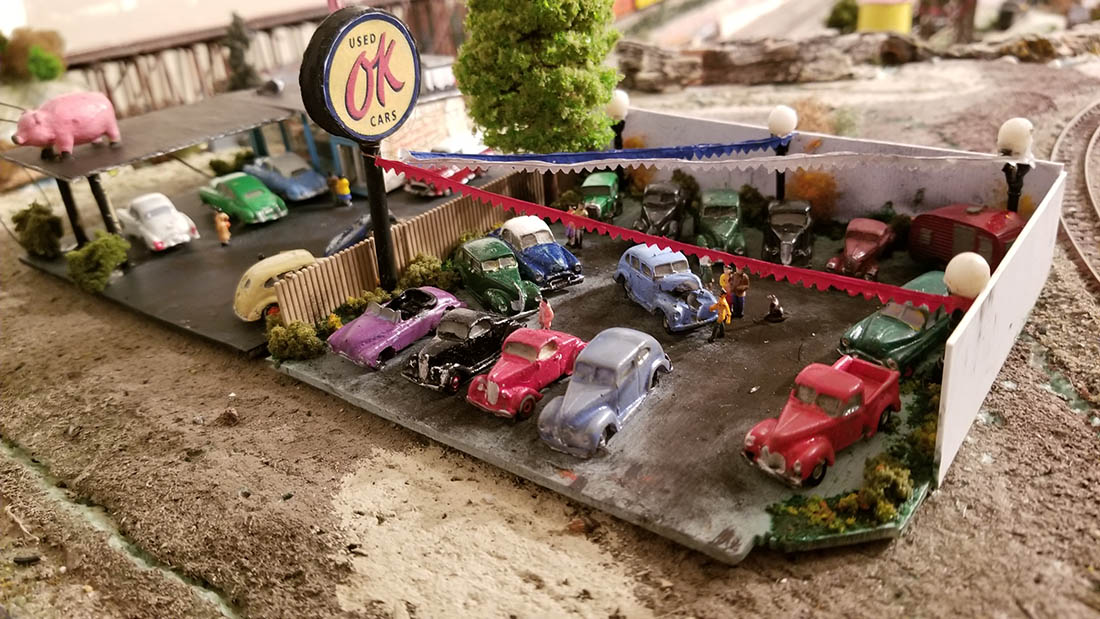 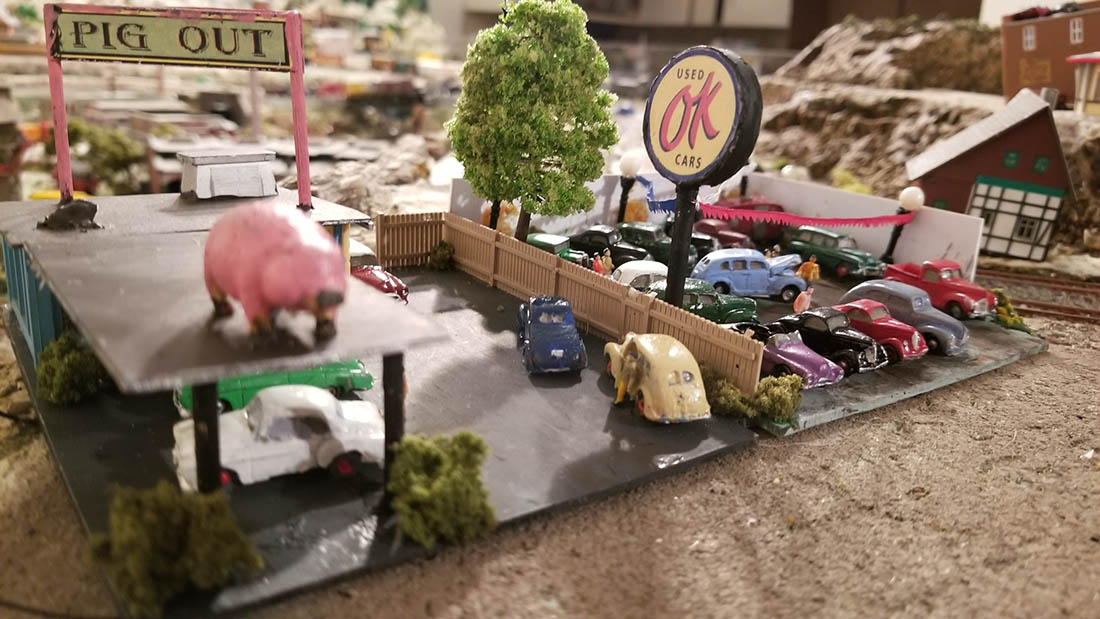 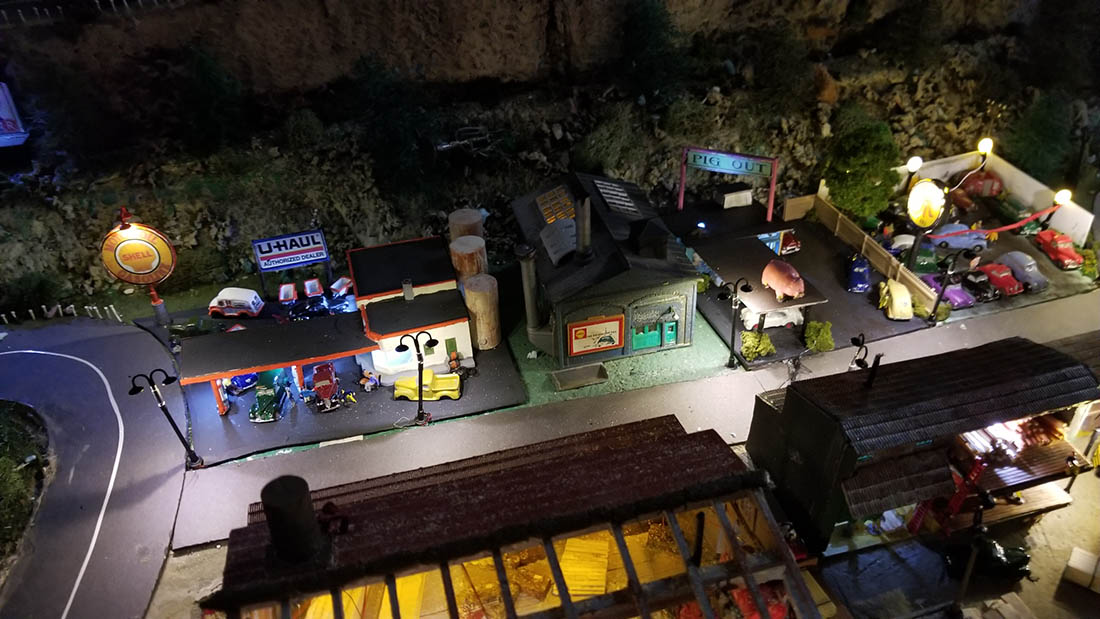 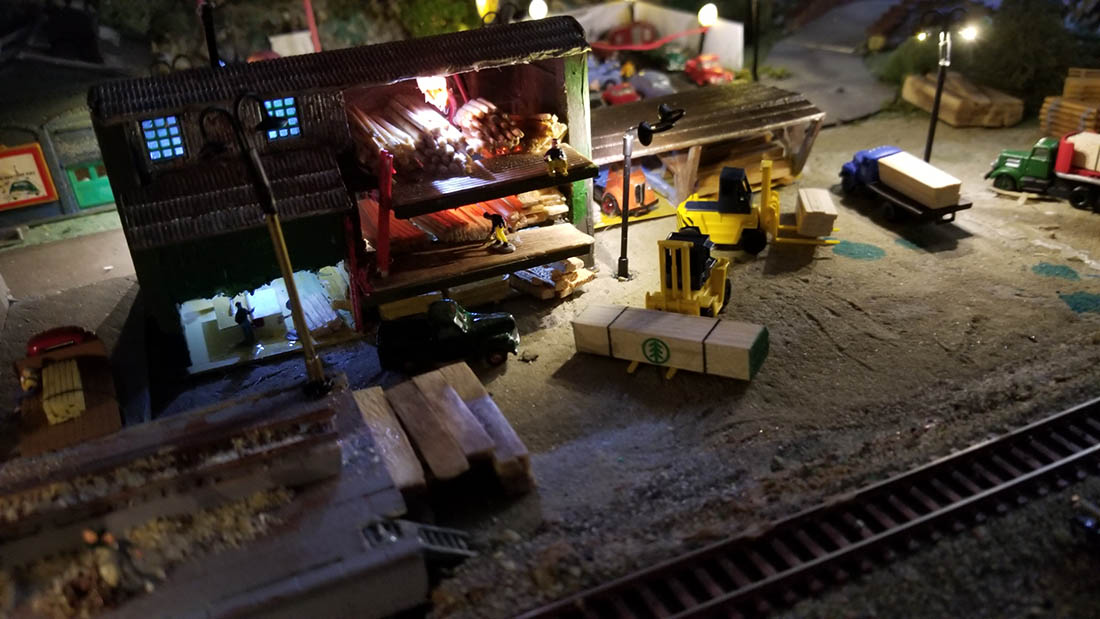 A big thanks to Old Taz for these pics and such a fabulous narrative – they put a big smile on my face.

PS Got a question that you want answered? Mail me and I’ll post it on the forum.