As a follower of your posts for the last couple of years, I thought I might show you my progress, so far, having been given a “Flying Scotsman” for my 70th birthday, two and a half years ago.

I started up with a blank canvas building a L shape in the family room of our Adelaide, South Australia home. After a year, I realised that the space wasn’t big enough, so I convinced my wife we need a “sea change” and moved to Victor Harbor, again in South Australia which had a room just the right size for a larger set up, so dismantle what I had built and start again in our new home.

This time it is a U shape, with the sides made up with 8 feet X 4 feet sheets and the bottom (or top – depending how you look at it) measuring 9’ X 4’ and a 1’ walkway in between. I bought a stack of Aldi Multi-purpose supports when they were half price, made the frames with 3×2 structural pine and the board is Marine ply.

I am working on Era 3 UK and all my locos are Hornby OO. There are 2 tracks operating on DC around the outside and the inside line is DCC and splits into 2 after main station where one goes under the mountain (to be built) and the other around the front of the mountain.

The mountains are under construction out in the shed, at the moment as are many of the buildings. I am finding it difficult sourcing many of the specialised buildings and structures in Australia as stocks run out and are not being replenished from overseas very quickly, due to the COVID-19 virus shutdowns.

I attach some photos -The first 3 are my original start of the layout, the next 2 was the new layout as it stood in April, the next 2 as it stands today and the last is my control desk (work in progress).

I will of course keep you informed as I progress. 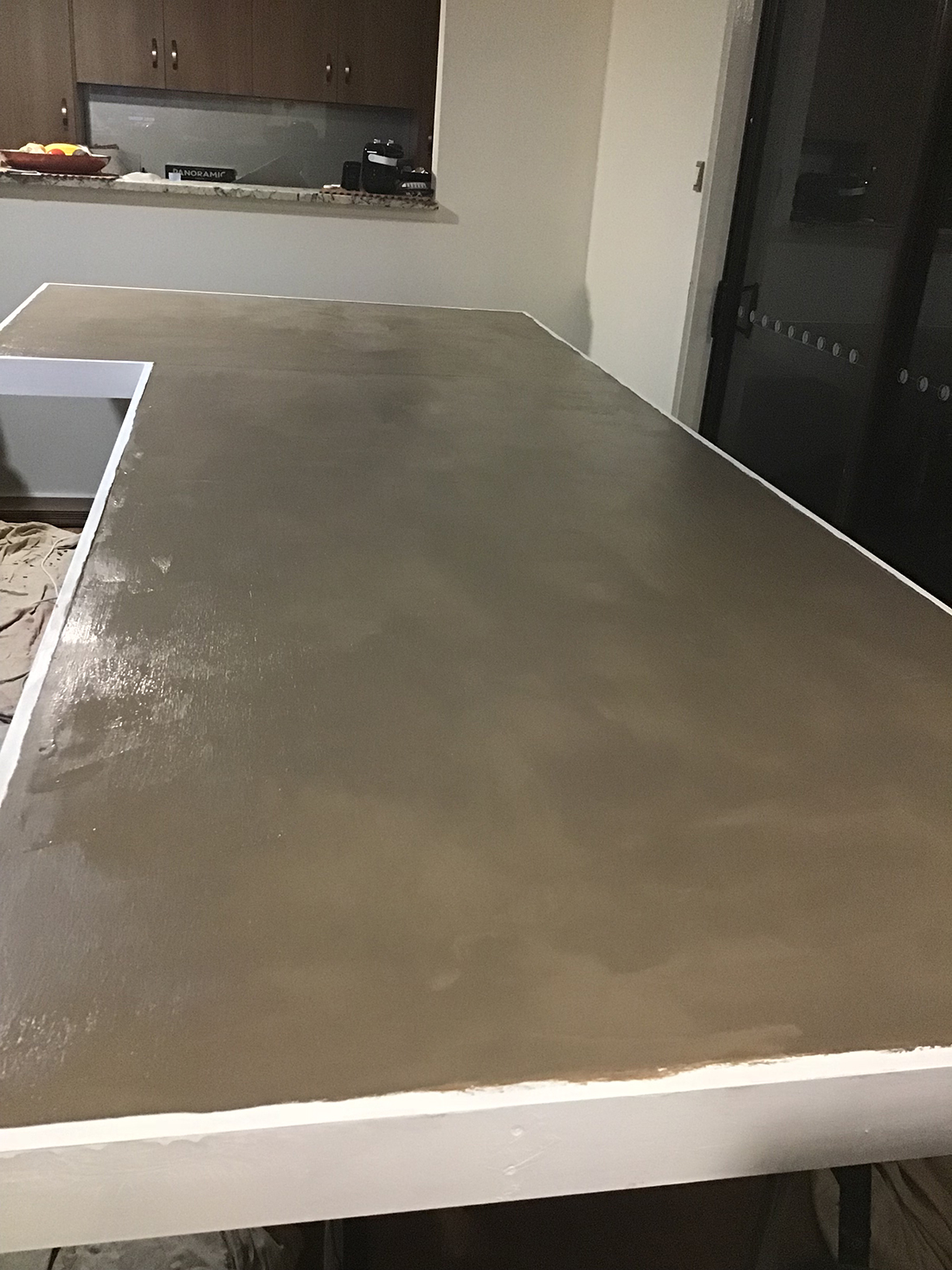 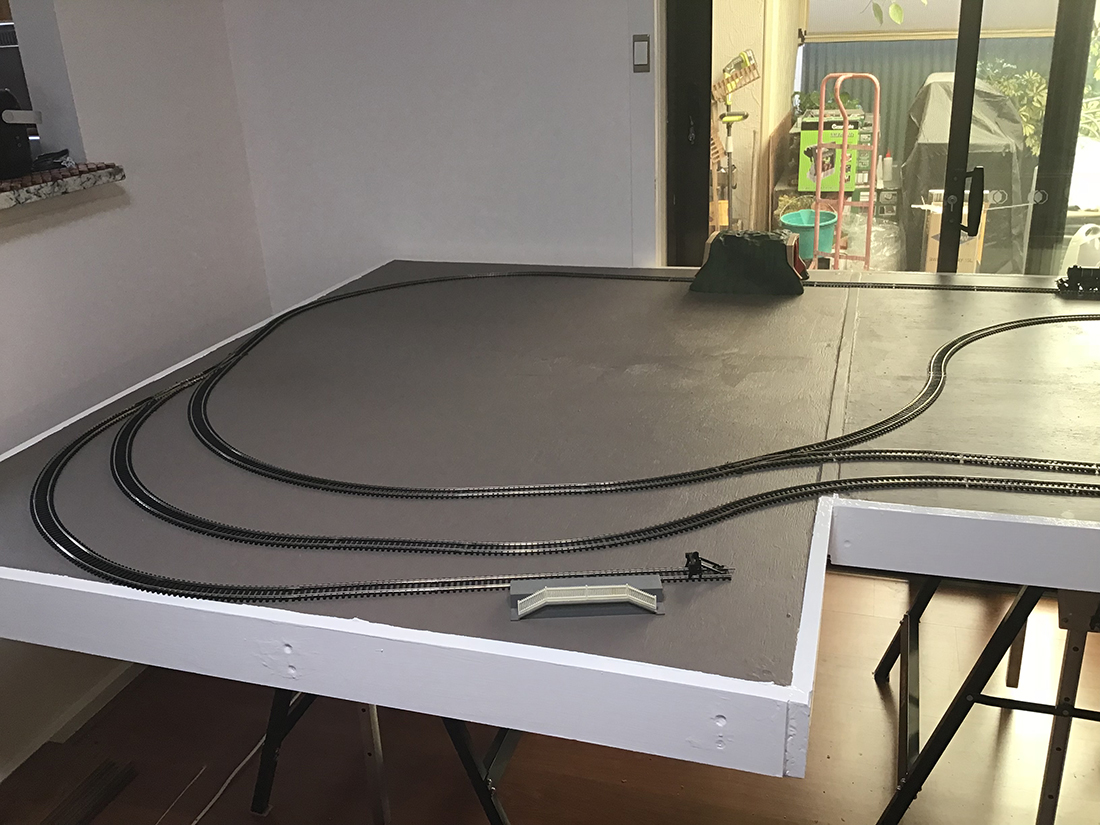 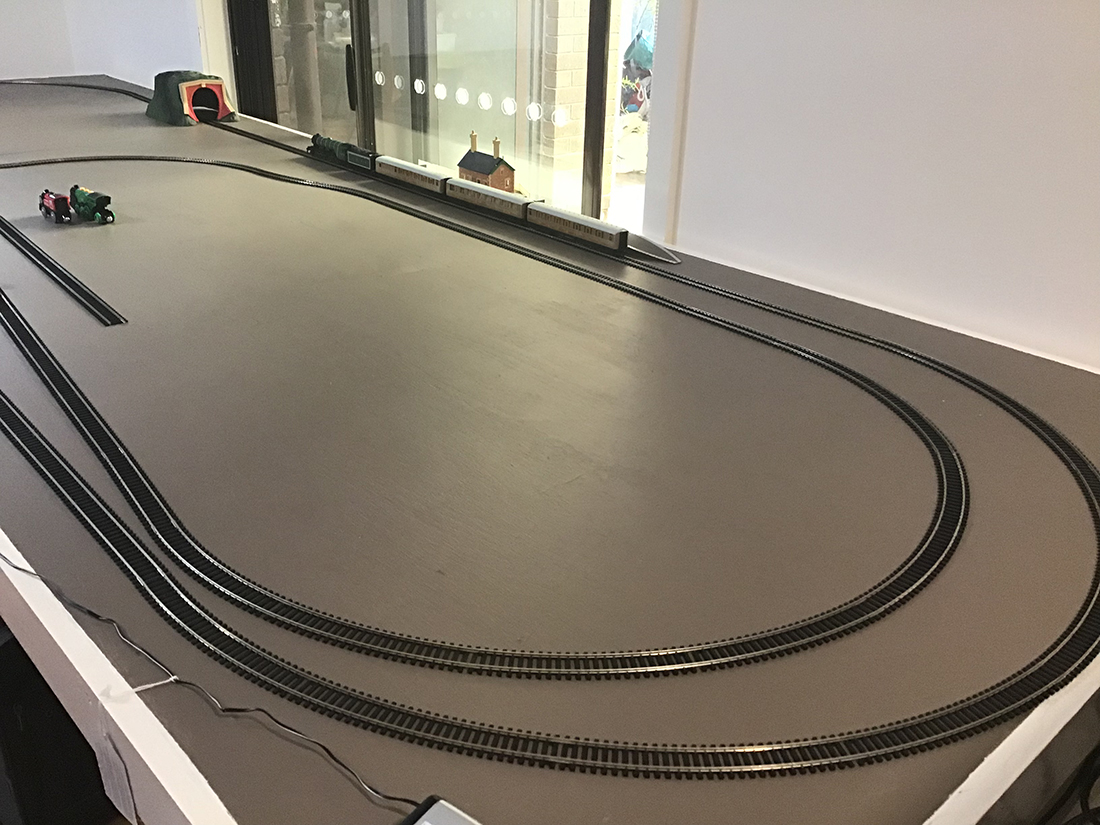 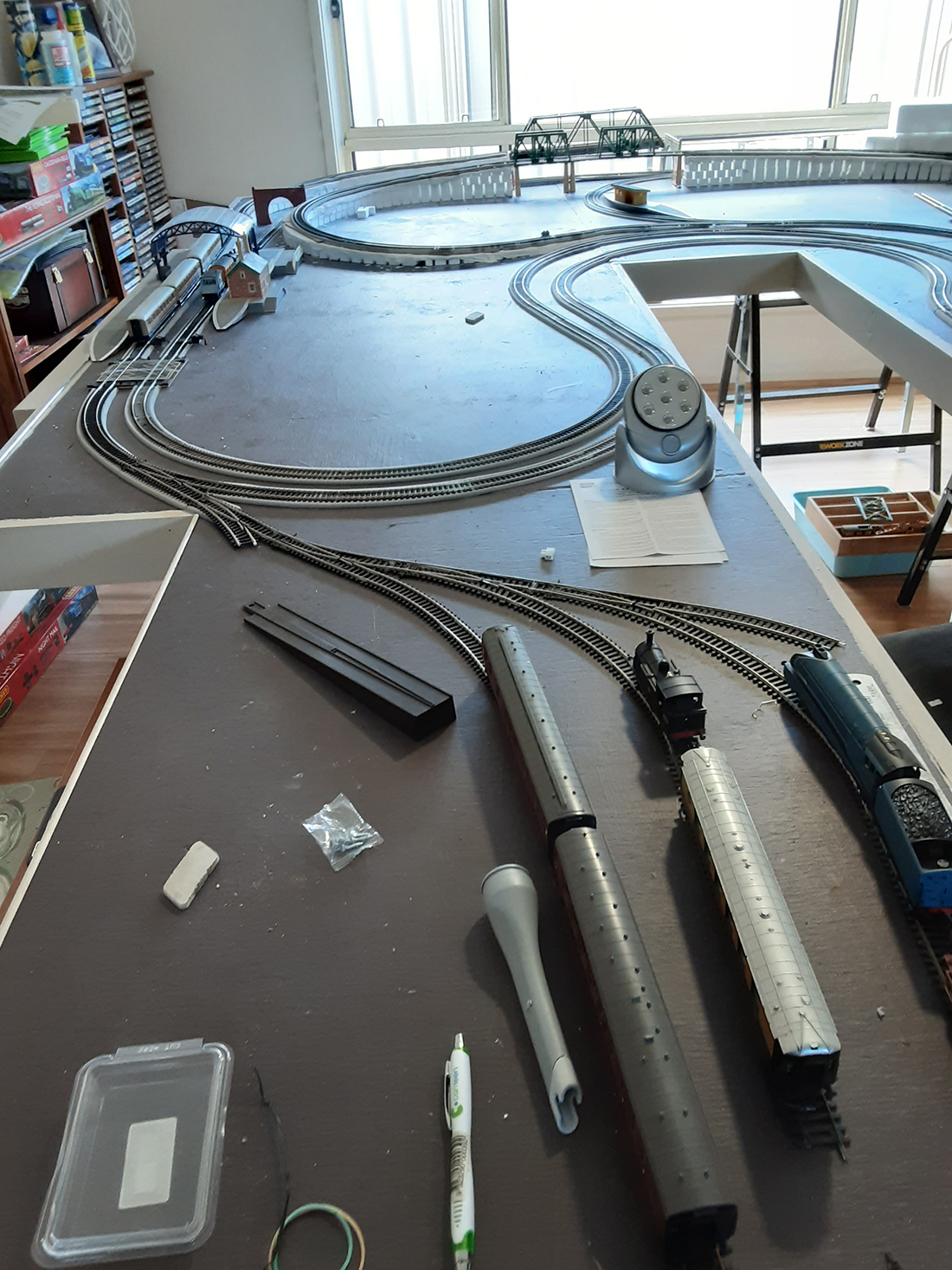 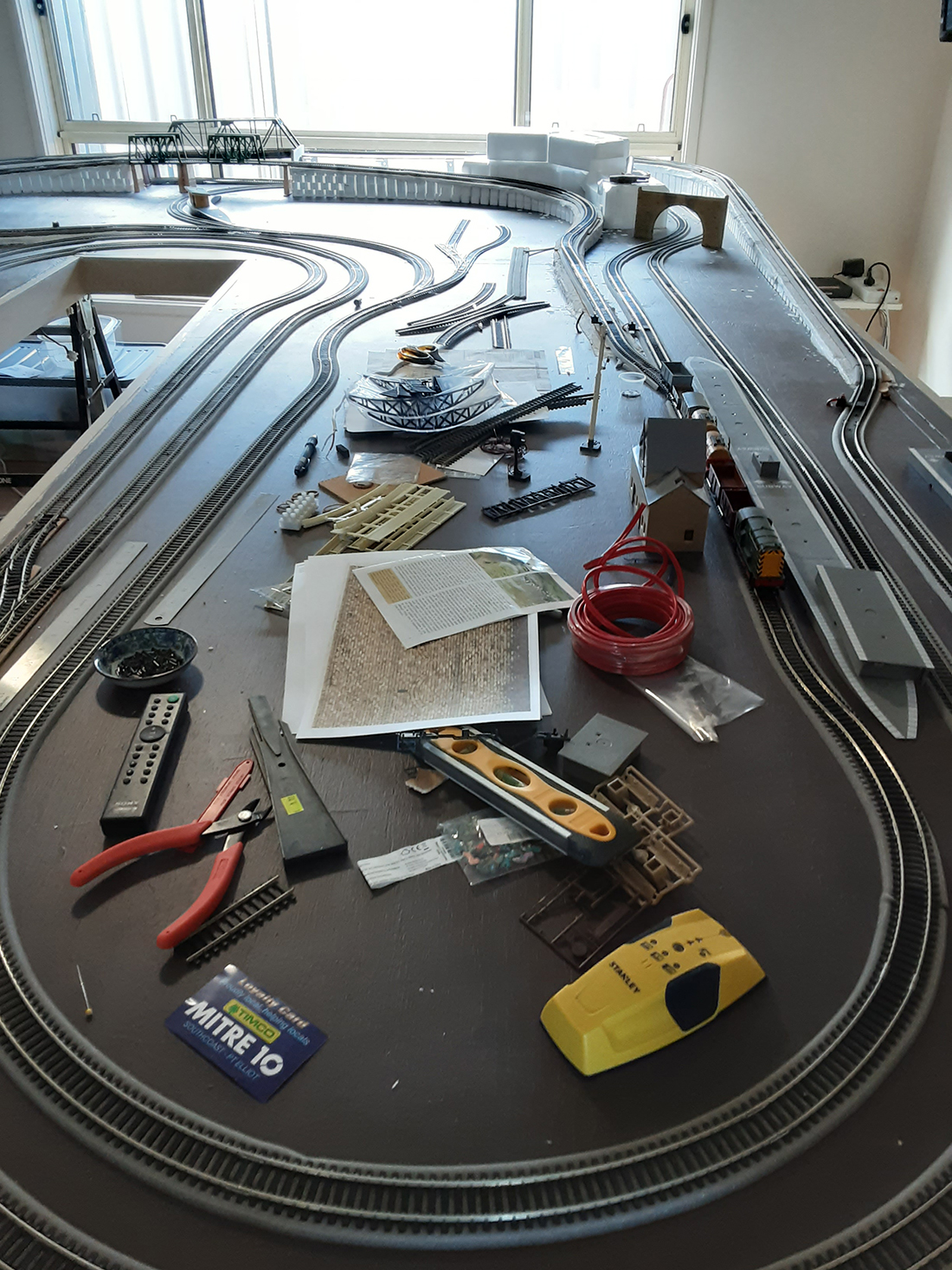 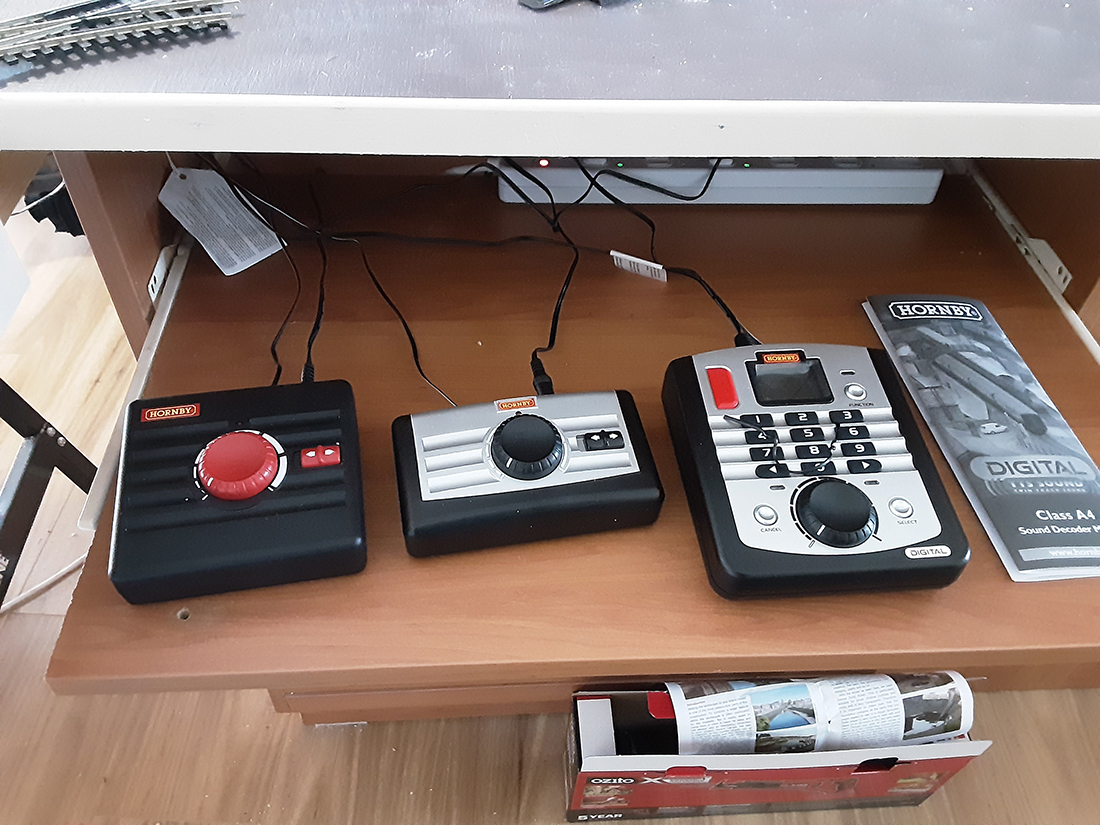 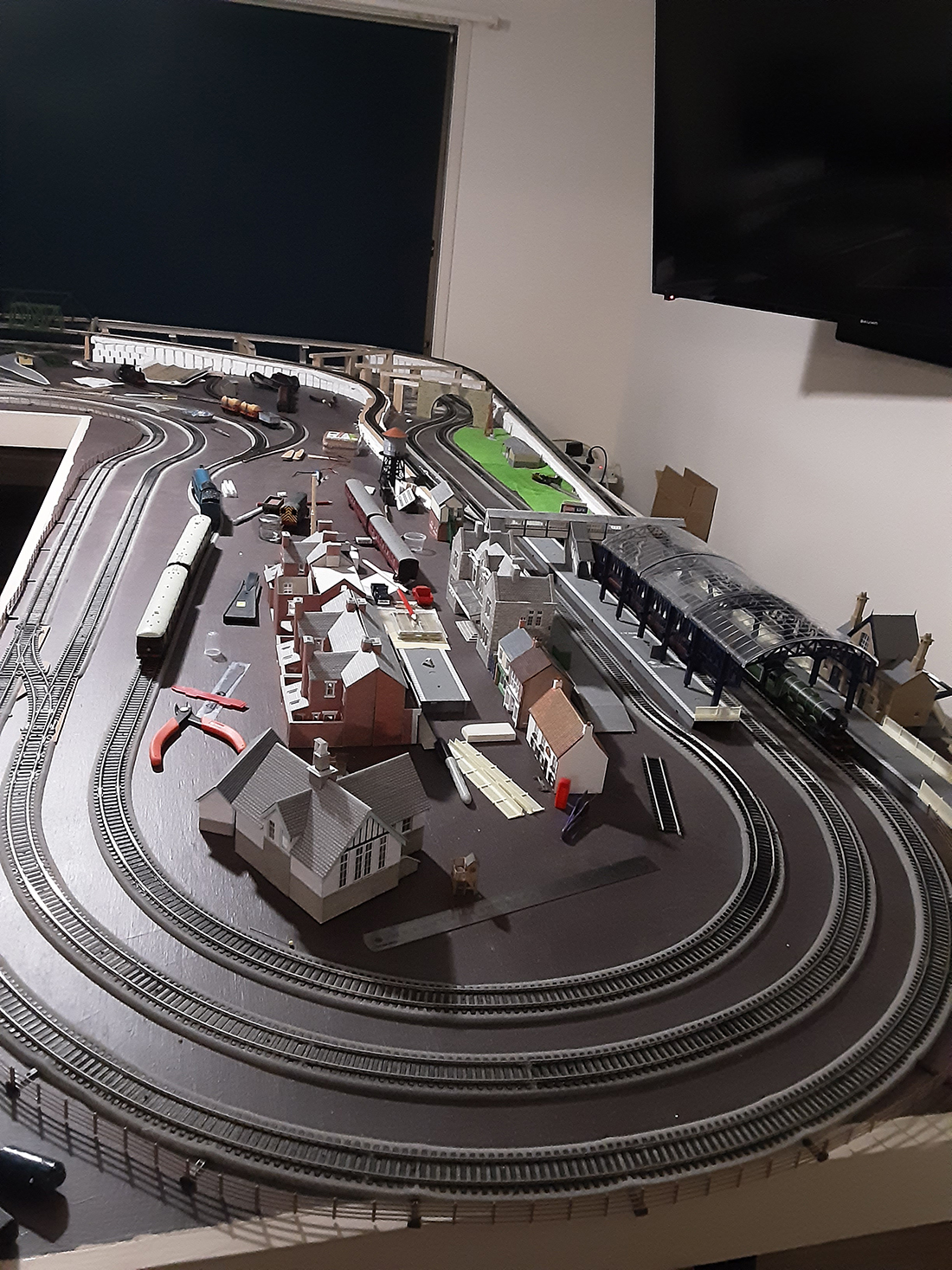 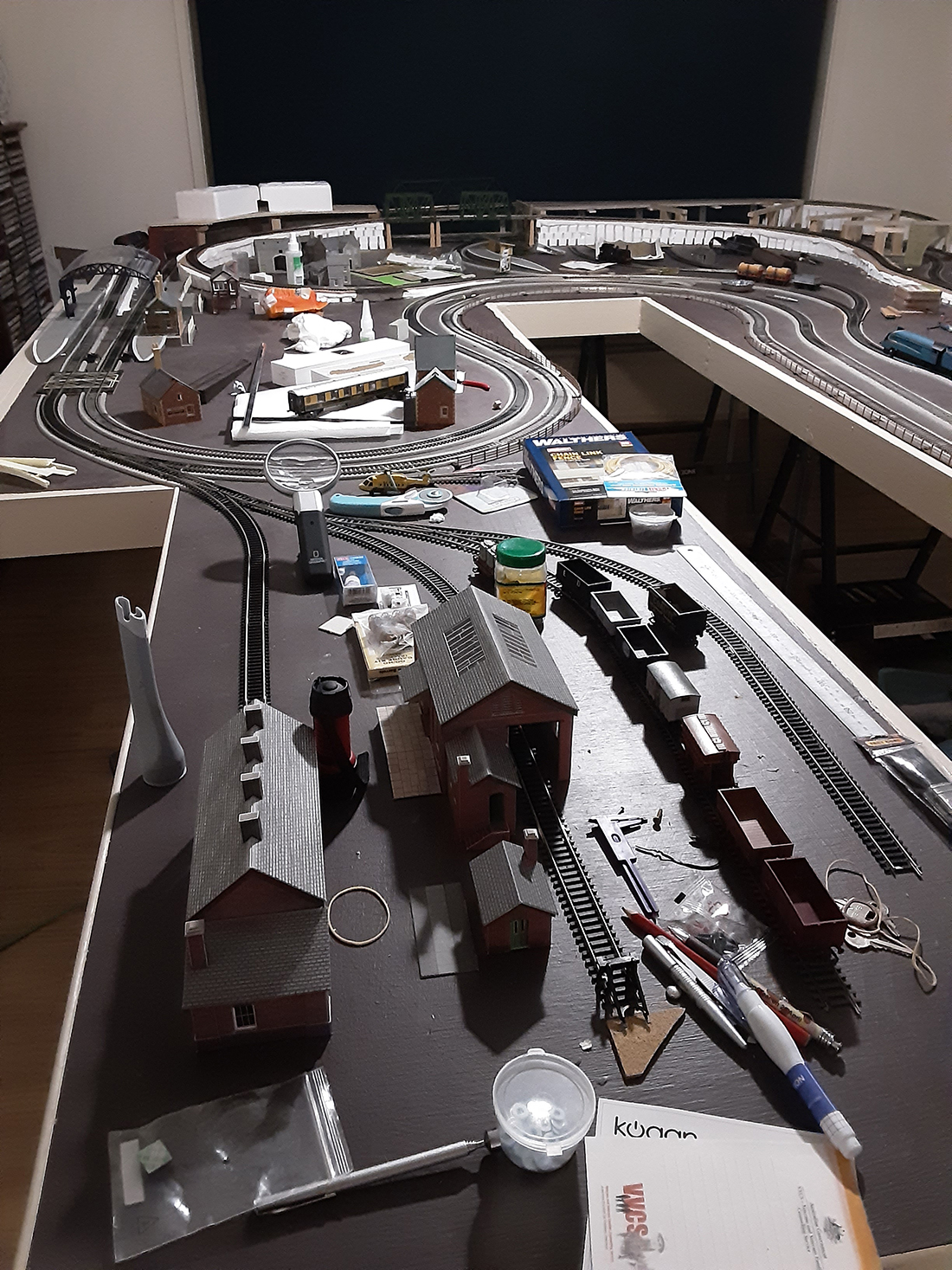 A big thanks to Fred.

I like posting layouts that are just starting to take shape, because it shows in spades this hobby is all about making a start.

“Al – I was inspired by a story you published about using servo motors to control turnouts. I did some research after reading this story and considered that using servos might be a viable option to replace the traditional solenoid motors in my current model railway.

I currently use the stud and probe method with nuts and bolts through my baseboard in the design of the track (photo below).

Solenoids were relatively expensive and due to the age of them, there were occasions when they would get stuck.

However, the method of controlling these servos seemed cost prohibitive given the cost of the controllers used to activate them. It seemed to me that the maximum numbers of servos that could be controlled by one control panel was 12 and they were expensive to purchase.

After doing further research (and with the aid of my extremely talented son) I believe that I have come up with a very cost effective solution.

Firstly I purchased an Arduino mega for about AU$14.00. It has 54 inputs meaning that it can control 54 separate servos.

I have hooked the Arduino up to three PCA 9685 16 channel PWM servo drivers. These cost about AU$8.00 each. As the name suggests each board can control 16 servos. They can be hooked up in series so that the full 54 inputs of the Arduino can be used.

The servos cost about AU$2.00 each and with the costs of a power supply, dupont jumper cable connectors (so I could make my own wiring) and aluminium channel to house the servo, each turnout worked out to around about $5.00.

I used a straightened paper clip to connect the servo to the tie bar of the turnout to act as the lever to change the direction of the turnout. There are many internet articles about fitting servo motors.

My son has written some sketches (programs) to control the servo for various purposes.

The first sets the servo at 90 degrees.

The second is to control a single servo – it is very useful to determine the angles required to change the point from straight ahead to turn.

The third sketch is to control up to 48 separate turnouts using the PCA 9685.

The input for each servo is the ‘stud’ part of the existing control set up with the probe being connected to the ‘ground’ input on the Arduino. Each time there is a connection between the stud and probe the servo moves in the opposite direction that it last moved.

Previously I had 2 studs per turnout – one for each direction. I now have one per turn out – each ‘press’ changes the turn out to the opposite side. The same results could be achieved by using press buttons although the wiring would be a little harder given that every button would need to have a common ground wire (this is achieved in my system with the probe)

The sketches (particularly the last one) allow for individual angles to be provided to each individual servo and the speed of the servo to be adjusted so that they change as fast or as slow as the modeller desires. They are down loaded to the Arduino and once downloaded the Arduino executes the program each time a button is pushed.

I then put a ‘z bend’ into the bottom of the straightened paperclip, attached the servo motor and pushed it up into the aluminium channel. After checking that the servo worked the top of the paperclip was trimmed back to the tie bar level.

This might impact on some business of the companies that have made turnout controllers but this system is far cheaper and thanks to the sketches already written it is very easy to install and control servo motors.

Hope this can be of assistance to the wider modelling community.


Now on to Cassio. I don’t really publish pics on their own, but this one had me looking at it for a while, so I thought, why not? 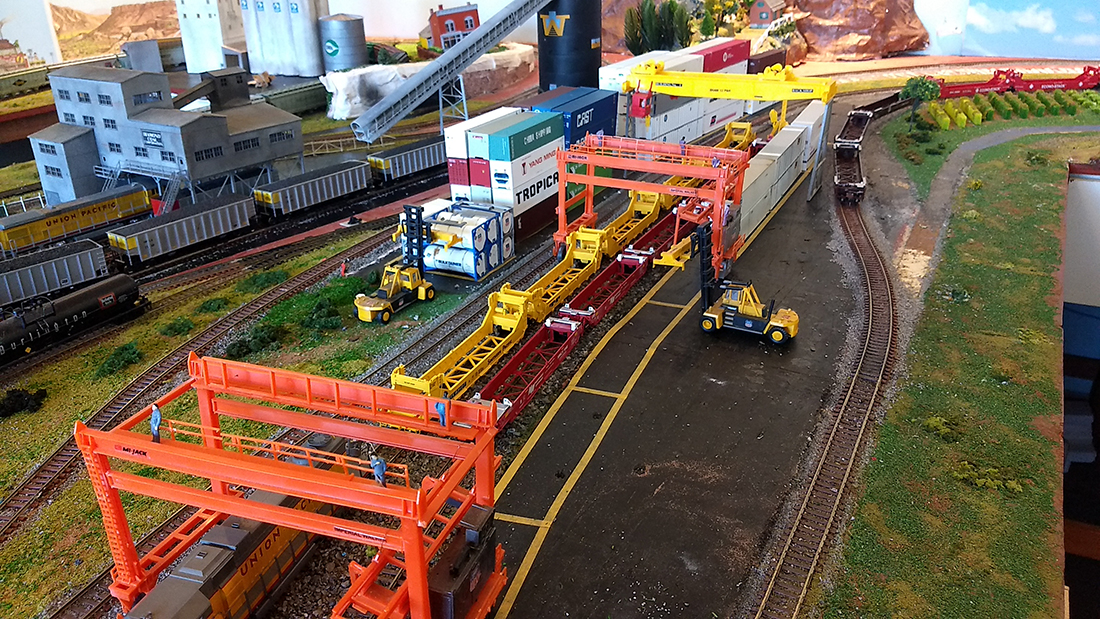 “Hi Al , just had a day out up in North Yorkshire to see some Steam.

This is the 2nd day back of the Railway, after being closed due to C19, thought some of the members might enjoy, as I say some saying they see too much of DMR with trains running.

I often ask whether I’m posting too much of Dave’s stuff. I have to say the people who say ‘yes’ are in the minority by a country mile, so I’ll continue to with Dave’s Model Railway.

A big thanks to Tim – I’m seem to be getting more and more Arduino submissions, like Keith’s and John’s.

And don’t forget, if you want to take your first steps towards your own layout, the Beginner’s Guide is here.

We start today with Heinrich. You can see his last post here.

Al, I would like to share the latest developments to my Karoo themed layout. A lot of credit must go to Johan, the builder of my layout. 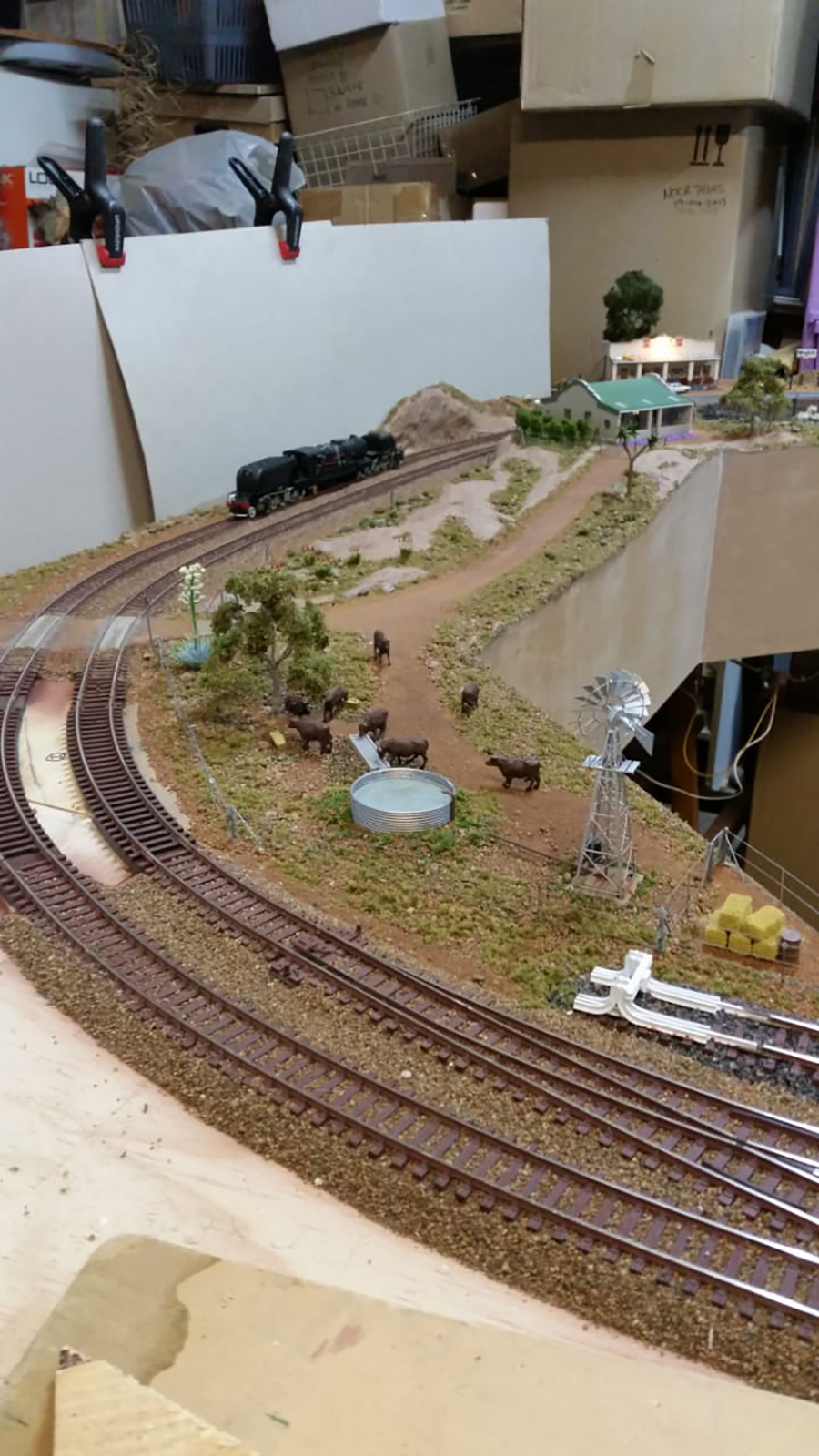 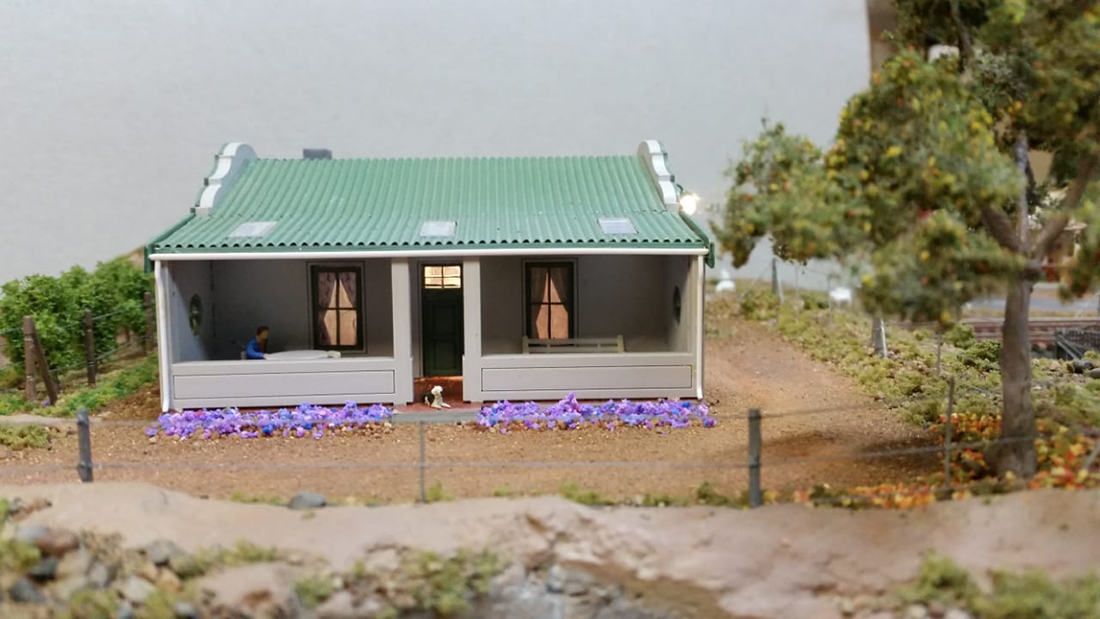 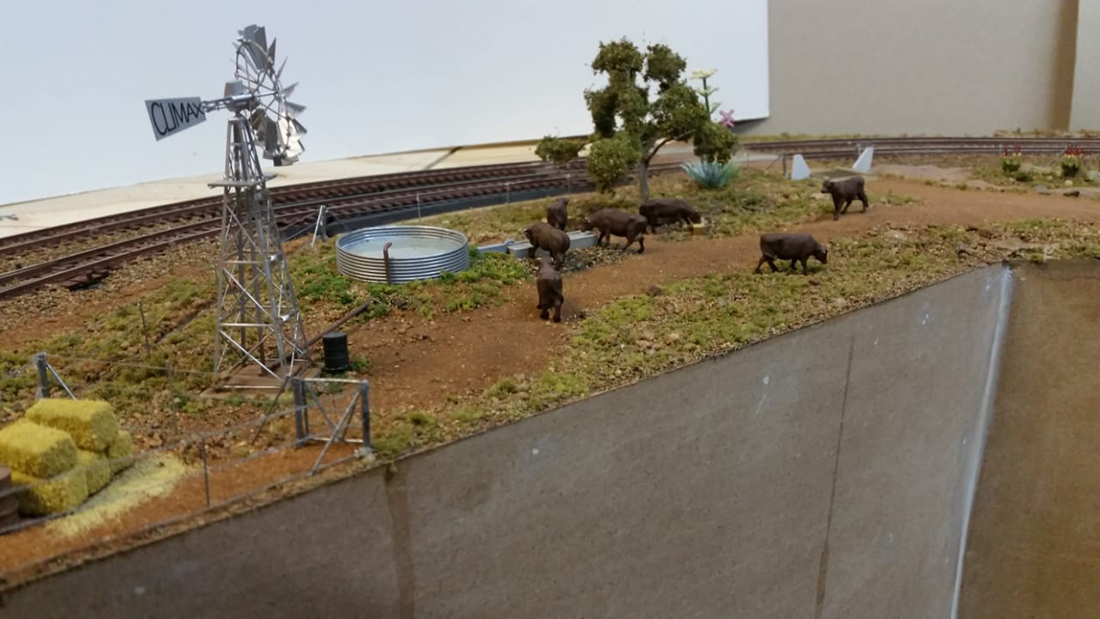 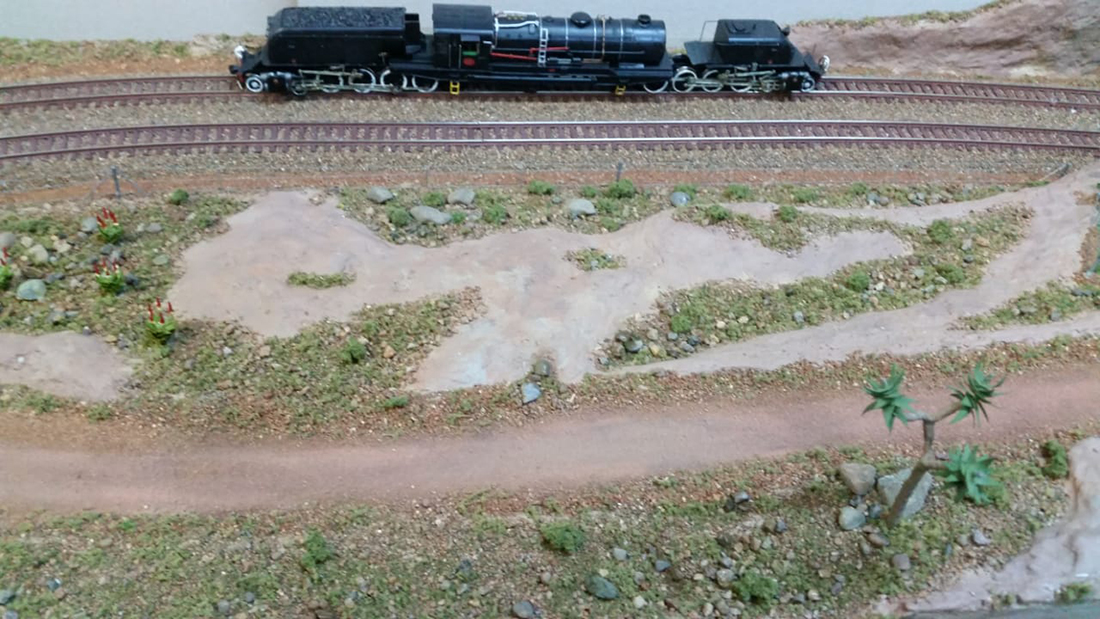 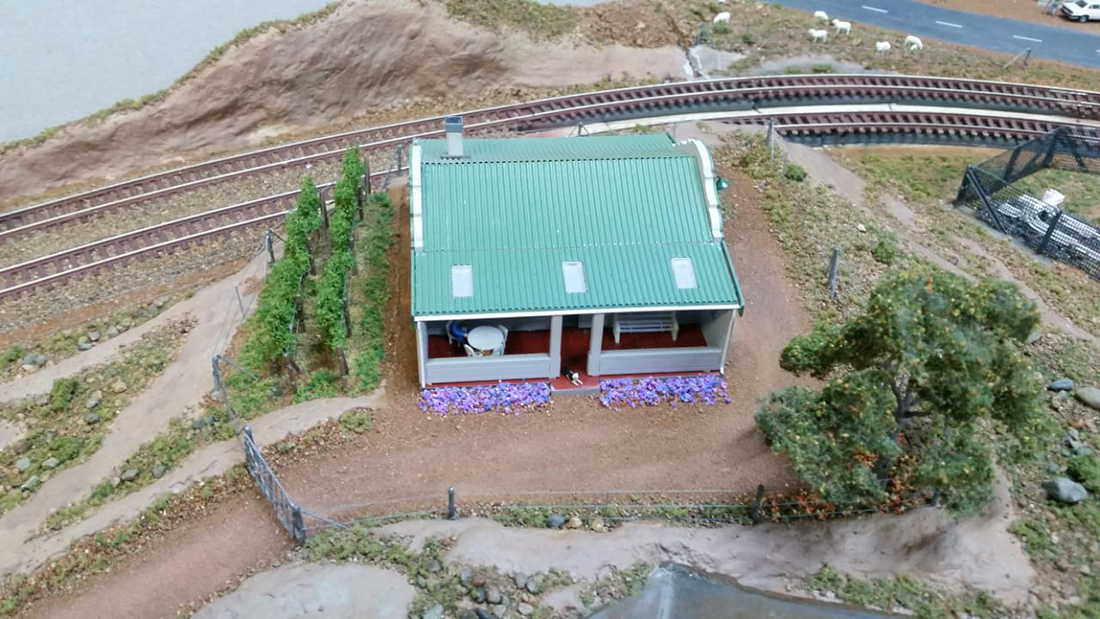 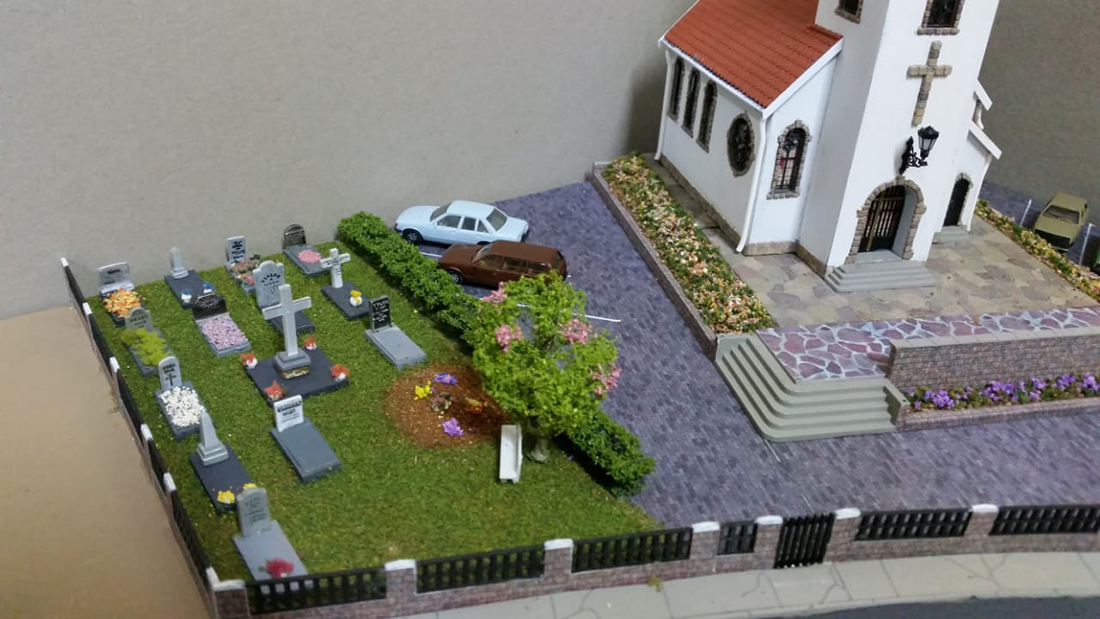 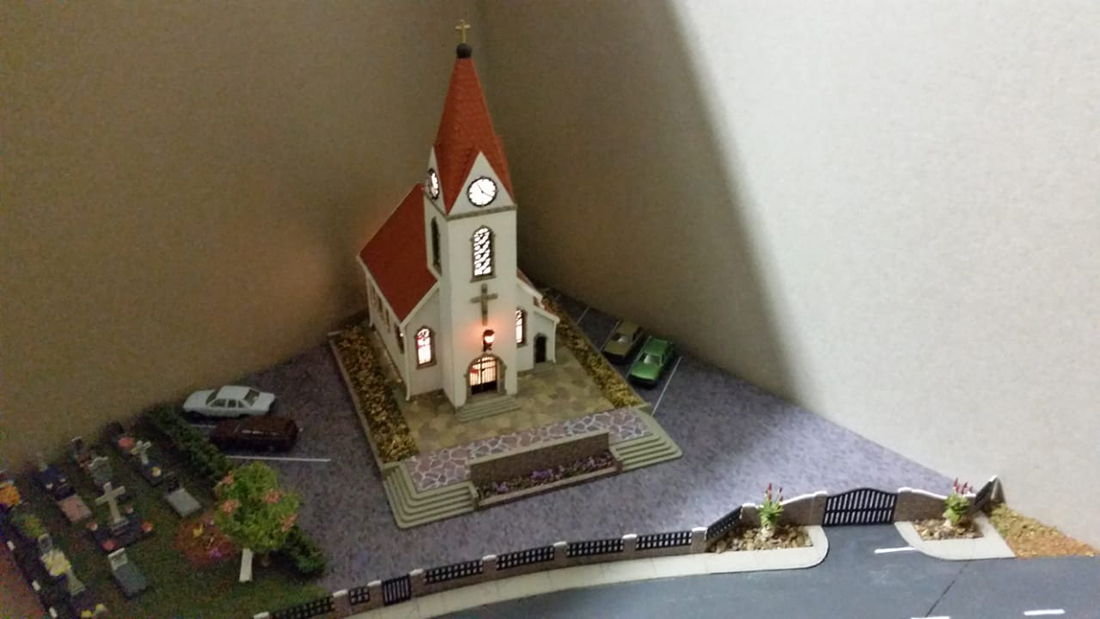 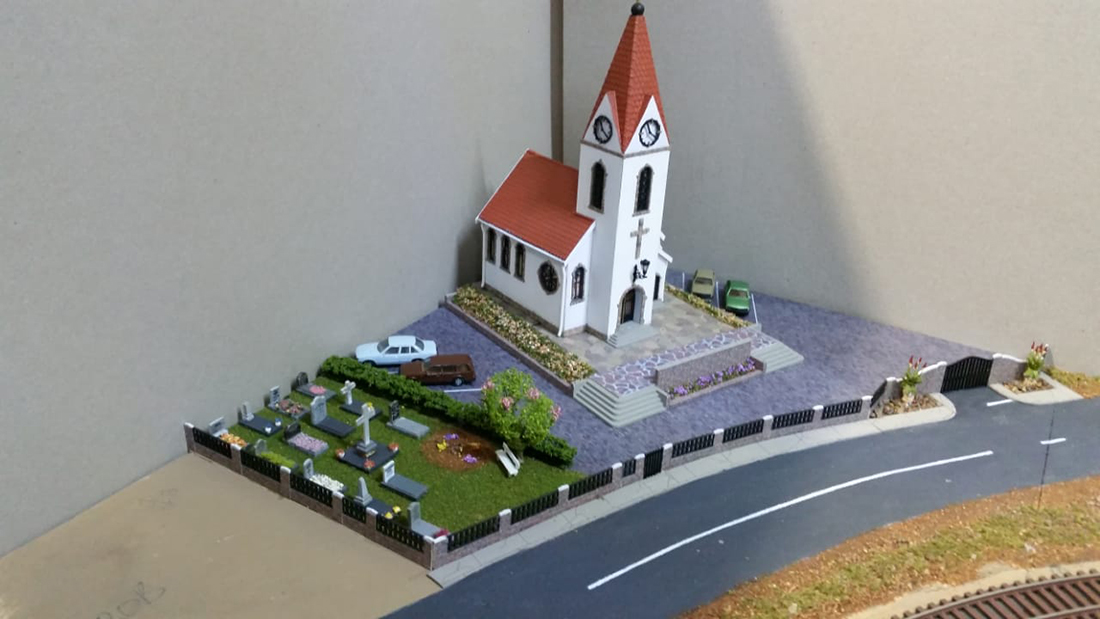 “I have a brief video of my layout (at least a portion of it) that I would like to share on your site.

I live in Arizona and took 5 years building it after details both common and unique to Arizona and just made the video to share my most recent addition of computerized n scale neon signs.

I’m a retired aerospace engineer (still working with electronic companies in my retirement) so the electronics plus the extreme detail have always appealed to me.

A big thanks to Heinrich and Paul.

And if today is the day you take that first step towards your own layout, the the Beginner’s Guide is here.