Well, I guess it is story time then.

Thank you for the invitation to the Hall of Fame. It is quite the honor.

I was born at a very young age.

Before he married my mom, my dad had been a maritime radio operator. The man who taught my father radio had an interesting history himself, that man was the radio operator on a vessel known as the California on a certain April night in the North Atlantic in 1912. My mother had been a research chemist for Shell Oil working on the development of synthetic rubber before she went into teaching.

It was my father’s brother who got me into trains. He collected Lionel but he gave me a Kusan O Gauge train set.

My father was also into model trains with a substantial amount of Marklin which he would set up in the living room at Christmas. My mother had built an American Flyer S gauge layout for her two sons (She was a 35 year old widow when she married my dad).

Also, my maternal grandfather had been an engineer (train driver) for the Santa Fe railroad in the very early 1900’s. He went into farming in the 1920’s and there is a long story there. 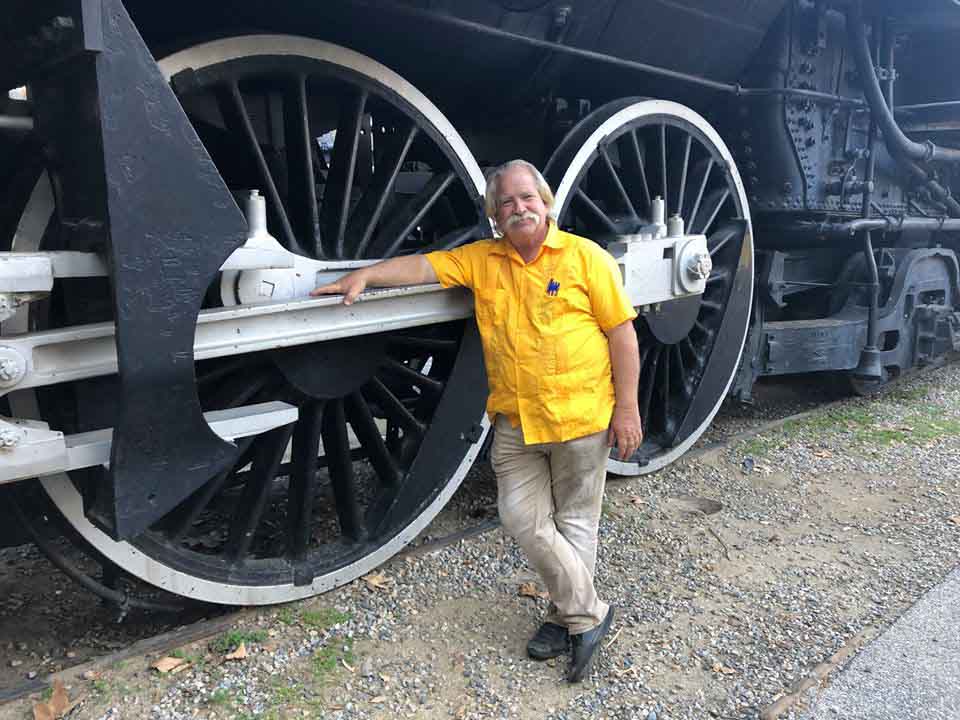 I really got into H0 Scale model railroading after I discovered my father had an H0 layout under his Marklin layout. That may have been 1971. At that point we had a 1.5 inch scale electric locomotive that we had purchased in 1970 and that was my introduction to that scale.

In 1972 we purchased a 1 inch scale live steamer. I still have both locomotives and both are undergoing restoration.

From the early 1970’s to today I have never been longer than three months without some kind of layout. Before I got married in 1985, I told my girlfriend/fiancée that the trains were there before she was and if that was going to be a problem, the time to get out was now.

After we got married, when she discovered how much I liked the trains and building things, she made sure there was always a place where I could have them. She bought me something train related every birthday, every Christmas, and many father’s days as well. Sadly I lost her January 20, 2020.

Part of what made it possible for me to always have a layout was that I started building very small layouts when my wife and I moved into our first apartment.

My first layout there fit on my desk, so did my second, third, and fourth. (Two different apartments).

In time, building small layouts (some call them micro layouts) became my passion in this wonderful hobby we call model railroading.

Thanks to one small layout that I built and Al Lee, I discovered the wonders of paper and card kits. These too became a passion after a while.

While I spent way too many years as a “professional student” (over 500 units of college credit – and two degrees), I spent most of my employed years in pest control and as a food server.

I often worked 80 to 100 hours per week to keep a roof over the family head and food on the family table. I found I liked customer service a lot more than what I call the “cubicle jungle”.

I mention this because one of the biggest complaints I hear is that people say they do not have time for a hobby. It is my firm belief (handed down from my father) that your mind needs exercise as much as your body does. I also believe we need emotional exercise as well. To quote a truly wise philosopher: “We do not stop playing because we grow old, we grow old because we stop playing.”

After losing my wife, I relocated from Southern California to Northern Nevada. I am now living several dreams — but without the one person who really made things “complete”. Shortly after I got my 1.5 inch scale locomotive I wanted to build a railroad in the back yard. That was about 1972. While I did get about 20 feet of track down, that was about as far as that railroad got.

Today I have over 900 feet of 7.5 inch gauge track on the ground. On the morning following the coldest night of our honeymoon, Christy and I discovered beautiful Topaz Lake. (We had almost run out of gas and had to sleep in our car, I think the temperature dropped to about 23 degrees that night based on the icicles hanging from the inside of the roof of the car in the morning.)

The trees were so beautiful and the lake was so beautiful that I knew that was the area I wanted to retire to. Life happens and the dreams deepest in our hearts often do come true.

And here’s some of John’s posts:

John’s challenge (scroll down to the bottom).