John’s been in touch again – this time with his EZ track layout:

John from Topaz Ranch, Nevada here. Used to be John from California.

How to begin this…

“I solemnly swear I am up to not good.”.

Here is the Marauder’s Map of what is going on right now.

In 1995 I built a small layout for my son and I to play with. The layout fit between the fireplace and a sliding door that was the primary entrance to our house at the time.

Bachmann’s EZ Track was new at the time and it looked like it might be more resilient to the not so subtle ministrations of a four year old boy than Peco track had proved to be.

The layout was as simple as it was small.

It survived a little over 10 years and the track even survived my young daughter climbing on it several times. Sadly it was that last activity that destroyed everything but the track.

Around 2018 I began to really miss “Williams” (the name I gave that layout). I also was considering writing a book on EZ Track and small layouts at the time.

After I lost my wife in January of 2020, I really had space to resurrect Williams but… It was in early 2021 that I purchased a board to build it on.

Alas I could not find where I had stored my stash of EZ Track. I tried using some Atlas track but it just did not feel or look right.

While moving, I found the EZ Track and on March 5, 2022 the reconstruction began.

On the original Williams I was mildly frustrated by the lack of a fiddle track or any possibility of expanding the layout.

In this rebuild I made some minor changes that resolved that issue. I like what I have chosen to do — A choice made to keep the original footprint of 3.5 feet by 5.5 feet.

Had I been willing to add a little to the length (say six inches) I might have made a different choice for the “escape” tracks.

I am calling my new layout Wellington after the nearest town with a name that sounds like a railroad might have served it.

Another change is that while the original Williams layout used all commercial structures, every structure in Wellington will be scratchbuilt by modifying paper kits — Some from the 1950’s!

Here is a photo or two of the track had I built it exactly as I built the original. 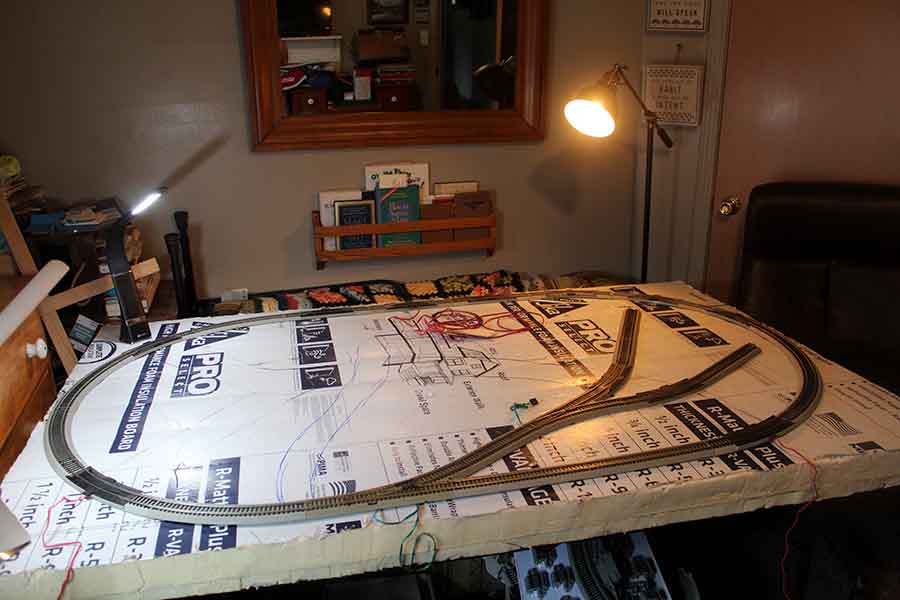 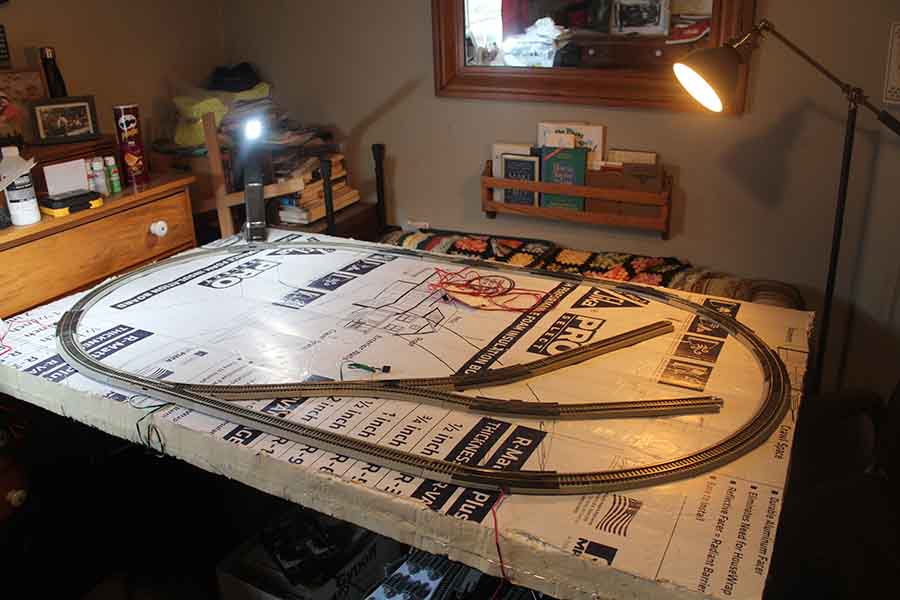 The original Williams layout was framed with foamcore paper board hot glued together.

That frame was solid enough but I made an even more solid choice this time, rigid insulation foam.

In both cases keeping the layout light was a significant goal. Wellington is light enough to rest on an inexpensive fold up table (2×4 feet).

Here are some photos of the revised track plan. 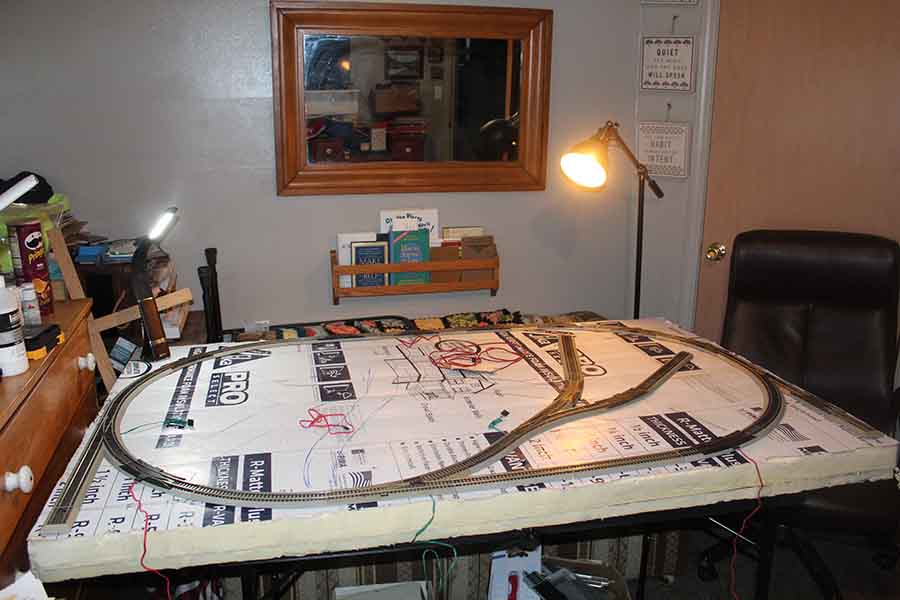 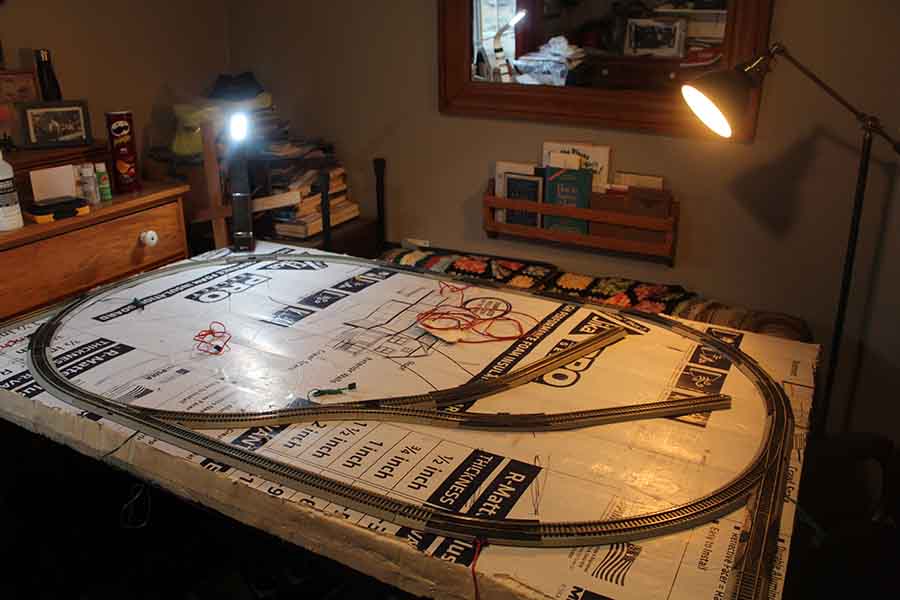 In building Wellington, all the track ins secured with full strength white glue.

The glue was applied to the edges of the EZ Track and the track was weighed down for 12 hours before the weights were removed.

The track is secure, very secure. In the past I have used hot glue to secure the EZ Track, this actually worked better.

One issue came up with the EZ Track and it deserves mention here.

One must always be careful when assembling track to make sure the joiners are properly on both rails.

This is true with everything but Kato Unitrack. It is good to check with a finger to make sure that there is no bump on either rail at the joint.

A challenge with EZ Track is that the plastic snaps like to engage before one has got the rail joiners properly aligned.

This snap action can make it easy to have a joint where the joiner went under the rail — very bad and a source of derailments always.

In my case, at one joint one joiner went properly on the outside of the rail where it looked correct, the problem was that on the inside of that same joint the joiner went under the rail and that miss was hard to see.

Worse was that running a finger over the joint did not reveal the misaligned joiner. Yes, a derailment occurred at this joint but not any other. Quick work with a single edge razor blade and a small, sharp, chisel solved the problem.

When building a small “roundy round” layout, if one can see the train for the full circuit then the illusion that the train goes somewhere is lost.

I solved this problem with a view block and tunnel on the original Williams.

I am using the same “trick” here on my Wellington layout. 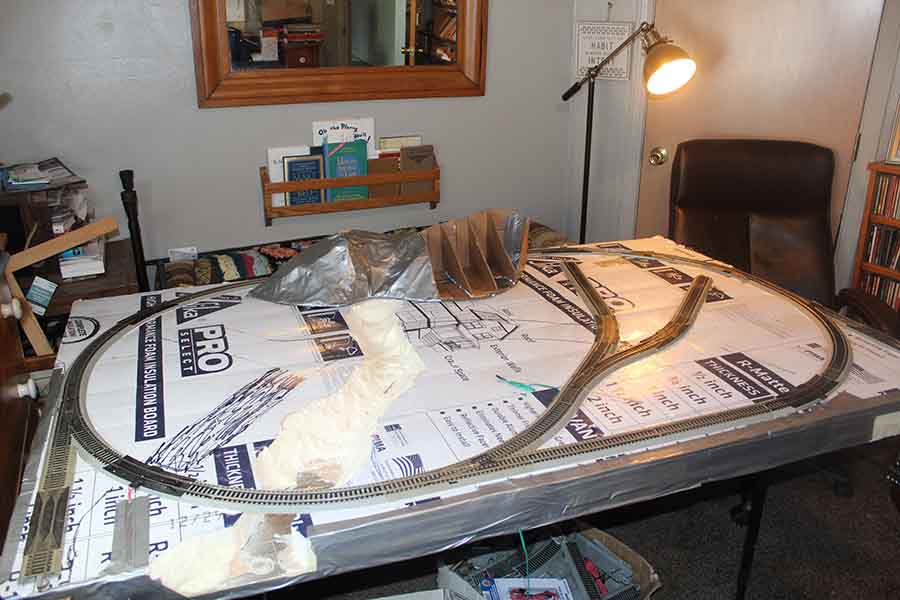 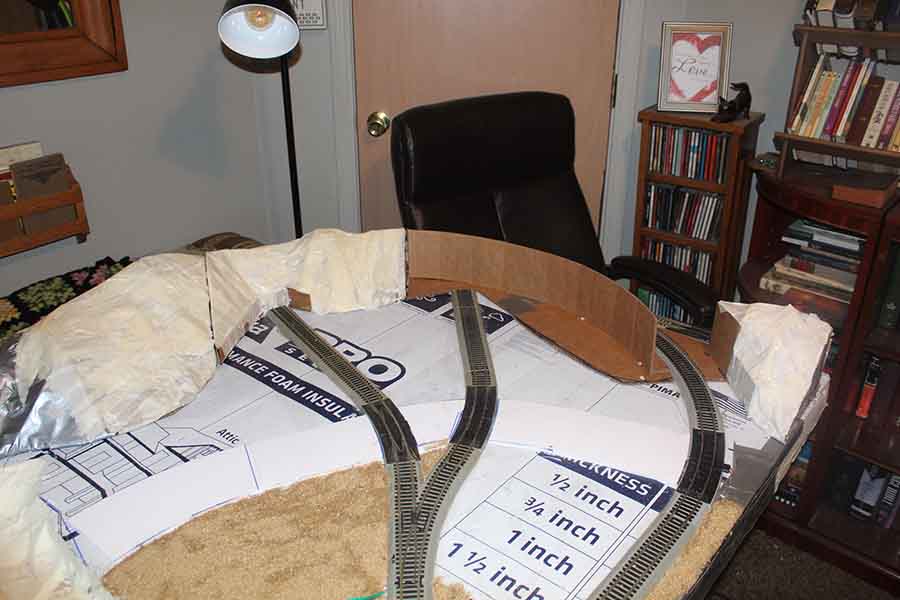 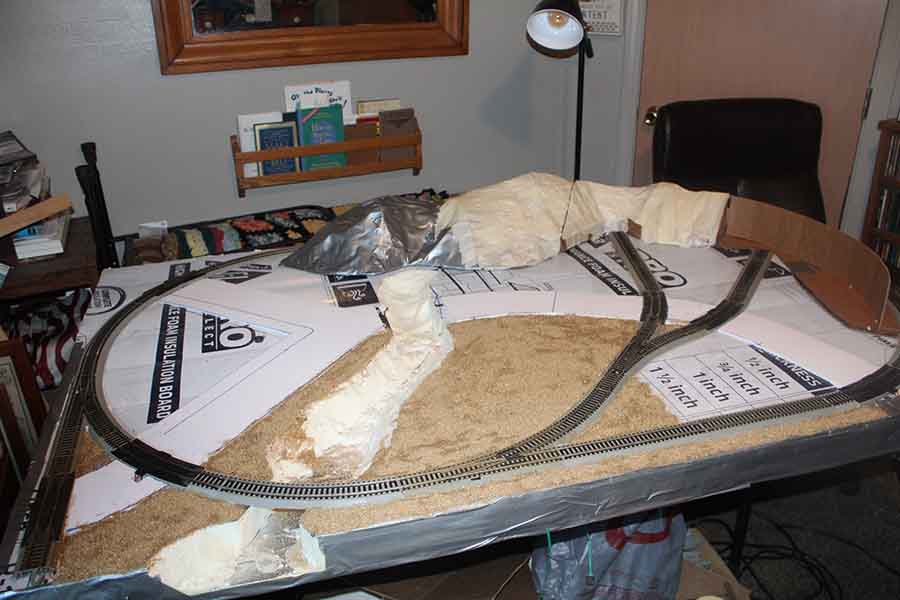 On scene that I liked on my original Williams layout was a little creek that separated the town from the “business district”.

For a bridge over the creek I used two girders from a commercial kit — I think it was supposed to be a flat car load.

For Wellington I have kept the creek but scratchbuilt a little bridge or trestle for the track to cross it.. My bridge was built from card and a little balsa, mostly from card though.

Here are some photos to see the construction. The bridge had an unplanned skew in the creek so that made things a bit more interesting for the build. 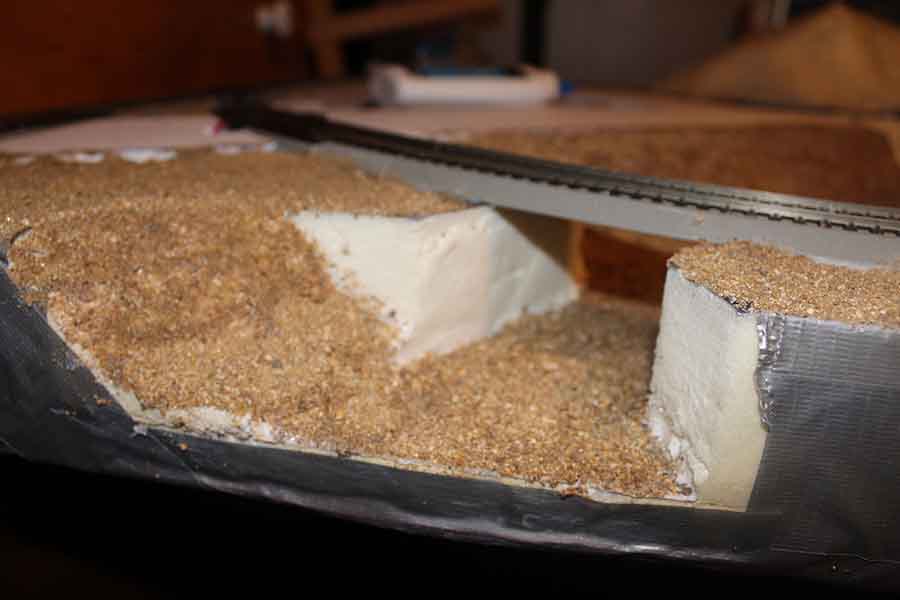 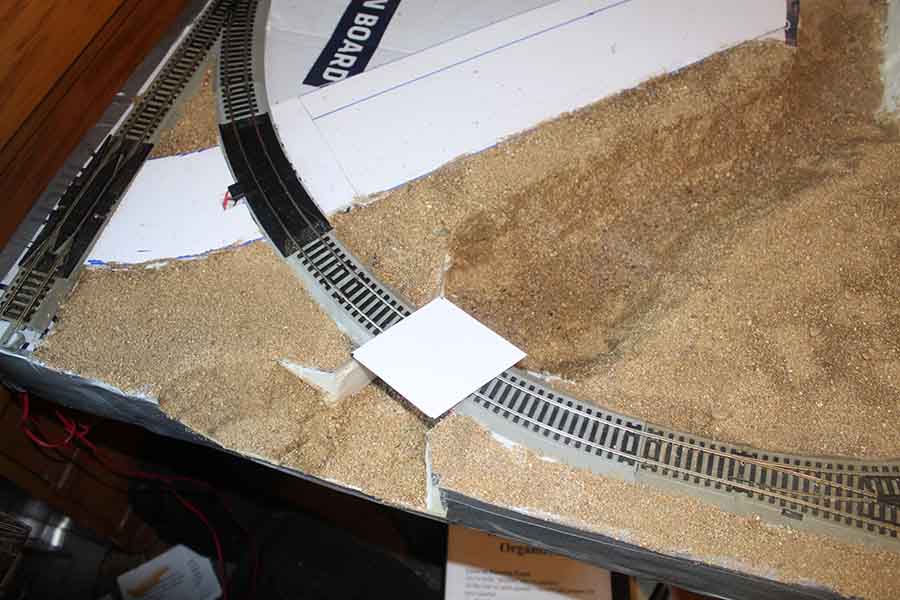 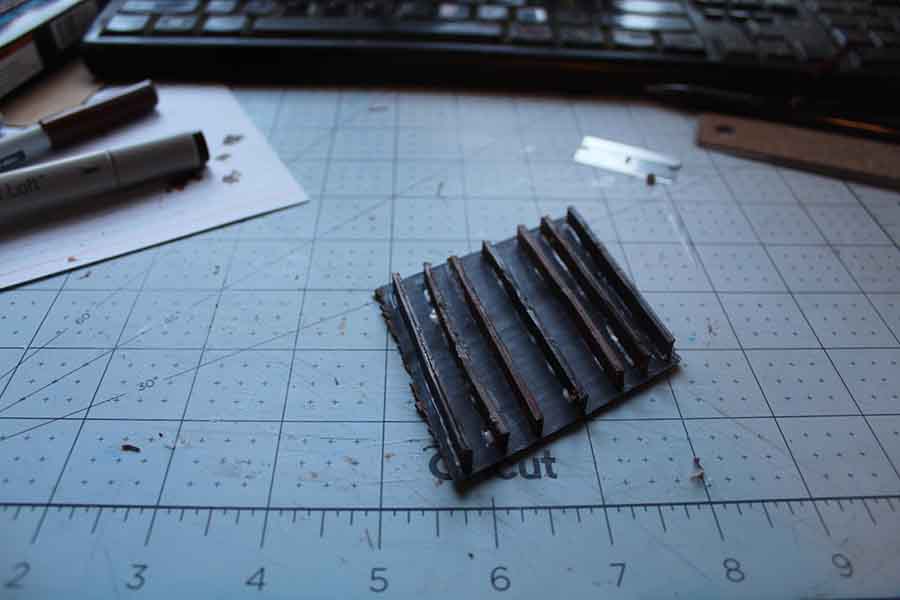 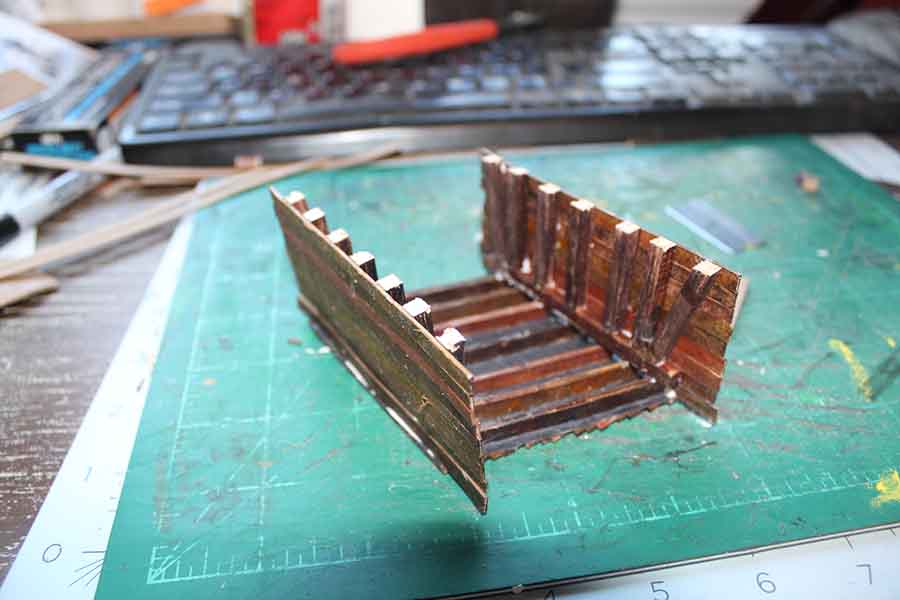 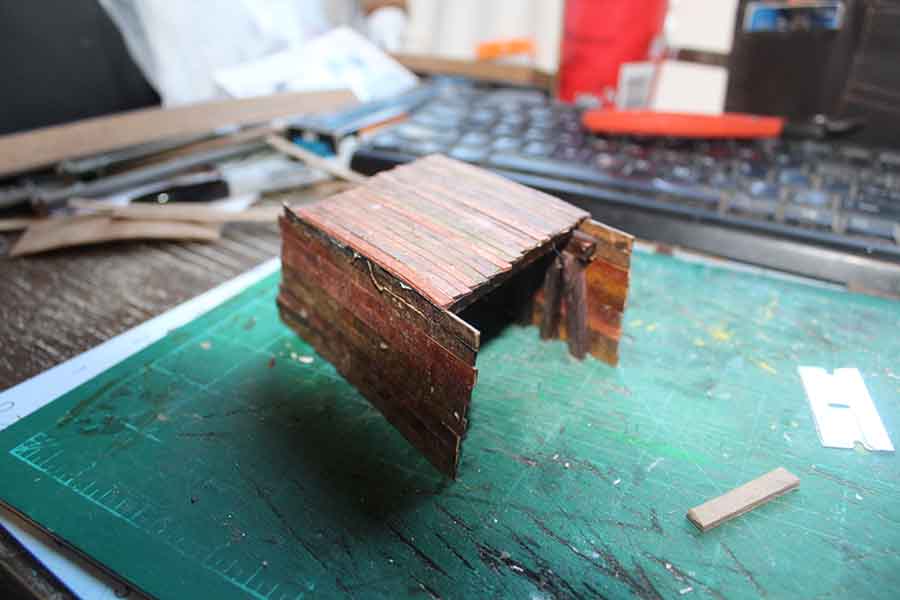 Here is my little bridge in place.

This is the visible side, there is still a little work to be done on the back side and that will happen soon enough. 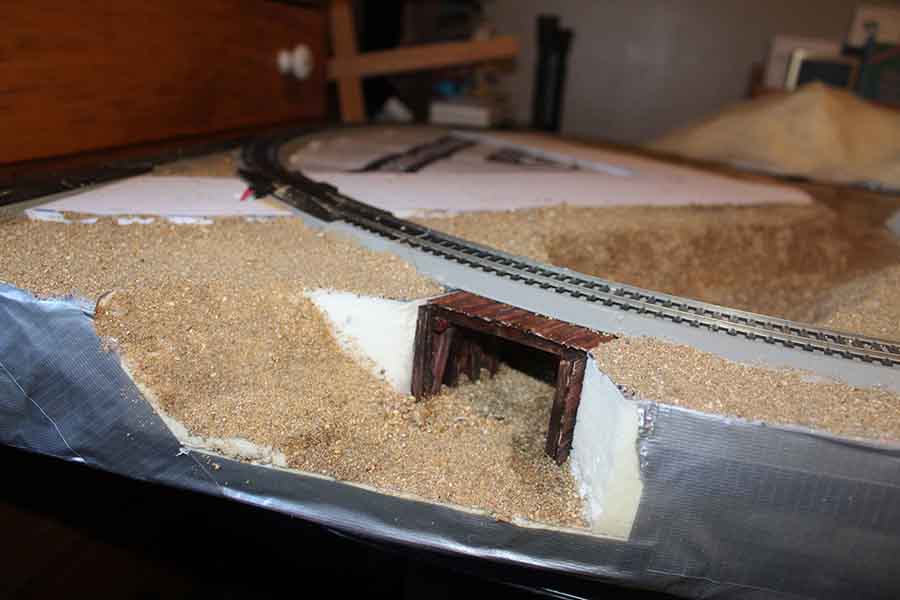 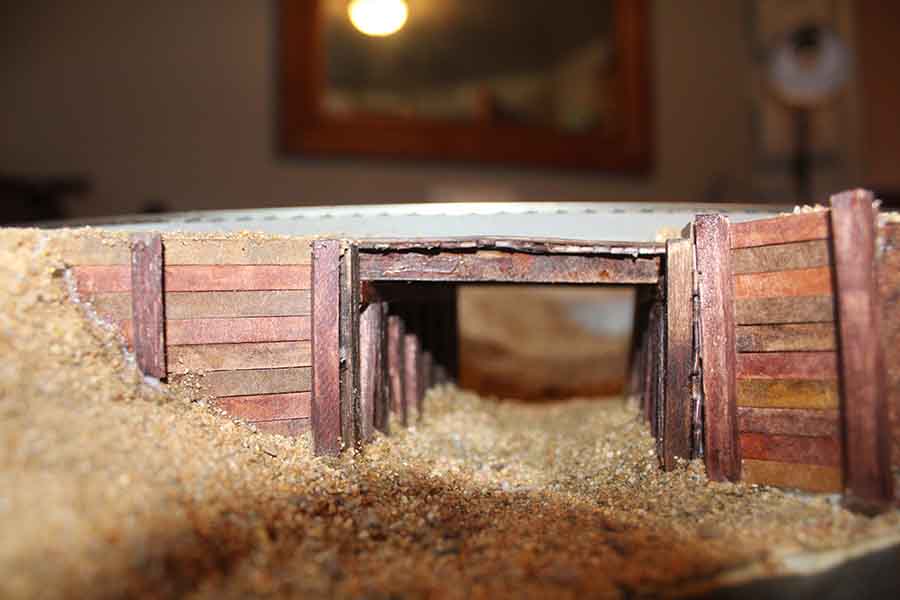 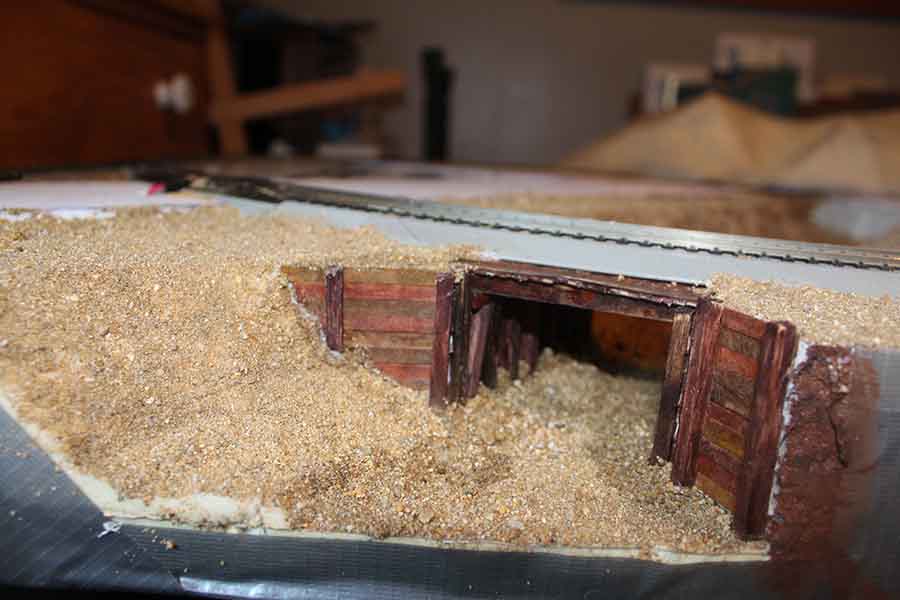 And the Marauders Map now looks like a blank parchment again.

A huge big thanks to John – I absolutely love his stuff.

And if today is the day you get started on your layout, even if it’s a “roundy roundy” as John calls them, the Beginner’s Guide is here.