John’s been back in touch with an update on his small gauge railroad: the Breccia Light Tramway.

And my word, what a project!

“Some dreams take a while.

When I was 13 years of age I dreamed of having a railroad in my back yard. I did get about 20 feet down but that was as far as it got.

Five decades have passed now, half a century, and that childhood dream is coming true.

About two years ago I made the commitment to move from Southern California to Northern Nevada. I found a property that I could afford at the edge of nowhere and made the purchase.

The area was one my wife and I dreamed of retiring to when we found it on our honeymoon. Alas I lost her in January of 2020: That and other life events in early 2020 encouraged me to leave the stress filled urban life behind and retire early.

The purchase was completed in August of 2020 and I purchased some temporary panel track for my outdoor railroad that November of 2020.

The panel track was an important planning aid and I still use it when I need to test an idea or two. 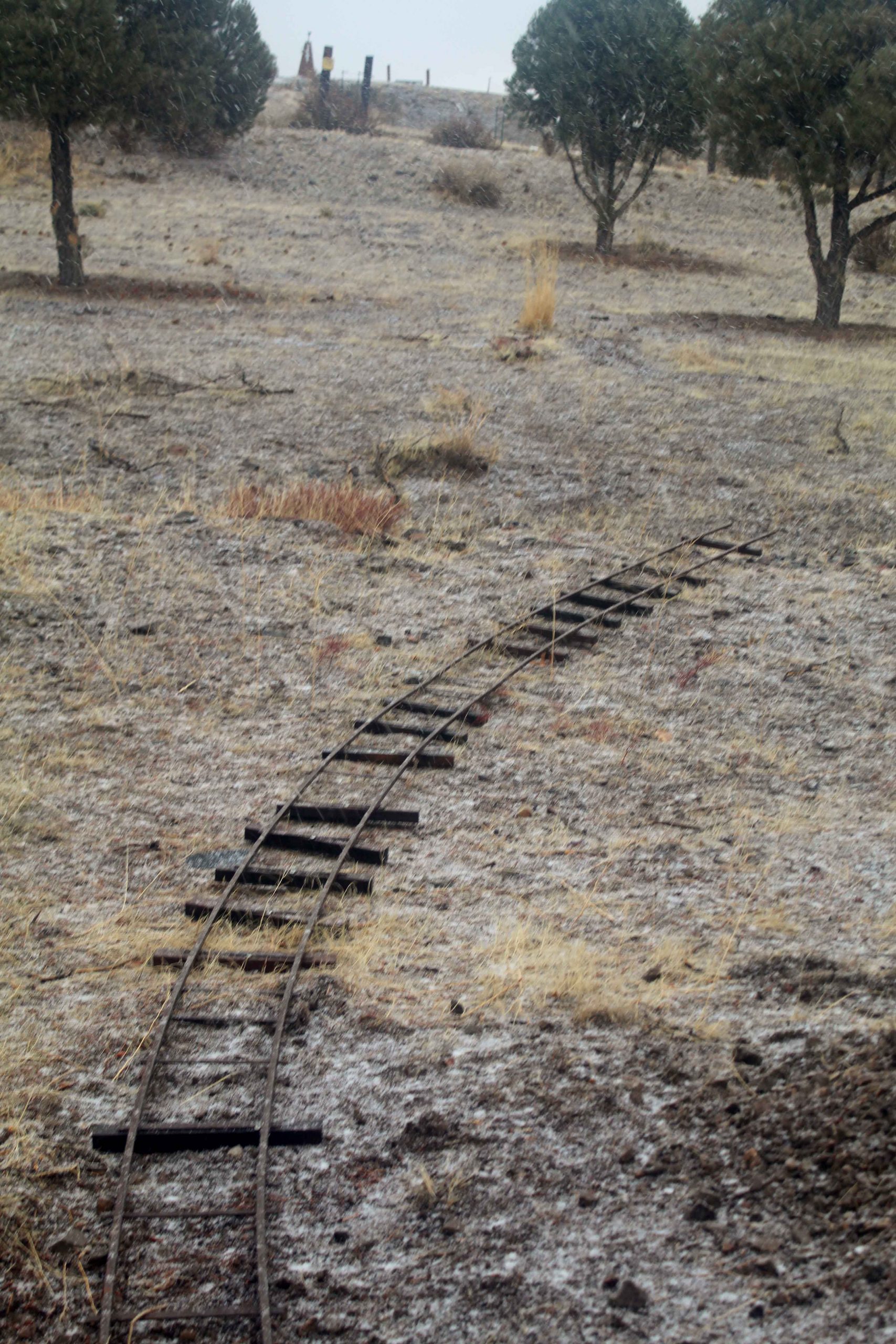 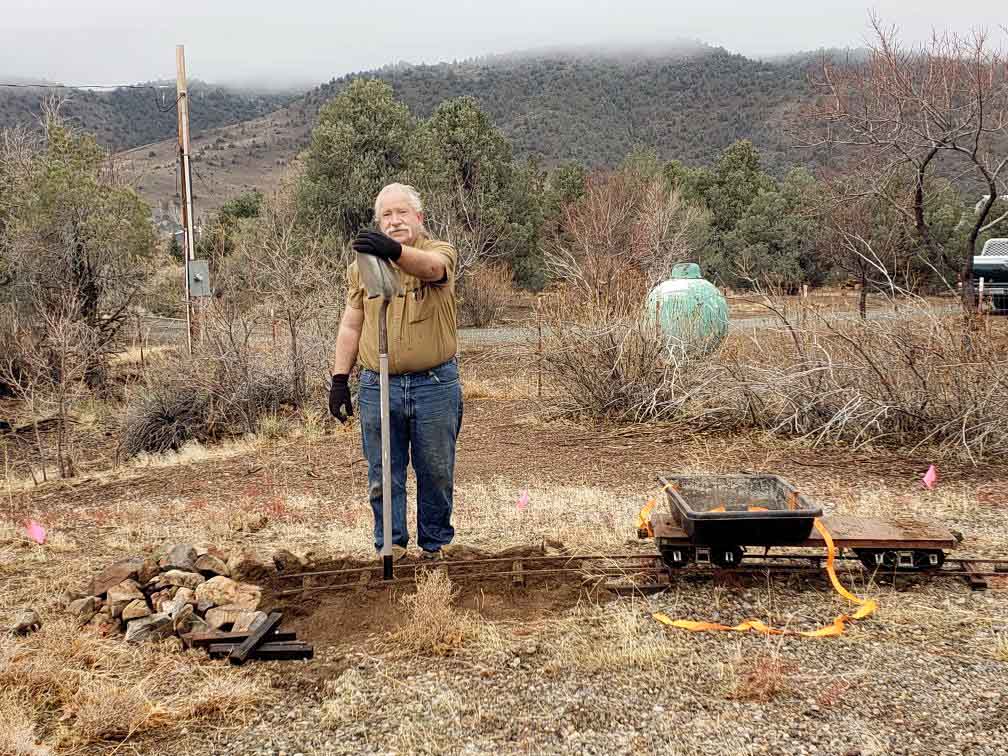 After the panel track had convinced me that my ideas were not quite as daft as one might think, I decided it was time for real track to replace the panel track.

Rail and ties/sleepers were purchased from Allen Models of Nevada. The manufacturer of the ties (also the switches/turnouts/points) is a company called Accu-Tie.

The ties are designed to hold the rail in gauge (7.5 inches). Their switch kits are precision engineered and go together very nicely — Yes, they do make things for 7.25 inch gauge as well.

The first purchases of the Accu-Tie products were made in January of 2021. 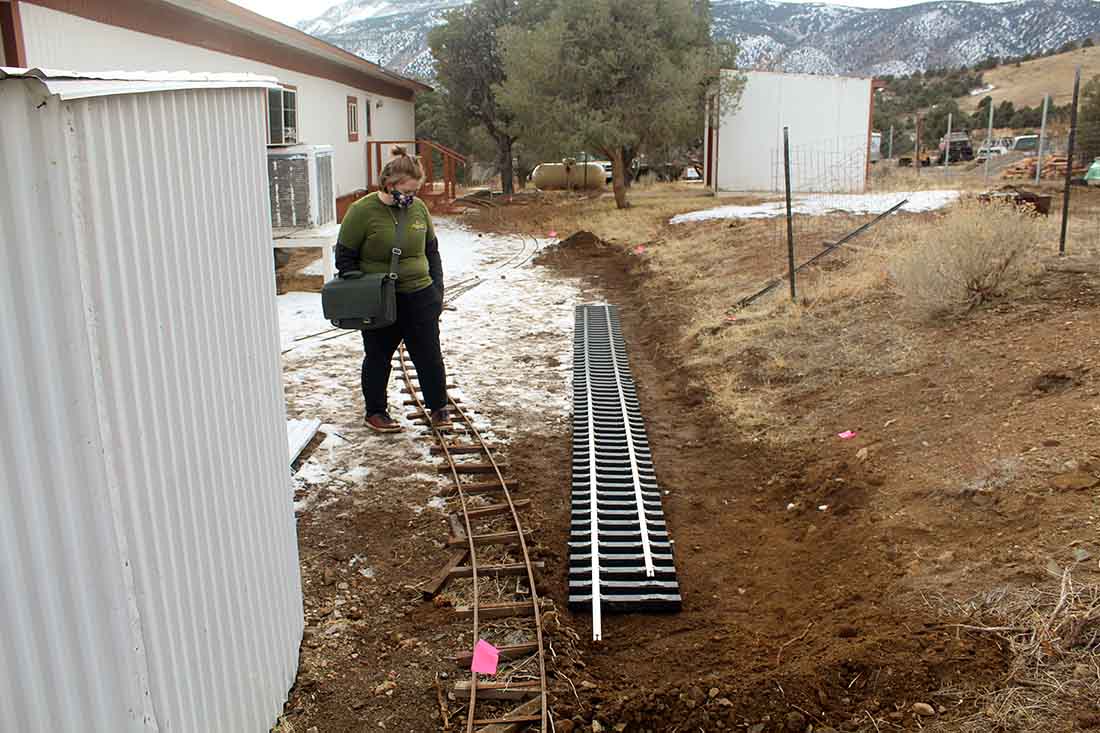 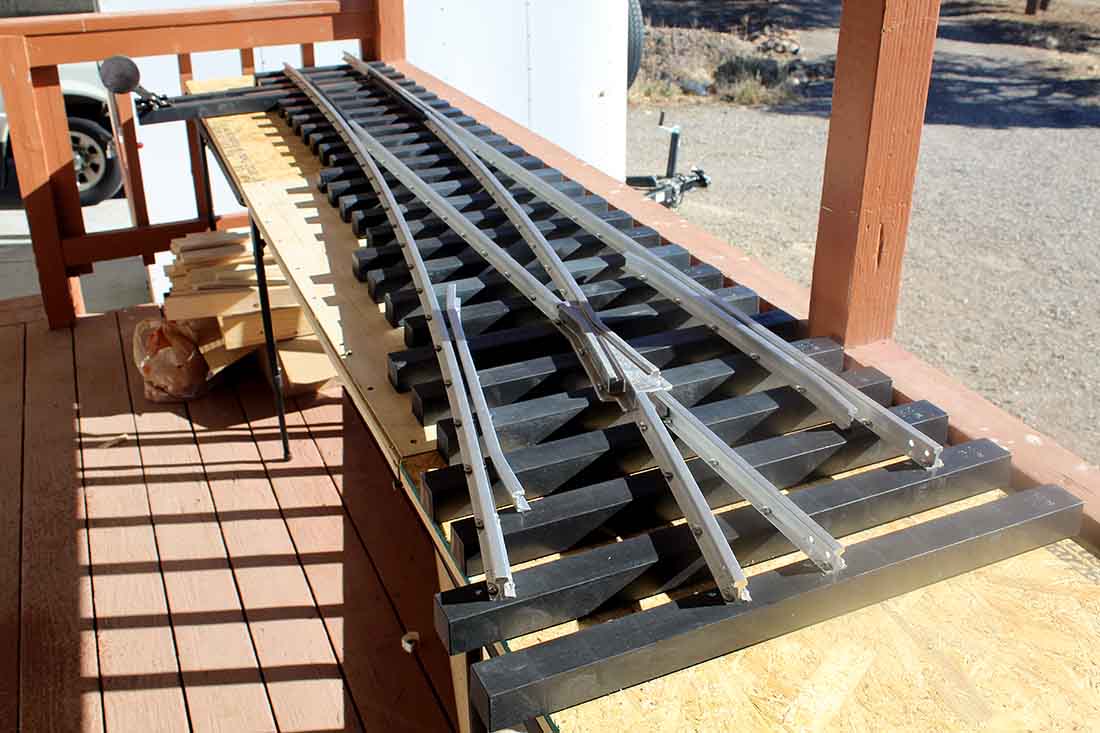 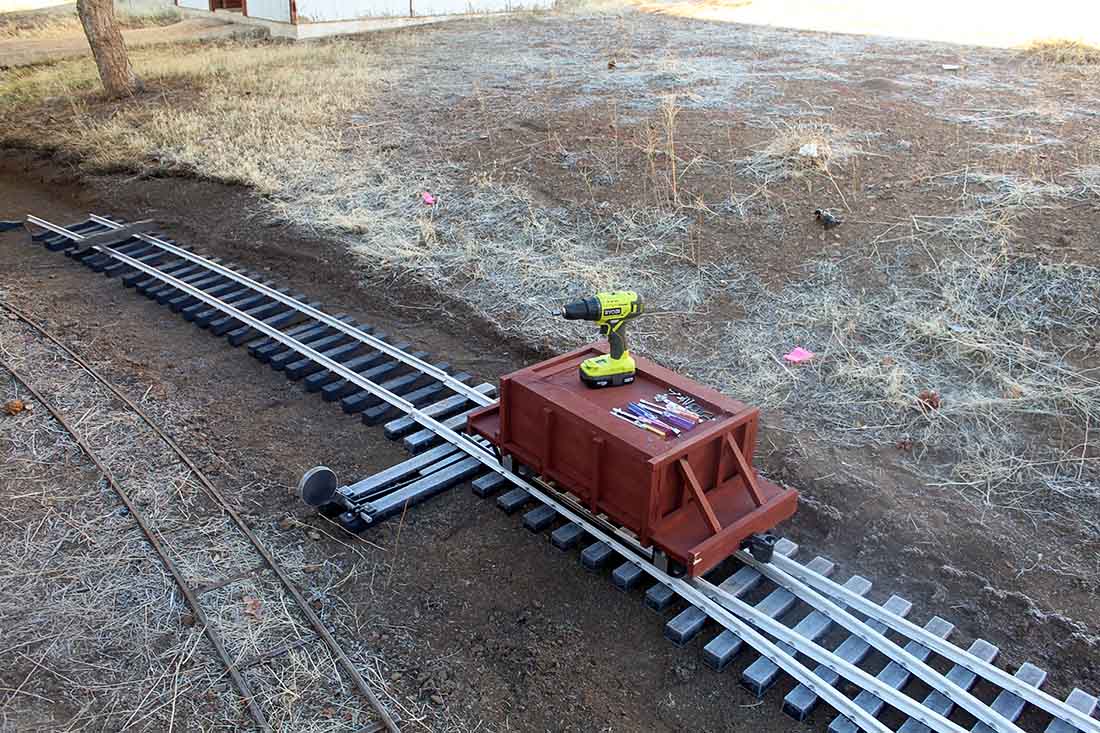 One of the the challenges of building my railway has been that the “flat” piece of property that I purchased isn’t.

I was used to the California definition of “flat”. By Nevada standards my property is “flat” even though it slopes substantially from the upper Northeast corner to the lower Southwest corner.

The geography of my property has meant a lot of digging and fill work. This is all done by the work crew of me, myself, and I.

All the earth work has been done by pick, shovel, and wheelbarrow. No heavy machinery has been employed.

I might mention that the soil has a lot of rocks in it. Fortunately what I call “rocks” qualify as pebbles when compared to other rocks on properties nearby.

I also made a screen to separate the larger rocks from the dirt I use for ballast. 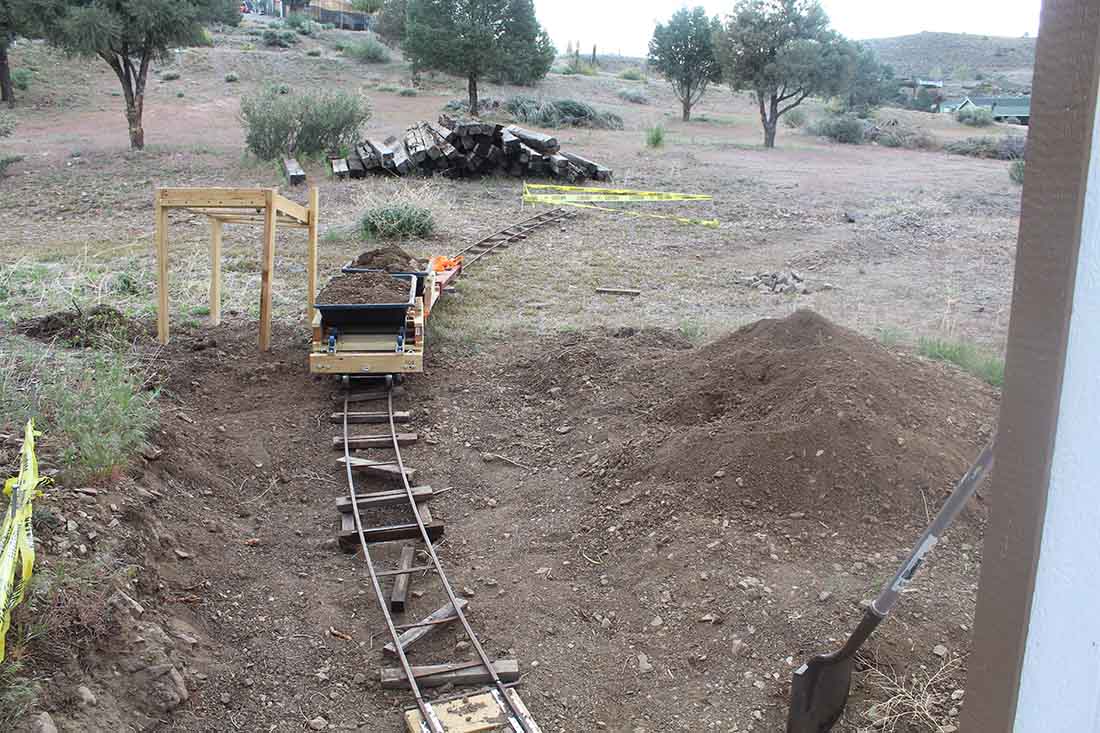 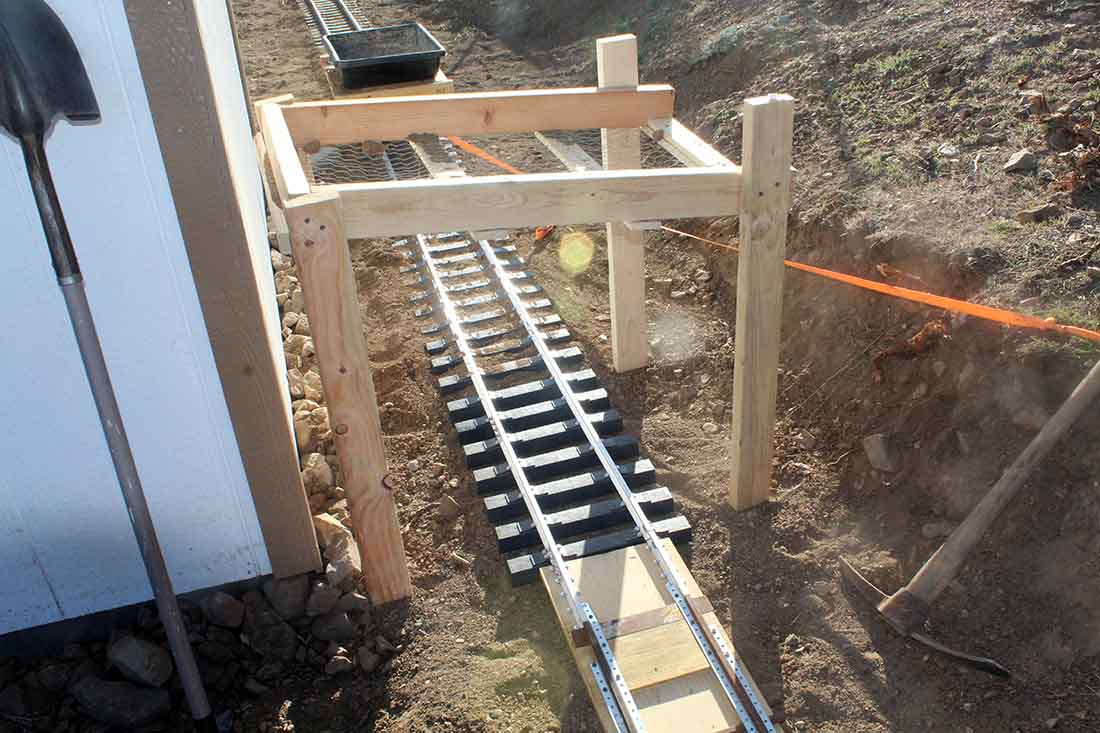 From the beginning, one purpose for my tramway has been to help me maintain my property.

Although I use the wheelbarrow a lot, the railway has moved its fair share of rock and dirt as well.

The line is unique in that it will soon have three turning wyes but no “run arounds”. This odd arrangement has been driven by the slope of the property.

The first of the three turning wyes went in around March/April of 2021. It was put in specifically to turn carloads of dirt and rock as I was moving the stuff from an area with too much dirt to an area I needed to fill.

I have done my best to keep the grades at 1.5%. While on a small gauge layout that seems gentle, it is a remarkably stiff grade when real dirt is being hauled and the load can weigh over 200 pounds. 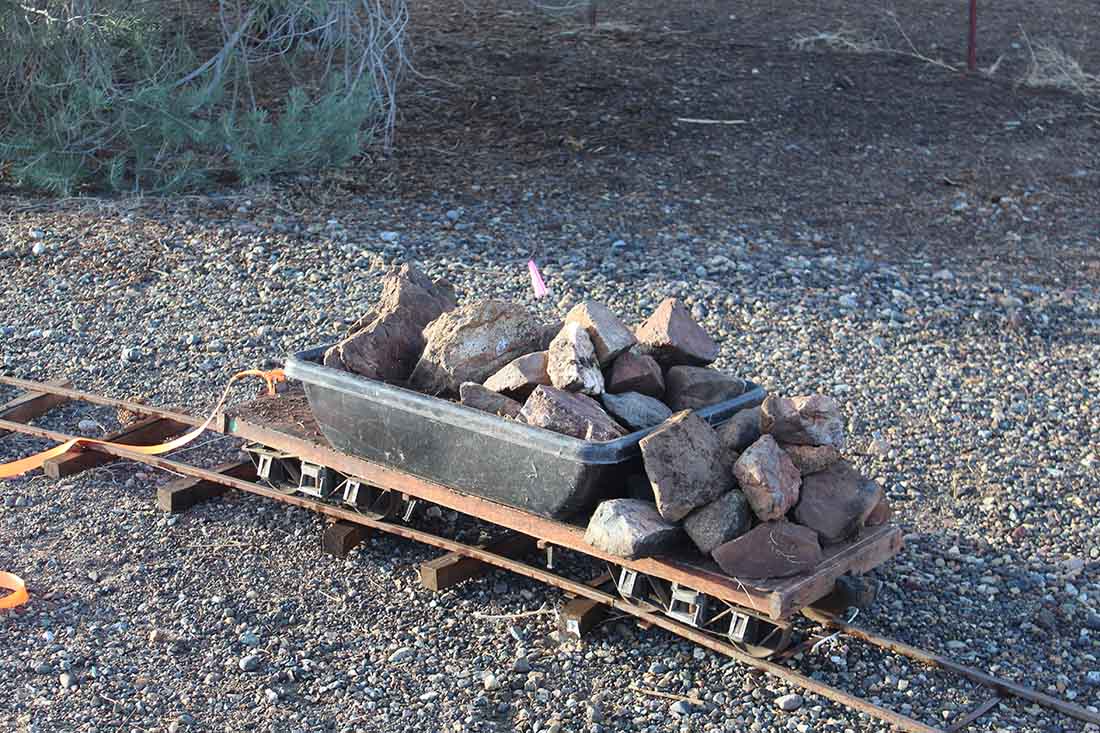 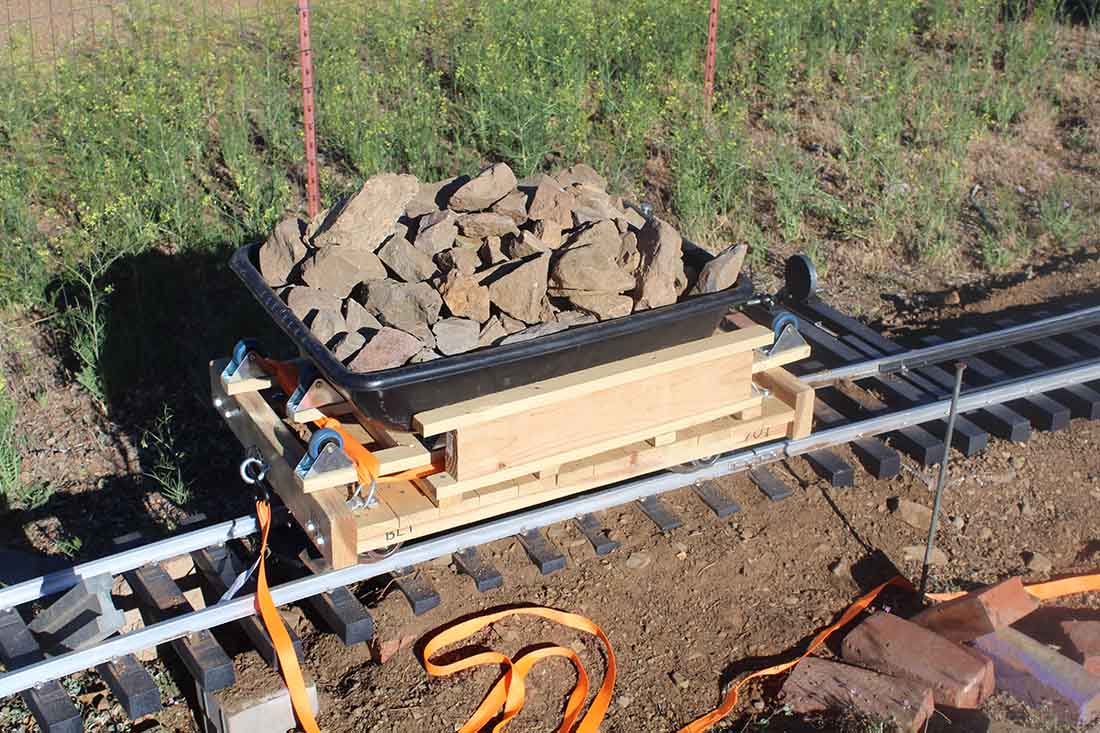 Most of the early work was done in 2021 with me only visiting the property either one or two weekends a month.

Some ideas worked short term and some had their own season. I had planned to use one shed for equipment storage as an example. The door to that shed made using it difficult so that was very short term.

Also the shed began to be filled with stuff I had in storage down in California.

Another idea was a track through my carport. The slope of the floor of the carport made that spur a challenge after a while and it was rationalized once I had cleared a space for a yard. Even the yard has changed a bit over time. 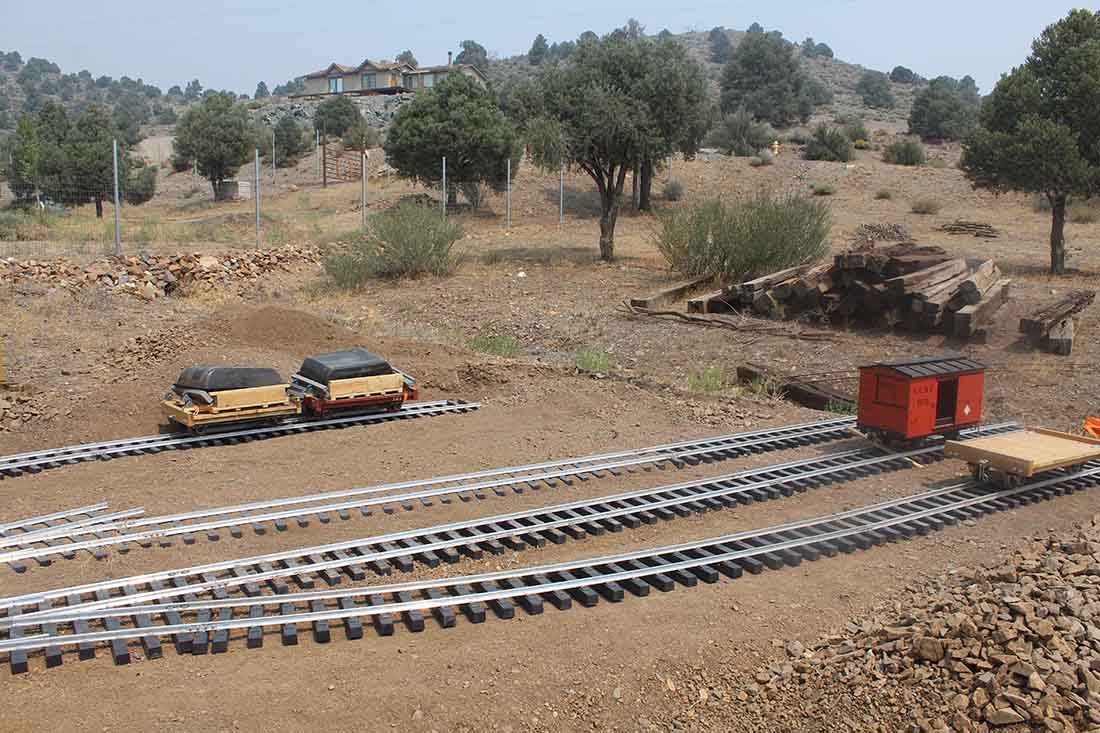 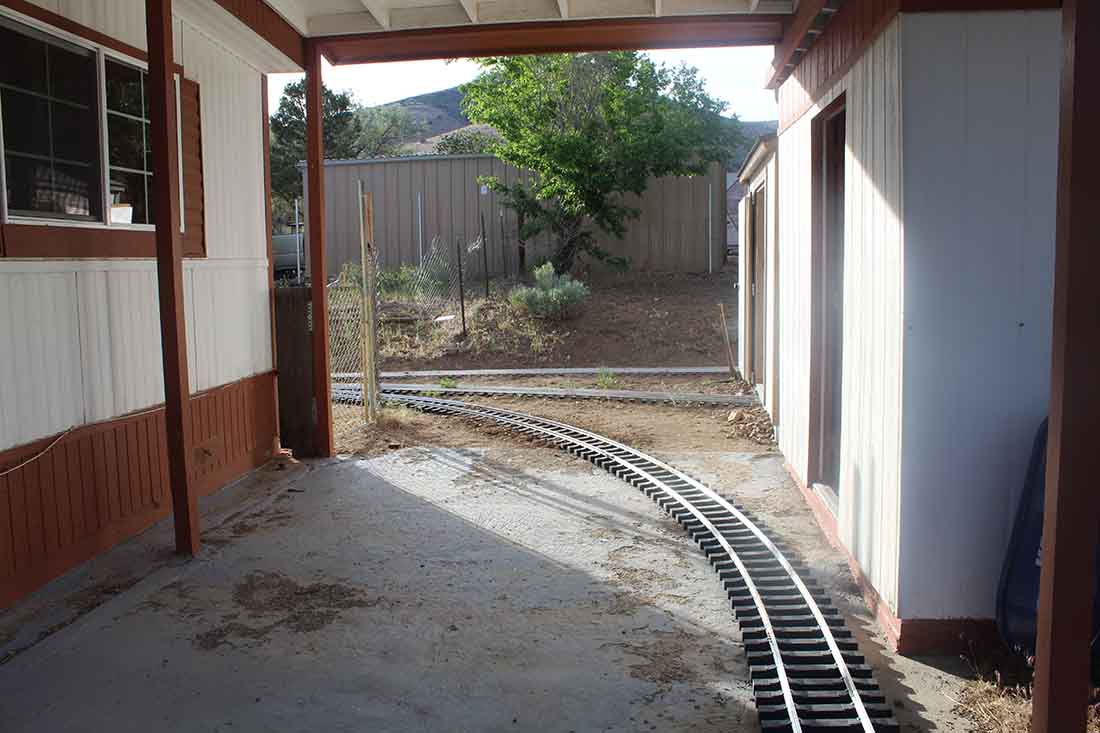 By September of 2021 I had about 300 feet of track on the ground. As part of that track there were eight switches.

One of my goals for the line was to be able to take my trash/rubbish to the front of the property. That was about 200 feet from the end of track at the time.

There is a mostly dry creek that runs through the middle of the property. It is a dry creek except when it isn’t. When the creek is running it can have a fair amount of water in it. A bridge was a necessity.

This was my first bridge and was constructed in September of 2021. 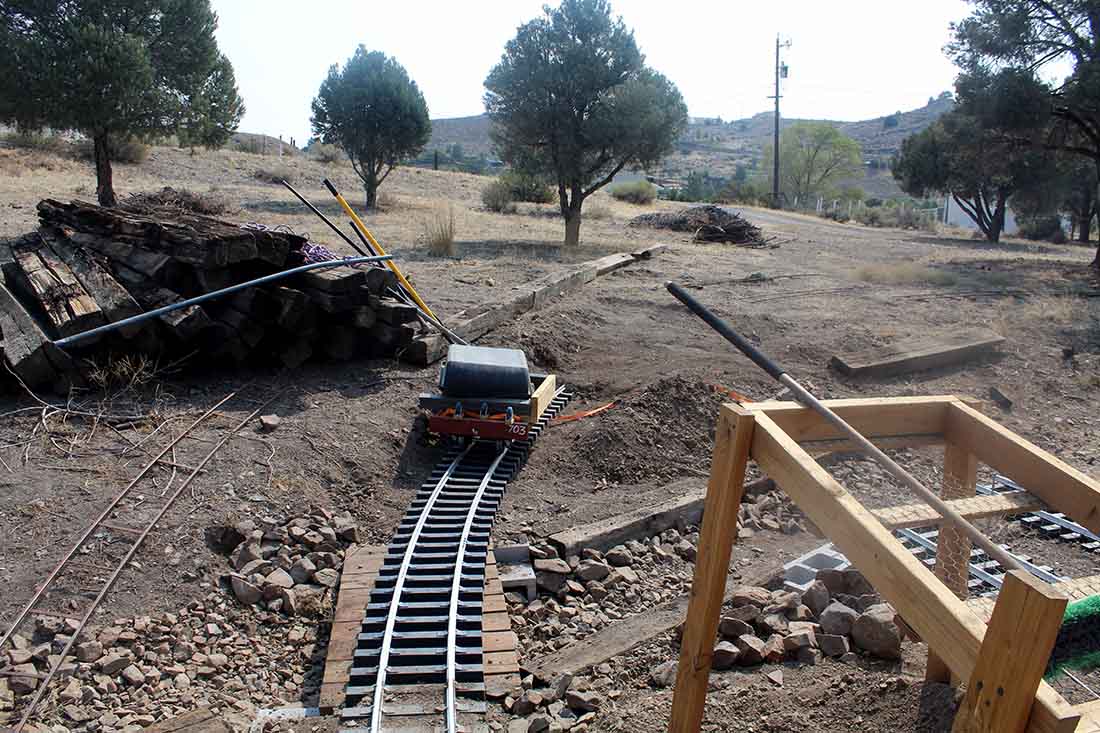 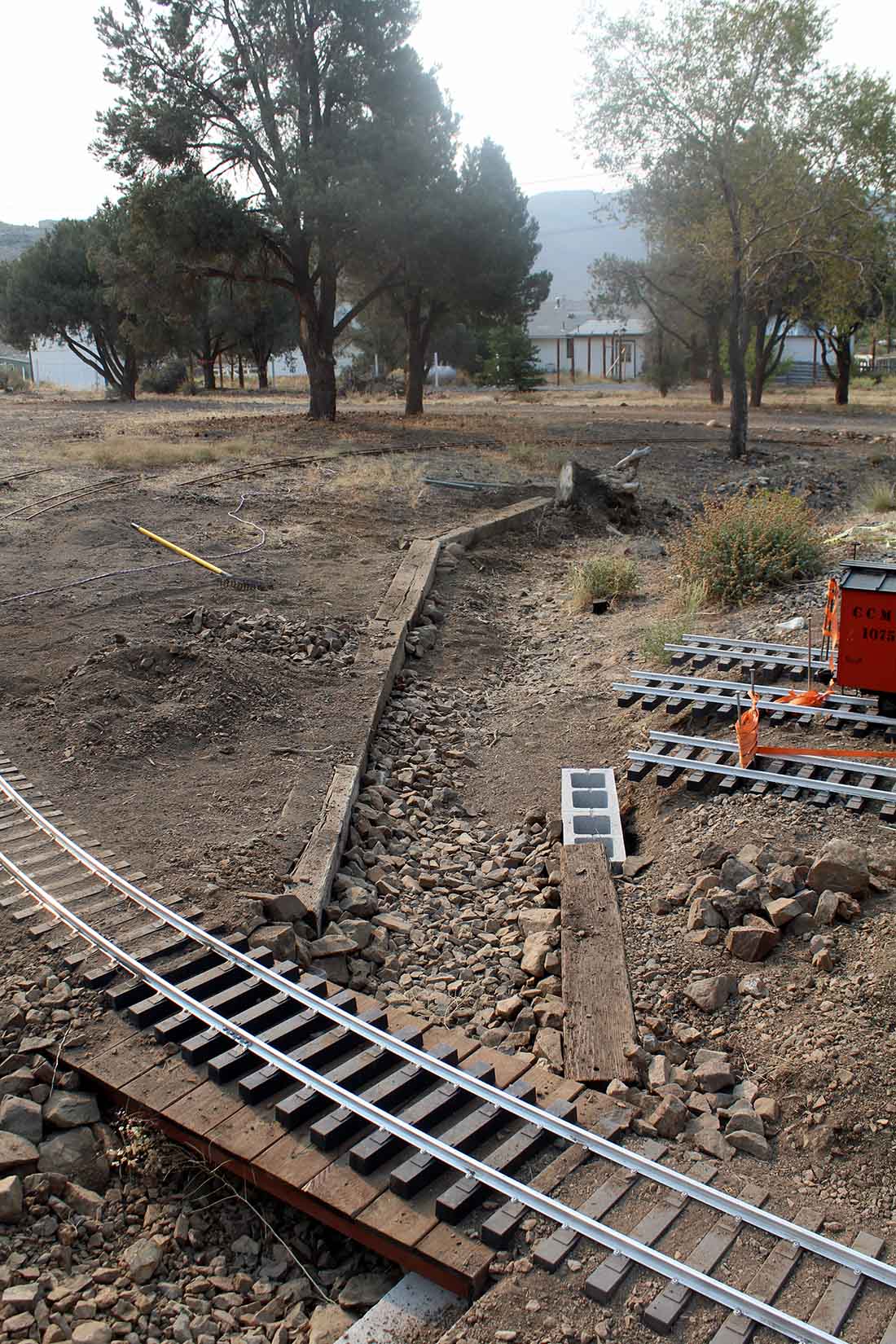 Once the bridge was in I could grade to the front of the property.

My second turning wye went in just past the bridge. With the second wye in place I could run wye to wye, fun.

While I had constructed a “locomotive”, it had some issues (I didn’t know it at the time but there was a warp in the frame.

Another issue was that I graded the line quickly and while it looked flat enough, there was a bit of 2% that I have since corrected.

I mention these little errors for two reasons, they happened and they are an opportunity to share a lesson in learning. We learn more from our errors than our successes.

In September of 2021 I also picked up a steam engine for my line. It needs some work but the price was right.

In October of 2021 I picked up an engine kit from Plum Cove. This became the motive power for the present. 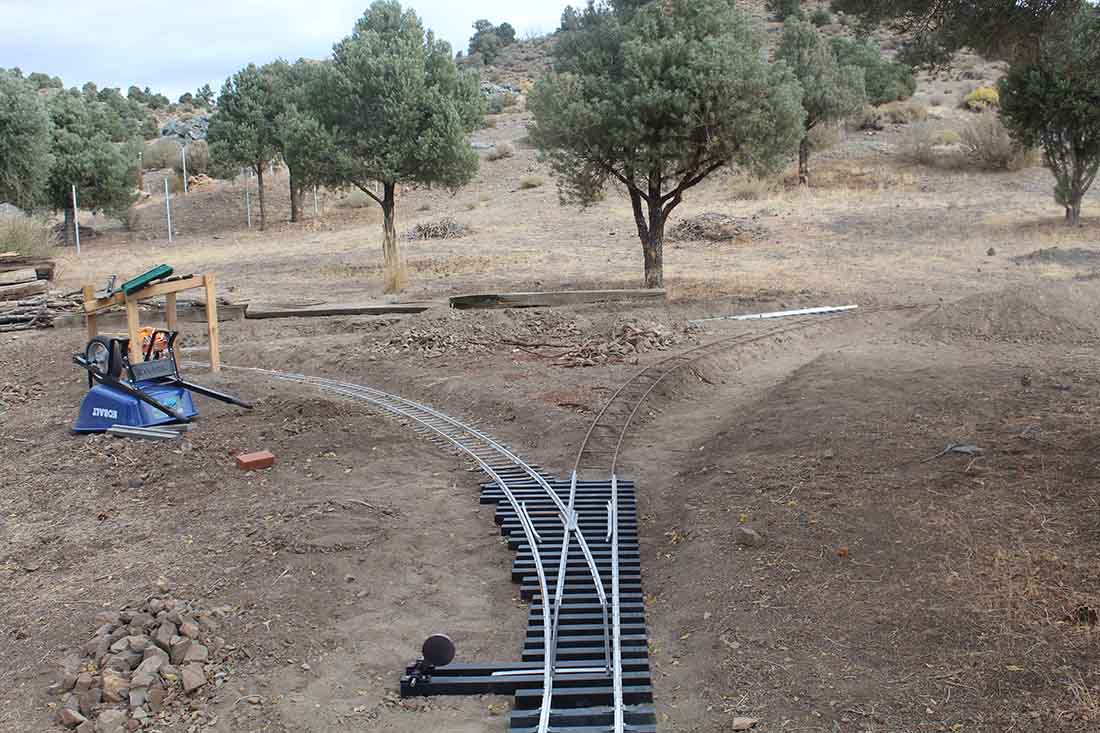 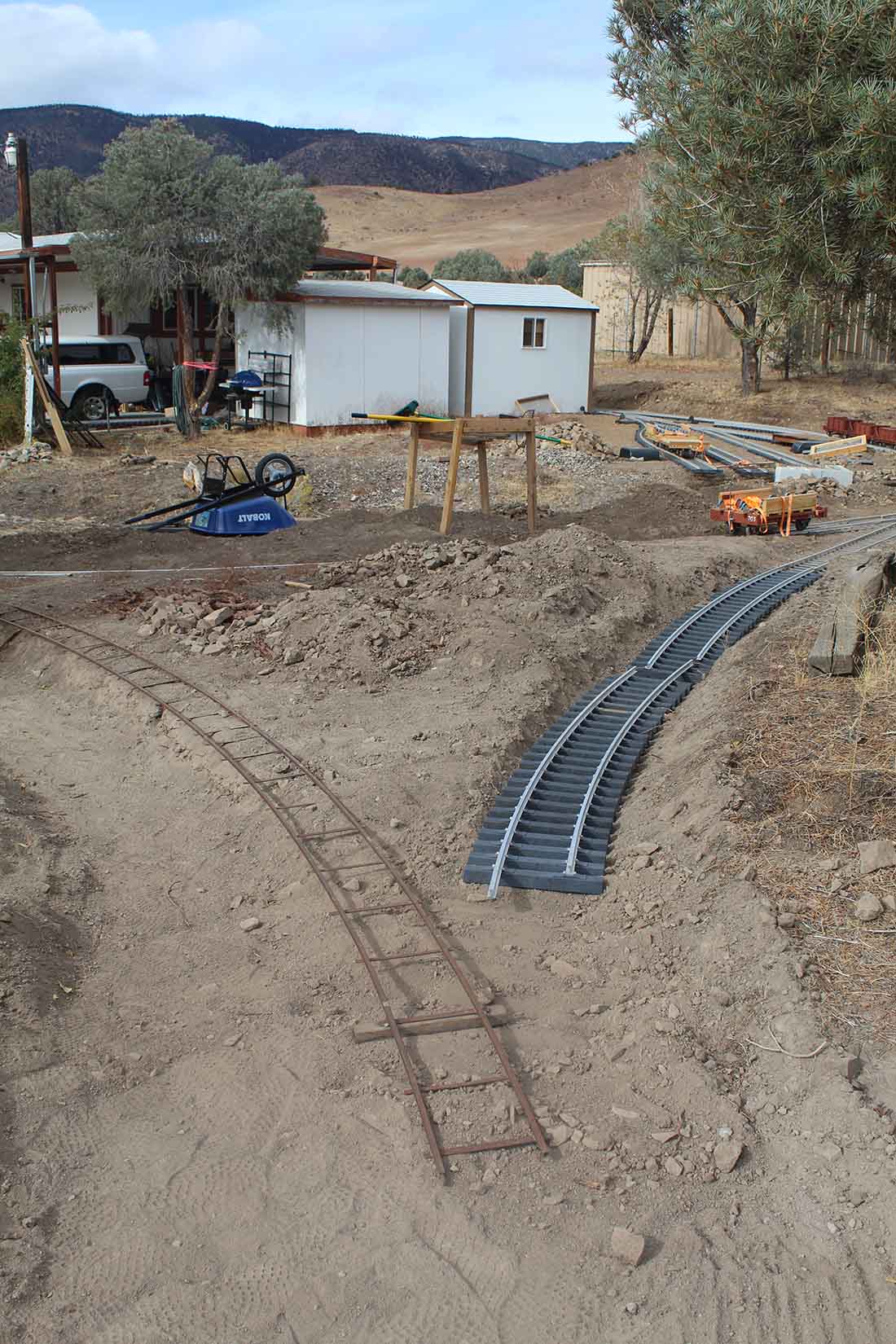 A little more of the line to the front of the property.

This track was in by the end of November 2021. With the roadbed graded I did put down 100 feet of track in one day.

November 2021 was also when I began living at the Nevada home full time.

In December it snowed. 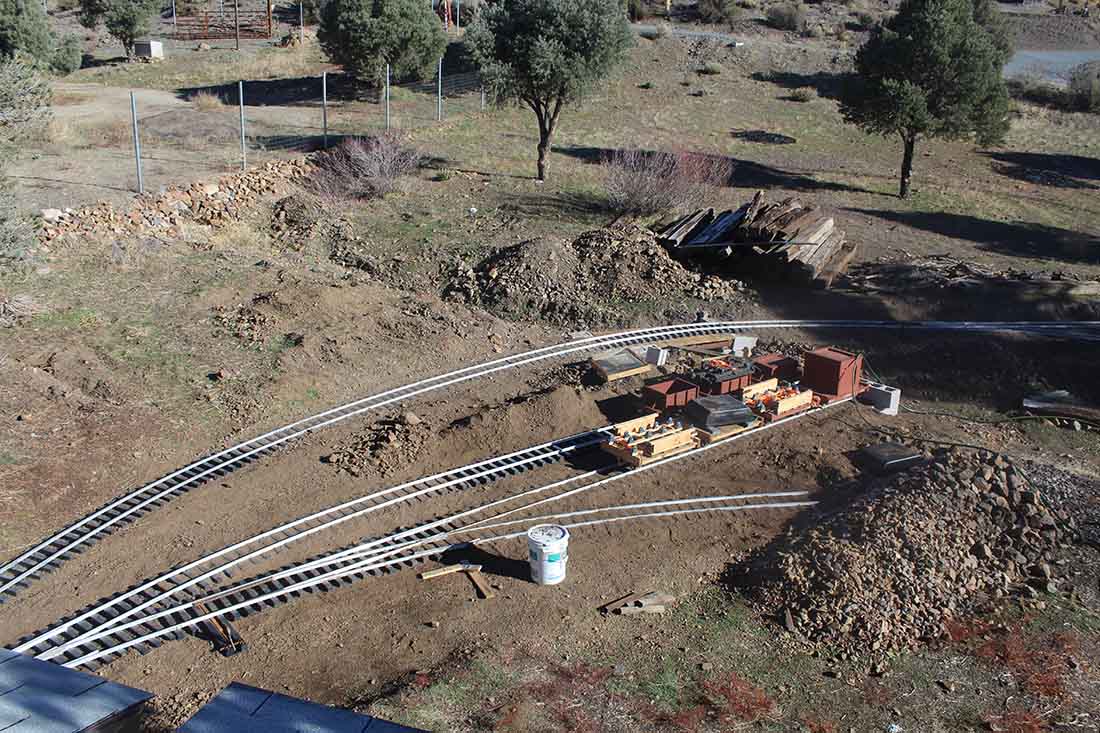 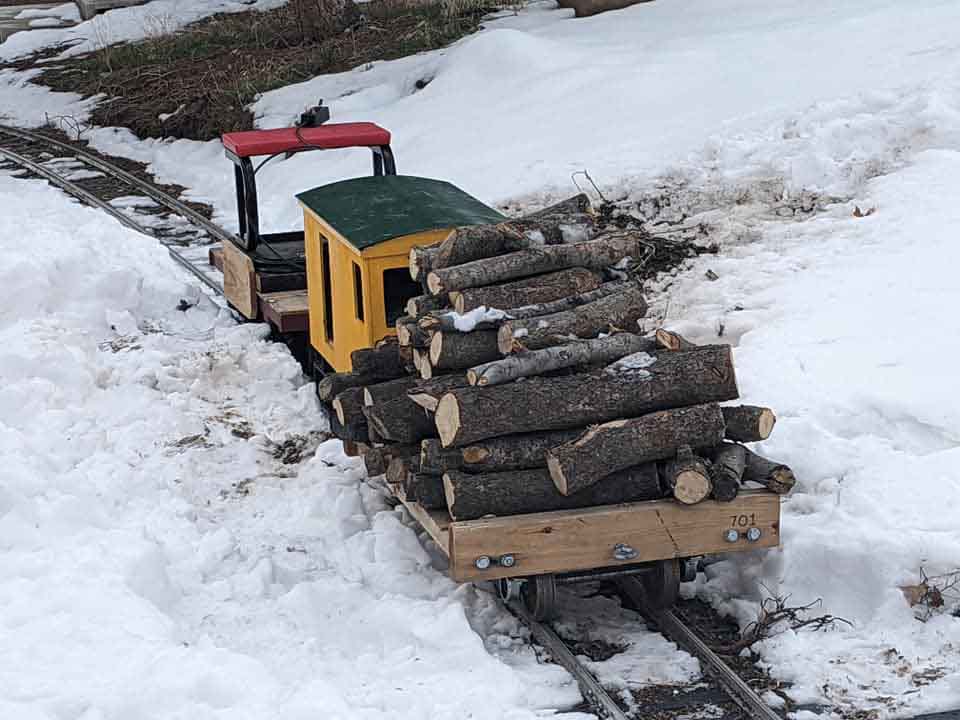 In February I ended up with the dreaded disease that shall not be named. All work slowed. As soon as I was out of quarantine I began on the railroad again.

I was able to cross the driveway and start working on “the big fill”.

This was the point that I could begin to see that the loop part of the line would be finished ahead of schedule. 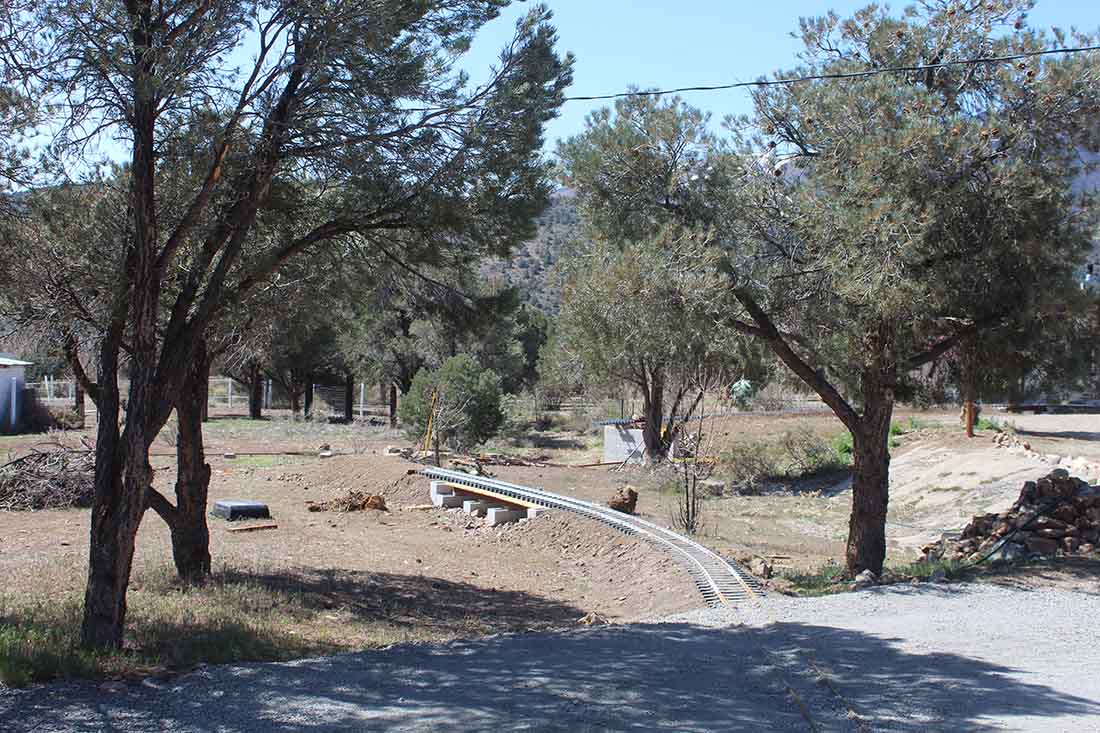 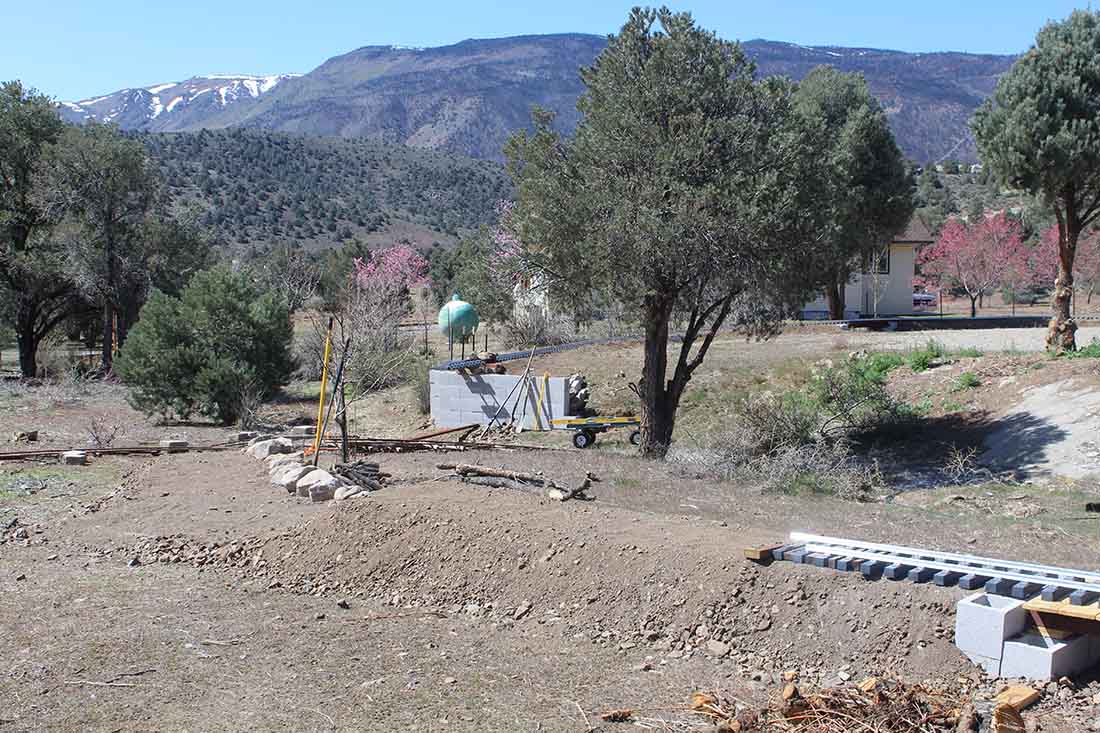 I worked daily on the fill, I could only move about five wheelbarrow loads of dirt per day. I also raided the roadside for “a few” large rocks. The rocks meant less dirt to move.

This is what things looked like at the beginning of June 2022. One might notice that while the track may span the gap, something is clearly missing! 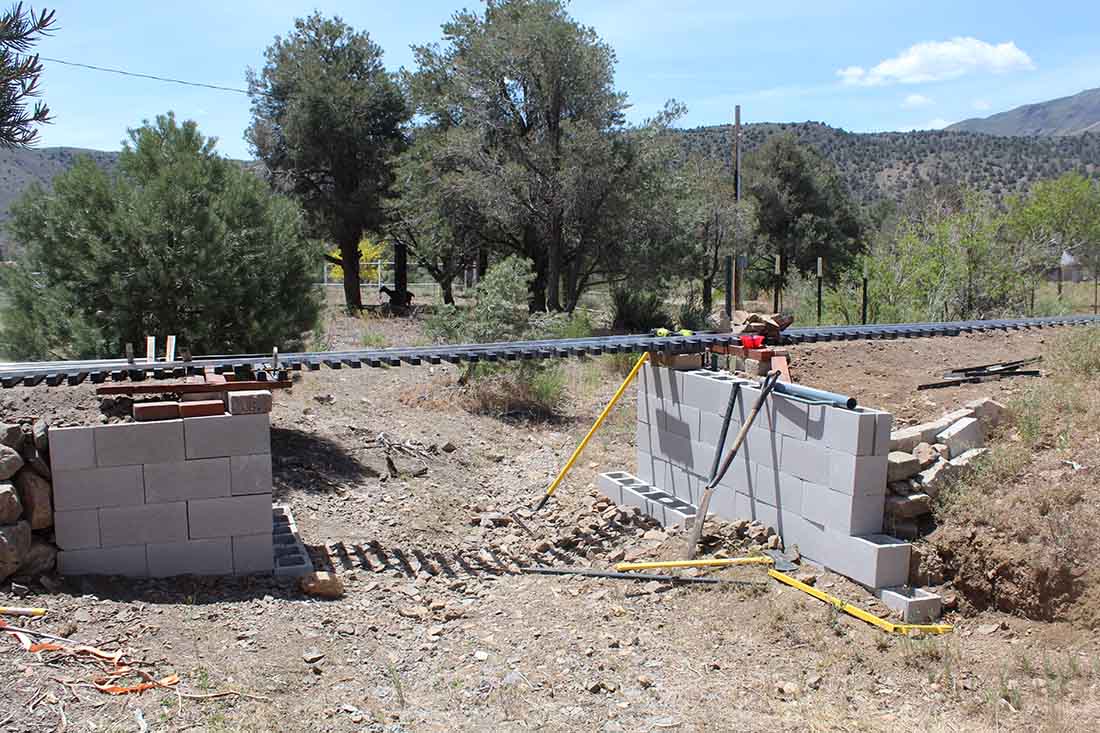 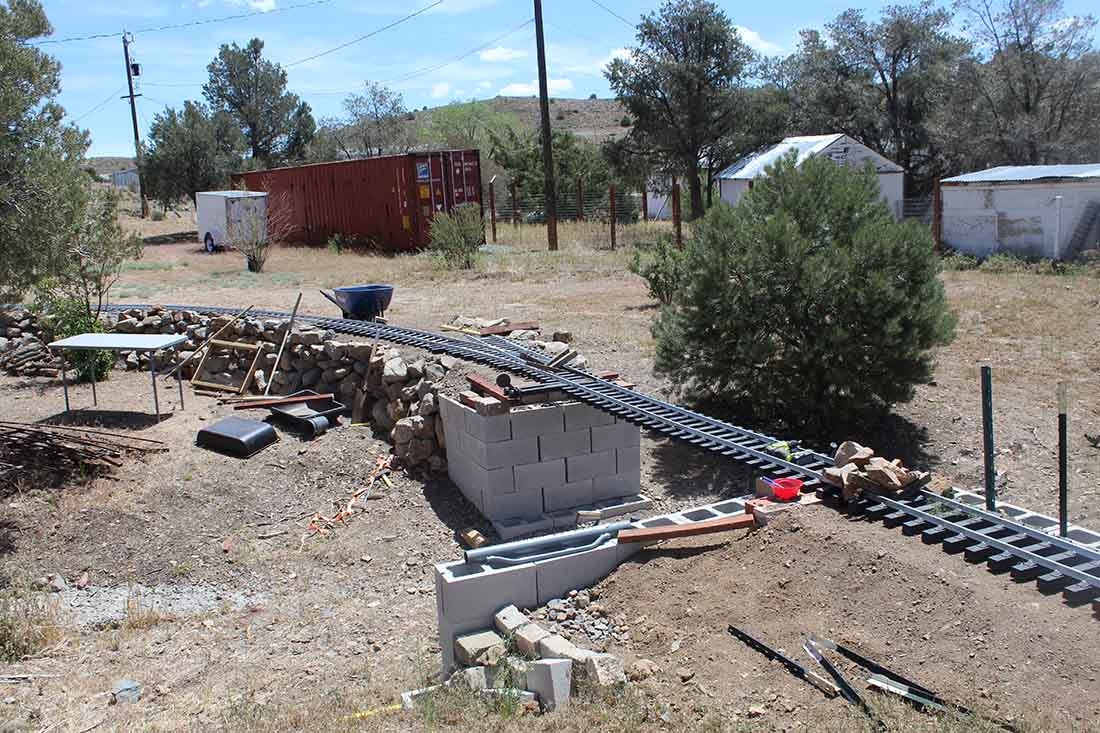 This is the highest bridge on the line and the one built with the heaviest timbers.

There is a lot of extra timber directly under the track as this is the longest unsupported span on the line. 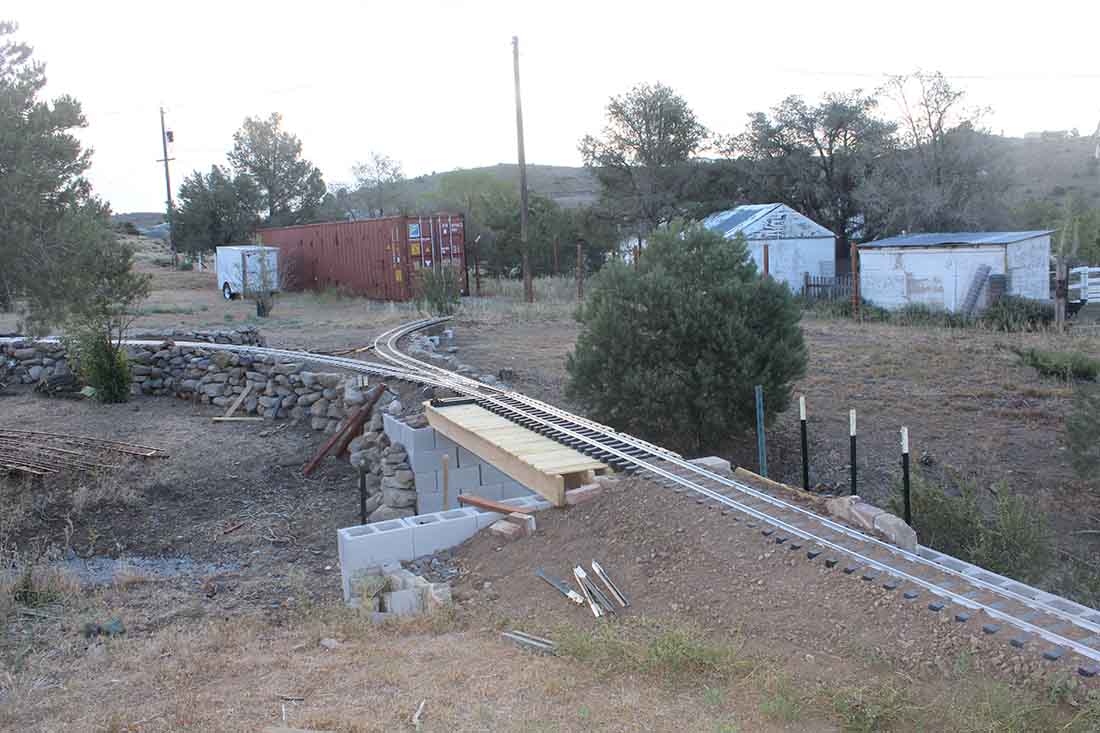 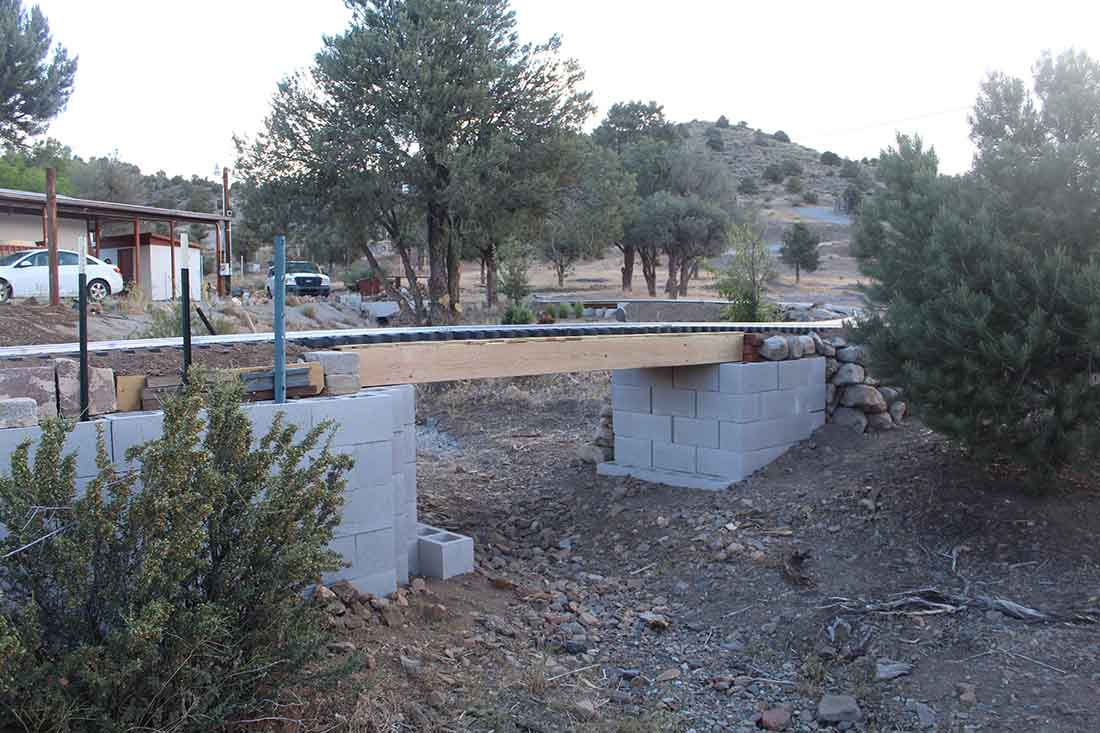 Presently I have two locomotives on the line that are worthy of being photographed.

The Plum Cove electric has a new body on it. I built this new body to fit my larger sized equipment.

My name for this locomotive is the Washoe Zephyr; It goes like the wind if I let it.

The video of the tine was shot from this unity with a GoPro camera clamped to the back of the roof.

The other locomotive is an Allen Models Chloe based on Ward Kimball’s locomotive of the same name that is now at the museum in Perris California.

I acquired the locomotive second hand and it does need some plumbing work done before it can be operated safely.

While I am doing the plumbing, I intend to replace the boiler jacket and the cab.

She will be renamed but I have not decided if she will be Nani (Beautiful) or Wahine (lady). Both names are Hawaiian. 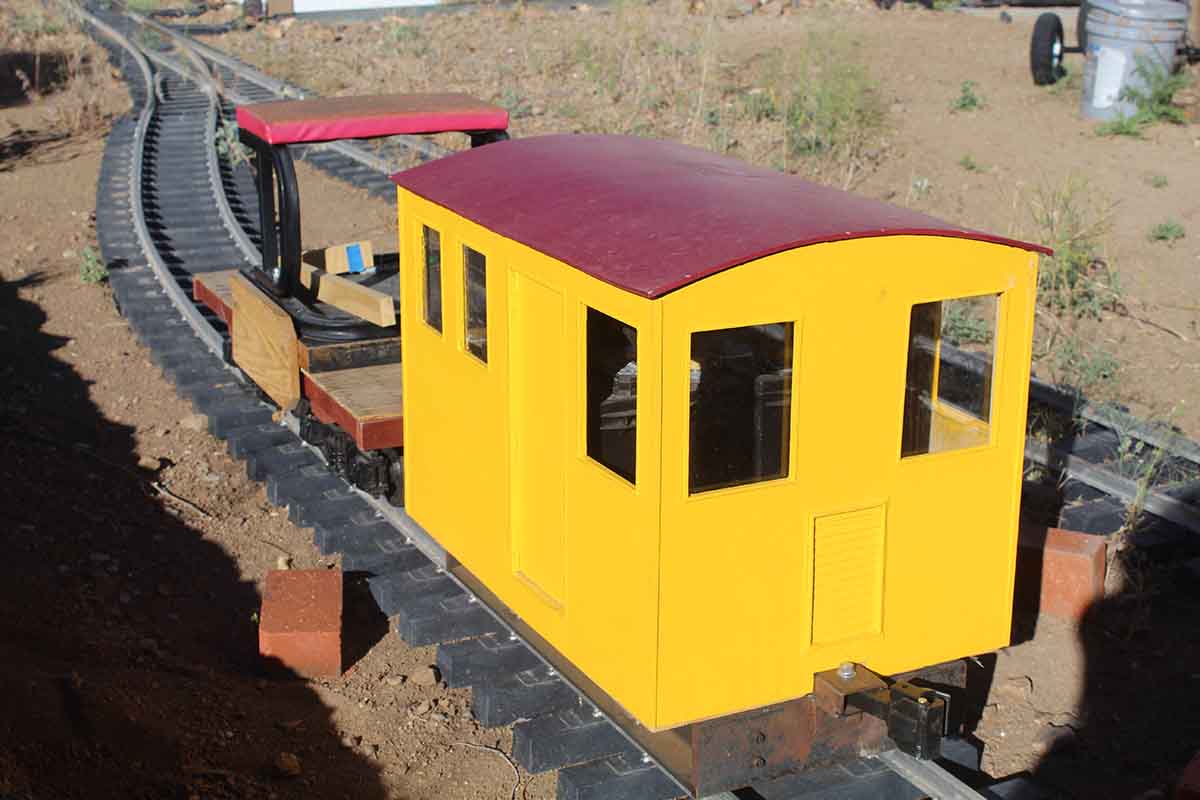 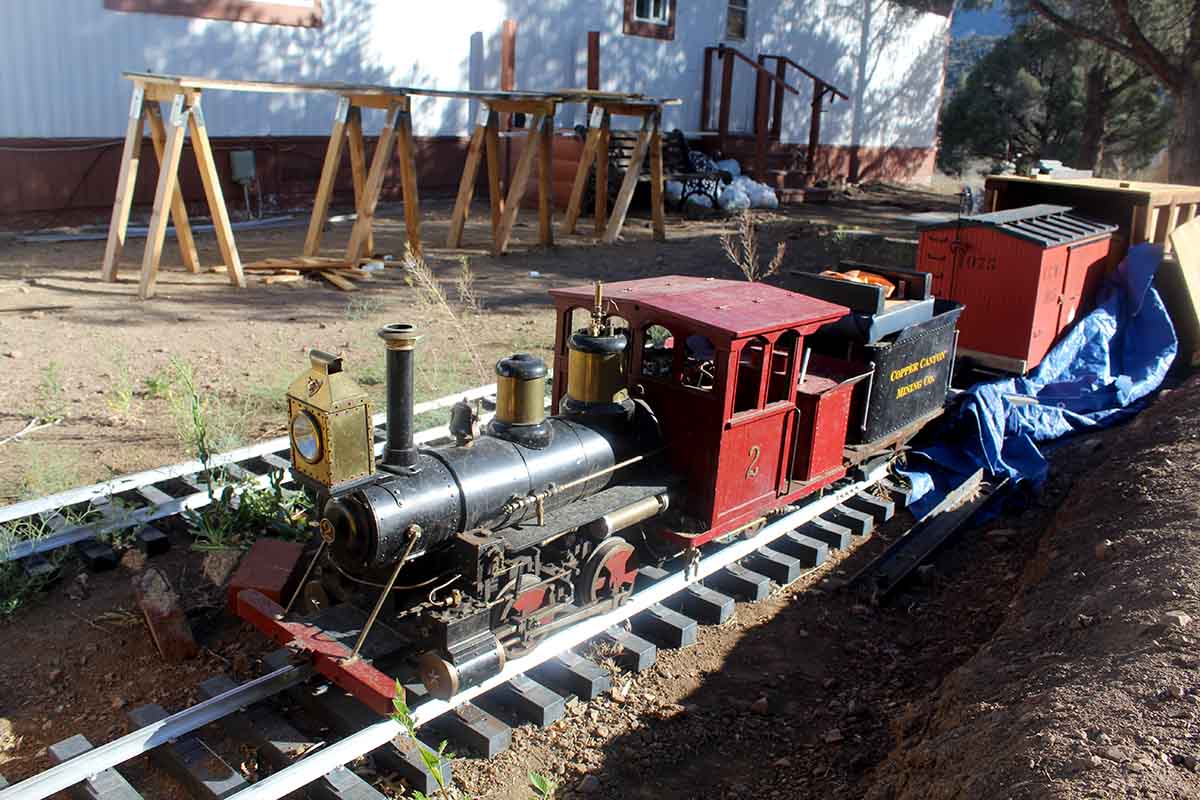 Some may be wondering what the trackplan of the Breccia Light Tramway looks like.

Well the railroad is not finished yet and a few changes are still taking place. All to the good.

Here is a trackplan of the railway as it currently is. The line in red is still under construction and already there is a revision.

In the plan I prepared about a month ago when someone asked me what the railroad looked like I planned a small yard on the north side of my Conex storage container. Because my planning was done with the panel track that has a 30 foot radius but the track I am laying has rail curved for 32 foot radius, changes happen.

The line that is on the north side of the container will now be on the south side.

There are several benefits to this change: the first benefit is that I do not need to go to a tighter radius!

The second benefit is that it will be easier to roof this over to provide storage protected from the snow.

The third benefit will be that this can be extended into creating a longer loop for operation.

Should I choose, the longer loop that is possible would give me several new choices to keep operation interesting.

It is all a work in progress. 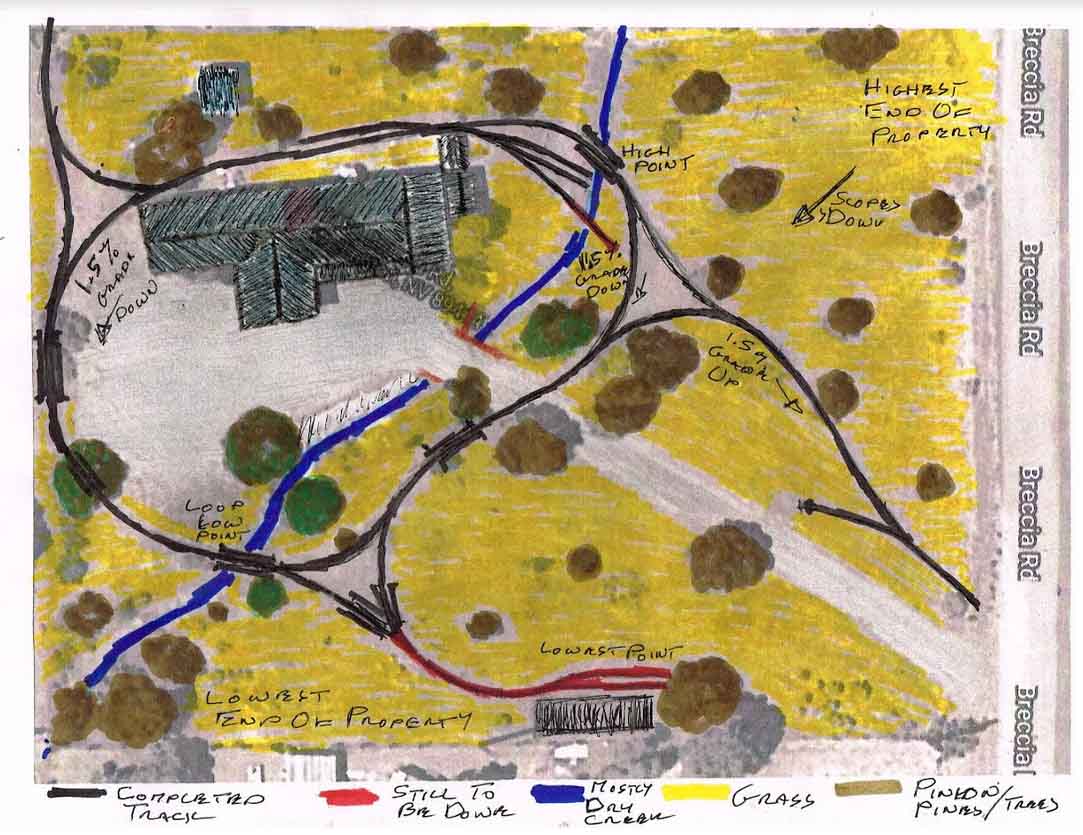 Hope you have enjoyed the story so far.

A huge big thank you to John, and I hope you enjoyed his small gauge railroad as much as me.

If you missed his cab ride video, it’s here.