just to update you on the progress of my layout. I have just completed building a new Metcalfe loco shed with a stone finish to match the station. It’s a very sturdy building and can recommend it.

I have also constructed a high level double track circuit so I can run-in new locos, or test ones that have been serviced. I can’t really run them in properly with an end to end layout. I did mention that I’m not a great fan of ’roundy roundy’ layouts, but I must admit that it’s nice to see longer trains travelling at some speed at eye level. I plan to fit a backscene at some time but don’t intend to put full scenery on it.

Having built the high level track, The lower ‘South Wales layout’ was in its shadow, so I bought som LED 5metre strips and fitted them under the shelf. It makes it a lot better. 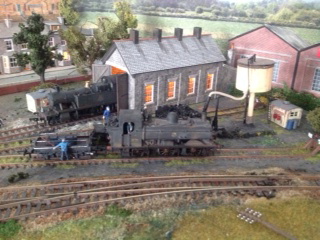 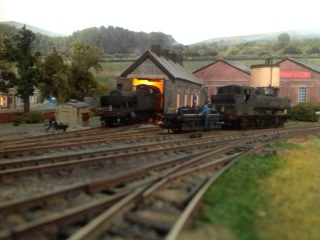 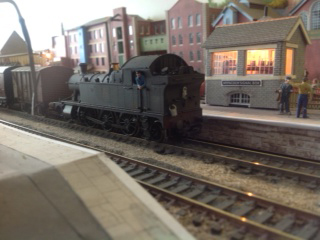 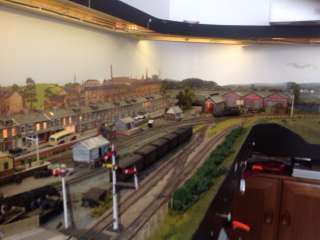 I have been following the amazing Dave’s remodelling of his attic layout with great interest. In a recent instalment Dave was showing a little transformer he used for powering his LED street lighting and this obviously has many uses for stations signalling etc where LEDs can be used.

I teach simple electronics to teenage children at GCSE level in the UK. One of the things they need to know is which resistor to use with an LED and this depends on several factors;- The circuit voltage, the LED forward voltage (how much voltage the LED needs for optimal performance), The LED forward current (how many milliamps the LED needs for optimal performance) and how many LEDs you wish to use in your circuit.

LEDs used to be fairly standard at 2 volts and 20 milliamps but with the advent of larger and super bright LEDs this isn’t the case these day and the more powerful LEDs can use up to 3.5 volts. As a rule of thumb a 330r resistor will protect any LED connected to 3 – 12 volts DC. So if not sure, use one of about that value.

You will need to get the information on your LEDs which should be available from the manufacturers or distributors People such as Rapid Electronics, Maplin, Kingbright, etc are a good source of information.

Thank you for keeping my interest in model railways going if only as an observer of other peoples’ talent.

Big thanks to Alan and Paul – some good LED advice there. Keep ’em coming.

That’s it for this time.

Don’t forget the Beginner’s Guide is here if today’s the big day when you make your start.