Another brilliant layout from Andy

Some time ago some friends and I were discussing what we could do to capture the interest of the young and old. The advent of video games and “green screen” technologies produces a realism that really ups the stakes for today’s modeler. If we cannot capture and inspire then the younger generation will just move on to something that does. So how do we do that?

As such I like to build modules that capture the imagination, whether it is in the details or the entire scene. Some are serious modules while others are meant to be “Out of the Box” One such module is my “War of the Worlds Module” this is a double module (single wide) and it brings the 1953 George pal version to life with the 2005 Steven Spielberg version. You would be surprised at how the module starts some conversations with the young and old alike. Grandparents telling their pre-teen and teenage grandchildren all about the original and its effects on society then, Grandkids talking about the walkers and how the effects are so much better (of course) but yet did not have the impact of the original H.G. Wells radio version. Lots of attention grabbing and questions, lots of interest and after all that IS what we are shooting for if we want the hobby to continue.

The Module started out with a double bridge and I had to come up with a way to make the ships seem as if they were flying. I used baling wire and some woodland scenic trees and produced a stand for each. I needed to be able to run the fine wire (magnet wire) down the trees and to the “Strobe” module and the power source below. It is easily covered with the foam from the trees. The strobe module comes from “Iron Penguin” and is actually a welding strobe but works great for this purpose.

The walker is a Pegasus models offering and I built in a few “extras” the most obvious is the LEDs and SMLeds (look at the pincers) these were a meticulous labor of love and took some creative wiring to get it all into the shell. Along with that I added a “wireless: camera” that transmits to a receiver that puts the Pilots perspective up on the screen. People can watch the trains as they pass under the walker and through the bridge. I still have not figured out how to create the “Train on fire” from the movie but I am working on it. Here are some pictures of what I have created on this one module. 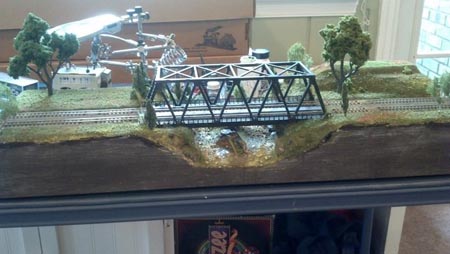 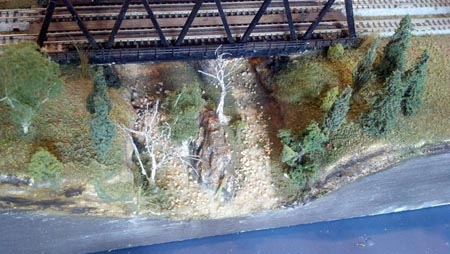 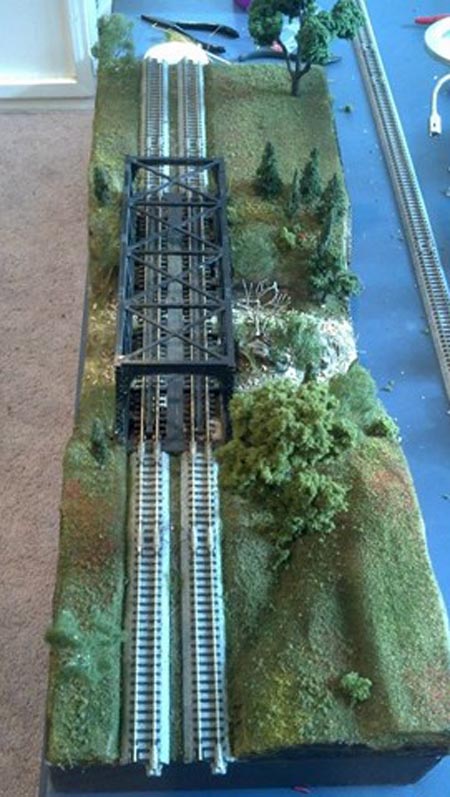 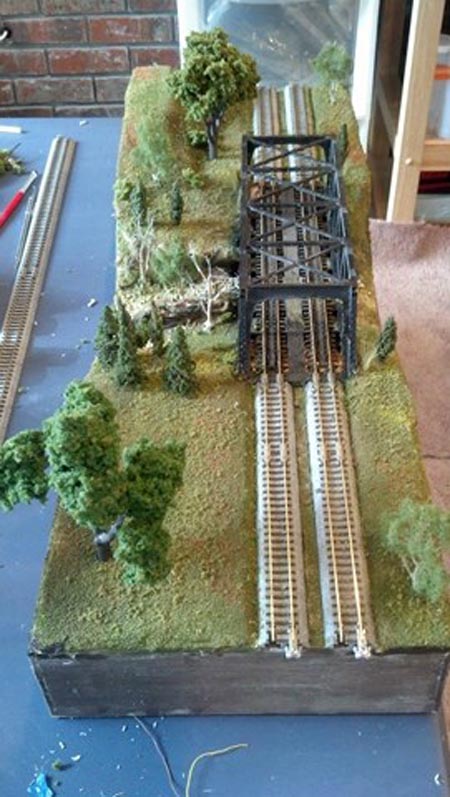 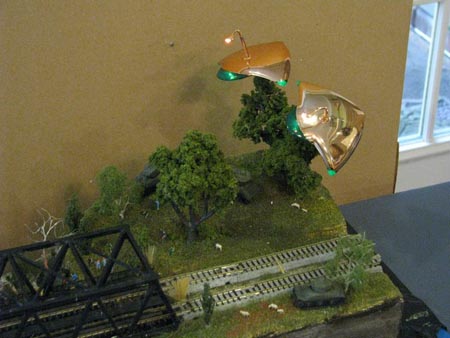 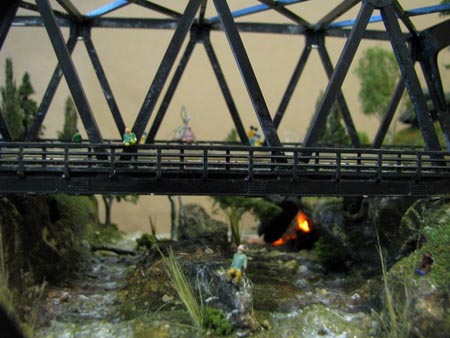 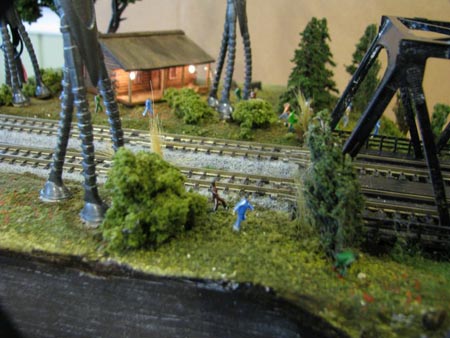 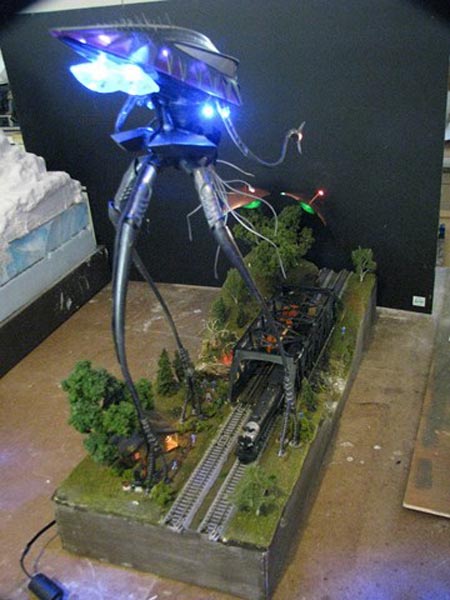 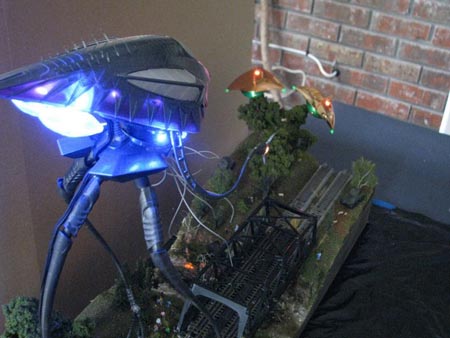 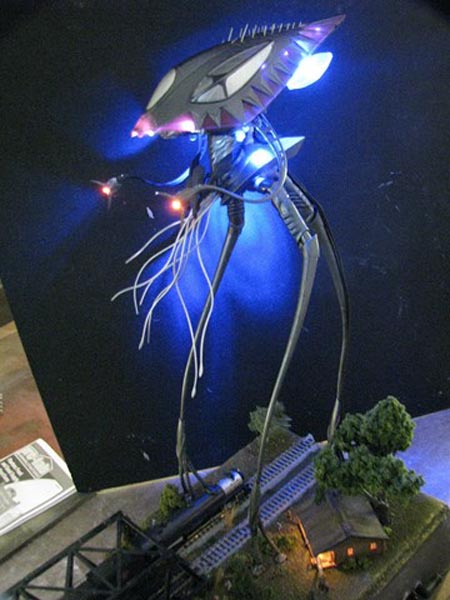 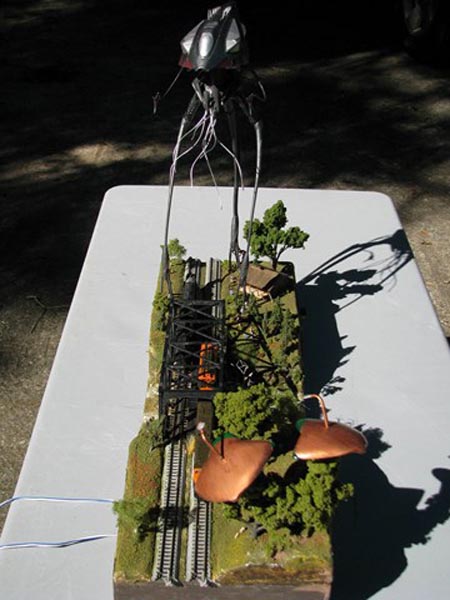 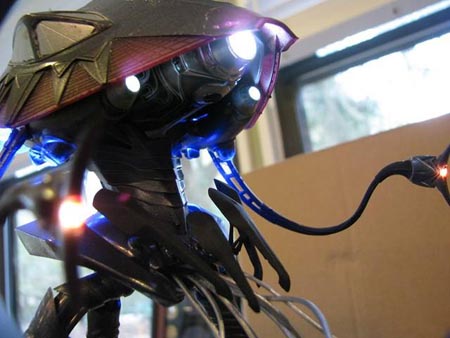 Just loved Andy’s take on War of the Worlds. And to crow bar it in to a layout, too – genius!

Don’t forget the latest ebay cheat sheet, which is here. Now’s the the time to bag a great deal.

29 Responses to Another brilliant layout from Andy