Dean from New Mexico has been back in touch with his Atlas track plans:

“My last layout, the Scenic Ridge, is pretty much complete, and it’s time for me to start on my next layout, another small railroad.

Today I’m going to talk about my design process using Atlas Track Planning Software (ATPS) and the design I came up with.

First, here are the design criteria I developed to help in the process:

Support for a yard engine to

Use flex track for better realism

Here’s how I started the planning process. Many people begin with a simple oval. It’s an easy layout, but it’s kind of boring. 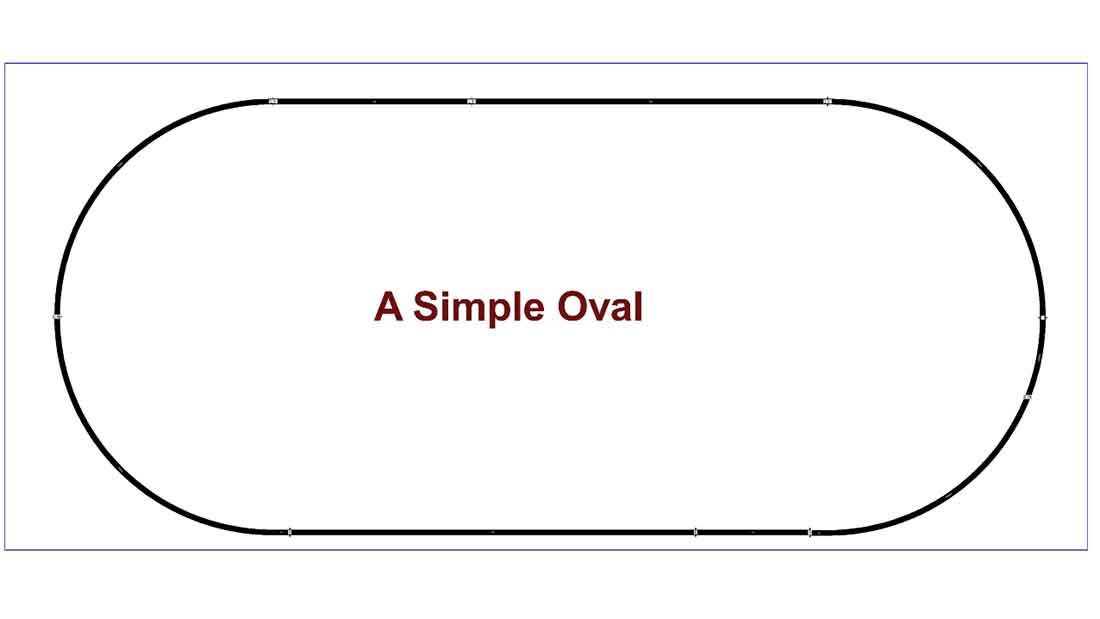 Here’s a second start—adding curves and tunnels or other features makes it more interesting, but there’s not much room for getting in my double line or industrial sidings. 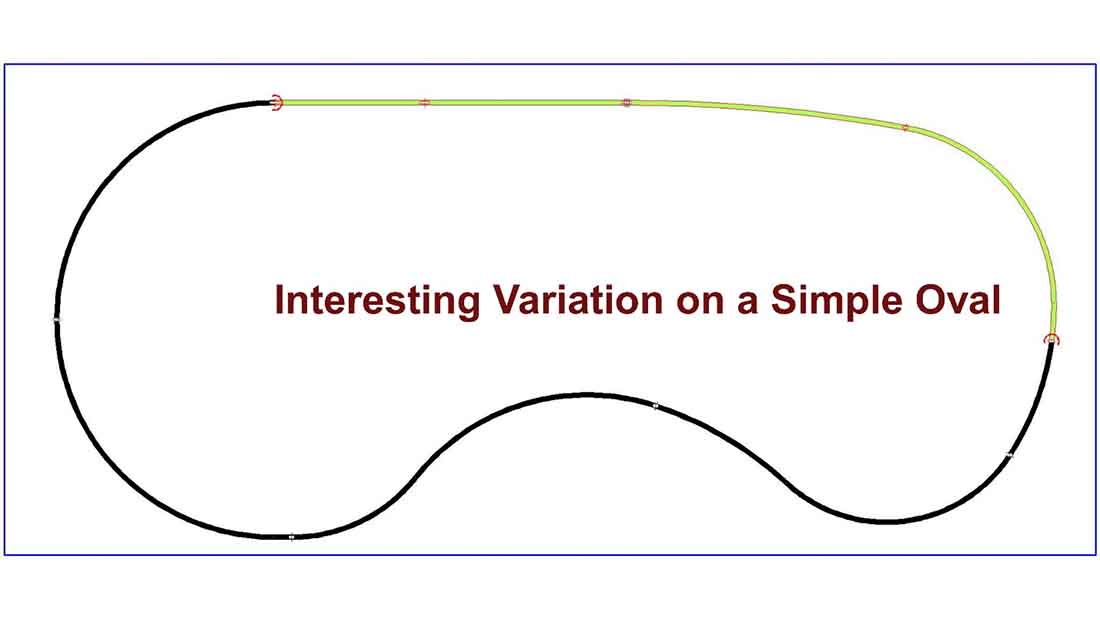 This is another design that I actually built in both G scale and N scale, an up and over layout. If you follow the black route around, you see that it has one main track that comes back on itself. 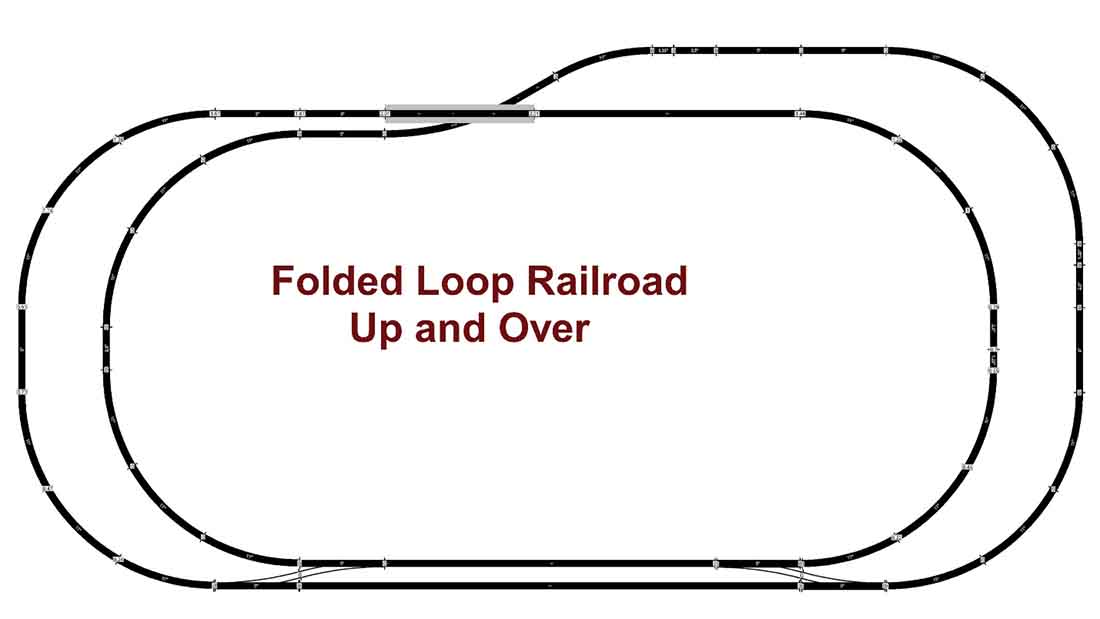 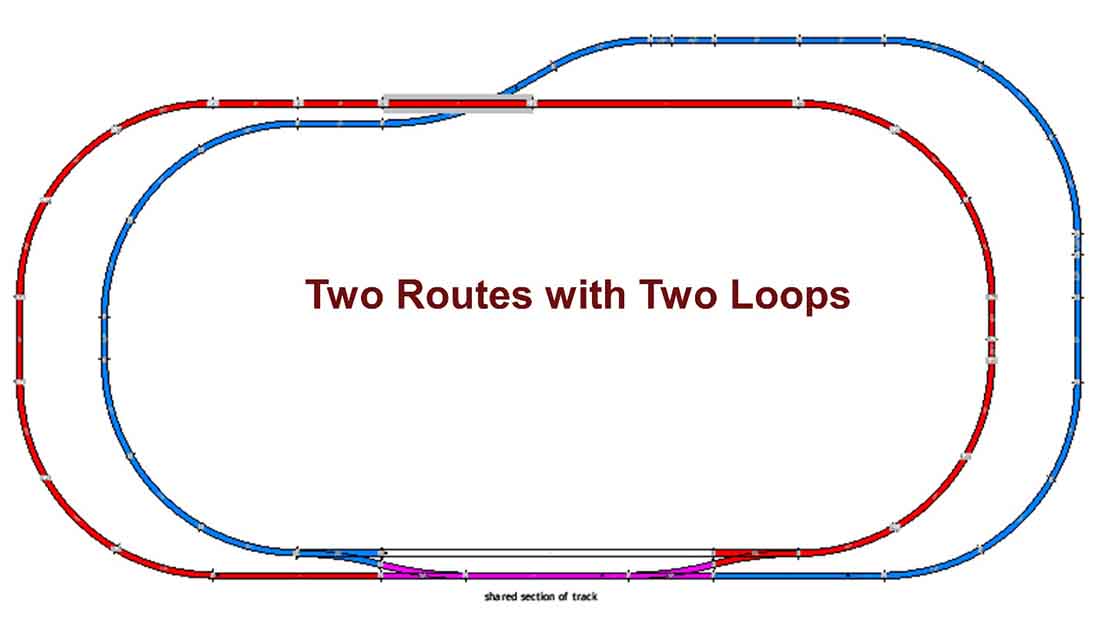 So back to the drawing board for my future layout. For this I started with two ovals.

In my final design shown below, each of the two loops can have a train running around continuously.

To the two main tracks I added some sidings, two stations (red), a mine (blue), an engine facility with an engine house (red), a classification yard, and several possible industrial locations (green and yellow).

Note that the long branch line to Romeo can be used by the yard engine to work the classification yard and industrial areas.

The yard engine can be working the yards and sidings, assembling and disassembling trains while the two trains on the mains keep running by themselves.

There is a complication for the local yard switcher that makes operations more interesting.

The local needs to dodge around the two main-line trains to work the industrial sidings at Fox Creek or the mine at Platoro. This siding at the lower right, representing the interchange to the D&RGW can be used as a fiddle track to add and remove cars.

In my plan, I have added two tunnels, a large mountain (dark gray) on the upper right, and lower hills (light gray). To help separate the two towns, I added a river (blue) and a central hill (gray).

To see more details on my planning process and final design, please see my youTube video at


Right now, I am calling this the Conejos Valley Railroad. The Conejos River valley exists in Southern Colorado, Platoro and Romeo are real towns, but Conejos is fictional.

In my mind the railroad connects with the Denver and Rio Grande Western in Alamosa and runs from Conejos, through Fox Creek, up the river to Platoro. FYI, conejos in Spanish means rabbits, and Platoro is a combination of plata (silver) and oro (gold).

I think my plan is more representative of what I call the “British” model. Great Britain has a much more extensive railroad system than in the U.S. with many more trains, both freight and passenger.

I think of the British layout as having 2 or more concentric circles of track (I’ve seen up to five loops) and lots of details–buildings, people, autos– completely filling the space.

In the U.S. we have far fewer passenger trains and long trains passing through varied landscapes. Except for the Atlantic coast, there are few passenger lines. For example, Amtrack serves only a few cities in my state with only two trains running per day.

Thus, U.S. model layouts tend to have a longer single main line, with more scenery between towns and few passenger trains. I think of the folded loop layout above as “American”.

Here’s an interesting, but unrelated, story that Al might want to pull. Thirty years or so ago, my wife and I were traveling around England and had spent a day in Windsor seeing the castle and town.

We had traveled down over the short stub line from Windsor to Slough and were waiting for a train back to London. After a bit, several police in flack jackets showed up on the platform across from us and directed everyone there to leave.

Suddenly a long black train with royal markings silently pulled into the station. “The Queen?” Unfortunately, no.

Several people (Royals?) got out of the train and were led up to waiting cars where they were whisked away, presumably to Windsor. Very exciting to us!

Now on to Hugh:

I think some of the American Flyer die cast Locos are nearly as detailed as mid 1930s Lionel. So for Kid Proof Christmas displays I have used a couple AF 420 shells with Marx motors. Some shells are broken and cheap but if they have all the trim the bodies can be fixed with products like JB Weld epoxy.

This red one is a mixture of many spare bits.

The tender is a Marx wedge with post war Lionel trucks.

The flat car is prewar Lionel with post war trucks and the PRR caboose is the last tin plate one that Lionel made in the late 1930s and continued into 1946.

The next to the last image is a modern era Lionel powered AF loco set up to pull a 1934 Lionel North Shore set. 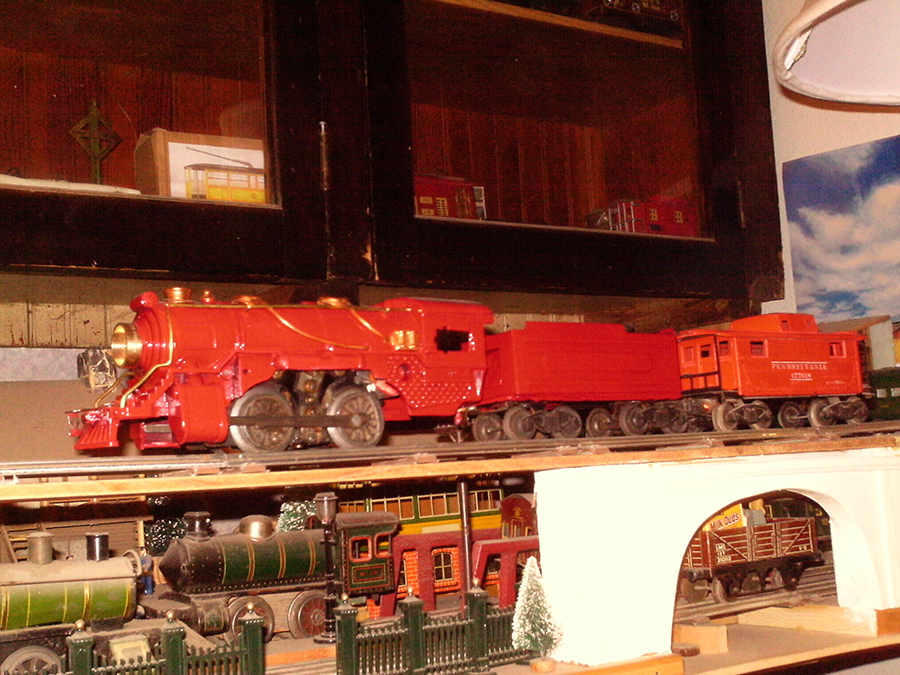 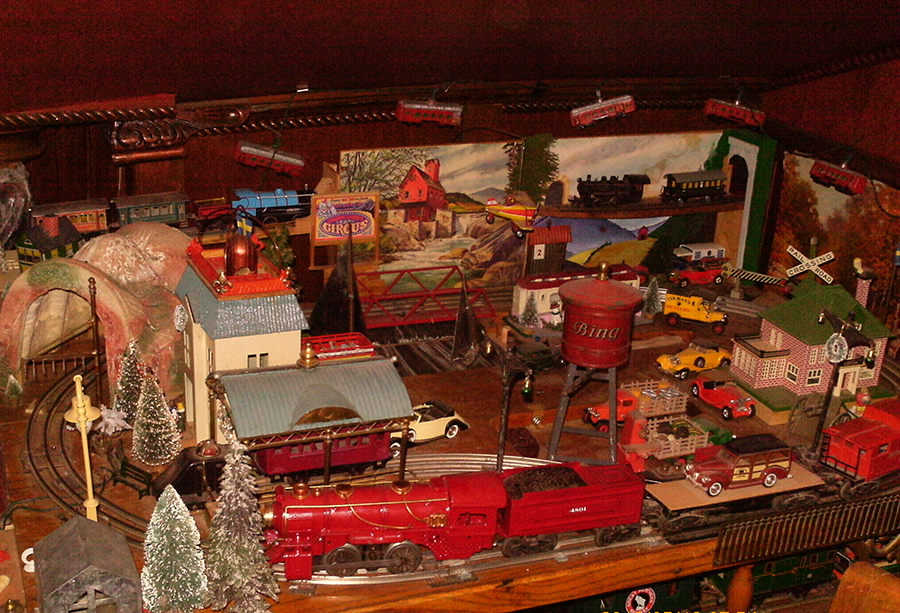 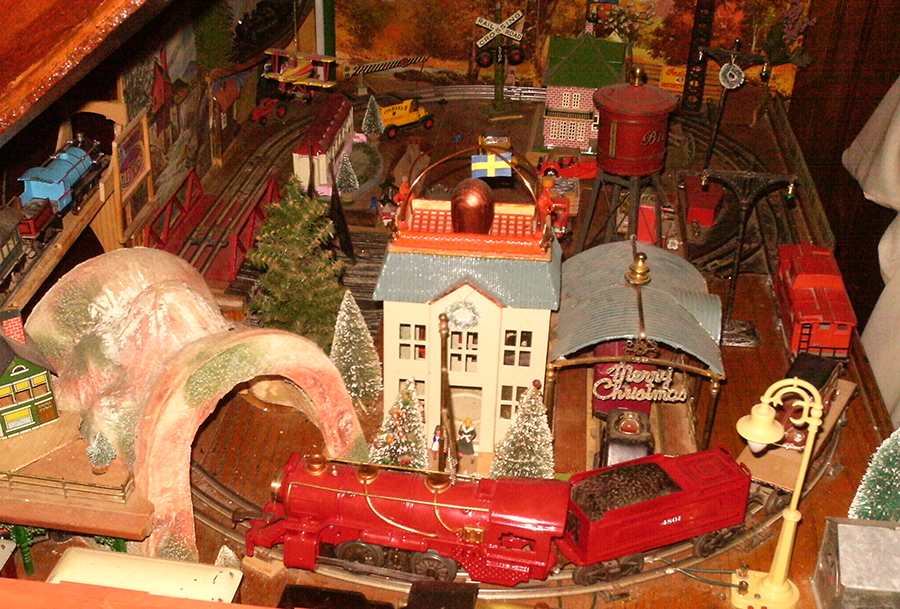 A big thanks to Dean for sharing his Atlas Track plans.

I also like the way Hugh ‘kid proofed’ his locos.