Here is my first contribution.

When we went to Savannah 2 years ago to visit my Father in Law; there was an advertisement in the hotel for an eatery “Barracuda Bobs”.

I decided that my town needed a restaurant more than a bootery, so off came the boot. I had trouble with the sign because to have it two sided the head would be 180 degrees out. Getting nowhere fast; I asked my son Eric about it. He said to send the file to him and he would take care of it. I got two pictures back a day later! The restaurant’s website has a picture of their bar which is beautiful. I copied it and printed it on “Modeler’s Inkjet Transparency” available from Evan Design.

Around sometime in 2010 we met our son Eric at a bookstore on Front St in Brooklyn. It’s almost directly under the Manhattan bridge (DUMBO). It’s Berl’s Poetry Book Store. It’s the only book store in NY that is totally poetry books. I expressed the thought that I would put the store on my layout. Berl had some post cards with a great picture of the sign. We moved in 2014 and the store never happened. I just recently got the urge again, but was running out of real estate. I decided to renovate Bob’s and put the book store on the second floor.

Using a Dremel tool I cut into the building wall and install a double door that I had removed from another project. If you’re like me your trash bin is pretty sparse. Then I salvaged pieces from a torn down pedestrian bridge and cut down the width of the staircase. I cut back the landing and only used 2 posts. Then I attached railings on the stairs and platform. A discarded piece of the platform was a good size for an awning over the door. I had previously created signs using the picture on the postcard and printed them on card stock.

I brushed on yellow glue and attached one to the wall. I used two more to create a double sided sign. I used a piece of poster board in the middle and used some scrap dowel to plug it into the front wall. I added lighting over the doorways and interior as well as hooded lamps to illuminate the signs. The diodes that I used over the doors and interior were a little bright. I don’t recall if I picked up the suggestion here or on another forum to use Tamiya x-26 clear orange to tone down the brightness and add a warm glow.

I topped off the project by adding the sandwich sign advertising poetry readings by my Son and Daughter in Law. My Wife’s comment was that no one will hear them with all the noise in the bar downstairs. 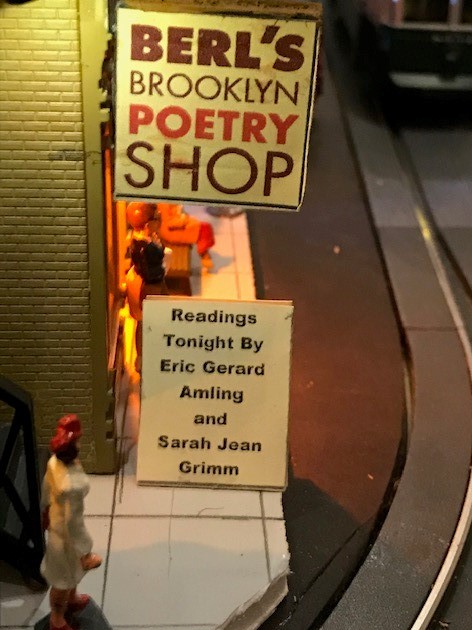 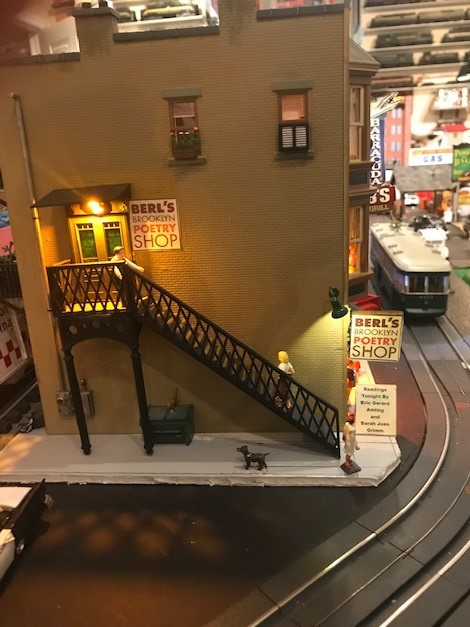 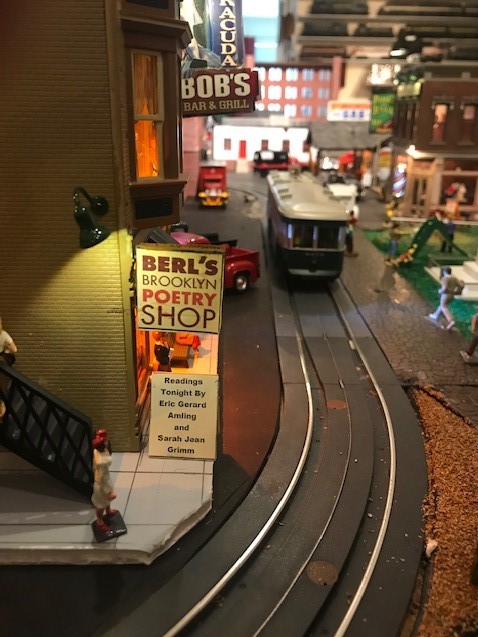 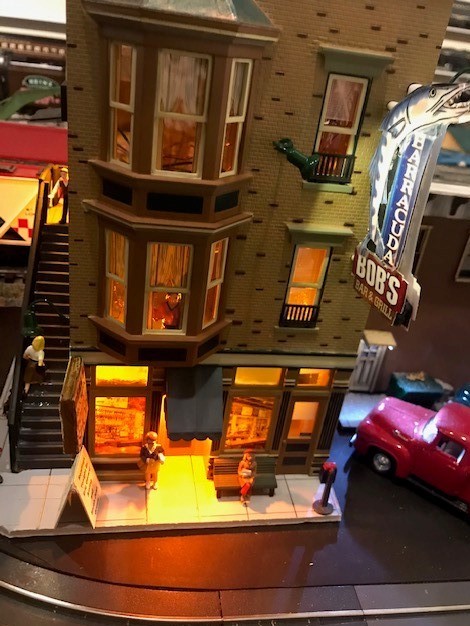 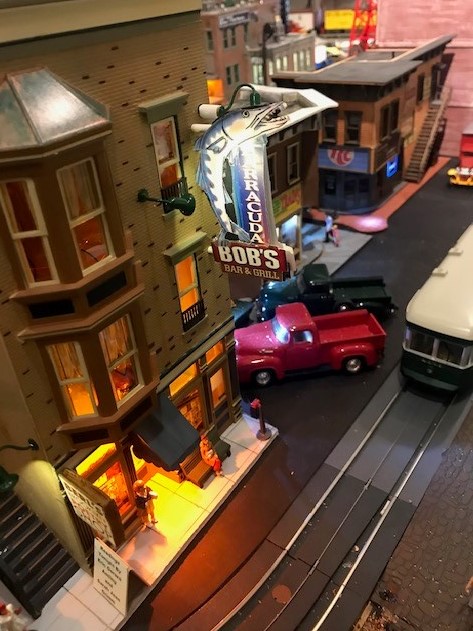 Now on to Jim – who will remember from his absolutely stunning layout, that sadly, he had to dismantle.

Jim’s sent me this upate on his new layout. I’m crossing my fingers that it is the first of many:

Thanks for the opportunity to share my layout. I did not expect such royal treatment. I am overwhelmed by the comments. So I will try and answer some questions.

The time it took to do the basic layout was about 2 years. The remaining 7 years were used to make the various scenes, buildings etc.

The sky (wall) was a blue grey, although it did not show up in the pictures, like an overcast day. I did not want the back ground and sky to detract but rather enhance the various scenes.

The rock work was made with a wall plastering material we have in Canada. It is called Durabond 90. The number stands for the length of time in minutes it takes to set up. It is a material use to patch malls. It is much softer than hydrocal.

The one drawback is, you have to put a primer on before painting, otherwise, it is very easy to carve, paint and work with.

The trestle was scratch built from a Hunterline kit plans.

Now, here is a modeling tip.

Instead of one sheet of 2” foam, I use two sheets of 1” foam, glued together with foam adhesive.

This allows me to go down in height and still have a flat base. You have to plan ahead a little as to where you want to cut out the first layer and not put too much adhesive between the two sheets of foam. 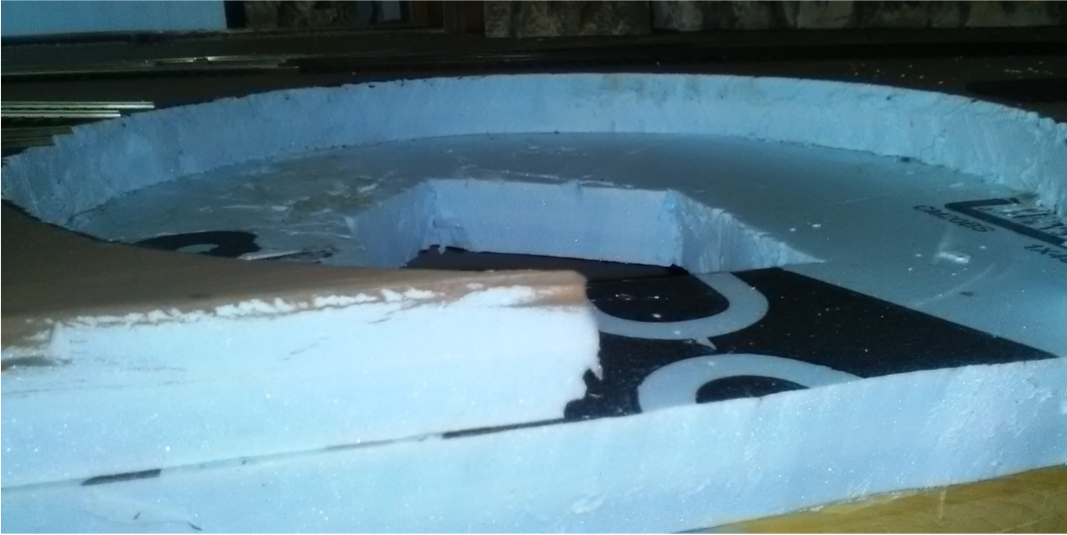 Al, thanks again for your site and hard work.

A big thanks to Jim and Bob.

Love what Bob has done – I have no idea why, what really makes a layout for me is a theme, or a connection to a place.

And if you want to get going on your very own layout, the Beginner’s Guide is here