I have been watching with interest your watery files. Here are some from my mine, the leaky creek.

The old mill pond was a broken piece of window glass. I used water paint to make the nuddy sides and blue wash watered down in the center. Then I spray painted varathane over the glass on both sides. The glass sits on a hole made with plaser of paris and that was painted to make the pond bottom. Other scenery was added. Sorry about the plywood bridge, these was a plastic one there but the cat sat on it and wrecked it.

The other little lake was made from a piece of 5/8 plexiglass. It was scraped and varithane added and I used a sponge to roughen up the finish. A pale blue wash was painted on the bottom and unger the fake water is a gap of about an inch where plywood sits underneath painted as well.

I hope this gives some people some ideas. 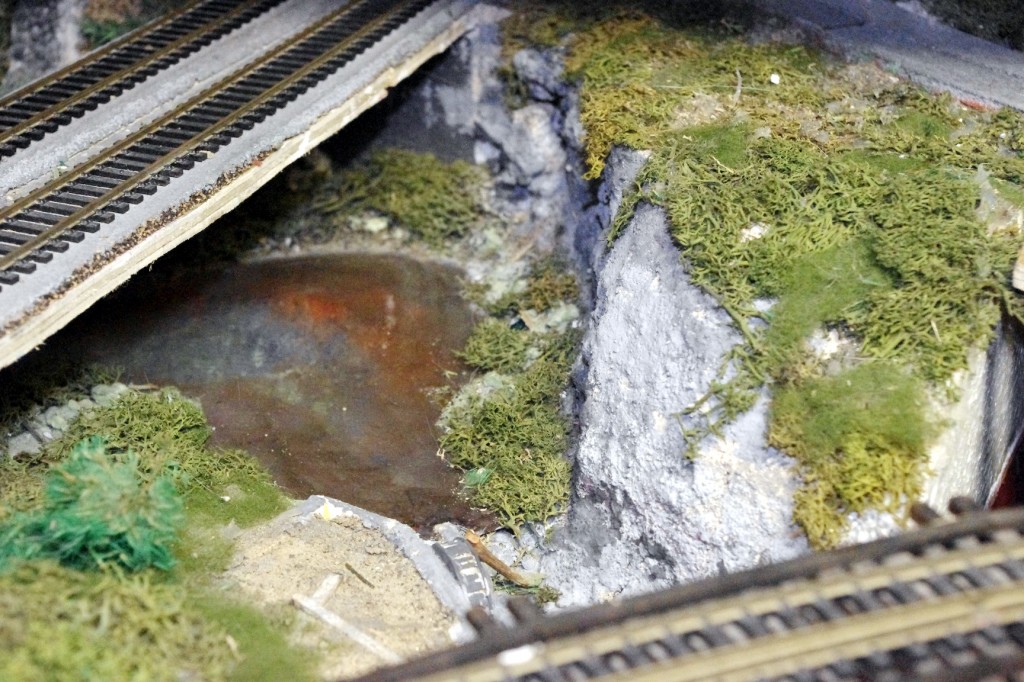 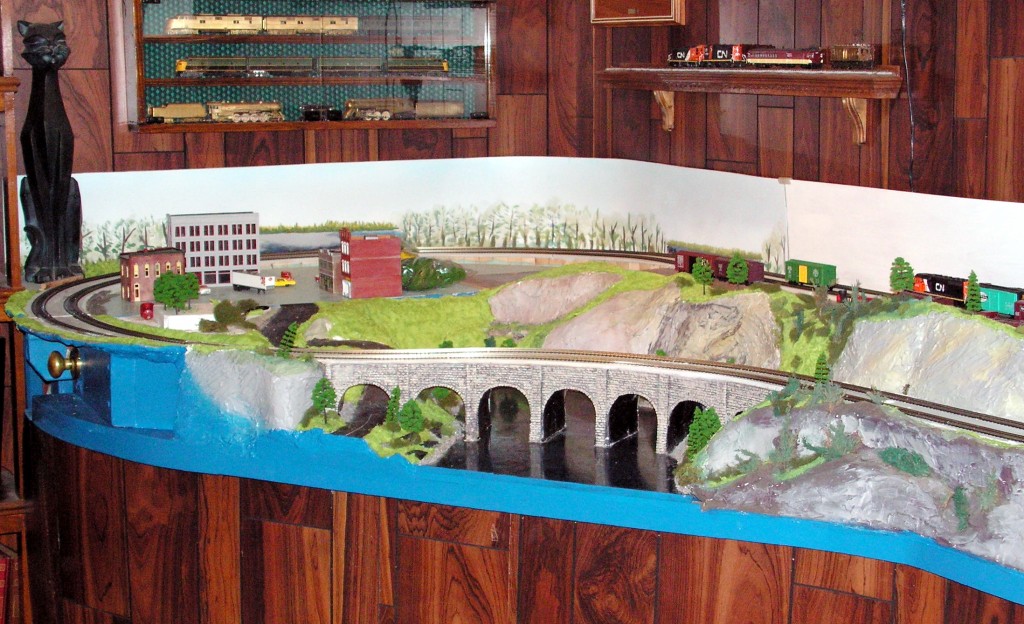 And now for something completely different, sent in by Chris.

I rather enjoyed it, so hope you will too. It’s an extract from a piece by an author by the name of Richard Ford.

“My first job that mattered was on the Missouri Pacific Railroad, in 1963. I hired out — railroad lingo — as a locomotive fireman, working the switchyards in Little Rock, Ark. I was 19, and knew almost nothing about anything — certainly not about real work, and not about how work almost always affiliates you significantly with the lives of others.

Why anybody would give me, an untried incompetent, such a serious and serious-sounding job invokes the long, devious story of America’s modern railroad past: the epic shift from steam to diesel, the decline of passenger service and the ascendance of freight, the bullying exertion of postwar union muscle upon a vital industry nearing free fall. These were the large, indistinct forces, far beneath the Cyclopean notice of which the puny likes of me scuttled about, getting along — often absurdly.

Switch engines are specially made diesel locomotives used for putting together freight and passenger trains. In my day, a train arrived at the Little Rock switchyards, and its boxcars and passenger cars were sorted out by such an engine and its three-man crew, to make new trains that traveled on to Dallas or Memphis. The head of the switch crew ran this operation from the ground, sending signals by hand or (at night) by battery-operated lantern to the engineer. Work went on around the clock. A shift lasted eight hours.

Being a locomotive fireman on a diesel switch engine was a learn-as-you-go, workplace fiction, schemed out by the railroad higher-ups and their union adversaries (or accomplices, depending on your view). When diesel supplanted steam — a paradigm change that went on through the ’50s — firemen became slowly expendable. Diesel engines don’t need stoking or steam — and neither did they need those doughty fellows who for more than a century had stoked the fireboxes that made the steam the old engines ran on.

But these unappreciated firemen also happened to be the apprentice corps from which engineers were drawn. And engineers were not expendable. So to keep the engineer supply replenished and to avoid big layoffs and strikes, the firemen, minus their strenuous stoking duties, were simply kept on by a union-and-management détente until such time as the firemen could all be absorbed.

And, indeed, they were much more than “kept on.” For some reason — possibly a buried contractual clause nobody had the strength to fight over — firemen went on being hired, which was how I came into the picture, skill-less but game. This employment fiction was known as featherbedding, because its critics imagined the firemen not to be really working, but living a life of luxury at the public’s expense.

For me, acting the part of a fireman on a hugely mysterious, thrumming railroad engine turned out — surprisingly — not to be very complicated. Real firemen, of course, knew everything. In training to become engineers, they were expected to know how to dismantle, reassemble, repair, maintain, diagnose and verbally explain to a 4-year-old child how a steam engine worked, and, in the new post-steam era, how a diesel worked, too. Rigorous study and considerable practical gnosis were involved in acquiring such competence. Examinations were taken, certifications attained, experienced logged, commitment demonstrated.

Typically, a fireman — sitting over by the left-side window, across from the engineer — was permitted to “run the engine,” though only when the engineer saw fit. This was an old-fashioned system of apprenticeship, informal in its protocols but ironclad in its observances. Advancement was never swift.

Firemen also performed other duties. They checked many things at the start of each shift: the engine oil, the brakes, the couplings, the trucks, the primitive, axle-lubricating receptacles called journal boxes — which were susceptible to fires. Firemen also kept crucial watch once the shift started. Out the left-side window, they kept keen surveillance over whatever happened where only they could see — on curves, at crossings and trestles. They were expected to be acute to whatever activity came into view: errant citizens, their wayward vehicles and animals, switchmen on the ground, approaching trains or other rails full of boxcars. The job was clearly easier than it had once been, but it was not inconsiderable.


For me, it was different. I was a summer hire, and would likely be gone by fall — off to college or to the Marines. I could stay if I wanted, but everyone knew that firemen wouldn’t be around much longer. And so, for both reasons, no one took the time to teach me much. Once I was hired, my name was simply placed on a list of firemen available to fill shifts when a regular man wasn’t available, owing to illness or other official absence. The crew-caller, a man with a horsehide voice, would phone me where I was living with my grandparents, two hours before the shift started, and growl, “Ford? Twelve-to-8. The Logan Street yard.” Click.

You needed to pay attention because there was no number to call back. This job status was called “working the fireman’s extra board.” And if you didn’t screw up, they’d call you every 24-hour period — though you never knew exactly when. If you did screw up, or if you declined a call (because it was midnight and you were “sick” or drunk or just not there), you would land on the crew-caller’s bad side and he wouldn’t call you again. You were fired — they just didn’t tell you. You were paid for your hours, $3 per. It was good money then. I needed it. So I was always there, attentive.

The first switch engine I ever climbed up on was the first one on which I was the fireman. It was 11 p.m.; a vast-seeming, pulsating switchyard; a hot, steamy Arkansas night. The engineer, a large, gentle, countrified man in his 60s, walked me around the heaving locomotive, pointing out gauges on which were calibrations I needed to check, an oil dipstick I needed to consult and the journal boxes I’d want to look at before the shift commenced. He then took me up the metal-rung ladder into the dark, roomy cab where the controls were on the right and my bench was on the left, by the window.

Taking his seat, filling his cheek with Red Man, he looked across at me. (I was full of wonder, full of thrill, full of tingling fear that didn’t feel like fear.) And he said, “Ford, you just watch out your window and be sure we don’t hit anything, and we’ll be fine. Is that O.K. with you?”

“Yes, sir,” I said, glancing out the window, across the sodium lights of the switchyard, near midnight. “Yes, sir. It’s O.K.” That was basically my training. I was a fireman.

A real job, a job that matters, is one that a person with responsibilities would hold — an adult. It involves a living wage, decent benefits, possibly some union backup, and complex duties that if performed shoddily would mean trouble for others: injuries, inquiries, costly equipment being damaged, people losing their livelihoods. Duties with consequence — not sacking groceries or mowing lawns.

And yet being a fireman wasn’t quite that for me. Oh, I showed up every day — mostly every night, because the crew-callers made sure that the new hires caught the graveyard shift. I collected my good pay. I bought a lantern as required. My grandfather gave me his railroad watch. I sat on the engines and kept watch out my window. I checked things. I gradually learned the railroad nomenclature specific to firemen: “Red block!” You had to shout that out over the engine rumble, in case the engineer didn’t see the red light up ahead that meant “stop.” Green blocks we didn’t sound out.

I missed no calls. Occasionally, I was transferred to other switchyard jobs in towns down the line — Texarkana, El Dorado, Poplar Bluff — even Hope. I lived alone, a working man’s life, or a boy’s. I stayed in rooming houses, killed time, ate poorly, often deadheaded in empty cabooses, far past midnight, back to Little Rock to see my girlfriend.

As the time went by, I learned that the “old head” engineers, who preferred the night shifts, often had difficulties — drinking or worse — to hide. More than once, long into a night, an elderly engineer would turn to me, give a good yawn and say: “Ford. Why don’t you come over and run this damn thing? I need a little shut-eye.” And I did that.

I’d been watching intently how it was all done — how you stopped the engine and how you got it going. What the signals meant. Where to watch. Running a big diesel in the middle of the night, with three switchmen on the ground, and shunting a hundred boxcars out of one rail into another, as well as all manner of other switching maneuvers, each communication performed soundlessly, using hand signals or lanterns, between myself and figures I mostly couldn’t see — all of that didn’t seem very hard. The brakes, the throttle, the gauges, the sand lever for the wheels, the horn. A 19-year-old boy could do these things. They let me do them. Why no one was hurt or maimed or killed by me, I’ll never know. I was lucky. So were they. It’s hard to understand today.”

Got something rather special for you next time.

54 Responses to Bob’s layout with water