Brian’s harbor kit bash ‘how to’

“When the Builders in Scale kit was released many years ago, I purchased it with the intent to add a harbour to my layout someday.

The kit unfortunately was “lost” in one of our moves to other cities but before it was “lost” I was able to make photocopies of the plans which I kept in a mailing tube. These are the ones that I use to make the buildings for my current project. 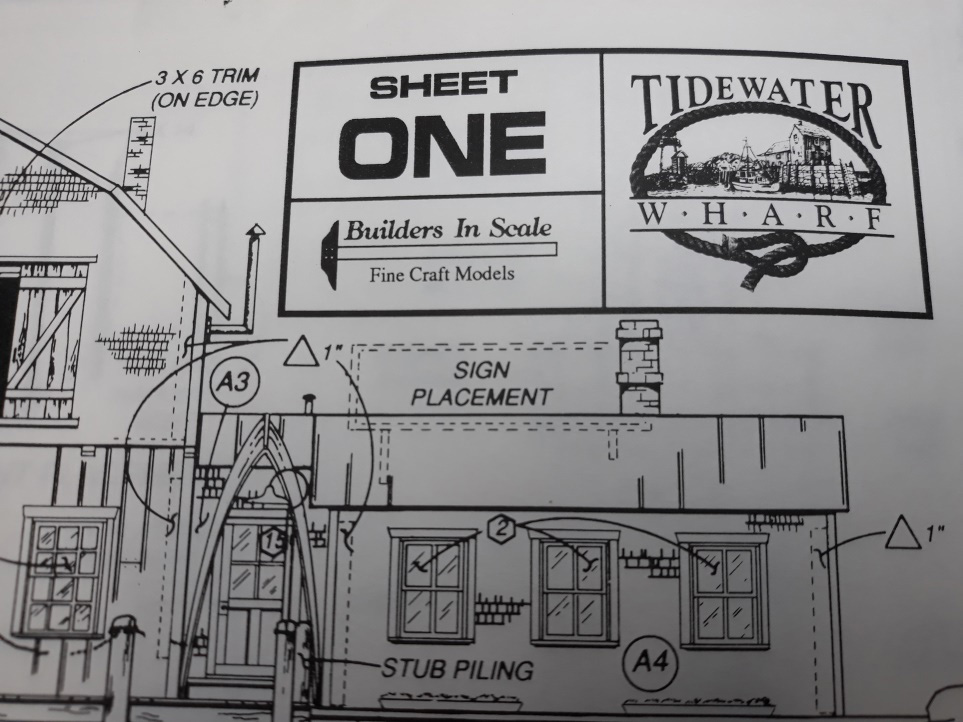 These three buildings (card stock mock-ups) are what I am going to use in the harbour area. First one is a shortened version for the Ship Chandler building, second one will be a sail maker and the third will be a small restaurant. 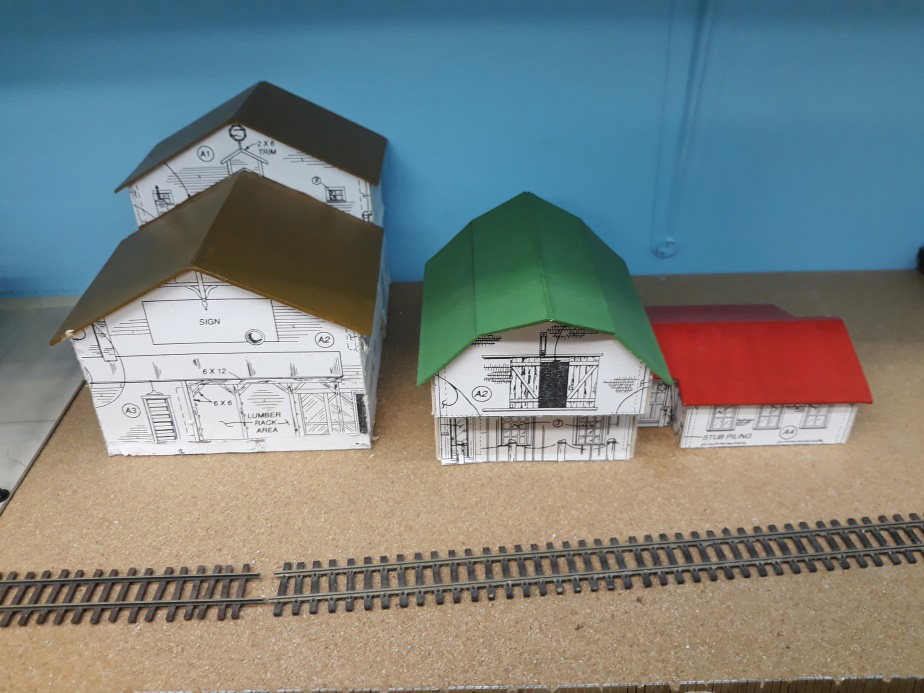 I used the photocopies as templates to make sure that the size and shapes are correct before transferring to the wood. 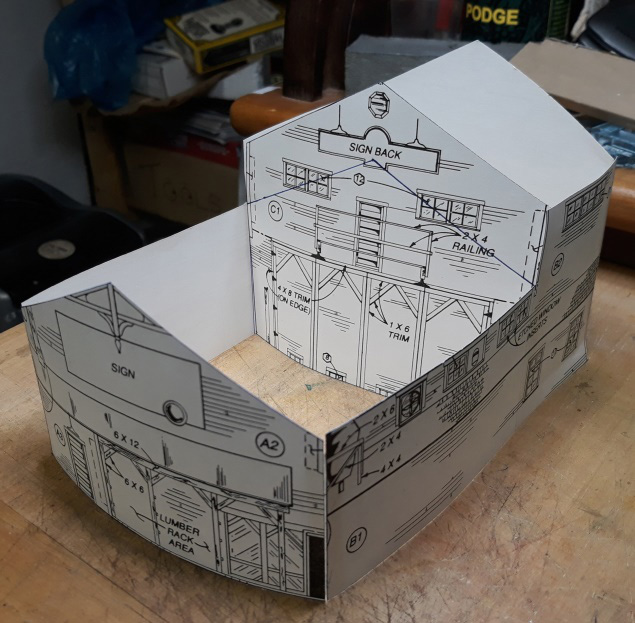 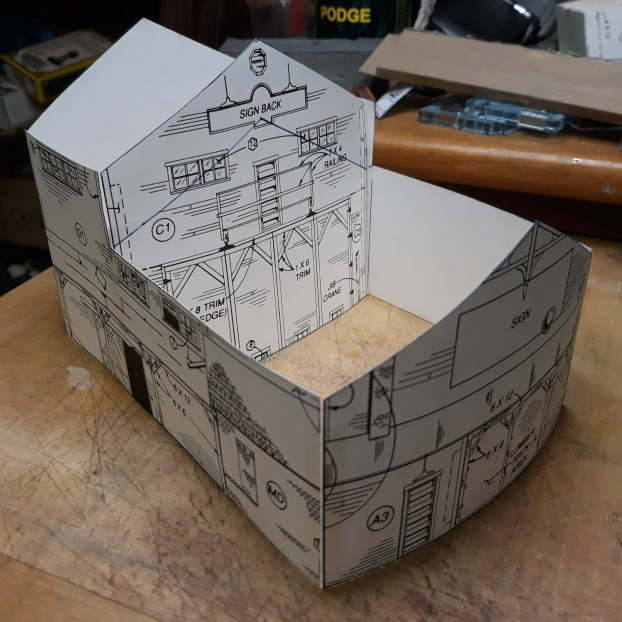 From the above, they were transferred to Board and Batten siding. I only used the wood on three sides of the building and because the back of it is up against the backdrop (wall) I used card stock for this back wall of the building. It cannot be seen from any angle on the layout.

This is where my magnetic corner right clamps came in handy to hold the building square along the bottom edge of it and an elastic band held the top in place. 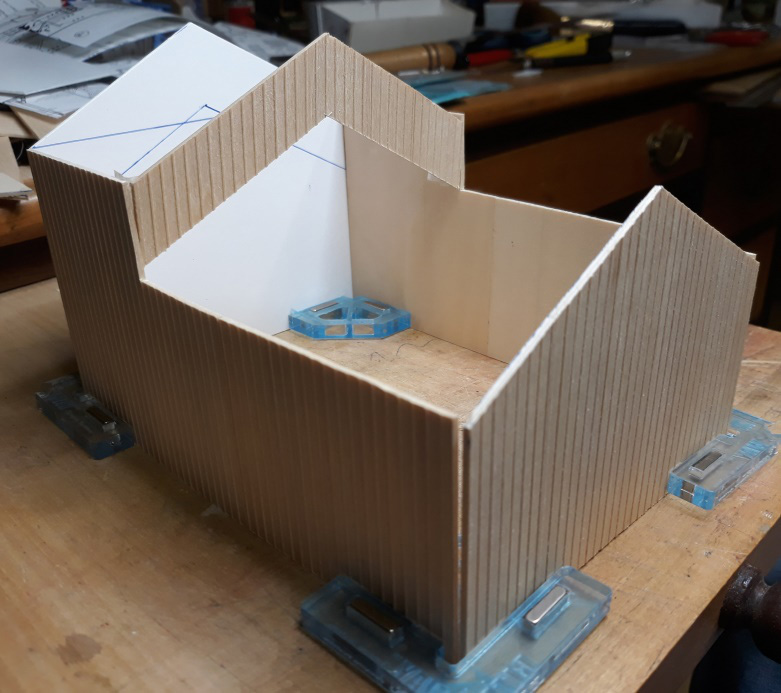 I added a wood foundation to the bottom to bring the building up to the right height for the loading dock surrounding it on three sides. 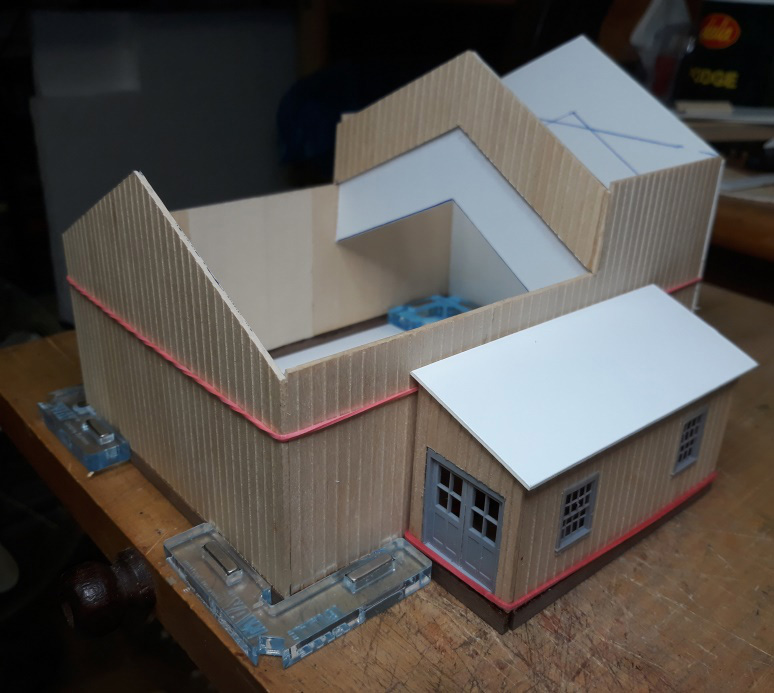 The windows and doors (from my bits box – left overs from previous kits) were cut out and inserted in the appropriate places. The roofs were cut from cardstock and will be covered with different materials. 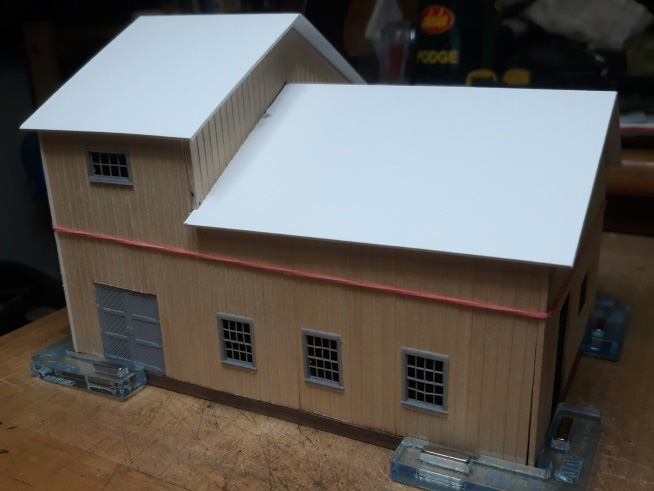 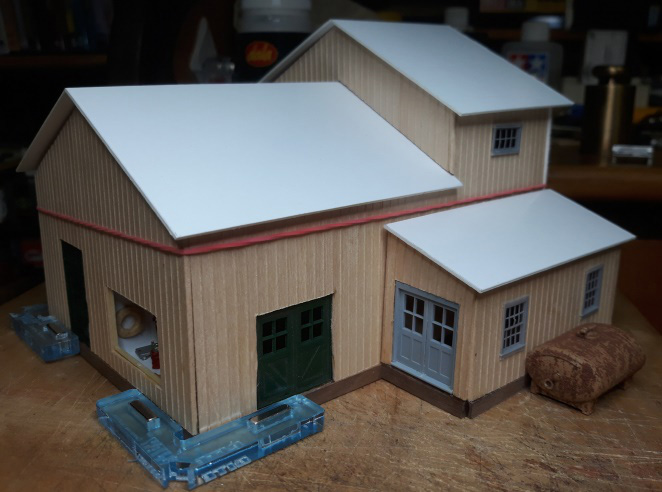 A window box was made from card stock to fit inside the front of the building to display the products sold in these premises. The name of the owner is derived from my wife’s initials. 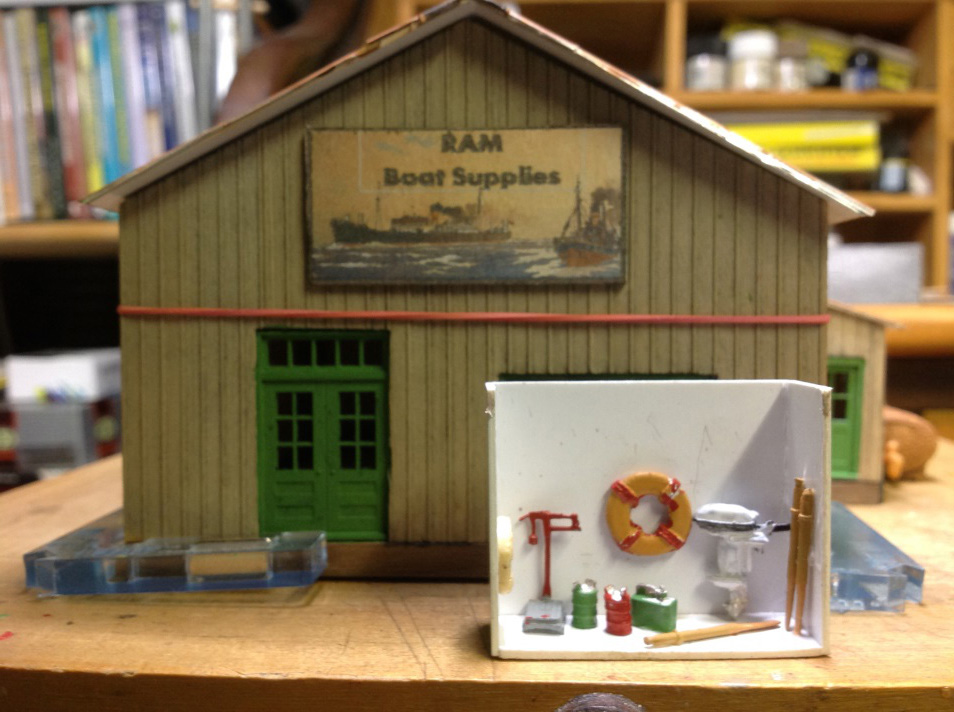 It was then glued in position behind the window frame of the building with clear acetate between the frame and the display box. 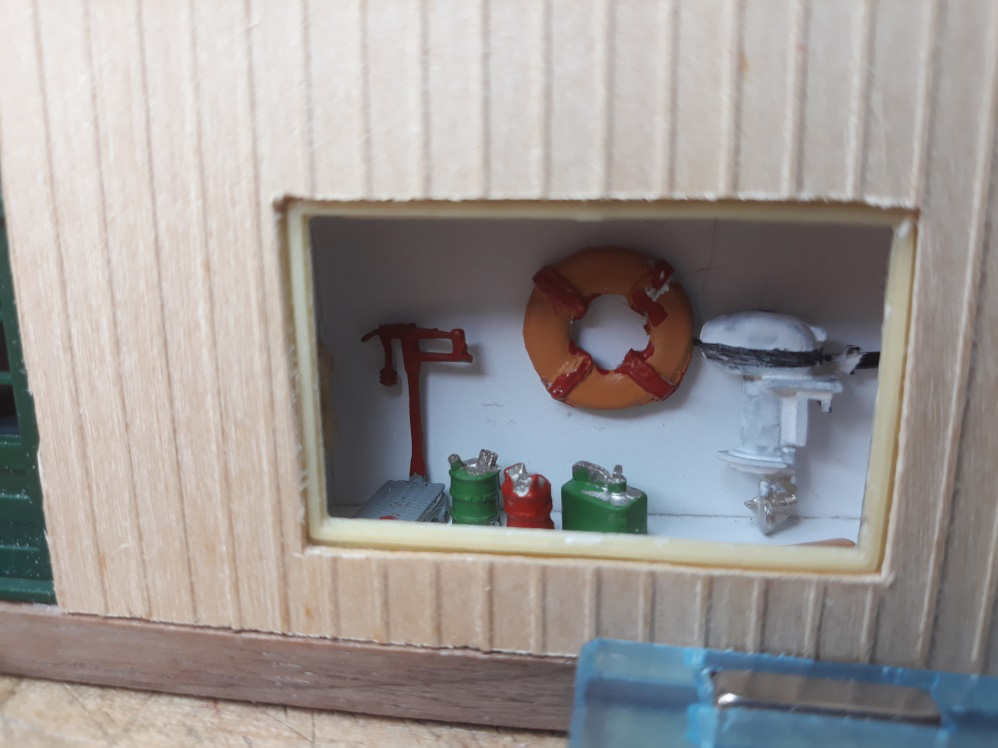 The upper roof was covered with IBR sheets from Builders in Scale cut to 8ft X 4ft scale and stuck down with double sided tape. The double sided tape works exceptionally well for sticking down metal to card stock material. 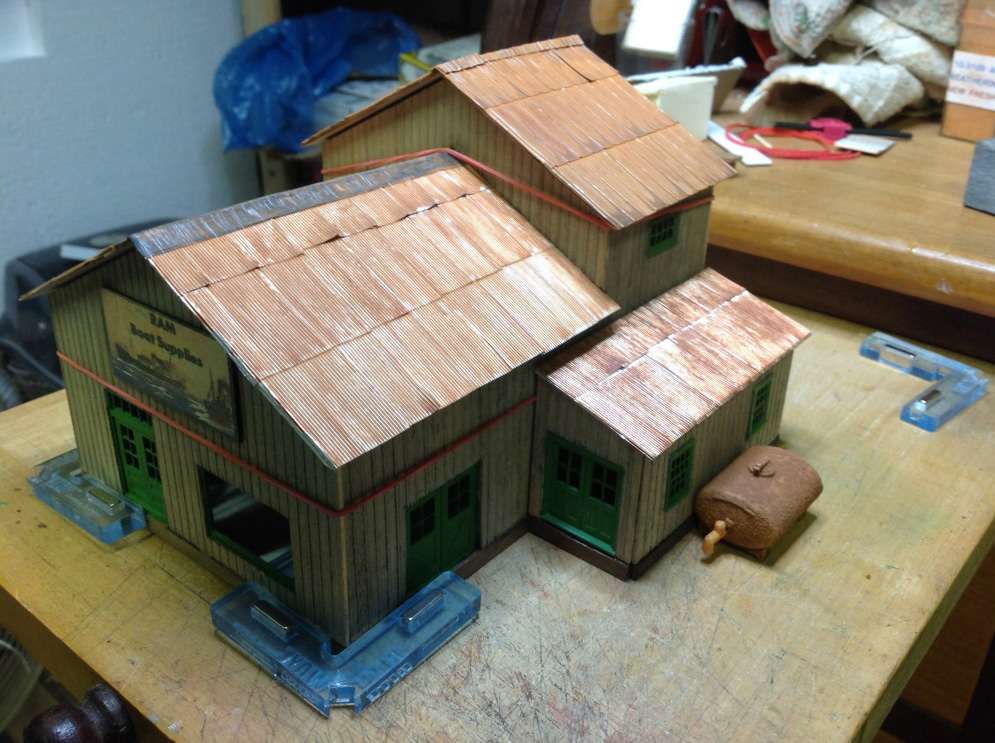 The two lower roofs were covered with Campbell Scale corrugated iron sheets also cut to scale 8ft X 4ft size. These were also stuck down onto the double sided tape on the cardstock.

All the roofs were painted with an acrylic rust colour and once dry, were coated with a rust coloured powder. This powder is self-adhesive and will not rub off with handling. 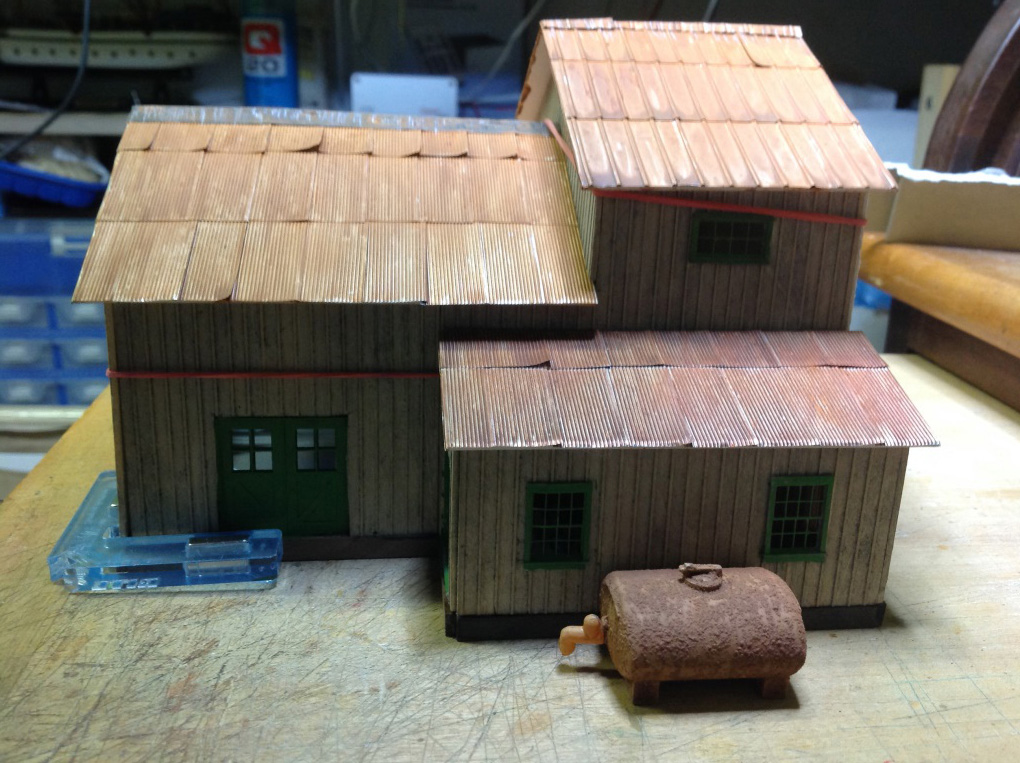 Next I added the three loading docks around the three sides of the building, stressed them and then weathered them before adding the details. 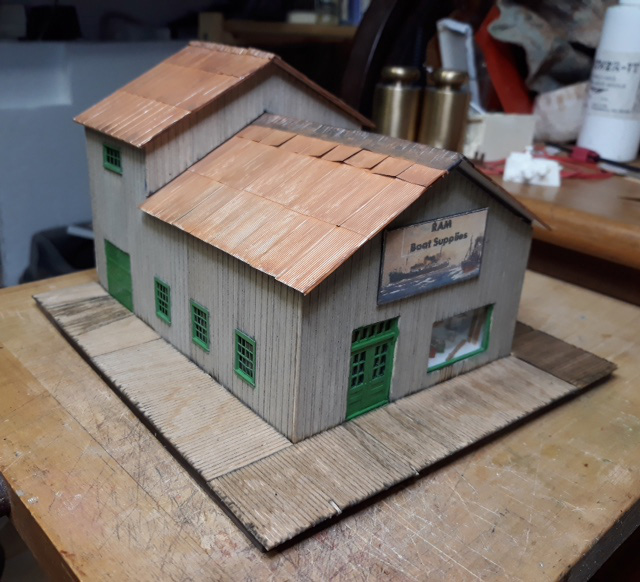 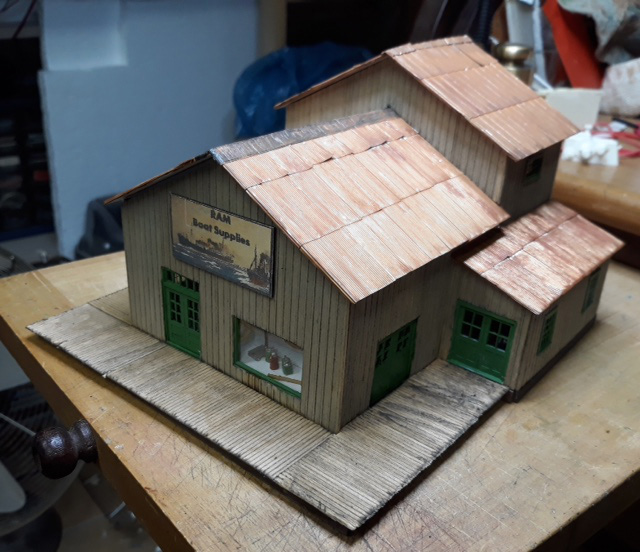 Again I added detail from my bits box to make the building look busy. Figures and dogs were added to give the human element, two old guys taking their dogs for a walk decided to do a bit of window shopping. 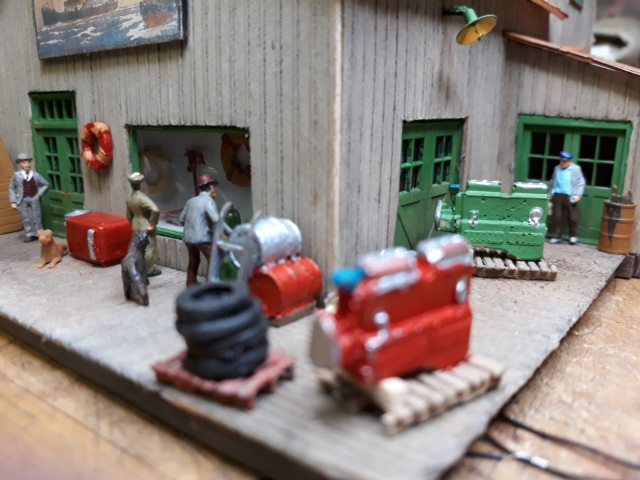 Here the workers are knocking off and heading to the bar next door at Red Hook Wharf for a pint or two with their mates. 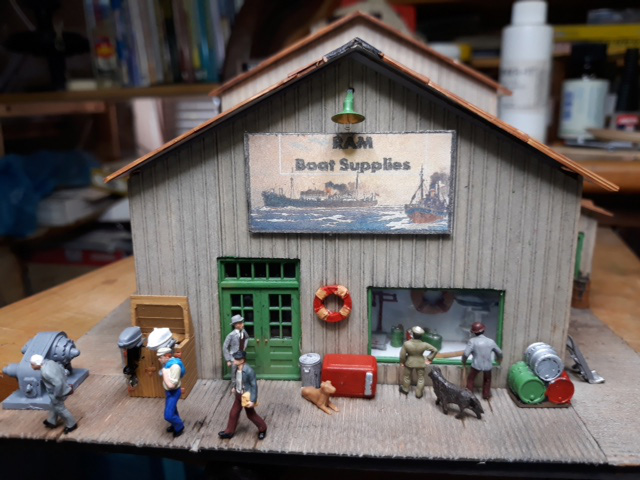 The poor guy at the door has to get all the stock inside the building before he can knock off and join his mates for a pint. 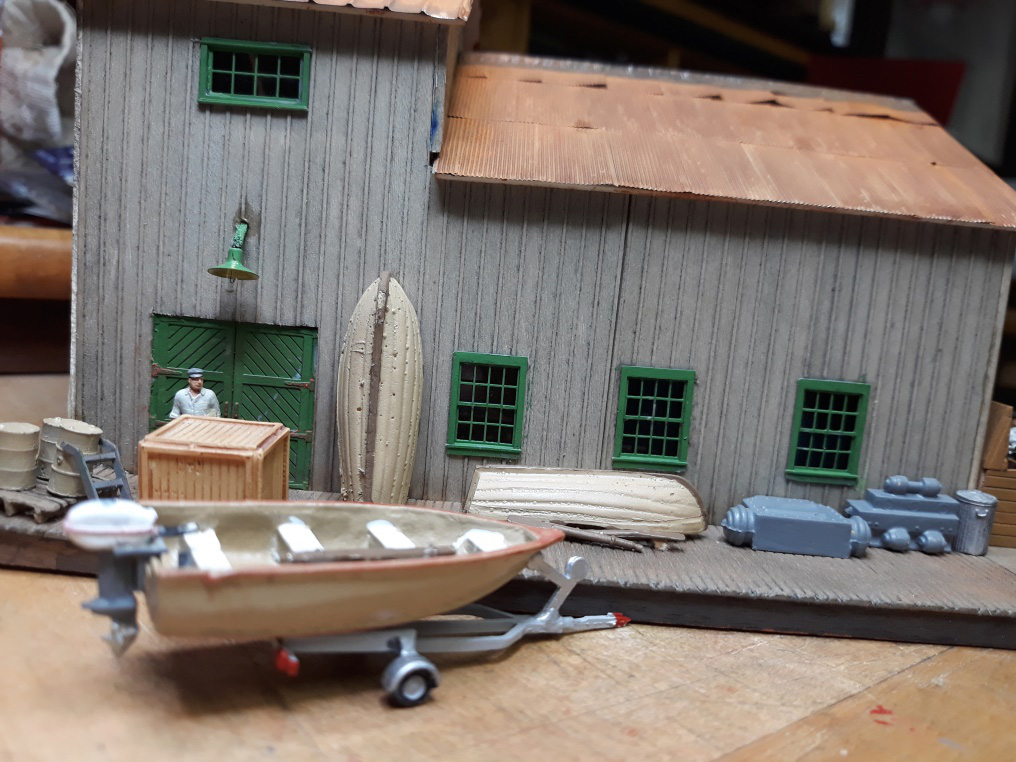 The Ship Chandler is all lit up for the night. I had put lights on the outside of the building for a change as there is no detail inside other than a light above the inside of the display window. The building is set back on the layout therefor the interior cannot be easily seen.

Woody’s boat rental is still open as old man Woody is waiting for the last rental to return, hopefully with a large catch of fish. 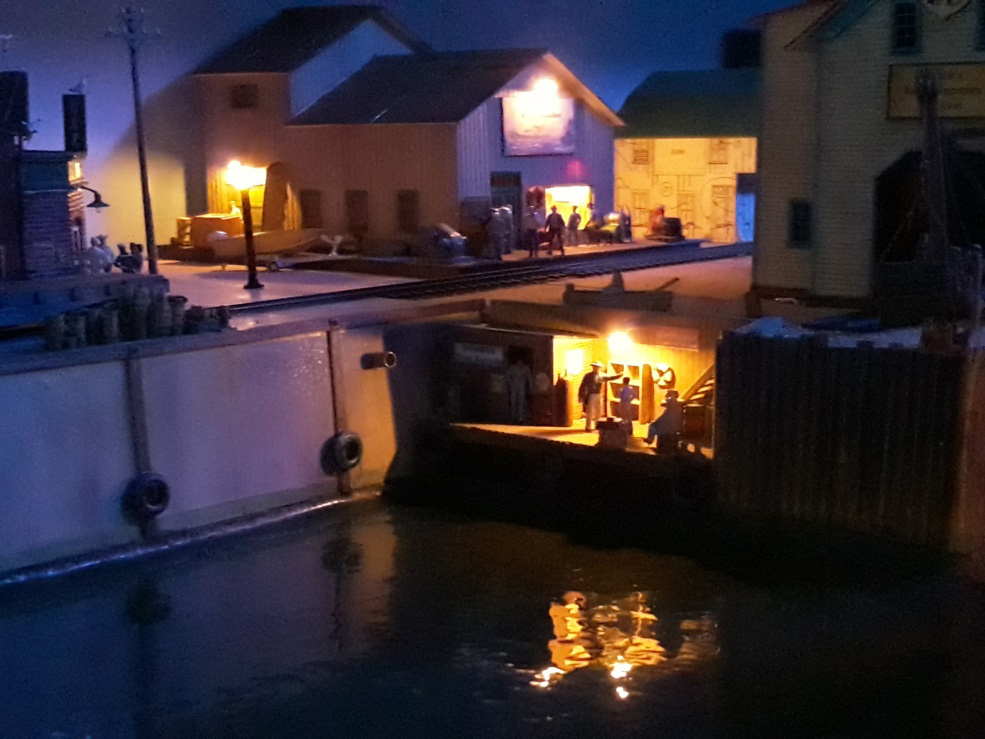 A close up view of the Ship Chandler building from the harbour masters office across the harbour. 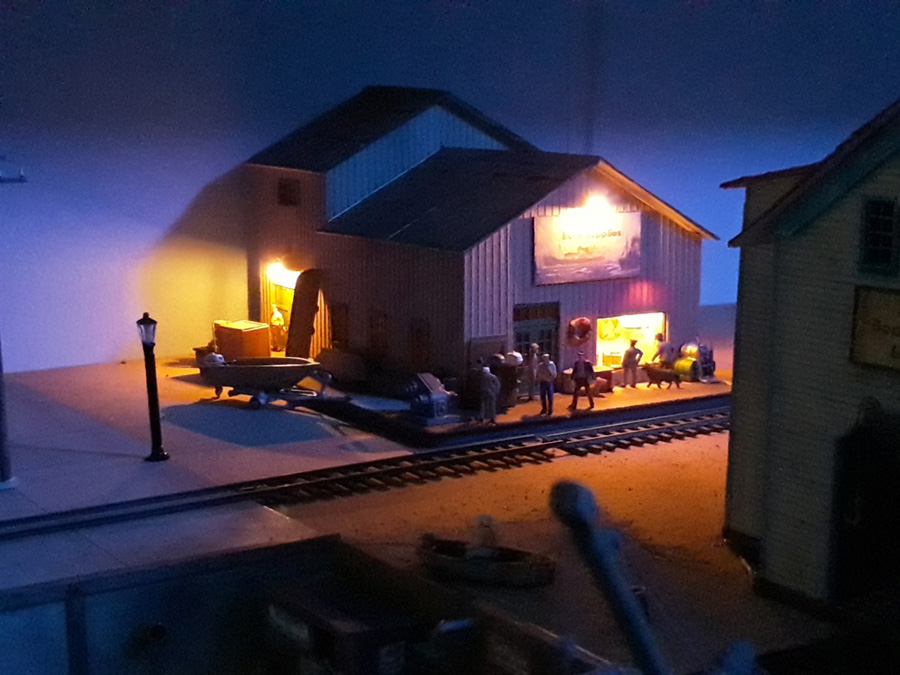 Another view on the other side taken from the boat repair yard looking at the workers knocking off. 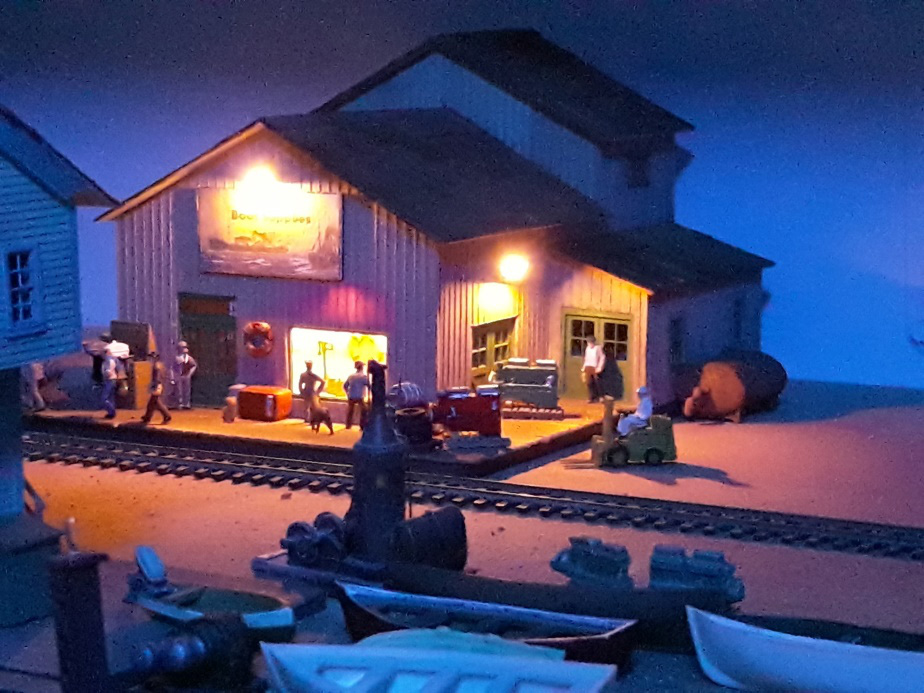 That’s all for now. The builders will be back on site tomorrow to make a start on the sail maker building. 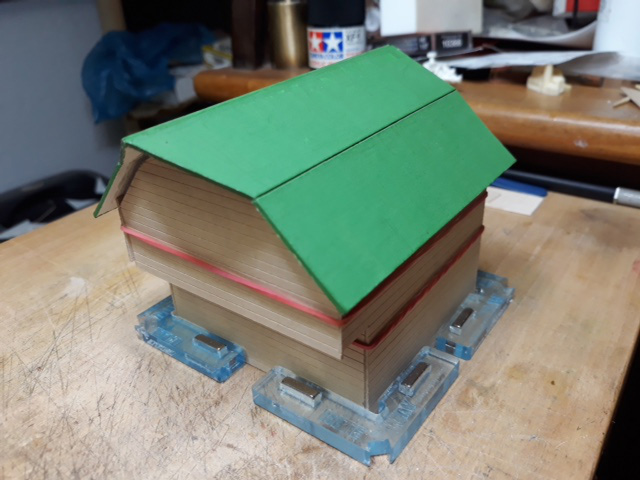 When I refer to my “bits box”, I actually have two. One is all the leftover bits and pieces from kits that I have built in the past which I have either been kit bashed, modified or made smaller or larger and the left over pieces put in it.

The other is where I keep all my casting collection and when I feel like doing a small project, I look for a few castings to paint and weather to be ready for a future project.

A huge thanks to Brian – it’s wonderful to see how he creates his scenery. You can seem more or Brian’s stuff in the Hall of Fame.

And don’t forget the Beginner’s Guide is here, you’d like to make that start on your very own layout.

26 Responses to Brian’s harbor kit bash ‘how to’