Here’s how I started my new layout.

I put this together starting in May 2016, of my “layout” to present time.

This is where it all started in May 2016 in a standard car garage of 20ft x 10ft. I had to put in a drywall 6ft in from the garage door for a storeroom accessed from the front. This left an area of 14ft x 10ft for my layout. Train room is accessed from a door in the right hand side back in the first photo. Curtains were replaced with horizontal blinds. At the window will be my work desk with a view out to the Knysna lagoon. Not sure how much work will get done with a view like that. 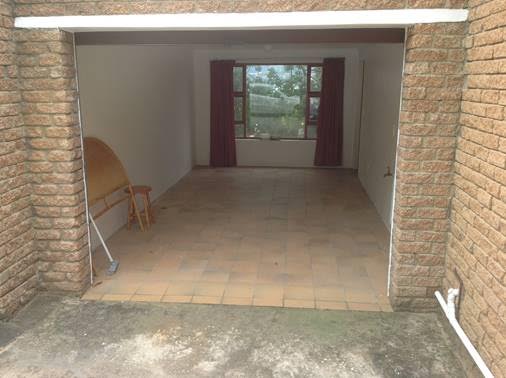 First photo is the garage from the entrance. 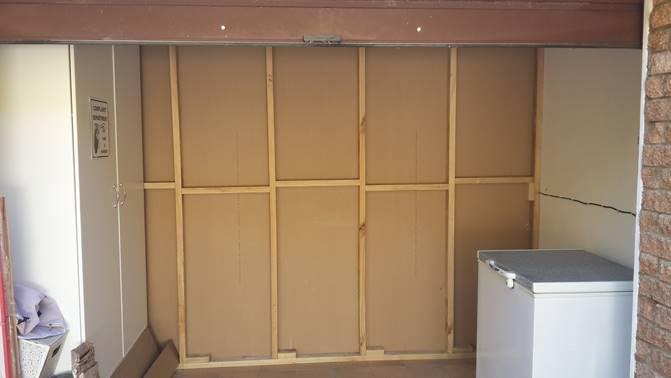 Second photo shows the drywall. Needs a rhino board covering on this side. 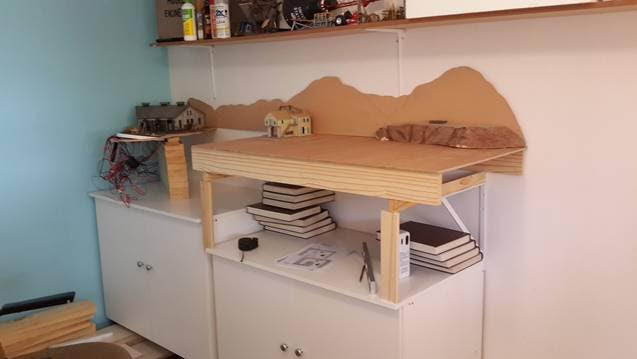 Next was to figure out a workable height of the lower level from the floor, now 47 inches. (made my previous layout too low and was not happy with it at 40 inches) The upper level is now at 62 inches which is just below my eye level. My eye level is at 67 inches. 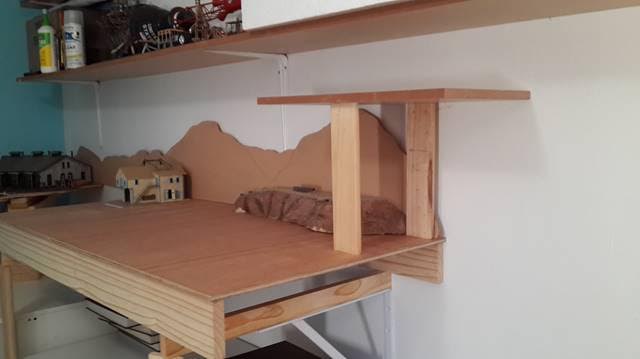 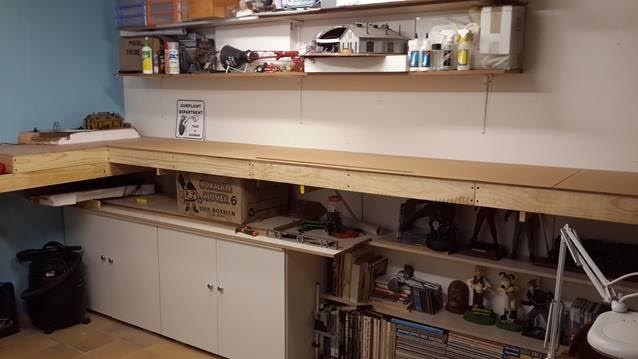 In the photos below, I had to make sure that there was enough packing space as well as book shelves under the layout for other “model stuff”. I put the top shelf in before the start. (The highest one) 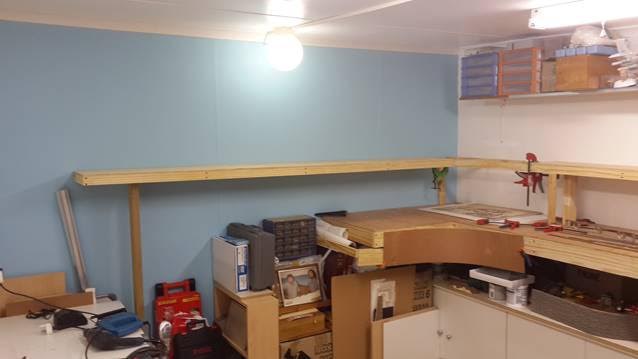 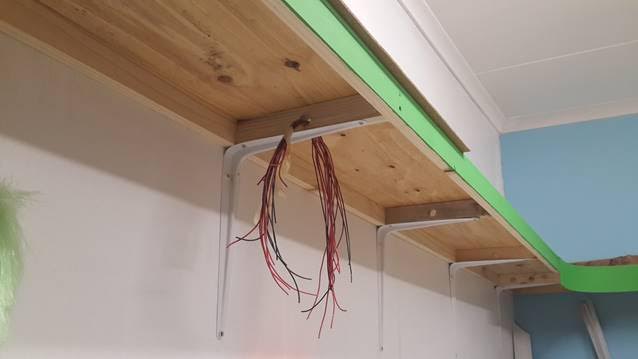 Once the shelves were fixed in place, I drilled holes in the cross braces for the buss wires. At this stage I felt that I had to put the facia boards on to get a feel of how the layout would look. The blue light at the top back is for night time operation when the main lights are switched off. 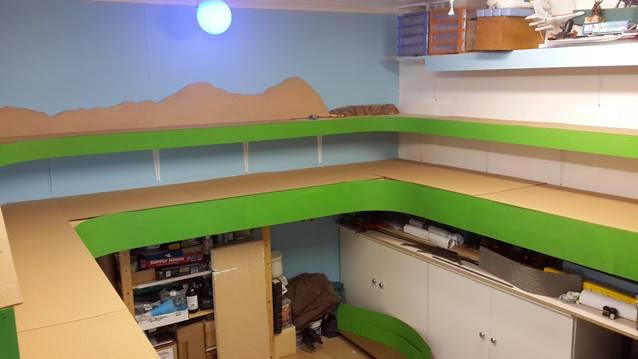 A panoramic photo of the layout prior to putting strip lights under and behind the facia boards. In the photo below, my Red Hook Warf kits will be placed in the new bigger harbour area on the lower left level. 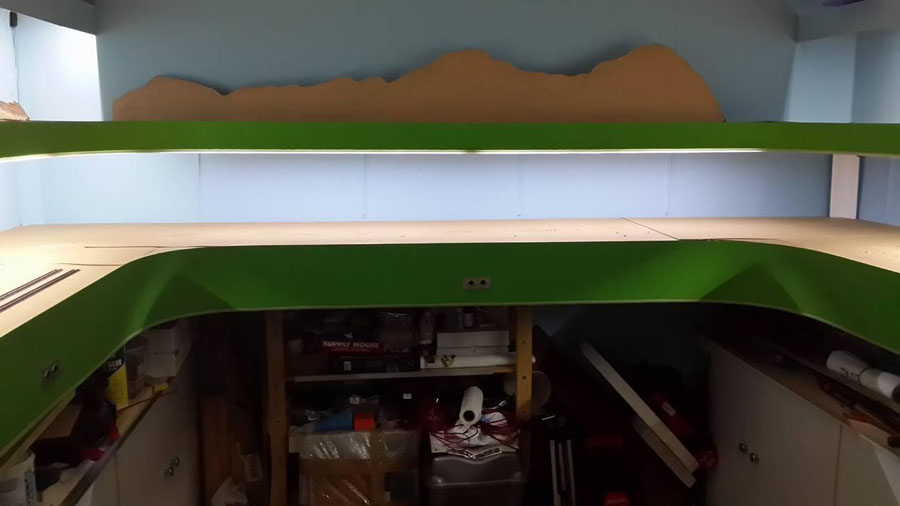 I put LED strip lights in place right around the layout. The top levels have lights behind the valances attached the top shelves. (Photo below) The clear rubber tubing split lengthwise was put under each valance as a protection against banging my head against the lower edge of the Masonite. 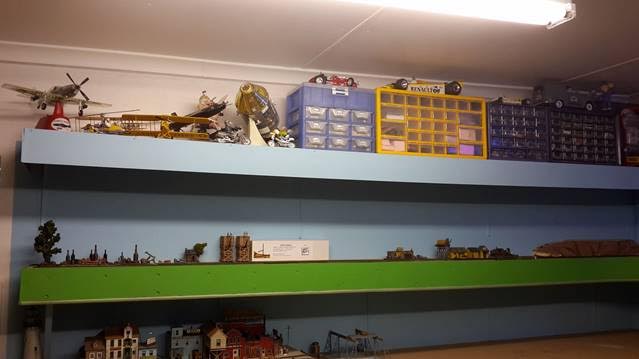 Once all the buss wires were in place and connected to both levels, the plug in points (3 sets of twin express Net) was inserted into the facia in appropriate places. These are for my Lenz DCC system. I have three controllers (throttles) and can be plugged in any of the plug in points around the layout. Although they are all on the front of the lower level facia board, the upper level is operated from all of them. The lower level boards are two foot wide and the upper level boards are 1 foot wide. All have a layer of 3 mm cork over 12mm plywood.

When the decision was made to not connect the two levels as the upper level was going to be a logging operation whereby logs would be cut and loaded on the left side (camp 4) and the taken around to the right hand side of the layout to the yard. There the log train would be sorted and then taken to the sawmill. (This section is still under construction) The photos below show how the track was marked and laid out according to the track plan to ensure clearances were maintained. The Spar tree for loading the logs can be seen in the foreground. 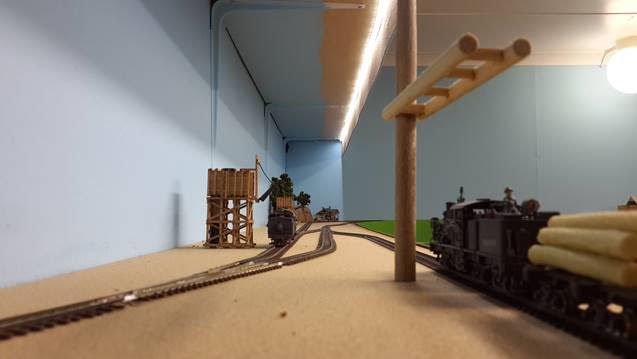 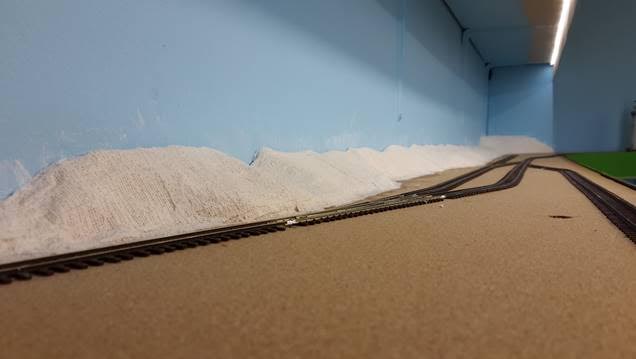 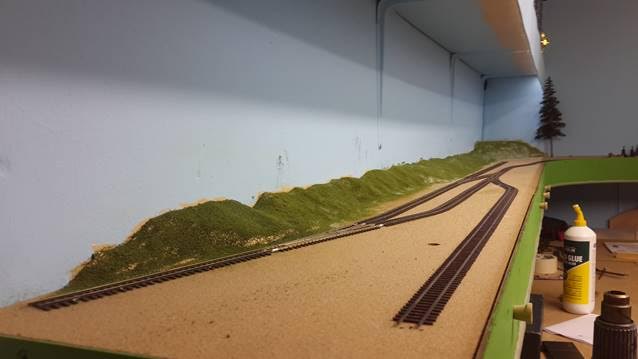 Plaster covered polystyrene was used to form a background hill and was painted a tan colour. Woodland scenics ground foam was added and glued down. 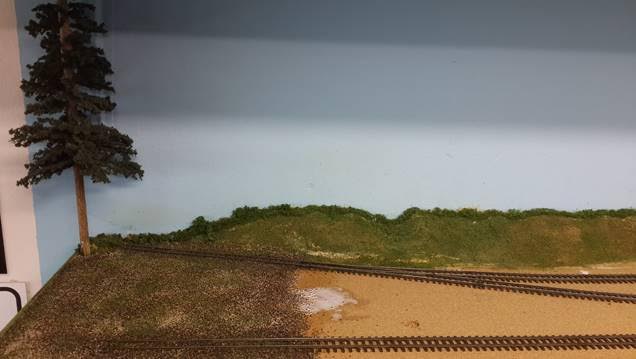 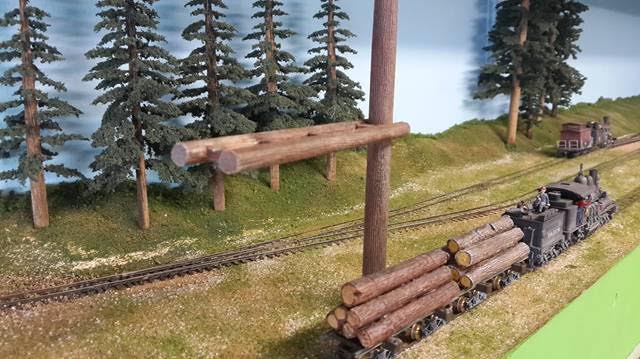 Ground cover (sifted builders sand) was added as a test to see if it gave me the right effect that I was wanting to achieve. I was happy with this and carried on doing the rest of the logging area knowing that a lot of it will be covered with all sorts of debris such as grass, bushes, wood shavings and sawdust. 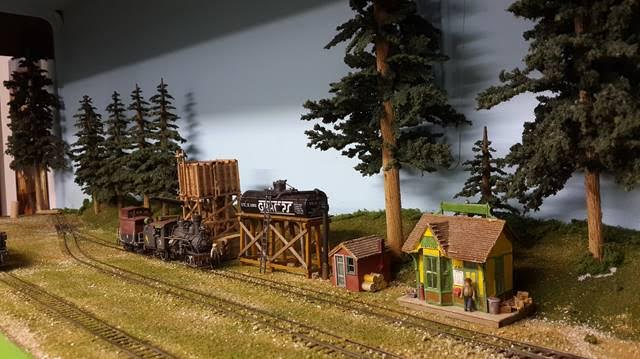 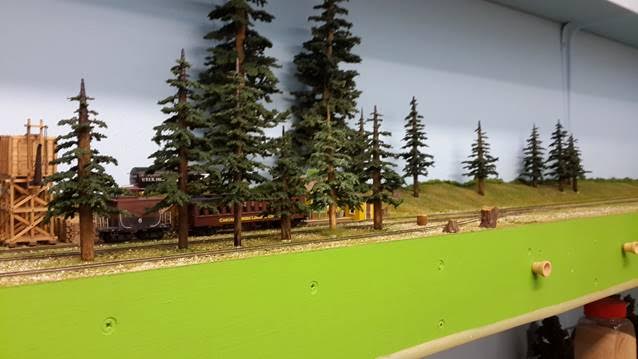 As a rough ground cover mainly under the trees in the background, I used a chopped up mixture of four different colours of Lichen from Preiser, different shades of glade grass and placed quite a few tree stumps from various suppliers around the area.

Next came the necessary facilities such as water, oil and sand for the locomotives. On this logging level, I run 2 three truck Shays, 2 Heislers and occasionally a 2-6-6-2 logging locomotive. In the photo below right, I like to have trees in the foreground, as in real life you have to look through the trees to see what is behind them. The coach behind the trees belongs to the Cascade Creek Lumber Co and is used to bring the loggers up to the camp for a day’s work.

A few photos taken around the logging area. 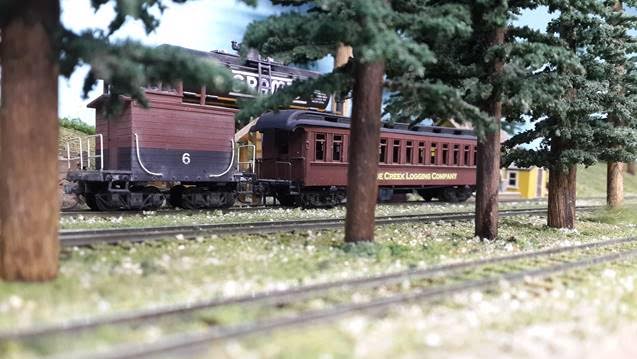 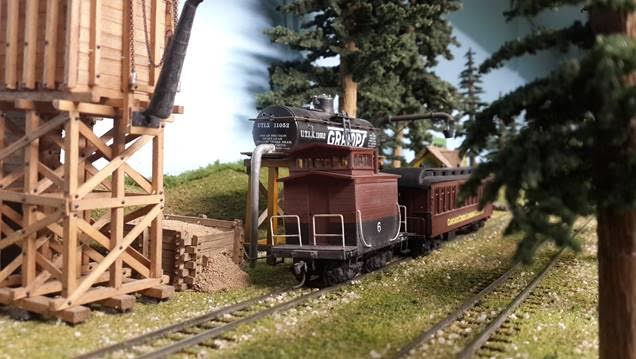 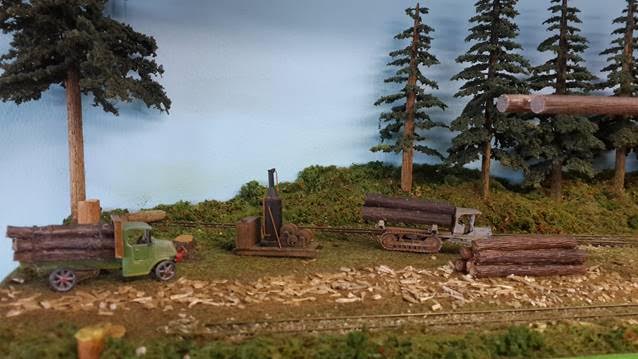 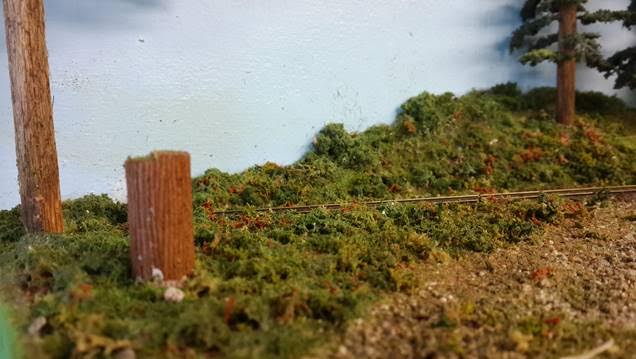 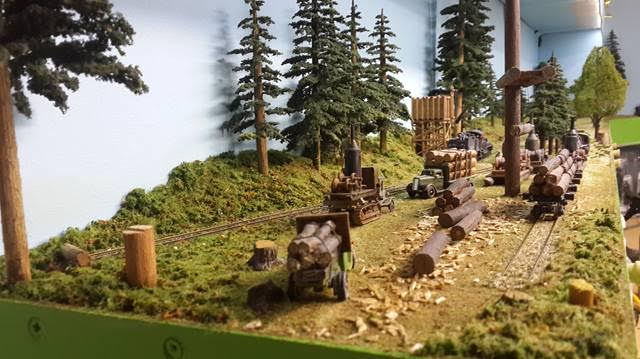 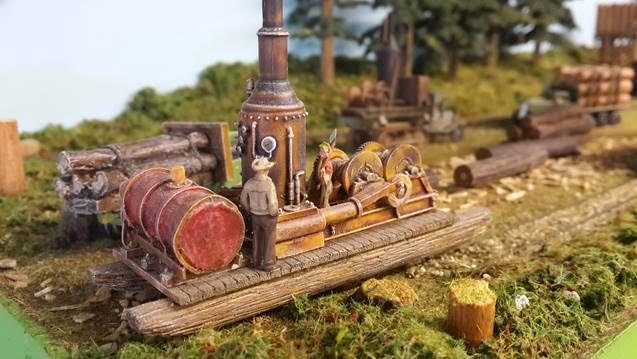 This is as far as I have got on the layout as far as scenery is concerned. This leg of the layout is now fully operational and needs the finishing touches such as figures, clouds on the background and tall weeds around the trees. The foreground has a steam donkey for loading and pulling logs in. 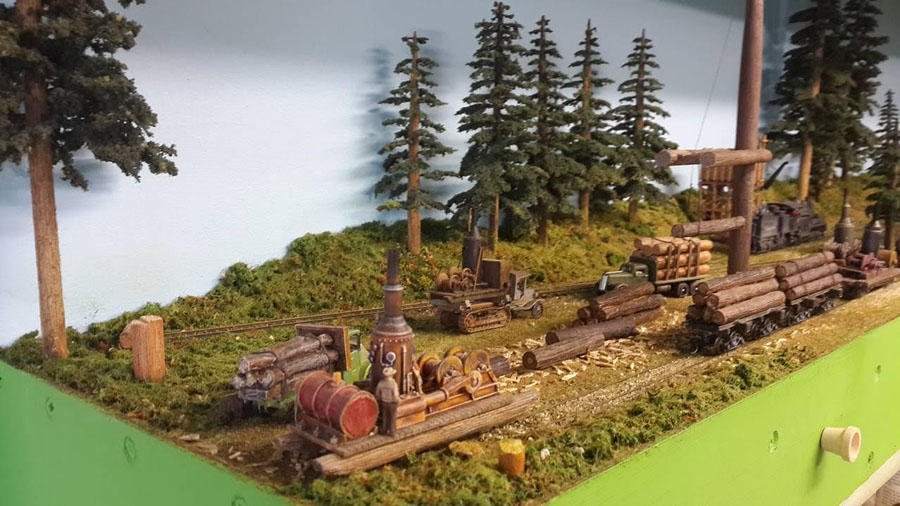 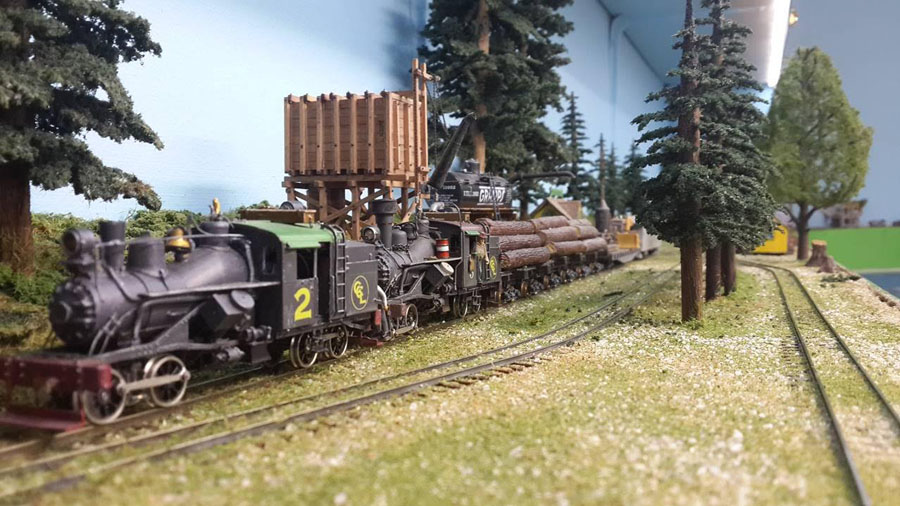 A lot of work still to be done before I get to the lower level. 9 months work from start to its current state.

A huge thank you to Brian – hope you enjoyed it as much as I did. Amazing stuff.

You can see more of Brian’s posts in the Hall of Fame.

That’s all this time folks – Beginner’s Guide is here if Brian has got you chomping at the bit.