When we got hit with Covid, and I was sitting around the house so bored, someone said to me that I need a hobby.

Well, I thought about my interest in trains, and helping my stepfather build his layouts when I was very young.

Most of my family were railroad people working for the B&O railroad at the time, and I was living in Baltimore where all of the facilities were.

The museum is still there, but I haven’t been back in many years.

I started reading Model Railroader, and began getting your tips with your readers sending in their layout photos. As you say, it’s all about getting started, so I did.

I was a sales representative in my prior life, and know nothing about carpentry, electricity, tools, etc, so I had to read a lot about everything, and was amazed how model railroading has changed since my early years.

Most everything was Varney and Athearn kits in our basement. I had to learn about building the benchwork, wiring, DCC, and constructing mountains and tunnels. Well, I found out real fast, that I
could forget about the latter for now.

After three attempts, my mountains looked like multicolored lumps of foam and plaster. I am not very “artsy”, so, I just was content to build this first layout with just a rocky pass at one end. I am no longer in the days of brown mountain paper you could just wrinkle up, and there it was. That was then, now at 83 years old, the world is a little different.

I tried to use everything available in these modern times, so I could judge the pro and con of it all. That way on my next layout, I might know what I wanted to use, and what I did not want to use.

There was quite a learning curve for everything, and things got re-done many times. Most of my buildings are card stock, and you might recognize a few. I also used Model Builder software on my computer, trying to copy the looks of structures around my neighborhood.

I used Kato track because it was so easy with sure connections, but I later realized that it was sort of “limiting”, so I will use different track and roadbed next time. I will also make my layout larger so I can do more with it, as I learn to make those mountains and tunnels.

I went DCC using the starter control from Digitrax. I have that coupled with a row of Kato individual controls for my turnouts. Some might call this a “jury” rig, but it works for now until I learn more.

Living in Florida with constant high humidity, and having my layout in my garage (no A/C), I found things like the asphalt-like roadways shrunk over several days, so I had to revise how to install them. I just put patches in some of the seams to look like “roadwork repairs”.

Long story short, I am having a great time doing my first layout, and looking forward to a second one with improved methods, and material. It doesn’t represent any real life scene, but it is my little village of Rockingham named after the street on which I live.

It’s the first thing of this kind in the neighborhood, and everyone stops by to see how things are progressing.

These are a few scenes of my first attempt. Keep up your good work, and keep those tips coming. They give novices like me great ideas and advice. 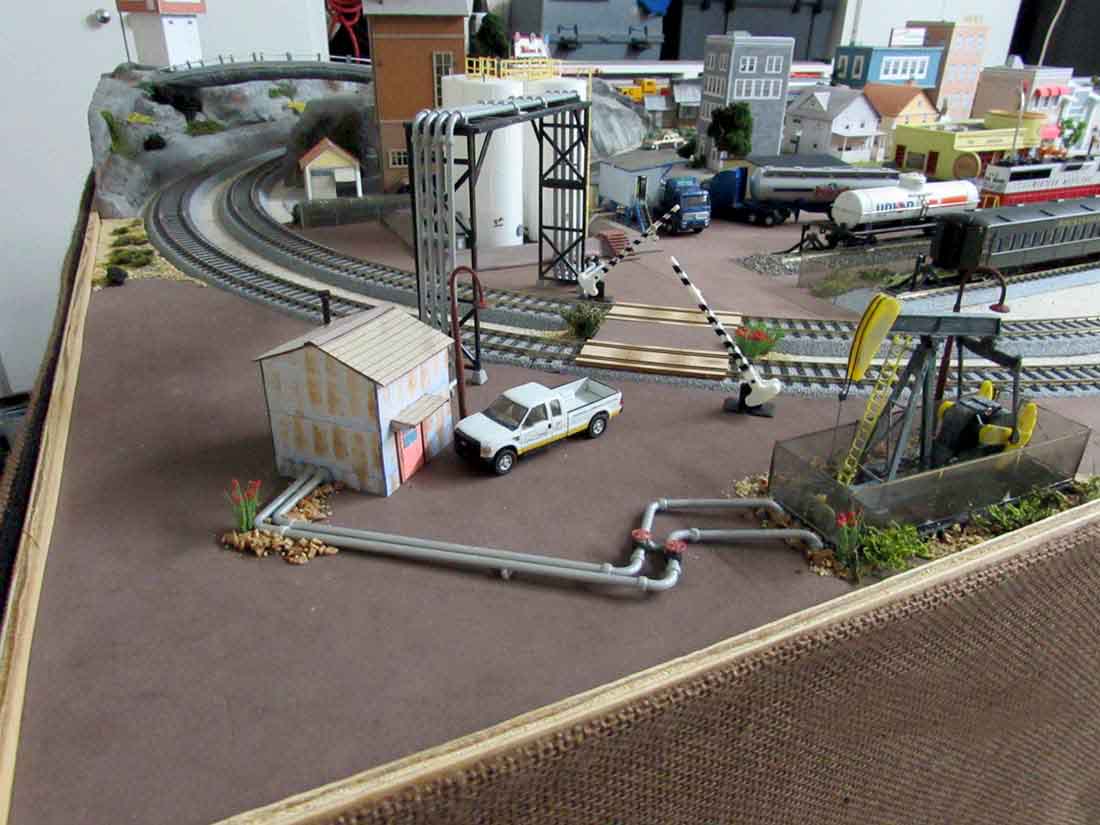 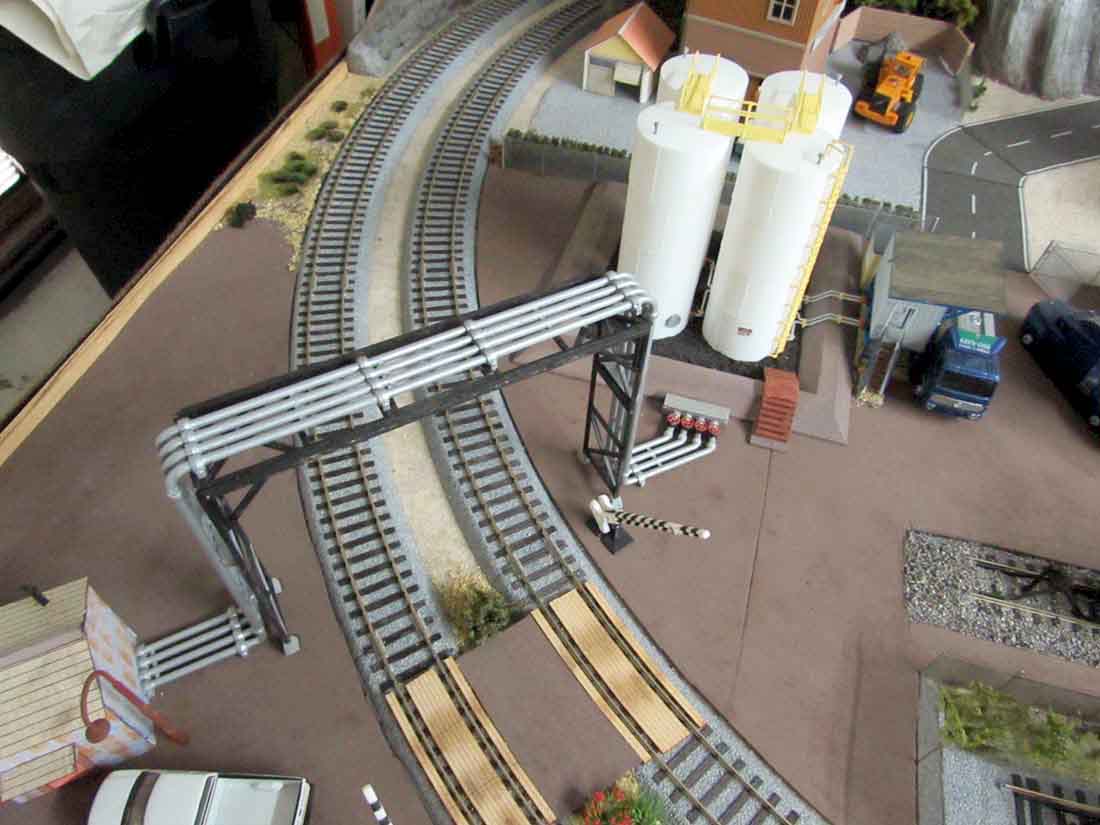 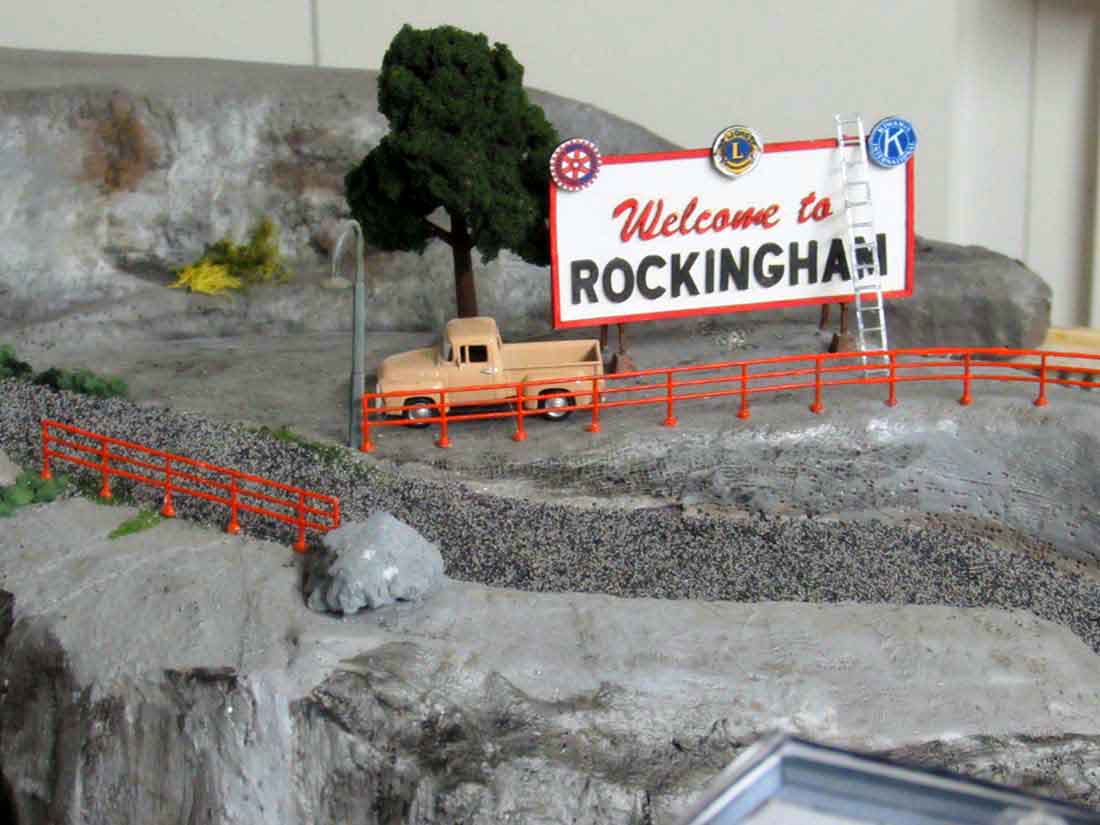 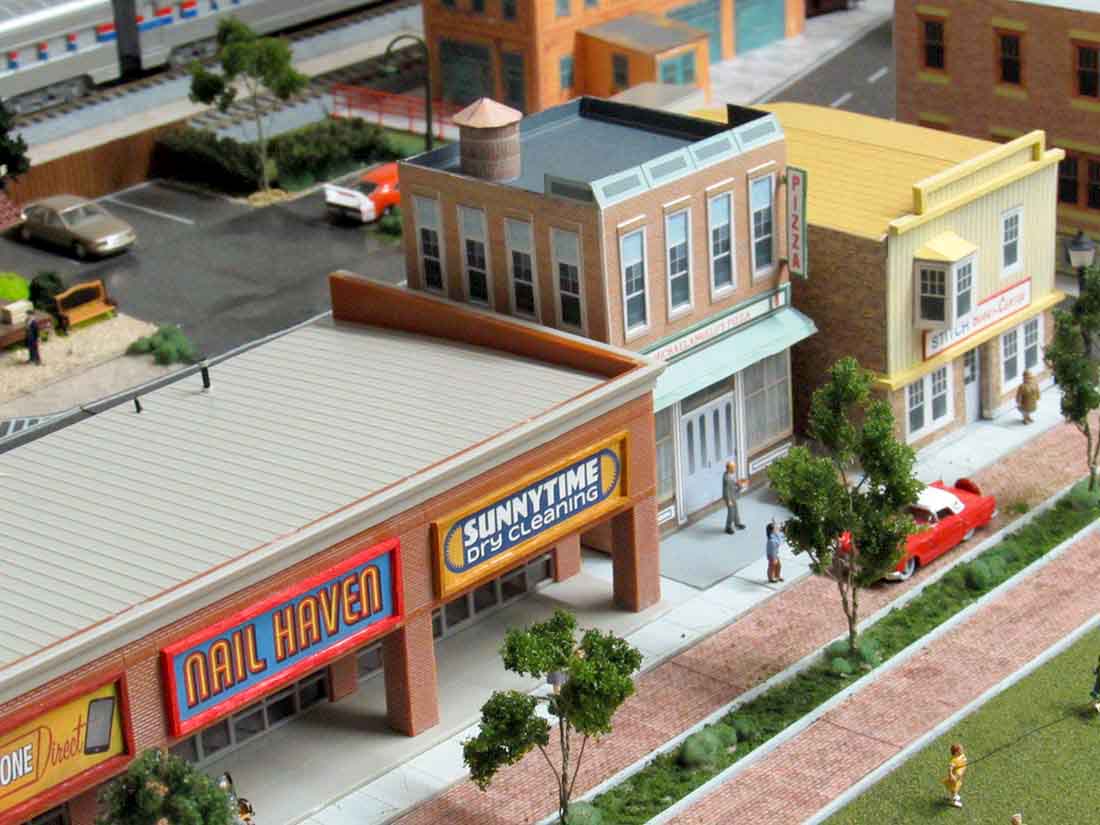 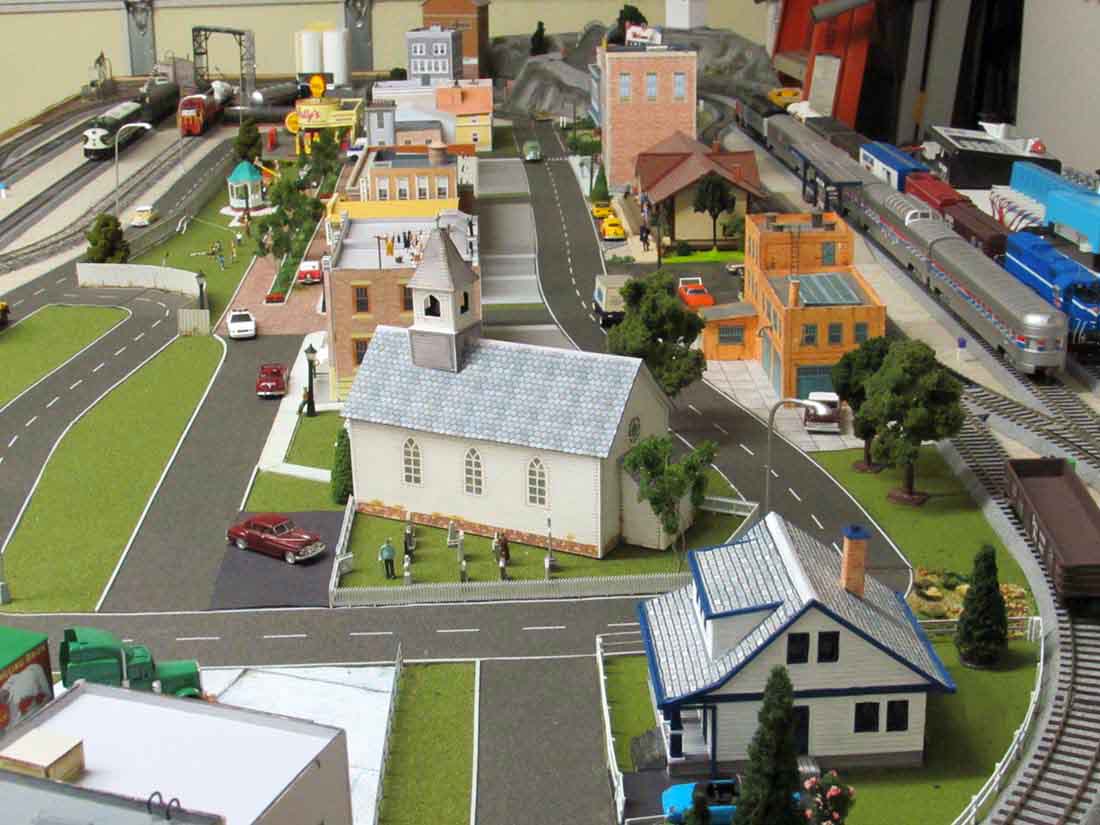 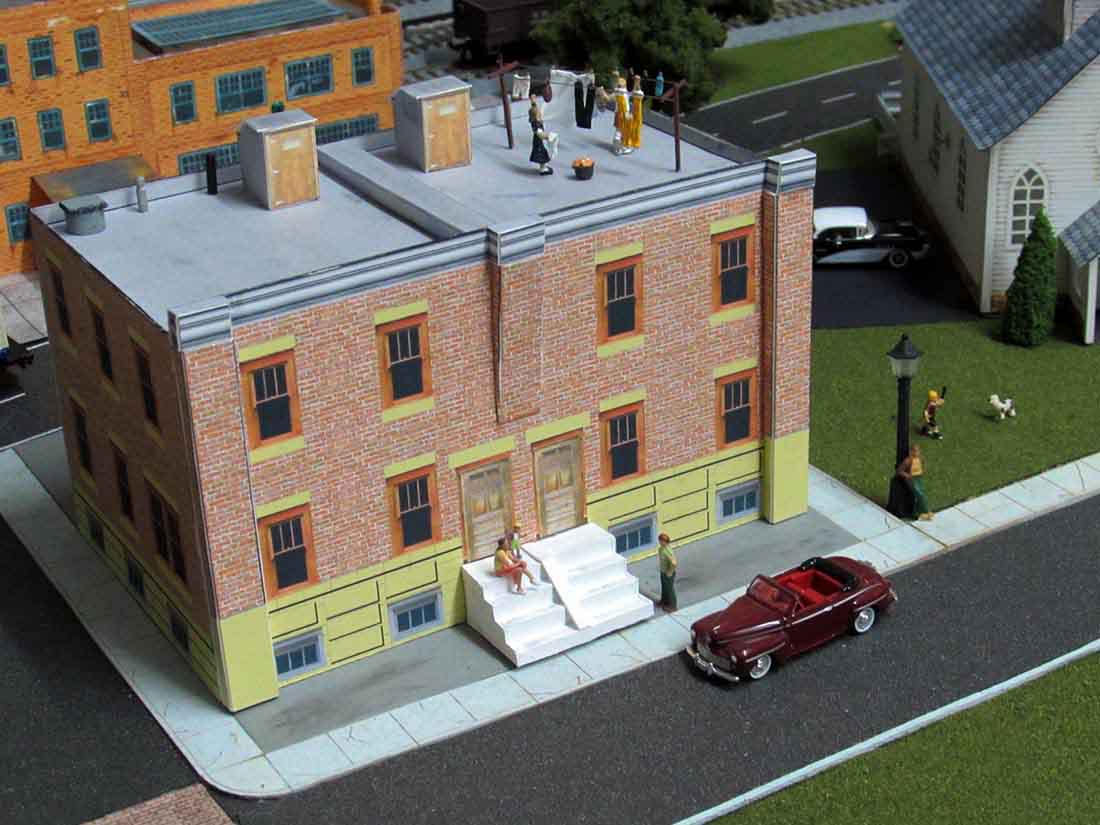 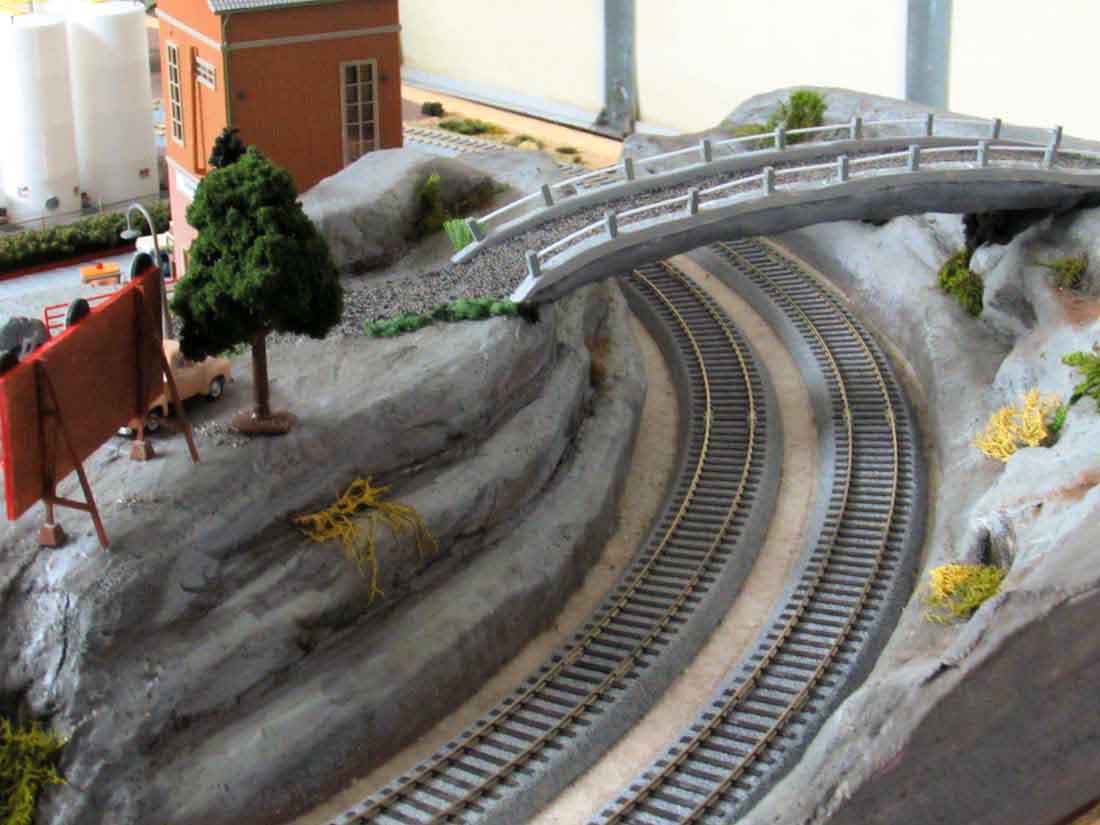 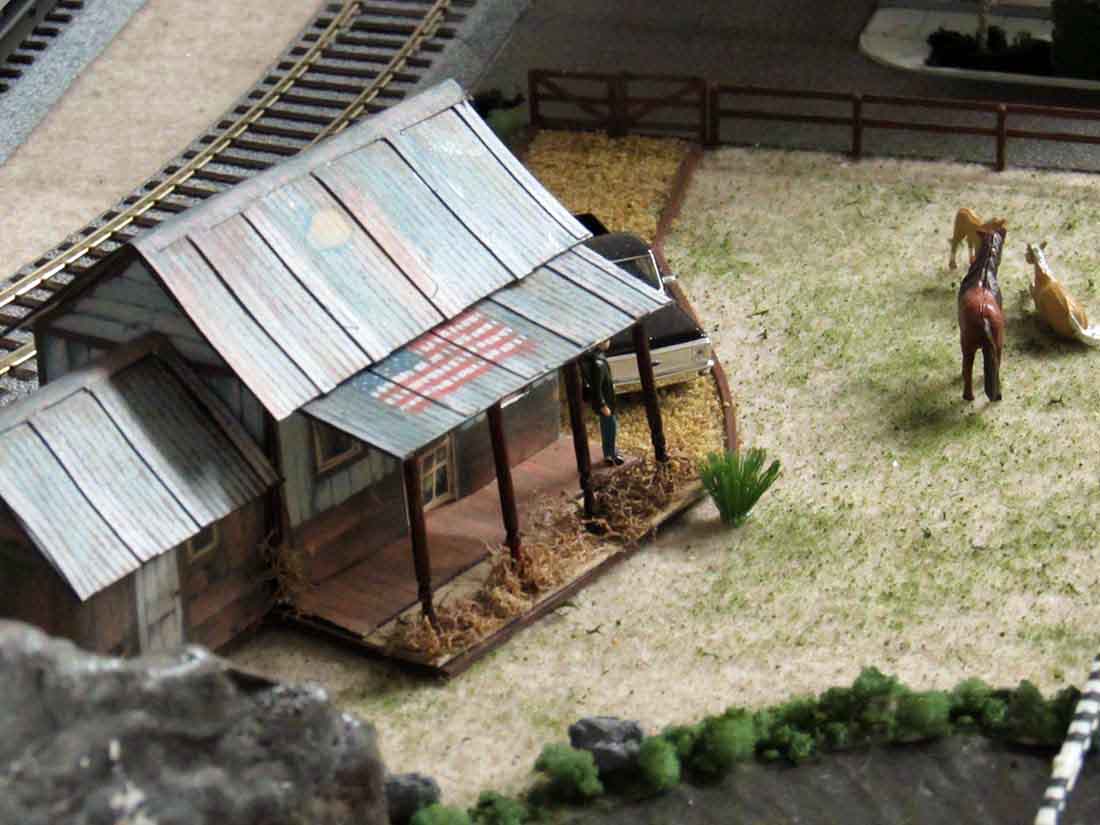 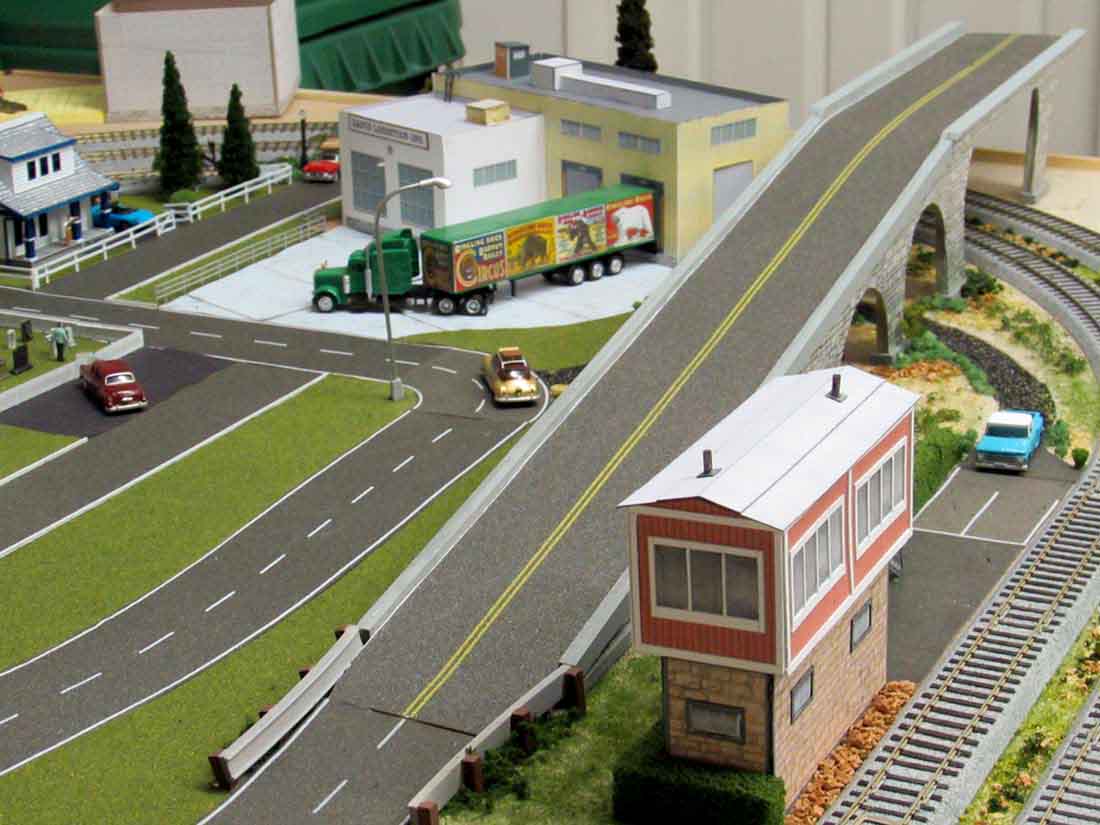 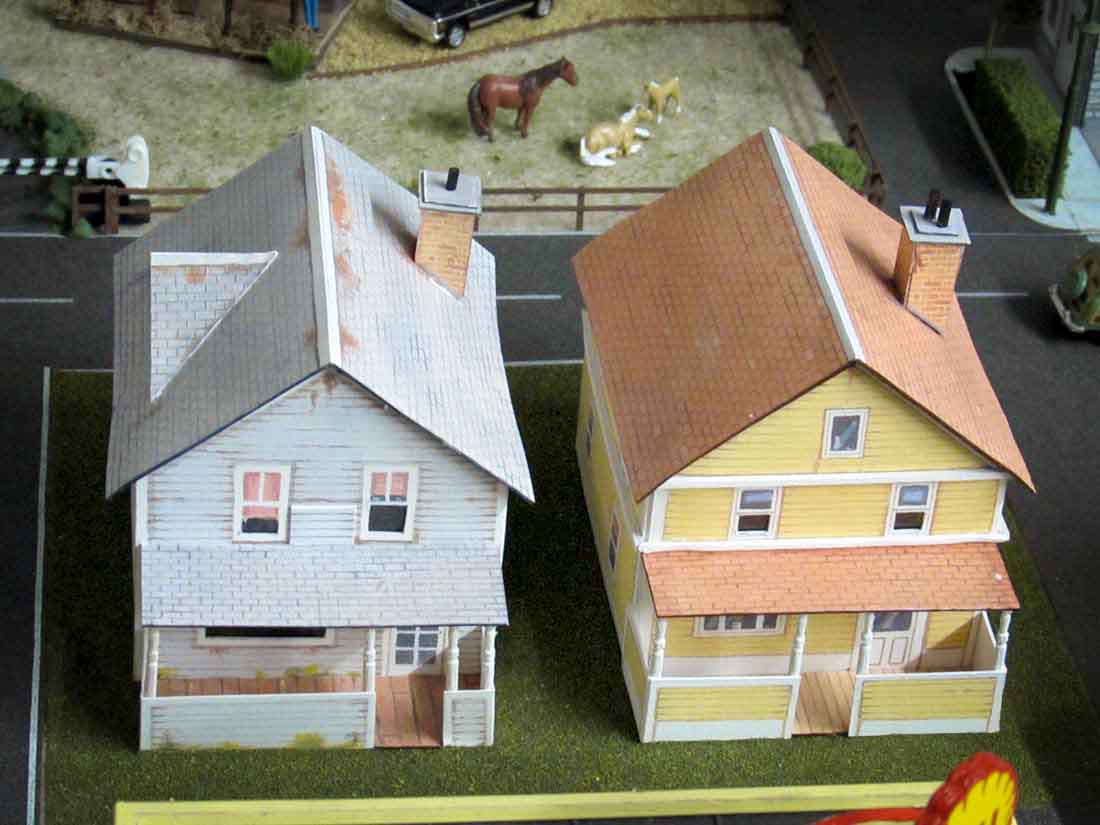 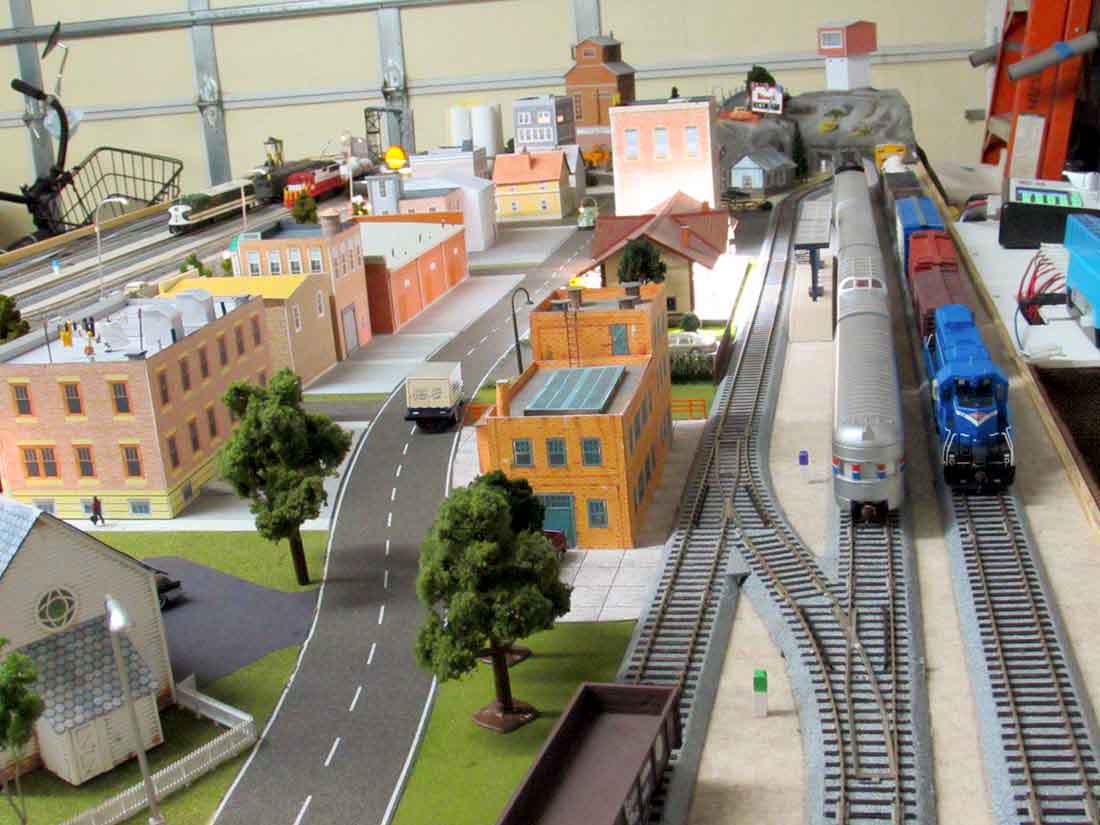 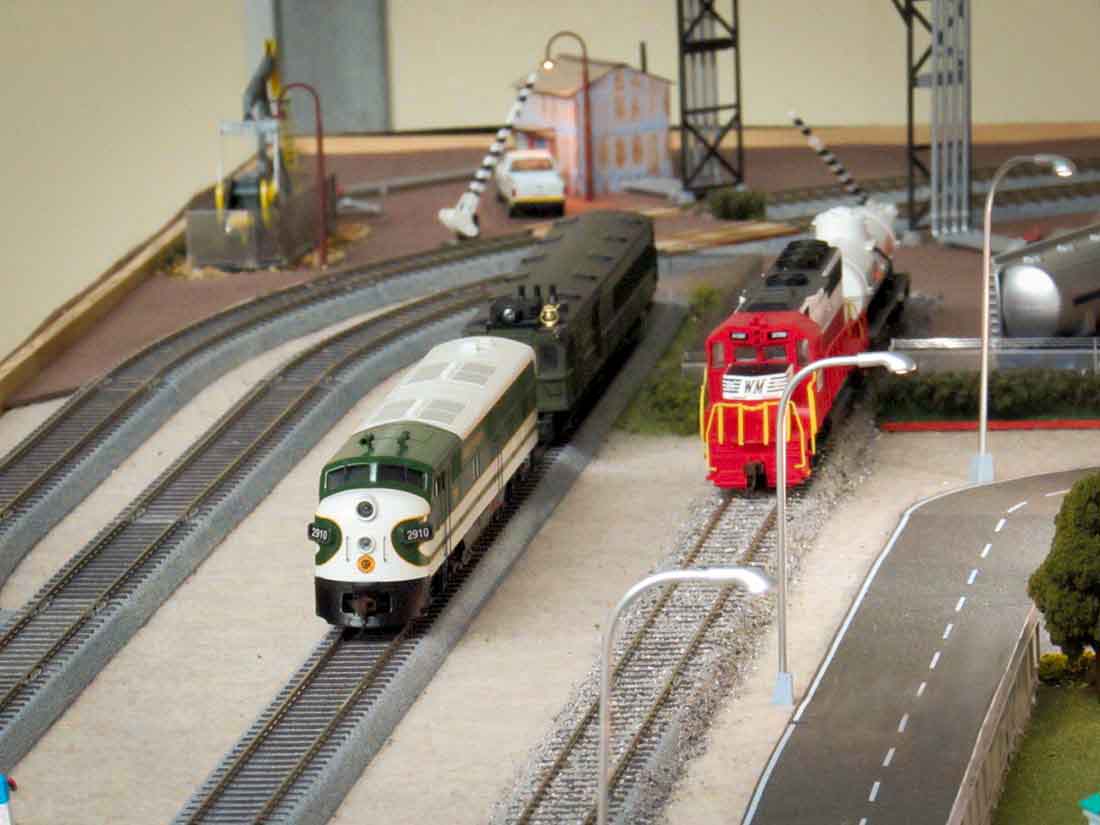 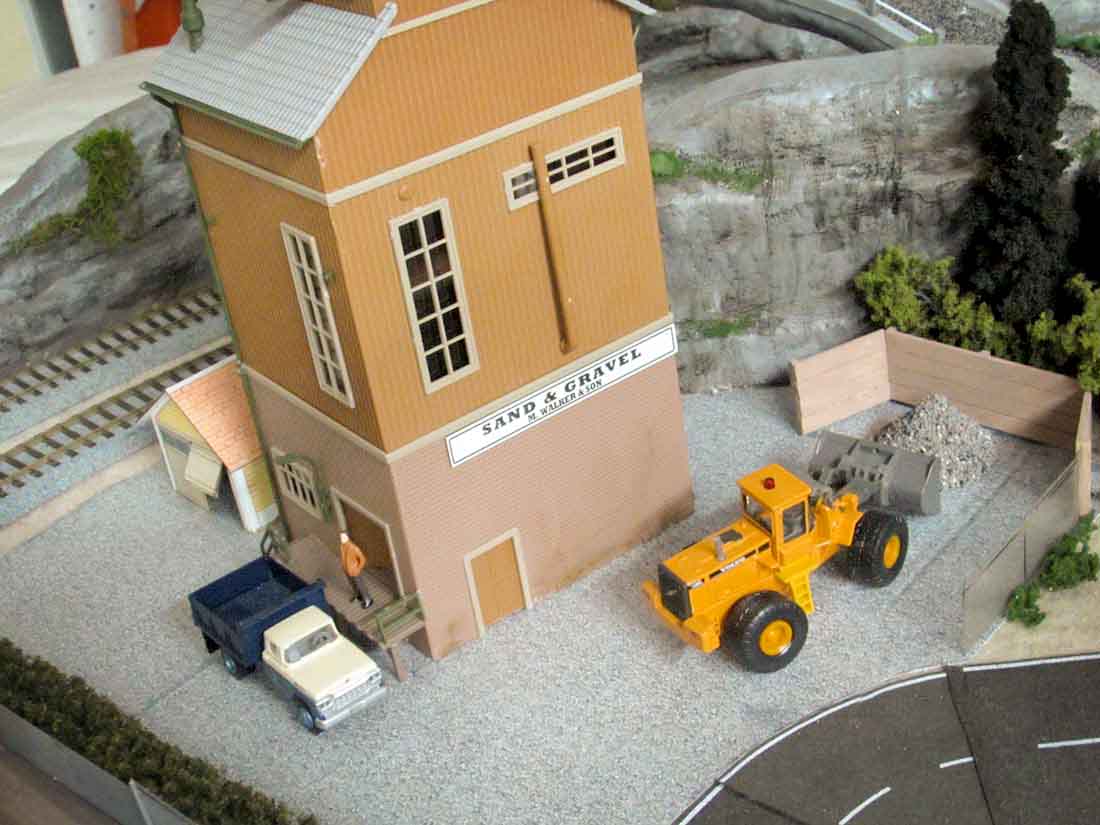 A huge thanks to Don for sharing his 4×10 HO scale.

Of course, I’m biased, but I think those buildings look great – he’s done a really good job on them. Especially the houses from the printable buildings..

Please do keep ’em coming. I know I’ve said it lots recently, but it’s really thin on the ground this end, so if you have something to share, now’s the time to do.

And don’t forget the Beginner’s Guide is here if you want to make that start, just like Don did!