I only had a small space at side of my house when I downsized. I previously had a 6mx3m set up in one bay of a 3 bay shed.

This time I had space only for 6m x 1.2 (into .9 in middle) – I put a cover over the verandah space and stopped water from coming into the area.

It is what I would call a dog bone with 2 tracks around the outside and an industrial area at one end, town with station in middle and farm/cattle at other end. Lots of sidings etc

At the back the internal line of the 2 running around the whole set up, spurs off to the right then goes up an incline to the inside of the second level, where it again goes into 2 lines running around the perimeter, with lines off at some locations and the ability to run from front to rear, changing direction of travel.

Again the internal line has points off to another elevation where it again comes into 2 lines running right around. It gets interesting here as on each end I have helixes rising 3 loops to the top and trains can run from one end to the other up one helix, down the other and continue. I have farm type sidings at each end on the top level, as well as various sidings/spur lines etc.

Total line length is over 200m and I am able to run 6 different trains in whatever direction continually on the 3 levels.

Like all set ups, still a work in progress (mostly slowed by time off for medical stuff you get as you age).

My grandsons love it and can work it all. 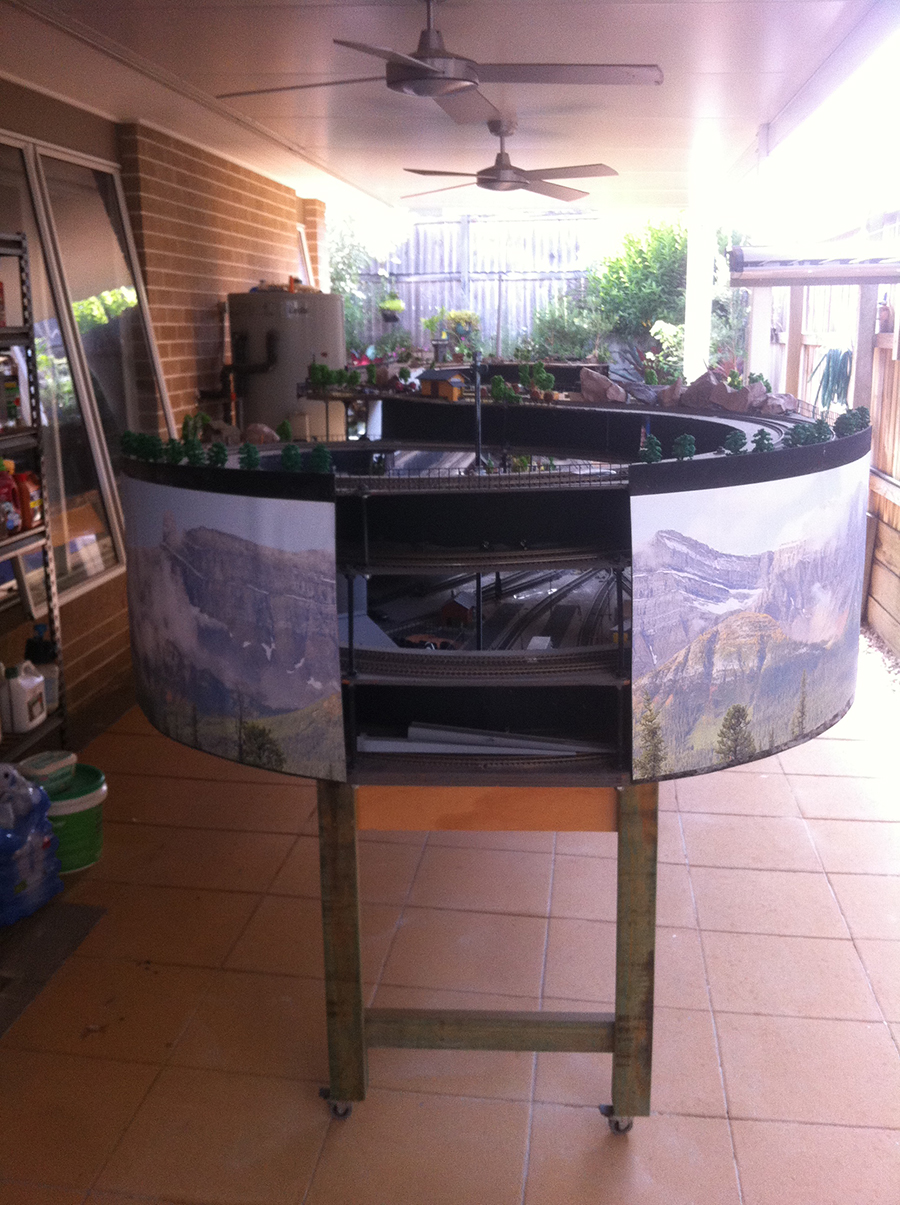 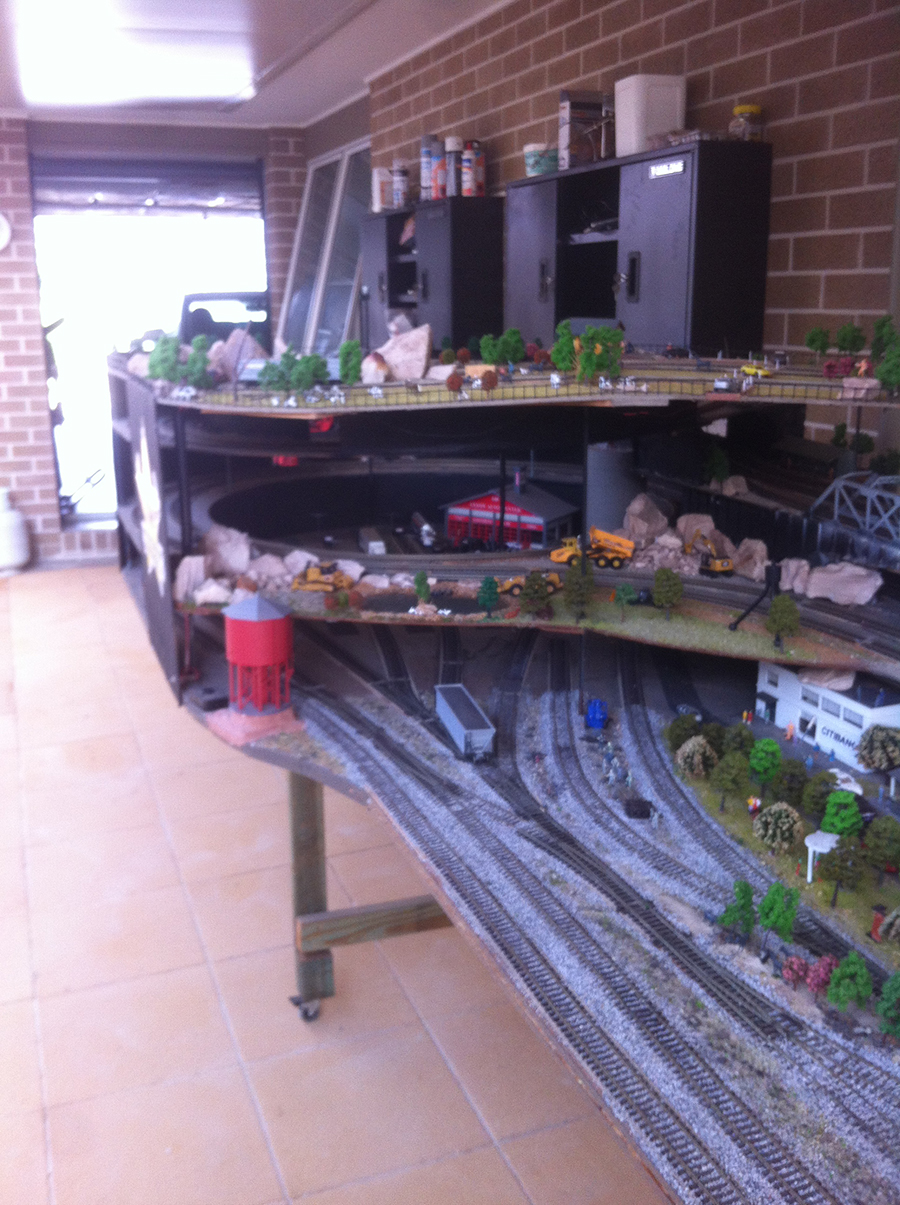 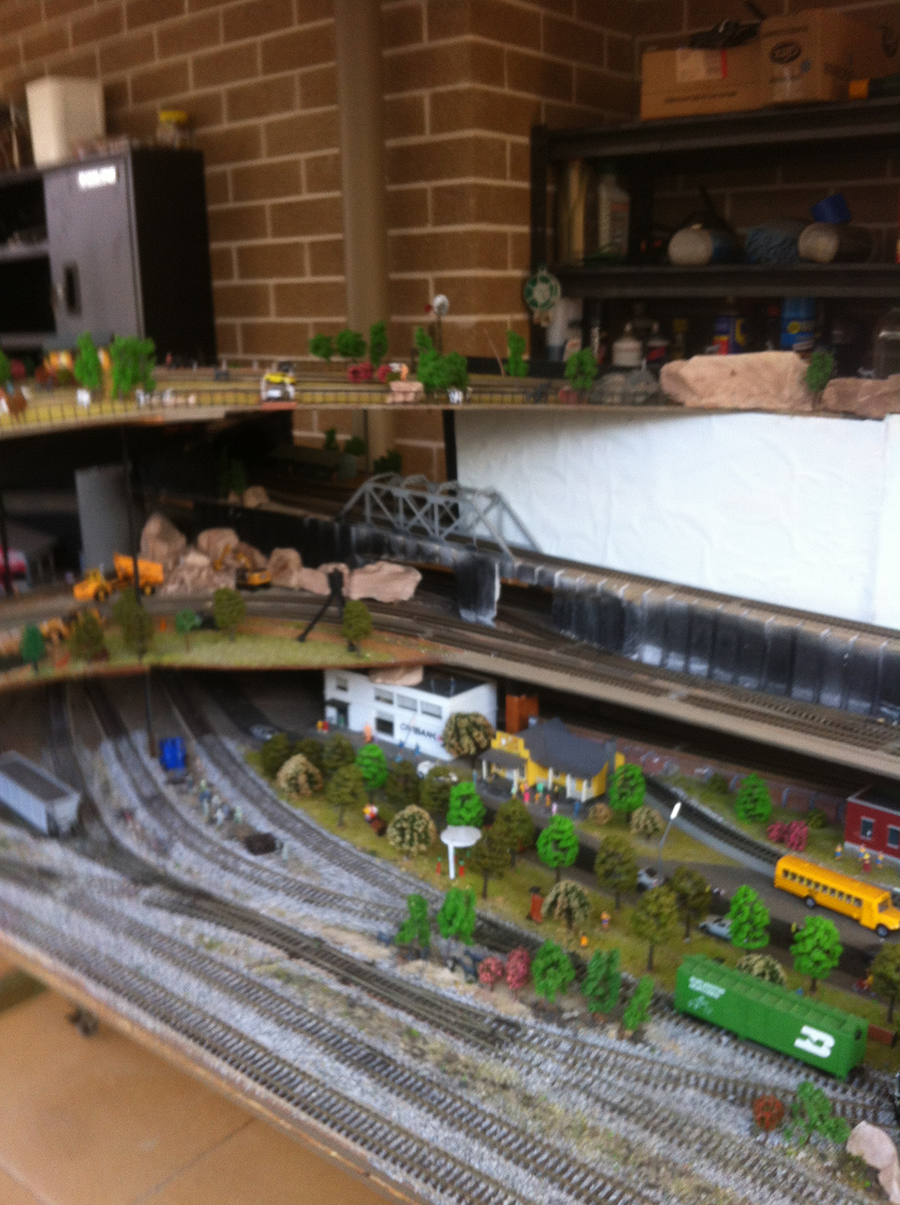 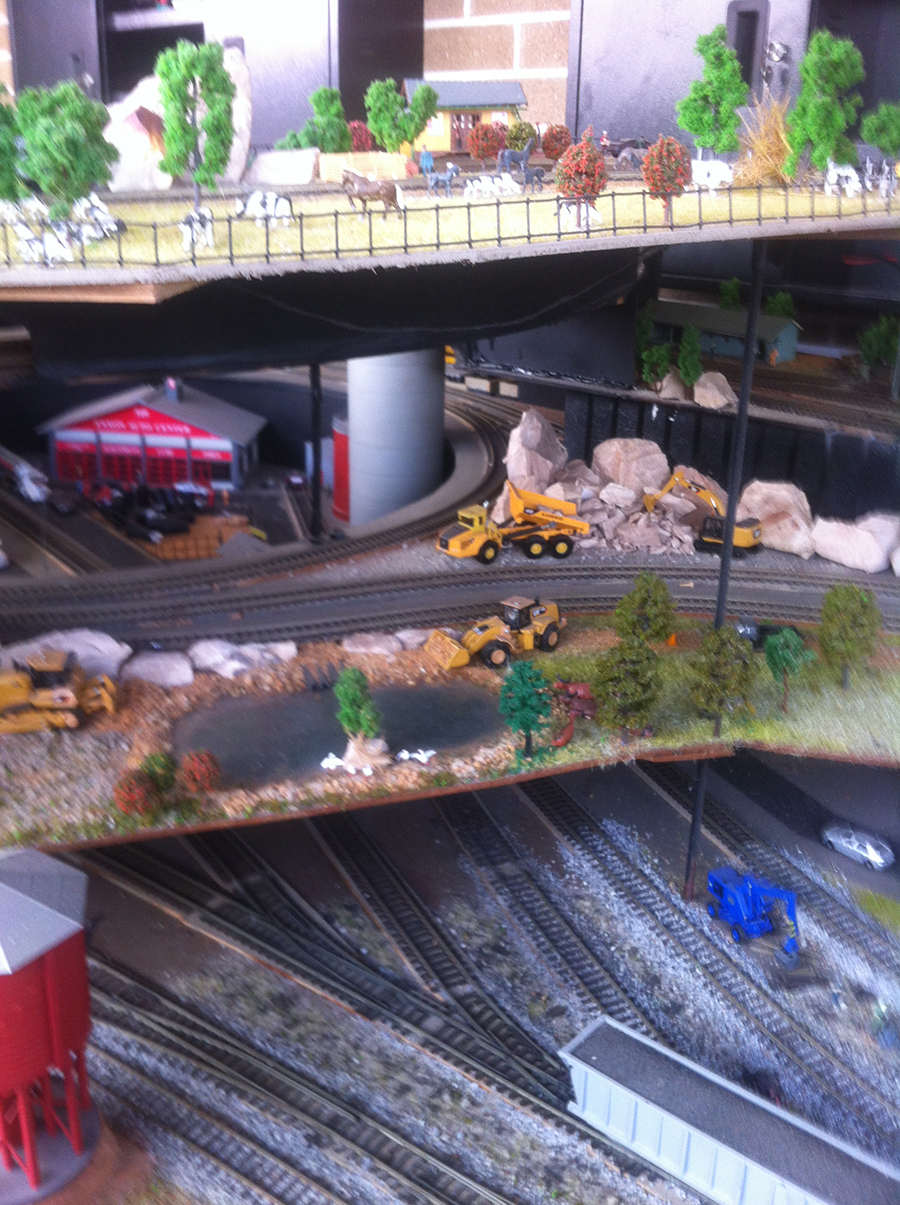 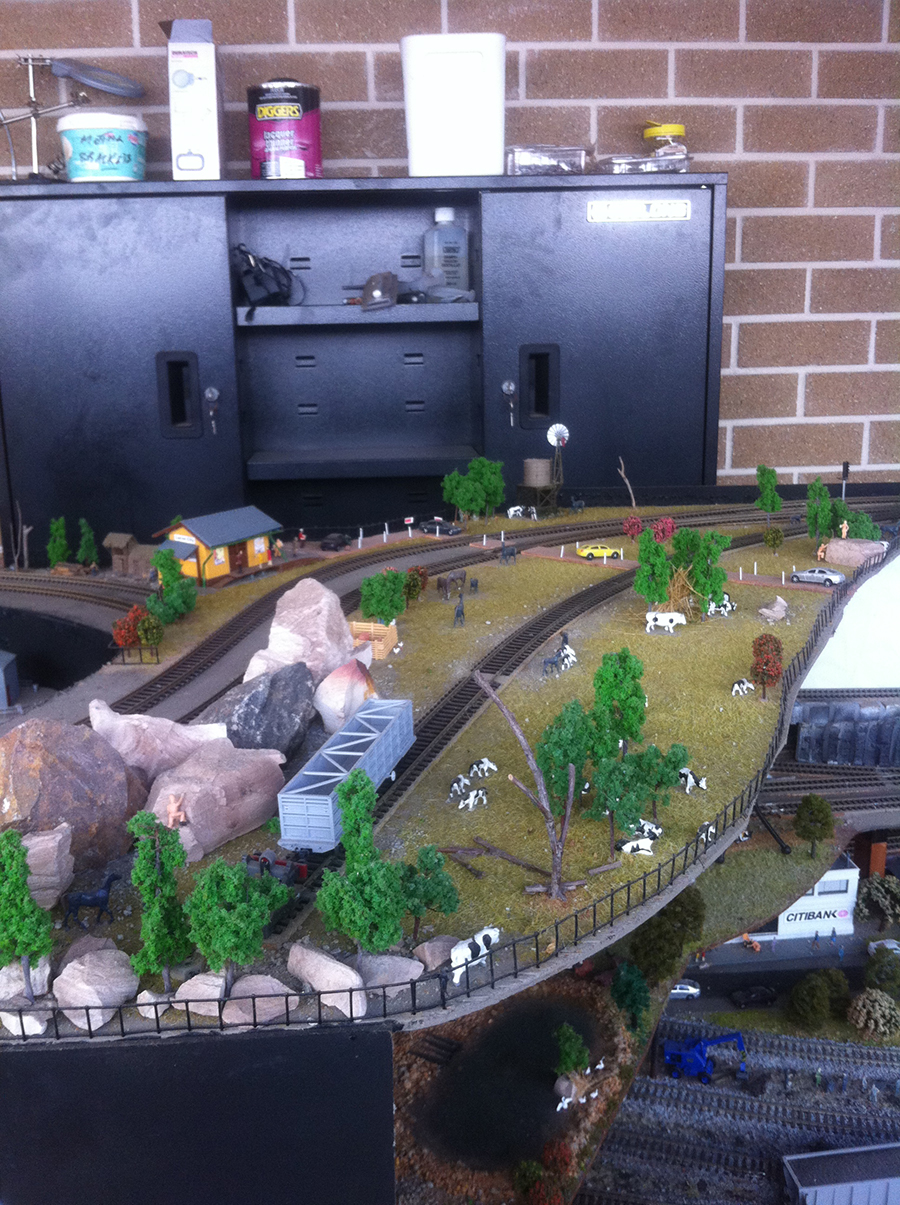 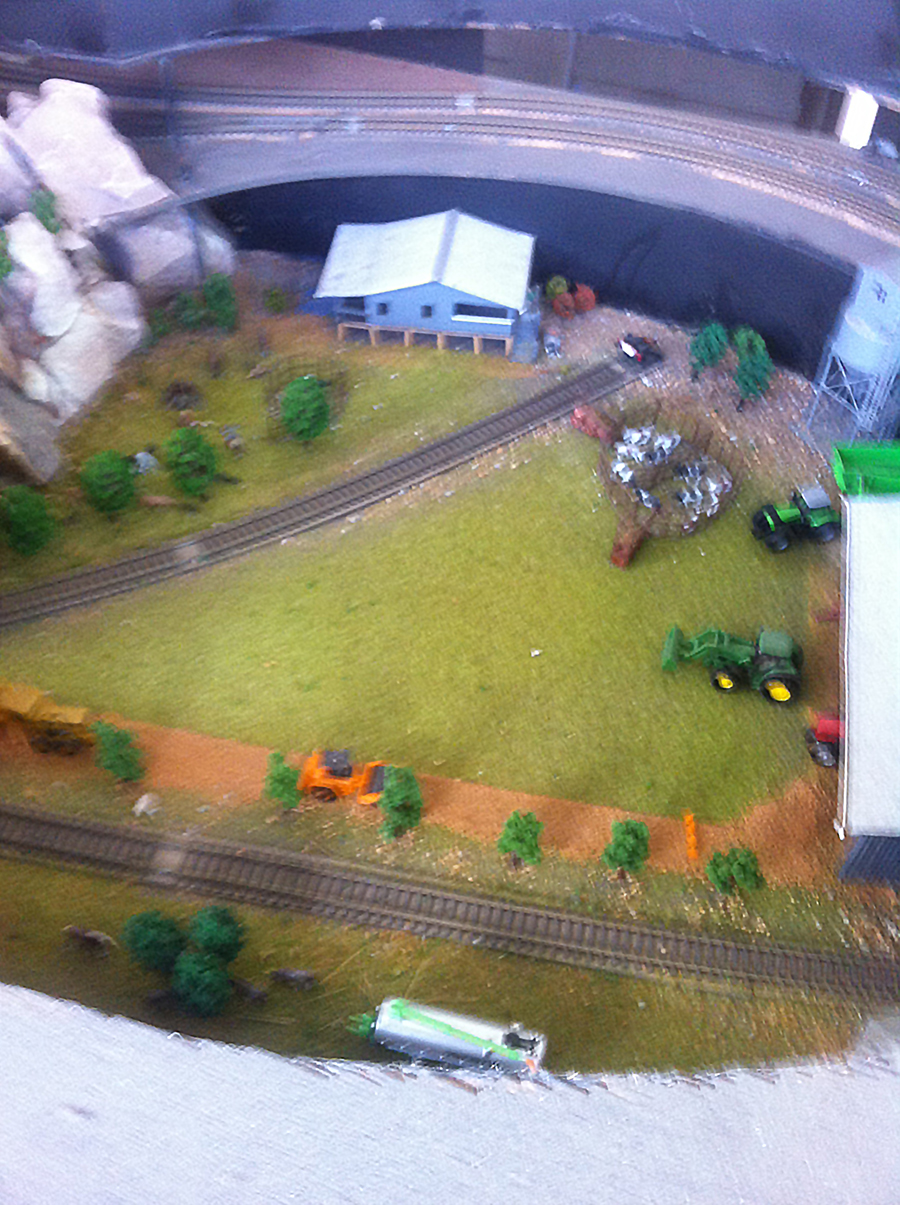 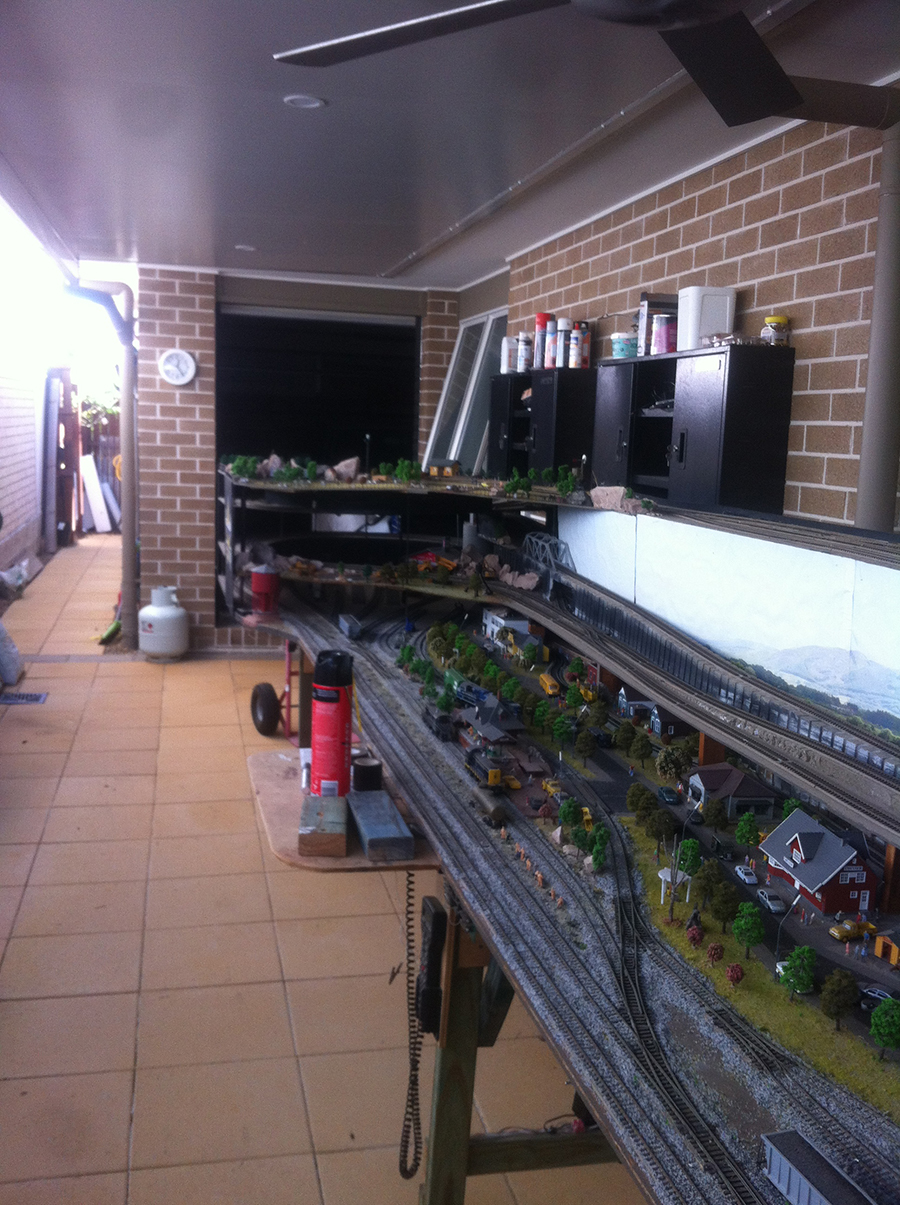 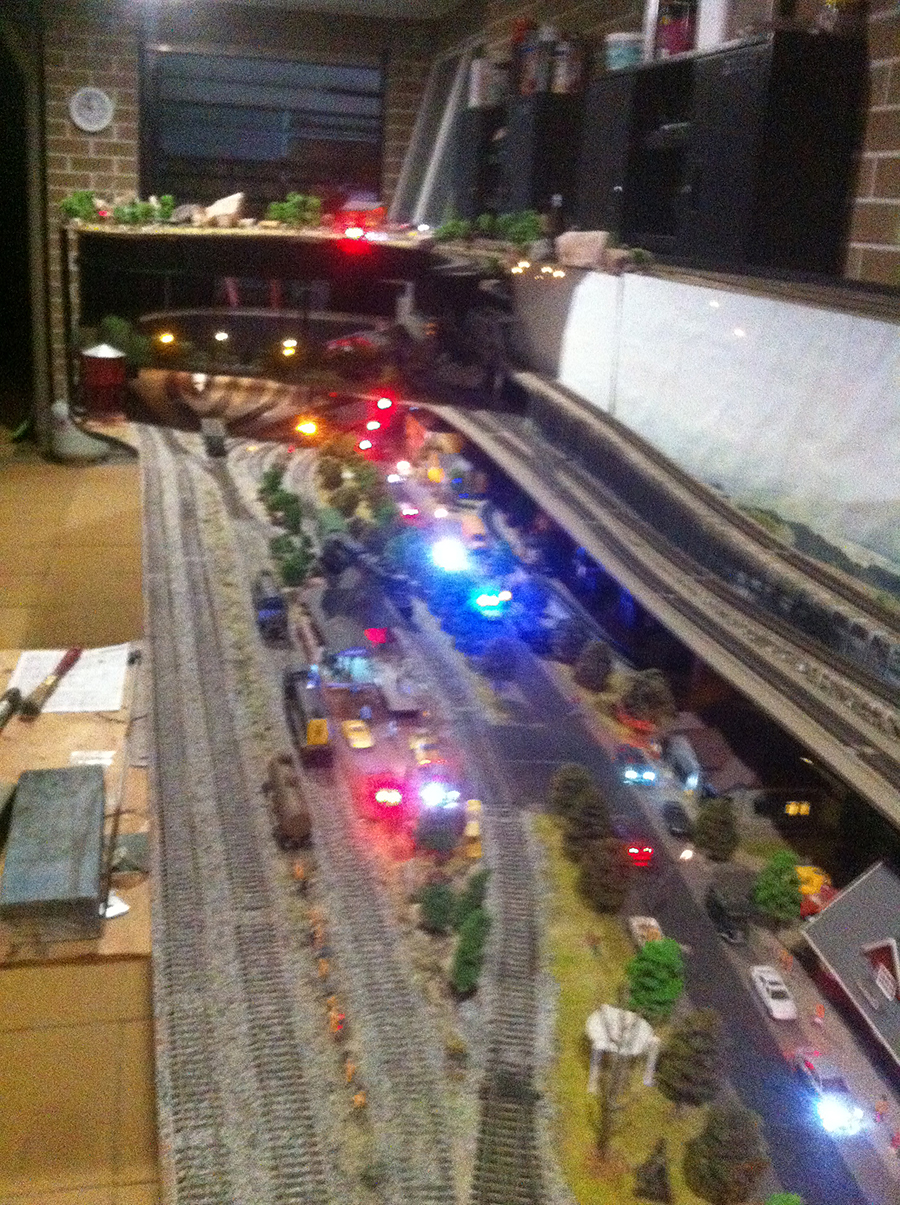 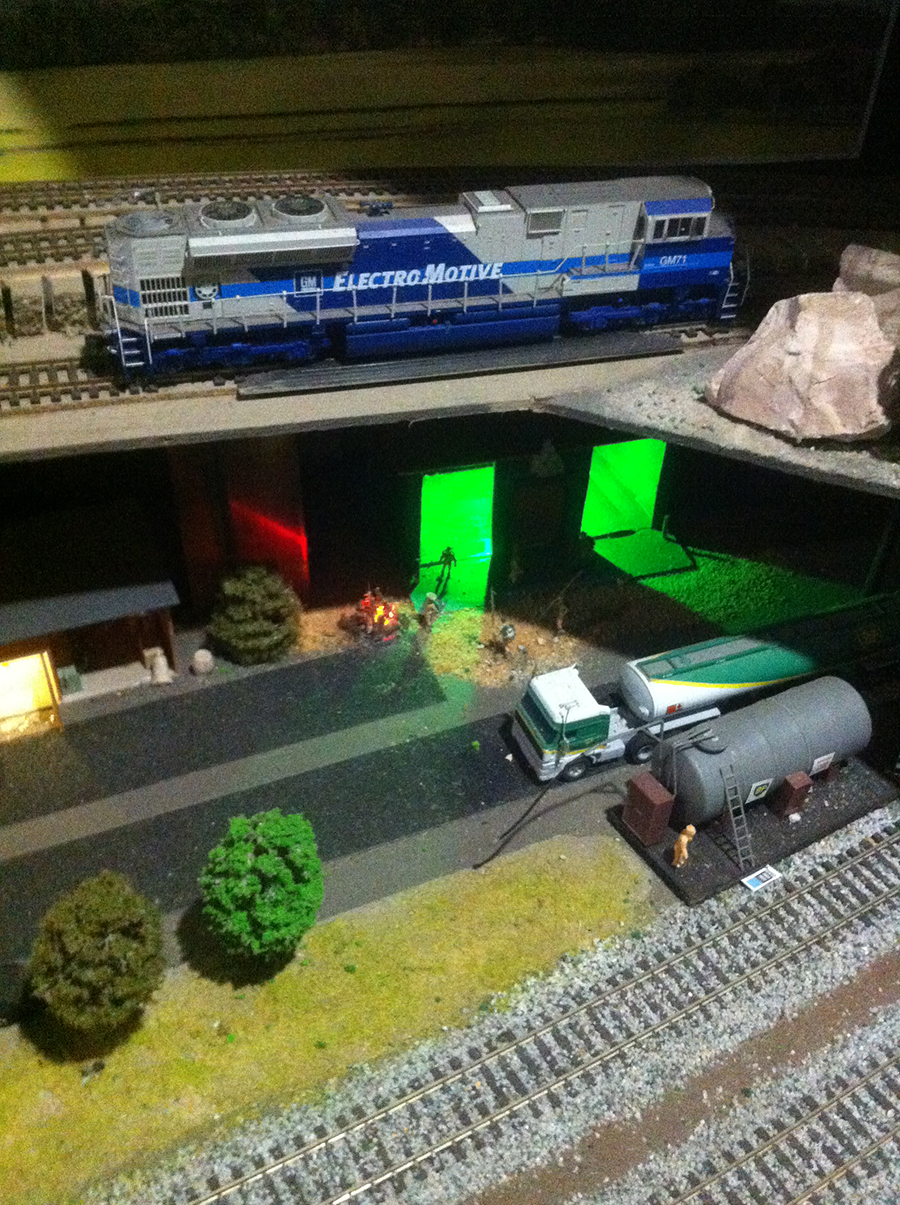 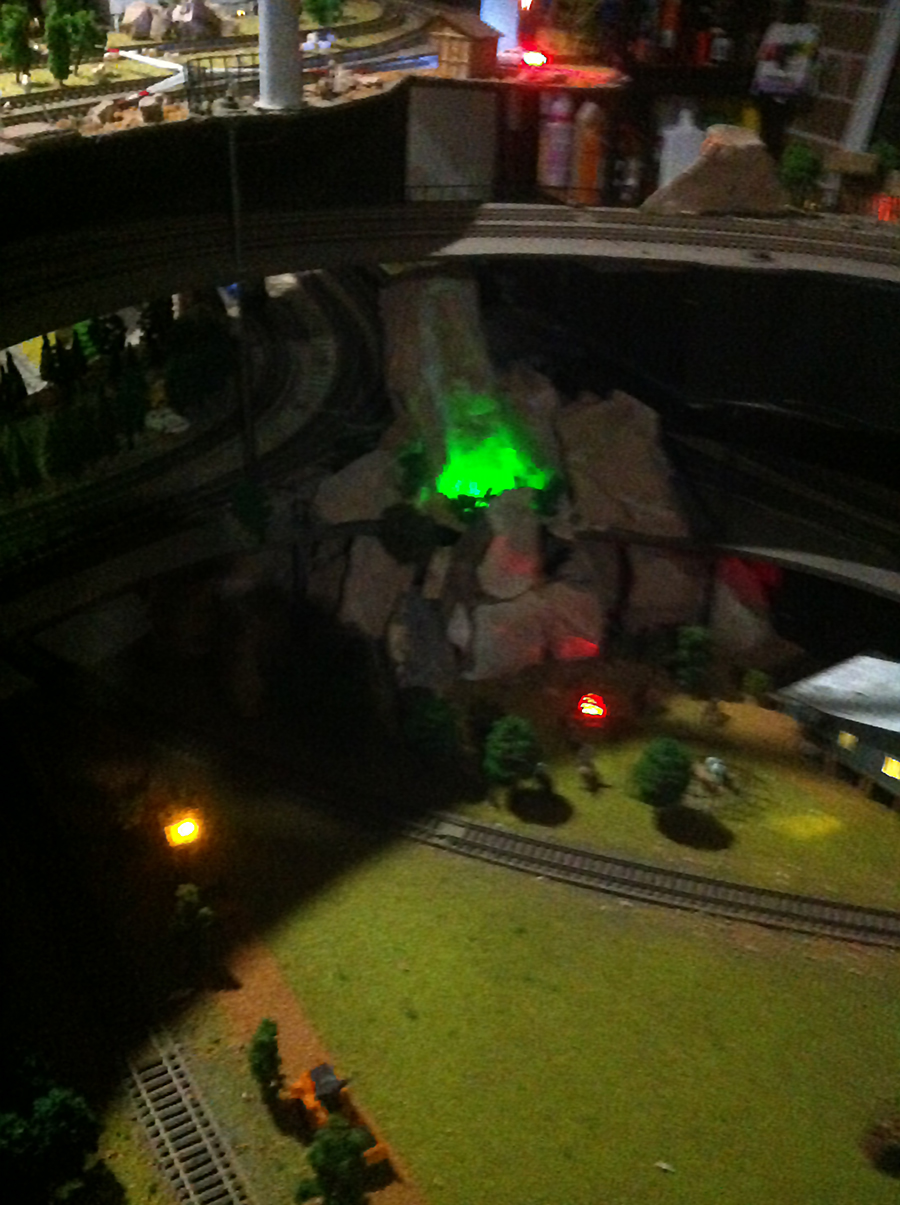 “Al: Greetings from South Louisiana. I have been receiving your emails for over a year now and have learned much from all your contributors as I begin rebuilding my multiple layouts.

First a little history. I am 70 years old, recently retired and have been into model railroading all my life, the last 15 years with a club based in Jackson, LA.

Almost 3 years ago, in the Great Flood of South Louisiana we received about 33 inches of water in our house. While it did not top my layout, I lost considerable equipment stored below, much irreplaceable 1950’s American Flyer.

While rebuilding, my wife decided we needed a wooden storage shed as there was no available storage in the area. We purchased a 10X16 shed and the only mistake I made was not going up to 10X20.

As my wife was retiring shortly after, she took my prior train room as her craft room and upon emptying the shed, it would become my man cave. We poured a slab, moved the shed, fully electrified, insulated and covered the walls in 1/8 inch plywood (easier than wall board).

I then built the double track G Gauge around the ceiling including an 8 foot truss bridge over the double doors. That has been up and running for 2 weeks now. I have now completed all benchwork using wood and hardware salvaged from the flooded garden shed, saving several hundred dollars. That was finished yesterday.

Today I celebrated the initial running of the Amelia branch of the Cajun Yankee and Southern Railroad, named after my favorite granddaughter. While only a temporary loop, at least I will be able to run trains while I work on the full layout.

My plans include two mountains along the back wall with at least one tunnel and and a bridge. In addition I will have a large freight yards and an industrial yard of some sort.

As an added bonus I was able (with the wife’s blessing) the crossing signs and lights which will be erected next to the shed after I clean it up and rewire. Unfortunately no bells were included.

I will update you further as the construction progresses.

Again, thanks for all the hints and construction instructions. 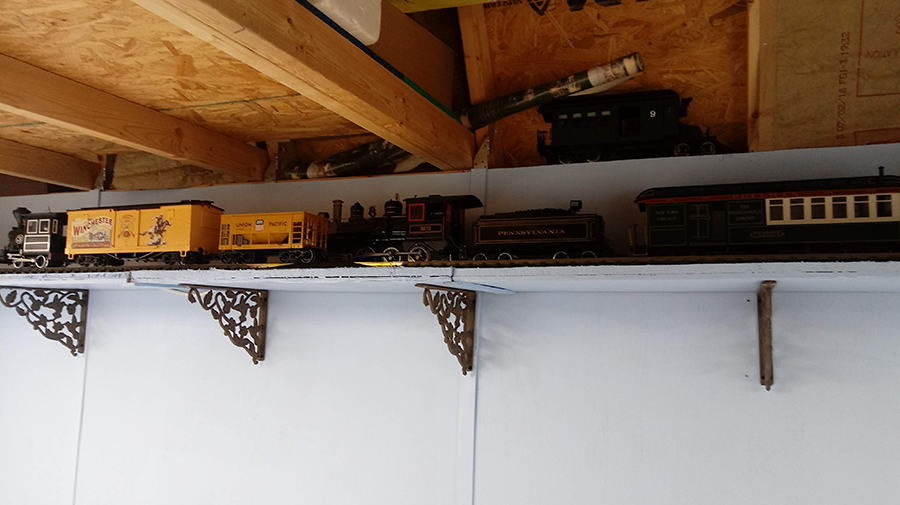 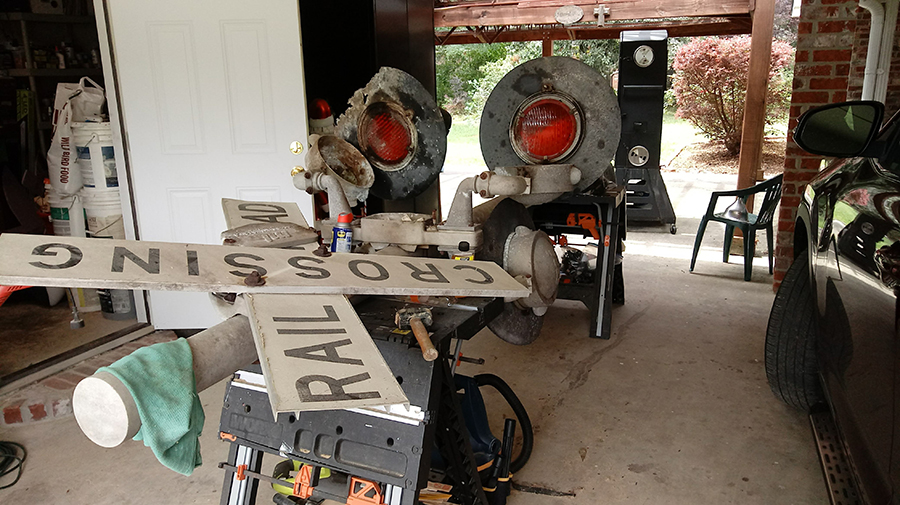 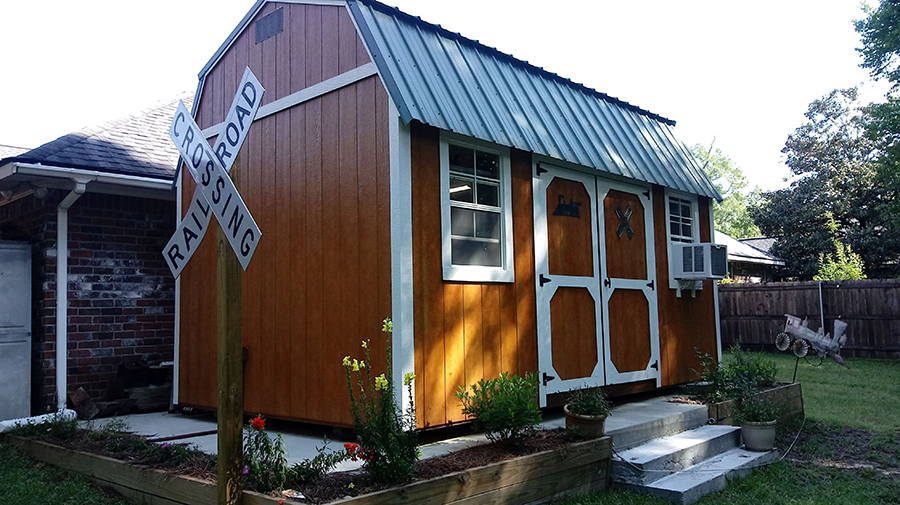 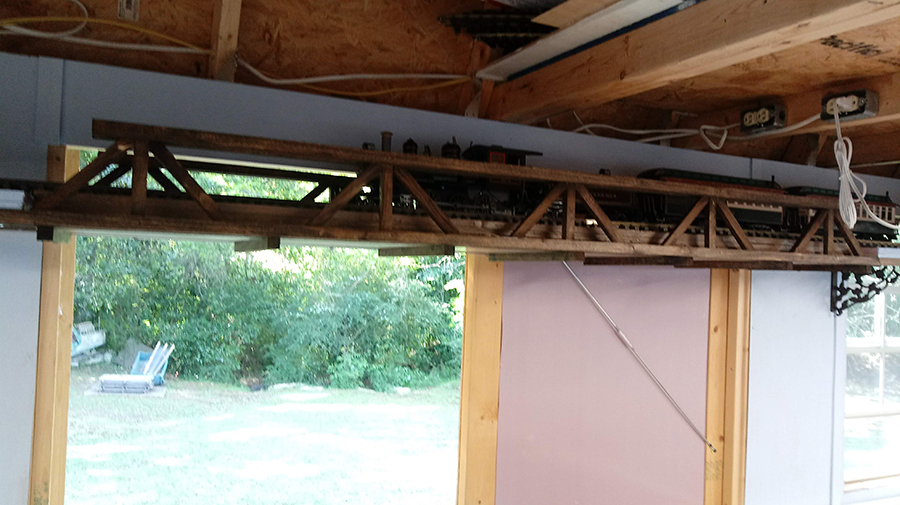 I know I’ve said it before, but even after all these years of the blog, I still love the diversity of what lands in my inbox.

A big thanks to Gerry and Doug.

And if you want to get going – just like Doug – the Beginner’s Guide is here.