Bob’s been in touch with is G scale Christmas train:

“﻿This time of year my thoughts turn to my outdoor G scale Christmas display that I set up for 35 years. It all started about 40 years ago.

My son Keith was about 14; he worked in TrainWorld Brooklyn. My wife and I went next door for a Christmas Eve toast. When we got home, Keith had an LGB starter set running around the living room and dining room.

He said Merry Christmas Dad, the set is yours! That Christmas we set the set up in the back yard. It wasn’t much, just the track. We lived in a row house that didn’t have a basement; which is why the 0 Gauge was packed away. The front garden was a rock garden. The following Christmas I negotiated to use the front garden.

I purchased used LGB track and proceeded to construct a railway snaking between the rocks and plants in an oval at basically the outer edge of the garden.

I used the brick wall as my roadbed for one side.

I bought a church and a house at a show; they were very light and had to be wedged between rocks to keep them from blowing away.

A few years later a friend was breaking down his layout and offered all of the buildings to me. They were all the premium heavier buildings; including the church, station, water tank, hotel, and saloon.

I started mounting the track on 1x3s and then only had to make track connections at the corners. The next year another friend came upon a deal of LGB engines. He passed on the savings to me and I picked up the Colorado Southern, and a smaller American engine that also had a powered tender as well as a trolley.

I set up a track that ran up the middle of the garden and then curved to meet the “Main Line” at the station. I purchased a reversing circuit, so the trolley travelled back and forth laying over at each end for a few minutes.

I picked up some American passenger cars and began favoring the little #2 and 2 passenger cars less and less. Then one day my Dad stopped over and when He saw the number 2; he told me that he rode on that engine as a boy. He said that his Grandfather was the engineer in a factory in Germany. That’s when I knew that #2 would be part of the Christmas display for a long time.

I had picked up some American style passenger cars to run with the Colorado Southern. I soon learned that the tight turns and slight grade from the front of the garden up to the house was too much and the engine was slipping. I eventually traded the passenger cars.

I started the routine of trying to find a different 4 wheeled passenger car every time I went to York.

Other cars that were added along the way included; a high sided gondola which I stood Christmas trees in, an REA heavyweight combination car, a gondola with Santa in his sleigh, a work caboose with gifts, and a Christmas caboose. Of course the weight issue returned so the little #2 was added on the end as a pusher.

The CS had a bell/whistle feature that was activated by magnets in the track. My wife objected to this because she thought it would annoy the neighbors. I took apart a floor toy that had a nice sounding sound system.

I mounted the small circuit in a plastic box that screws came in and attached it to the wrought iron fence at the walk. I connected it to mini speakers from a tape player. When people came by I told them to ring the bell and blow the whistle. I had quite a lot of traffic in front of our home during the Christmas season.

I settled into a routine from year to year. I reached an agreement with my Wife that I could have the garden starting the last weekend in November or first frost which ever came first; and my wife wouldn’t plant any perennials in my right of way.

So starting a few weeks before Christmas I would run the #2 passenger train, which grew into an 11 car train, until a few days before Christmas. Then the Christmas train ran until New Years; followed by a logging train headed up by a Bachmann Shay.

The G scale Christmas train flatcars became log cars. One year I had a business trip at the end of January. The trains were in; but the track was still down. There was a snow & ice storm that froze the track to the ground until late March. This resulted in an amendment to the agreement. The track would be removed by January 6.

Most times the trains ran in the evening till 11 PM during the week, and 12 -14 hours a day on the W/E. The last 3 years of my work were at home except when I was travelling. So the trains would run from lunchtime till 11 PM.

My home office was in a rear BR; so I had a camera positioned at the front BR window looking down on the garden. It was hooked up to a 5” TV on my desk.

It took about a minute for the train to make a full circuit; so I would glance at the TV every so often. If I saw the train I was good, if I didn’t I’d wait the minute for it to appear. When it didn’t I would go down and check it out.

It amazed me that some days it would run 12 hours without a fault and others were a disaster. I soon learned that the LGB hook and loop couplers were very finicky. Depending on the strength of the plastic centering spring it made a difference which hook was on the left and which was on the right. Set up the wrong way and one car would derail the other on a curve.

The trains ran in all kinds of weather; although there would be changes in the consist depending on the weather. A really windy day would sometimes reduce service to a lone trolley car running on the mainline. Snow wasn’t a problem unless it was wet and heavy. I would add an engine to keep them running.

Sometimes it would be a lashup of 3 engines just to keep the line open; all the while hoping that the snow would stop before 11 PM.

Freezing rain was a killer; a glaze would stick to the track and that halted everything. There were times I would try to fight it by using an alcohol sprayer. Sometimes I won.

The snow would take over when I shut down for the night; I had a wedge snow plow mounted on a gondola. I put a brick in the gondola so it wouldn’t derail when it hit a drift.

It all came to an end a year or two before we moved to NJ. There was snow an ice in the garden and there was a derailment at about 9PM. I gingerly tiptoed around the rocks and got it cleared; all the while thinking, if I fall how will I ever get up.

When I got back inside and settled in my chair; I texted the kids and told them that they had to pick up the G scale after Christmas or it would be sold. End of an era.

Three days after we moved into our new home; I was invited to join a group that was forming to put a Christmas layout in the community clubhouse. But that’s a story for another day. 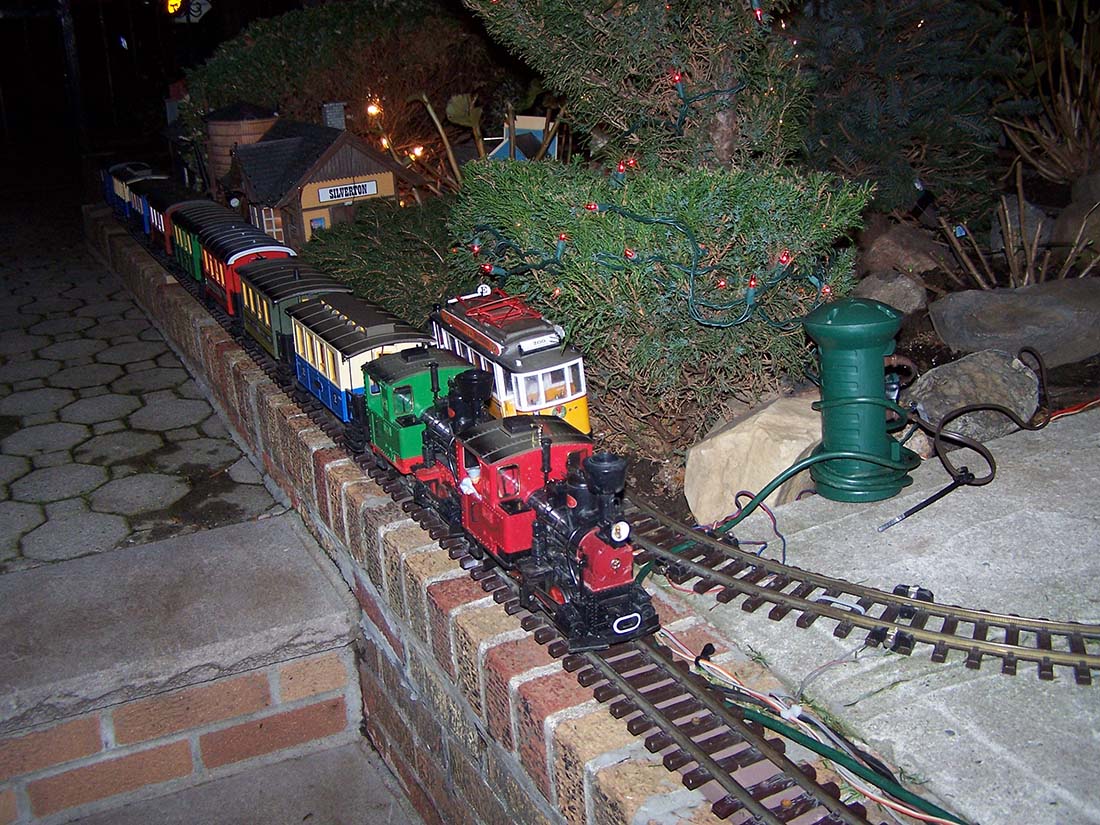 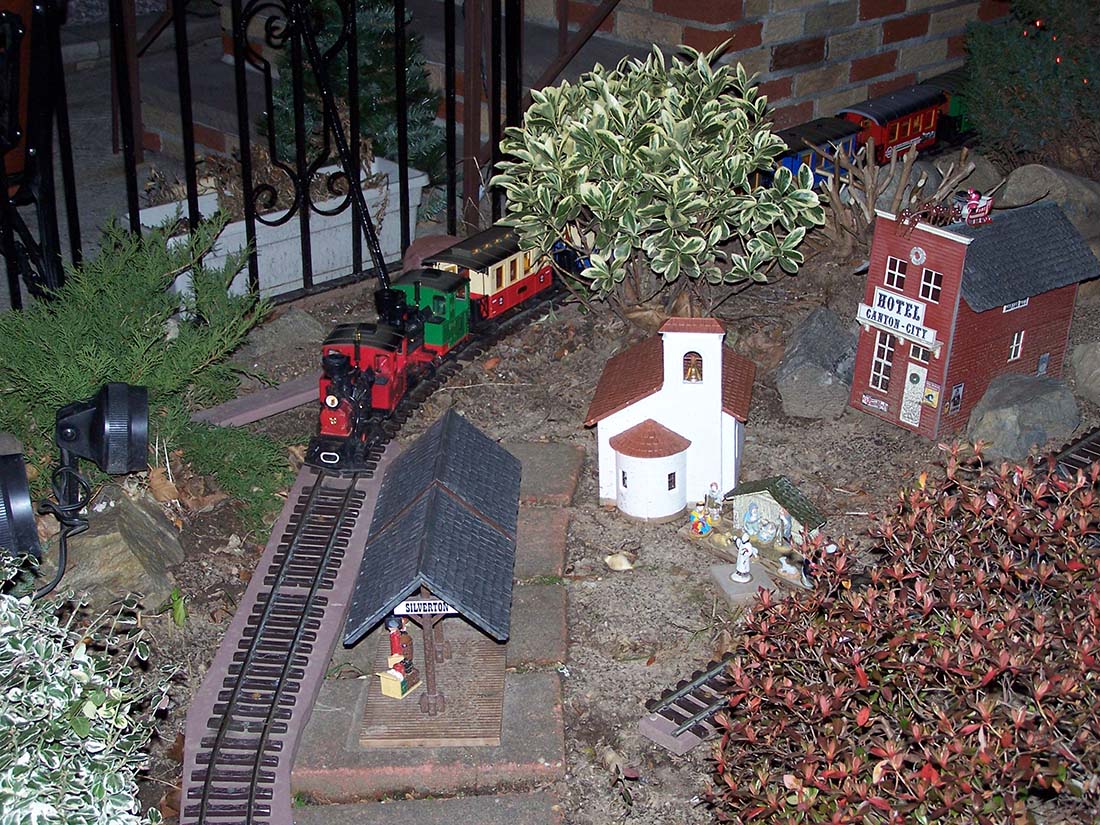 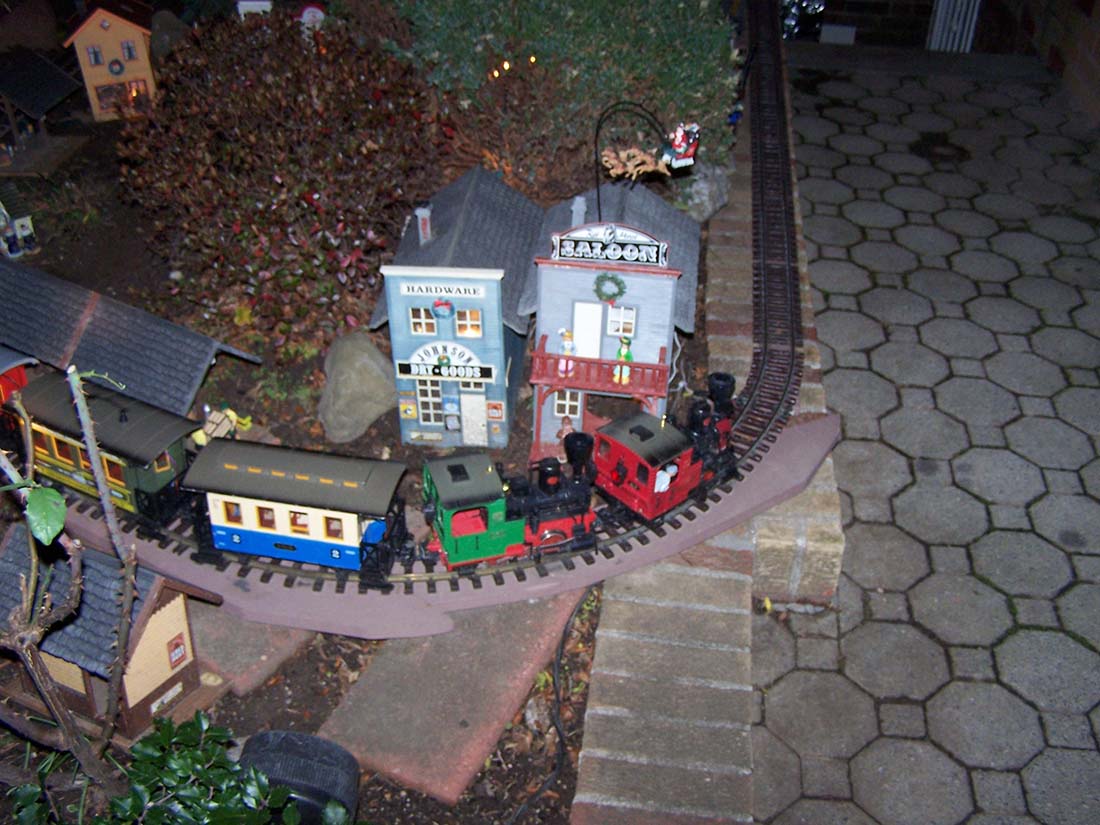 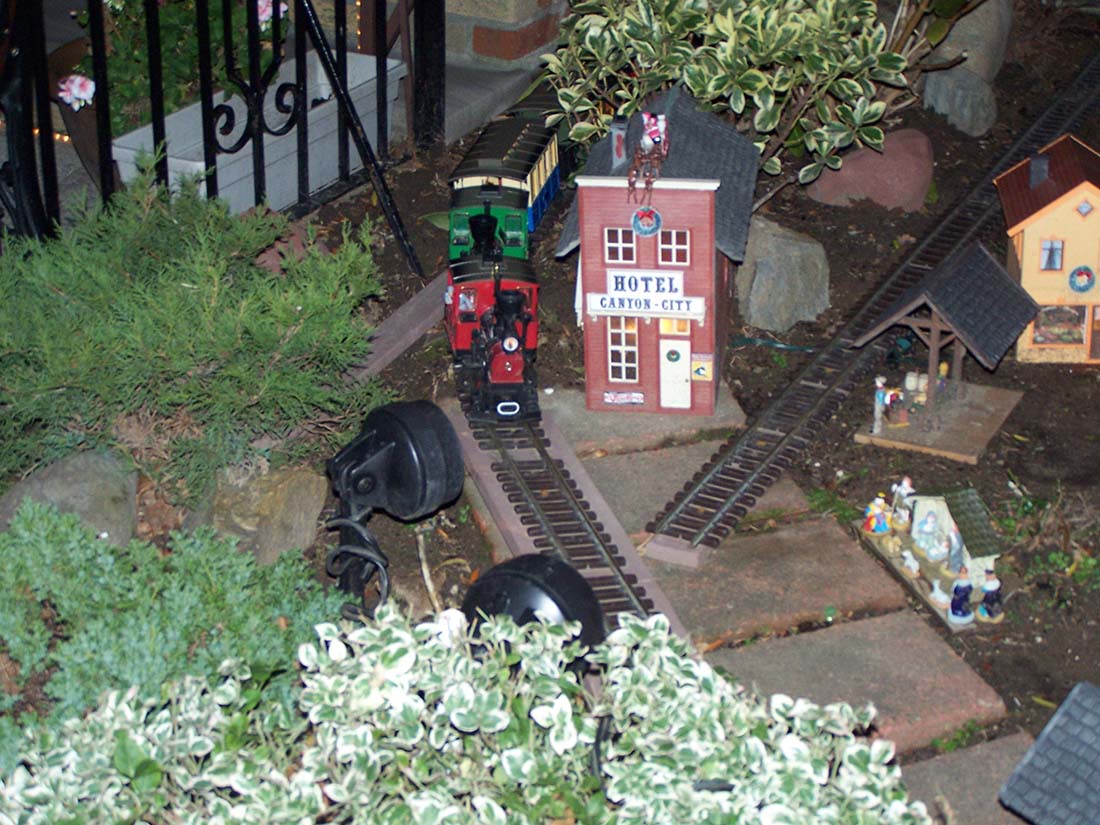 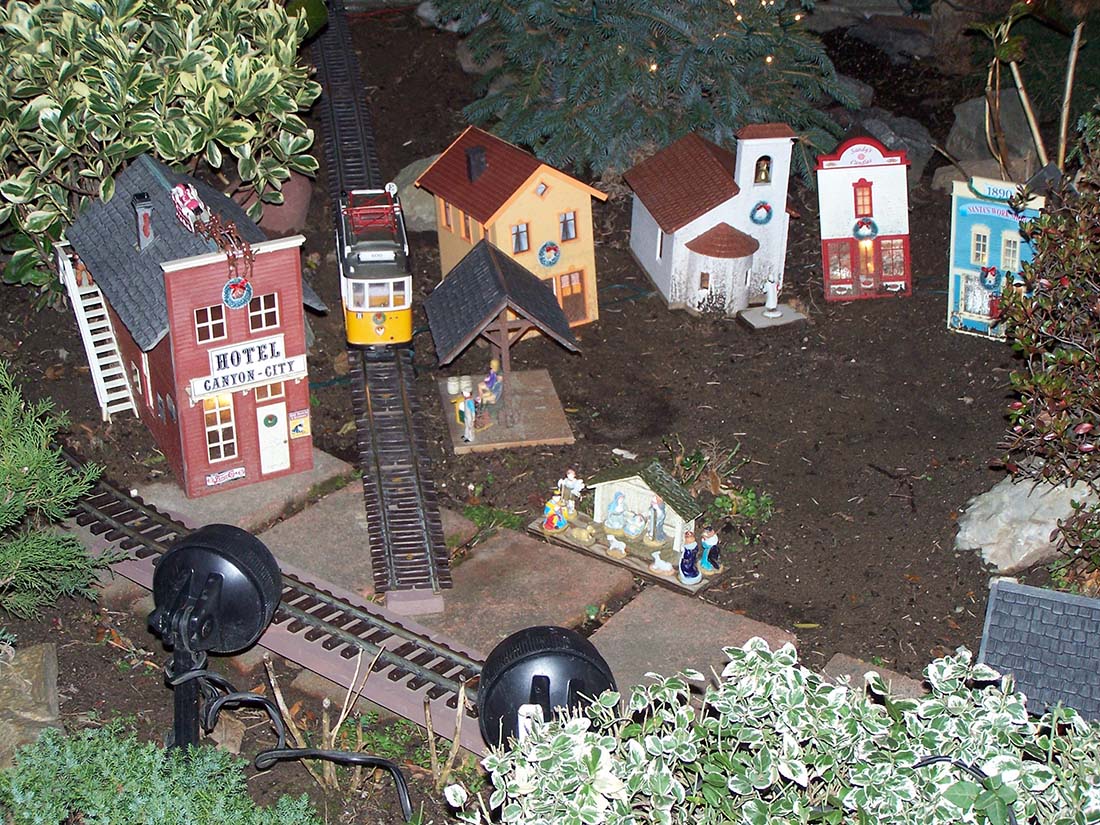 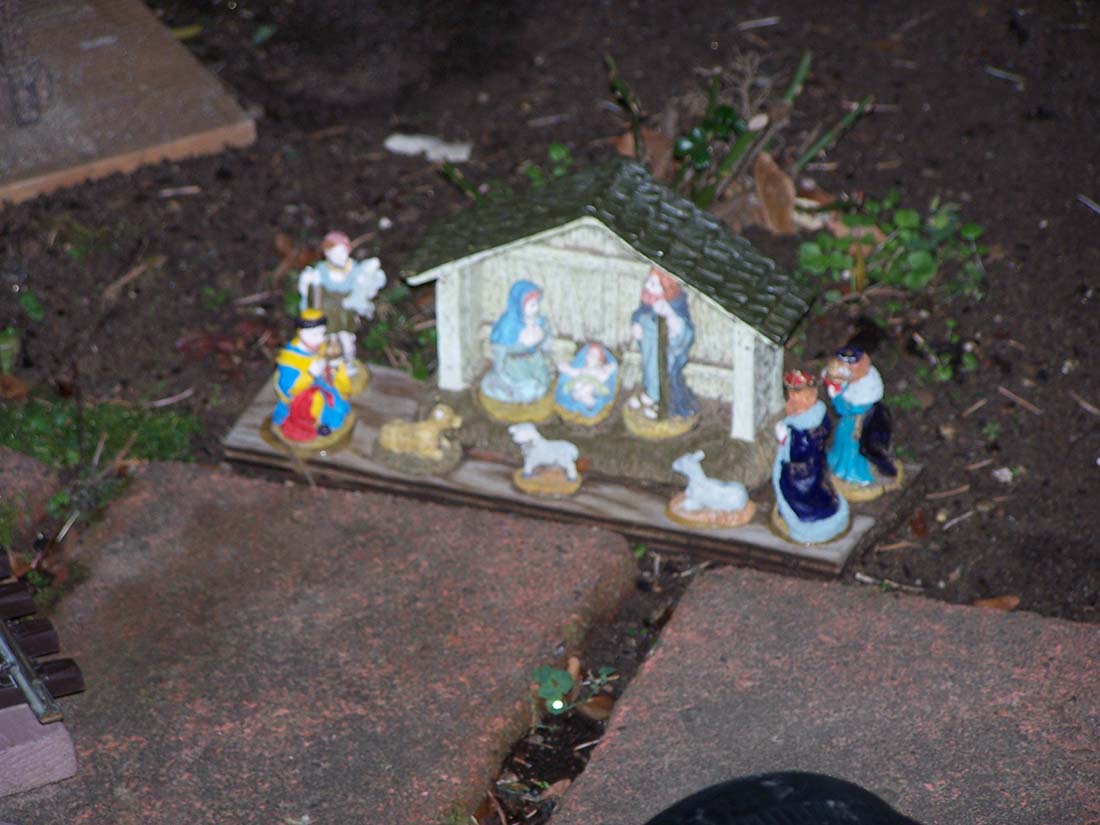 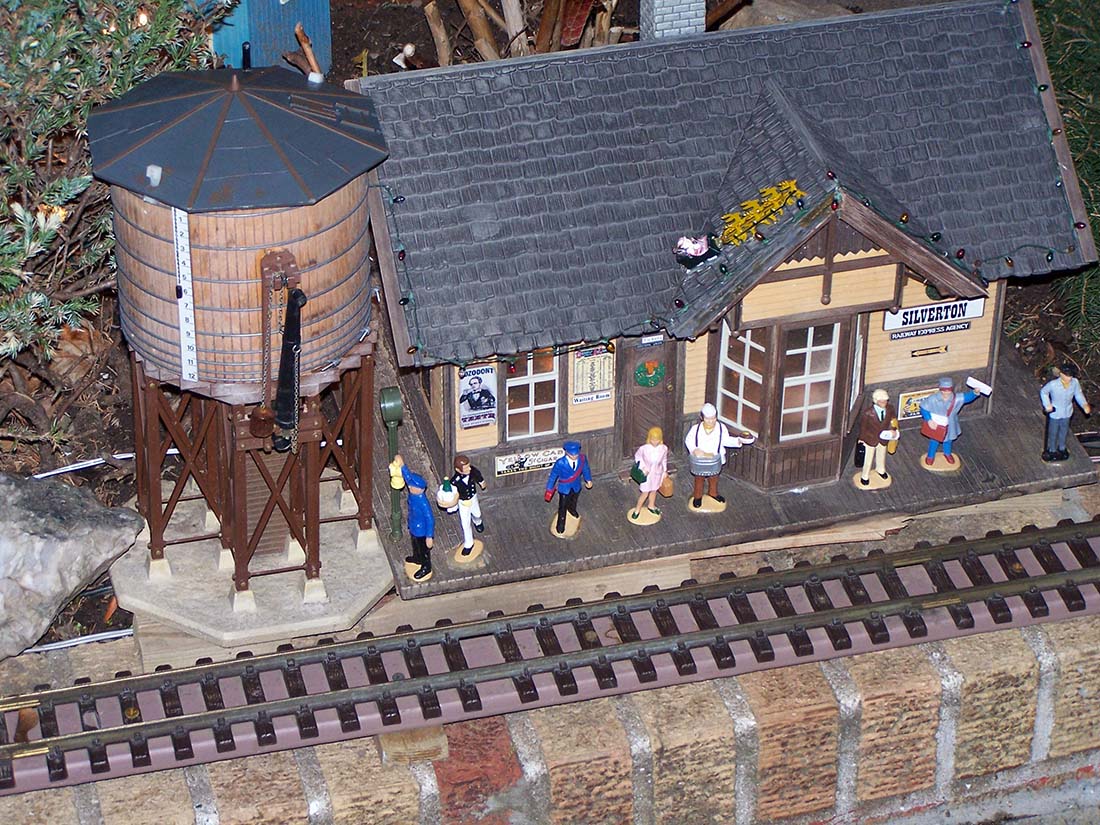 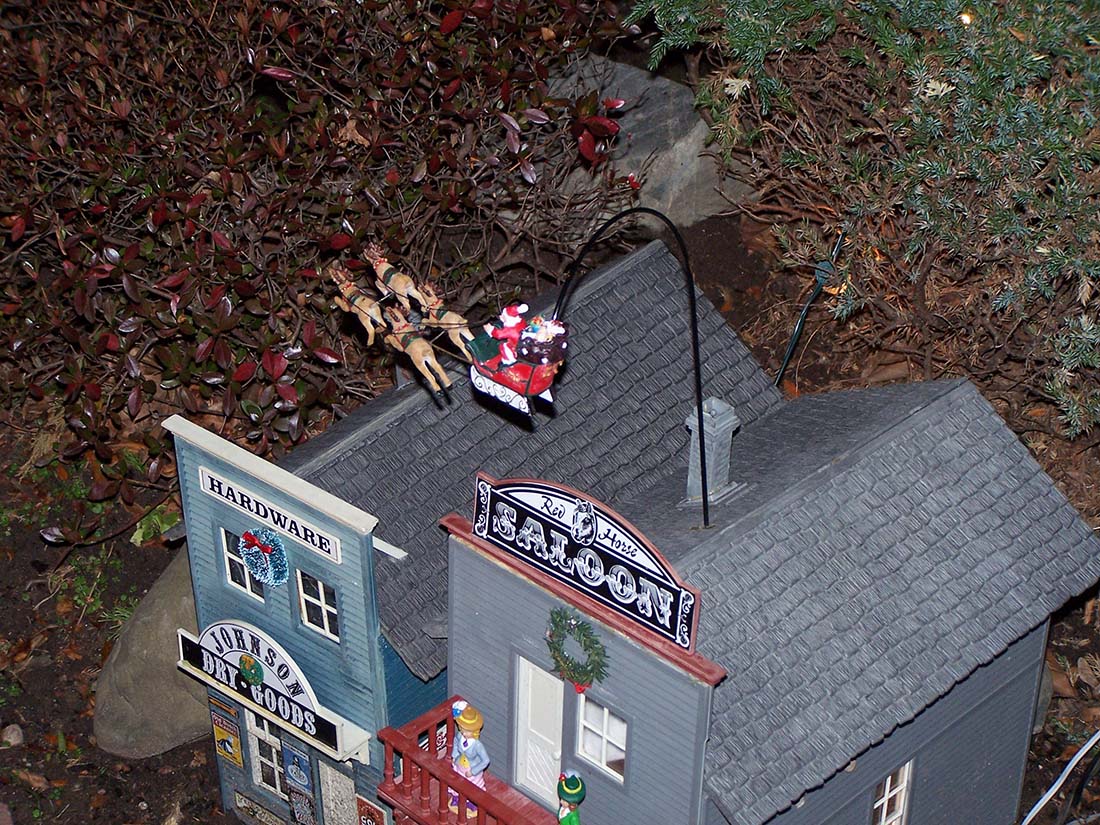 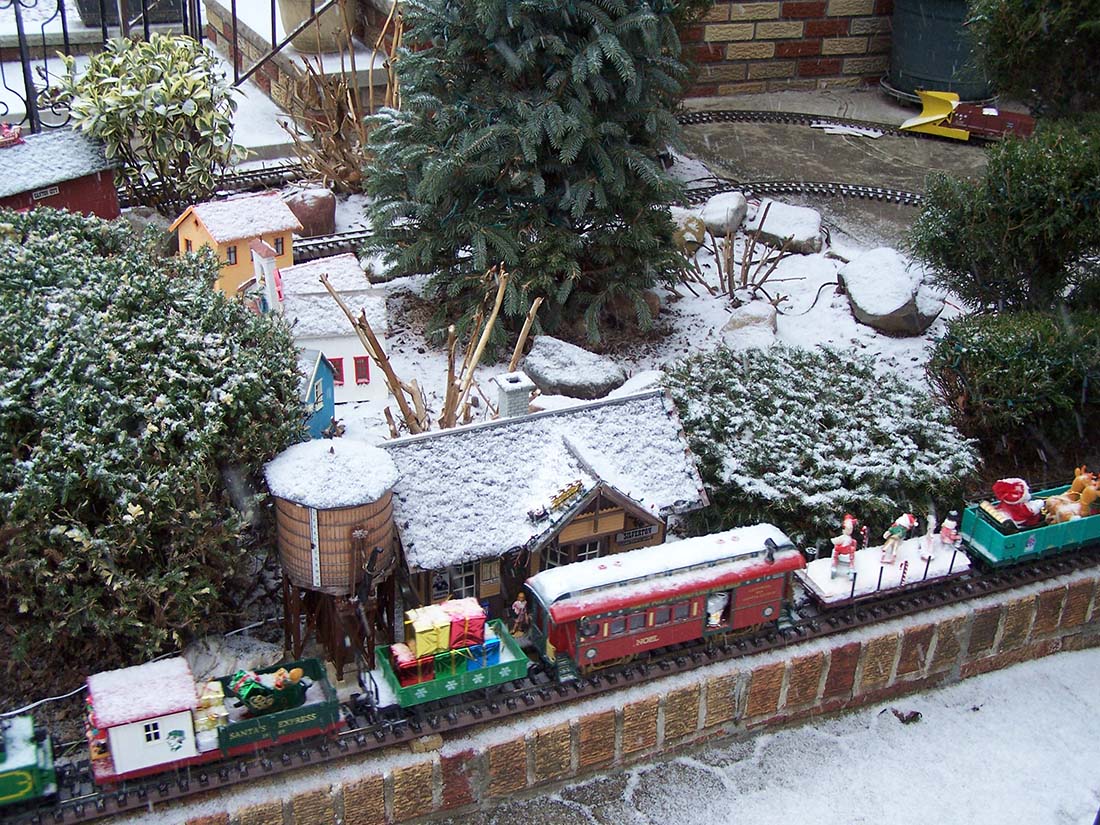 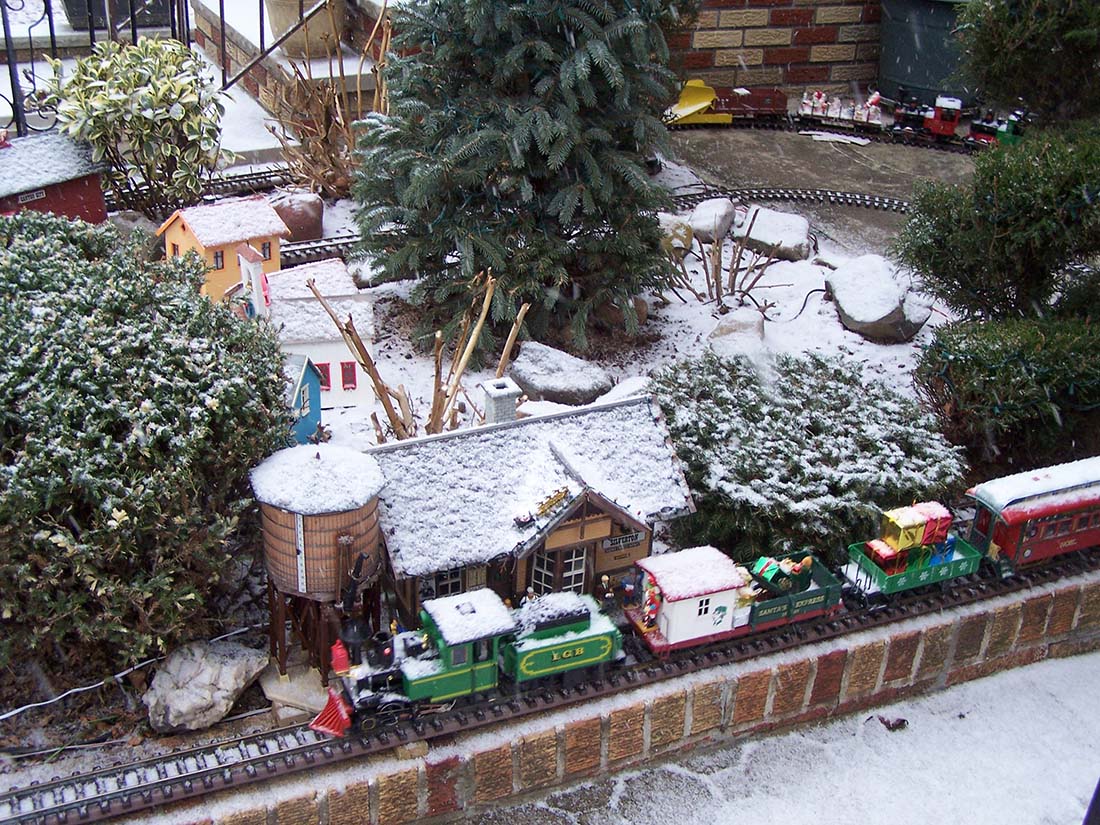 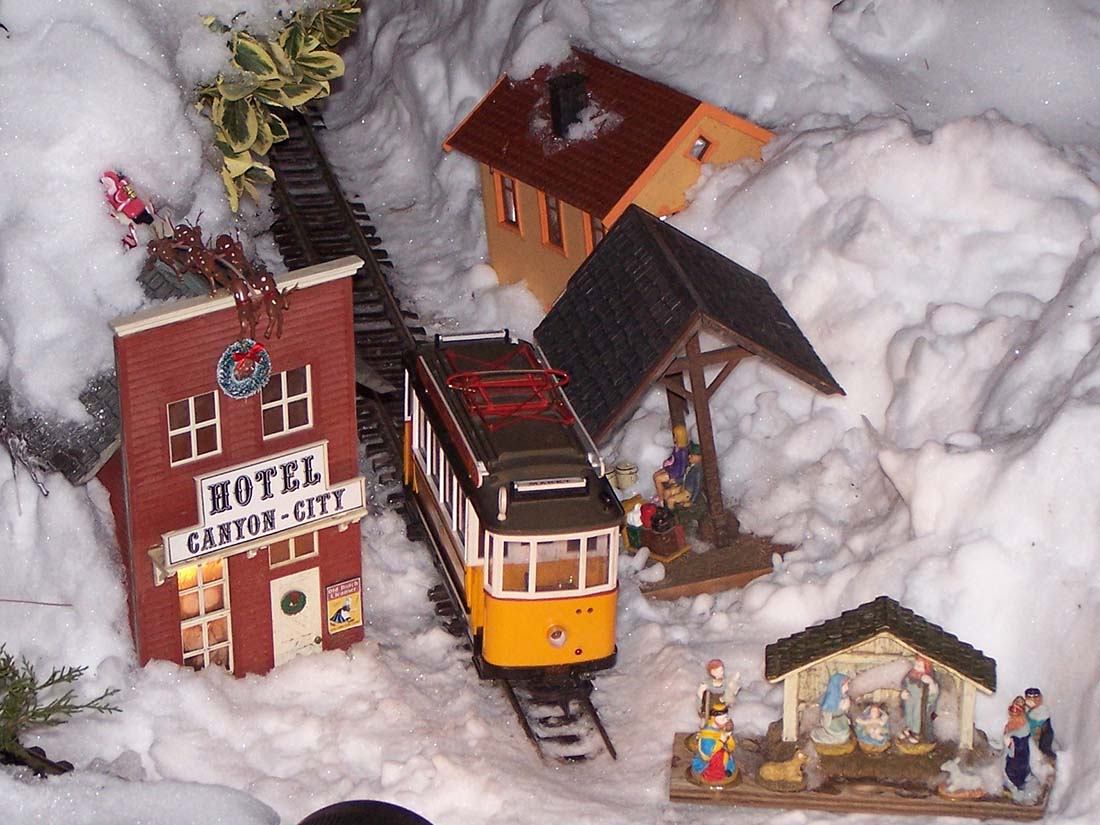 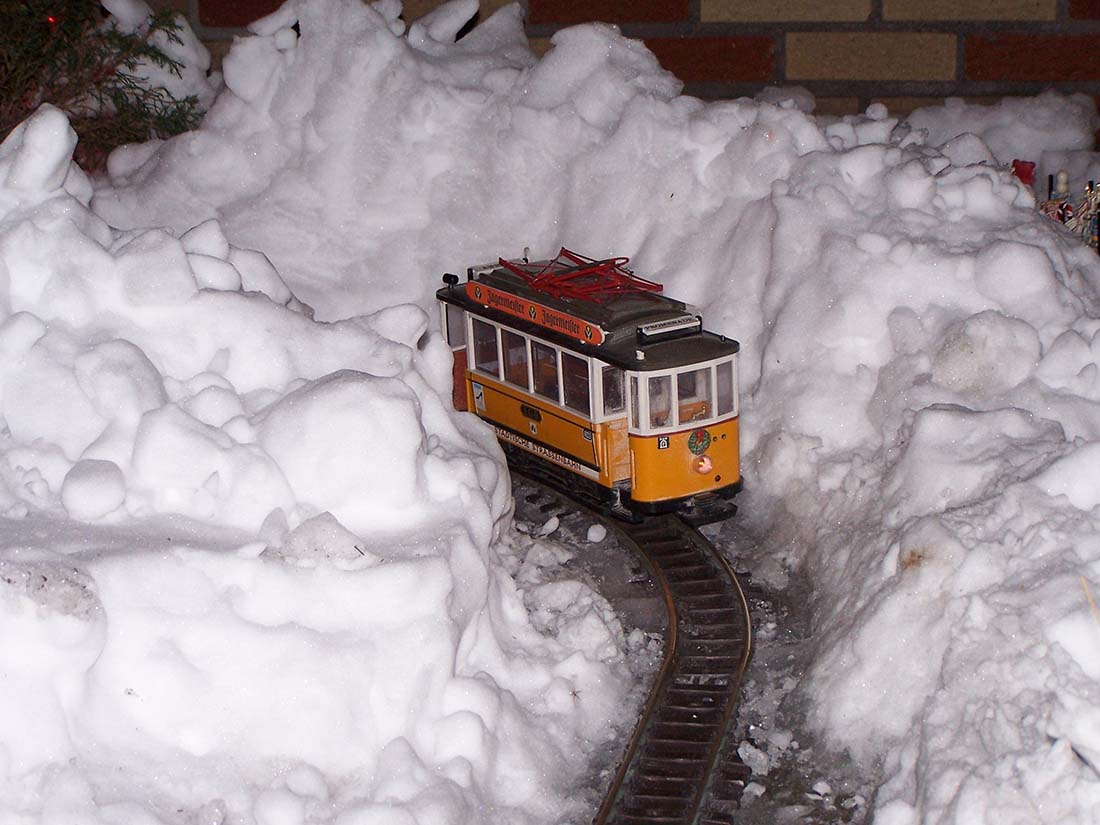 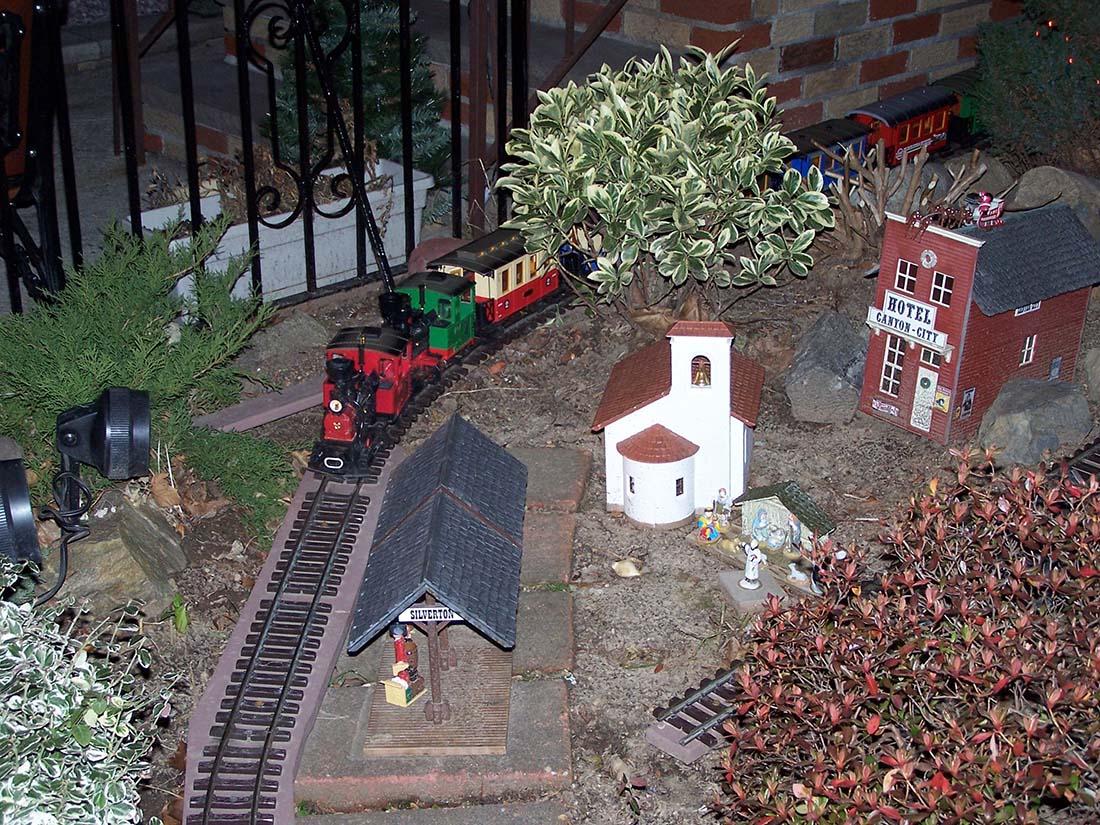 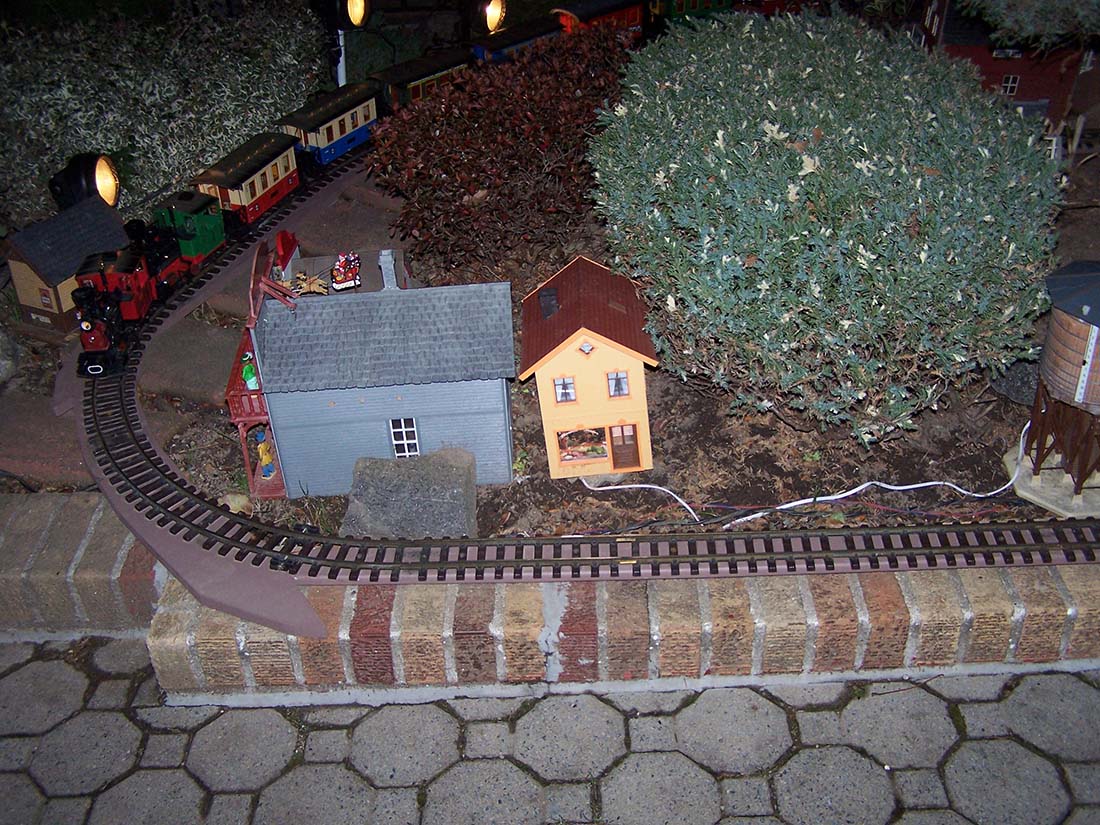 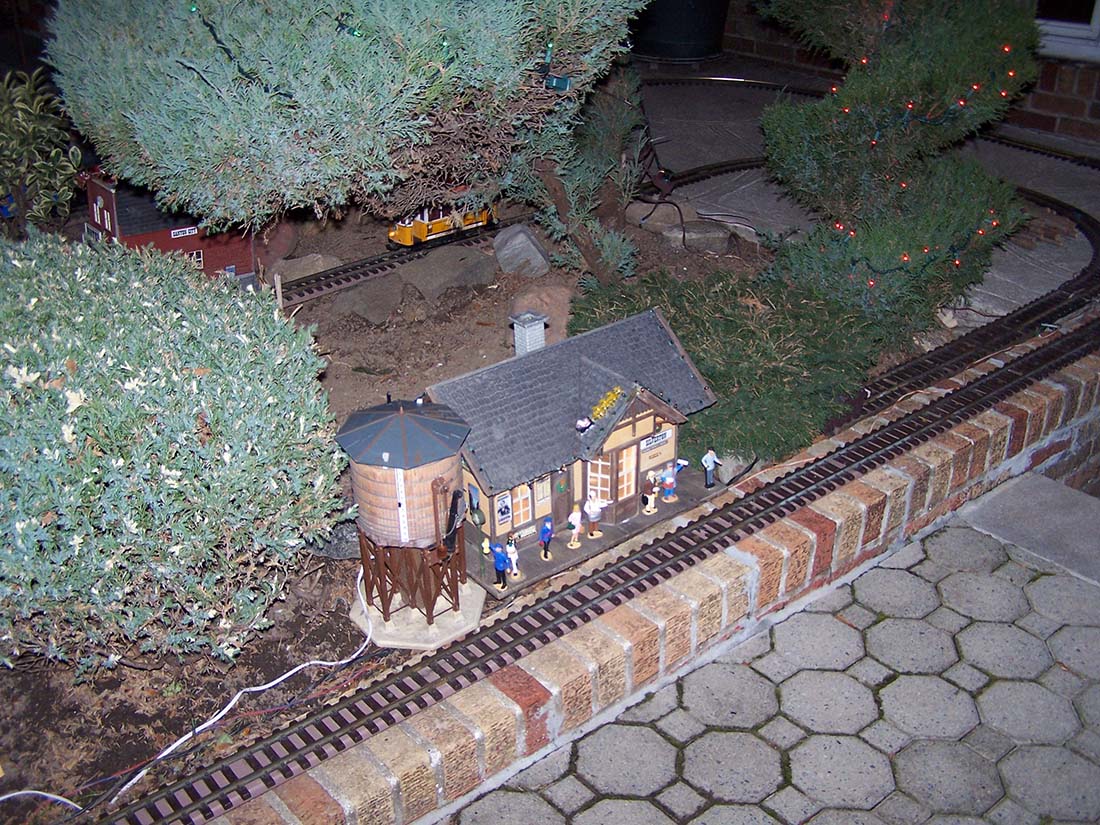 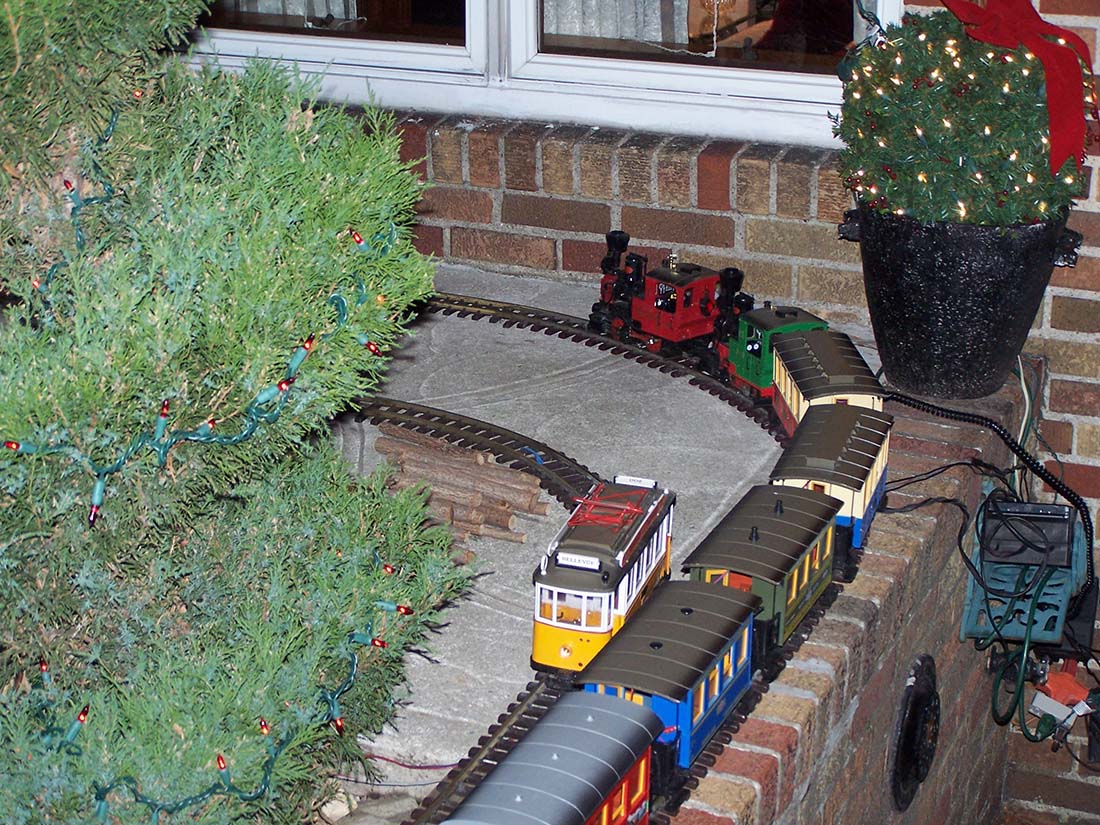 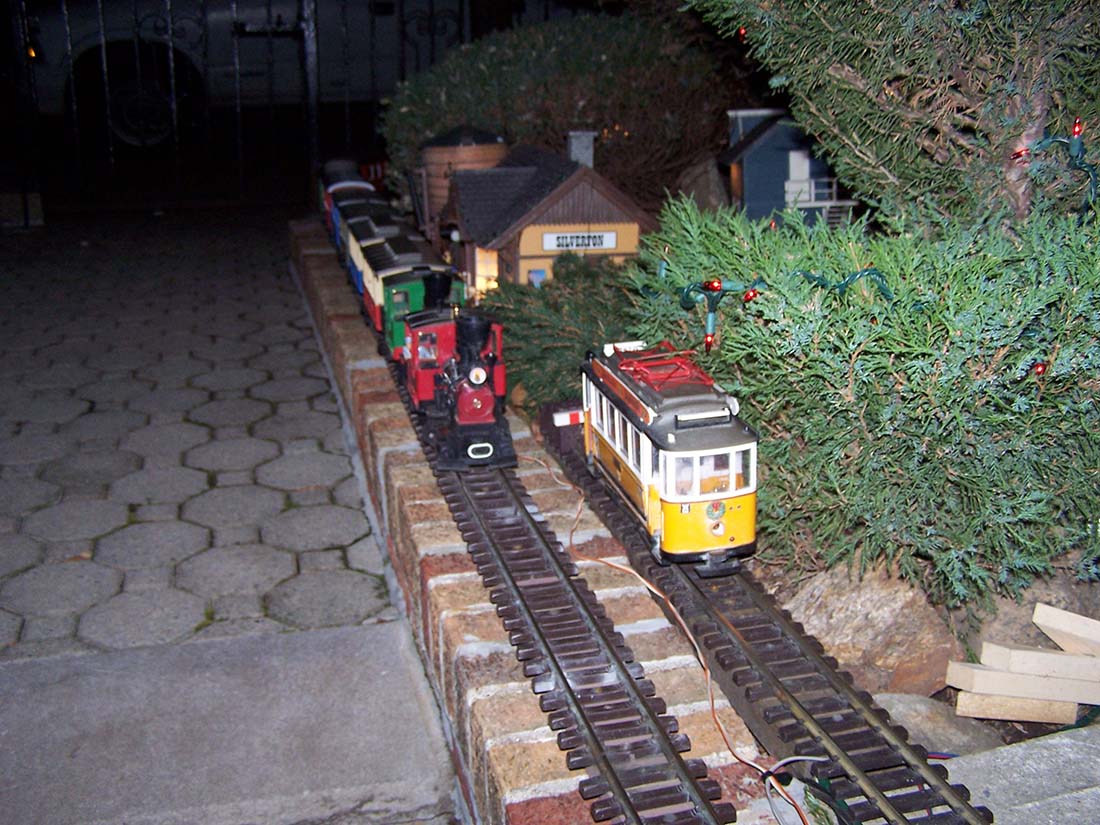 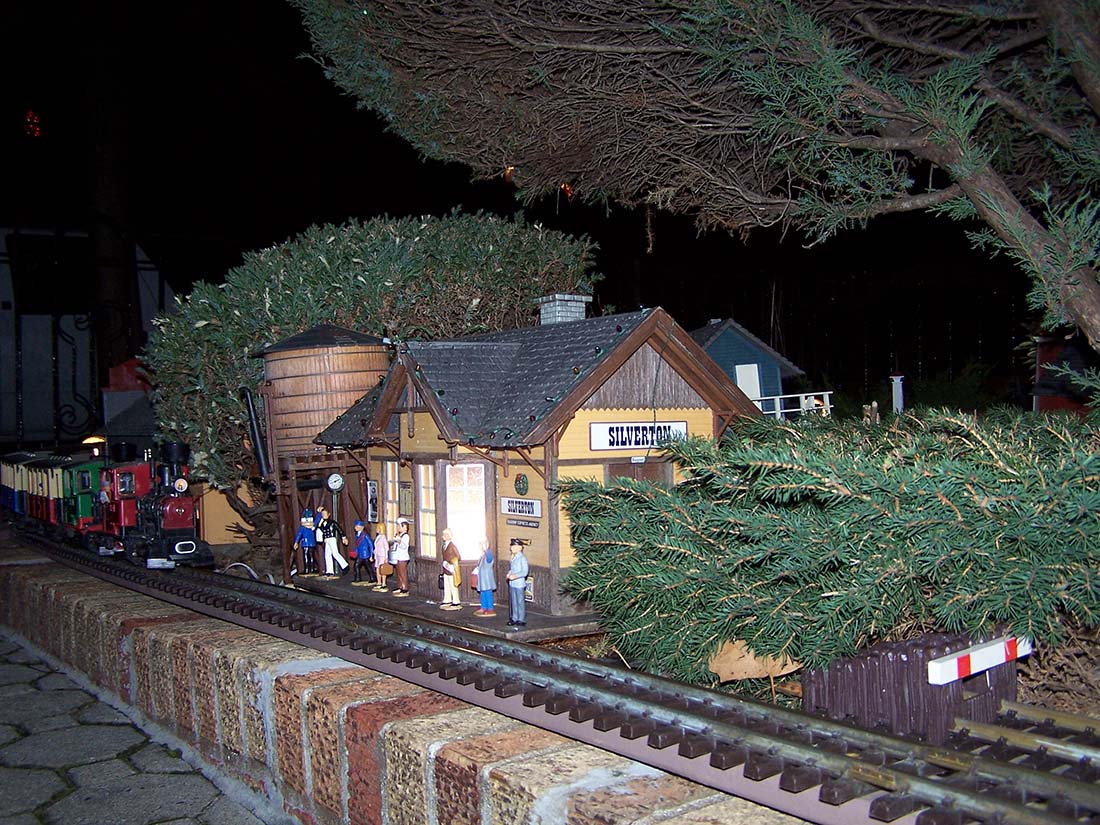 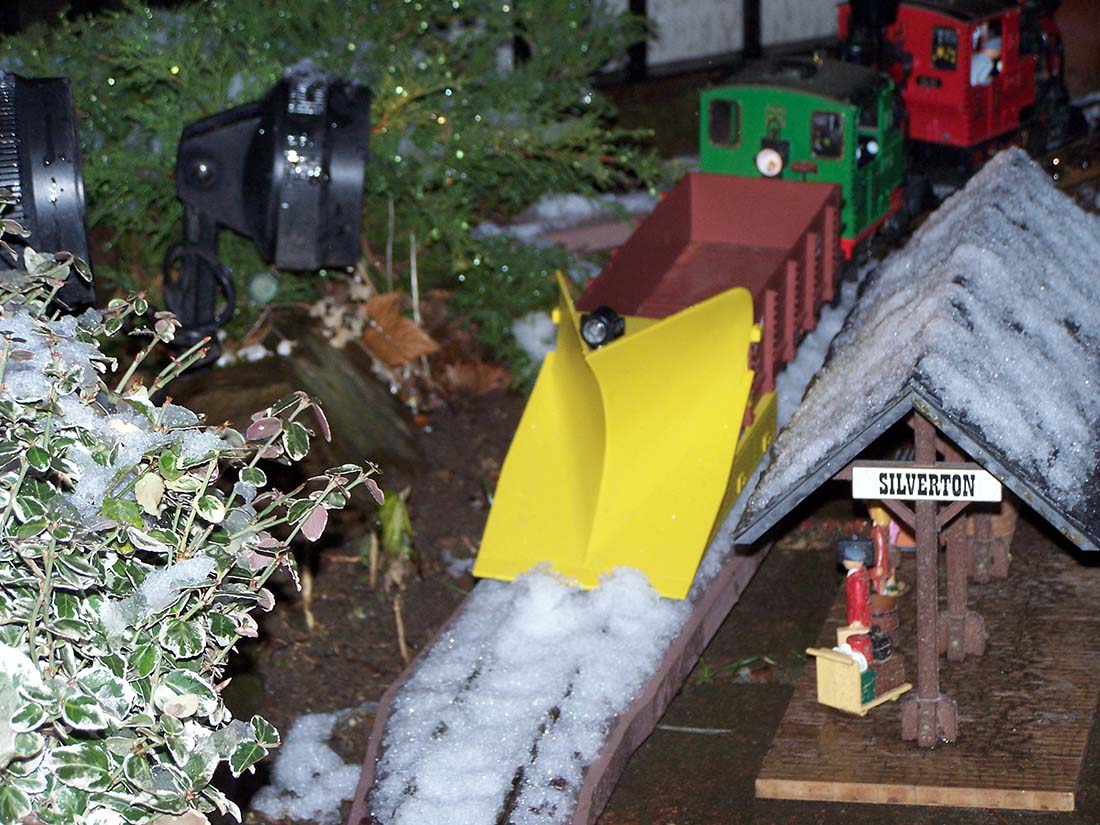 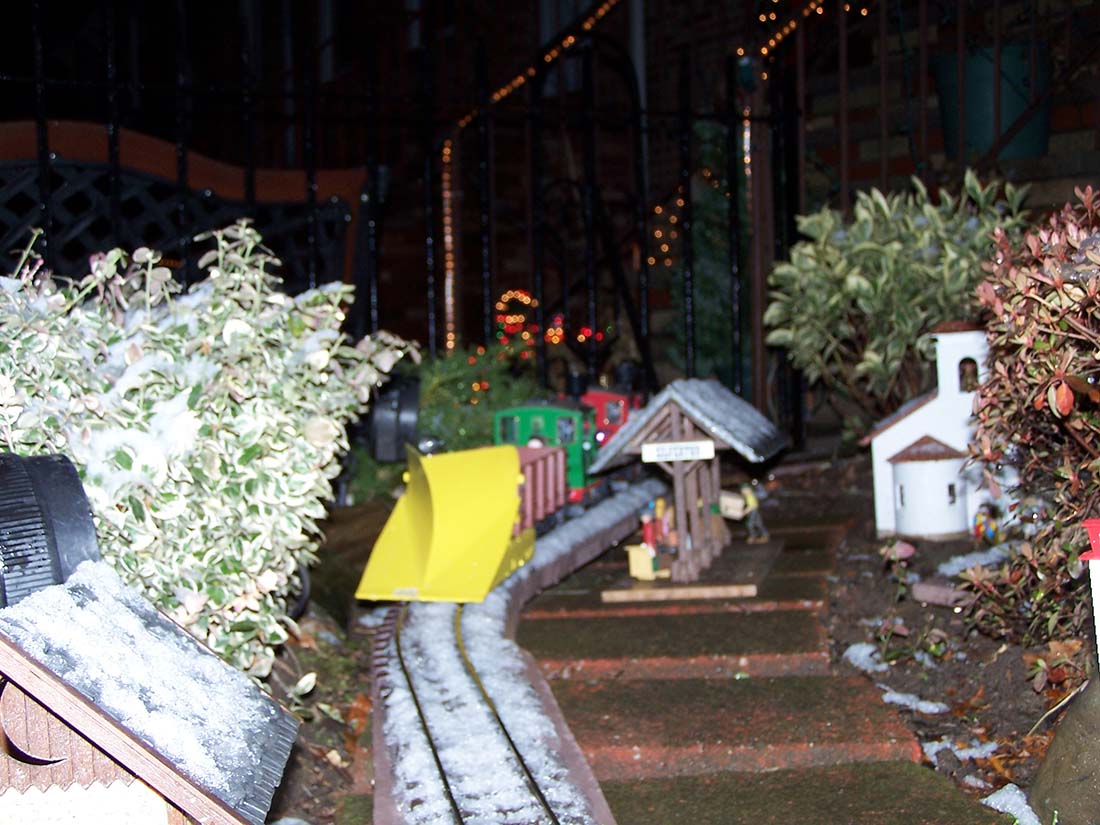 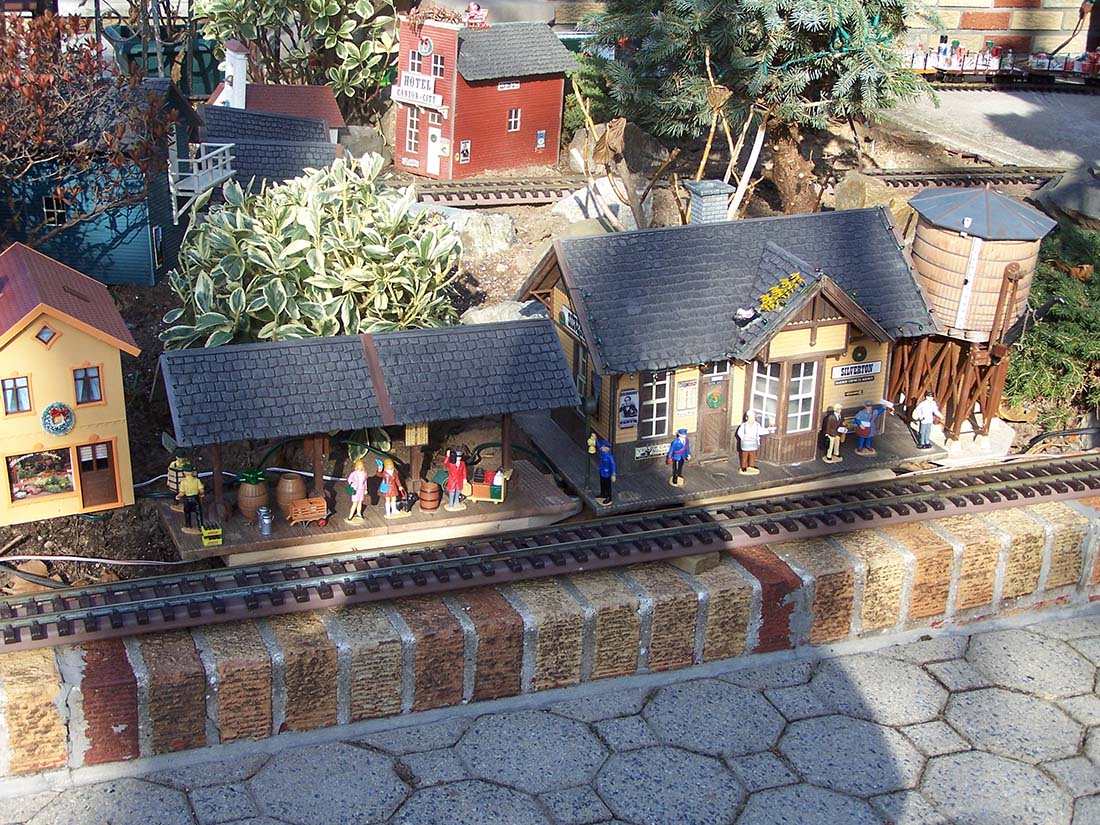 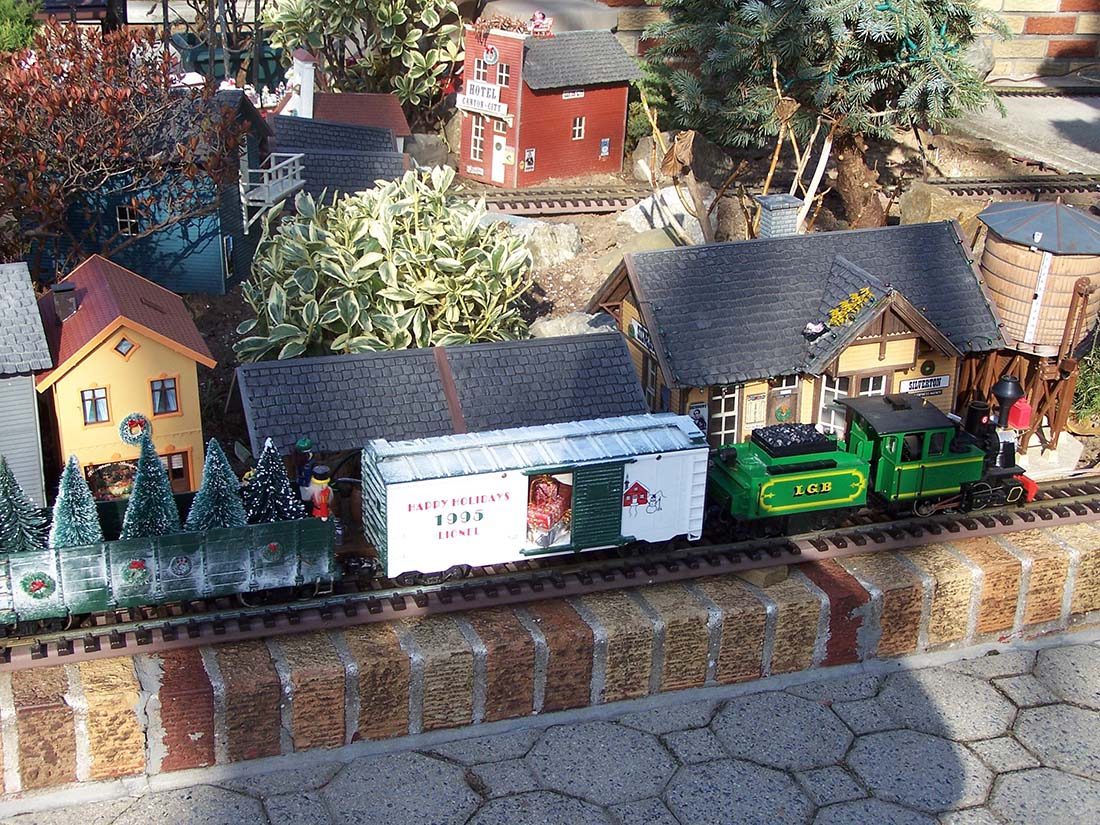 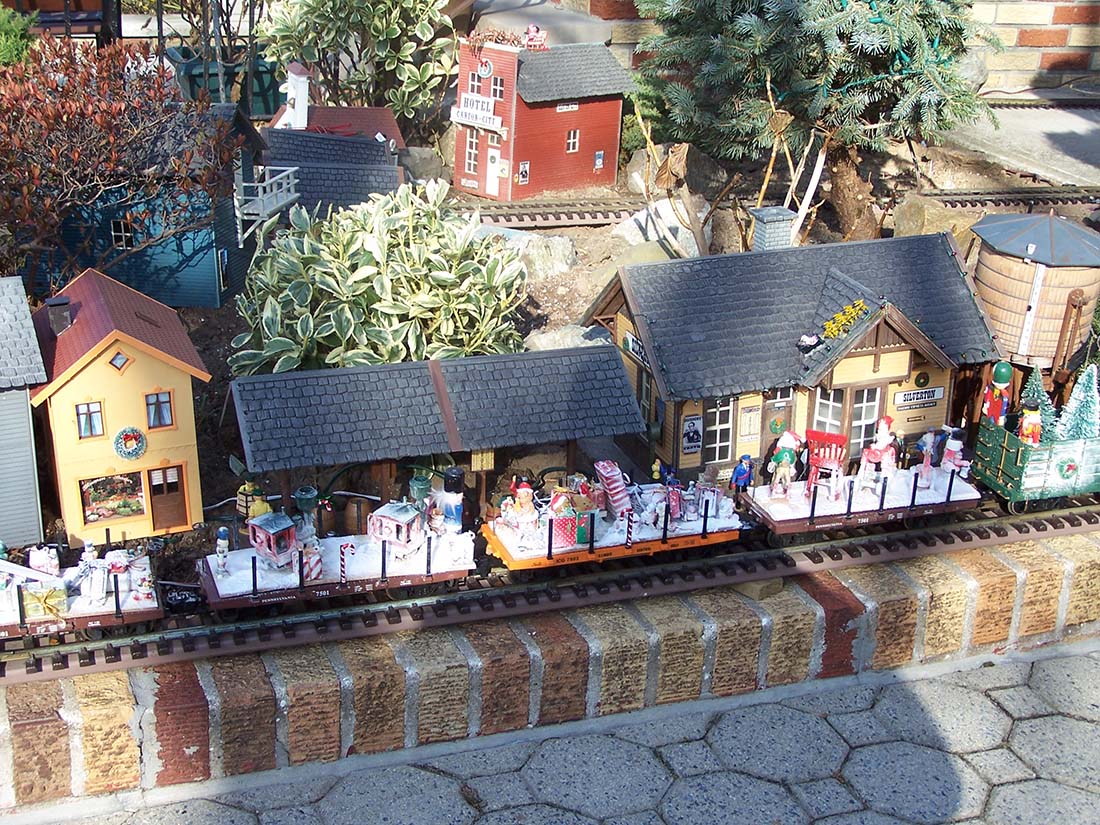 A huge thanks to Bob for taking the time to write this with the pics and video and share his G scale Christmas train.

The Christmas posts really do show how much this hobby spreads to the rest of the family. Suppose it has to when it’s taking up the garden or the front room…