Tom shows us how to plan your railroad at the bottom – but first we’re going to start with Gregg.

Unfortunately the pics don’t enlarge, but he looks like he’s been having lots of fun with his son:

“Here are a few pictures of our model train with mountains from plaster paris, that i was telling you about.

The boats are made out of tooth picks for the sides and the bottom of them are made from corn dog stick’s.

I glued two tooth pick’s together and after the glue dried i cut a slit in the tooth picks so that they would bend for the bow of the boat. I then sanded them and they look like a solid peace of wood. The trolling motors was dun with one tooth pick for the handle and the motor part was made from the rounded part of a corn dog stick i just sanded them down to size and shaped them to look like a motor.

One thing i will never do again is purchase n scale people again non painted. I could not purchase the people in the poses i wanted so i got what they had and my son told me how he wanted them to stand and what he wanted them to do for the areas of the model that they was in. I got out my soldering gun that i can turn down the heat with out melting them and i had a tip that go’s to a fine point that way i was able to make only one part of a arm or leg bend.

The base of the model is a 4×4 peace of plywood and i used Styrofoam to make the hills and the mountains from plaster paris, and the small hills.

The inclines for the roads i cut out a peace of cereal box and made ramps i then got them into place and coated them with Plaster of Paris.

I dried coffee for dirt. The gravel i purchased one bag of gravel for $4.00 at Mikel’s craft store and we blended that in with the dried coffee.

The lake is all Plaster of Paris we painted it to look like the bottom of a lake and then i cut out a peace of stretch plastic that i purchased from the grocery store and i mixed a lot of white paint with some light blue paint and we dry brushed the plastic with that so you can see through it and then we started at one side and glued the plastic down along the side with model glue as the
glue dried we stretched the plastic a little and glued another section we did that all the way around the out side area. Now when the boats go on that they will look like there in real water.

We plane to cut some of our figures in half and glue the onto the plastic so they will look like there swimming.
My son turned 10 years old just last month he has been very involved with all of this since we started. I really think he will stay with the model trains through out his life.

The buildings are paper we are using these for placement of the regular buildings that we will be using.

I hope you enjoy what we have dun so far. Making mountains from plaster paris is fun. 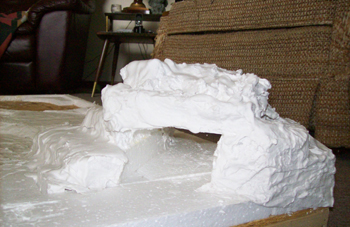 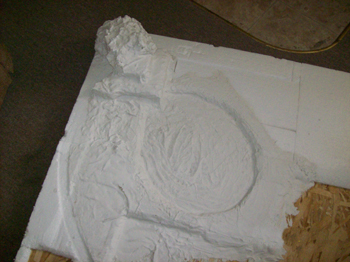 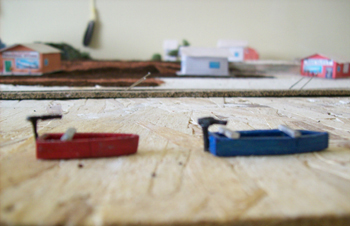 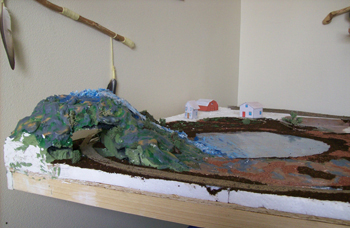 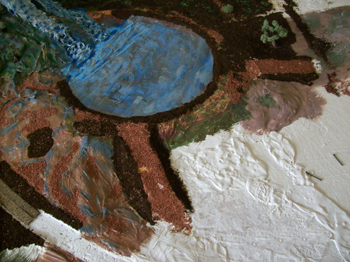 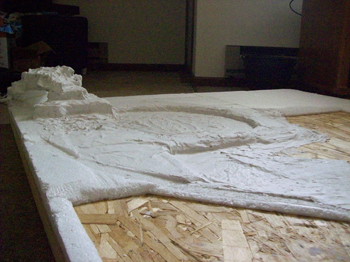 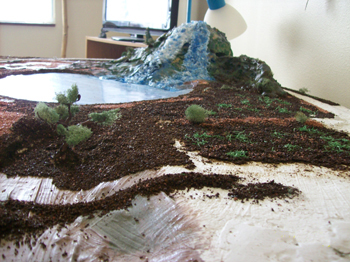 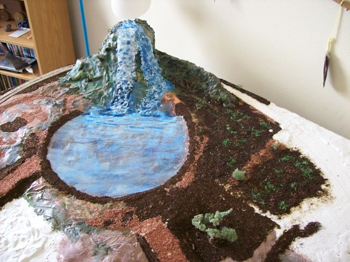 Now on to Tom.

He has a great tip and I thought I’d repost it because I know a lot of folk don’t want to design their layout on a computer.

Apologies to those who have seen it before…

“When planning the track layout for my railroad i made photocopies of a section of straight track and downloaded templates of the proper sized turnouts.

i then made made several copies of all this and had full size templates i could trim to size and even curve with just a few snips on the edges of straight pieces.

since my layout is only 24″ X80″ i taped together poster board to represent the full size of the layout and with my track templates was able to make sure my plan would work before i started spending money on track pieces.” 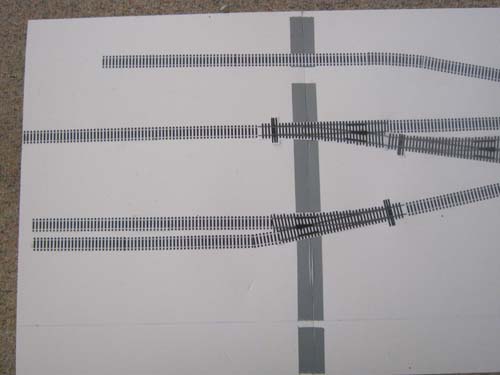 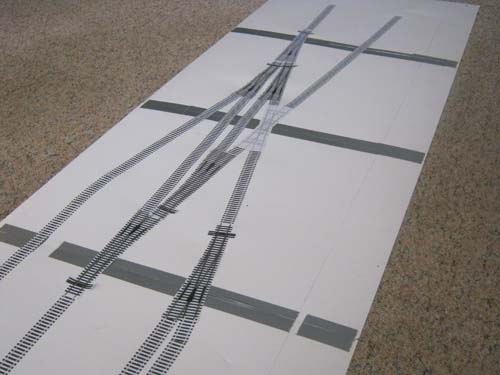 Thanks Tom, that’s a cracker!

I know there are many computer programs to plan your track, like Anyrail and Scarm, but if you are old school like me, this is a great – and cheap – way to plan your railroad layout.

I find the layout programs take a while to grasp, but once you have the hang of them, they are very good. Sharp learning curve though.

I love this simplicity of this idea – anyone can download the track images and print them out – then you are up and running. What’s more, you’ll see exactly how your track will look too.

And if you’re after more tips like this, you know where to find ’em.

Don’t forget the ebay cheat sheet. Things really starting to hot up there.

That’s all this time folks! Please do keep ’em coming.

47 Responses to Great way to plan your railroad layout