My name is Jim Volmer Sr. and I live in Buffalo New York, on the western side of the “big pond”.

I have been involved in model railroading most of my life. I started very young, age 5 with my first train from Lionel. Boy do I miss that train. When I was in College, I gave my train away. What a mistake that was, looking back on it now. But as they say, ‘can’t cry over spill milk’.

So after I got married, I decided to get back into the model railroad again. With a young son, I started to build my layout, in HO that I have had for over 32 years. My son is grown of course so now it is time to start a new layout.

I have included some pictures of the original layout to see what I did. 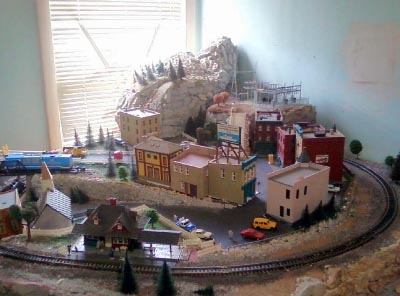 The Mountain in the background is so of light in the photograph. I built the mountain out of strip carboard and screen, over which I applied some joint compound that I had. It was applied very thin, over which I hand laid small outcroppings that I made using Hydocal. There are over 1,000 little stones on that mountain. It took several days to complete

The next picture is looking down the double track toward the mountain. There are several switches with Control signals wired into each switch, that control the movement of the trains. 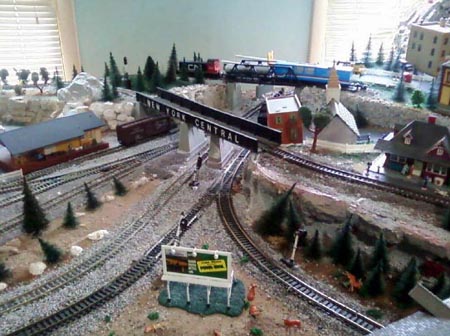 The next picture, shows one of four sidings that I have. This one is for the Cement factory. 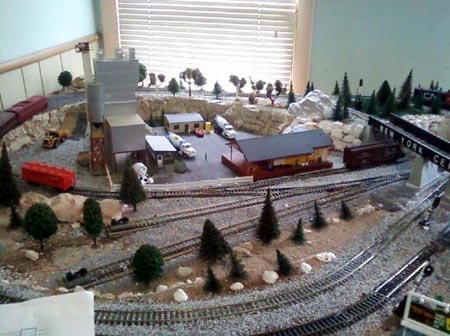 The last picture shows the Diesel Engine Facility. There are three buildings, Car Shop, Engine House, and Service shop. The Car Shop was accessed using a turntable. The Engine House and Service shop are accessed by a Transfer Table that I bought from Walters a few years ago. This section was an add on to the old Layout. 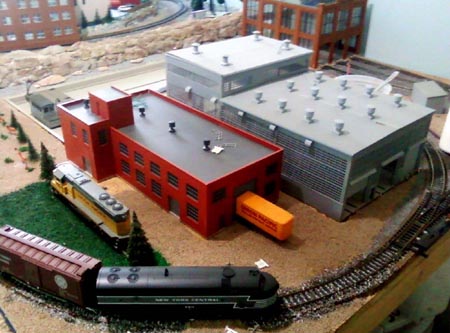 Now that this layout has come to its end, it is time for a new era in my railroad.

I have included a drawing for the new layout. It will be on backwards 7 design. 8 ft X 11. Does not sound impressive, but I think the drawing will speak for its self. 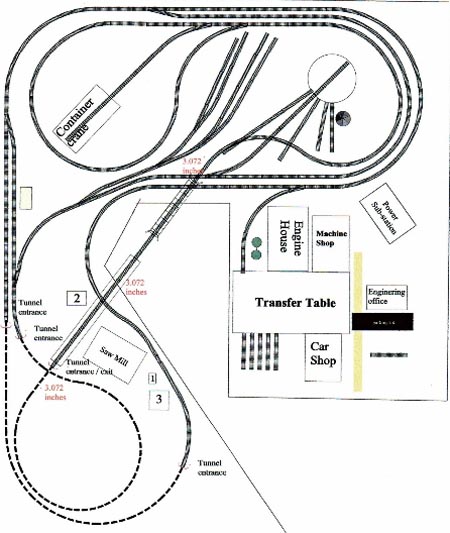 As you can see there are a lot of new ideas going into this layout that were missing from the old layout. The Mountain will have four portals: two on the lower level, and two for the upper level. The Second set of portals will lead the train up an incline to 3.072 inches ( grade incline of 2%) through the Mountain, exiting to a 3 Foot Bridge, followed by two girdle bridges down to a zero landing to a reversing loop that will allow the train access to the Container Terminal. All trains can reverse the loop back again travelling through a series of switches

As you will notice, there are two service areas, one for Diesel, and one for Steam.
There is also a logging camp with several buildings. The Saw Mill is noted. Buildings 1 ( Wood Chipper ) 2 ( Log de-barker ) and 3 (Truck Loader )

Next to the Steam Engine Facility is a small holding Yard.

Well there you have it. I would appreciate any comments from your readers.

And as always HAPPY RAILROADING.

The photos of the town scene were all taken with a Sony digital camera DSC-F707 model (about 9 years old and still going strong) with the f-stop set on F8, manual focus and an approximate exposure time of 30 seconds. Camera did all the work in adjusting the exposure.

The only lighting used in all of the photos was the street lights on the sidewalk. (except the daytime photo).

This town scene is only four foot six inches long by one foot wide.

All the products used here are from the Woodland Scenic range.

All the best – Brian” 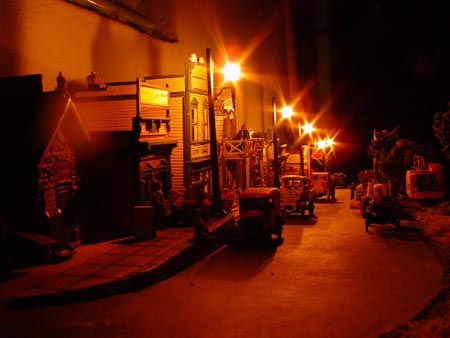 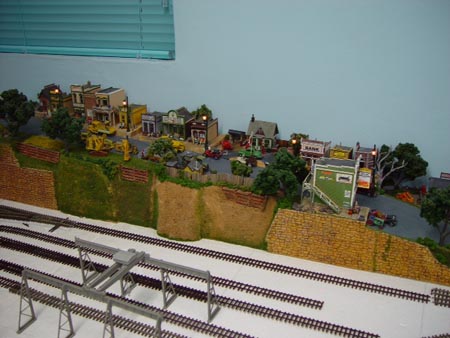 Thanks to Brian and Jim. Don’t forget the latest ‘ebay cheat sheet‘ too – still amazed at the comments I get on that.

And as always: keep ’em coming.

And if today is the day you spring into action, the Beginner’s Guide is here.