“Hi Al; it has been quite some time since I sent any pix.

As a reminder, this is a freelanced late steam era HO railroad (12’ x 8’) set roughly in Northern New Mexico. The town is “San Juan Creek”. The main industries are logging/lumber, coal mining and oil distribution.

Back when I began the layout in 2011, I built it as a modular design because I knew we would be moving at some point. I didn’t think that would be 6 years later.

The layout was built in 4 modules and carefully taken apart for the move in April. Here are some pix of the layout during the process of reassembly of the four modules. 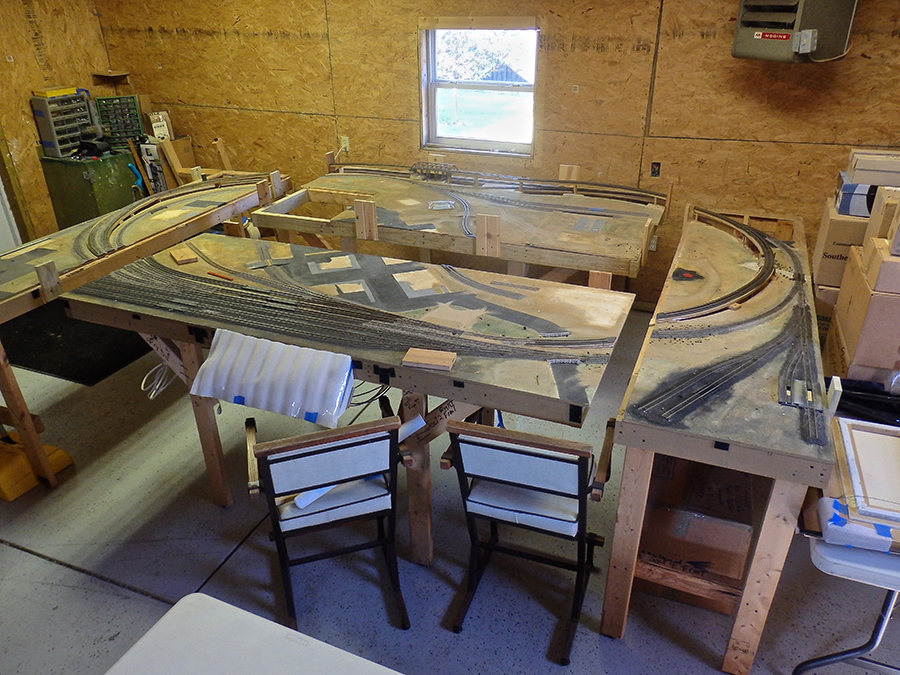 Thankfully, I put leveling screw feet on all the legs as the new shop floor is angled. The former owner was smart to do this as he used to hose out the shop. I won’t be doing that but it was quite a job lining up the 4 modules and getting them all leveled.

I started with the rear 4×8 module leveling it out first. Then I brought in aligned and leveled the two side modules and finally the front module. 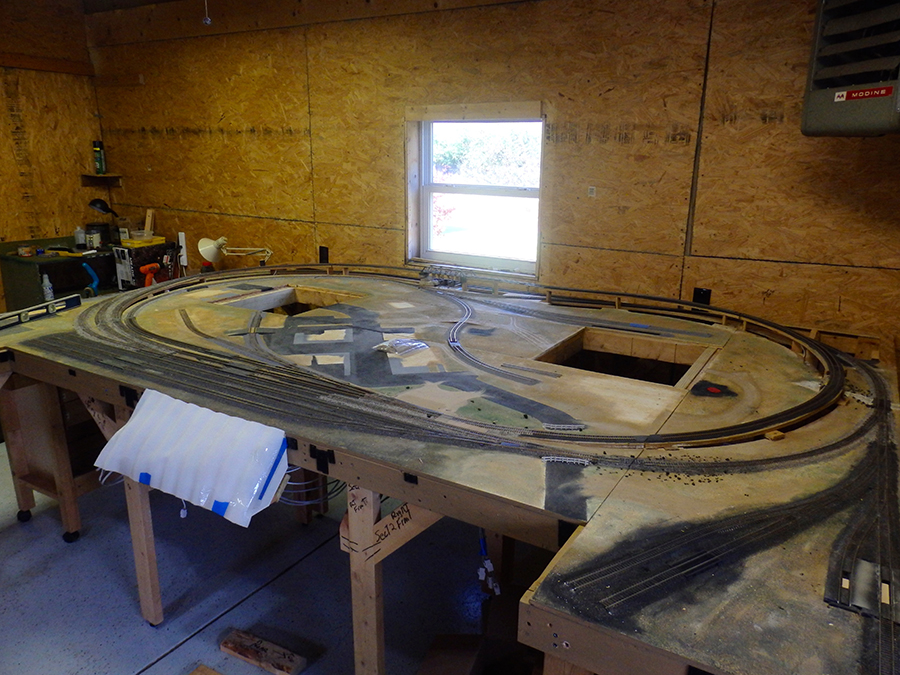 Here they are reassembled. 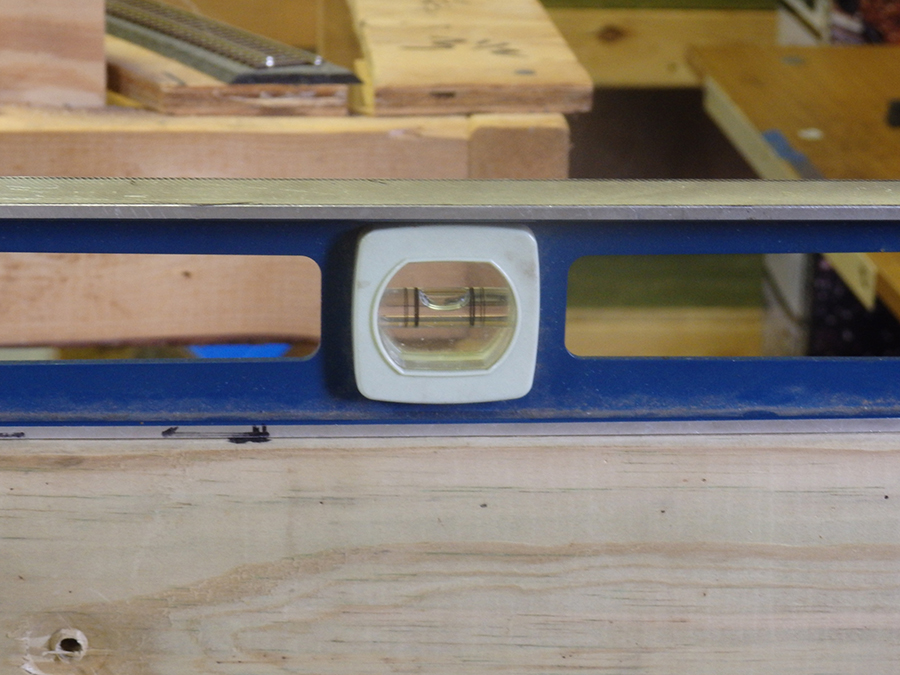 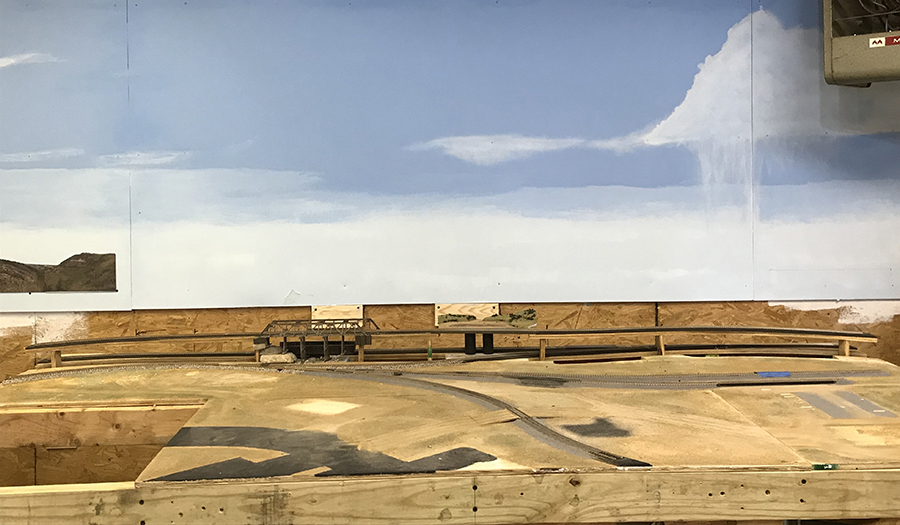 And here is the new backdrop. It was my first try and I really like it!

After I went to all the work of assembly and leveling, I took it all apart so I had better access to parts of the rear of the layout. I started with the rear center module. 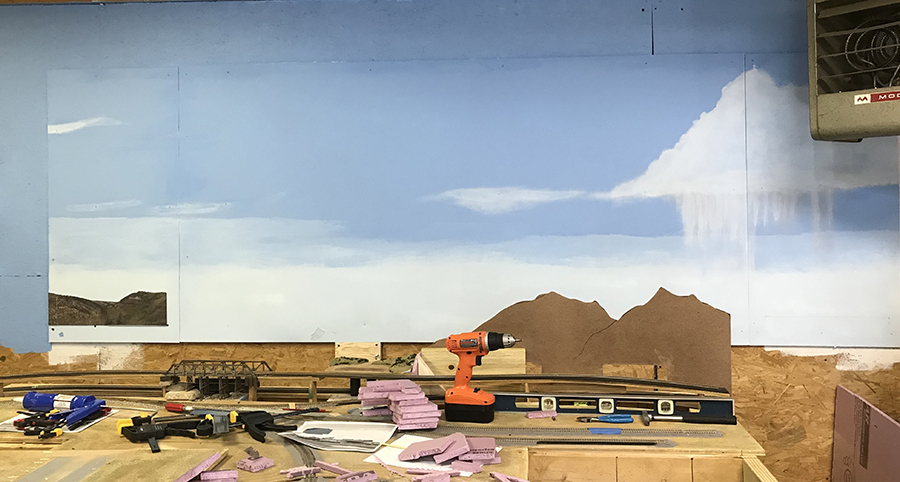 Some of the prep work and tools. 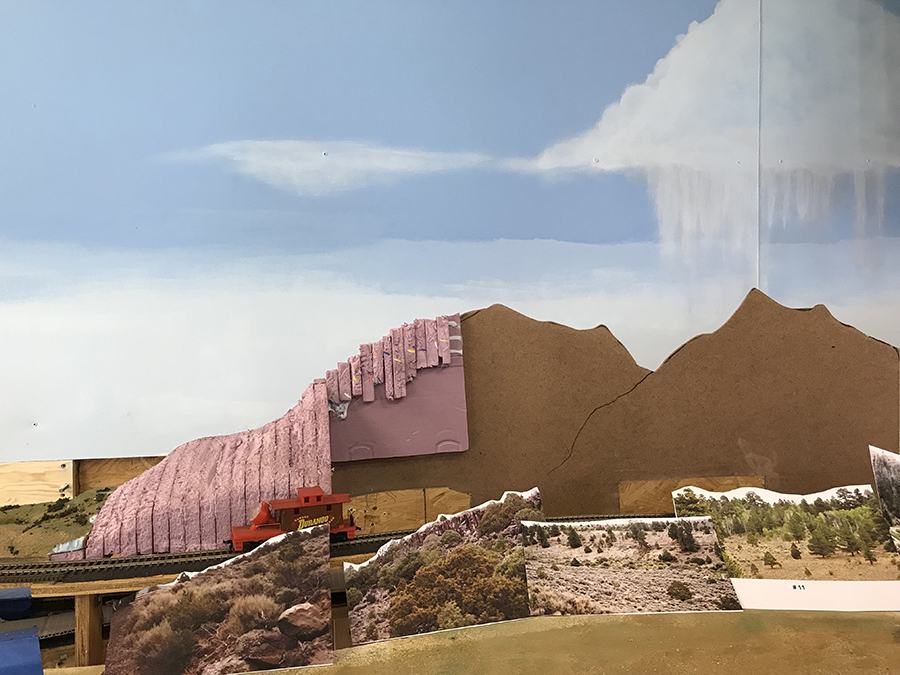 This is the west end of the rear center module. I thought I was going to use 1/2″ foam board until I realized it would take forever! 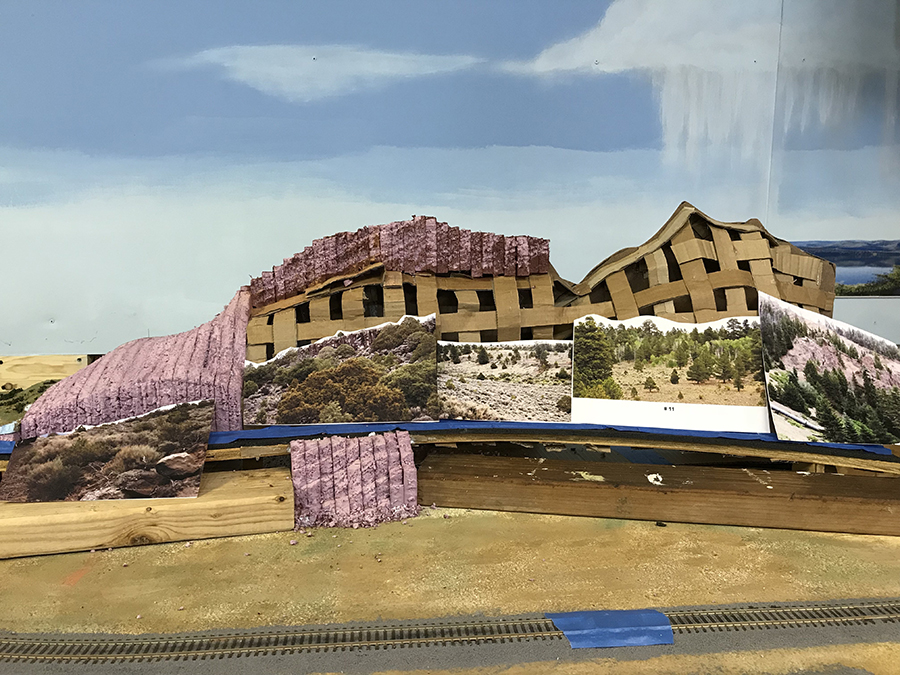 So I switched to the ‘old school’ hard shell construction. I placed printouts of actual pictures I had taken along the “Cumbres & Toltec” in New Mexico and Colorado as “mock-ups”. 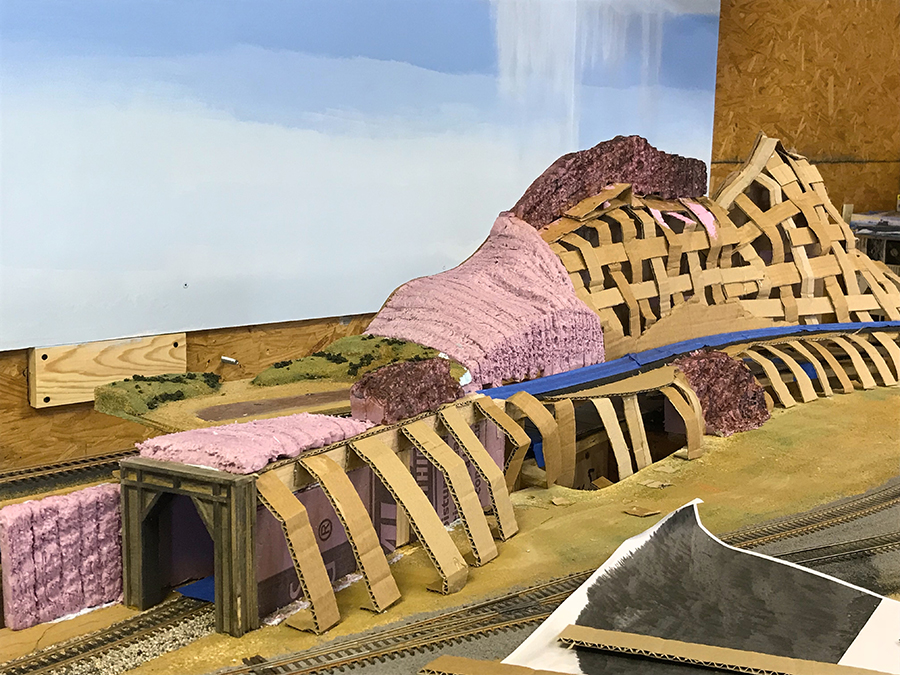 The pink foam board, however was a good base color for the exposed rock, it came out perfect with a little painting. 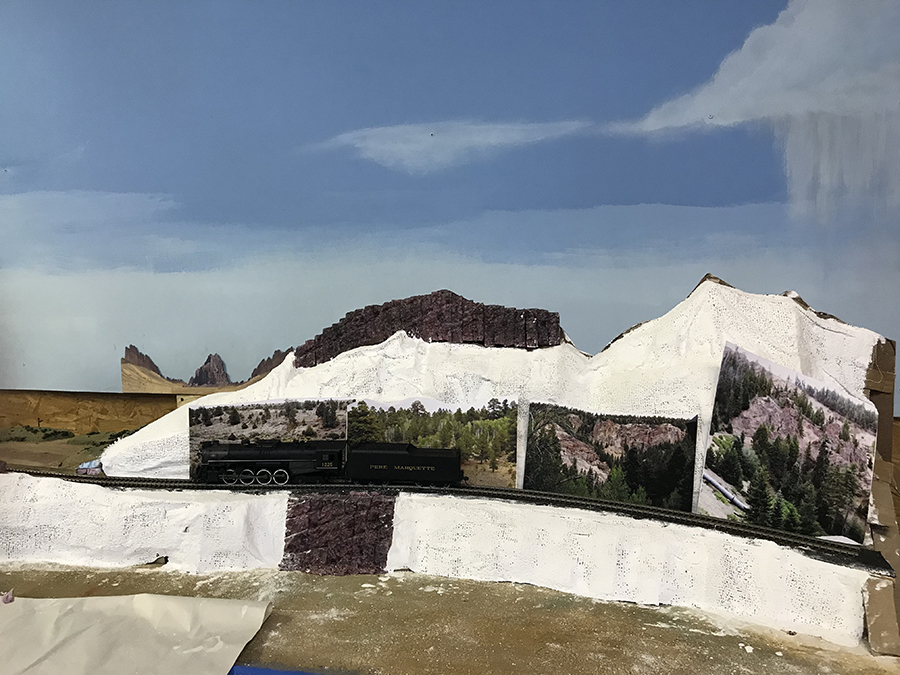 Plaster cloth applied and I am checking clearances with the 2-8-4 loco. 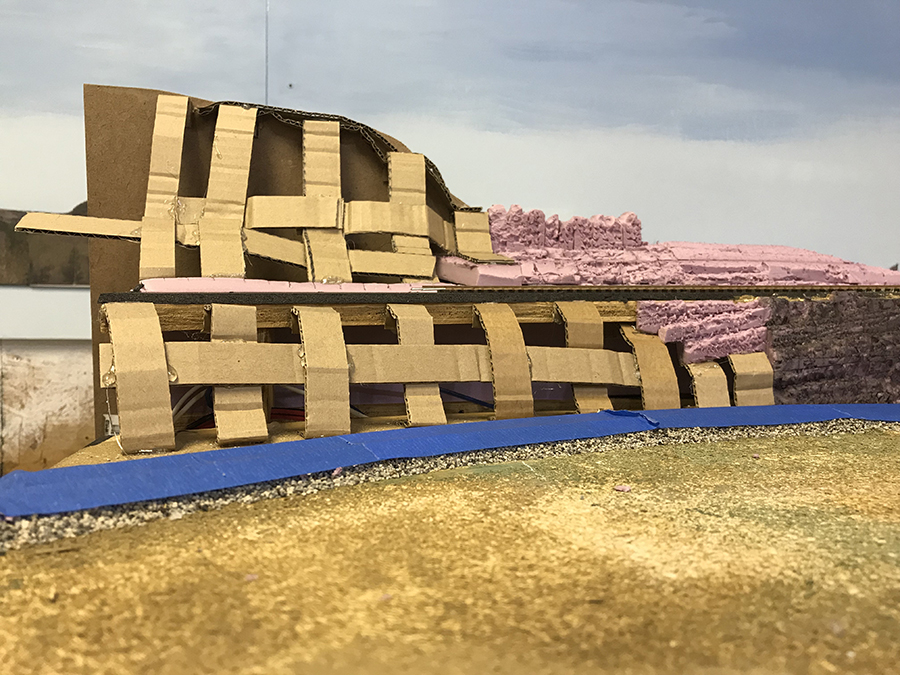 Other end (east end) of the center section. 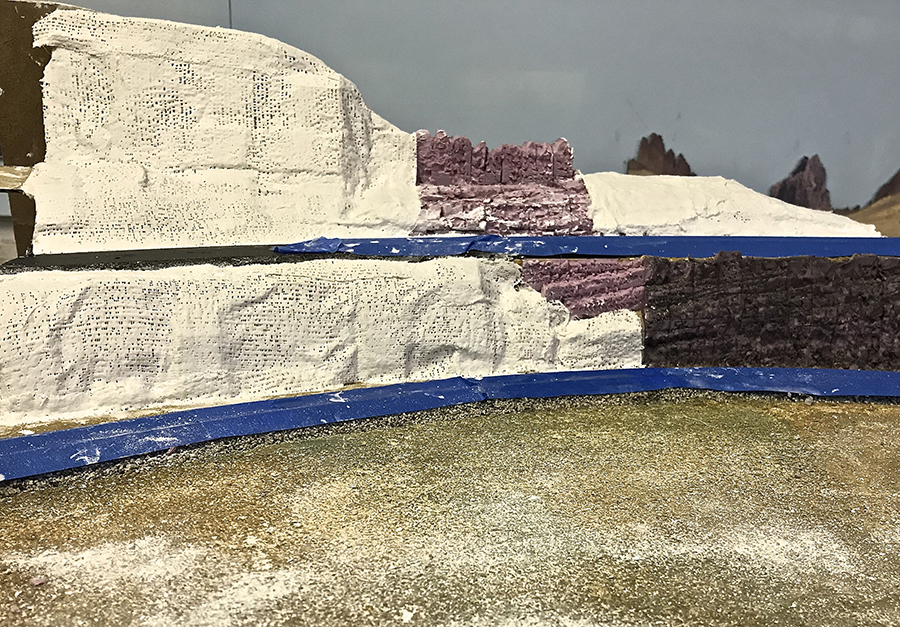 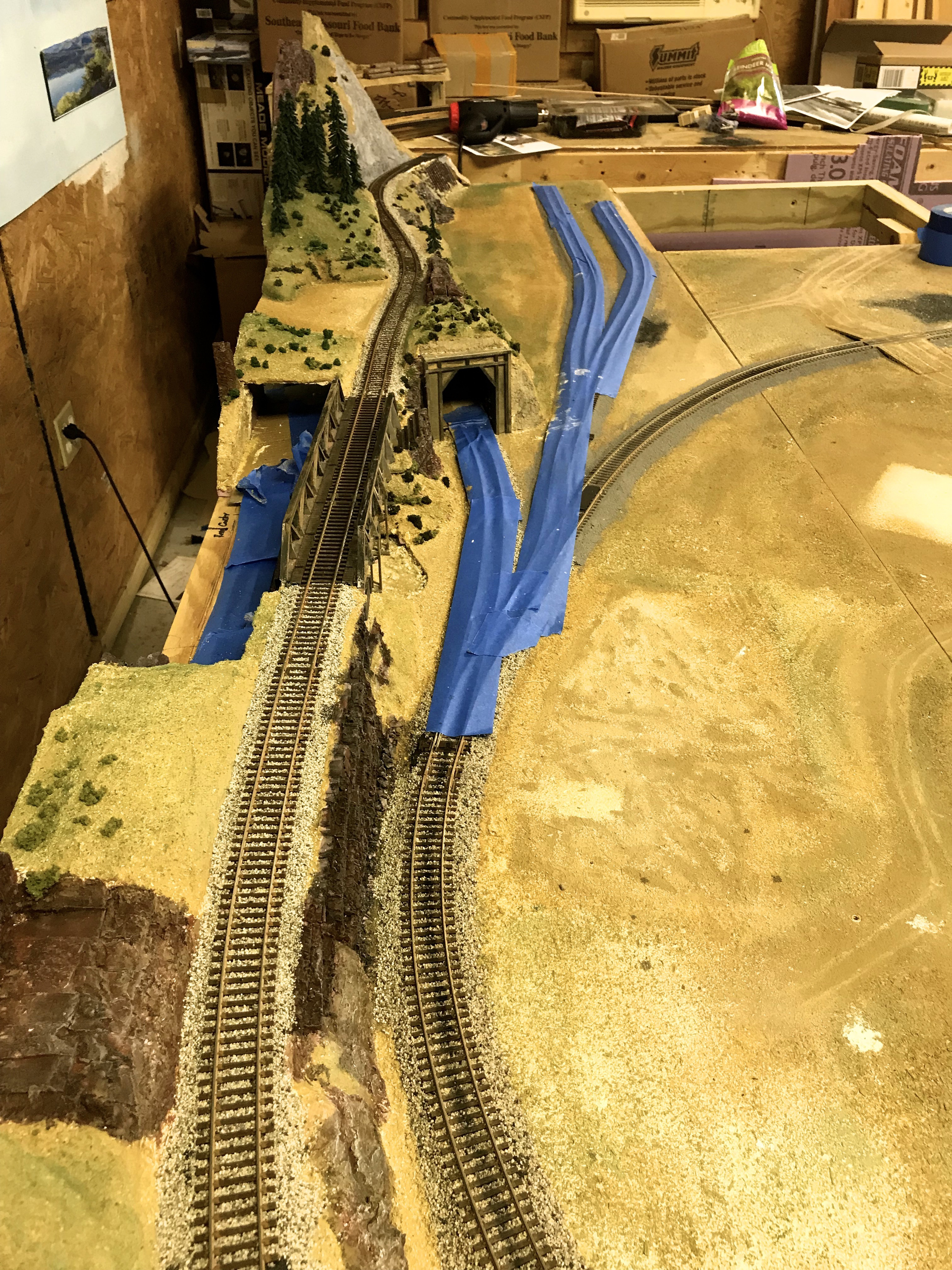 DONE with this module. I accidentally discovered a technique for making these sculptamold rocks. As the sculptamold dried, i noticed it looked like an outcropping of rocks so I scrapped it out of the mixing bowl and just “slapped” it on the plaster cloth! With some paint and shading, they look real.

I then moved this module back against the wall and attached the two side modules and front center module.

Landscaping in the next installment.

“Hi Al, started ( the main thing) about 12 months ago by cutting my garage in half and giving myself a work station then built a baseboard approx 14×9. All was well till I rediscovered some American N gauge I bought on various trips to the US.

Ahh I thought can make a layout for my young grandson. My layout has now been idle for 5 months but the video shows it was all worthwhile and I can’t wait to see his face Christmas Day. It’s 4 ft by 2 ft 6 Ins and a double loop.

Keep up the blog. Will post some pics of my layout when I get it back to reasonably tidy.

A huge thanks to Joseph and Dan.

Loved the way Joseph is building that layout – great pics and narrative. His next insallment will be with you next time!

And don’t forget the Beginner’s Guide – not only is it jam packed with stuff (whether you’re a beginner or not), it’s a lot of fun too.

Please do keep ’em coming. That’s all this time folks.