Mark makes some industrial storage tanks for his layout

I’ve been reading your emails for some time now, and I decided it was time I posted something myself.

Well, I was saving these plastic containers for storage of balast and ground cover; but never got around to use them. Suddenly, an idea hit me when I was looking for something else. The idea was to use them for a structure.

So I set out to research a little on different types of storage tanks. I found some interesting photos, and there they were, almost the exact type that my containers could represent!

I got excited, and started putting pieces aside for my project. The storage tanks were white, so I painted my containers and set aside to dry.

Although, I looked at photos of these storage tanks in groups of as few as one, and as many as six, I decided three was the magic number. I also decided one would be shorter to add more variety.

Next, I cut out a piece of cardboard for the base, and arranged the containers in various positions. Something was still missing. I needed a storage shed for tools and what not.

I fashioned a building out of a small cardboard box, and added siding I made from corregated paper I had purchased from a local craft store. I found a door and window combination online and printed them out in a suitable size. The door and windows were simply glued into place and set aside to dry.

I also found a logo for a liquid fertilizer company, which I printed out on decal paper. Of course, sizing it to fit, and making three of them for my tanks.

I made a security light out of a coffee stir stick and an led. I saw this done in a YouTube video, and I really liked the simplicity. So, check out the pictures, and I hope it makes your column. 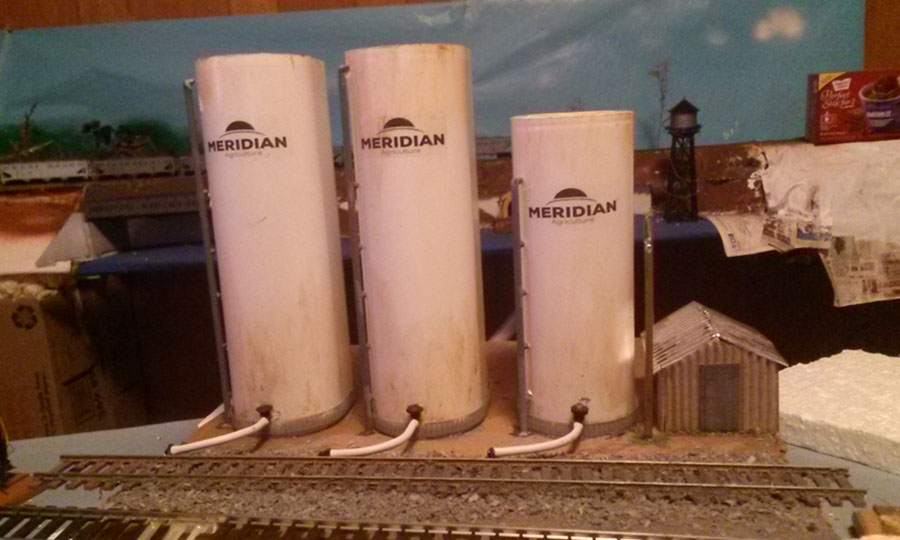 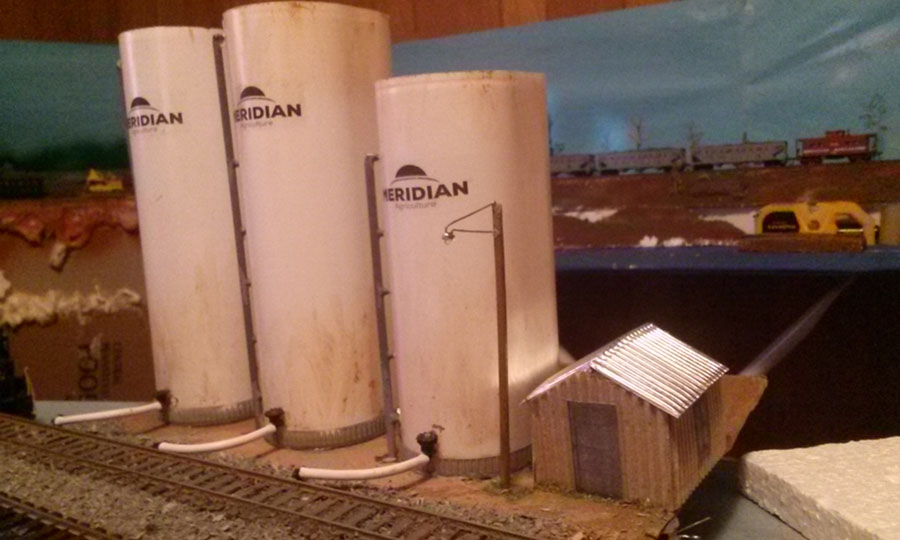 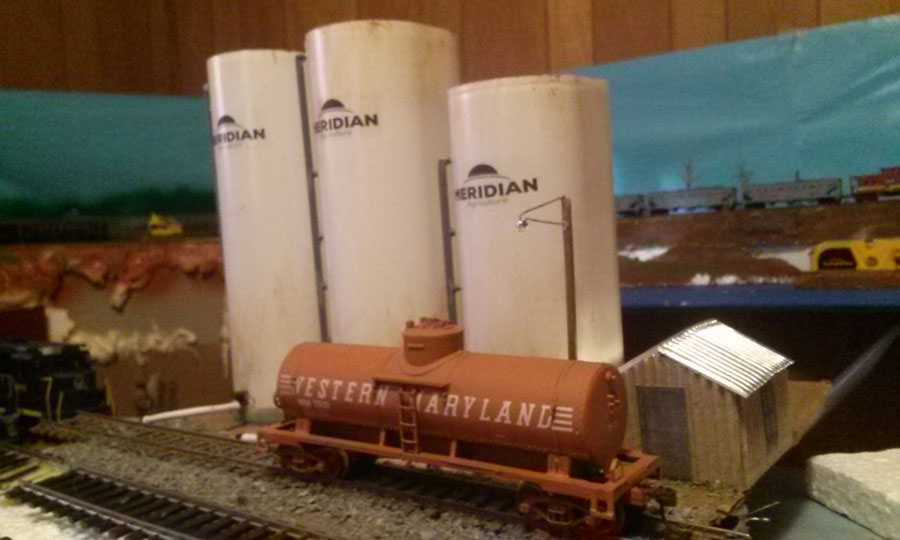 “When I first started my layout, before I had made my design decisions, I saw this combination passenger/baggage car at a train show. For the exorbitant price of $5.00US I thought it might be useful. 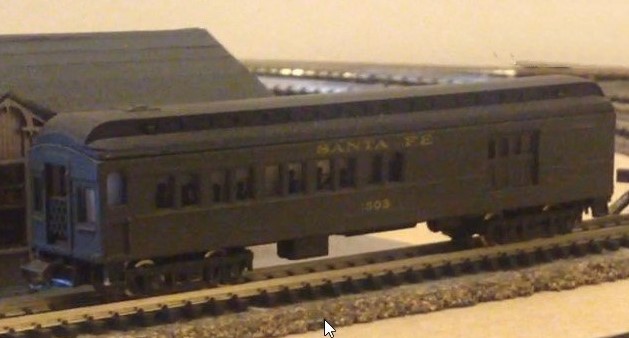 When I got it home and put it on my layout, a few problems came evident.

First off, it had a tendency to derail on anything that wasn’t straight track.

Second, it had a light inside that was so bright it made the top and sides of the car glow. The pickups for the light were putting enough drag on the wheelsets that the car barely rolled if I pushed it down the track.

Fixing it wasn’t hard. First, I took out the light and the pickup wipers entirely. T

Then I removed, disassembled and cleaned the trucks.

Finally, I readjusted the wheelsets so they were in scale. Now the car rolled properly and I was left to decide what to do with it. Since by this time I had determined that I wasn’t going to be running passenger service, the car sat on my bookshelf.

Now skip ahead about 4 months and I needed a restaurant for the town.

None of the kits I saw were quite right for what I wanted for the locale I was modeling.

Then my eye caught the combine on the shelf and I thought it might make a fine diner.

So, I pulled it apart again, painted it, installed a couple of low power LEDs in the roof (with enough resistance in the line to make them pretty dim), and reassembled it leaving off the trucks and couplers.

Addition of steps and a handicap ramp, some ground cover, bushes, trees, a picnic bench, a sign on top (it’s named for a very special lady in my life) and we have a diner in town. 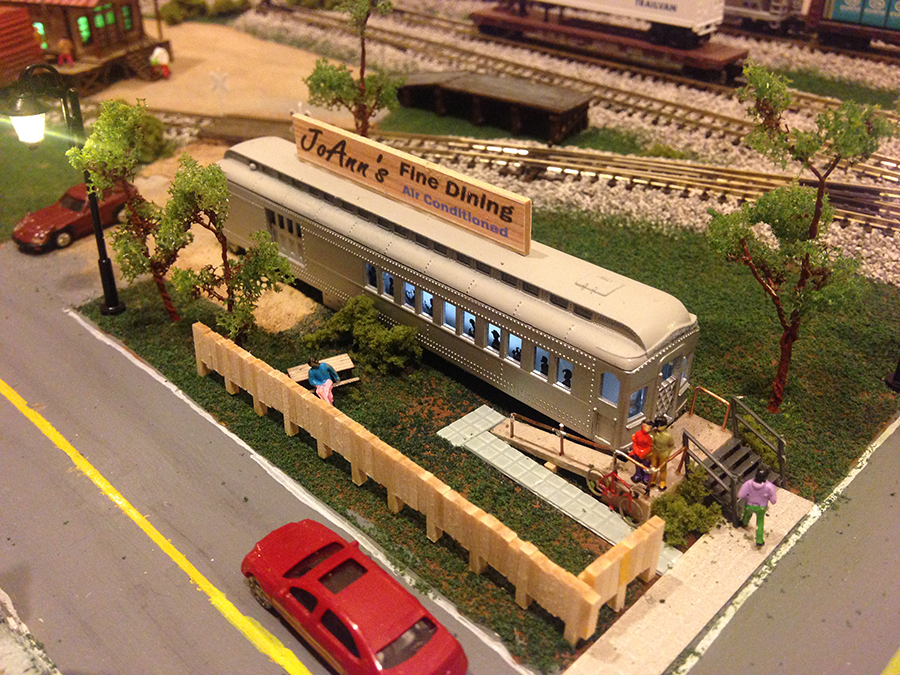 There are other pieces of rolling stock that can easily be repurposed: cabooses make good yard boss offices, old box cars make industrial storage sheds, a flat car makes a stage for performances in a park.

The only limit is your imagination. Go wild and have fun.

A huge thanks to Mark – I think his tanks look spot on.

And a big thanks to Dale too.

And it just goes to show what scenery can be made from, with a little imagination.

That’s all for today folks – don’t forget the Beginner’s Guide if it’s your time to start your layout.