My ‘best’ model tip is TRACKWORK.

I’ve only built three layouts (working on my fourth) and the ONE thing you HAVE to get correct is near perfect trackwork. After all, it’s useless if trains can’t take a bend or derail at a join.

JOINS: Need to be as perfect as possible. This includes insulated joiners. Its sometimes a good idea to arrange joins as non-adjacent (flexi track).

BENDS: Don’t force flexi track to do more than fixed track will do. If it won’t fit…..do something else.

“I take used coffee grounds, dry it and chop it very fine. It makes excellent ” dirt ” or what ever else one can think of.
No real cost involved either.( if you’re a coffee drinker)
Hopes this helps, Al

“I’m not new to rail models and their lay outs. But over the years I’ve completed three or four layouts for other people, sorry to say none of my own.

To get done fast with wiring I use the phone wire and the plastic connectors the kind with four contacts inside use a multi-plug phone wall jack. Pre-wire my blocks and switches in the control area with the wall jack boxes, do the same with the blocks and switches plus all accessories. Then make up my line with the male phone jack ends and start plug them where they go. I found out that if I want to change a block or other item I just unplug.

If you would like give me a few weeks and I can chase down part numbers for the plugs, wall mounts, and needed tools.

I hope this is helpful to your subscribers.

And now, Kim’s ‘how to’ on making cheap LED signals:

Hi Al and all the modeler’s.

This is so easy a job and much cheaper than bought ones.

First i bought a pack of 4 signal’s for $4.50.They didnt have lights and only had the plastic fake.

First i used a jobmate or mini hand drill tool.but not the drill only the tool.The drill will work to good and most likely buggerup the part so i hand drilled the holes bigger by useing the tool in the photo by hand It is a diamond thingy so goes fast..plastic is soft and doesnt take long.stop short of the face of the signal as to not drill out and damage it.

I bought these 2mm led diodes from ebay for $2 and free shipping you get 20 diffrent colors and resistor’s come with them.Found the other led diodes from mitey lites to expensive for 4.

Solder the stripped telephone wire as close but not touch the diode plastic.The diodes are not marked with positive or negative.Use a 1.5 volt battery to test what side is positive as seen in photo.

Keep the positive on the same side negative on other side.Be careful dont over heat it as you see in photo i placed the clip as close to draw heat from the part.Trim any extra solder.Try to keep plastic on the wire intact and close to part soldered reason i soldered them before putting them in the holes as to not melt the signal and find it much easier and alot safer..

Next the ground.both positive should be on the same side and ground’s on the other side.Now carefully bend the negative so they cross beside each other as you will solder the black ground wire on both post’s as seen in photo.On the signal i ran the red wire in the slot for the ladder the green in the center and the black in the right hand slot.I drilled a tiny hole in the bottom of the signal as close the body as i could to run the 3 wires threw.

Paint the wires black.Now the ladder that comes with it.Has two curved parts on the top.I trimmed it down so the ladder will fit in the slots with the wires.Your done woooooo hoooo

PS if anyone has problems or dont understand leave message in Al’s site and i will try to make easier to understand.And last if you want the signals for DCC since its a constant 28 volt’s use step down resistors to 1.5 volt can get them on ebay as well.Okay i said anough enjoy.” 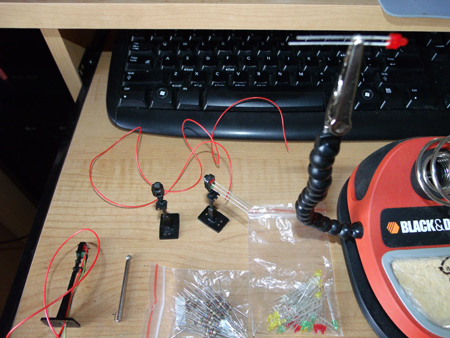 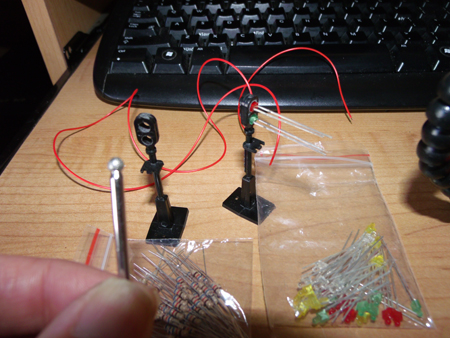 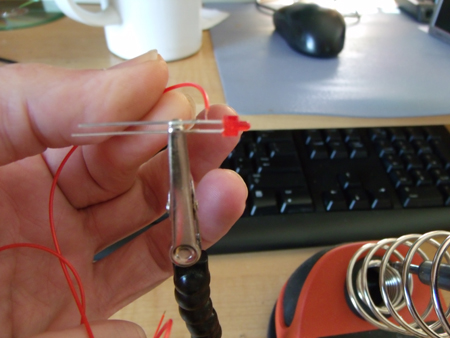 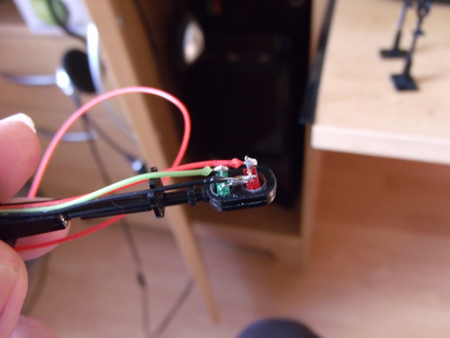 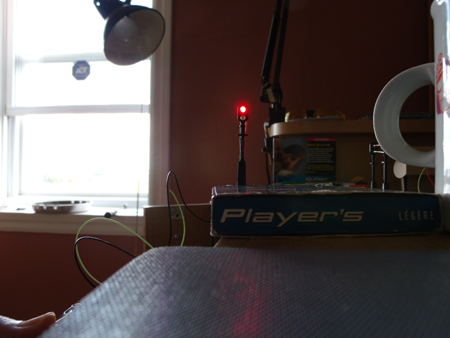 I’ve added the LEDs to the ‘ebay cheat sheet’! Click here to have a look.