Tony’s been in touch with his garden layout:

I recently came across some photos of my garden layout at my old house and thought they might be of interest.

It was a G scale double main line approximately 60’ by 50’. We had some woods behind the house and my son and I decided to build the layout in the woods.

We ran into numerous difficulties but I would say that, overall, we were very glad that we built it that way. One great advantage of a garden railway is that you can run it through natural, growing vegetation. 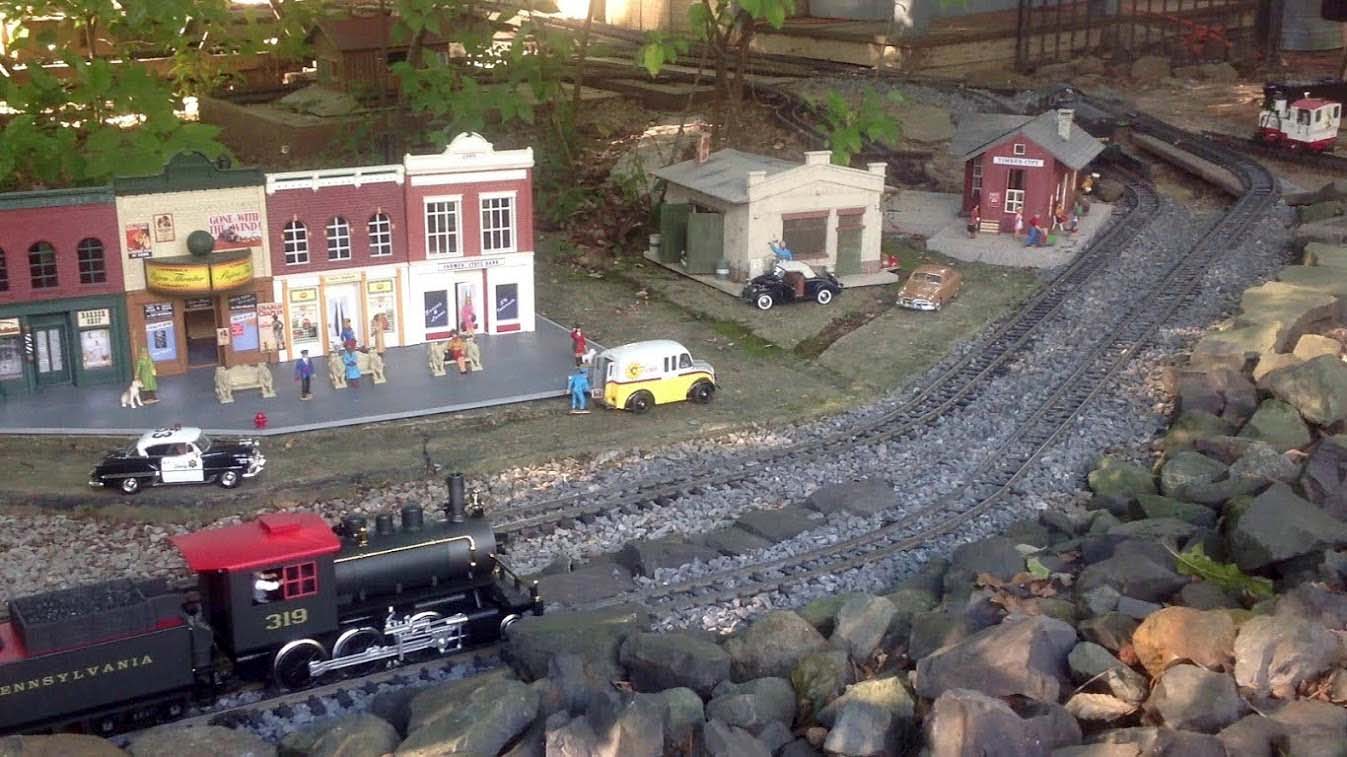 This was my first outdoor G scale layout (we had one around the tree every Christmas for many years), and there was a large amount of trial and e 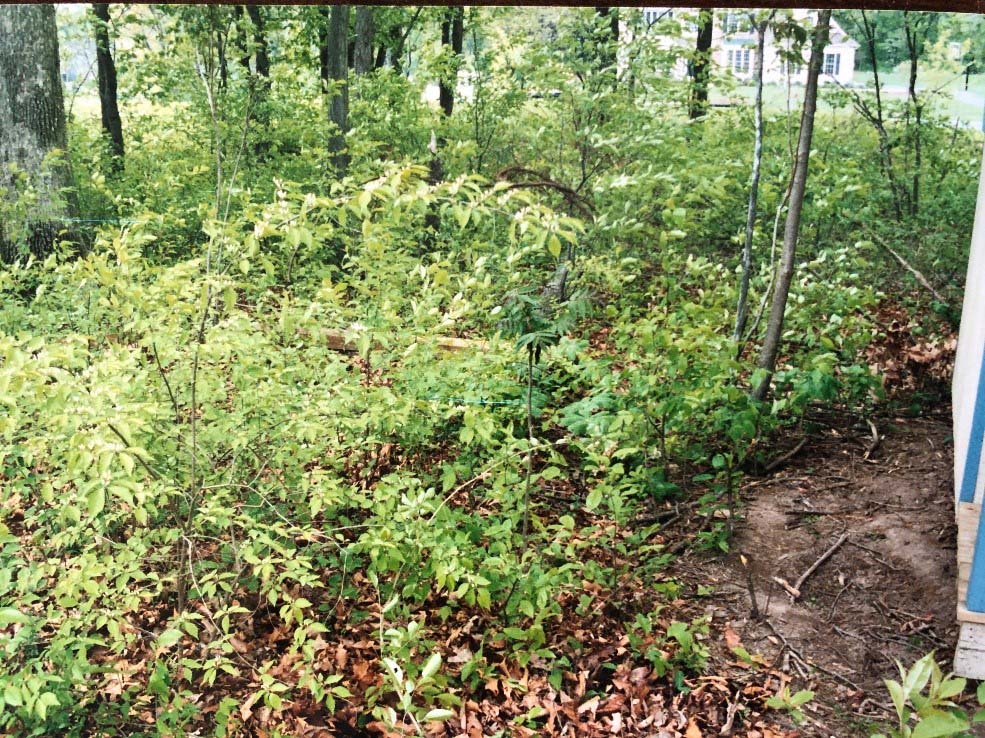 This is what we started with. 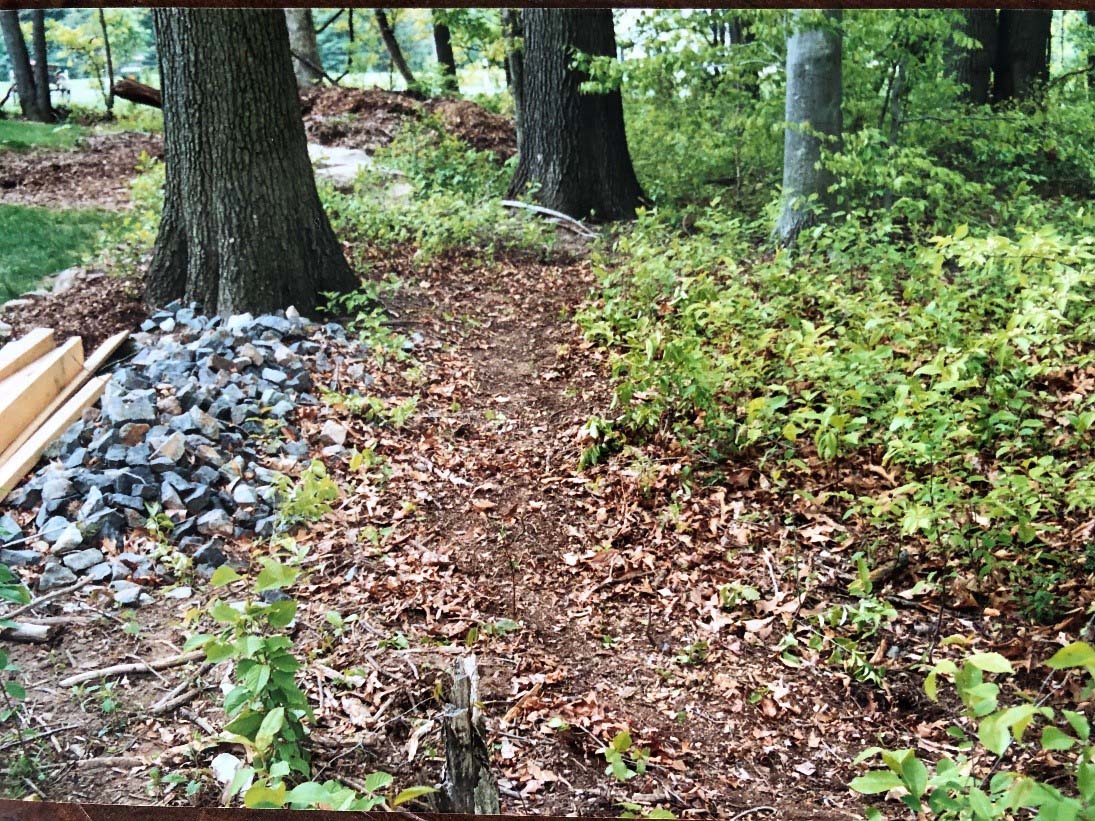 My youngest son, Mark, really got into building this layout and was a big help throughout.

The area had a number of large trees and the underbrush where we built the layout was mainly composed of small to medium sized trees.

After clearing some space for track, a small town, a farm, etc, we started trimming the trees to scale height. We had no idea how this was going to work out, but 10 years later, the trees were still thriving. Each spring I just cut them back and shaped them.

There happened to be a gravel supply company near us with a G layout out front and they sold us 60-pound bags of just the right sized stones for ballasting. This would have been way too expensive if we had to buy it at a regular garden store.

We just dug trenches, filled them with ballast and laid the track on top, then added more ballast. The process was quite pleasant- pretty much the same as prototype track laying!

At first, we had an issue keeping power running to all areas of the long track, until I finally realized that LGB track has little screws attached. They are imbedded in wax under a sleeper and we never knew they were there! Once we screwed together all sections of track, power remained steady with just 2 electrical connections along the approximately 250’ loops. 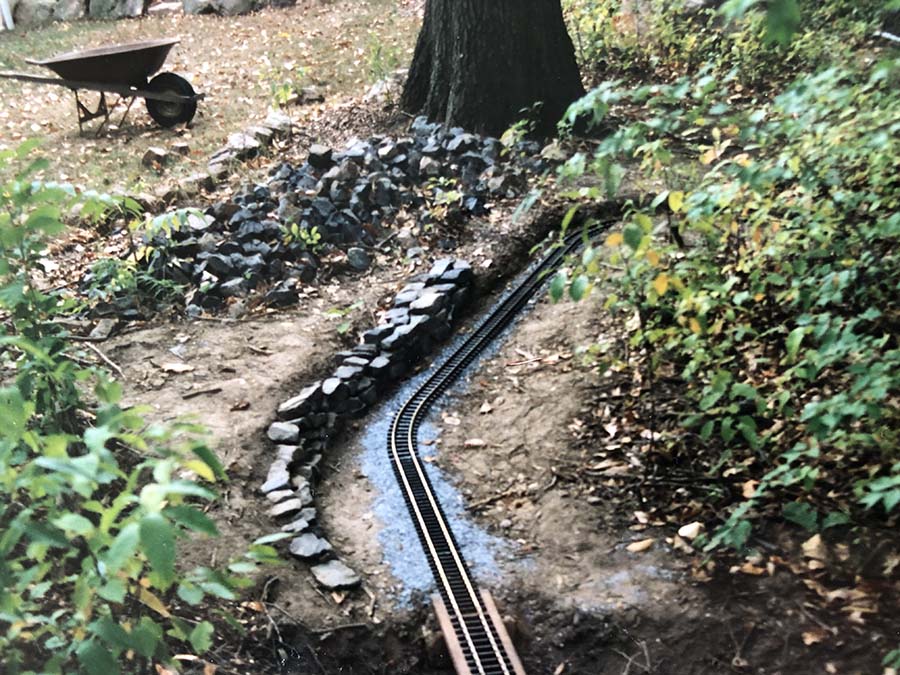 We had a lot of natural stone around in the woods and used it throughout for retaining walls. 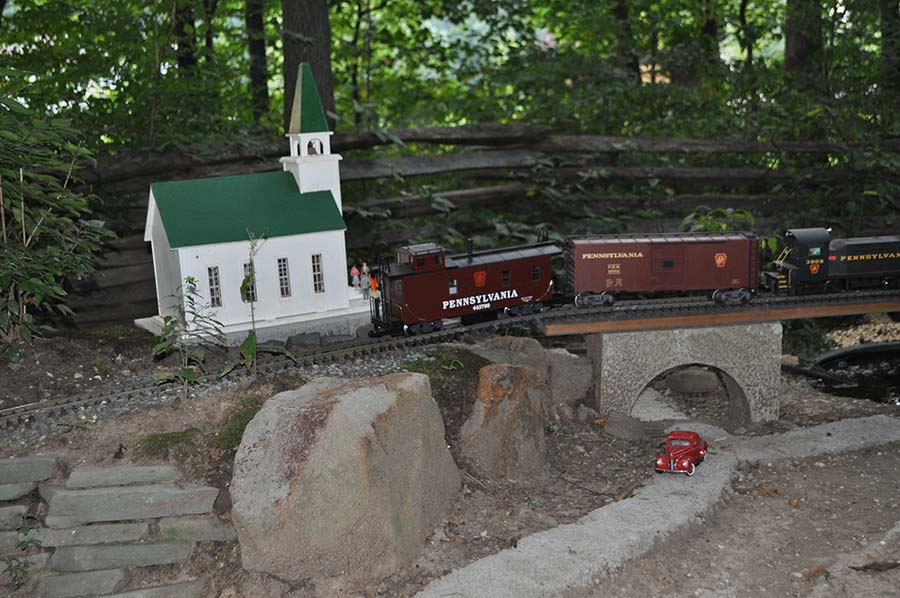 This shot shows a few other techniques we used. The whole area of the layout was on a gentle slope, dropping about 18” from the top to bottom and we built a variety of bridges and embankments, keeping the track fairly level.

The hill that the church is on was built up with rocks and dirt. Right in front of the church you can see a few twigs. These were transplanted from another area and watered regularly. They eventually grew higher than the church and were trimmed into a very nice-looking tree.

You can also see the concrete bridge- a rather simple casting. We made a mold out of wood, with a bucket in the center and we were able to make 3 bridges out of the mold. The roads were very simple- we just mixed up some concrete and started troweling it out where we wanted the road to go. In the town area we built a wood form to cast the roads. 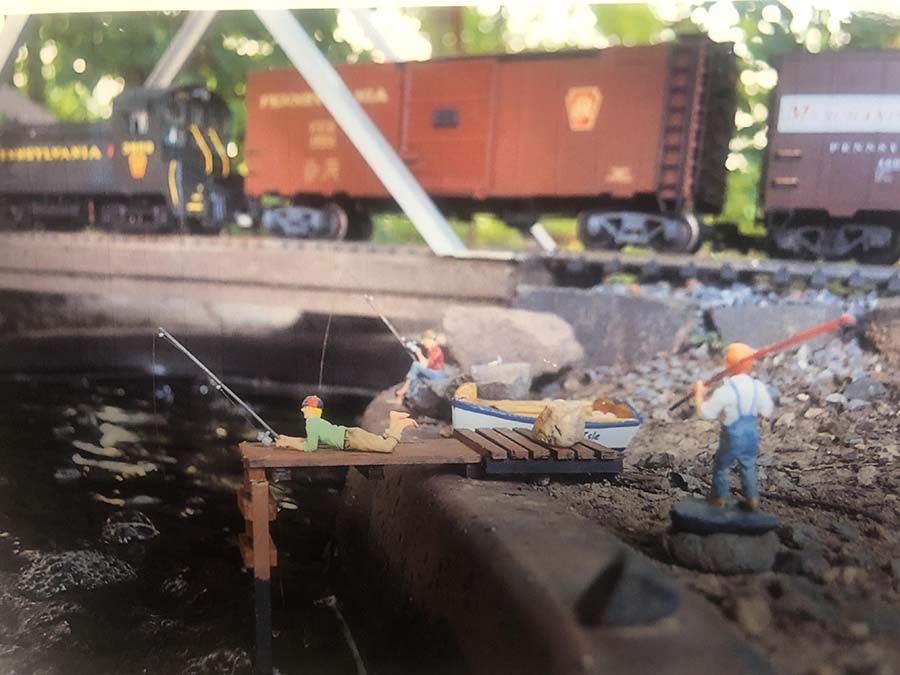 Another nice thing about garden railways is that you can use natural water. We bought 2 plastic garden ponds and put one at the top of the area and another at the bottom. We eventually connected the 2 with a small stream, and a pump took the water back to the upper pond. 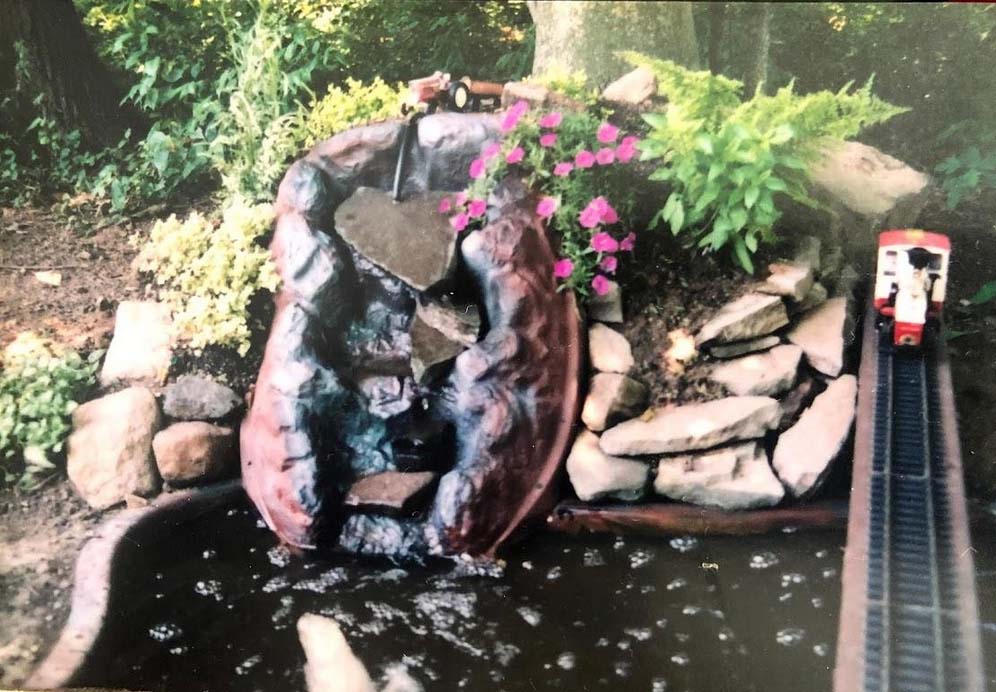 We started the whole project by building a shed next to where the train would be. This turned out to work well because all the rolling stock, vehicles, and people could be brought out or put away in just 20 minutes.

Most of the buildings were plastic kits and they did fine being left out- just needing occasional cleaning. The couple of plywood buildings, like the church and barn, were taken in also. 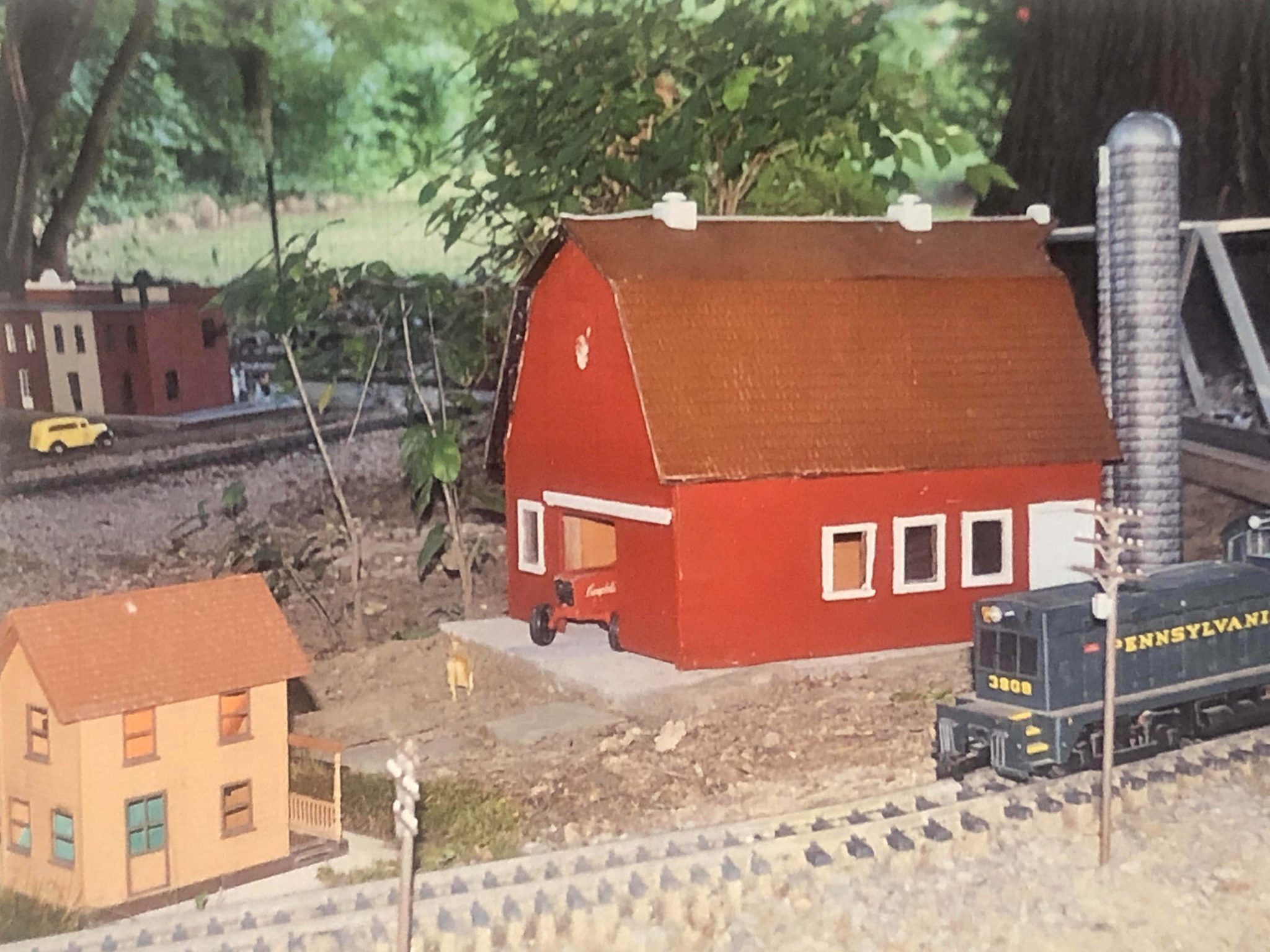 Behind the barn you can see one of the small trees that was cut and shaped each year.

The layout was located in Pennsylvania and the biggest challenge was getting everything cleaned up after the winter. After a few springs of a long process of cleaning leaves, twigs, acorns, etc from the tracks, we decided to buy some very large tarps and we covered most of the tracks at the end of fall.

After a couple of years of trial and error (mainly adding enough large stones to keep the corners from blowing up in the wind), the tracks were in pretty good shape when the tarps were taken up in the spring. A quick pass around the track with some fine sandpaper, and the trains were soon running. 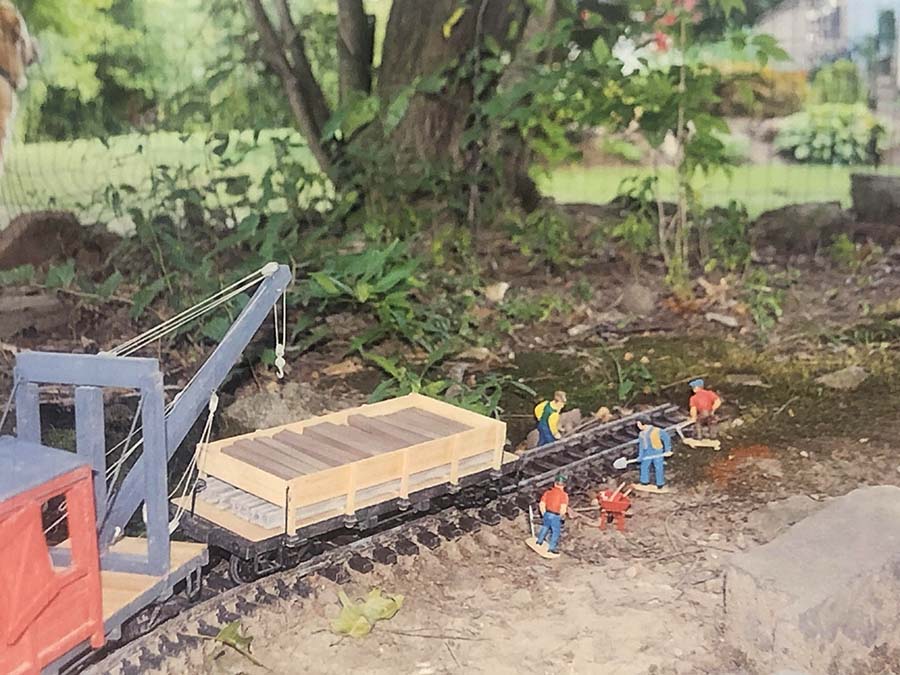 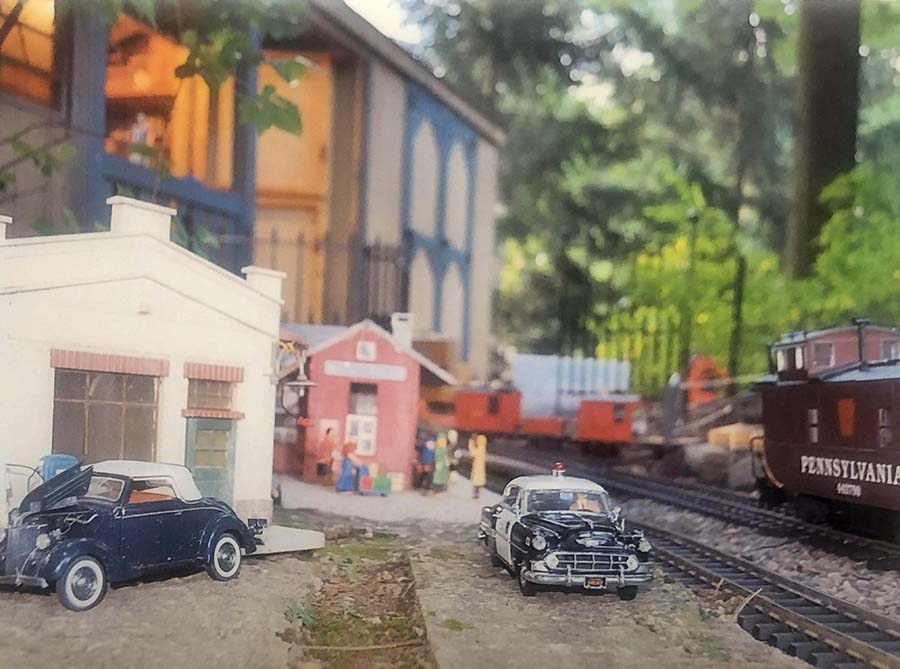 Storage shed in the background. 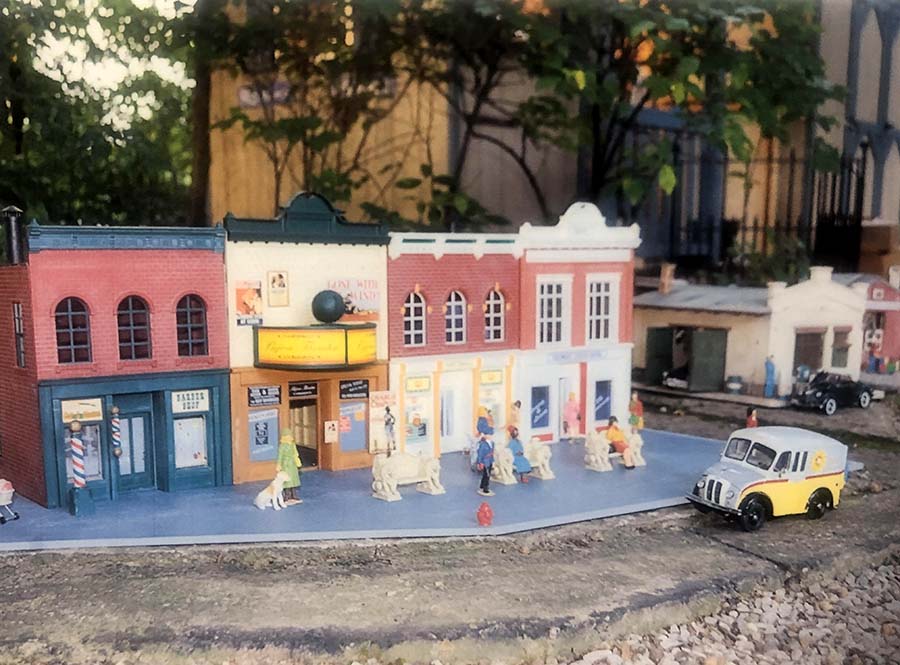 The barber shop on the left has a photo in the window of my grandfather’s barber shop. The shops sit on a piece of foam core- with all the people glued on. This made it easy to move in and out of the shed. 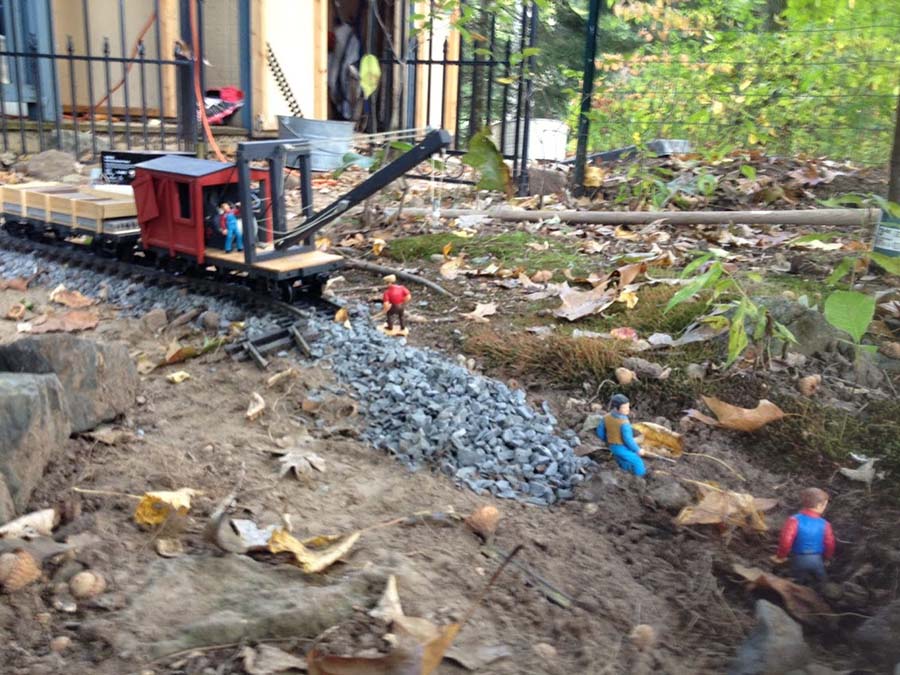 This shot is obviously in the fall- just about time to put it away for the winter. 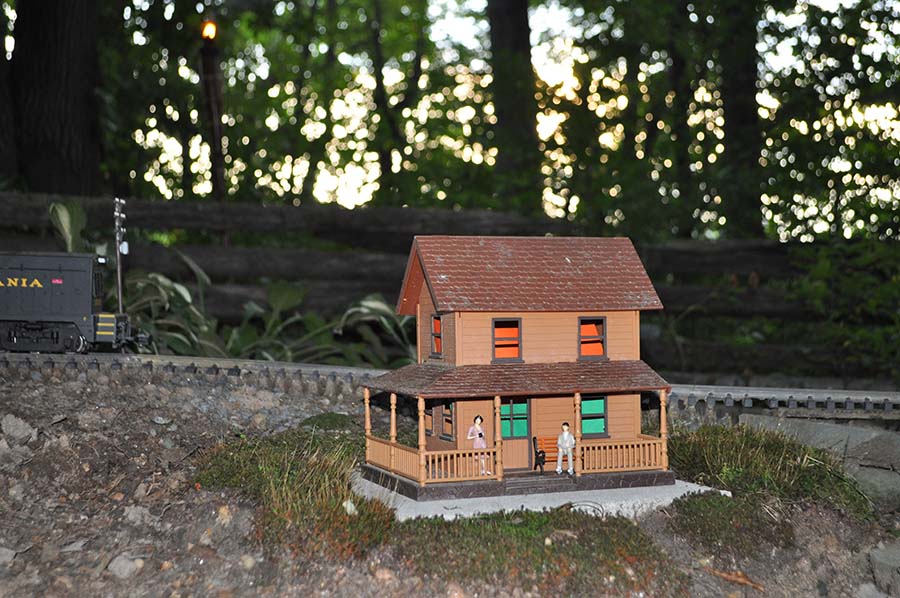 You can see a little of a natural environment that we used. The “lawn” around the farmhouse is transplanted moss. The moss grows liberally around the edges of the woods and takes well to transplanting. Just occasional watering and it lasted year after year.

The layout was planned mostly to just have trains running, so we kept it simple. There were only a few turn-outs, for a spur to a freight yard, one to a lumber mill, and one under construction.

By the way- this all sounds expensive, and G scale really is. I was very lucky to live just a mile from one of the top train auction houses in the US (Ted Maurer’s) and I bought most of my G trains there.

Auctions are really fun, if you ever get to go to one; if you are careful, you can get most items about half-price. Because I could go often, I was able to purchase items I needed, plus some to sell on eBay. It obviously wasn’t free- but this greatly reduced the cost.

Like, I suppose, so many garden layouts, we were just getting to where it was finished- and everything was running well, when we decided to move.

We had 10 years of great enjoyment building the layout, but only a short time enjoying really running it. My only regret is not getting any good photos of the full finished layout- all of these are ones taken along the way.

As always- thanks Alastair for the great work you do for us!

A huge thank you to Tony – I do love it when a garden railway comes in. Unfortunately yhey are few and far between, but always a please sure to see.

Of course, when it comes to garden layouts I always think of Cary’s G scale.

Please do keep ’em coming. I can’t tell you enough how quiet it is this end.

And don’t forget the Beginner’s Guide is here if you want to get going on your very own layout.