How to make model railroad scenery

Here’s how to make model railroad scenery – Arnie does a stunning job of it.

Thanks for posting my response to readers questions about my SV&GS layout video. Apparently, since my response posted, a number of readers asked about a “How-To” on the mountains and tunnels on my layout.

Since I am not doing any new mountain or tunnel construction, I don’t have a video I can produce on this. However, I found some old photos of very early construction of the layout dating back about 10 years that I thought would be helpful regarding how the mountains and tunnels were made.

Since a picture is worth a thousand words, I decided to do a sort of “Before-and-After” image sequence accompanied by some step-by-step commentary. I’ve also placed text on the photos that is helpful. However, since the photos when posted are rather small, it may be hard to read what is on the photos. But I think the accompanying text should be sufficient.

I picked a Before & After sequence of 3 photos of a waterfall on the mountain rock face for the How-To. The same general construction principles apply to all the rock face mountain and cliff surfaces on my layout. And the example using a waterfall also explains a bit about creating water scenes. Additionally, the same painting and weathering principles are applied to creation of the tunnel portals.

Let me start by saying that I tried to create my layout to be as light as possible. So instead of using the traditional “hard shell” technique which uses a heavier substructure of wood and a lot of wood bracing covered with plaster cloth…I chose to use light weight pink extruded foam board for the substructure that underlies all elevated areas (i.e., mountains & hills) and general terrain surfaces (e.g., roadways). So that’s the technique on which the How-To is based.

The first few photos are just Before & After views of the entire layout to show my model railroad scenery. They show the rectangular plywood benchwork that serves as the substructure for the foam board based terrain. Then there are photos of the initial foam board placement. Layers are stacked like layers of a cake and carved as needed until the desired heights are obtained.
Now for the How-To:

• All finely detailed rock faces were made from rubber molds using Hydrocal. This is an extremely fine plaster powder for modeling. Because of its extremely fine nature, it takes on super detail when mixed and poured into the highly detailed rock molds. It also dries to form a casting that is very dense and much harder than conventional plaster. So it won’t break or chip easily.

• When thoroughly dried, the castings are then ‘painted’ with various diluted blackish and gray shades of washes of stain and acrylic paints. (Or use other colors as appropriate to the terrain regions being modeled.)

• The dried castings are then glued against the supporting pink extruded foam surfaces to create rock outcroppings and cliff walls. The foam board can be carved and painted where needed to blend into the rock formations. (See photos 1 and 2 of the waterfall.) Placing a string of such rock castings in line next to each other is the basis for creating a length of cliff or a rocky- faced mountain side. To provide a continuous, uninterrupted wall of rock, the spaces between the castings are filled with Sculptamold (by Scenic Express). This is a paper mache-like product of plaster powder and paper fibers. When wet, it forms a putty-like mass that is then pressed into the areas around the rock castings. When dry, the Sculptamold can be stained in the same way as the Hydrocal castings.

• Pieces of small fallen rocks and gravel of the same color are then placed on larger horizontal rock surfaces and at the base of mountains/hills and glued into place. (See photo 2 of the waterfall.)

• Then to create a weathered look with natural color variations in the stone, ‘dry brushing’ with acrylic paints is used. This means you dip the tip of a paint brush of the desired width into the desired color of paint and then vertically tap the tip of the brush onto a surface (e.g., a piece of foam board or paper towel) until the tip is almost dry. Then you lightly brush that color over the rocky surfaces. I used browns and greens to simulate soil, earth and moss on the rocks. (See photo 3 of the completed waterfall.)

• The water on the horizontal surfaces of the waterfall is created using “Realistic Water.” It’s brushed on the surfaces of the water path of the falls. Additional coats are added to create more depth and sheen. The product “Water Effects” is used to create the falling water. The falling water is made off the waterfall and when dried is placed on the falls and glued in place using a coat of “Realistic Water” at the contact points of the ledge and catch basin on the ground. The srugace of the falling water is then lightly dry brushed with white paint to create the illusion of moving aerated water. (See photo 3 of the completed waterfall.)

• Then turf (finely ground foam rubber of various colors) is sprinkled and glued to the ground and between the base rocks at the falls. I used earth, soil and mossy turf colors to finish the ground cover. Add foliage and figures and you have a very realistic scene.

The same staining and dry brushing techniques were also used on plaster castings of tunnel portals (made by Chooch). (See the photo of the finished triple tunnel portals.)

Painting with acrylic paints and dry brushing were also used on plastic tunnel portals and other structures (e.g., bridges and buildings) wherever aging and weathering effects were wanted for the model railroad scenery.

I hope this serves to take the mystery out of creating scenery of this type.

(The below images are clickable) 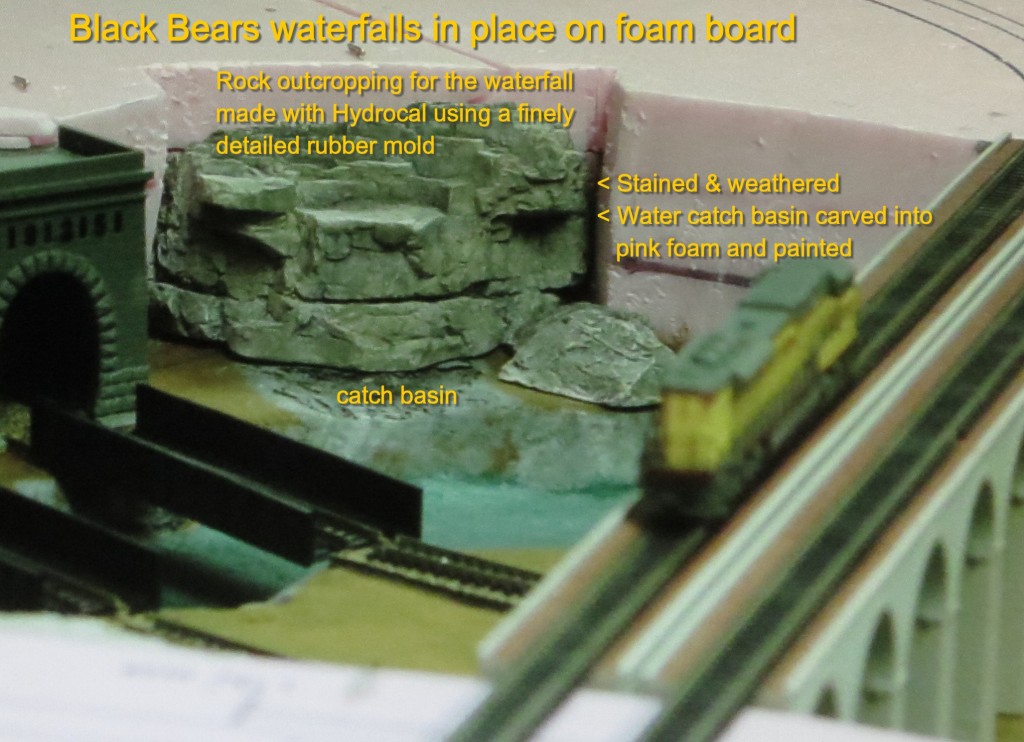 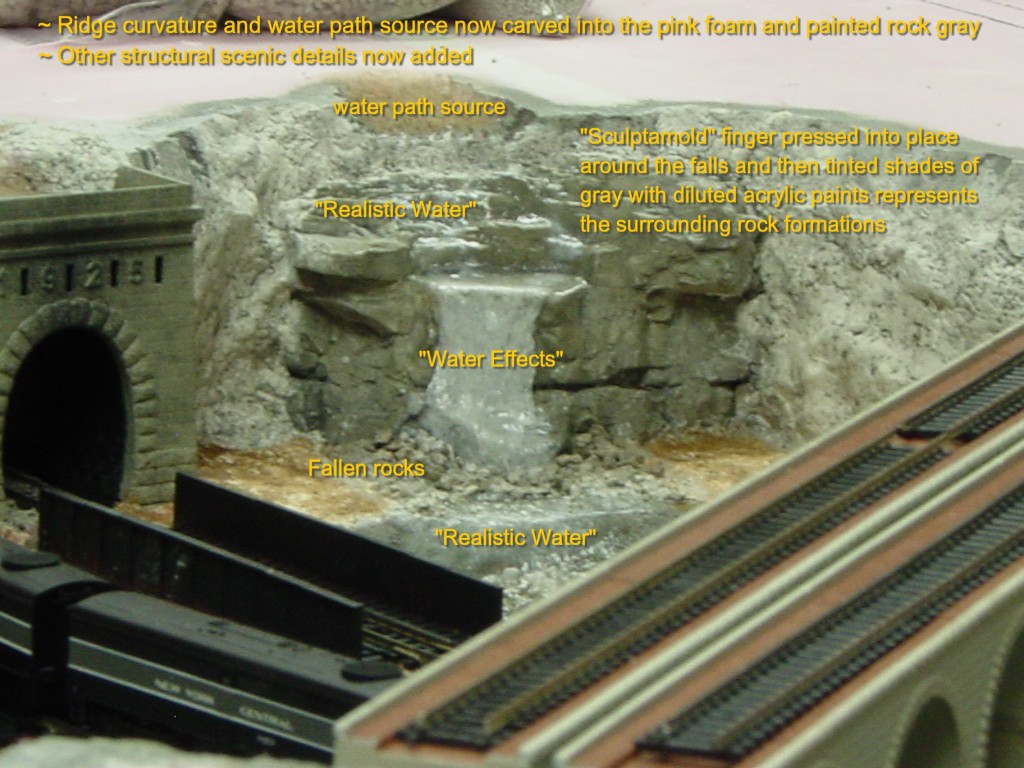 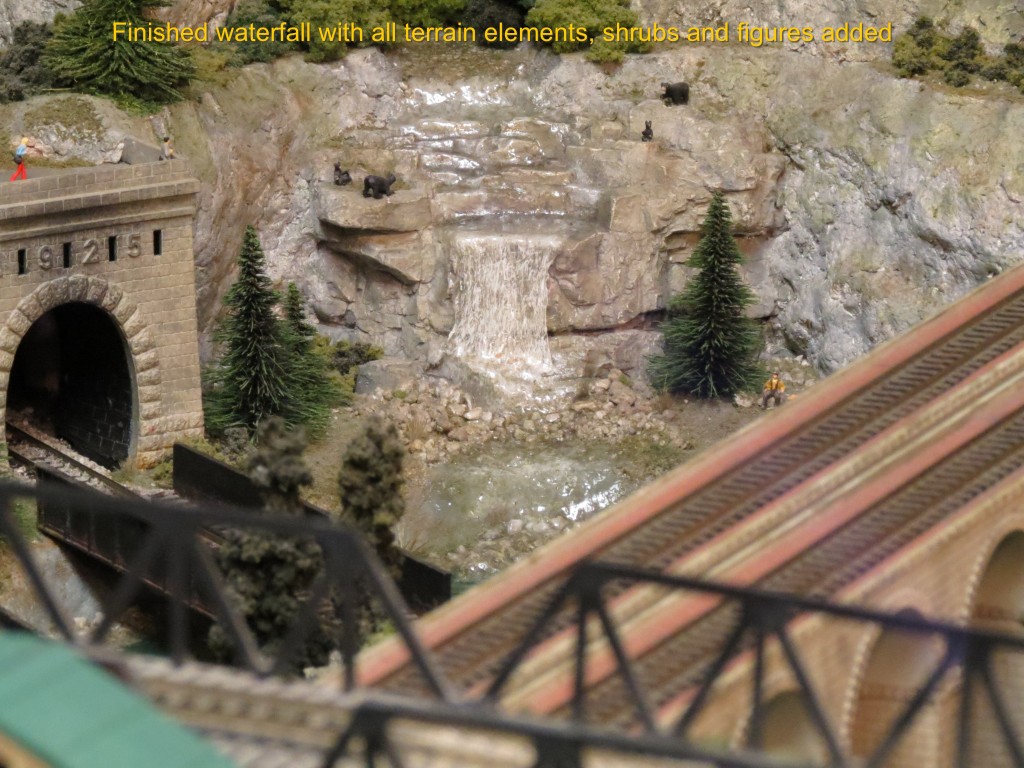 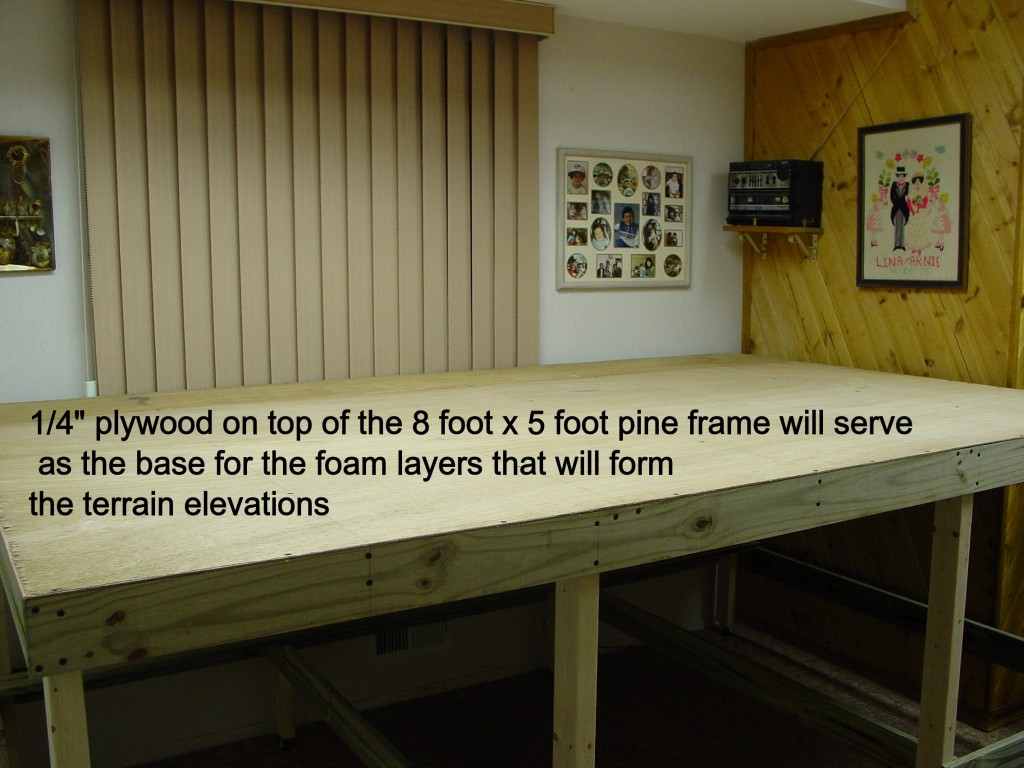 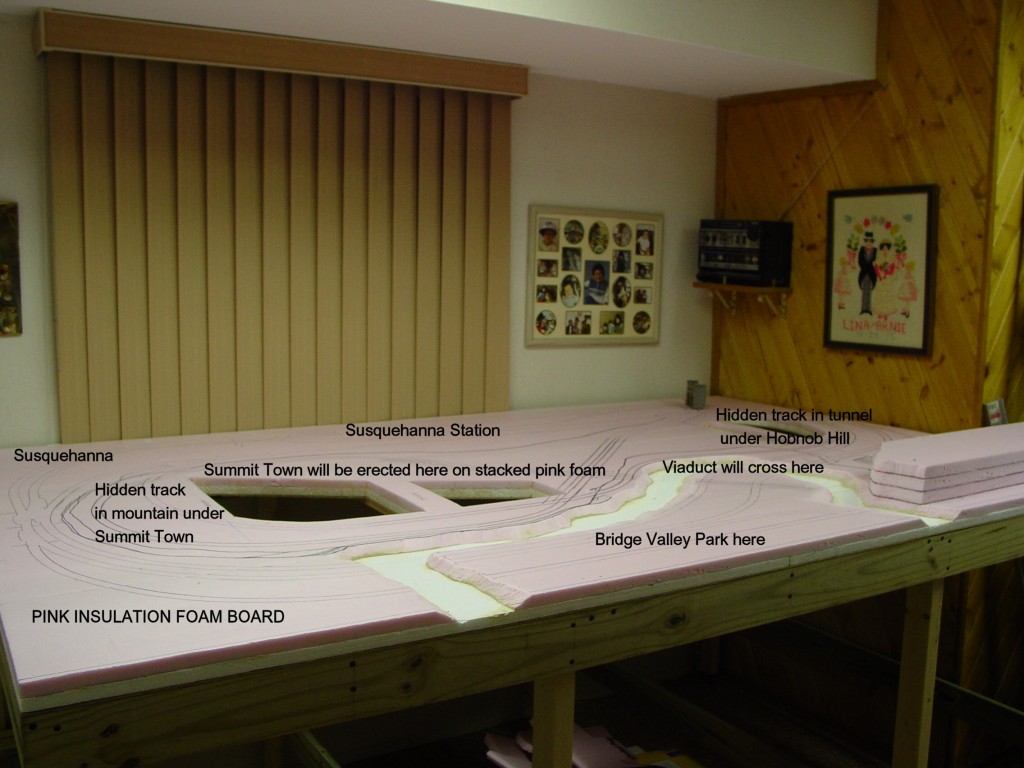 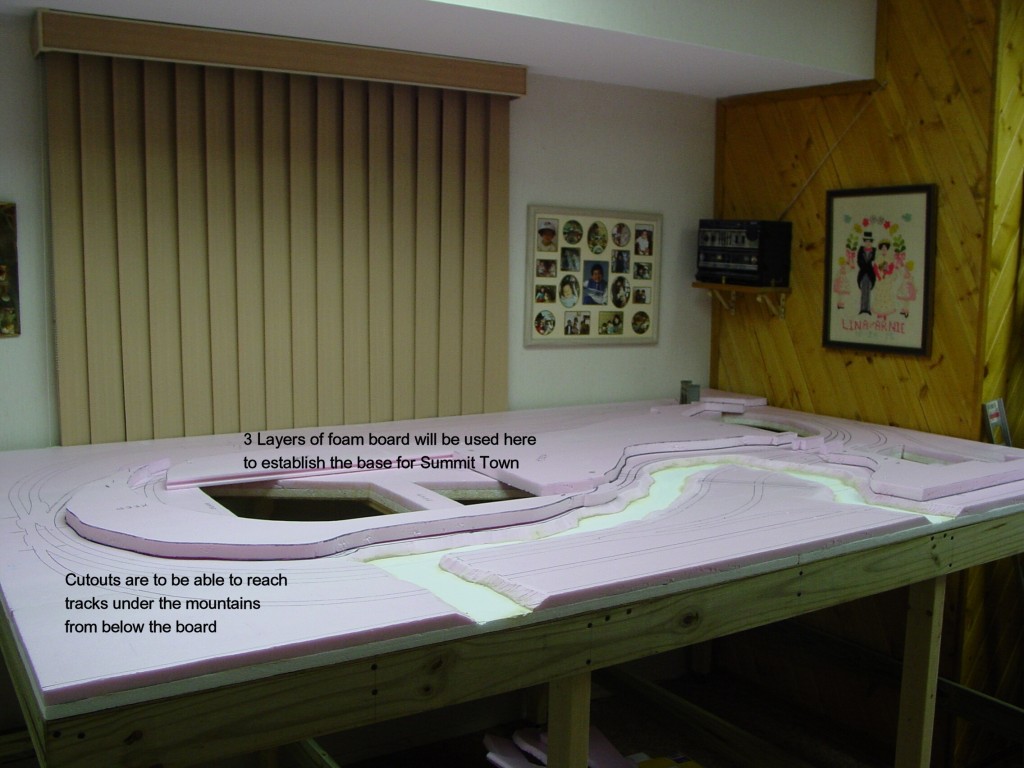 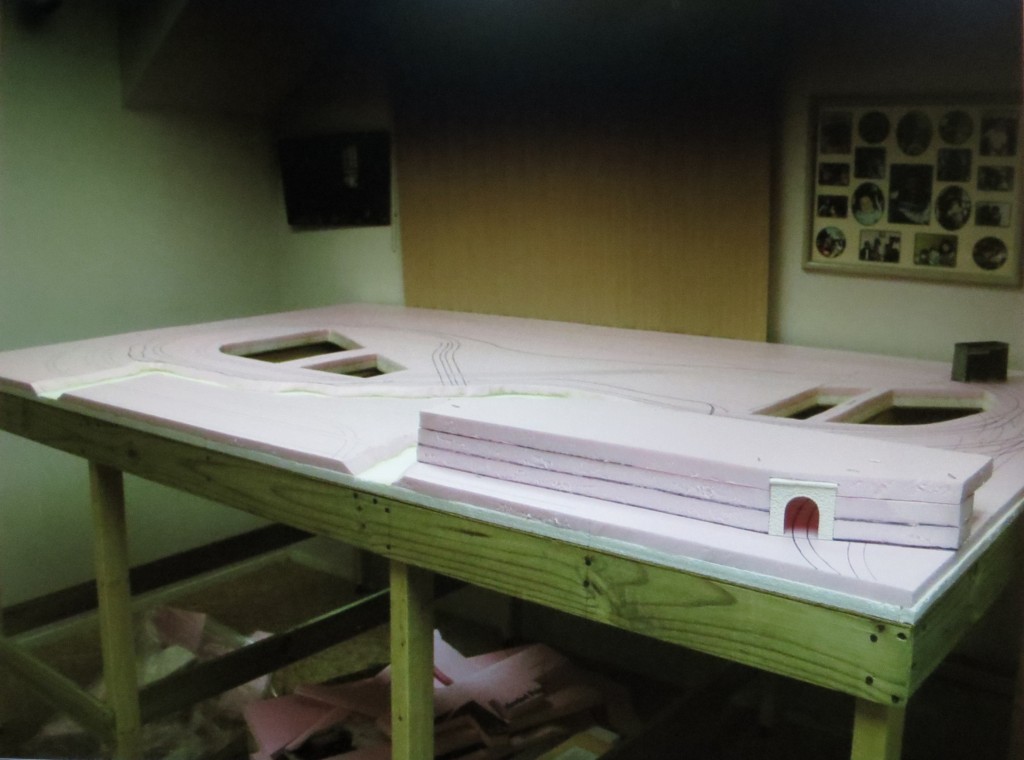 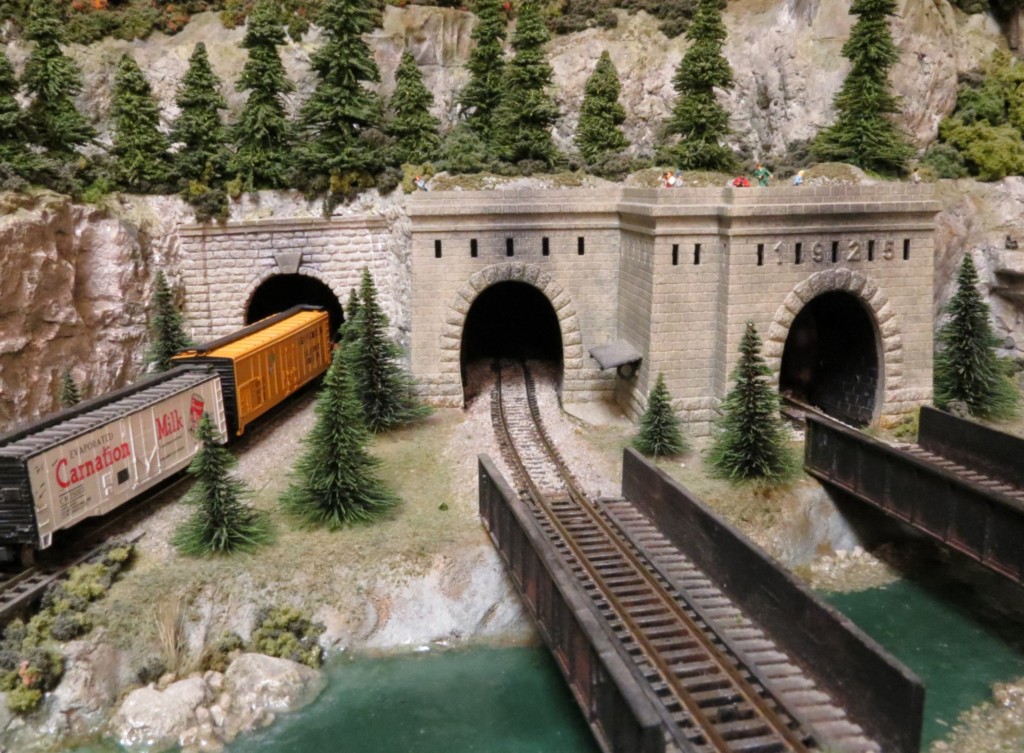 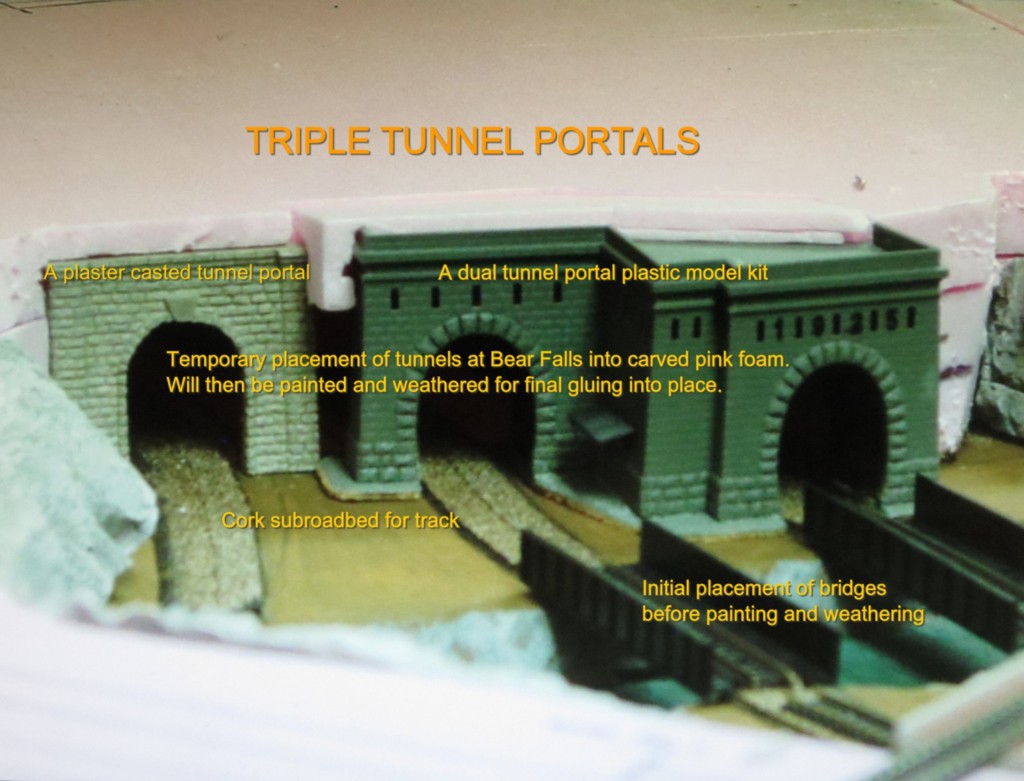 A huge, big, thank you to Arnie. An excellent ‘how to’ on making model railroad scenery.

Here’s another one on making tunnels.

And here’s one on inclines to make those mountains come alive.

Remember, you can click on the above images to make them bigger.

I look forward to all the scenery pics this is going to inspire!

And of course, there’s here too.

PS Looking for some of the print out scenery? It’s here.

45 Responses to How to make model railroad scenery