As you know layouts are always evolving and in that evolution challenges present themselves.

My original 4×6 HO layout expanded to 5×9 which was all that could be done in a 9×11 room. So I moved everything to a larger room and expanded it again to about 9×10 (the first picture).

I got everything the way I wanted with a roundhouse, turntable, and larger station. The problem was all the turnouts. They are all Atlas and there is know positive way to know which way it is turned without physically looking at the switches.

I saw a video on how to use red and green LEDs on a control panel to indicate the status of a turnout. To do that kind of thing with Atlas would require using Atlas relays. Looking at the expense I decided to try using a Tortoise switch motor to operate an Atlas turnout and have LEDs on the control panel and it worked.

So I took the plunged and decided to convert to all Tortoise motors for my turnouts and redo my control panel using DPDT toggle switches.

The first challenge was to add the Tortoise to the existing turnouts. It required drilling from under the layout to access the operating arm. It was tricky getting the operating rod fed into the slide bar but once in the Tortoise worked fine and I got my indicator LEDs working.

The next Challenge came when I used one DPDT switch to operate both Tortoise motors for a crossover. Because the motors were both working at the same time in parallel, there was too much voltage for the LEDs. I burnt two sets before I decided to search online about using Tortoise motors and LEDs for crossovers. I needed to add a resistor. Now the crossover LEDs are working.

The third challenge was to get to three turnouts to cut off the excess operating rod ( picture 2). The three turnouts are on the left of the picture. The turnout closest to the turntable I can reach. 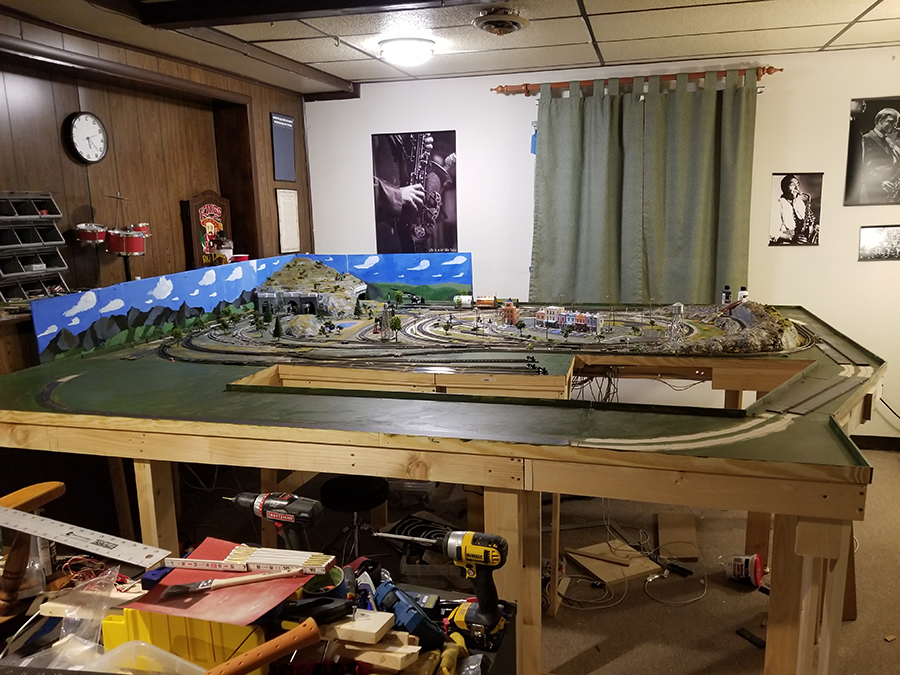 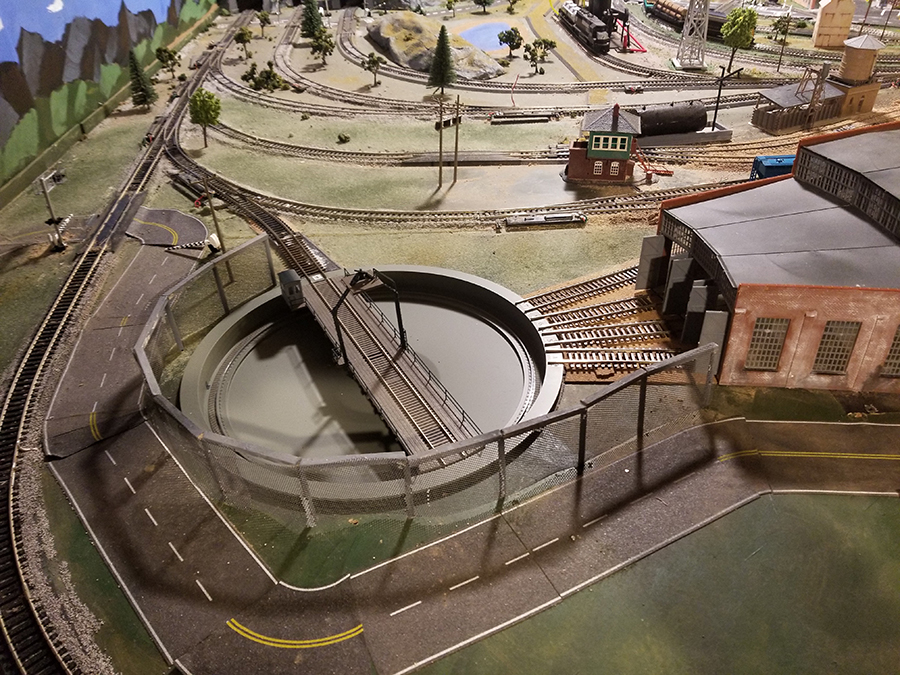 To gain access to the turnouts I decided to create a bridge. Because of the fence around the turntable, the trackwork, and trees, I couldn’t just lay a board across. So I got a 2’x4’ 3/4in piece of plywood, cut it to 14in by 48in, and cut eight blocks out of a 2×4 about 3in long and placed them on the layout between the trackwork. 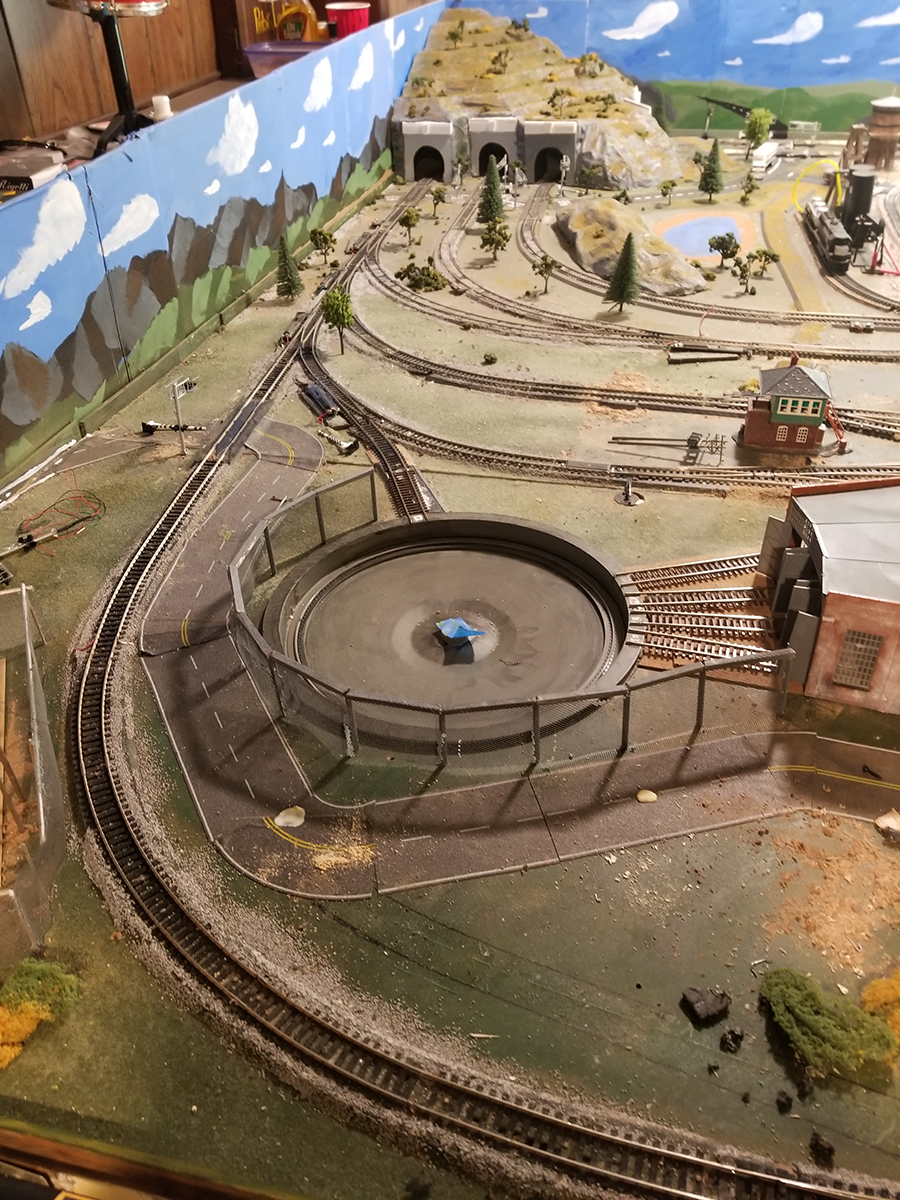 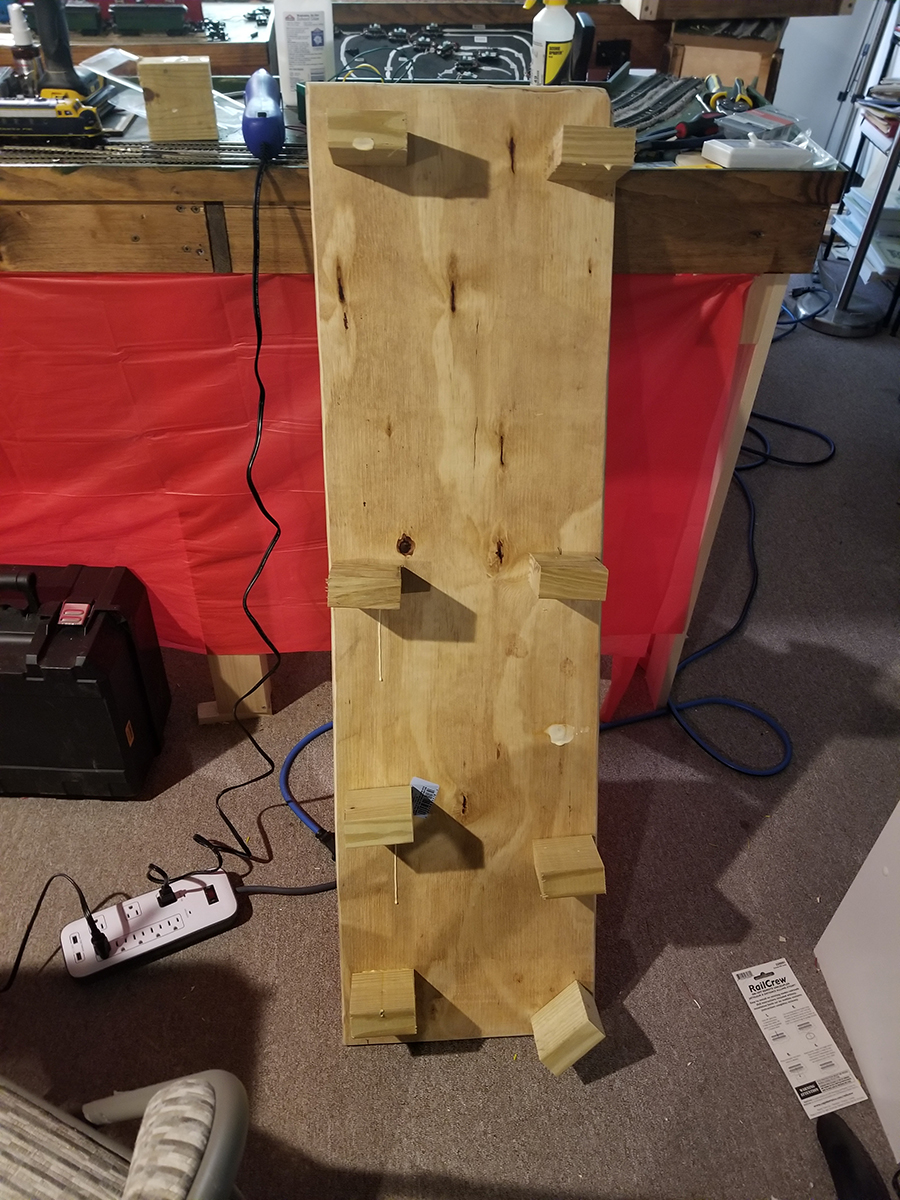 The picture shows the plywood bridge in place ready to use. The layout is sturdy to begin with and the plywood bridge distributes the load to eight points. When I get all of the turnout motors replace and have my new control panel I will send an update. Maybe even post a video. 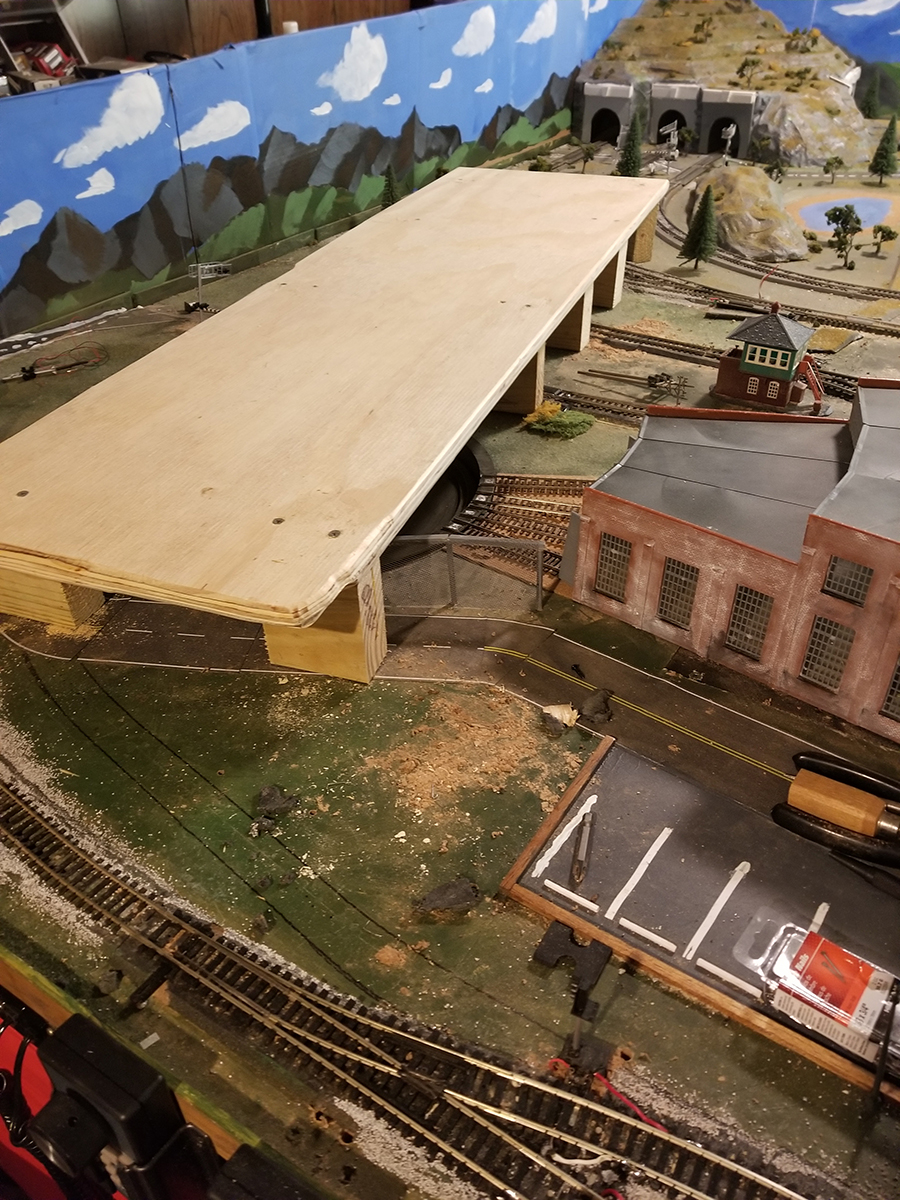 The picture shows my current control panel. The three circles highlight the DPDT switches I use to control two turnouts and on crossover.

I decided that I would build a whole new panel and put it in place when I was ready. I bought a 2’x4’ piece of 3/16 Masonite, usually you see it with a bunch of holes that you can use to hang things. I also wanted to keep the work under the payout to a minimum.

I took a piece of scrap particle board and cut a 3/16 groove in it and stood my 14in x 24in panel board in the groove and screwed two pieces of scrap alongside of the panel to keep it upright. 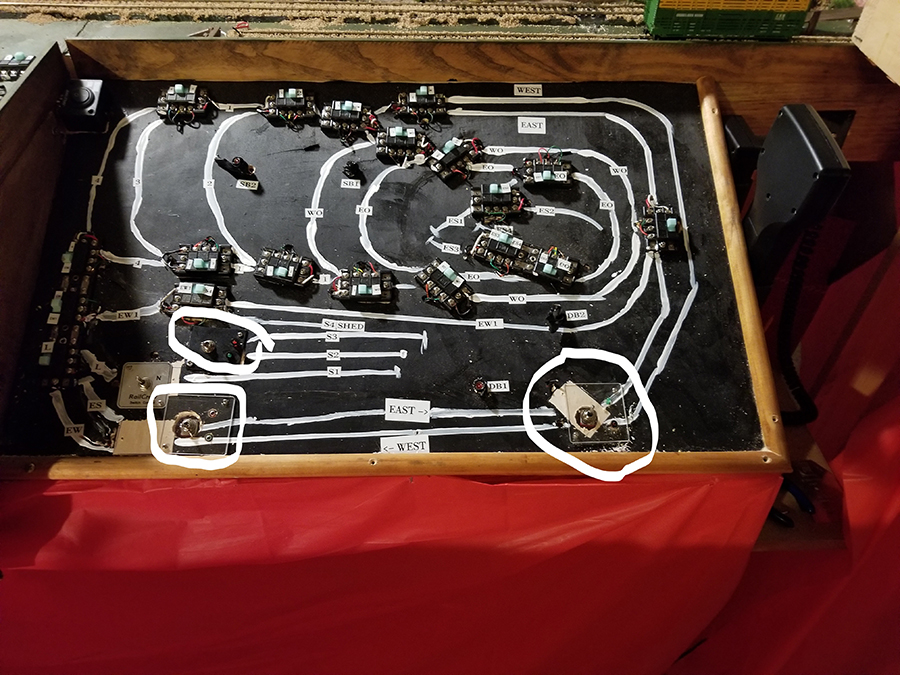 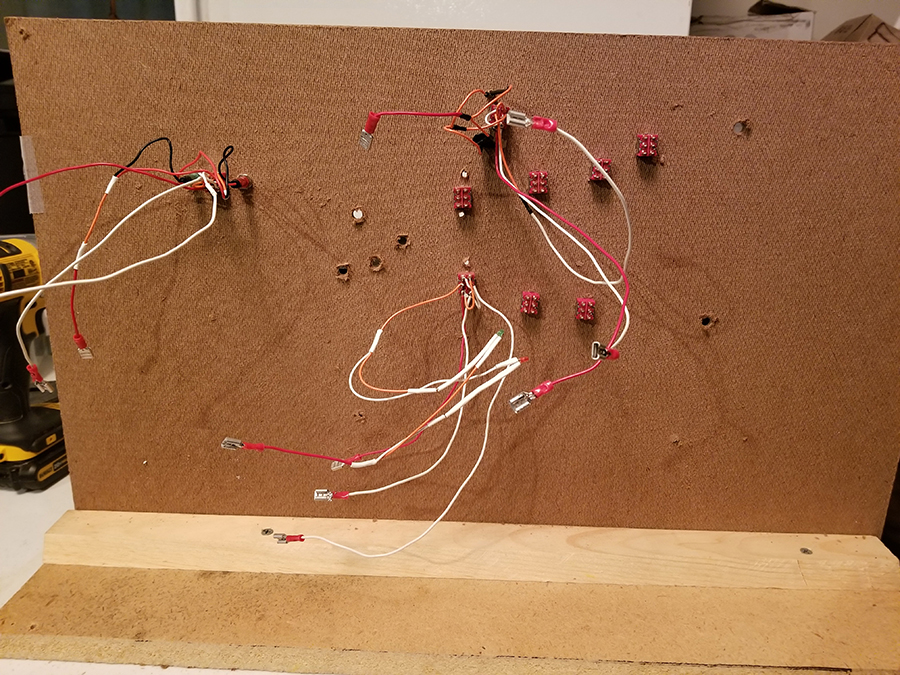 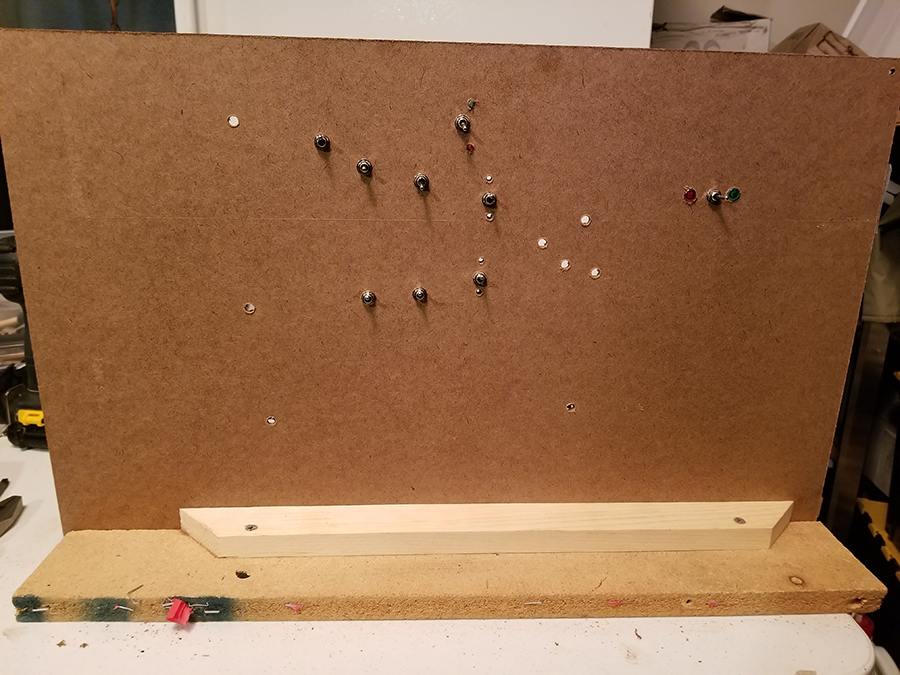 Now I can work on the control panel sitting at a work table. I am using quick connects on the wiring so when I put the new panel in place I can ad quick connects to the existing wiring and plug everything together.

A huge thanks to Bob. Some very clever stuff going on there.

If you want to catch up on Bob’s pevious post, it’s here.

That’s all for today folks – please do keep ’em coming, it’s all getting a bit thin on the ground this end.

And don’t forget the Beginner’s Guide is here if you want to stop dreaming and start doing.

PS Have you had a look at the latest ebay cheat sheet yet?.