Bill’s been back in touch with his N scale track layout:

It’s been about a year since you heard from me about my n gauge layout. If you’ll remember it’s called Gerskyville. Its come a long way of just would and styrofoam.

Theres shots of unfinished areas yet.

Along the long backside will be two arched bridges on each end leading to a 3 foot by 4 foot yard.

I’m not good at story telling so that’s up to you. All the layout was built, painted and assembled by myself , I purchased no already finished biuldings.

The race track on the layout is built after a track in indiana that my whole family raced at, up untill they closed down. Broadway speedway, the fastest track on earth.

How you all enjoy. 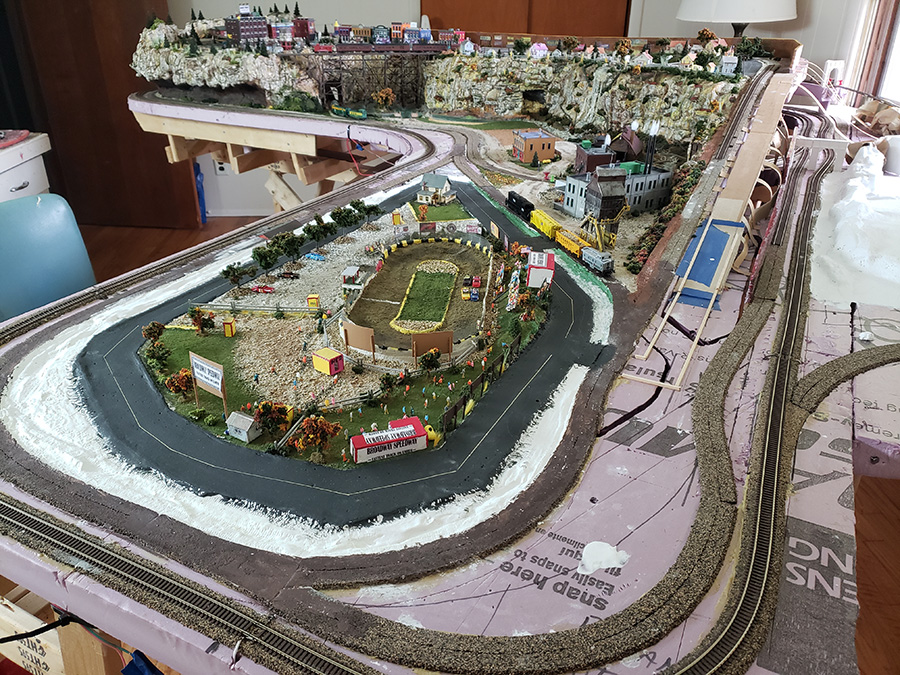 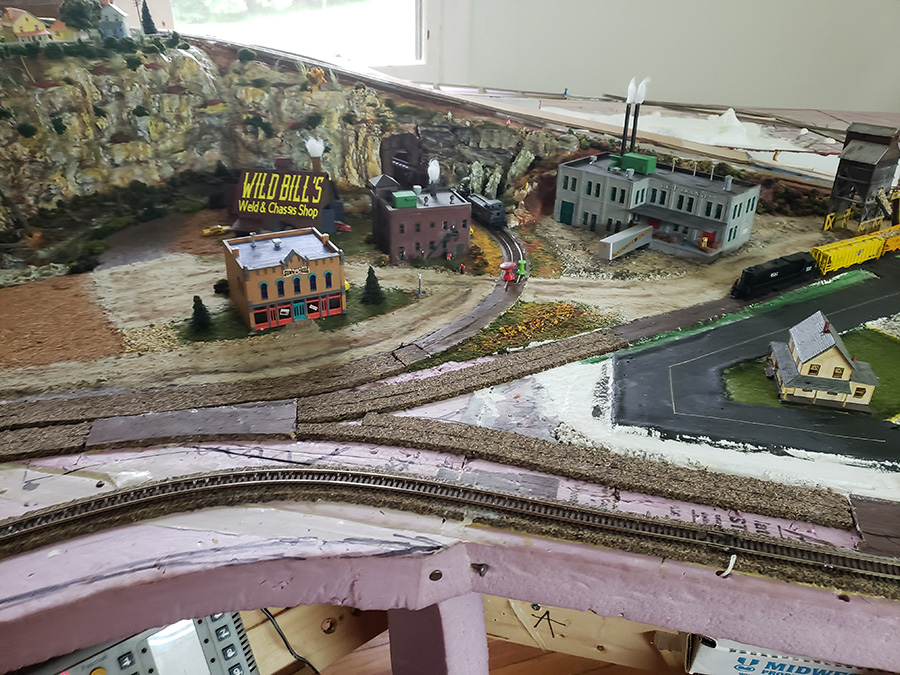 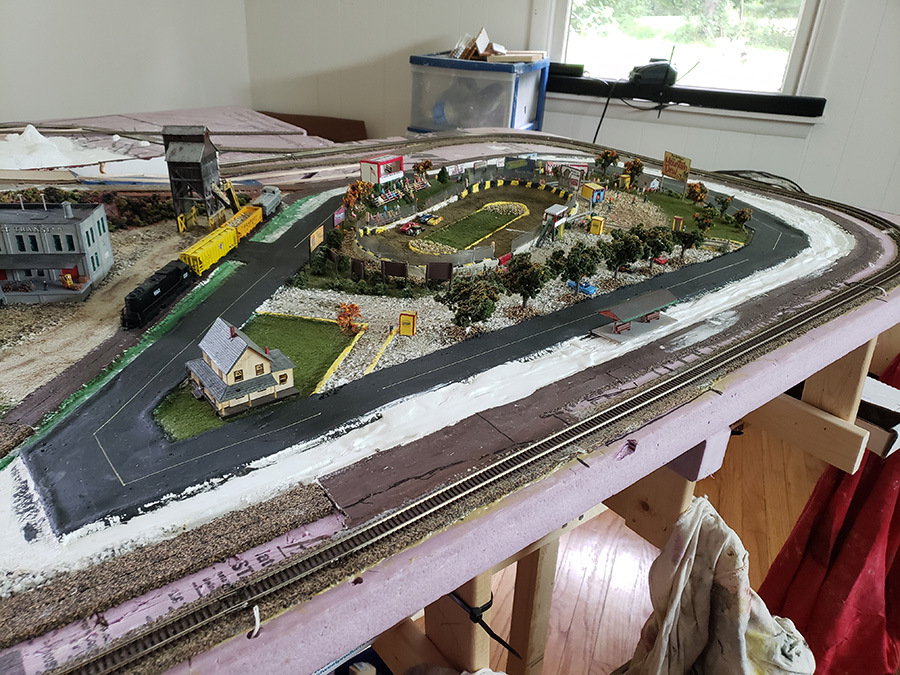 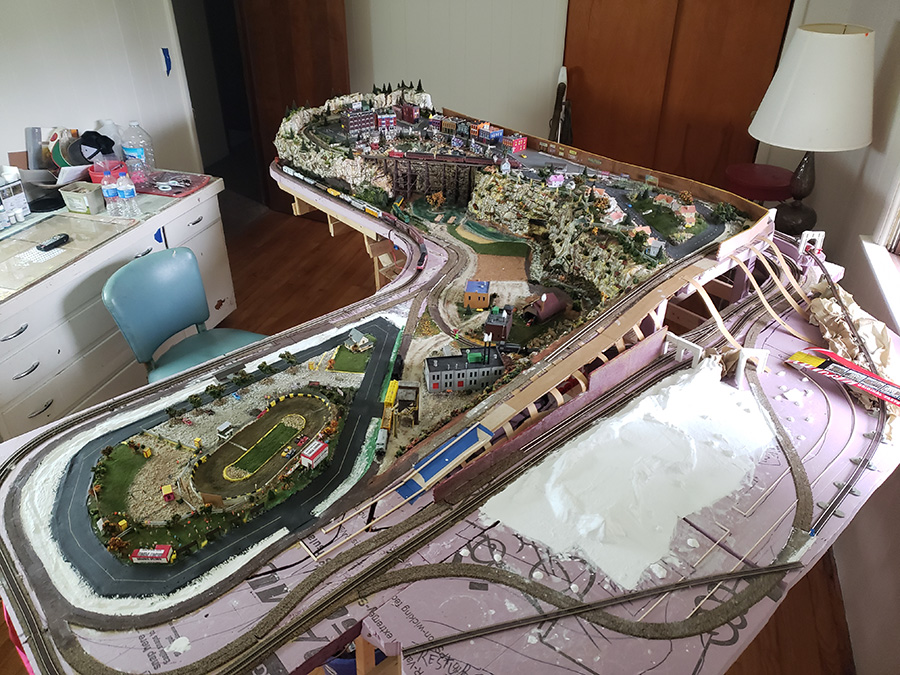 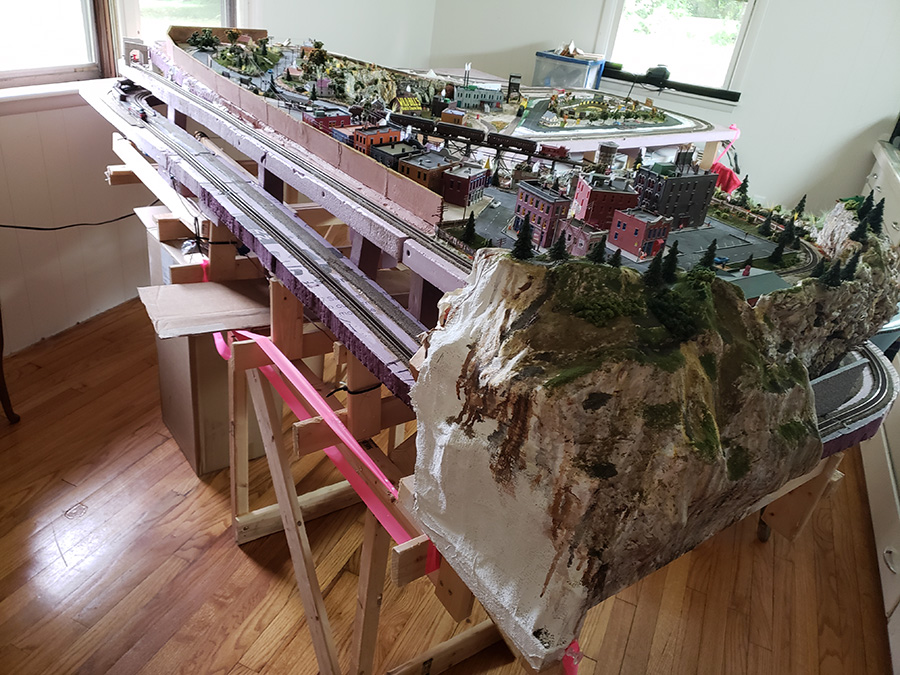 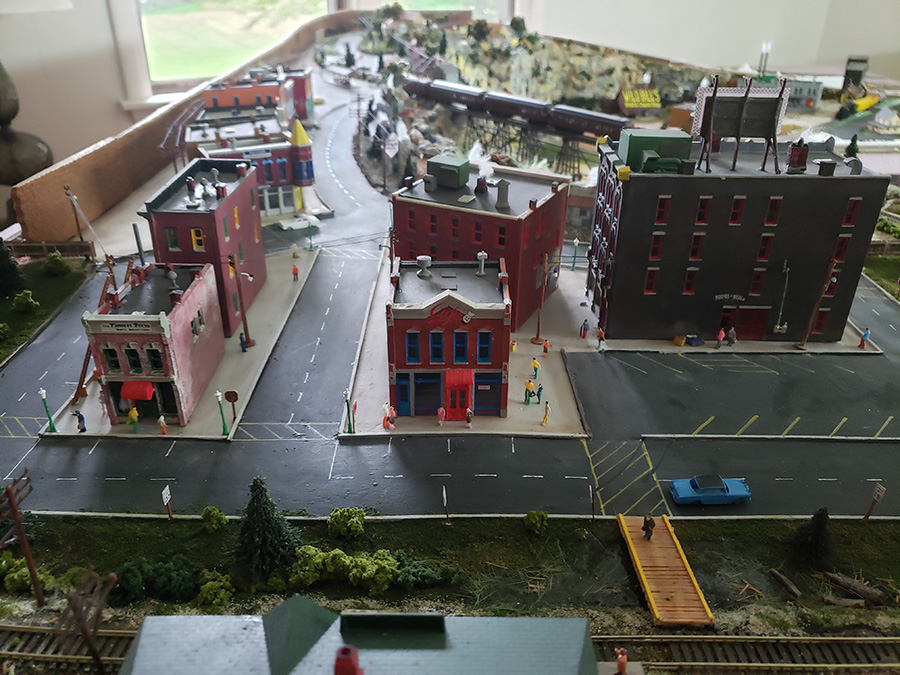 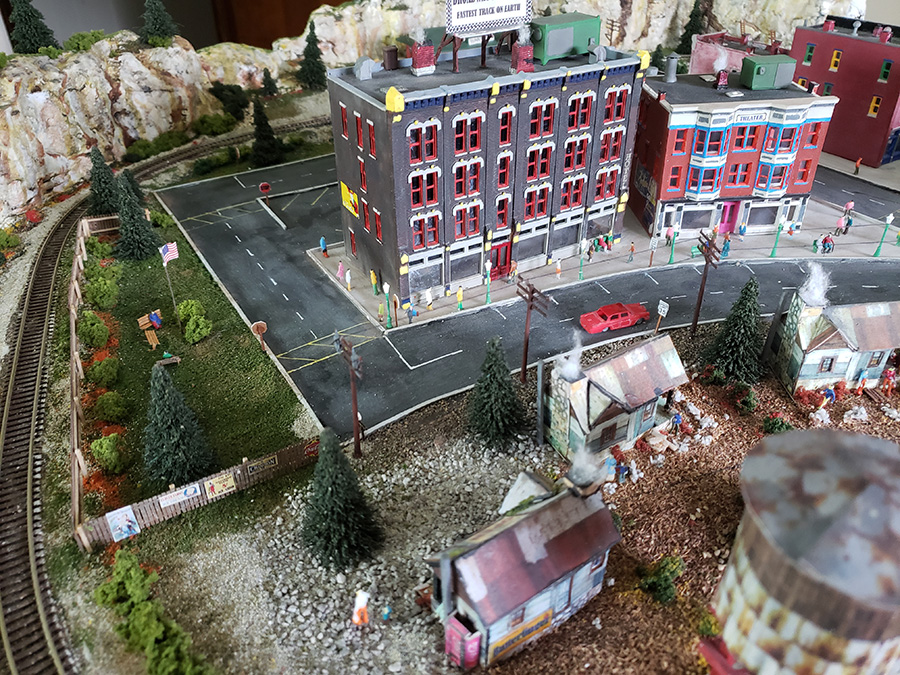 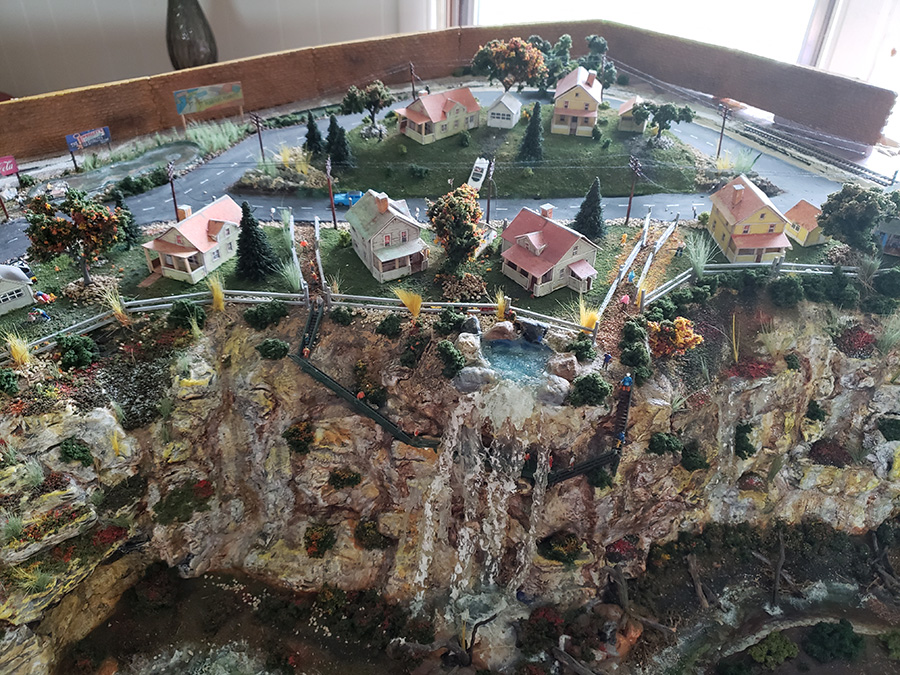 A big thanks to Bill for sharing his N scale track layout.

And if you want to see just how much Bill’s layout has come along, his last post is here.

I’ve been lurking on your emails for a while, and thought I should send you a taste of what I’ve been working on – a fictional layout in a much-too-small space that sorta represents the railway line between Barchester and Winter Overcotes in the Angela Thirkell novels.

It is set in the late 40’s, probably, so there might be some BR stuff along with GWR and even some LSWR and Southern stuff with varying degrees of run-down-ness.

I’m located in California so that I have to get all the stock from eBay or the various mail-order stores. This picture is of an ancient Hornby 14xx pulling a couple of 4-wheel kit coaches with the interior roughly modeled and painted and with an assortment of figures sitting in it.

If you are interested I’ll send some other pics. 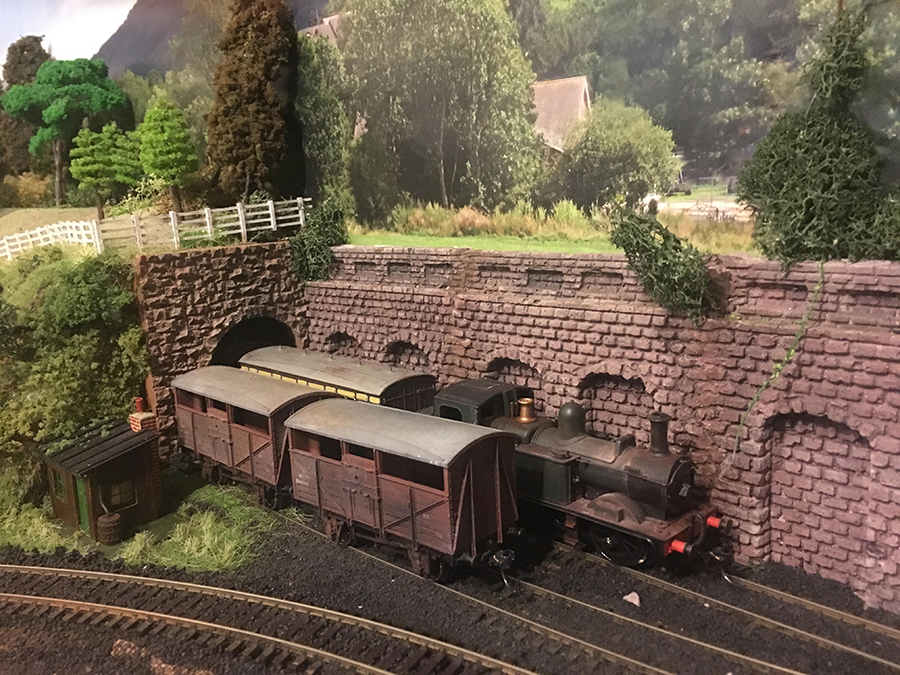 Now on to some behind the scenes news:

Pretty much, every week, I get emails asking, “Why do you show so many American layouts?”

And I get just as many saying, “Why do you show so many British layouts?”

Well, the truth is, I’m not fussy – I don’t give a jot where they come from, what their theme is, or their era.

If there’s something to learn from them, or marvel at, I publish.

But I know what folk mean – have a look at these two for example. Polar opposites when it comes each side of the Atlantic:

Polar opposites… but some real gems of wisdom.

But sometimes, no layout is necessary to tap in to some sage advice. Have a look at the comments in this one:

So there you go – oh, and one last thing. I also get mails everyday asking why I don’t publish the scale / gauge / track plan of some layouts. It’s all very simple: I publish everything I get. If I don’t have it, I can’t publish it.

If the posts have got your creative juices flowing, don’t forget the Beginner’s Guide is here.