I am sending updates to my HO layout.

Some changes are forced on us. When my Son and Daughter-In-Law saw my layout they sent me a Walther’s Passenger Platform. I told them Thanks now I’ll have to get passenger cars. The only place I could see adding a station required me to rework my roads. Before the station there was sort of wye intersection. I changed that to a “Tee” intersection and added the station.

Picture 1 is before the station. Picture 2 shows the Station. 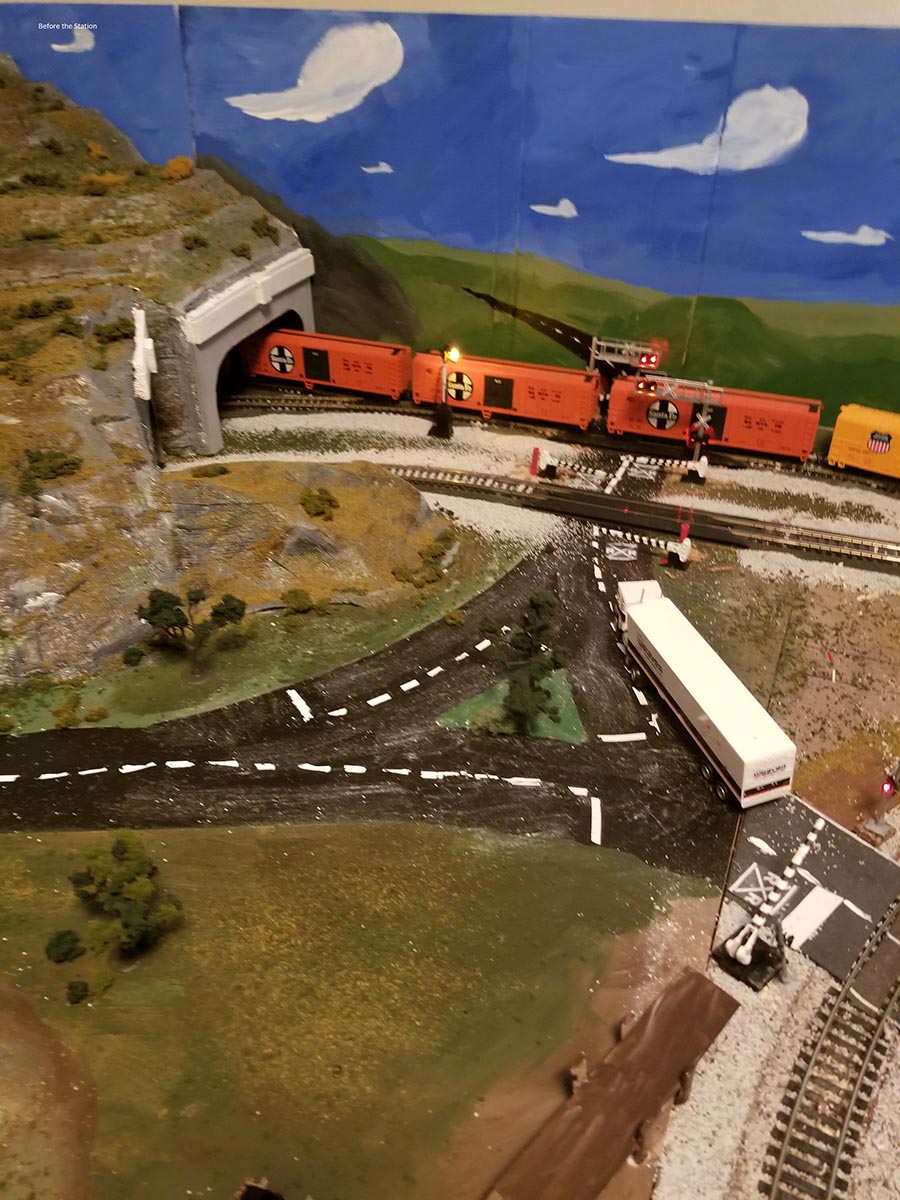 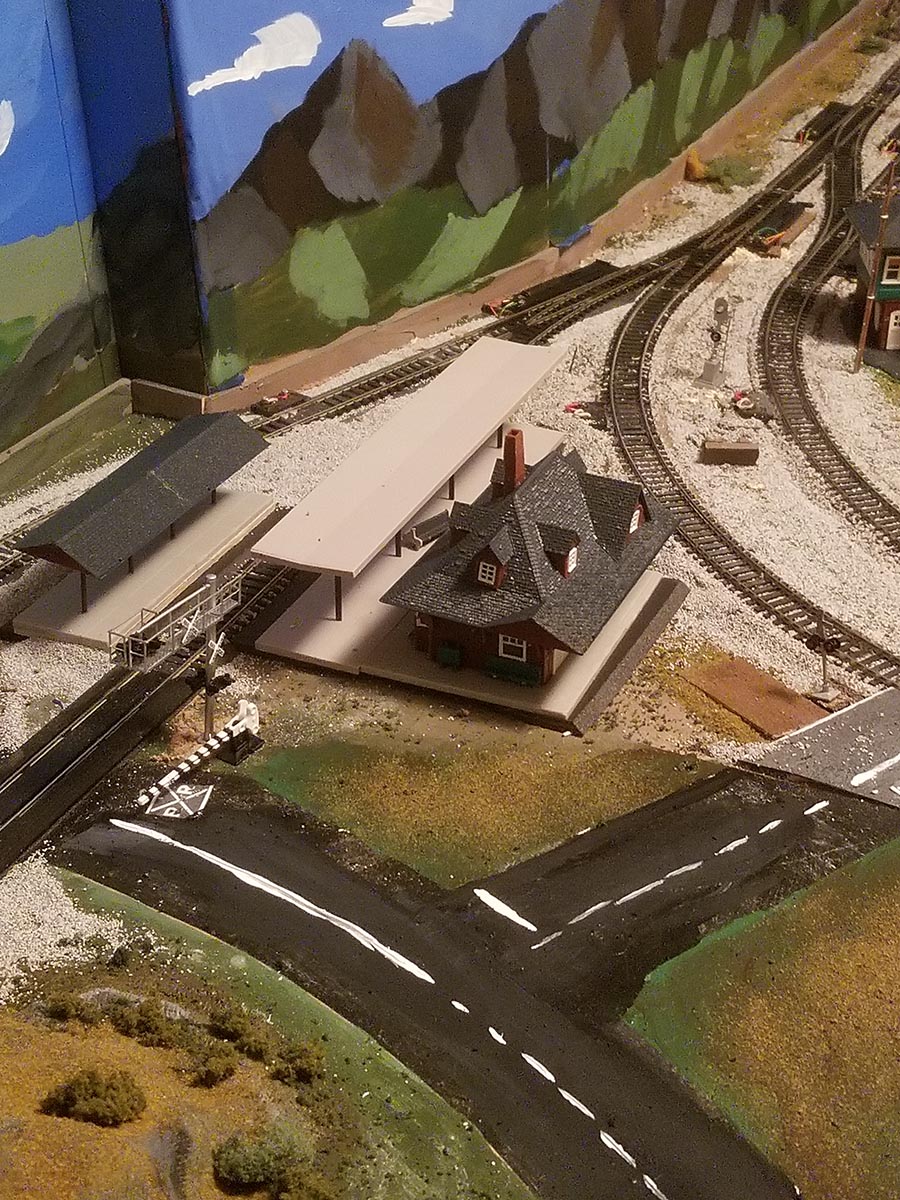 I decided to use the station to run an excursion, so I acquired two 1860 cars and 1860 steam engine.

Since it was going to be an excursion and not running all the time I needed a siding to store the excursion train. Since it is a wood burning steam engine I built a water tower and a wood shed for the siding to service the engine. The first picture shows the eight inch addition to the layout with the siding and the water tower.

The second picture shows the wood shed with the split and stacked logs. 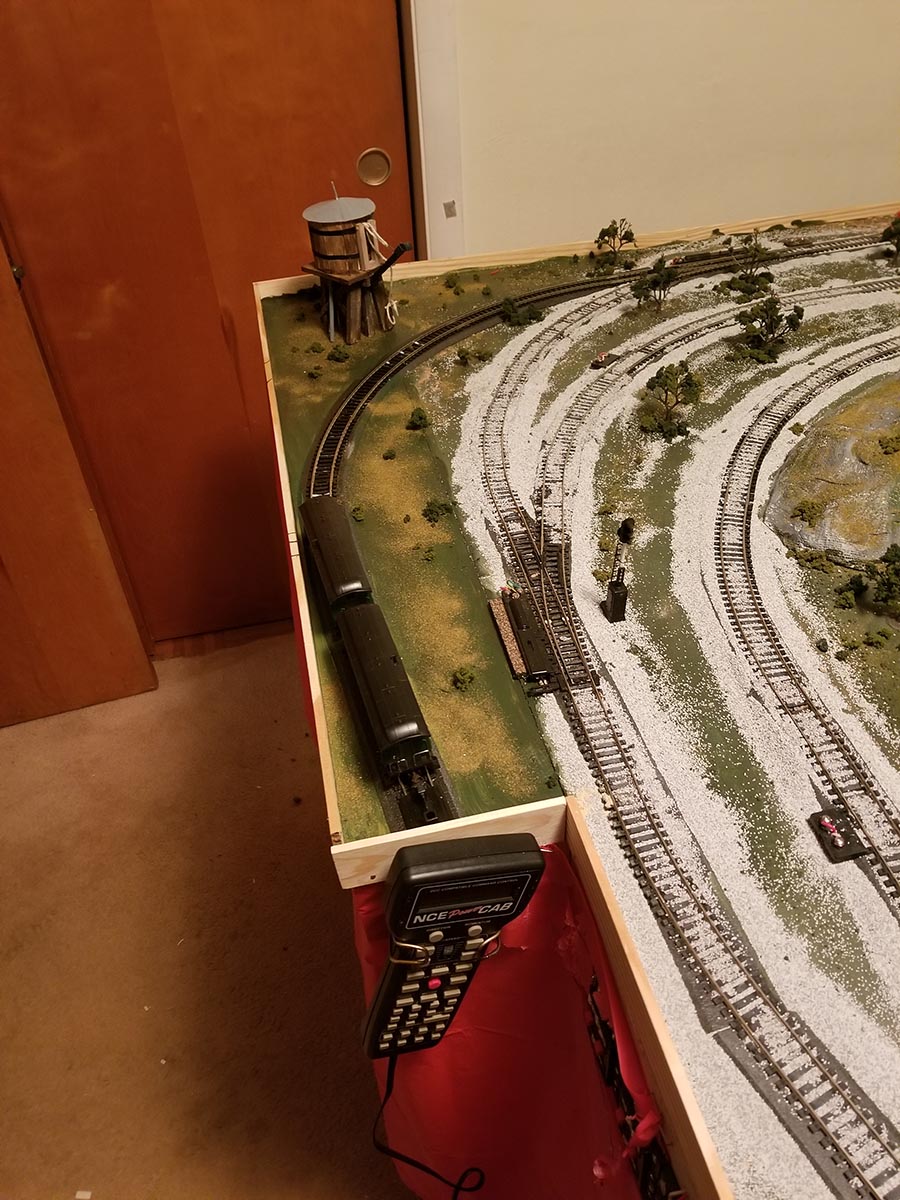 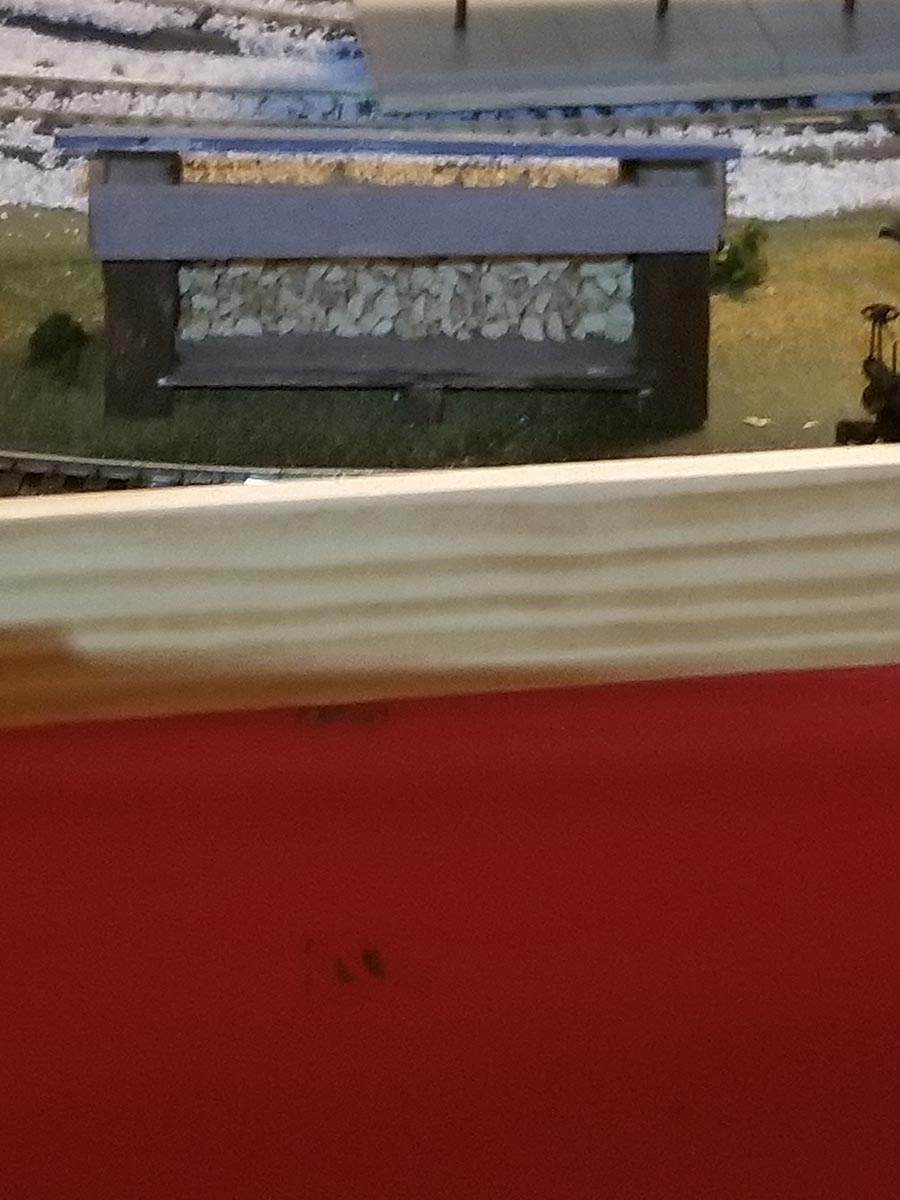 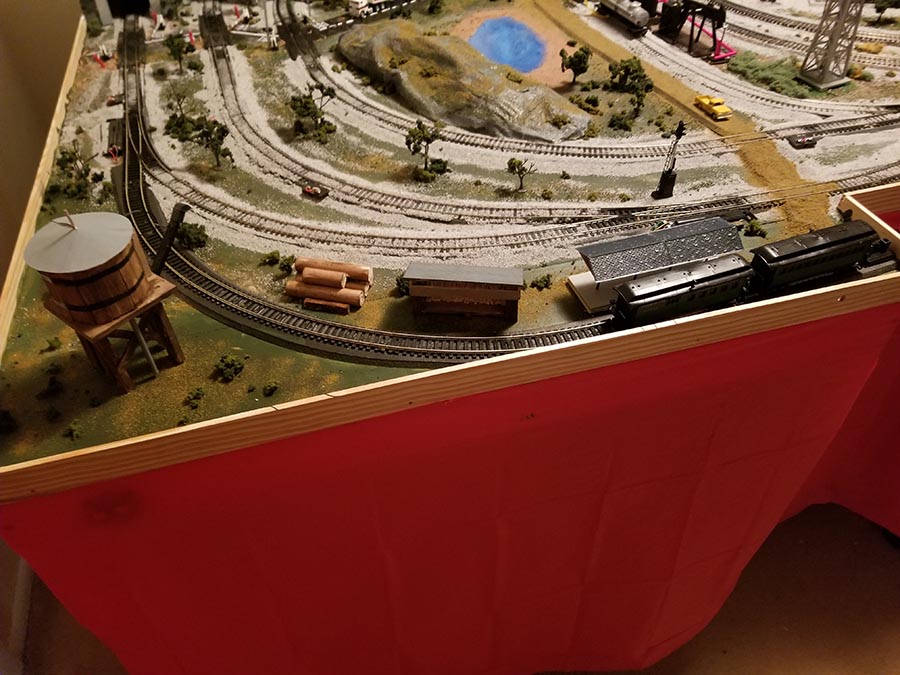 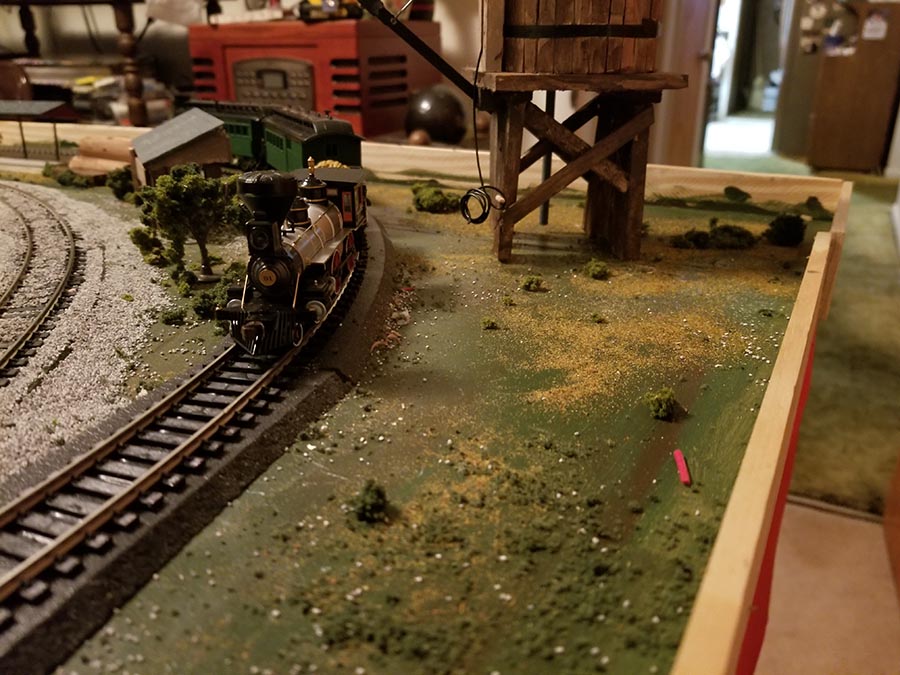 After completing the siding it looked like something was missing, so I expanded again. The first picture shows a passing siding connecting back to the main. Picture 2 shows the sidings and the switch controls. 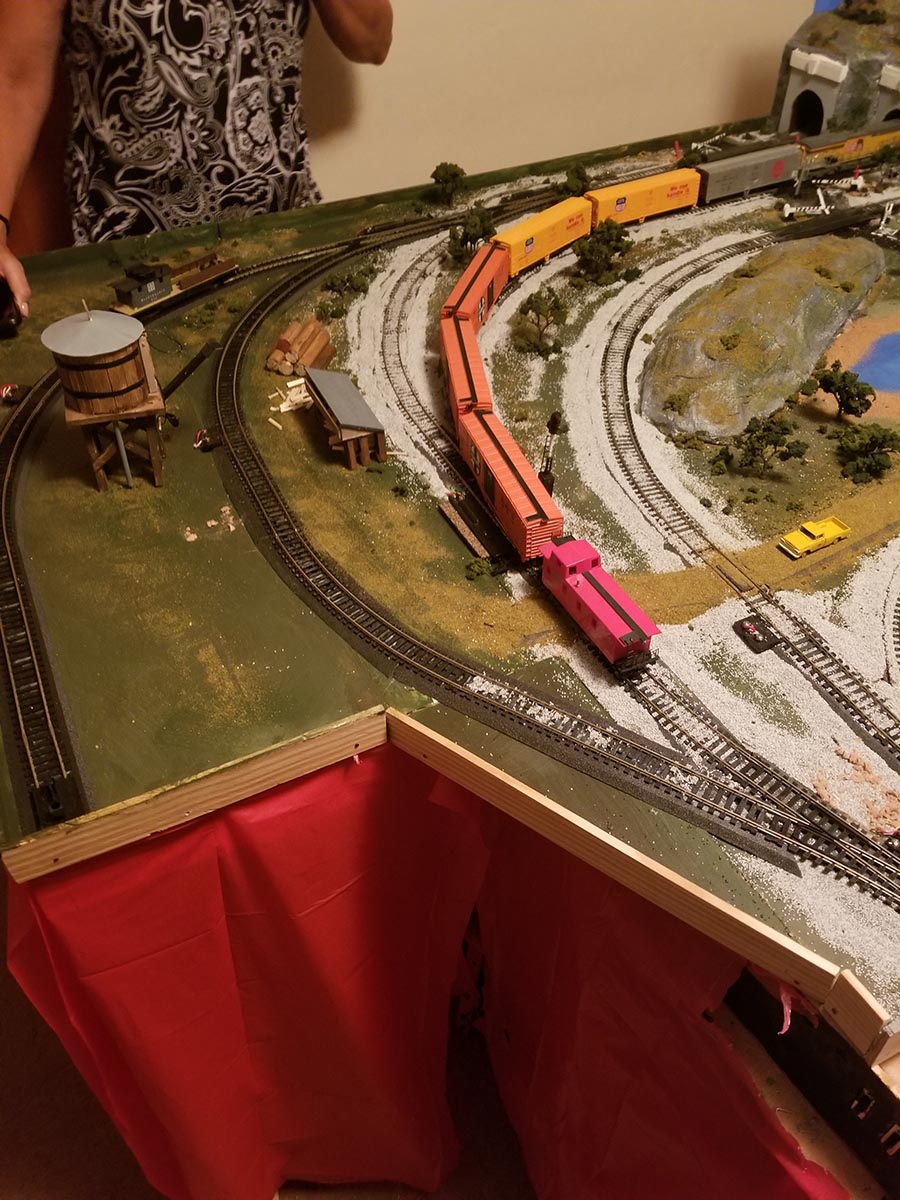 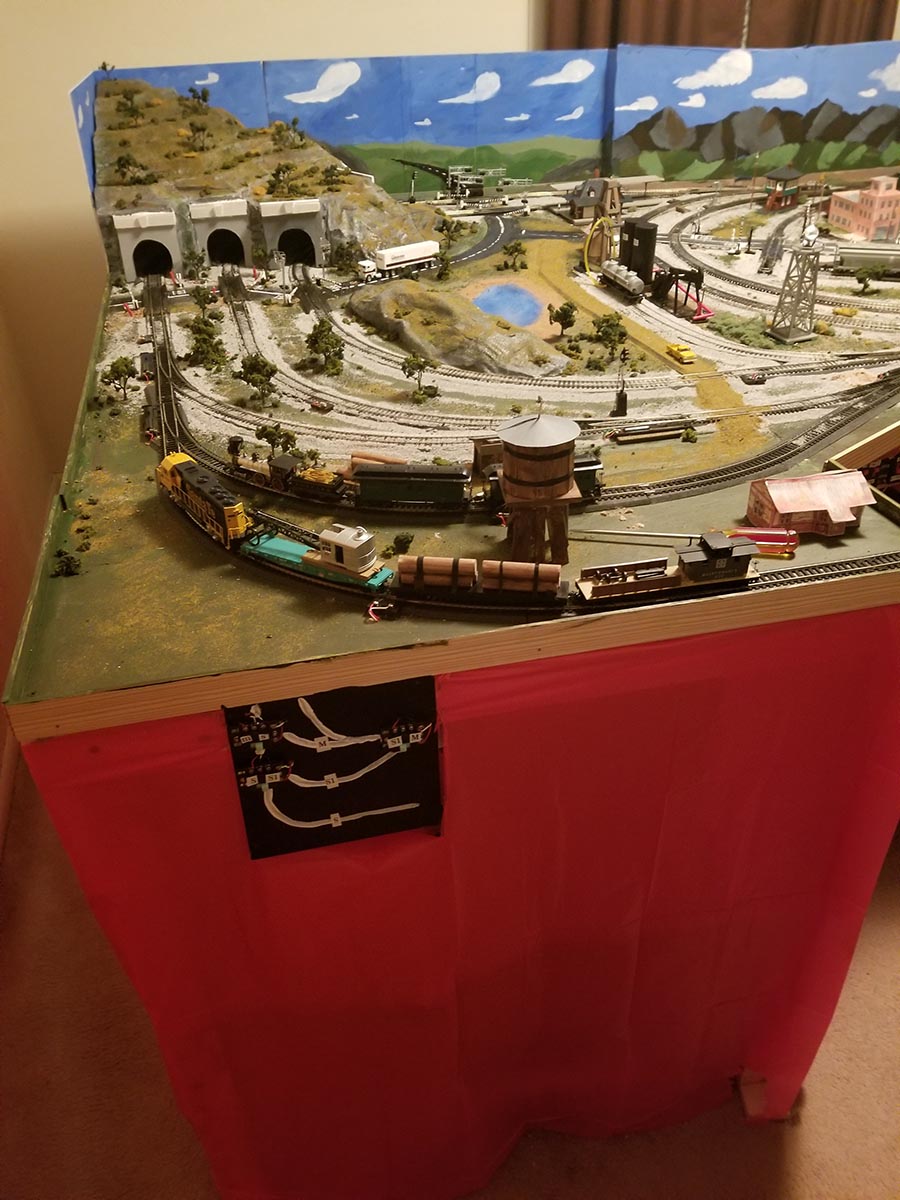 Always looking for more I decided to extend the first siding and make a ladder. Picture one shows the platform extended and the ladder in place. The second picture shows the extension painted. 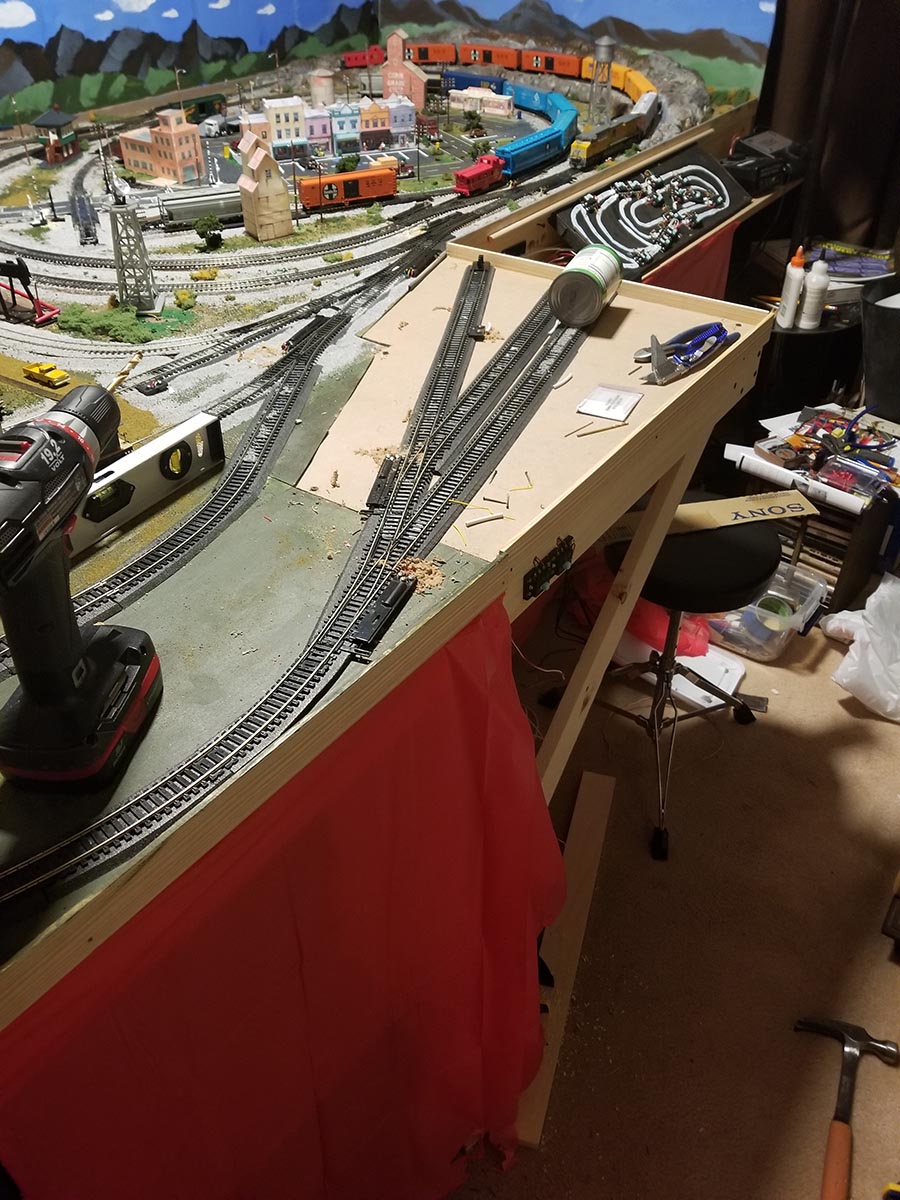 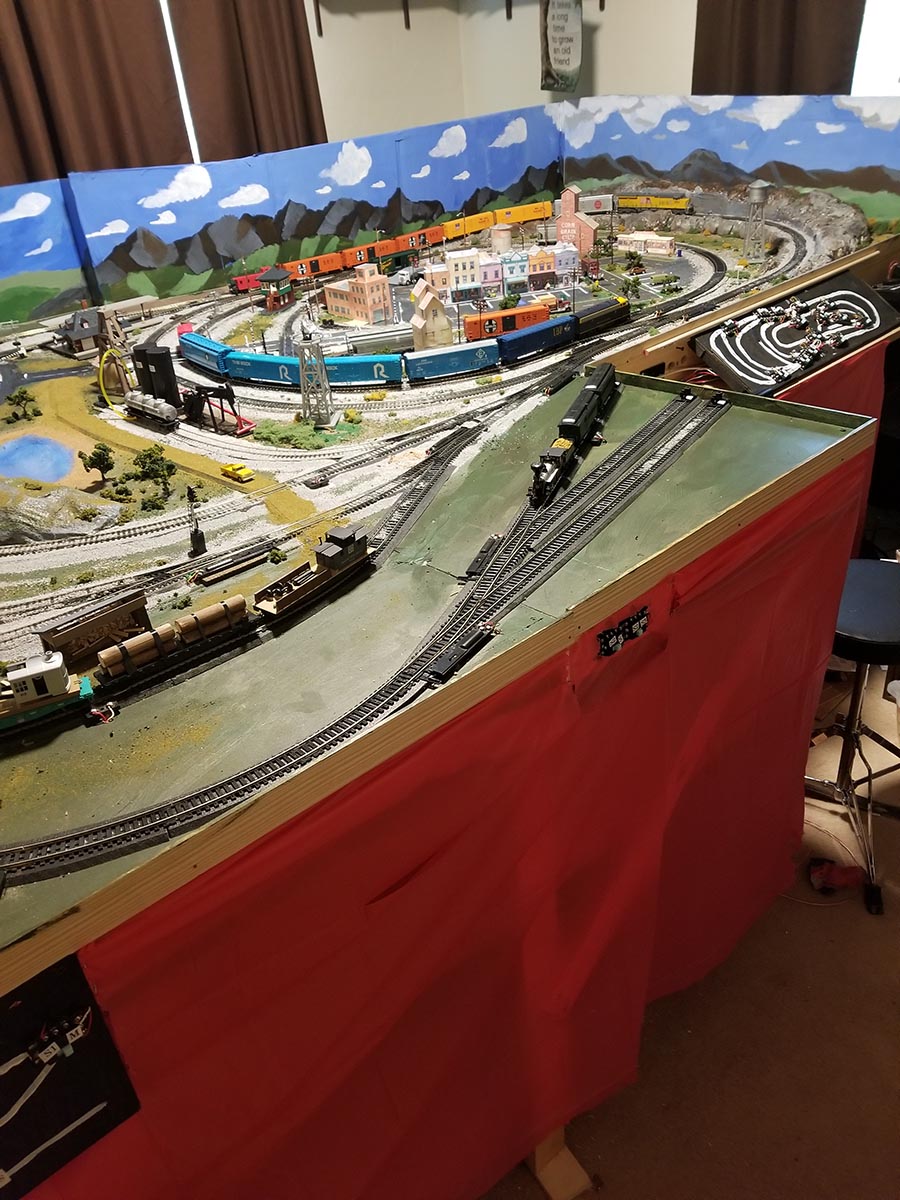 After extending the siding it still looked like something was missing, so I added a switch to the passing siding to give me three tracks on the ladder and a fourth track off the passing siding. The pictures show the result from two directions. 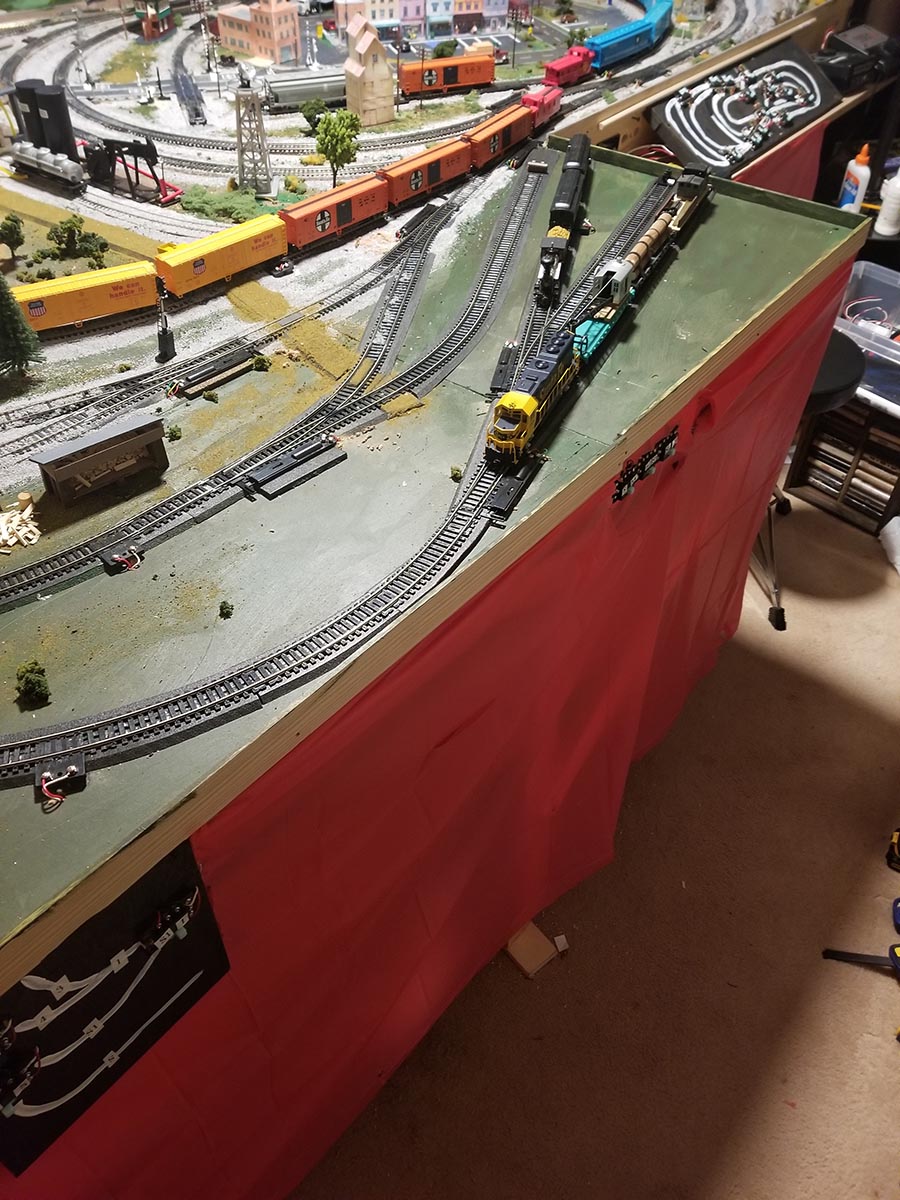 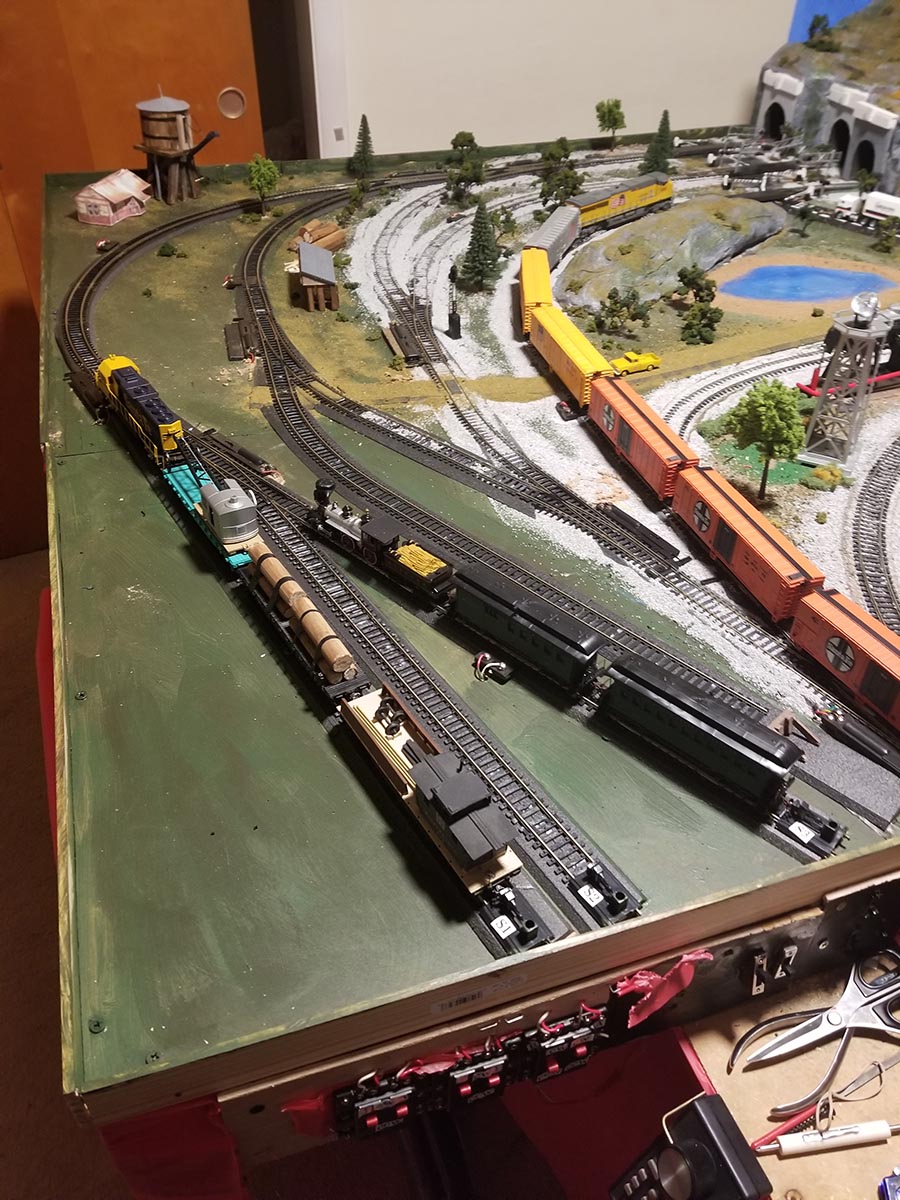 I can not expand or extend the layout any more and still be able to reach everything. After the recent discussions about kit bashing and scratch building I decided to try my hand at building a locomotive shed for one of the siding. I got out the balsa wood and framed up a shed based on a picture I had seen. The beginning is shown in picture one. Picture two shows the framework on one of the sidings. 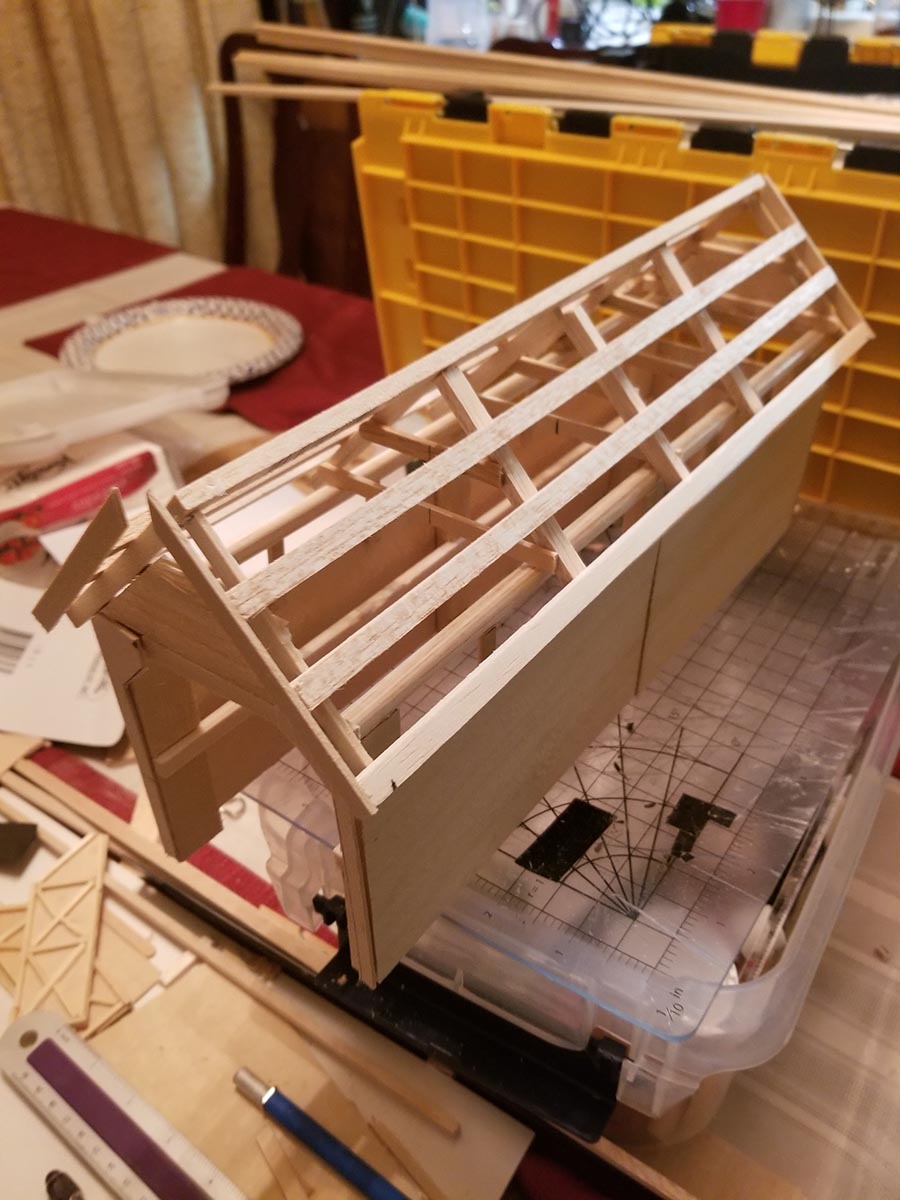 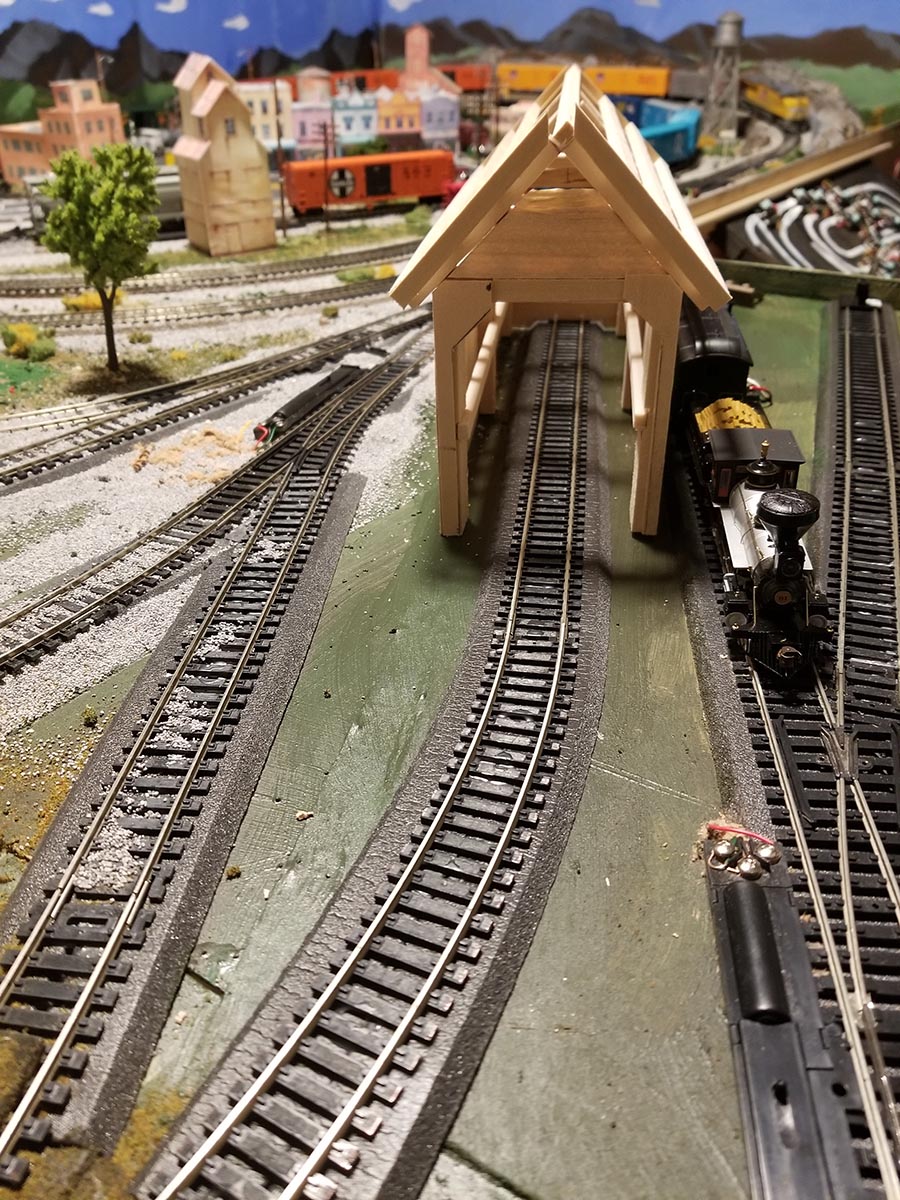 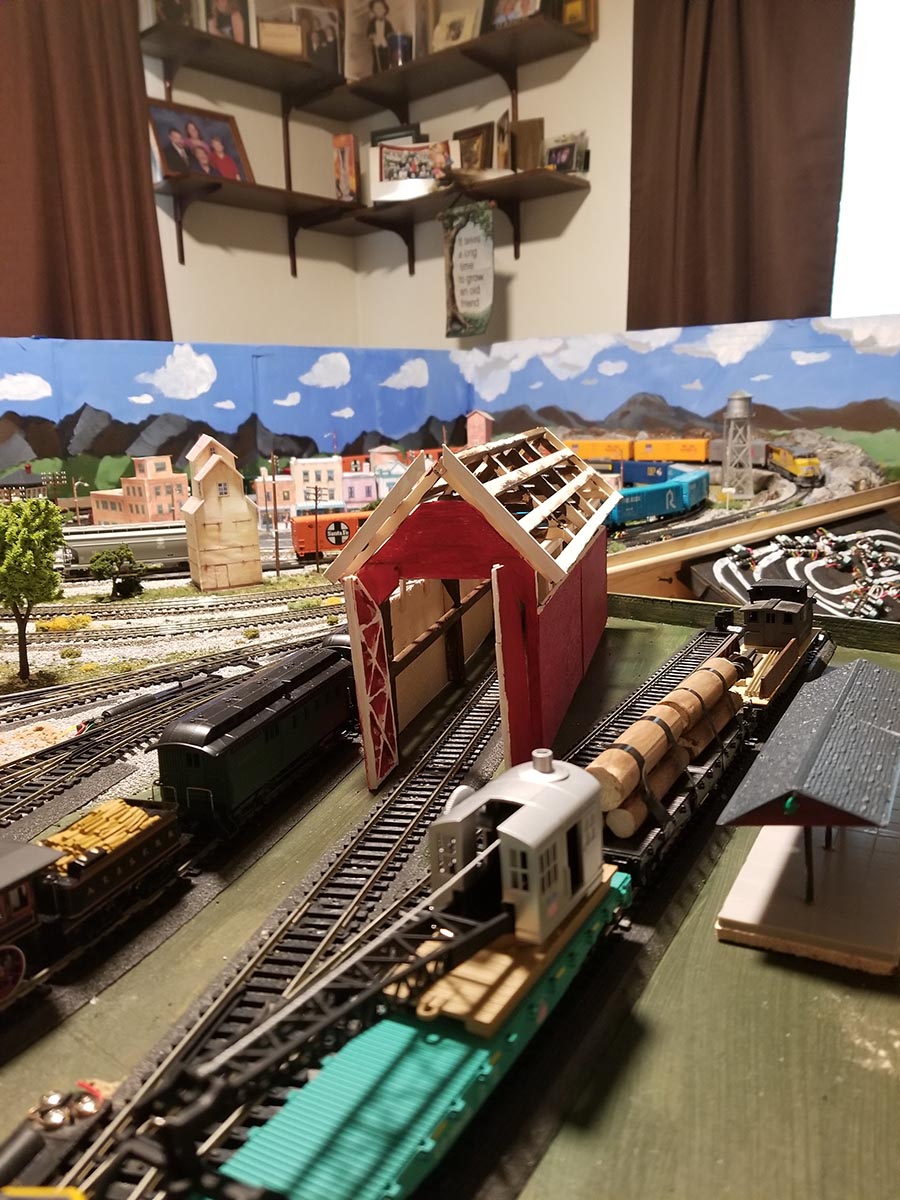 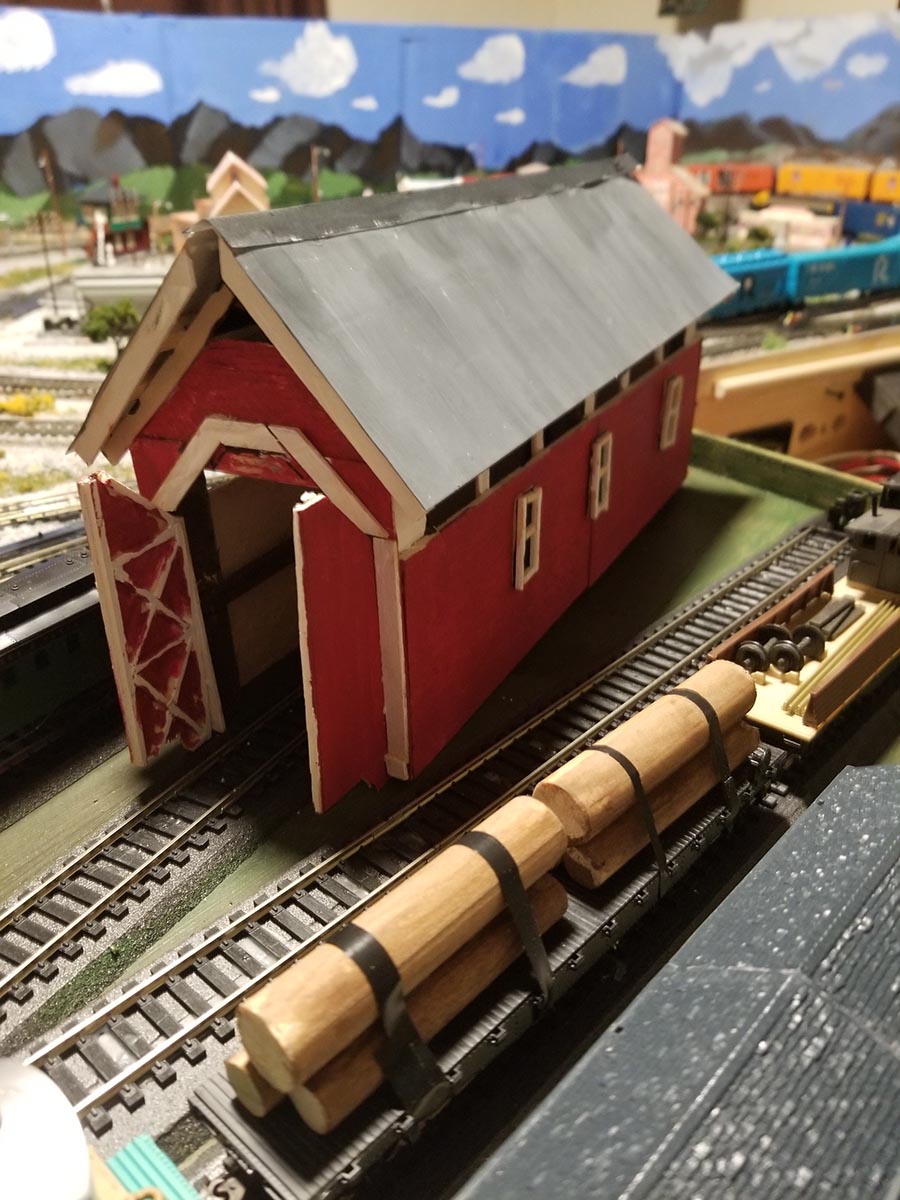 The final two pictures show the side of the shed and a front view with a locomotive in the shed.

That is all the updates for now. I planning on getting a 1940’s steam locomotive as my next acquisition but until then I will just be adding scenery to the layout and enjoying run trains. 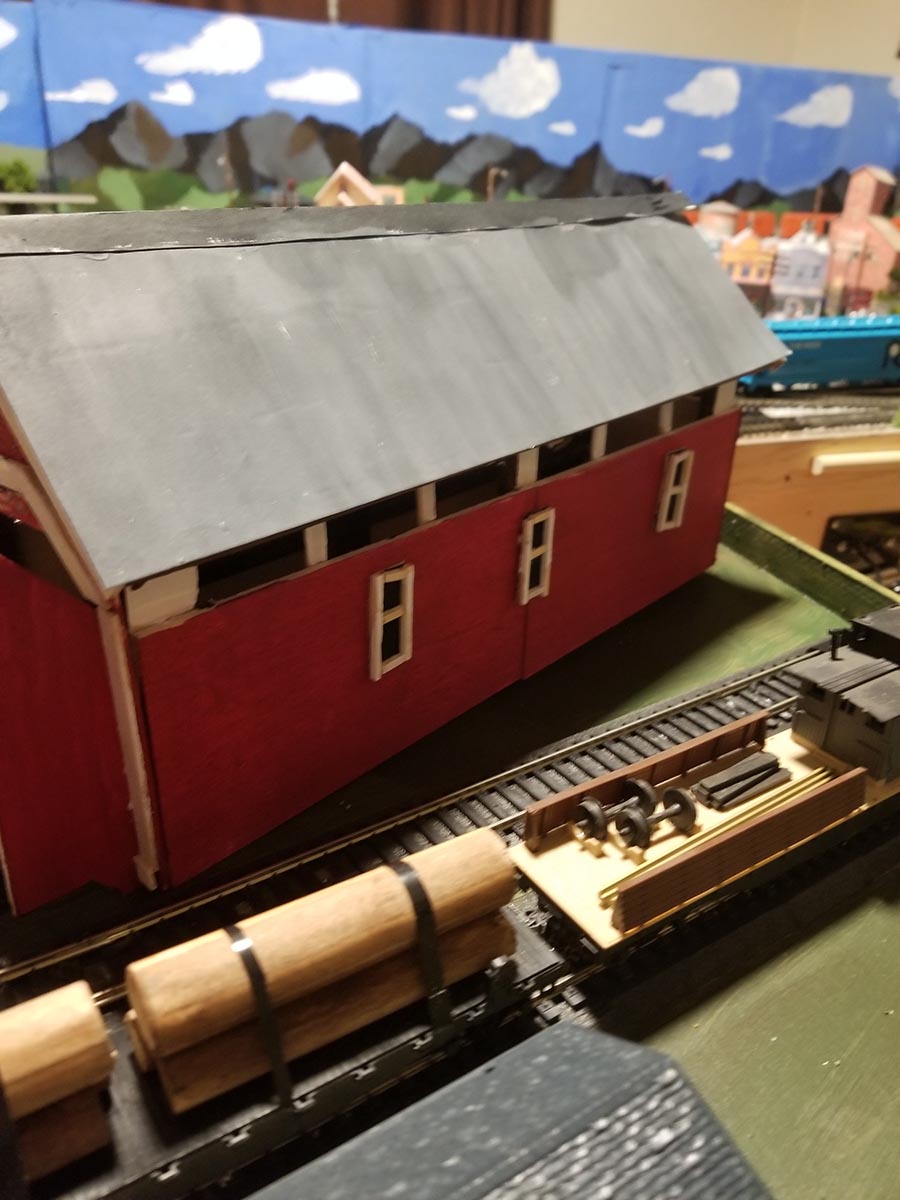 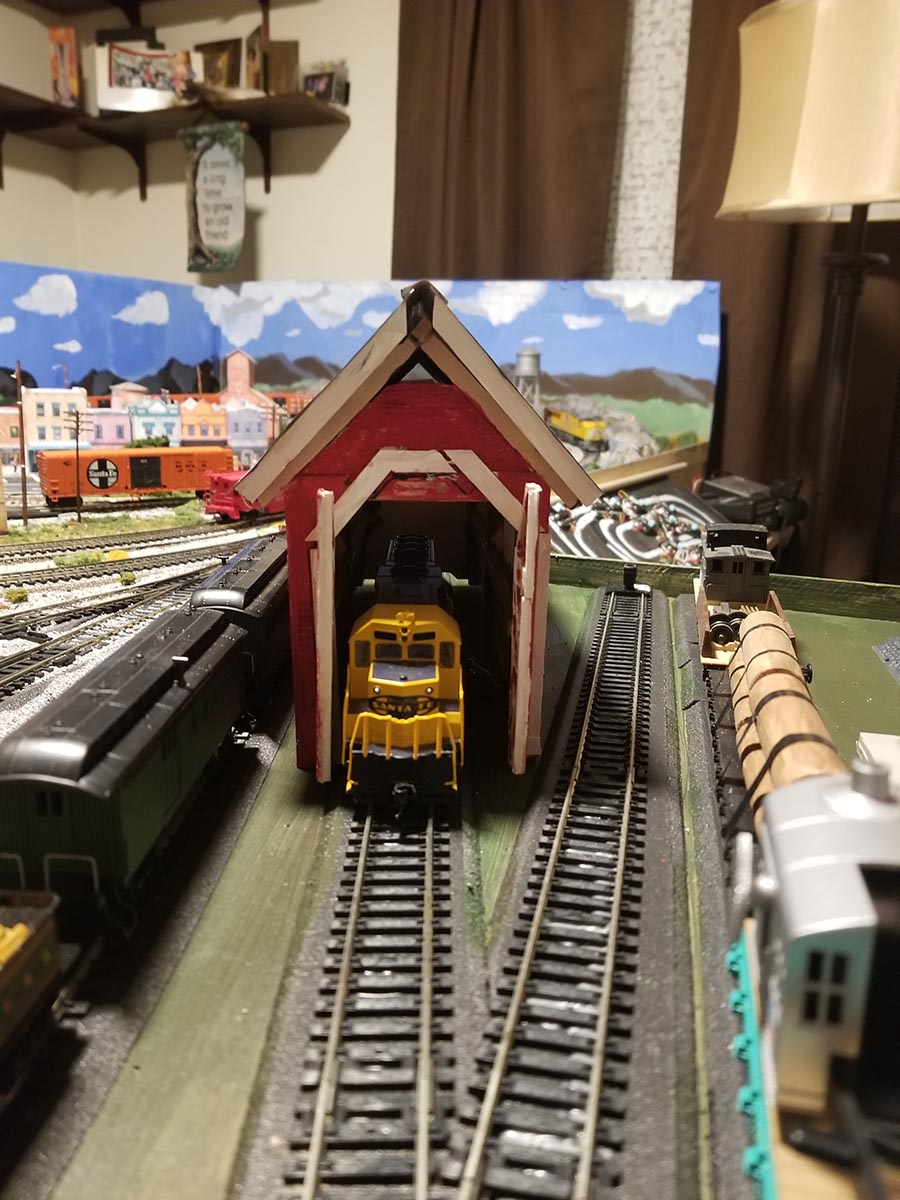 “Hi Al, just uploaded Part 6 of my re build, in this one it shows how I add lights to buildings, a few more trees, and a few tips using old fencing, and card from kits that are left over…

Wow! A huge thanks to Dave and to Bob for taking the time to put his update together.

I do love reading the narratives, you really do get a feel of how much someone is enjoying their layout, just like Bob!

Please do keep ’em coming, just hit reply to any of my mails if you’d like to share something.

Or perhaps you just want to comment on something you’ve seen? Commenting is easy, just scroll down, fill in the box and send.

But please don’t forget the Beginner’s Guide, if you want to start having as much fun as Bob is.