I haven’t written in a while but because I enjoy the posts you put up so much I thought I should contribute something.

I’m 73 and I live in Hamilton, Ontario, Canada.

The corner of this layout is old now and in truth it has become neglected. I tried to put more life in the hobby by deciding to make a LED electrical addition.

The photos are random but you can see that one portion of the layout can be pulled away and is on casters so that I can reach the back corner.

I soldered about ten LED lights with tails about eight inches long and then drilled holes to insert them into a section of ceiling board that had been discarded. The arch just fits inside of the curved track.

In reality this track plan is a figure eight with double tracks and fits in a room about twenty six feet long. The widest part is five feet at each end but is only a foot wide at the middle of the room.

Years ago I had a Pentax camera that was manual and used film. I loved this camera but now I have a modern electronic camera that is impossible to control in low light. Hence the poor quality photos that I do not know how to fix.

The factory had LED lights from an old computer flat screen that was scrapped. The strip could be cut apart and wires soldered on and these were set in artificial floors hoping all the light would not fill the whole building.

One of the photos show how the light illuminates the roof so I used some gold plating cardboard that came from Waterbright candy bars and I found the gold reflection modified the blue hue yo get from the LED lights. I just cut it to size and glued it on the ceiling of the buildings.

The whole project took about two weeks working at the pace I can stand at my age. I hope some of your readers enjoy these photos. 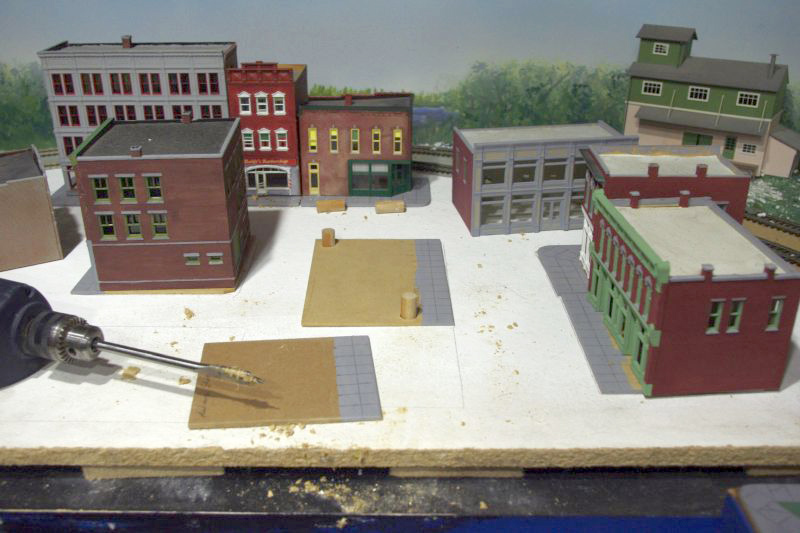 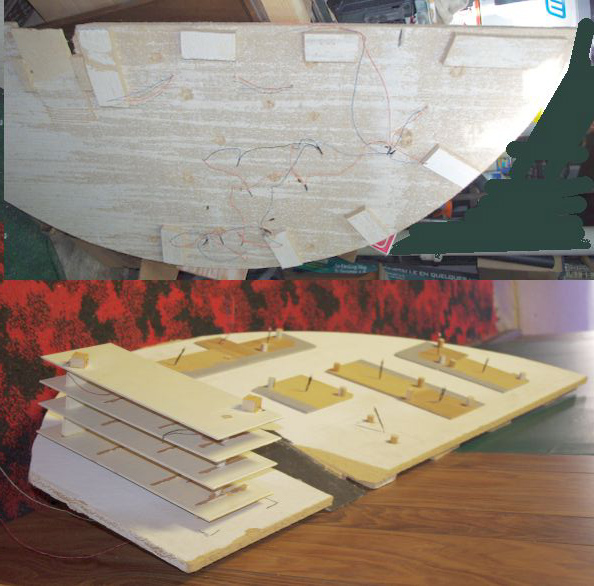 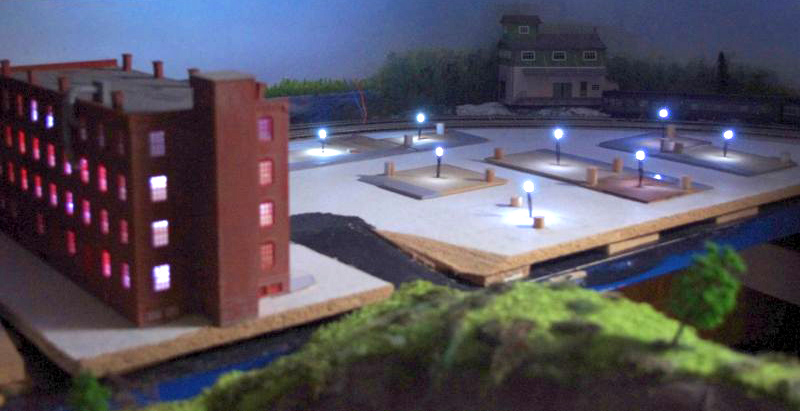 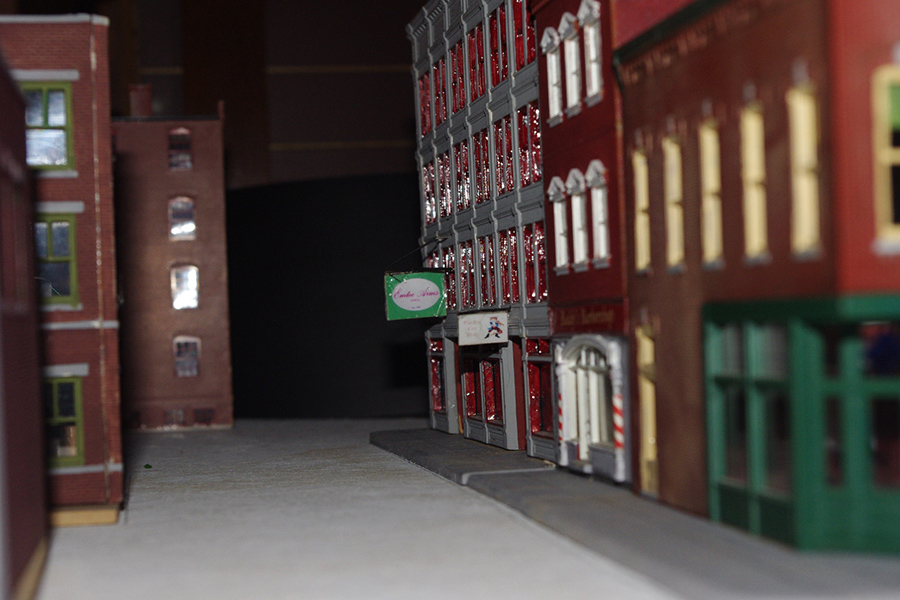 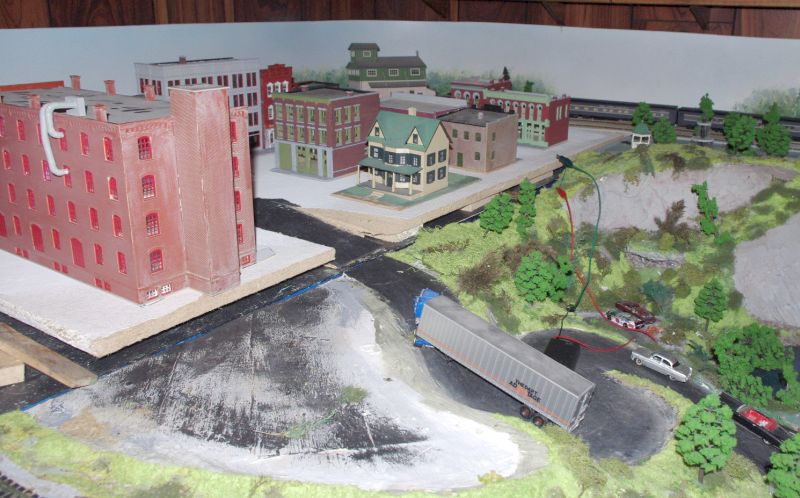 Like me, all railway modellers use miles of wire when building their layouts. Years ago I became friends with a BT telephone engineer who was doing a big rewire in an office block.

All the old wire was going in the skip and at the cost f a cup of tea he let me help myself. I took boxes of it, all for free. Its only problem is that it is single core and not very flexible.

Recently I was in another office building that was being refurbished and I saw this van outside with logos for an alarm company on it. I found and chatted with the fitter and the whole building was being fitted with an upgraded system and re-wired. He stripped out all the old wire and again was throwing it in the skip. It transpired that he was also a railway modeller and he used nothing else.

He told me to help myself to whatever I wanted of the old stuff. There was tons of it. The good thing about alarm wire is that it is thinner than phone wire. It is multi cored and therefore much more flexible. The only time it carries any current is when the alarm is activated which usually is never so the actual wire is ‘as new’. I now use that and it is easier to use and much better. I also use the copper tape method.

I now buy a lot of stuff direct from China, Figures and streetlamps etc – usually sold by the 100, good quality and really cheap. Apart from E-Bay I use 2 other sites – WISH – they always charge shipping, and – ALIBABA, also called ALIEXPRESS in UK. Delivery can take up to a month but in cost saving, it is well worth it.

At the age of 68 I have also just become a volunteer ‘ Fat Controller’ on the Romney, Hythe & Dymchurch miniature Railway. (They have a website) I live on Romney Marsh in Kent and it runs past the bottom of my rear garden. I love trains.

Keep up the good work Alastair.

Should I add wiring to the ebay cheat sheet?

Now on to something completely different – another backdrop. Really pleased with this one, hope you like it:

Just like the other backdrops, it’s 18″ x 144″. To print it, just download on to a CD or memory stick, take it to any office stationers (Kinko / Office Max) and print it out on a smooth, self adhesive, vinyl with UV inks and a matte finish.

If you’d like to grab this back drop before it goes in the store at full price (I’ve got quite a few to put on now), you can grab it here for just $7.

That’s all for today folks. A big thnanks to Doug and Bill.

And if today is the day you take your first step with your model railroad, the Beginner’s Guide is here.