Brian makes a barge for his waterfront harbour

Brian’s been back in touch.

You may remember him from his stunning waterfront scene, his last post is here.

“Hi Al, I have just completed a utility barge for my waterfront harbour.

I saw this photo on a website of a kit that is available and decided that I need one and should scratch build it for my HO scale layout.

Below is a photo from the website (Fos Scale Models) which I used for for inspiration. 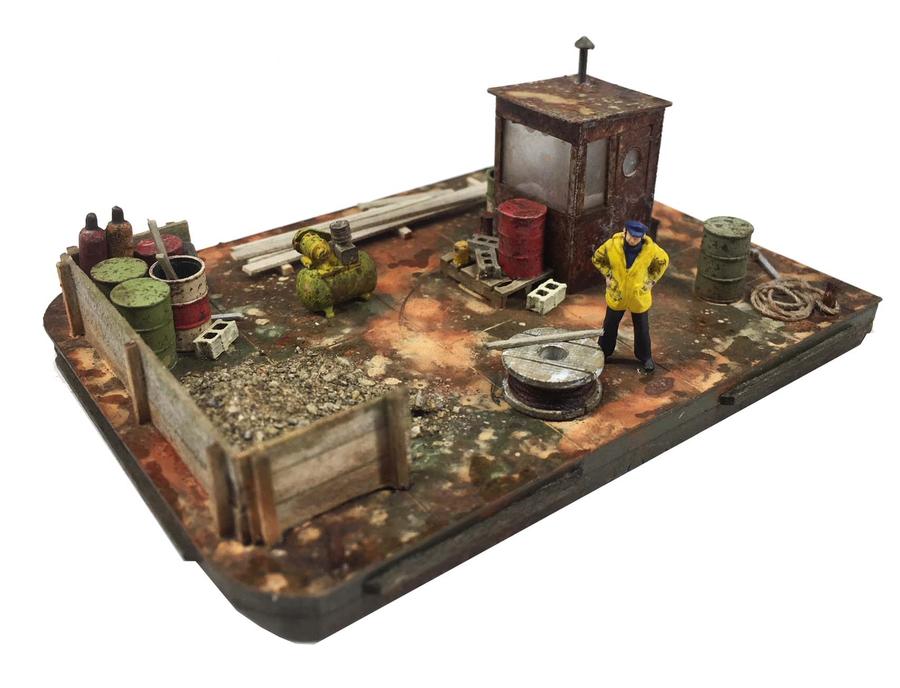 I cut the top layer (card stock to represent a metal top) to size and scored the metal plates. I sprayed it with grey primer. I had the wheelhouse in one of my many bits boxes that I could use. 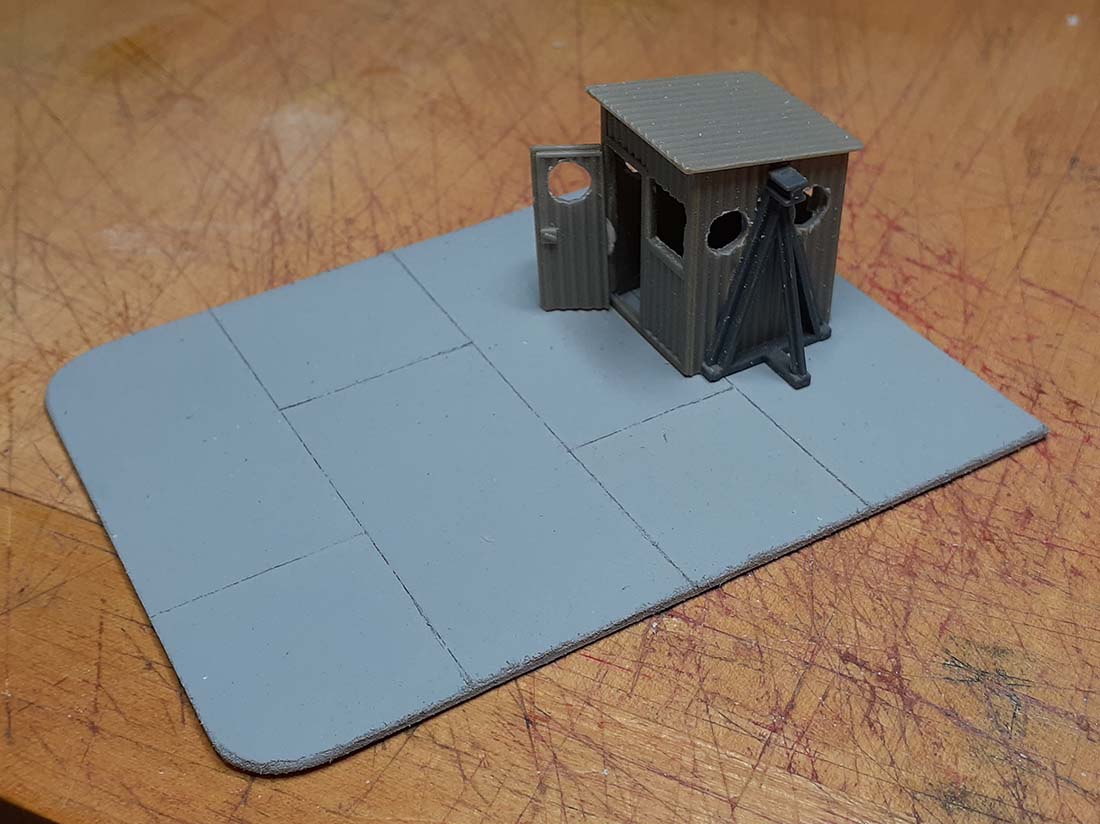 Added some detail to it and placed it in position to see if it would look okay. I was not quite happy with the look and decided to remove the metal supports on both sides of the wheelhouse. 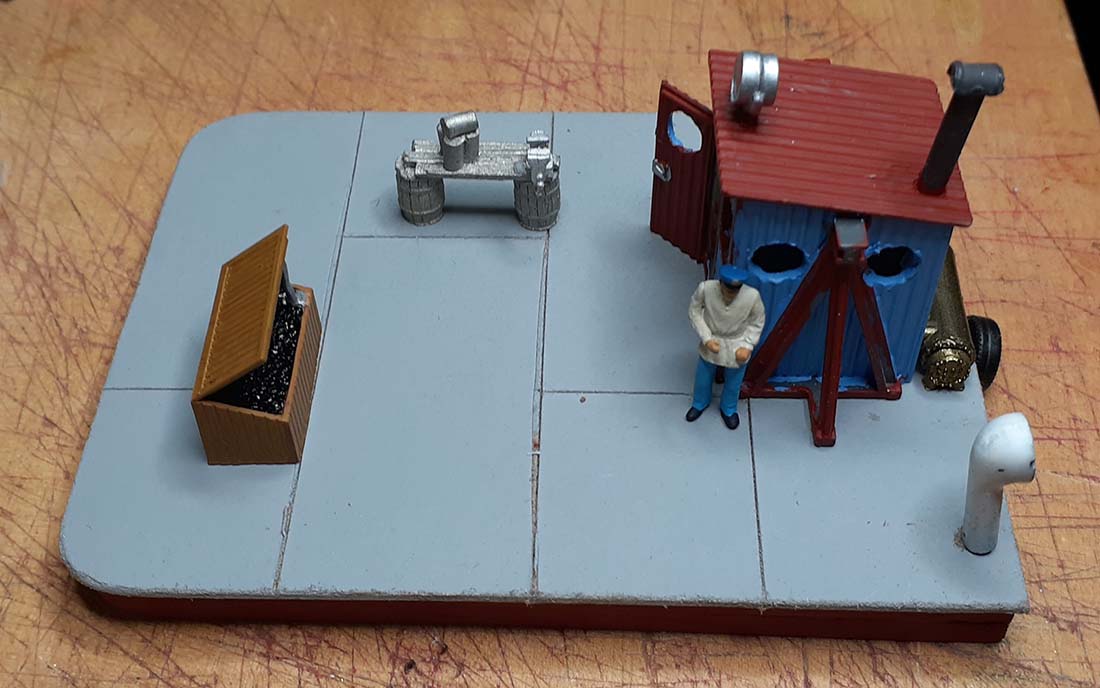 The “hull” was cut a fraction smaller than the top deck. I laminated two pieces of 0.125 inch Masonite (hardboard) to make the hull and then tapered the front of it down to the waterline. Here it is on my worktop figuring out where to place all the details – also from my many bits boxes. 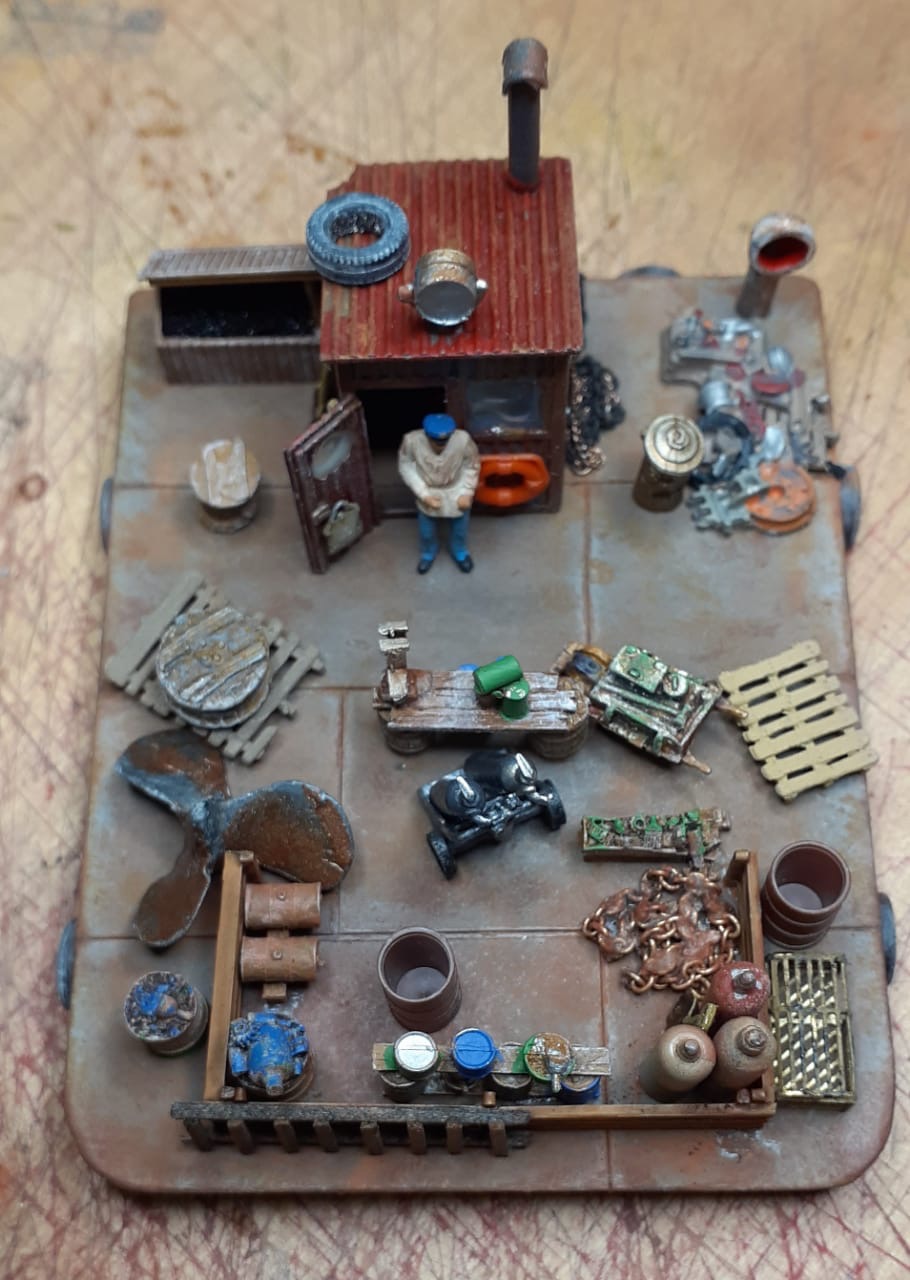 I am always on the lookout for scale vehicle tires to use especially in my harbours. When glued onto the sides as buffers, i slice them level with the hull in order for it to sit flat on the water.

After temporary placement of the details, I gave it the once (many times) over to make sure that it looked workable before gluing it all in place. Here it is on my hand to show the small size – 3.75 X 2.75 X 0.375 inches. 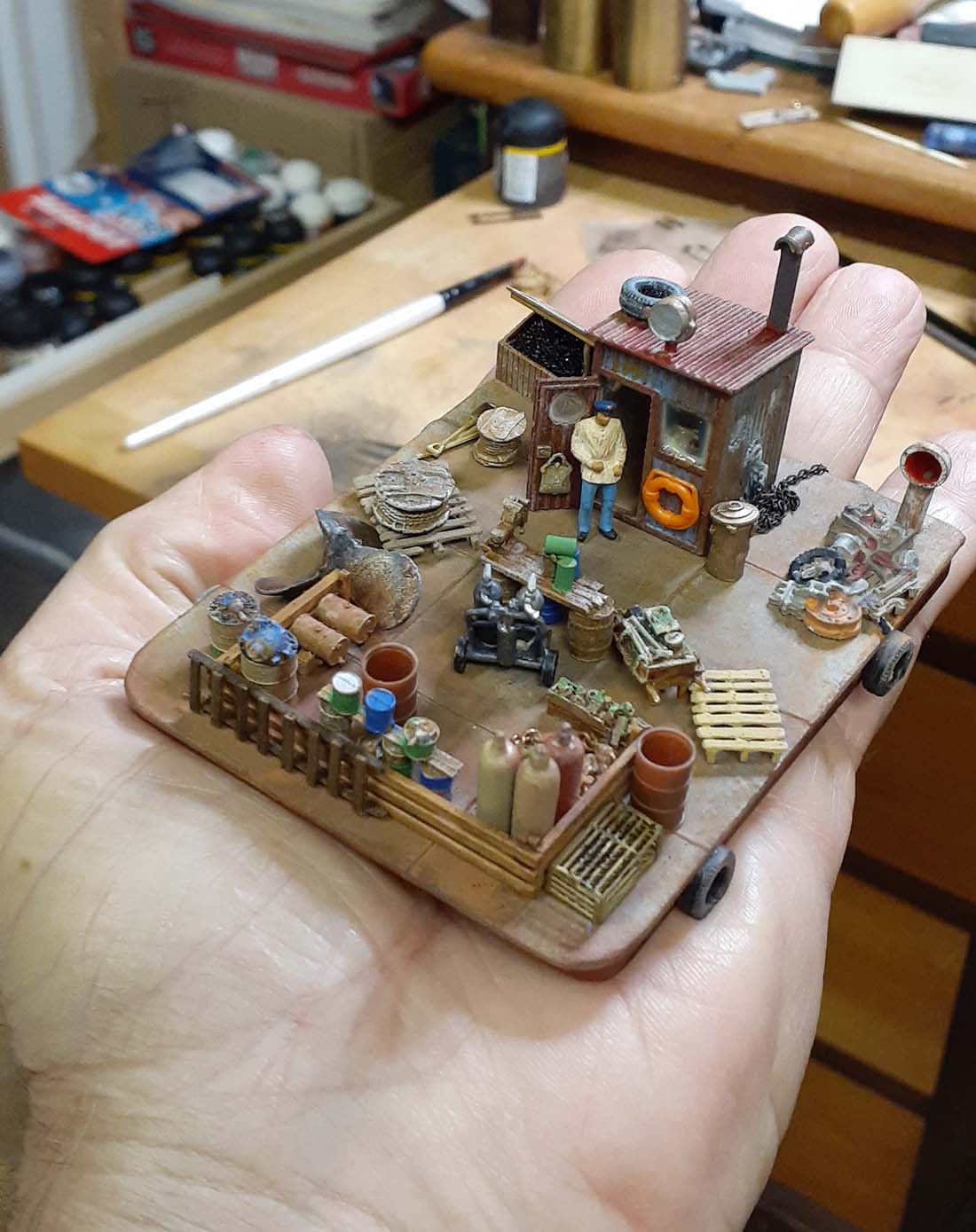 Again, a different view to check placement of the details. 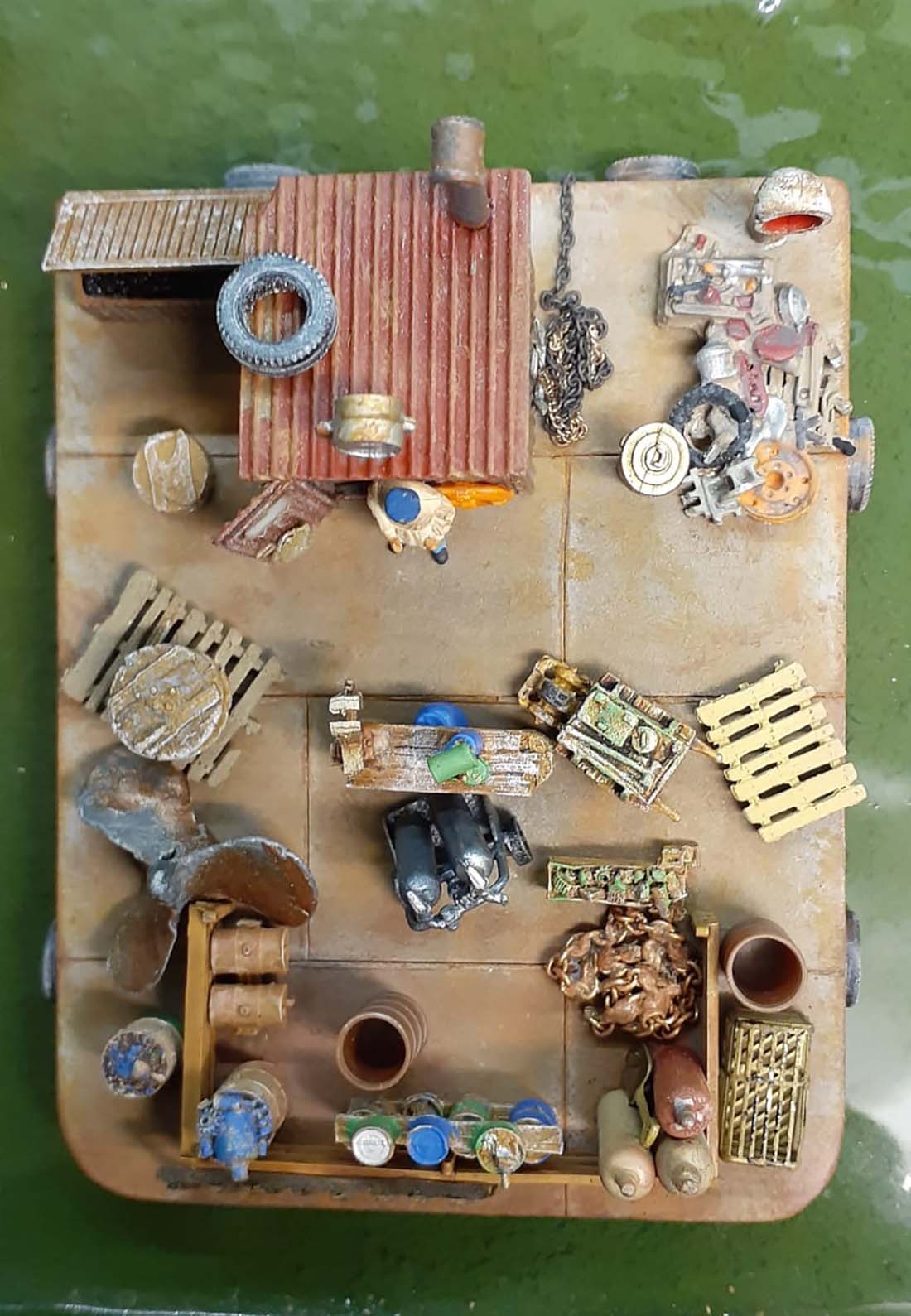 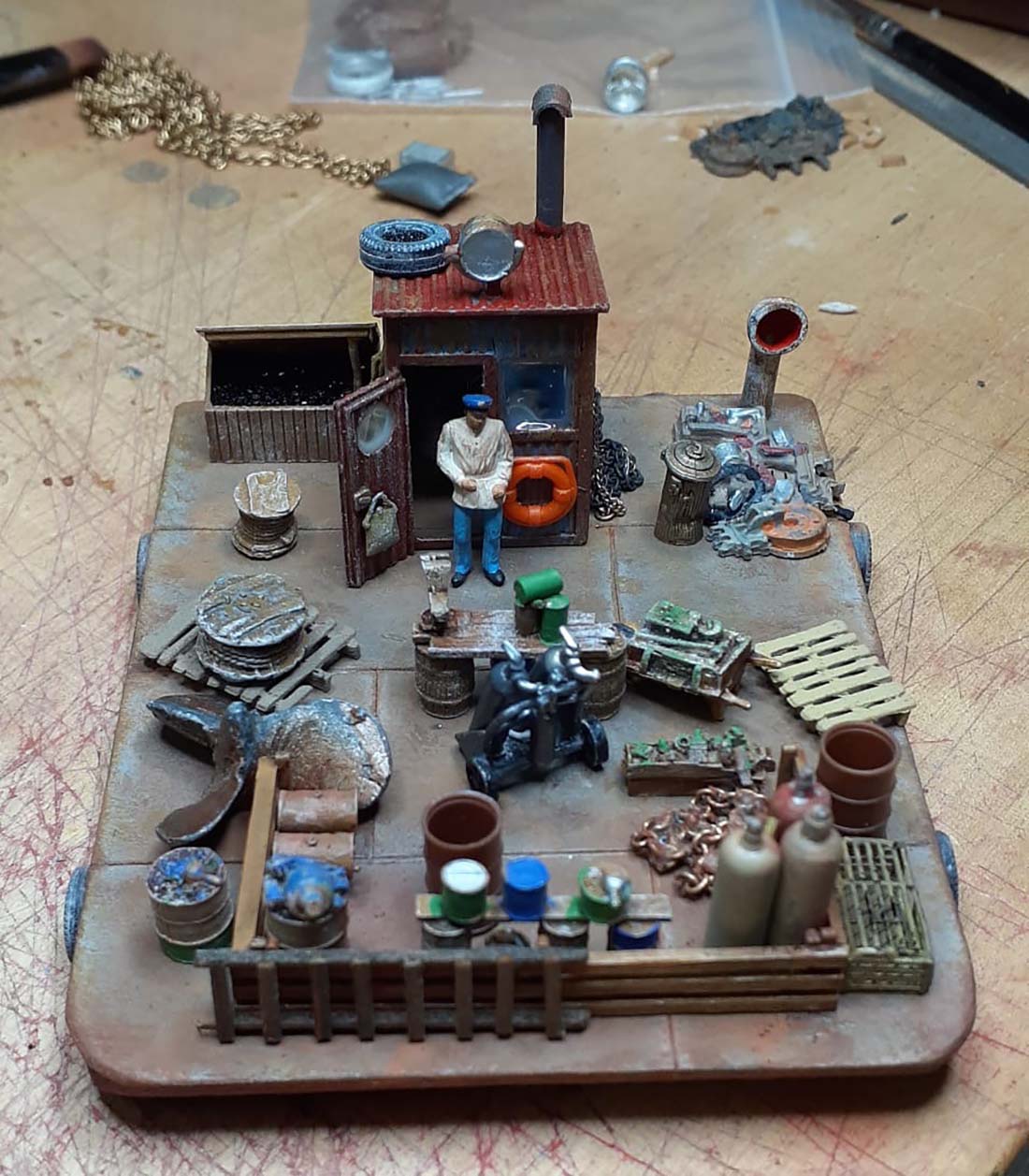 While waiting for the window glue to dry I placed it in the harbour as a test. After looking closely at it in place I realized that it needed more weathering. It was not dirty enough to be a working barge in the harbour.

It pays to take a break, sit back and view your model. I did this and realized that I left off the kleets which are used to tie it up to the keyside or other boats. 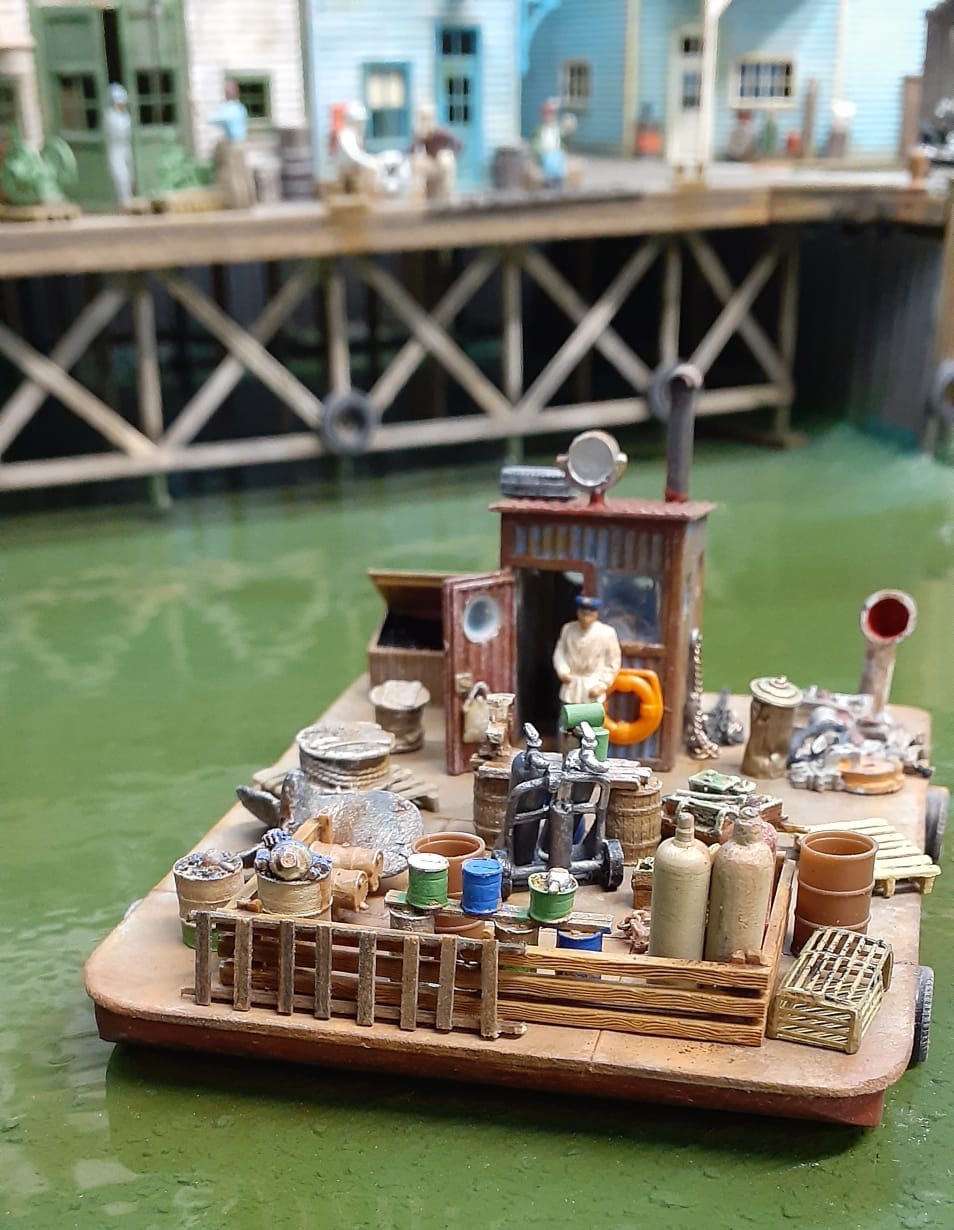 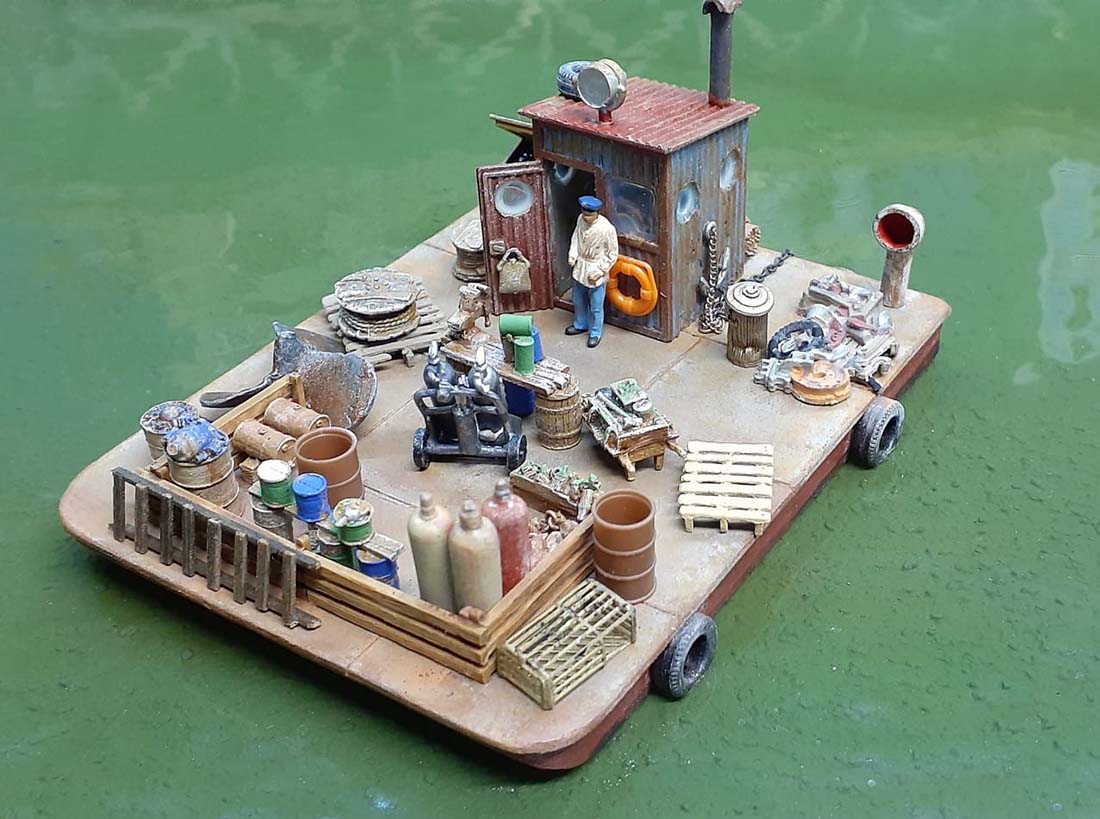 Did not take long for the seagull to find somewhere to perch in the hope of finding a tiny morsel. 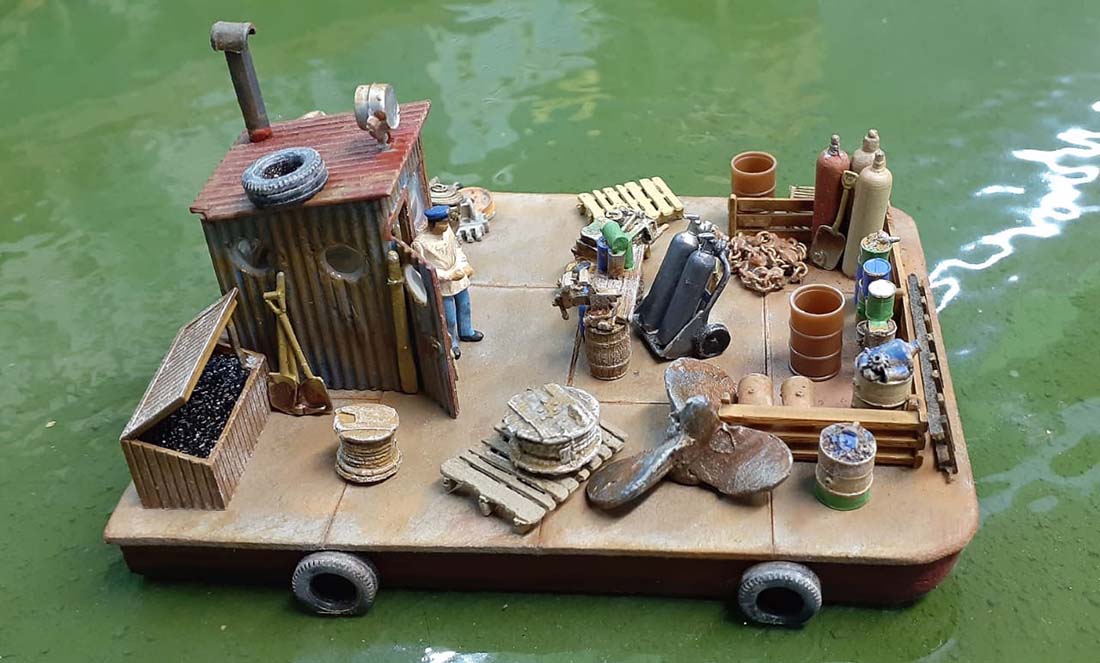 Final weathering and all details glued in place and in the harbour to begin working.

Thanks for all that you do for this hobby and keep up the good work.

All the best Al, and thanks as always for your blog.

Now on to another Brian, who has also featured on the site before:

Further to my previous Poirot video I thought I would make a fun video featuring my Changing of the Guard scene on the OO loft layout with Airfix Guards and Band.

It includes footage from the actual Changing of the Guard at Windsor Castle, my son is the Bandmaster of the Irish Guards. Here’s the story to back up the video:

“I have several ‘hobbies’ that keep me busy in retirement – railway and military modelling, walking football (to keep fit), and playing trumpet in a concert band. My enjoyment of playing music has ‘rubbed off’ on my elder son who took up a career as a musician in the British Army and is now the Bandmaster of the Band of the Irish Guards of the Queen’s Household Division.

On both my N and OO gauge layouts I have tried to include scenes where various members of the family are involved, so modelling the Changing of the Guard at Windsor Castle, a regular activity for the Queen’s Guards and Bands was a challenge that had to be undertaken.

The Airfix 1:76 Guards Band and Colour Party were the only models in OO gauge that I was aware of, but being produced way back in the 60’s meant that I would have to find them on a popular auction website.

Fortunately, I did, but at a considerably higher price that the two shillings I would have paid for them when I was buying them as a boy all those years ago!!

With all the research needed to paint them from my son, I commenced the painstaking task of painting both the band and the colour party. There was one very important piece of surgery that had to be carried out – converting a side drummer to my son, the Bandmaster who marches in the band towards the back (you’ll see him in the video) with his conducting baton tucked up his sleeve. Many hours later, about 40, both Guards and Band were fully painted, and were passed inspection by the Bandmaster!

The Windsor Castle, named Wenham Castle (my Grandmother’s maiden name) on my layout is a 1:72 kit from Miniart which after a lot of filling and painting came out reasonably well.

The march into Wenham Castle is via Station Approach passing the public entrance to West Hoe railway station and the police have the ‘crowd’ and ‘traffic’ fully under control, except of course for the passing goods trains that like to make their presence heard!!!

I hope you enjoy the video. My apologies to those who were hoping to see more train action, but I think many will agree that without scenery and interesting things going on in any layout, just trains, I hesitate to say, could get a bit boring? Each to his own though eh?

All the best to railway modellers everywhere.

I am getting more and more submissions from folk who are combining their hobbies – and why not? A good back story always makes a layout.

What’s more, I’m getting more and more folk sending me stuff of their other hobbies, which I do really enjoy seeing too. I haven’t ever posted any, but I think I will soon. I do enjoy seeing what everyone gets up to in their spare time.

A big thanks to UK Brian, and an even bigger thanks to Hall of Fame member, South African Brian.

Really enjoyed today’s posts, hope you did too.

And don’t forget, the Beginner’s Guide is here if you want to get going on your own layout.

20 Responses to Brian makes a barge for his waterfront harbour