This letter to you has been a long time coming! I have been an avid reader of your site for the last 6 years or so and look forward to opening you email every day.

I retired some 5 years ago and in the runup to retirement, I decided that, post retirement, I would build a model railway – maybe prompted by my wife’s adage “we married for better or for worse, but not for lunch” and she definitely did not want me messing her social calendar.

However, I got a slow start. We decided to downsize shortly after retirement and we moved into a 5th floor apartment.

I had spent much time reviewing and researching what type of model I wished to build – I am a British expat living about 40 miles up the Long Island coast from New York City (moved 30 years ago expecting to stay 3 years) and wanted to model the British theme of the 1950s and “60s, ie at the end of the steam era.

The first complication was the minor difference of the US’s HO and the UK’s OO but more of that later.

I have never lived in an apartment before, and I did not consider the challenges of woodworking 5 floors up, so the first challenge was the table.

I decided to start with an 8ft by 4ft layout as this seemed to be a standard size and it fitted our 3rd bedroom but cutting timber at ground level and carrying it up 5 floors didn’t seemed attractive – never mind the mess that would be unacceptable to the HOA – so I was delayed until I found the Mainne Benchwork website which sent one through the mail.

The mode of construction is not dissimilar to a piece of Ikea furniture! So, at last I could start. 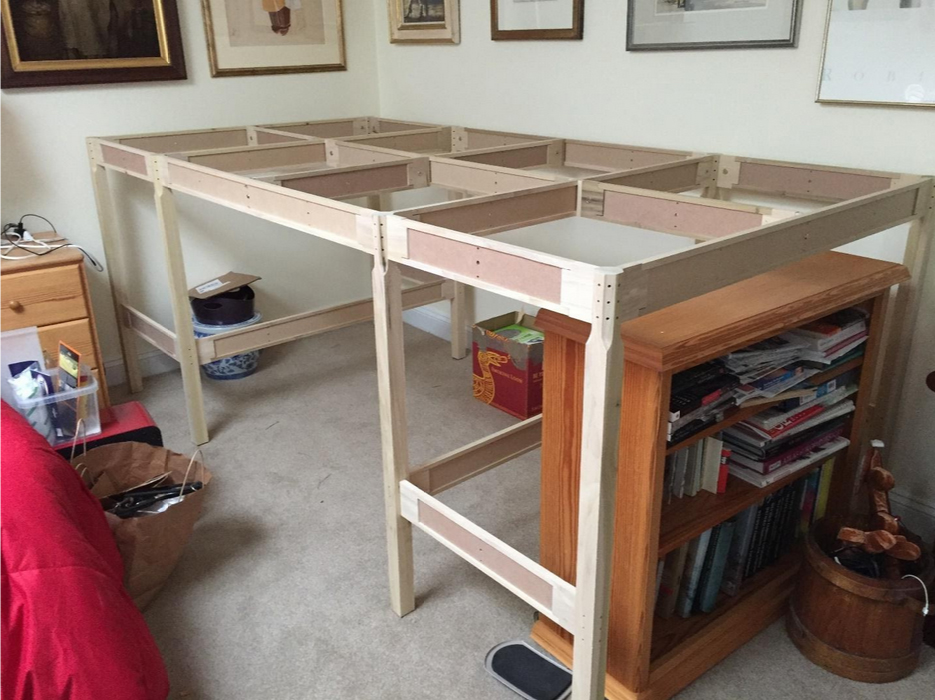 I then laid 2 4×4 sheets of fiber board on top. I had read from many of your contributors that I need a polystyrene base on which I could model.

My local Home Depot only had the white expanded polystyrene insulation which I bought – so I have been working with this ever since. Its not ideal but is easy to cut and I have loads of it to use up. 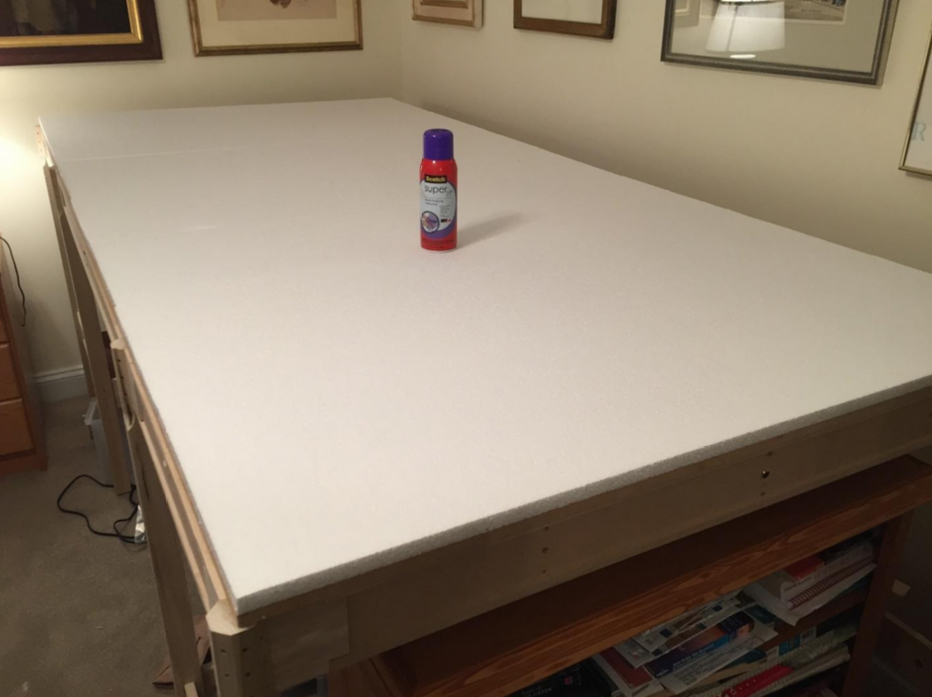 I used Any Rail software to design my layout and came up with this- and this is basically what I have today, although the bottom side of the inner track is raised. There is a station both at the bottom side and at the top side. 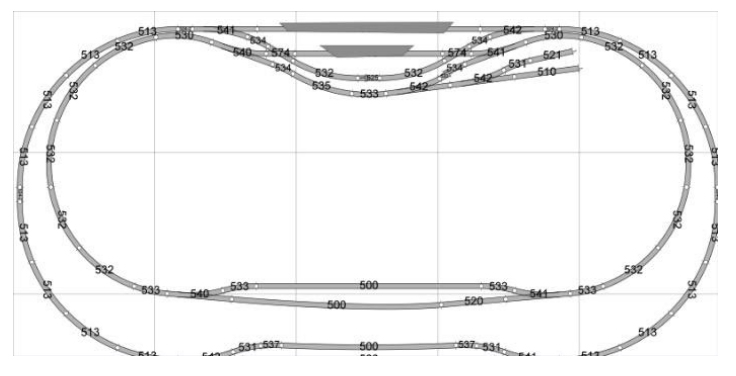 In early 2019, events took a major turn – my wife and I decided, after 4 years of apartment living, that we would prefer to live in our own house rather than in an association, and so the railway was put on hold again until we moved, which caused another delay of 6 months plus the time it takes to settle in and all the other stuff which goes with it.

So it was not till November last year when I started to put it all together again.

In my days of commuting into London from Sussex, I had always been very aware that the railway line is never at ground level, it is either well above suburban gardens or going through a cutting or tunnel and so I wanted mine to have cuttings and tunnels and gradients. Here is the overall view followed by specific areas. 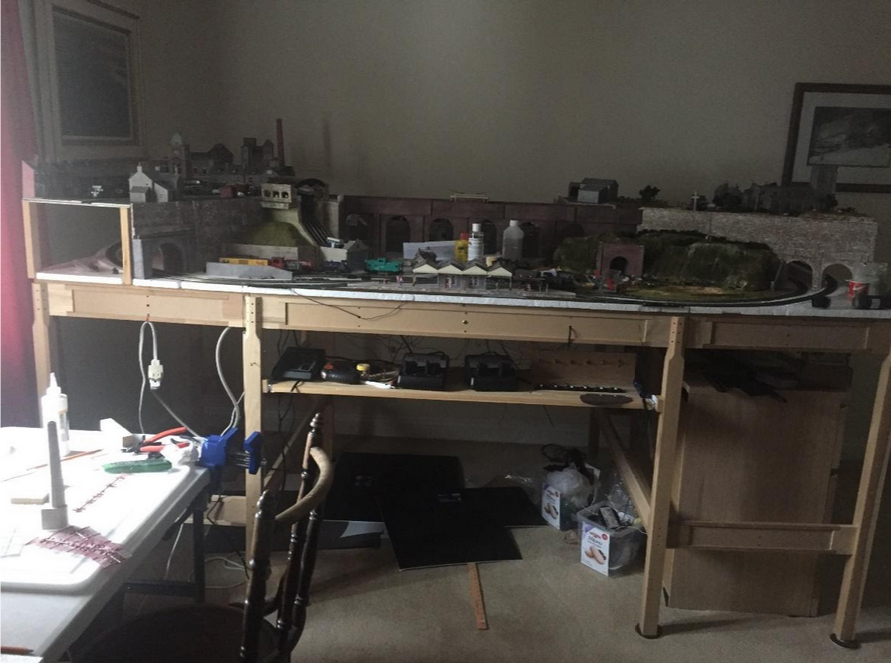 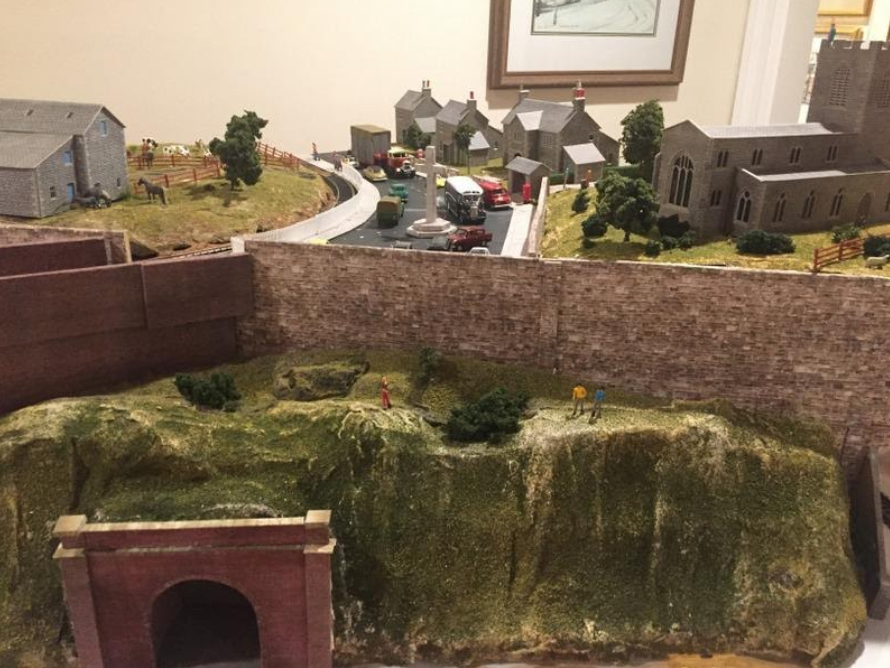 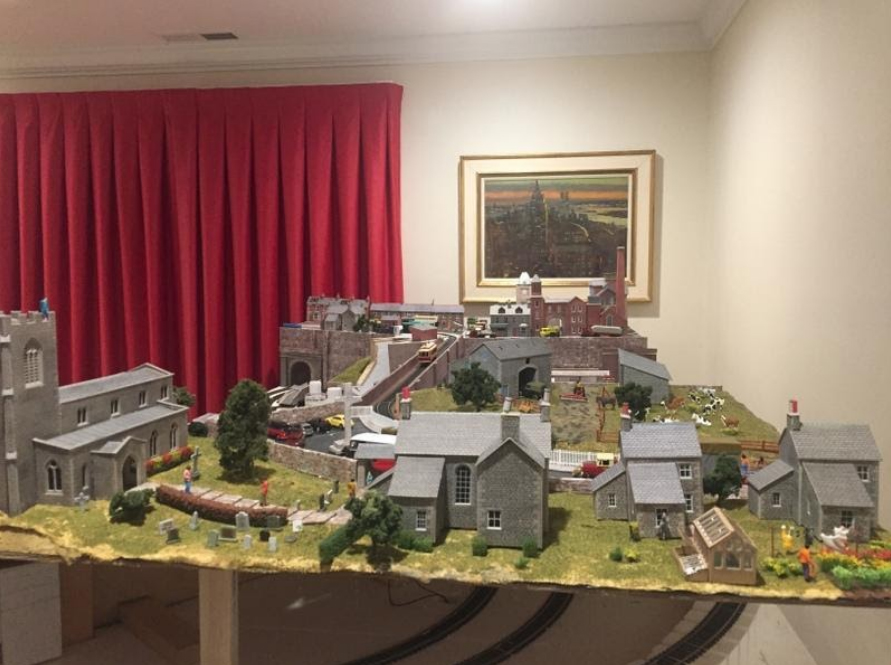 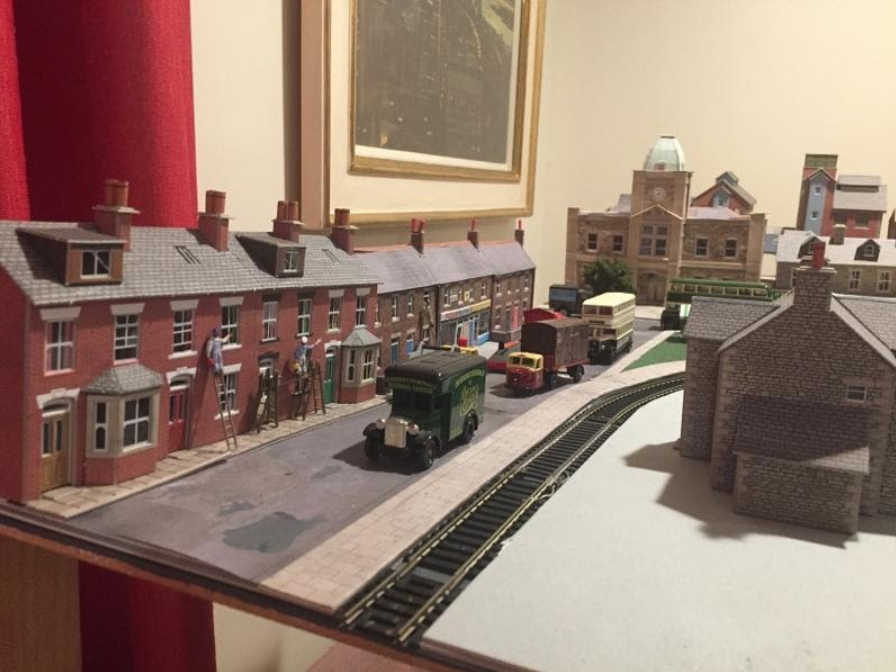 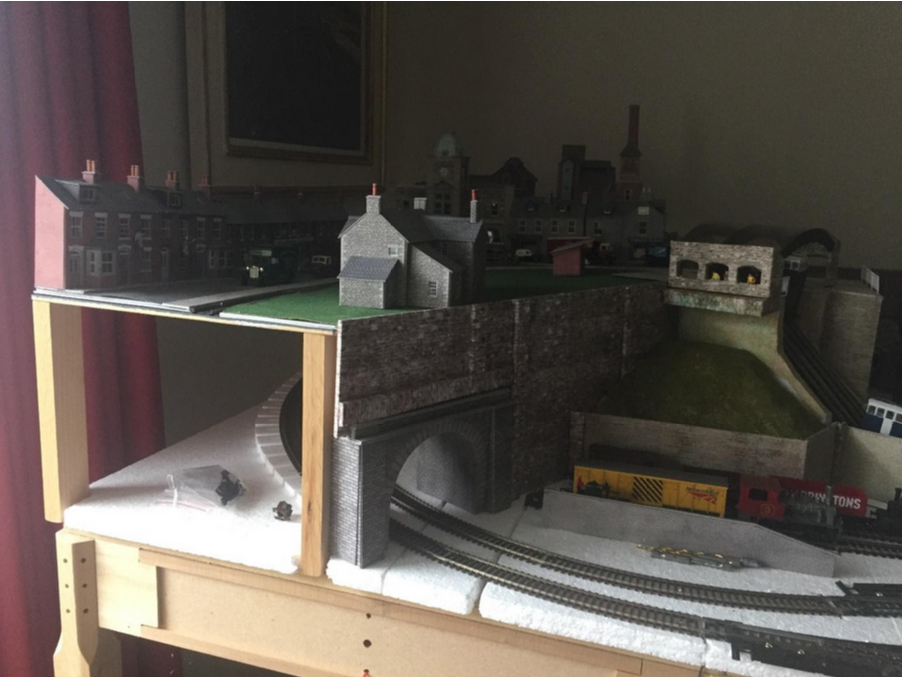 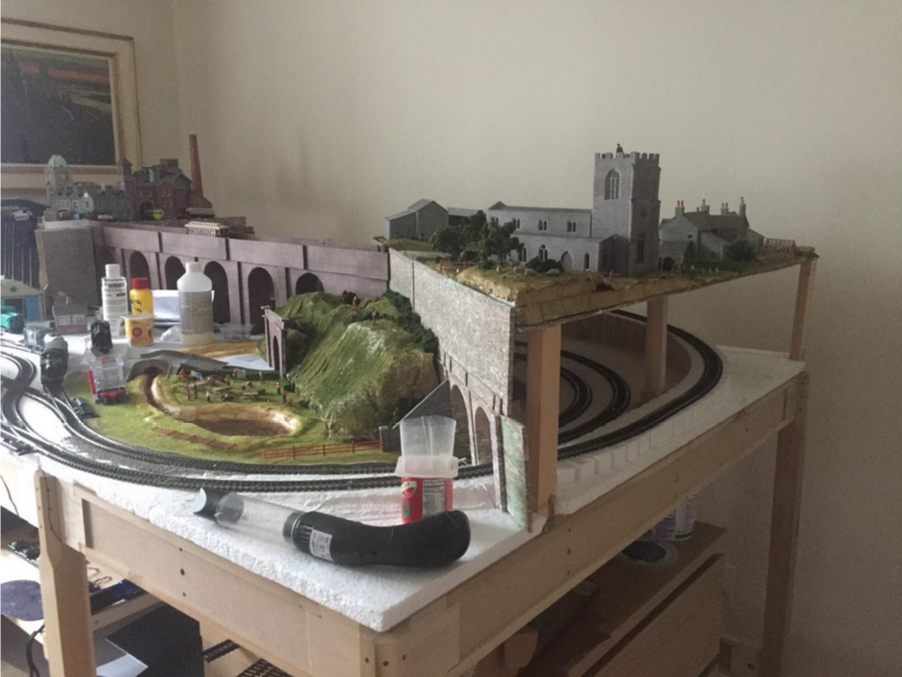 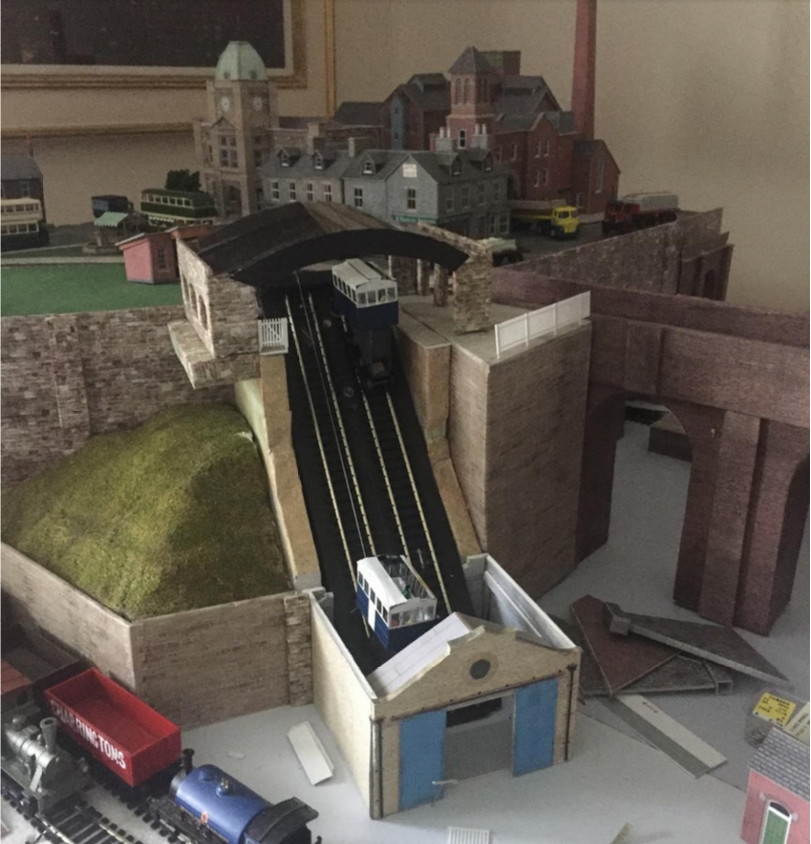 There is one major addition to the plan shown above. Many years ago, I bought a streetcar (or tram) and decided that it would be fun to add it to the plan.

In the photos, you will see the viaduct which joins to 2 higher scenes together and it is this tram which runs on this track, with an automatic stop and reverse so I can just have it running and leave it alone. Most of the buildings are either Metcalfe.

I am sure I am not the only one to have made many mistakes, some of which have been interesting to solve, and some just frustrating.

I never thought that 8×4 feet would not be big enough, for instance I can only run trains with 2 carriages.

I also built the tunnels too high, and the viaduct which connects the 2 higher levels obstructs the station which is behind it. I will have to change this at some stage.

I also wanted a way to link the lower level with the upper level, it is too high to build a road connecting them so I looked on the internet and found a funicular (cliff railway) from Langley Models in Crawley Sussex.

This has proved a bigger challenge than expected so would be interested to hear from anyone who has one on their railway and got it working properly.

Finally, on the question of HO vs OO scale, which is 1/87th vs 1/76th. I have bought HO track in the US (Atlas) but bought engines and rolling stock from the UK, mainly Hornby. I find that the front bogies of an engine come off the rails regularly and wonder if it is a function of the different scales – anyone else had the same problem? I may have to buy new track next time I am in Blighty!

As you can see, there is still much to do, especially at the lower level – ballasting and trees and…

The current pandemic has enabled me to progress much faster than I would have expected, but I have learned from reading other modelers comments that a layout is never finished.

I hope you have enjoyed my script and photos and look forward to your comments.

A huge thanks to Briand for his wonderful pics and a superb narrative.

I do love it when a layout has a theme, especially when it’s from someone’s past too.

And don’t forget the Beginner’s Guide is here, if you want to take those first steps, just like Brian did.