Just wanted to drop a line to say that I finally made a start! It has been a little over two years since I bought the Beginner’s Guide.

My wife says that I pored over it like it was the Dead Sea Scrolls!

I also read the daily posts voraciously and viewed all the videos and photo submissions with great interest.

I purchased your print-out structures (and have already built several of them for my grandsons to use with their wooden train sets and all those “really useful” engines).

I built a 10’ X 16’ shed, initially for my grandsons to leave their train layouts set up in, but with plans to eventually “appropriate” some of the floor space for the 4’ X 8’ benchwork of an HO scale layout.

I scoured ebay and local sources for bargains in rolling stock and locomotives.

I decided to start with Bachmann EZ-track because I got a steal on a big lot of new and barely used track at an estate sale.

Last week I finally cleared the decks of other projects and got cracking on the benchwork and layout.

The track that is shown was just put down today.

I will be modeling the late transition era of my childhood in the 1950s and 1960s, for the Southern Railway in the southeast corner of my state, and a non-prototypical branch line called the Runharde and Tyre Short Line.

I am looking forward to getting my track wired in the next week or so and running some locomotives.

My plans include a farming community in the foreground of the first couple of pics, an industrial area in the left midground, and a ridge with train tunnels in the background.

There will be passenger and freight depots and some freight sidings. I will be modeling some actual historic railroad structures from the area. I will take some better pics when there is more detail to show.

Thanks for all you do for our hobby. Thanks as well to all the participants who share freely from their knowledge and experience. 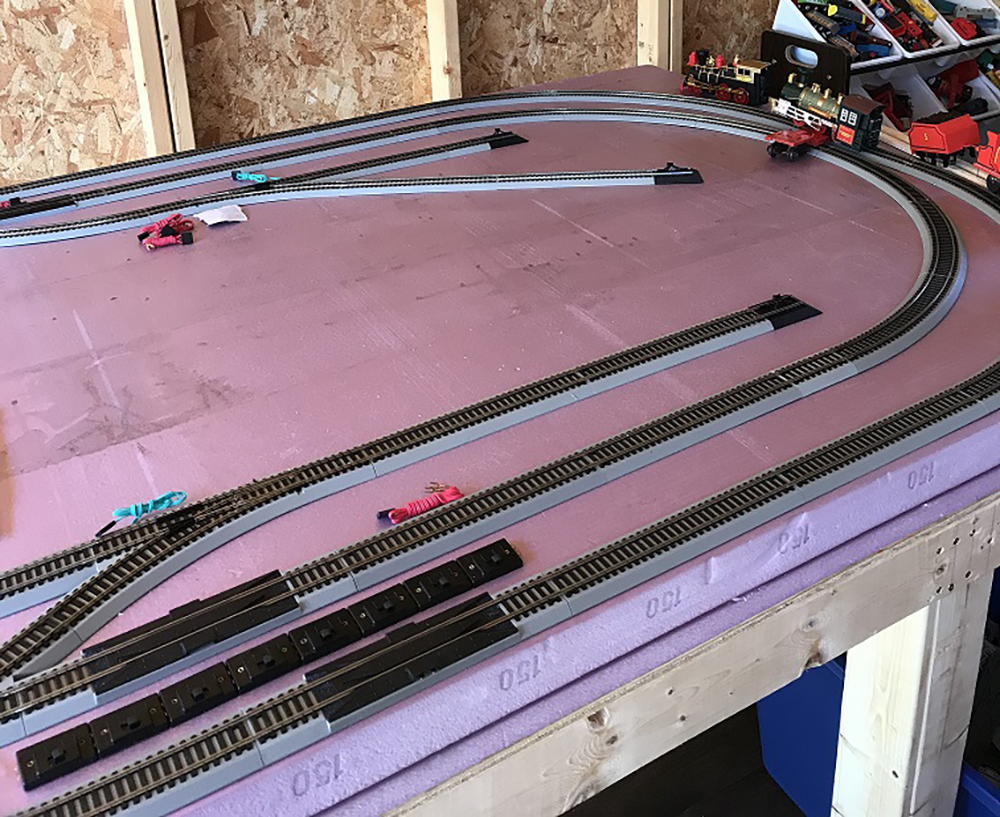 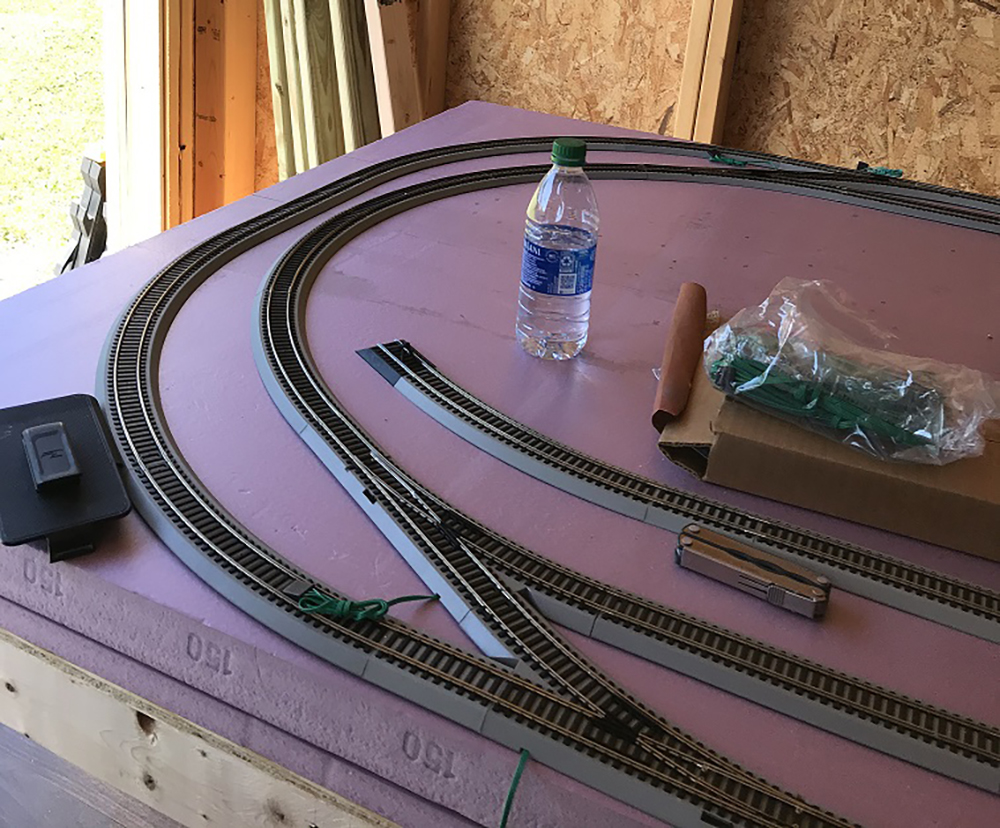 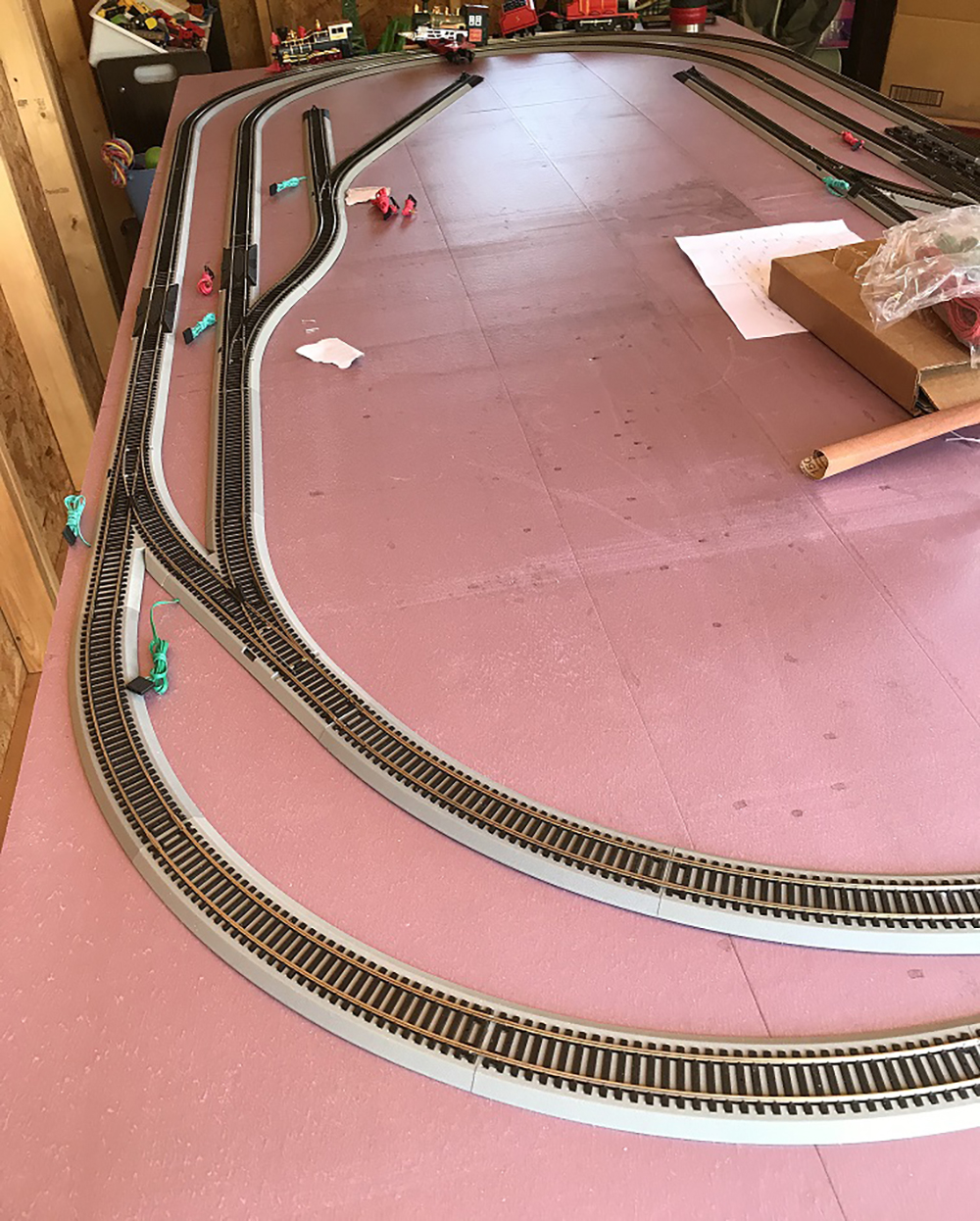 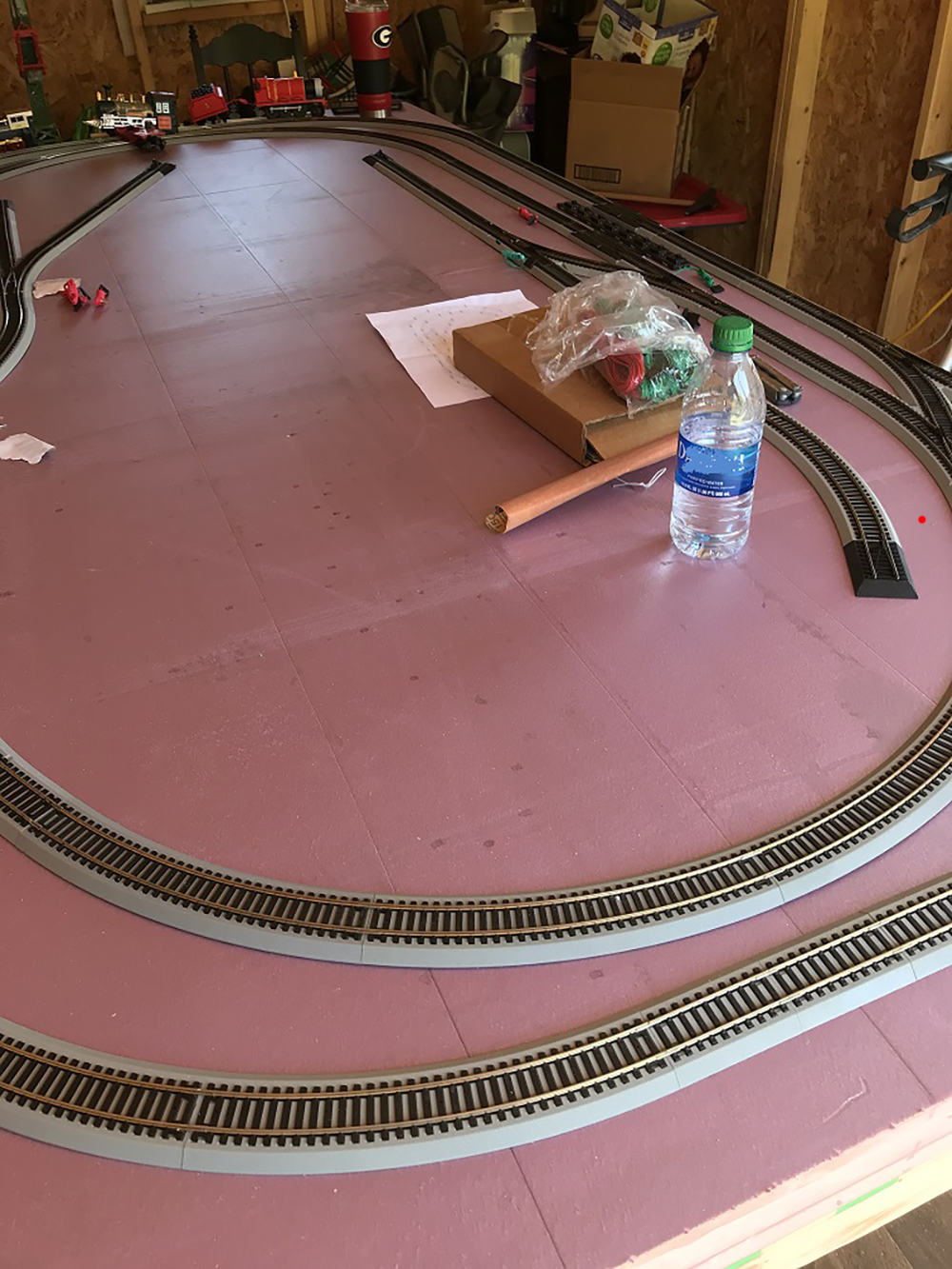 “Here is my first venture in model railroading.

N-scale needs a lot of patience and steady hands working on such small details. But well worth the effort. 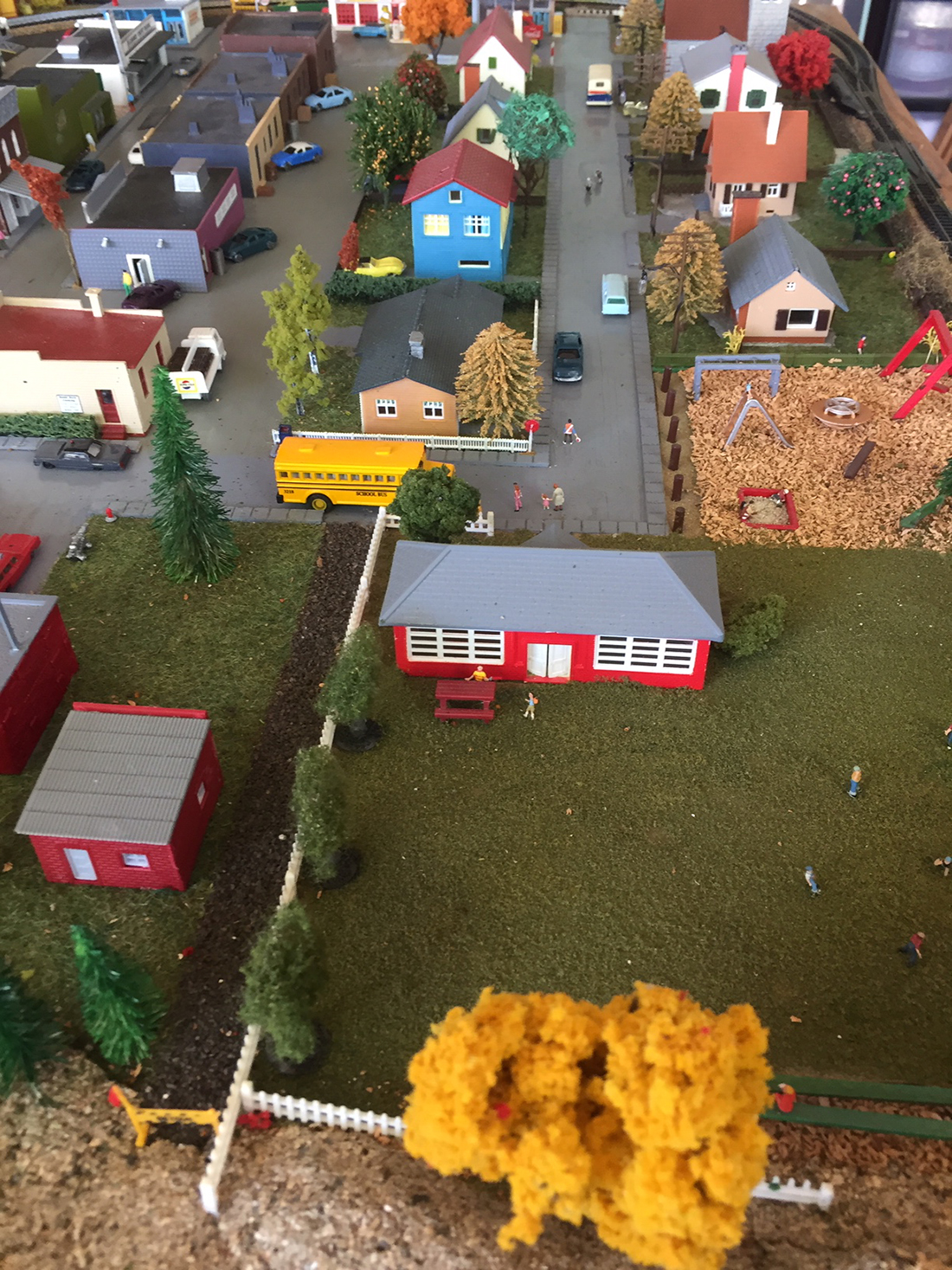 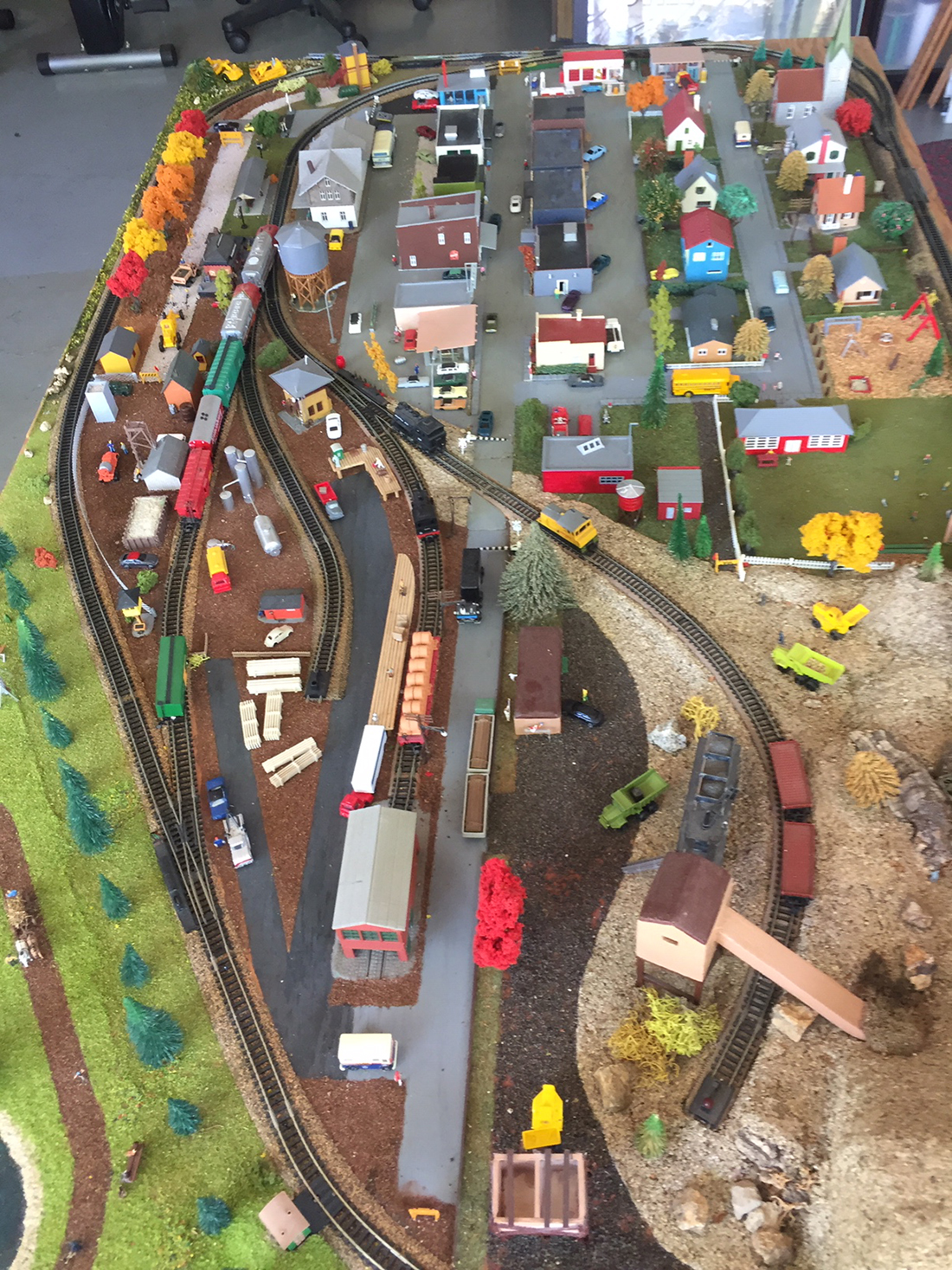 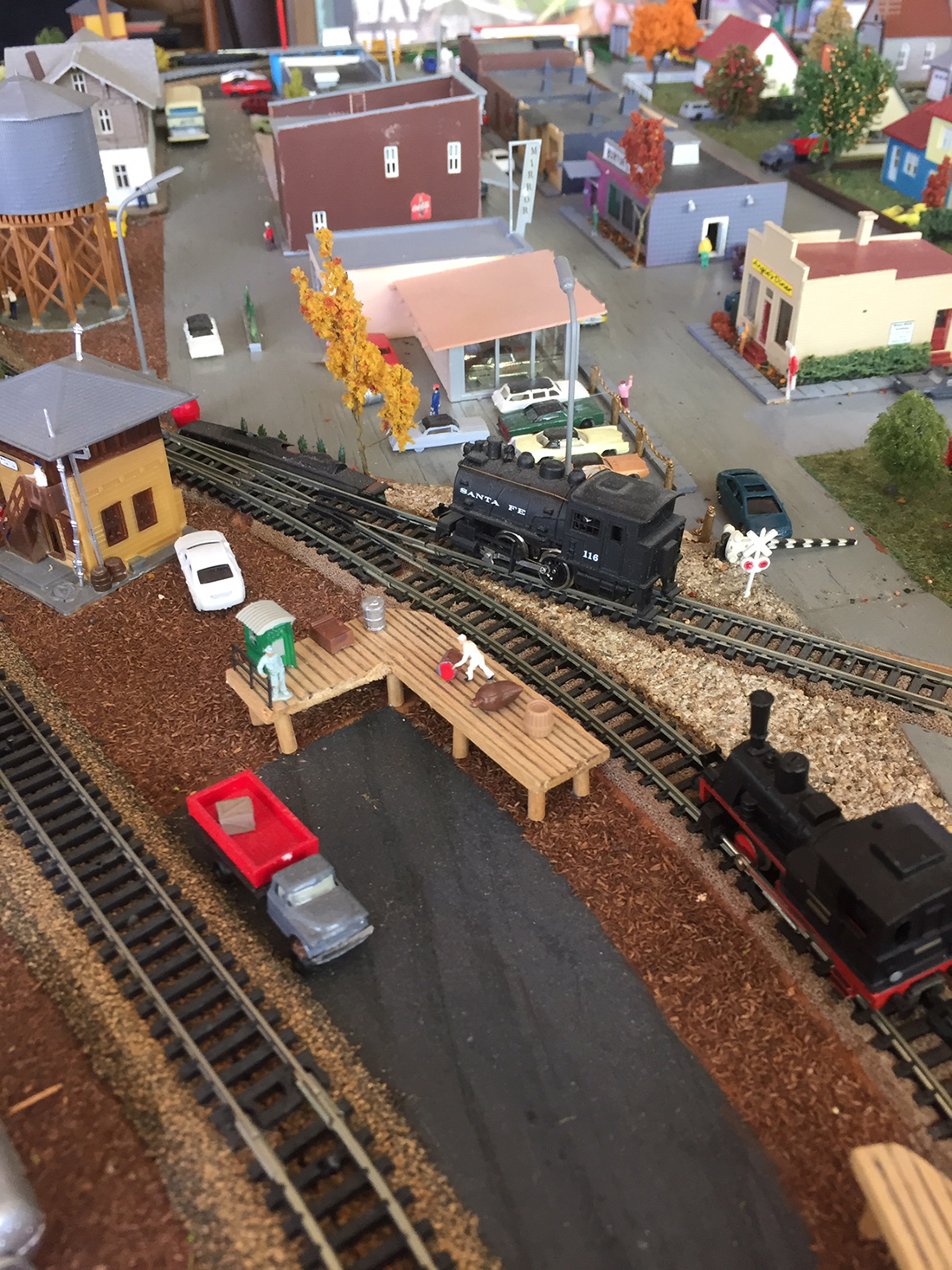 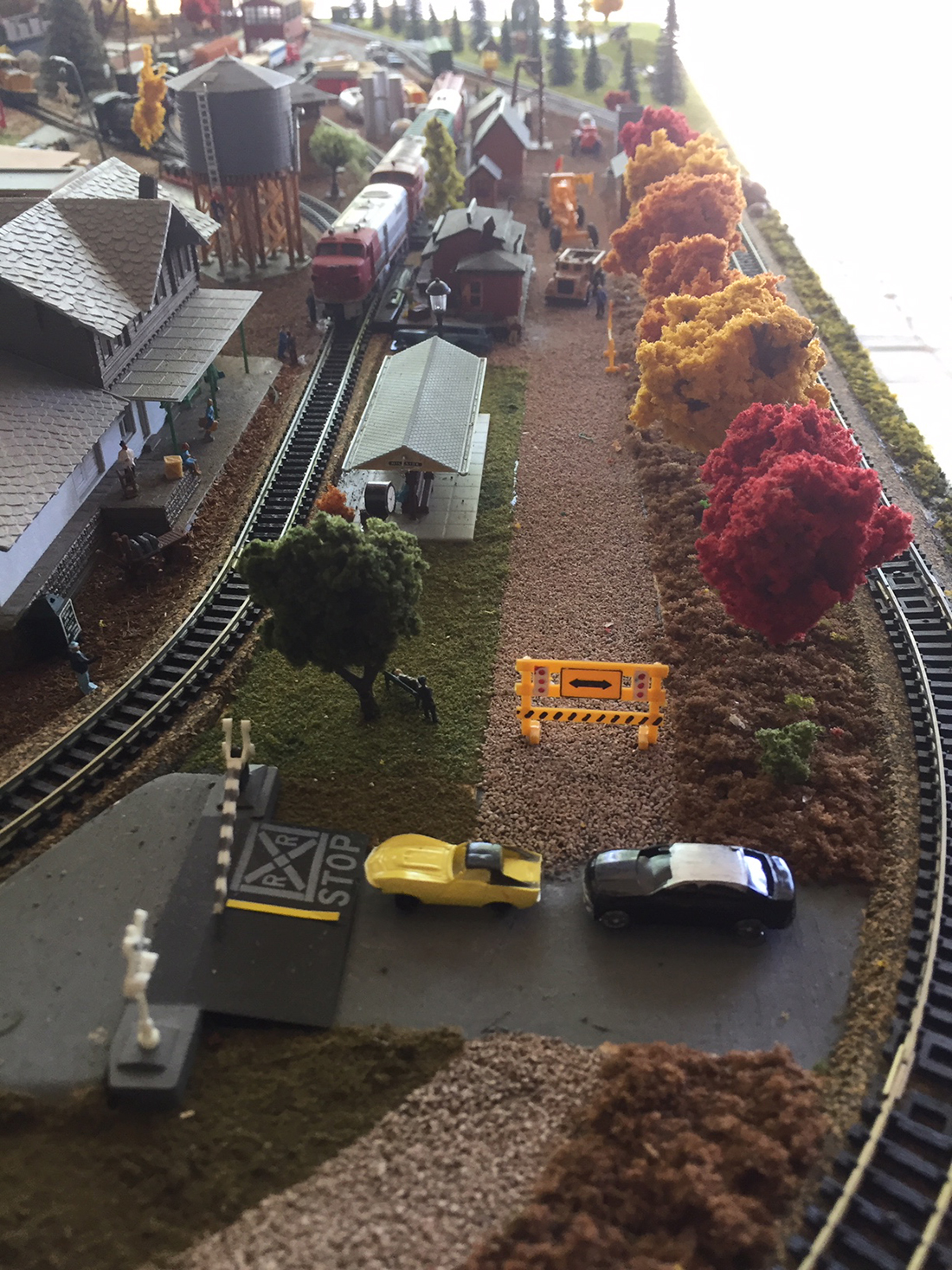 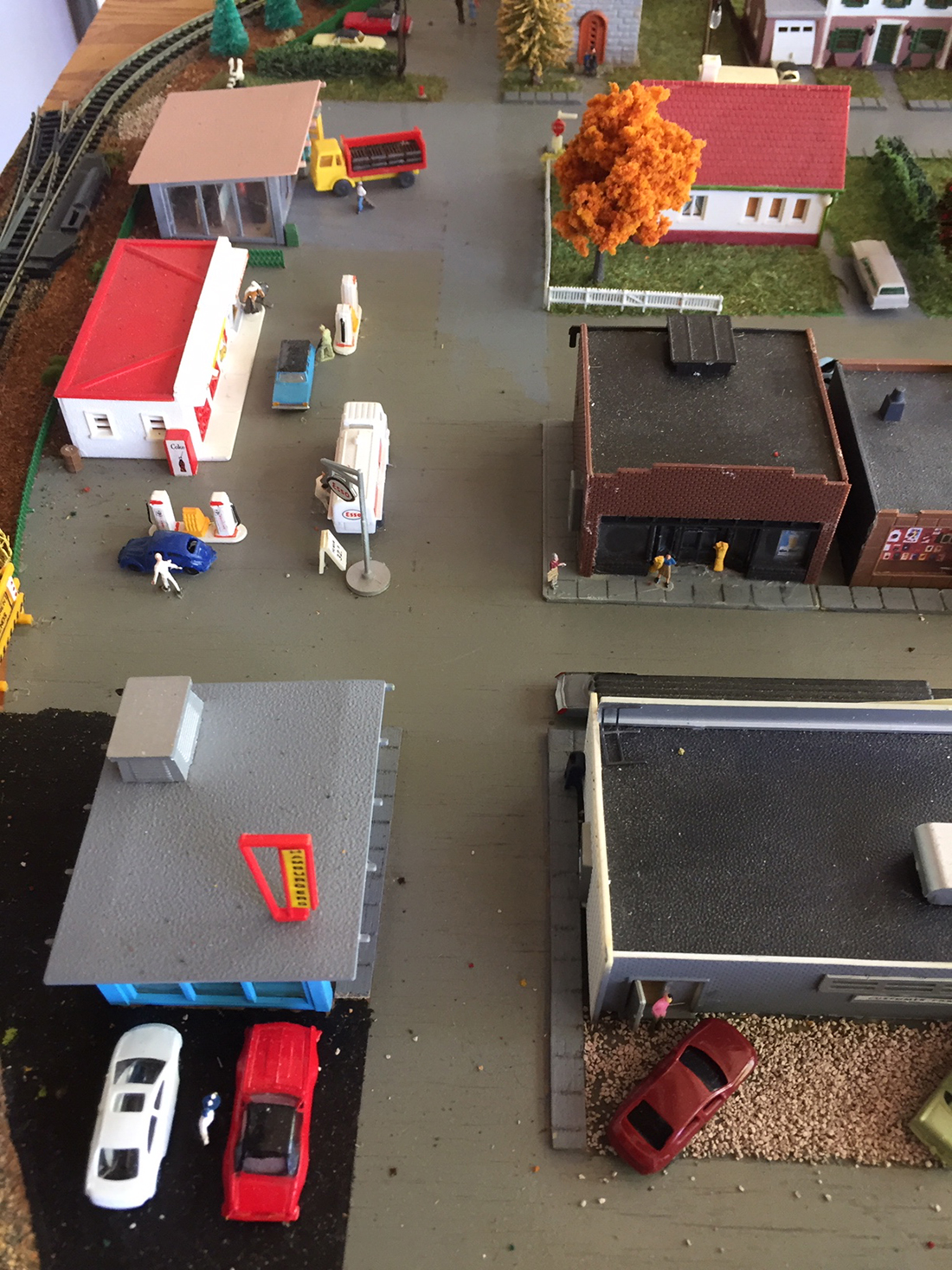 Now to to another Bob (His last post is here).

My new around the wall layout is coming along slow and steady.

When I started laying track and dropping feeders, I realized that my old way of doing it (positive on the outside; common on the inside) could easily get messed up.

So I took my clear inspection car and put a piece of red tape on one side and a piece of white tape on the other. I roll the car along as I am dropping feeders and I can see which side to put the feeders.

When I first started the remake of my layout I bought five different quarts of flat latex paint: two blues, a green, and a brown.

The brown turned out to be closer to tan so I went back to get another quart of paint. While looking through the brown paint samples, I found one called Rusted Earth. I thought that might do what I was looking for.

When I got it home, I tried it on a scrap of wood. When the paint dried, I thought that would look great on the tracks.

The picture show the first coat on a section of track. To my old eyes it looks like a decent representation of rusty rails. 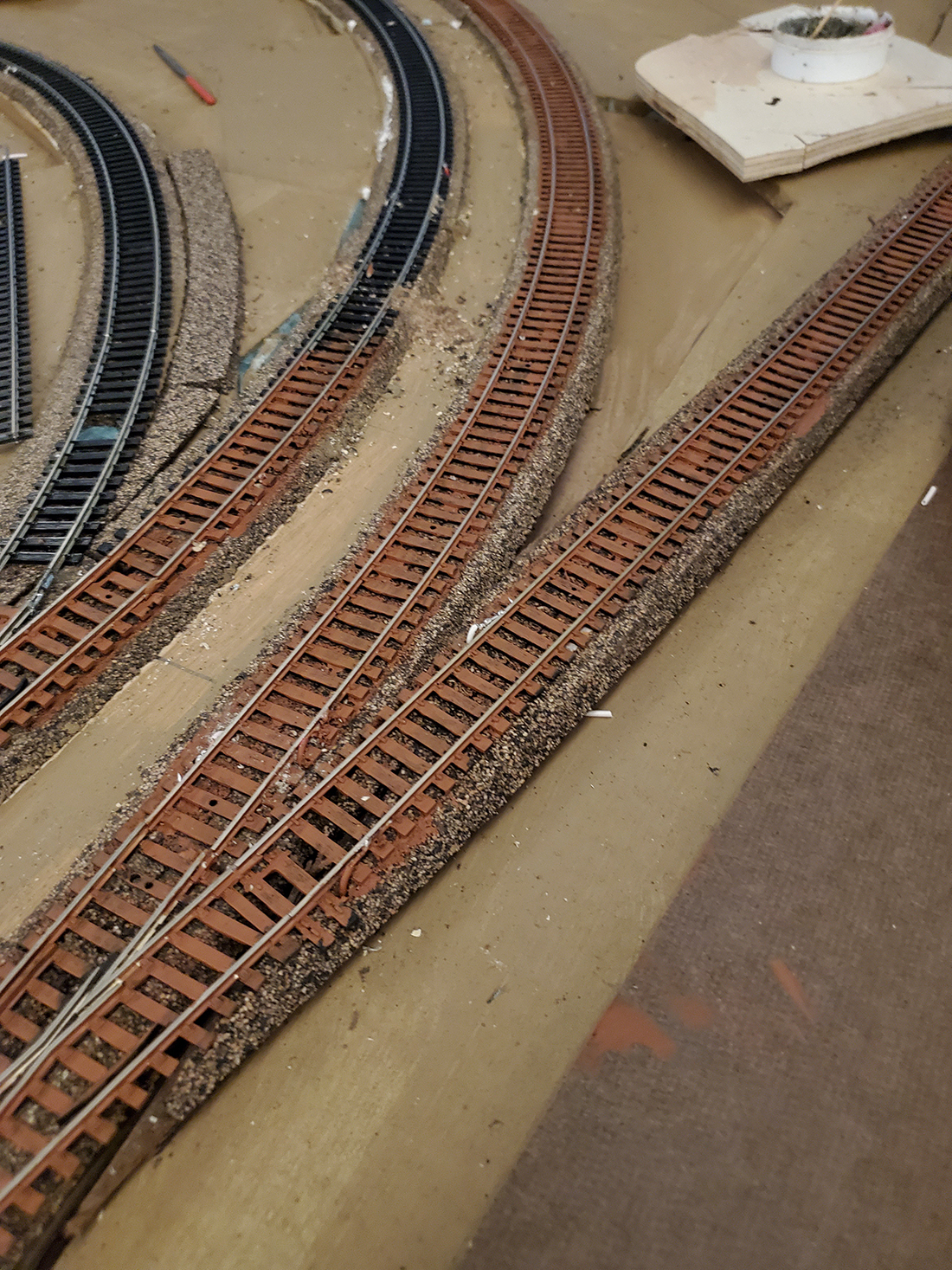 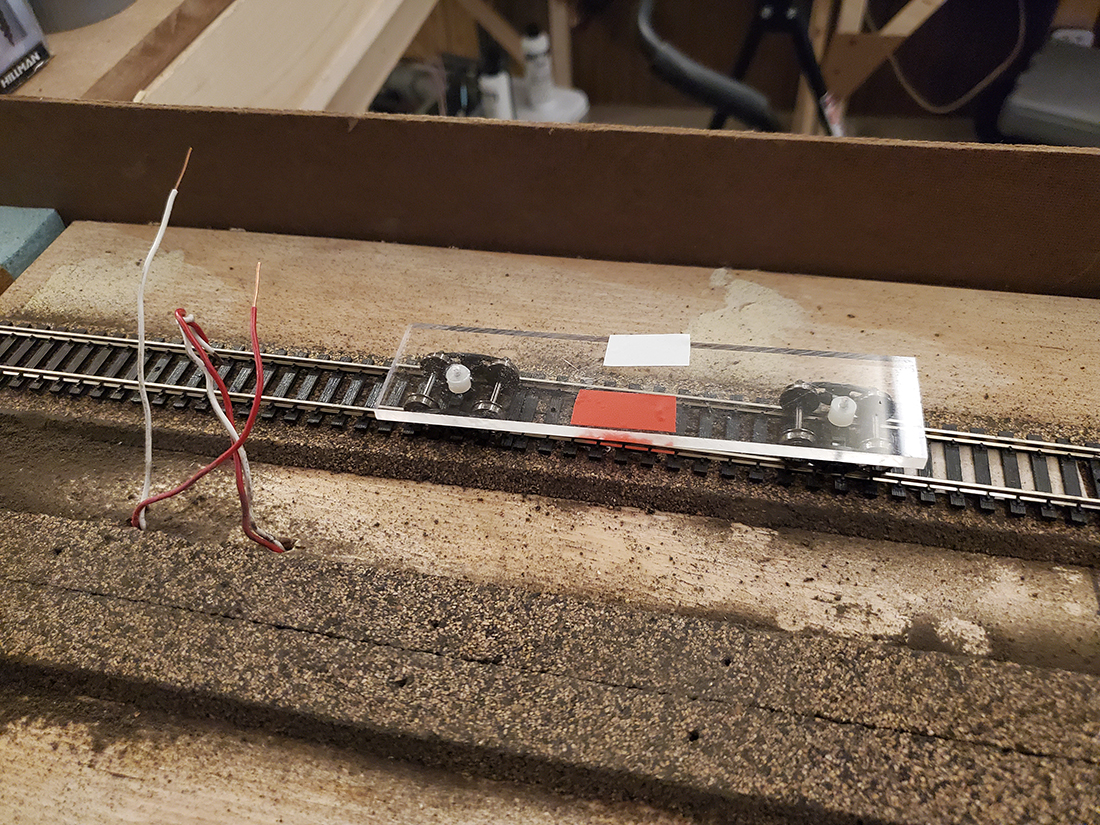 A big thanks to Bob, the other Bob, and Jim.

Jim’s madse a great start, for me, having a theme is the ingredient that transforms a layout.

And don’t forget the The Beginner’s Guide is here if you want to start having your own fun.