Steve’s been back in touch after his last post.

He’s been kind enough to answer your question – here’s his last missive if you missed it.

“MANY THANKS for the kind words & encouragement!!! I’ve been working on the layout for about 3-1/2 years now. Mostly in the dreary Cincinnati winter months, as I fly RC planes & helis in nicer weather.

The cost is “classified”. If my wife found out I may have to move me and the layout to the dog house.

My words of wisdom: plan, think small and DO SOMETHING, Planning, having an idea what you want to do, helps visualize the end result. Yes, plans change, but the overall concept/ scheme of my layout didn’t.

Think small! Not so much in terms of scale, but in terms of trying to do anything. Building & painting the buildings seemed daunting, so I started with one, then another, etc. Same with trees – there’s probably several hundred trees of different sizes/ shapes.

Starting with one (whether building or installing), then another, then another breaks it down into manageable parts.

For the “Do Something”, I didn’t know how to color rocks, so I was VERY hesitant to get started. I started experimenting with rock coloring. It was terrible the first few times, but I kept trying different things until I hit upon a combination I was satisfied with. Had I not “done something” (even though wrong, at first) I’d still have white plaster castings.

And now on to Chris.

I do love an update – and I do love it when than update is nothing more than the very first stages, because this hobby is all about making a start.

It has been a bit stop start but the attached photos show what progress I have made so far.

I bought a DCC Ready Hornby Flying Scotsman set from the toy department of a local department store that was selling them at a knock down price.

The store had to sell their stock or return all Hornby items as Hornby had changed their policy to only selling either online or through model shops.

Hooked and before they sold out, I went back a couple of days later and bought a DC West Coast Highlander set, again at a knock down price! That was the easy bit.

Having Triang trains many years ago the bug was there but with family, career etc. it was buried deep. This was the opportunity to have another go. Fortunately I have a lovely tolerant wife who like me has always had an affection for trains, especially steam.

So after discussion and the measuring of rooms, layout size etc. it was agreed that a 6 x 4 table with castors on the legs would do the job.

After a few mistakes the result was this, albeit on reflection a little over engineered…. 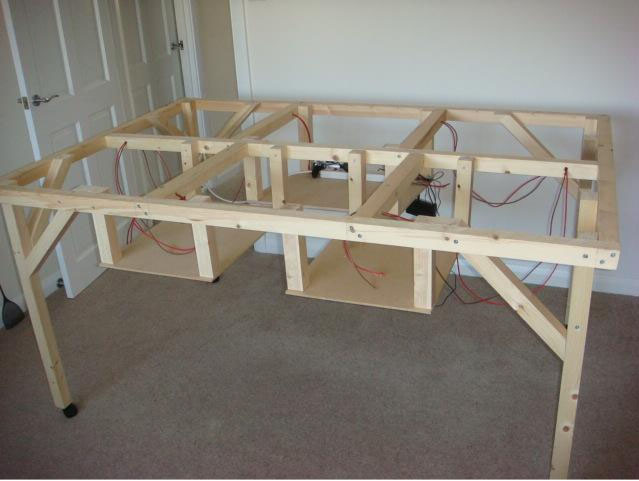 Thanks to your members many words of wisdom you will see that I was already thinking of converting to DCC and was installing a bus wire.
Much track laying and relaying went on, most of it trying to use too much track and being far too complicated. 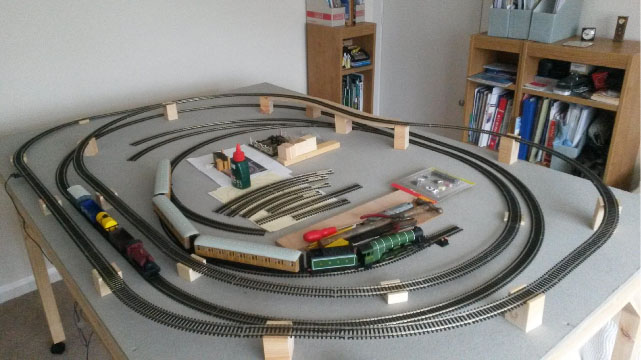 The lesson learnt was of course KISS, ‘keep it simple stupid!’

So the up to date situation is this… 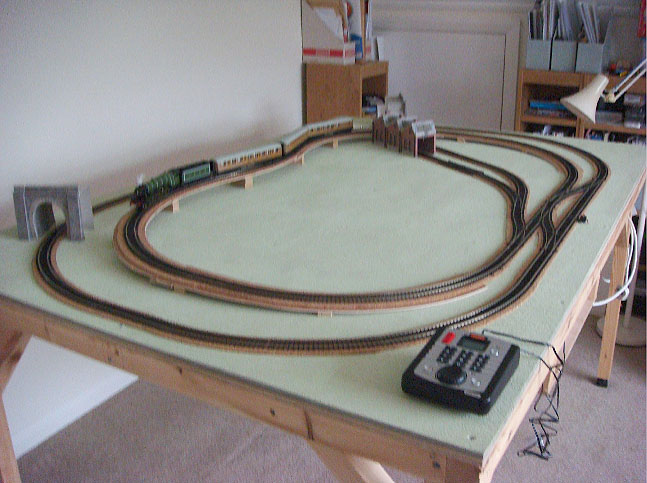 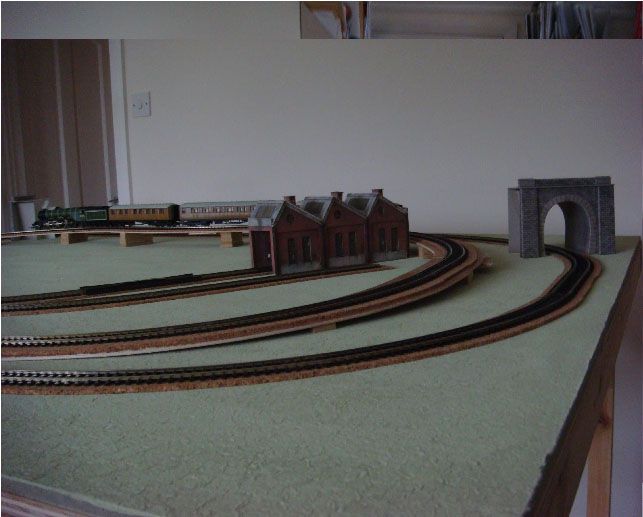 I have converted to DCC and bought a Hornby Select controller, TTS decoder for the Flying Scotsman (FS) and am waiting to hear from Hornby as to what TTS Decoder would be suitable for the 0-4-0 West Coast Highlander.

I encountered a few problems with the conversion to DCC. Fitting the Decoder to the loco was not an issue but the speaker supplied with it was far too big. Again one of you members came to the rescue in an article where they said they used the speaker from an old mobile phone. Bingo! With a bit of trimming it fitted beautifully by the funnel.

First testing did not go well. In spite of checking all wiring etc the FS seemed to have a mind of it’s own so after two frustration day I phoned the Hornby help line. After much checking and re-setting the problem was found to be the small chip in the DC connecting rail that I was using. Once this was removed full control was achieved.

Having built the Engine Shed and Tunnel Entrances I am now moving on to more scenery building.

A huge thanks to Chris and Steve.

And if you want to make your own start, the Beginner’s Guide is here.

PS Thank you for all the comments on the new ebay cheat sheet – it loads lots quicker now.