Got another 6×4 dcc layout for you today.

Jim’s pics are a tad small – but I loved what he’s done here:

I read the post today from Chis and was surprised at the similarities to a layout I started in August.

My wife and I have a summer home in Ohio. This year due to medical issues my wife encountered (surgery, now chemo, but all will be well when treatment completed!!), it will be April before we can go back to our Florida home.

With winter closing in I wanted a hobby to keep busy. I have always had an interest in local history and I like working with my hands. The result was the creation of the Holland Odessa Rail Road. A mythical short line set in September 1908. Half of the line is located in NW Ohio and the other half is west central Florida (where our two homes are located).

In 1908 NW Ohio was in the grip of the industrial revolution. The two canals in the state still operated (both destroyed in a massive flood during 1913) but trains were definitely the primary movers of goods, opening the country up from the east coast to the west.

Ohio at that time was amazingly the primary supplier of oil for the country. The glass industry became centered in Toledo because it was able to get low cost ‘waste’ natural gas from oil producers trying to get rid it to run the glass furnaces!

A train ‘flag’ stop called Holland located 8 miles west of Toledo was a center for canals built to drain a massive swamp called the Great Black Swamp. It had been over 1,000,000 acres at one time. By 1908 it was mostly drained. Holland, named due to the canals (now deep ditches) is where our summer home is located.

Florida was at least a century behind Ohio. Every disease you can think of existed. Malaria, yellow fever, small pox and on and on. Moreover between the swamps and man killing critters, humans had a hard time just existing yet alone developing. Then in 1880 the trains arrived in the Tampa – St. Petersburg area (St. Petersburg was named by the man who’s railroad first arrived in the area).

However, in 1908 a little town called Odessa, (which is were our Florida home is) located12 miles northeast of Tampa was bigger with 2,000 people, being a center of logging for Cypress trees as well as Pine trees. One Cypress tree was reported to have produced a board 56 feet wide!

So that is the basis of the Holland Odessa Short Line and here is what it looked like at first, yep it is 6 feet by 4 feet. I added a second sheet of foam after this picture which you will see why below. 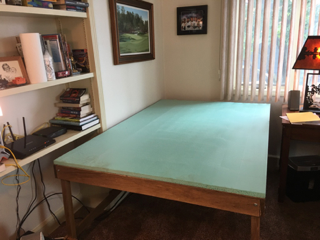 And here is the design (an Atlas plan I followed, buying their 83 code kit for track work). Looks a lot like Chris’s doesn’t it? The control panel is hinged and folds down for ease of working on layout. It is DCC operated by a NCE Pro Cab. Castors allow moving completely around the layout while working on it or showing the layout from the other side. 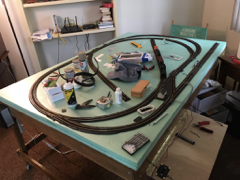 Below you see the reason for the double foam. I’ve modeled part of the Miami-Erie canal which went from Toledo to Cincinnati Ohio. The double foam sheets allow me to make canals, shape the land down from the tracks as well as putting additional foam on top in areas to create more dramatic hills given the size of the layout. The use of Atlas electric turnouts allows doing this without any control problems. 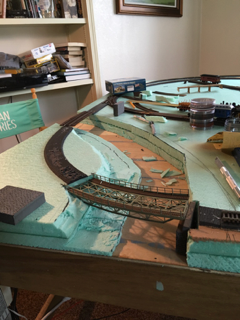 So here we are today: 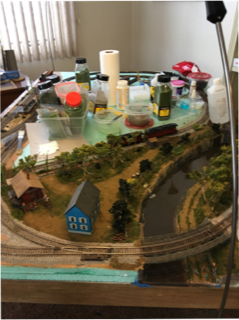 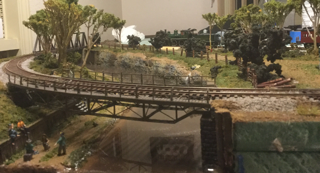 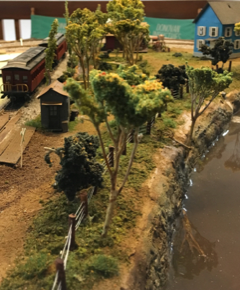 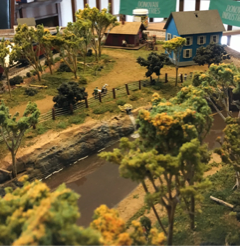 Hope you like it. The advice and instruction help in your blog is really helpful. In addition there are great video’s on YouTube as well as the model kit suppliers web sites such as Bar Mills and Campbell. I am really enjoying put this project together.

To complete it I am including family and friends into the time period. I started a three ring binder that holds all the history notes, period pictures and layout design notes developed to make the various parts of the layout. It has a narrative I am writing as I go about the ‘The People of the Holland Odessa R.R.’

In it I transport my family members and friends back in time and write what they might have been if they lived in 1908 and worked either on or around the Holland Odessa Railroad.

So far several people have gone back in time. For example my son and daughter-in-law have been transported back as the caretakers of the Florida Station. There they meet Thomas Edison, get into the power generation business and in time move to another small town called Denver. Their daughter goes on to be a world class skier.

On the Holland Odessa R.R. everyone transported back has an great adventure, fun and enjoys being remembered for making a difference! What more can you ask?

“HI Alistair… part 2 of the accident from last week , I have also taken note from one of your member who suggested taking a picture of a bridge , then downsizing and adding it to my Bridge ..it came out very well , just needs a bit more work on it , but a great idea , also a tip when buying on line , make sure you know what you are ordering… As said before , a bit of fun , never does any harm , and well maybe I sniffed the sherry bottle again LOL

A huge thanks to Jim and Dangerous Dave.

Jim shows just how much you can pack in to a 6×4 dcc layout.

And if you’ve picked up lots of good stuff over the years from the blog, you’ll love the Beginner’s Guide – it’s jam packed with all the best stuff.