Danny has been in touch again – his last post is here.

I have made some real progress since my last post. 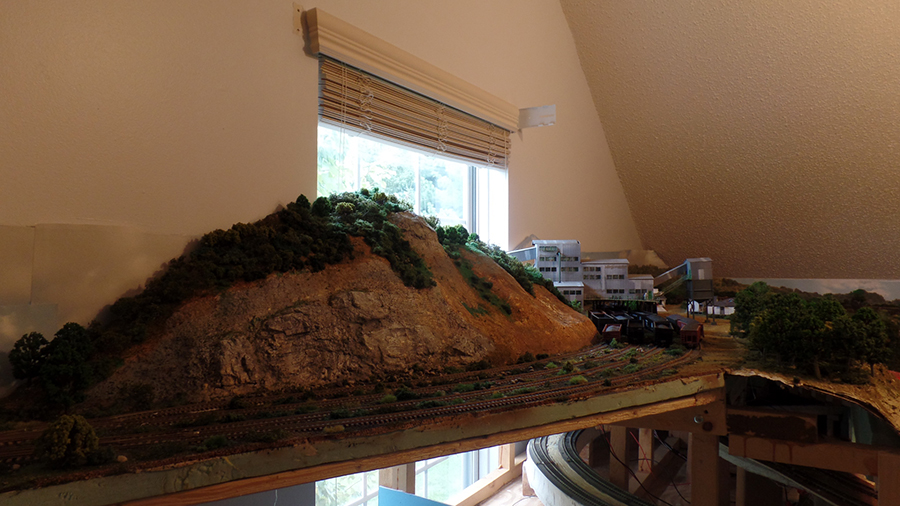 The first photo is my mine installed. 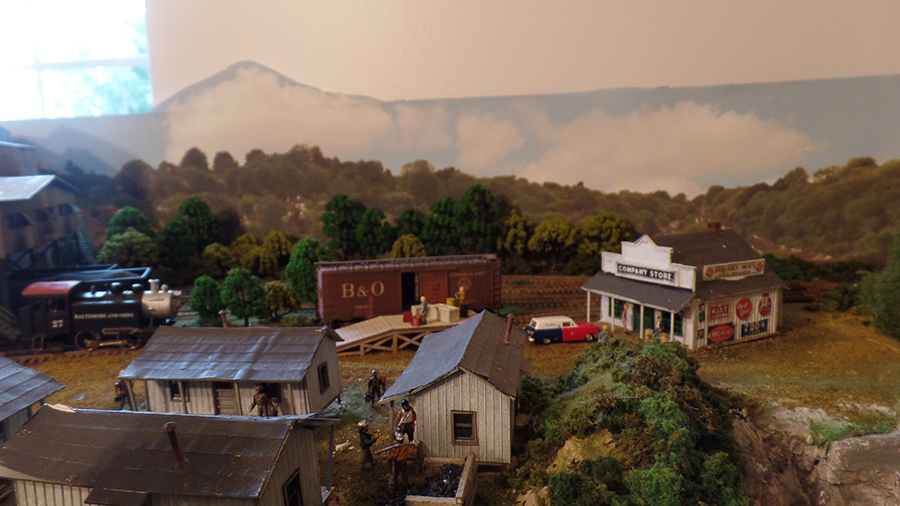 The next is the miner houses and company store. 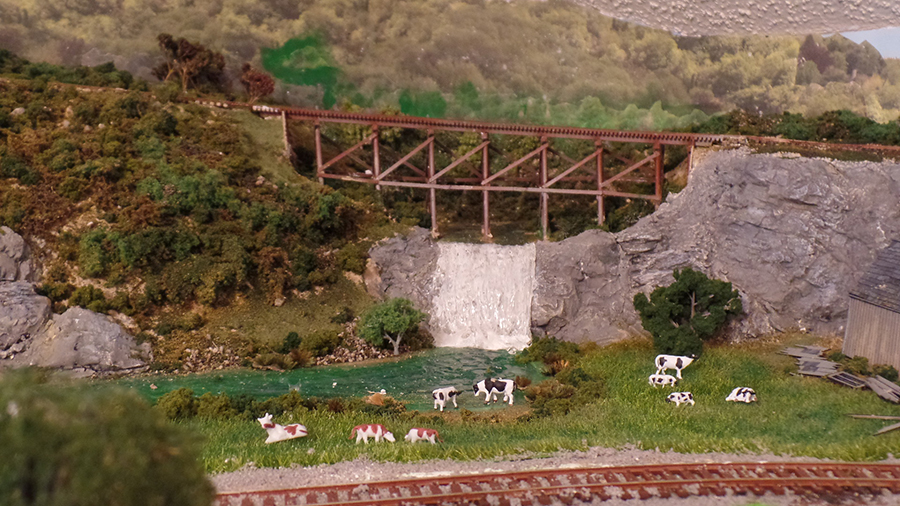 Cows are in the field next to the stream. The kit bashed trestle is in the background. 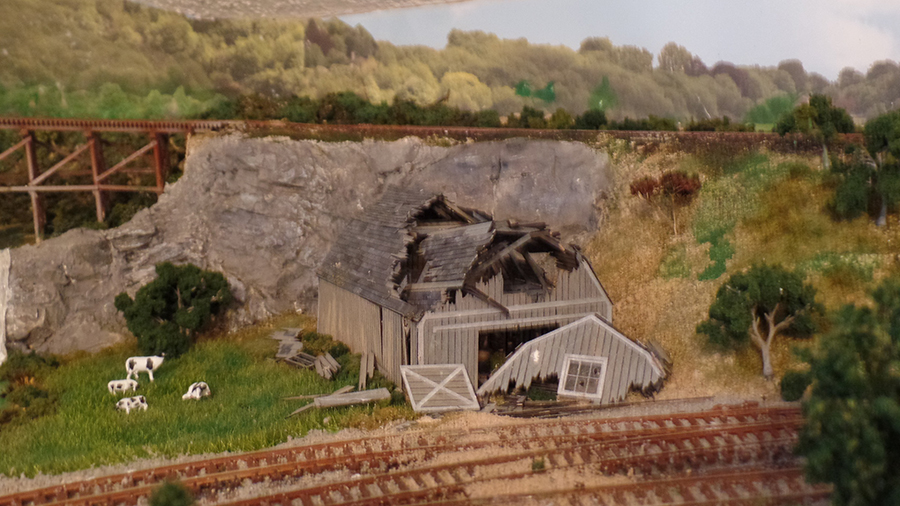 An old barn is by the field. 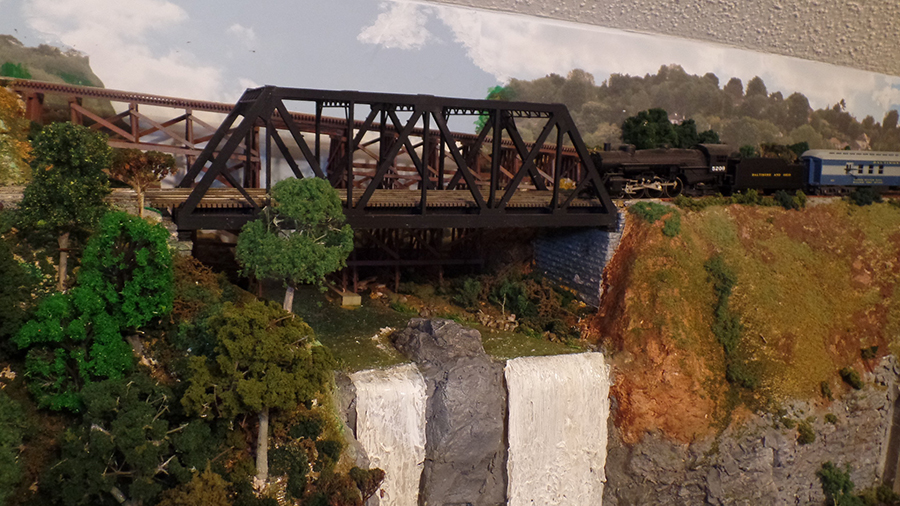 This is the lower stream. The bridge is cut down tunnel portholes. 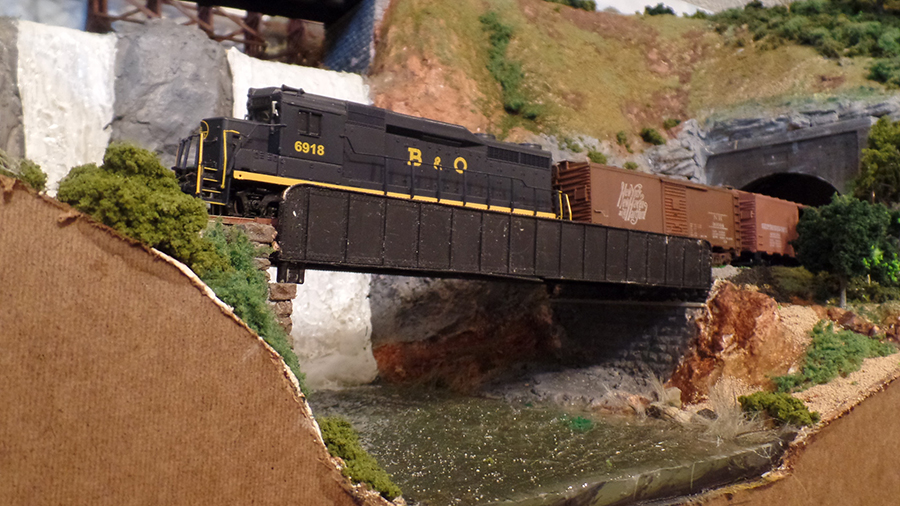 The river crossing in front of the falls.

Bridge and other kit bashed trestle above the falls. 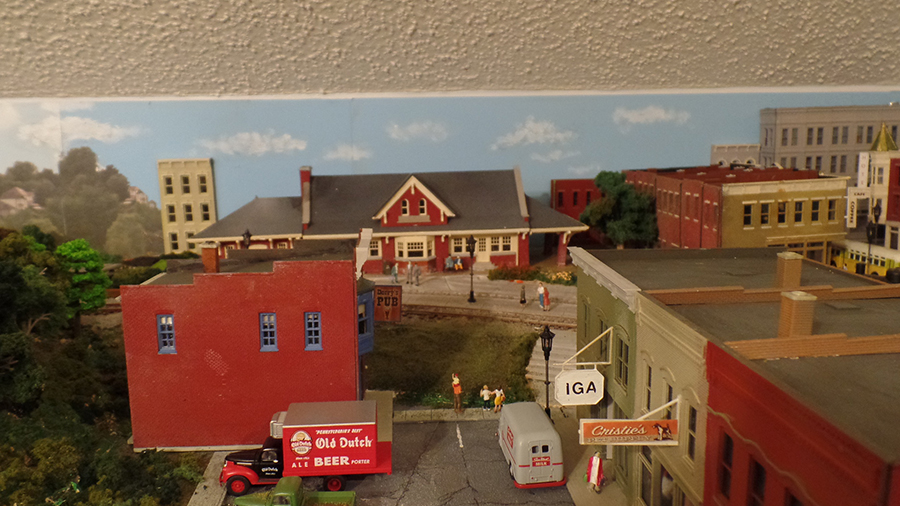 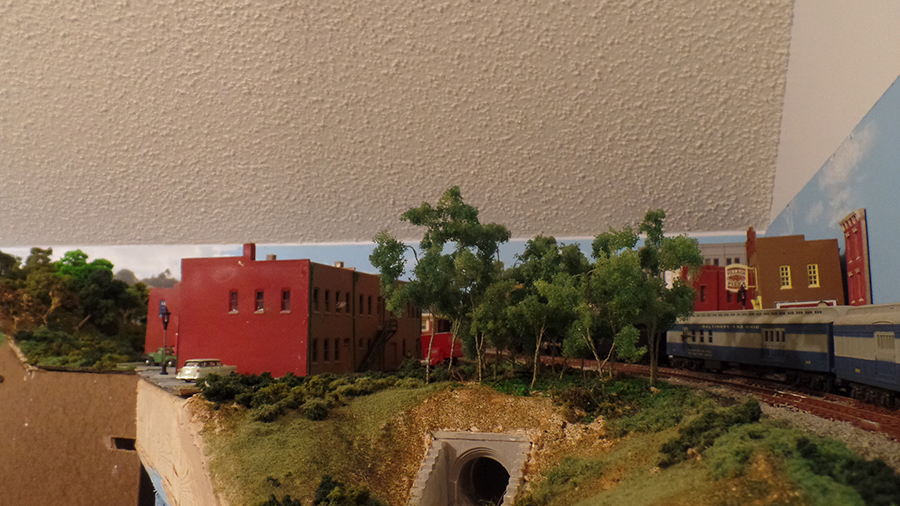 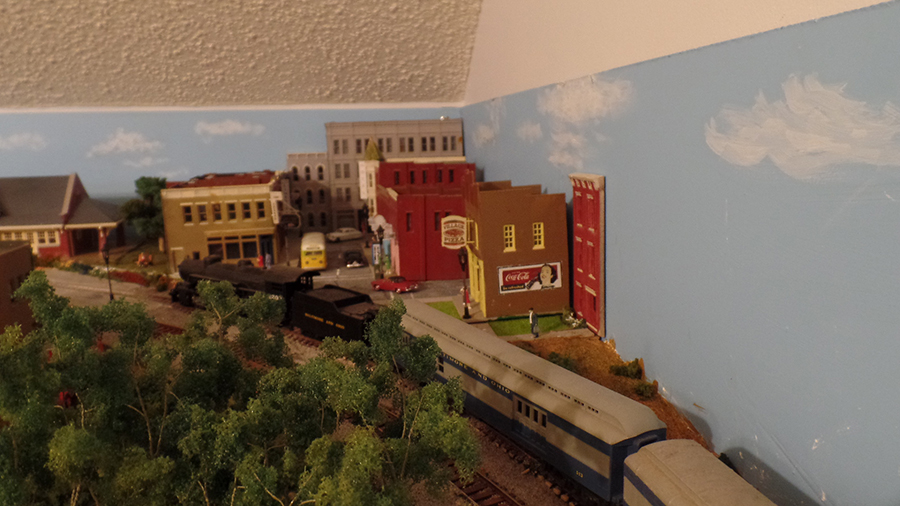 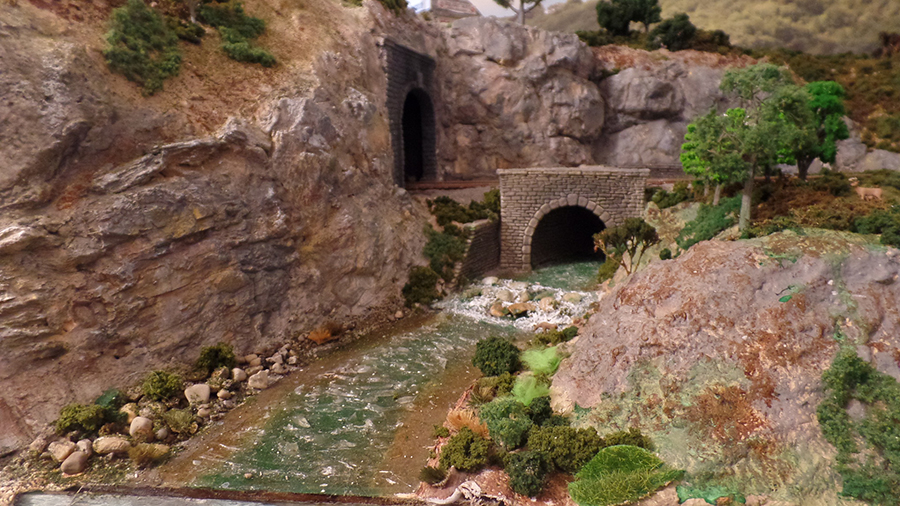 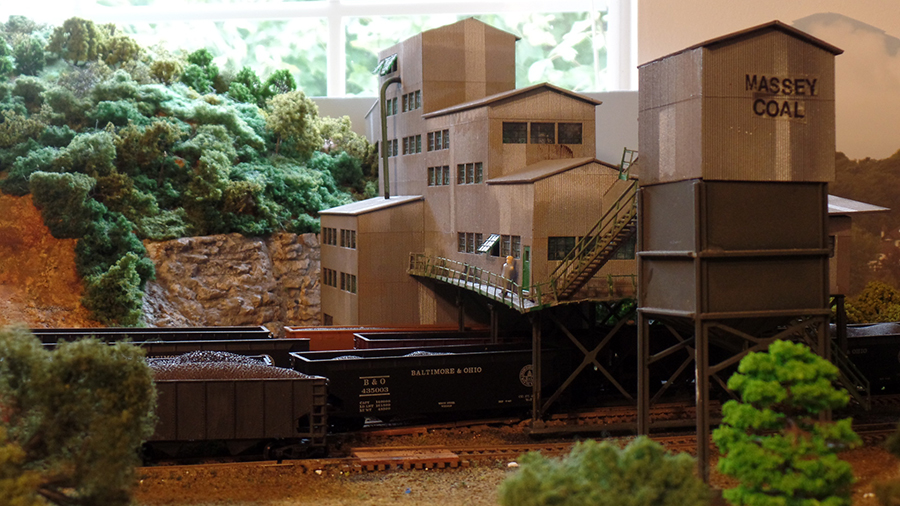 I have more walls and a peninsula to go. the peninsula is two levels.

I have been meaning to send this for awhile. So here goes.

In reading the web site with the people who respond to it, I would like to send these pictures out to them.

The pictures below are of a switching layout that is two feet wide by eight feet long and is mounted on only a sheet of HOMOSOTE(TM) board.((YES IT IS FLEXIBLE AND MOVES WHEN CARRYING IT. Support it when using it .

This is for ease of transporting it to Boy Scout Events ((Railroading Merit Badge Classes)) and train shows as a demonstration on how to have fun with Model Railroading.

The first photo I call it the West End of the switching layout. It has the DC power supply or power pack. There are no structures on here (on purpose) to show the track plan.

The track near the power pack is the track that the trains enter the layout on and leave at the opposite end.

This is a game layout. As you are looking at the photo, on the right side is nine train cars = one of each type to be used.

On the table is some cardboard with white tags. These are the temporary buildings.

Starting at the opposite.

No structure for them to go to.

This will keep people busy who say they have no room for a train layout. This also may be added to any HO SCALE train layout you already have.

The game here is to take a train car or two and place it anywhere you like and at any of the industries. The little switch engine has to do the work to spot it at the correct industry with the same number (type of car)

Next time use different cars and maybe a few more cars and time yourself on doing the job.

The person with the least amount of time or moves of the engine, WINS that game. HURRAH!

When you are done “switching = Shunting the cars” take the engine and train cars off the board and stand it up against a wall or slide it under a bed or table somewhere. Out of the way place to be used again again to have fun.

Bring friends over to join you doing the switching. I bet they will want to try it for themselves. 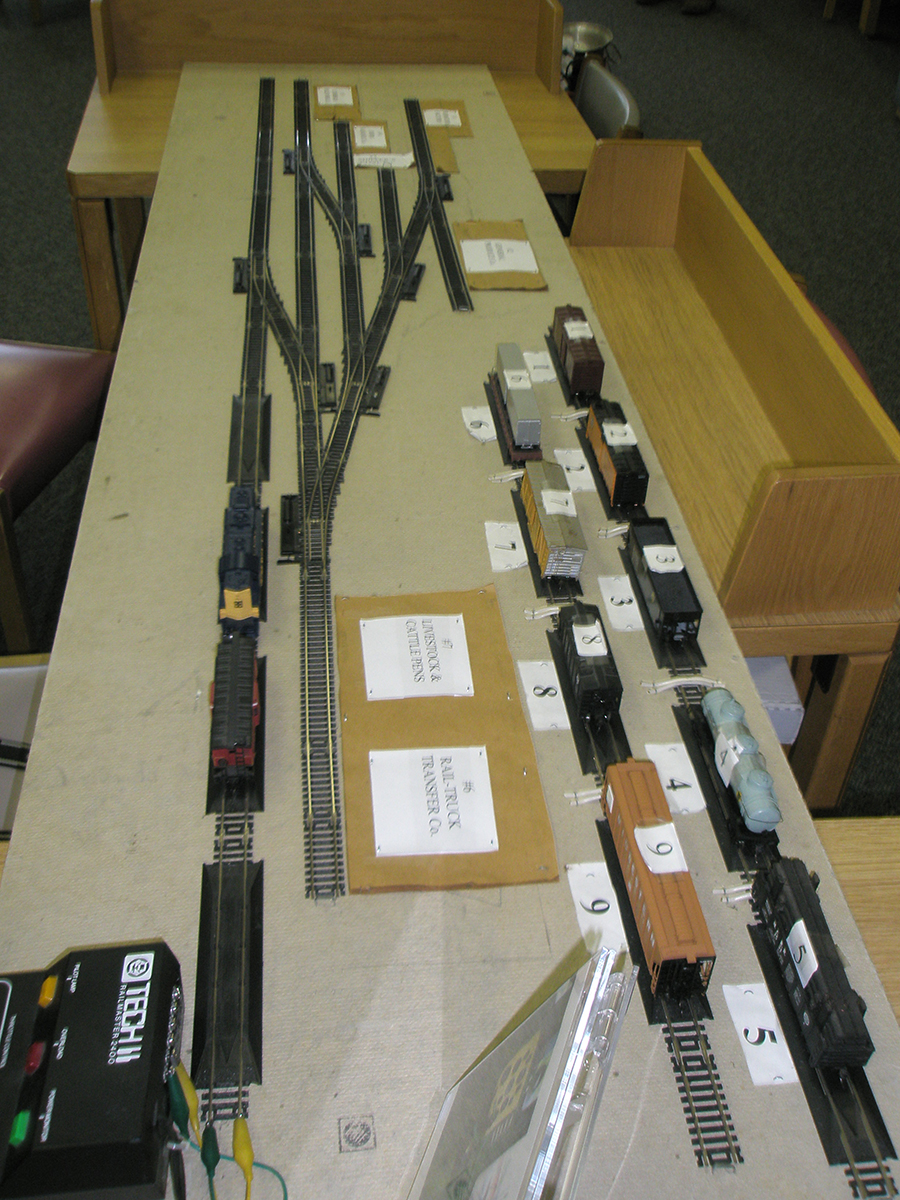 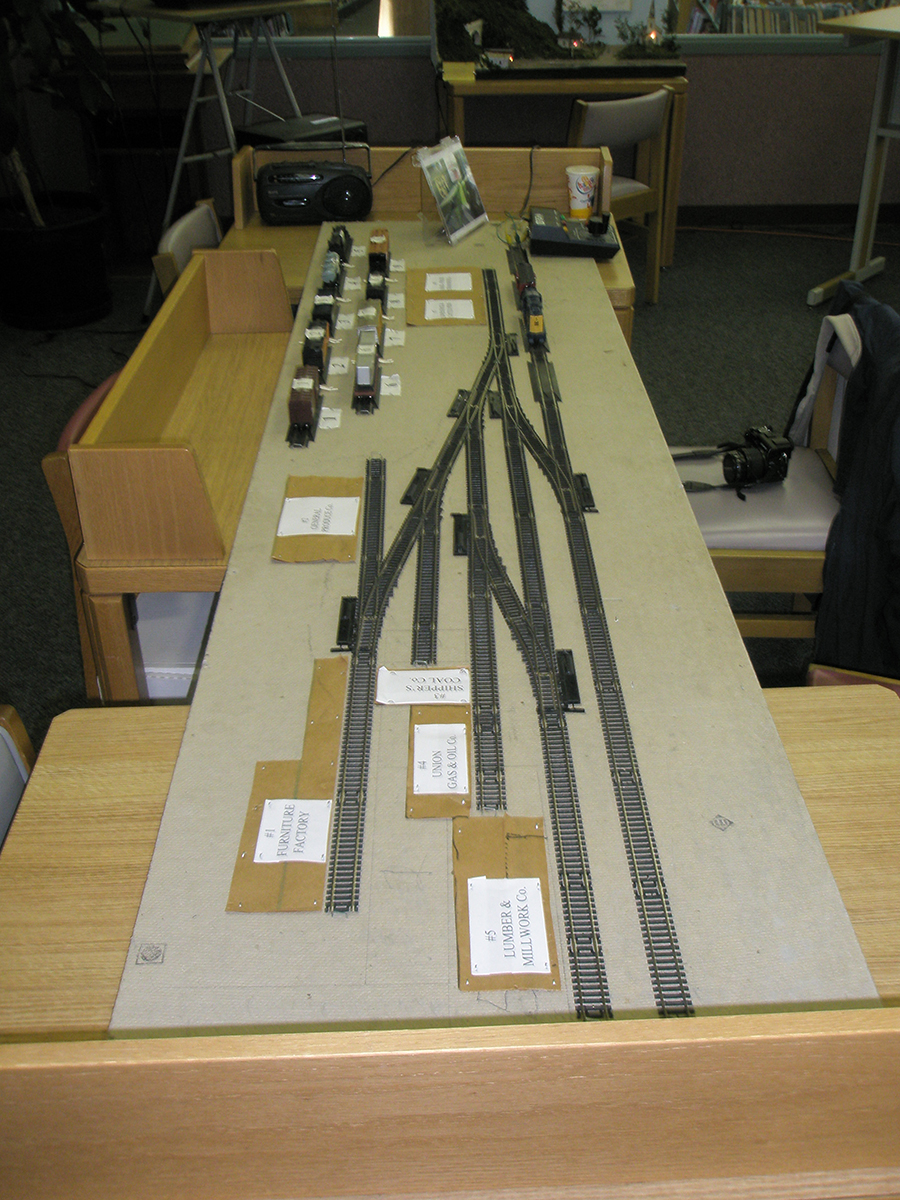 I have just uploaded my part 7 of the re build on the layout, in this video I show how to wire up lights, different connectors, adding a bridge portal with background, and a few more tips.

It is getting very near to being completed now, so think that the next one will be the last in this series.

Hope that some of my tips have been useful to some of the members, and I have tried to show and answer a lot of the questions asked.

A big thanks to Dave, Don and Dan – I loved Dan’s update, particularly the old barn. Touches like that really make a layout.

And I can’t believe Dave is starting again!

If you want to get started – just like Dan did, the Beginner’s Guide is here. Grab a room, grab the guide, and get going.