Dean’s LED lighting ‘how to’

“Greetings from Dean, across the pond.

Lately, there has been a lot of discussion on this Blog about LED lighting, and in this post, I talk about LEDs and how I use them for lighting building on my N scale layout.

An LED is a special electronic component that emits light when current is passed in the correct direction. If you apply a small DC voltage to an LED (positive voltage to the positive lead, negative to the negative) then begin to raise the voltage, nothing will happen until you reach the working voltage of the diode. Then it will begin to conduct and emit light.

But, unless you limit the current through the diode, it will quickly heat up and destroy itself since it is virtually a short circuit. For many LEDs, the working voltage is around 3 volts and the maximum current allowed is around 20 mA (0.020 amps). When you buy them, these characteristics, working voltage and maximum current, will be specified by the seller.

Below is a photo of some LEDs I have used. The positive lead is always the longest of the two. A resistor is also shown. Typical sizes are 3 mm and 5 mm and I buy these in bulk packs of 100 from EBAY for $4-$5, postage included. Thus, they run around 5 cents each. Resistors in bulk packs of 100 are about 4 cents apiece. Also shown is a box of the two sizes in 5 colors that I got for around $5, postage included. 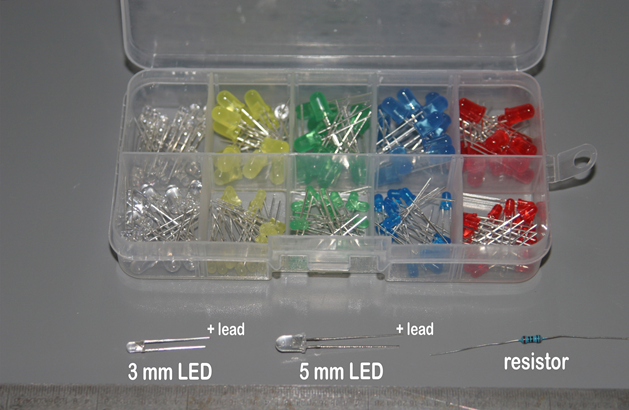 You can also buy 1 mm LEDs usually with an included resistor and leads which are meant for model railroad hobbyists. I’ve seen these at $7.50 plus $2.50 shipping online. Or $10 each compared to what I pay for an LED and a resistor, $0.09. That’s why I wire my own! Lots of businesses sell bulk packs of electronic components for next to nothing on EBAY. Often these are shipped from sites in the US in a few days, although for some you have to wait for shipping from China.

Below is a simple circuit to show how an LED is wired. A battery, a 1000 ohm resistor and an LED. I just placed them together without solder to illustrate the circuit. 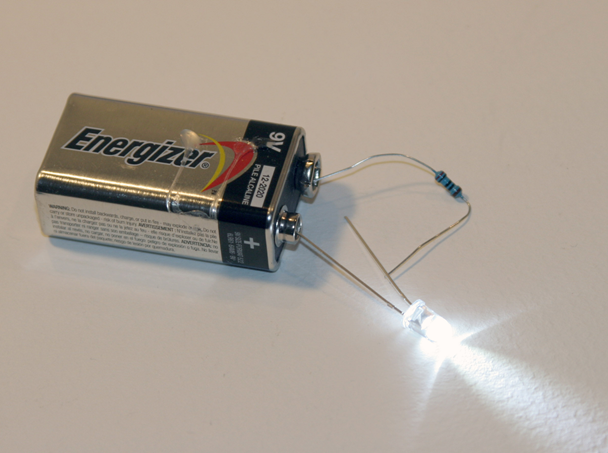 The value of the resistor can be calculated with the formula

Then the resistance is

To change the voltage to the LEDs, I bought a variable voltage supply (again from EBAY) that is shown below. I use a 9-volt “wall-wart” from an old piece of electronics to supply the voltage to this variable supply. (See the circuit diagram further below.) The voltage supply costs around $5, came with a Lucite box, and indicates both voltage and current. Make sure you connect the correct polarity to the variable supply from the wall-wart or you may destroy it. There is usually a diagram on the wall-wart that indicates which is the positive lead. 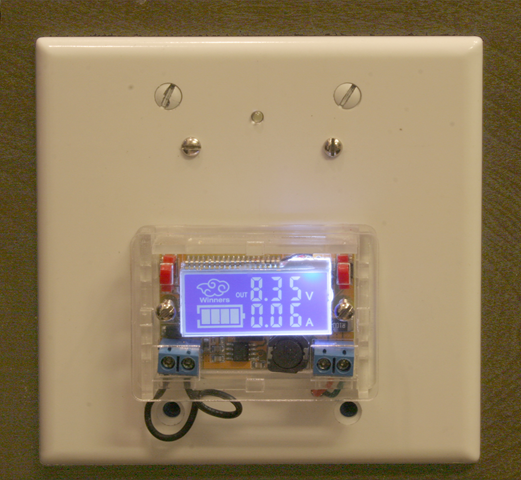 I use a regular blank electrical box covers (above) extensively on my layout. To hold the covers, I saw a blue plastic electrical box down to a height of an inch or so and glue it into a square hole cut in the fascia panel of the layout (below): 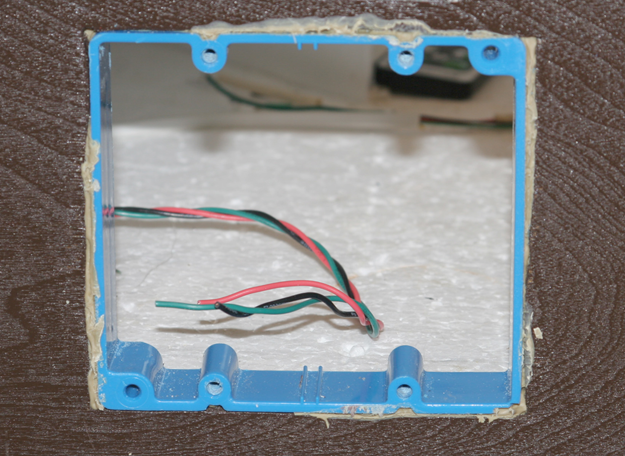 Three wires, which I twist together by chucking them in a drill, run between each of the boxes on the fascia. The colors are:

green is ground; red is to the LED lights, +0-9 v DC; black is +22 v DC for switches (I’ll describe my capacitive discharge circuit in a later post).

The wires terminate in junction blocks shown below (note the forth connector labeled yellow is for future expansion). The junction block has a plastic cover and I attach a printed label to this. 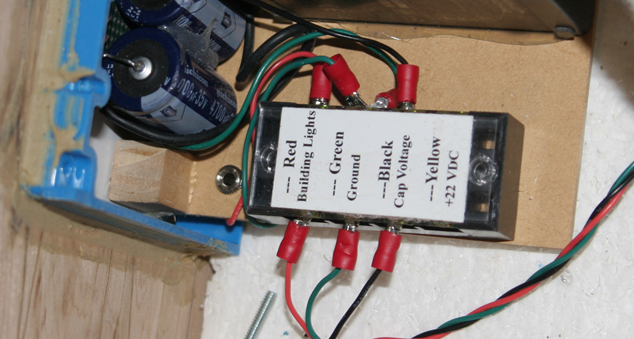 Here is a sketch of how the wiring goes together. Note that I can connect any number of LEDs and associated resistors to the red and green wires. Normally, I use from two to four LED/resistor pairs for each building.

Below are two lighting examples, a mine (built from an N Scale Architect kit), and a New Model Power freight station kit. The mine is basically four boxes, put together. Inside each box is an LED/resistor built up like a stick. The two wires are insulated with shrink tubing and the height is adjusted so that the LED sits at the top of the box. The light is then bounced around the building. The freight station has two LED/resistors.

The base for the mine holds the four sticks and interconnections are made in slots below the base. In this photo I used a 9-volt battery to light them as a final test. 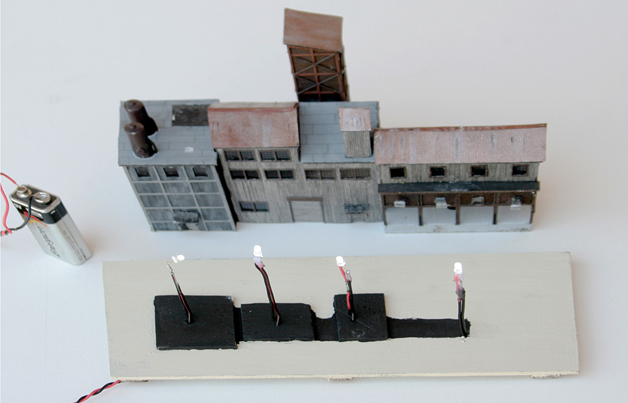 The mine lit up in all its glory! The kit is a model of the Eagle River mine south of Minturn, Colorado. I first saw it in 1974 and the buildings are still there. It operated for about 100 years until 1984 and is a pollution source. 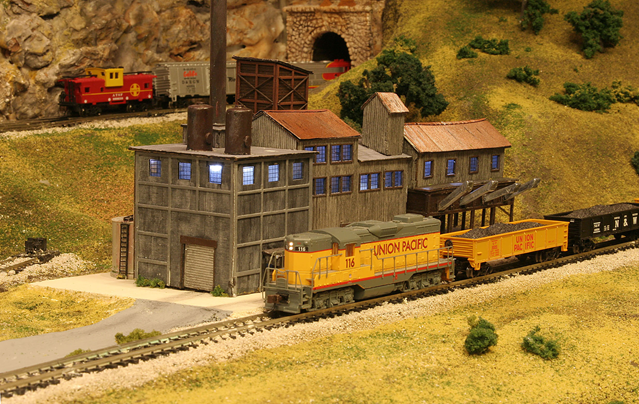 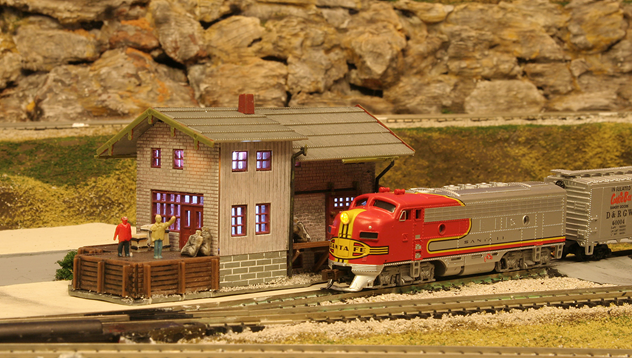 The layout is lit by two banks of fluorescent lights and five 110-v LED flood lamps whose intensity can be varied. When I operate the layout, or photograph parts of it, I first vary the overhead lights and exposure to give what I want (daylight, dusk, night) then adjust the LED power supply to give the right effect. I place a camera on a tripod, since exposures are often a few seconds.

A huge thank you to Dean for taking the time to do this – I know lighting is always a topic of conversation on this blog.

And lots more like this in the Beginner’s Guide, if you want to get going on your layout.

27 Responses to Dean’s LED lighting ‘how to’