Frank has been kind enough to send in a video of his superb video.

If you missed the pics, they are here.

Here’s what he sent in with the vid too:

“Ok here it is, I finally got some time to sit down and wright something out.

First thank you Al for posting my pics.

And thank you to everyone who commented on them. I cant enough about the kind words you all had to say. It speaks volumes to a rookie.

Ok the layout is on a 4×8 and a 4×4 in an L shape its pulled out from the wall about 2 ft in witch I added a raised platform for the back part of the HO scale. Oh by the way the top is HO and the bottom is O 27, Lionel.

The Lionel I’ve had since I was about 7. Through the years its been up only temporary. I’ve always wanted to do some sort of layout. But never got the chance.

The Foam board, I lucked out with that. We had some construction where I work and I plucked scrap out of the dumpsters and I was surprised at how much there was. I originally was using it to insulate a crawl space but there was so much I decided to start on my railroad.

I first laid out a track platform for the Lionel Train. I wanted to keep it simple, (no switches and no branches). Not ready for anything too complicated. I knew I wanted mountains, It got a little out of control.

But anyway its construction foam its different and better than styrofoam.

I stacked it up where I wanted and glued the layers together.

After they dried I carved them. (Tools) Drywall saw. Shark tooth saw.

I’d jab a screw driver or a drywall saw or the glazer tool into the foam and break off a piece then another. Where the foam broke off made nice rock like formations, I also would take a pointed edge and scrape it causing the foam to chafe and break off also with good result.

Shallow cuts one inch apart all the way across to simulate layers.

Paint added a little water to thin it and spry’d a base coat on the foam.

I bought a cheap airbrush witch turned out to be a great choice.

Bought small latex paint samples at Lowes. For a couple of bucks.

And started painting light layers and just go over the same area a few times to get the effect you want.

Light coats first you can always put more on but you cant take it off. Use earth colors and flats.

The O gauge tunnel entrance is actually HO that some one gave me after I had it done but I put it in anyway. I made it work.

The HO tunnel at the right of the bridge goes through the mountain and loops around and comes out behind the upper spring.

Two big mistakes I made:

I didn’t think about making the bridge open in the middle so you could see thru it.

And I should have put it back farther because the lionel bridge is behind it.

3 rd mistake was I forgot to put the rail wood beams down the length of the top of the tresell. (Not sure what there called). The Bridge is made from round and square doll rods.

I made a jig to make each trestle. I laid the vertical legs in first Measured and cut each cross peace and then used a dremil to nutch each one as to glue each one across the uprights. I was trying to anchor them in a foam base but found that a peace of wood worked better. I measured and spaced each one where I wanted it to be on the board making a grid.

I drilled holes into the board where the legs would line up inserted the trestles in place. I put the hole thing on the layout where I wanted it and then adjusted each trestle so they where all level then I glued them in.

After they dried I Then cut and glued in all the horizontal joining peaces.

Now on to Barry:

I started this project the middle of January but I only work on it 2-3 days every 2-3 weeks and they live about 1-1/2 hours from my home.

I have about 110 hours into the total project so far and will probably require another 30 hours to finish the rest of the scenery and then I will send you a complete set of photos showing the development from beginning to end.

Thanks for the compliments. 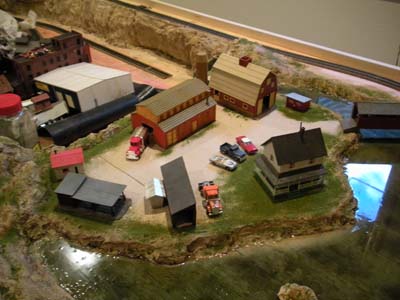 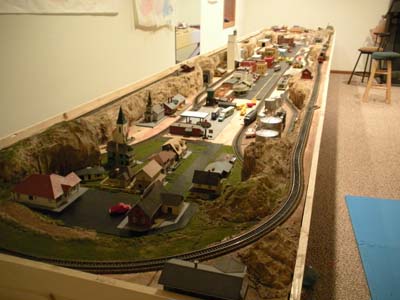 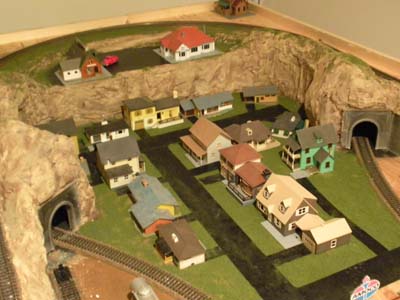 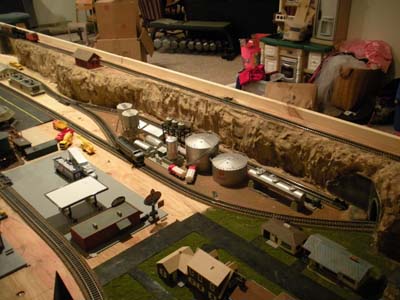 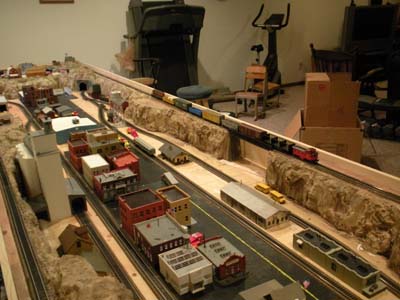 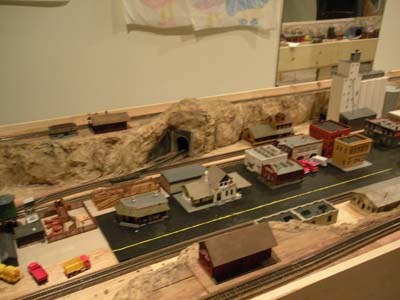 Please leave a comment below and let us know what you think.

A huge thanks to Barry and Frank for sharing.

And don’t forget the Beginner’s Guide is here.