Fred’s been in touch with this stunning N scale layout:

This is an update on my project. You first heard from me about a year ago, with my soliloquy about the importance of scale. So about a year later, here I am again with my progress report.

My layout (N Scale) is about 24 feet by three feet, with a “dogbone” right angle section at one end for track return under a mountain.

At the other end there is about eight to ten feet jutting inward (away from the viewing front, which forms a harbor, that accomodates a chemical tanker piered for loading at a refinery.

The other side of the harbor will have a city, with 1920 era apartment buildings sweeping up to modern 30-40 story high rise construction. Downtown section of city measures about four feet wide, and two feet deep. Tracks underneath eventually terminate into staging yard (in next room of my basement, which up ’til now has housed all my good wine and scotch.) Years ago I was an architect, so I’m looking forward to building the high rise section.

The layout has a curvilinear front face, with masonite facia, so that the layout varies in width from eighteen inches to forty two, which makes it look more natural, I think.

I have two rows of fluorescent tubes behind the top facia, together with high intensity incandescent mini-spots. It is very well lit, which helps these old cataracts see what the owner is doing!

The entire length of the layout resides underneath a diorama backdrop that curves all the way up and over the layout (layout is 4 feet off floor, “sky” of diorama is at 7 feet, which I built of “Masonite,” and taped and plastered with drywall mud for mural painting.

I used to landscape paint in my youth, and felt I had a better chance of designing the backdrop to my layout rather than a photo backdrop, which might have dragged the cart before the horse. I have been working pretty exclusively on the north (dogbone) end of the layout since I laid all the track a year ago, on a fictional rural town that looks a lot like my native New England.

“Maxwell Falls” (Grandson #1 is named Max) is the name of this town. It’s commercial, with brick shops from DPM kits, where the big effort seems to be in the painting and weathering, lighting, detailing, etc. I found a Volmer church kit, and kitbashed it considerably to use the right hand wall of the nave to extend the visible side on the left and give it correct proportions and scale.

Landscape is plaster cloth on foam insulation. I used many latex molds to model rocks from hydrocal and plaster of paris. Water in the river and the ravine that holds the hydro plant is by “Magic Water,” and though I leaked about half into buckets during the pour, looks very real once done. painting the rapids was a real challenge. I have audio chips all over the place, and a speaker inside the power plant rushes with water through the turbines as I continue with this fabulous hobby. 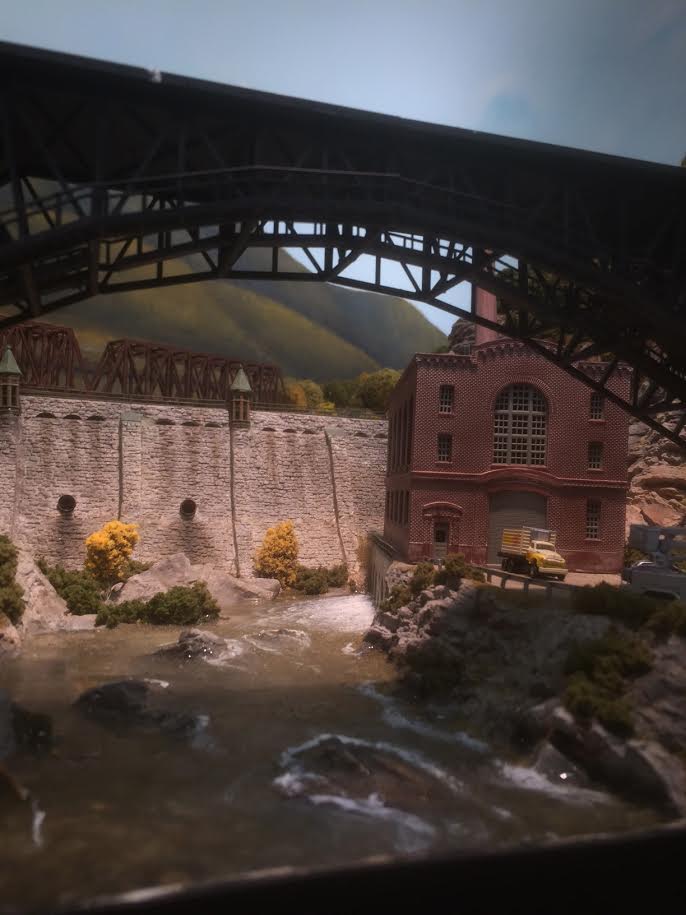 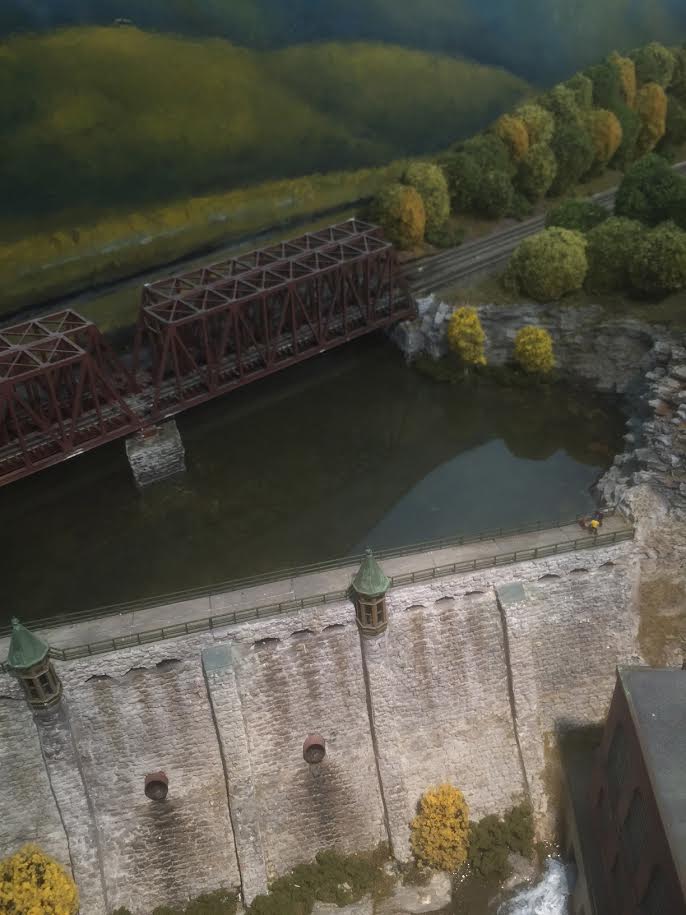 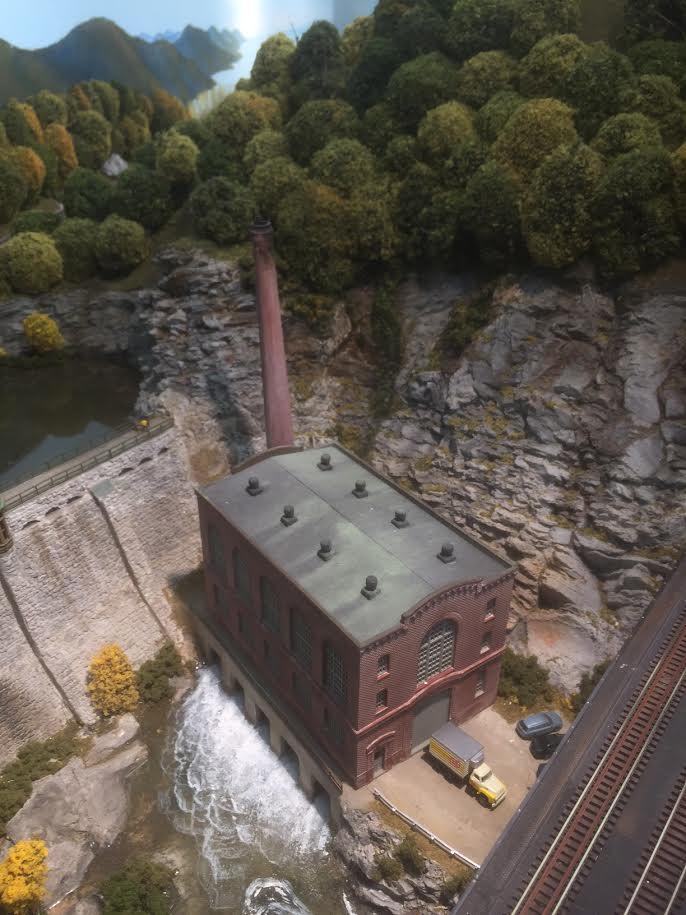 The bend at Maxwell Falls: (Note the “interface” between the plaster model road, and the painted road in the backdrop. I put the bridge expansion joint right at the break, and continued with the same color acrylic paint throughout. The painted road begins right at the red van on the bridge. 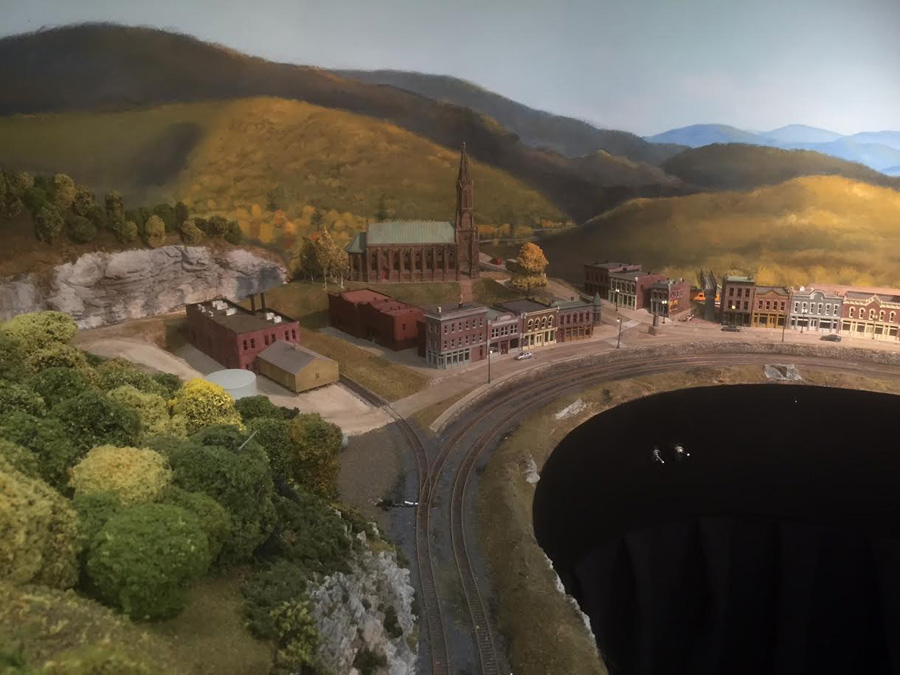 A Magic Water pond with sheep 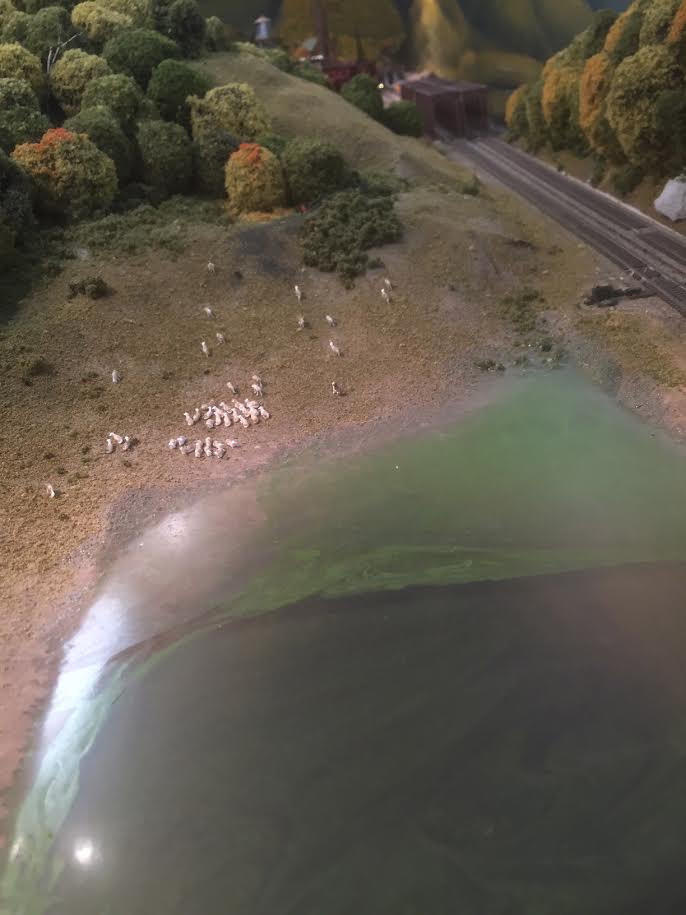 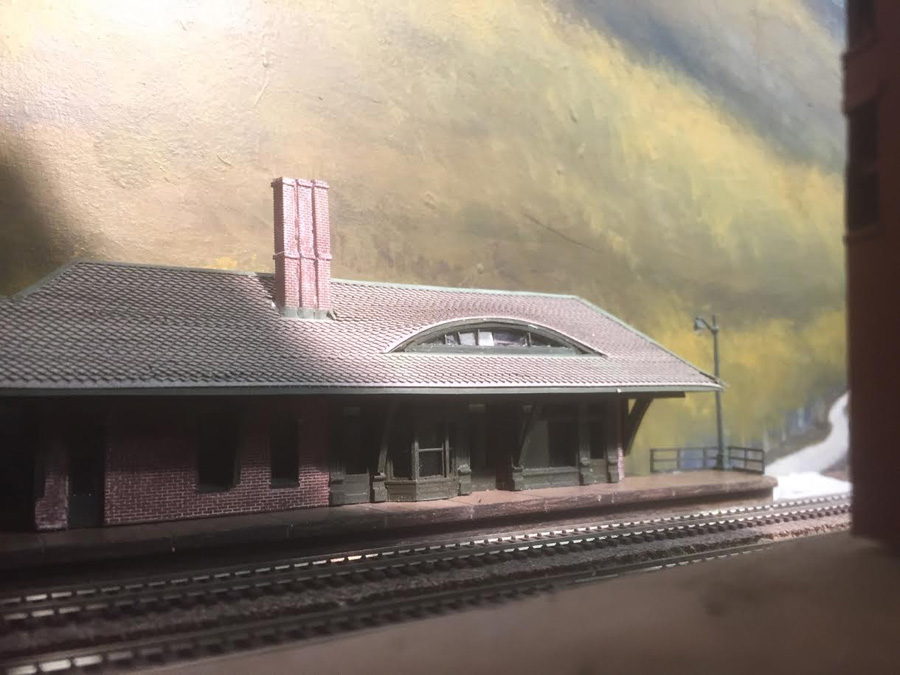 On the way from Maxwell Falls to “Port Charles” (The city) 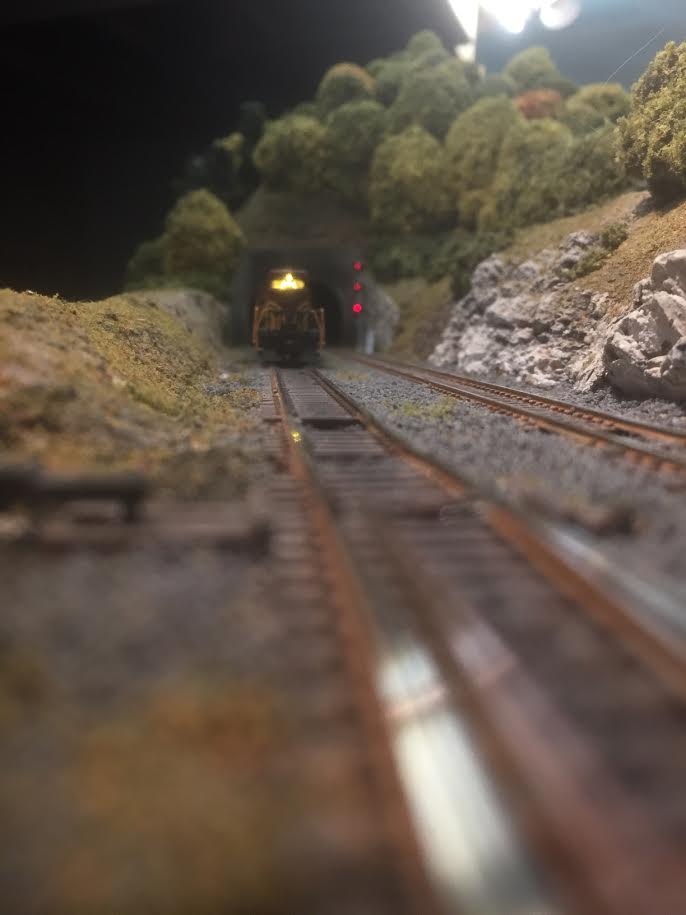 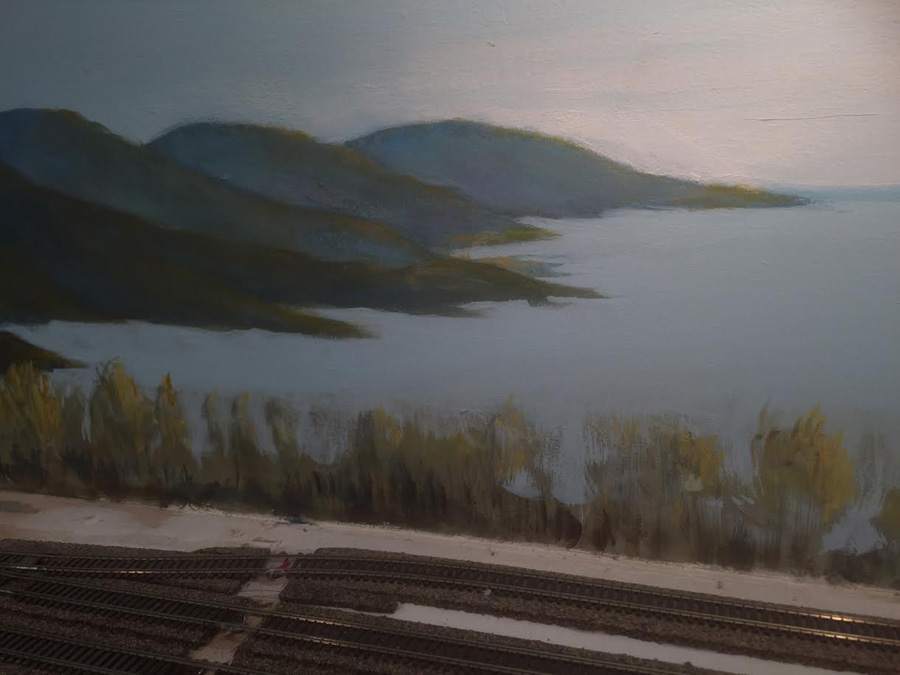 I’ll send you more in time, but here are some pics: (If I run out of digital room with these pics, I’ll just send them with labels in a separate email)

A huge thank you to Fred for sharing his stunning N scale.

(Here’s a load more N scale layouts if you’re after them.)

Just goes to show how much fun you can have with a theme to bring your layout to life.

Fred’s layout reminded me of John’s viaduct. It’s not hard to see how:

I know John moves them about quite a bit, so here are some stills (pics are clickable): 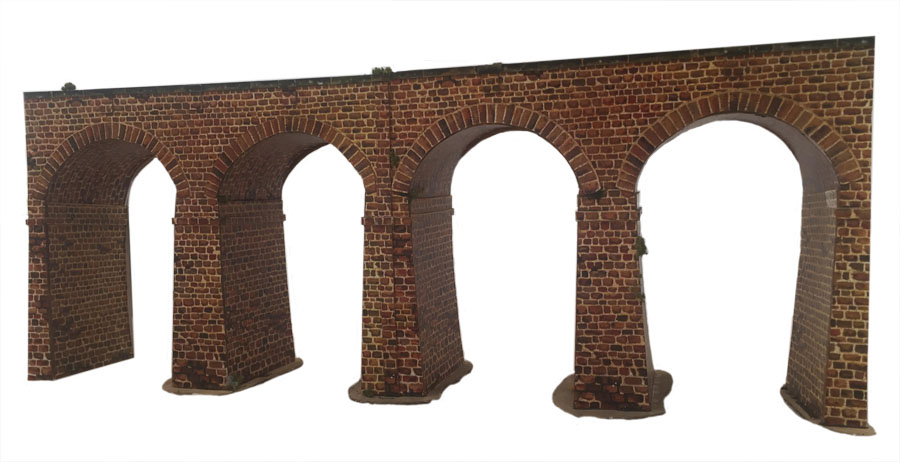 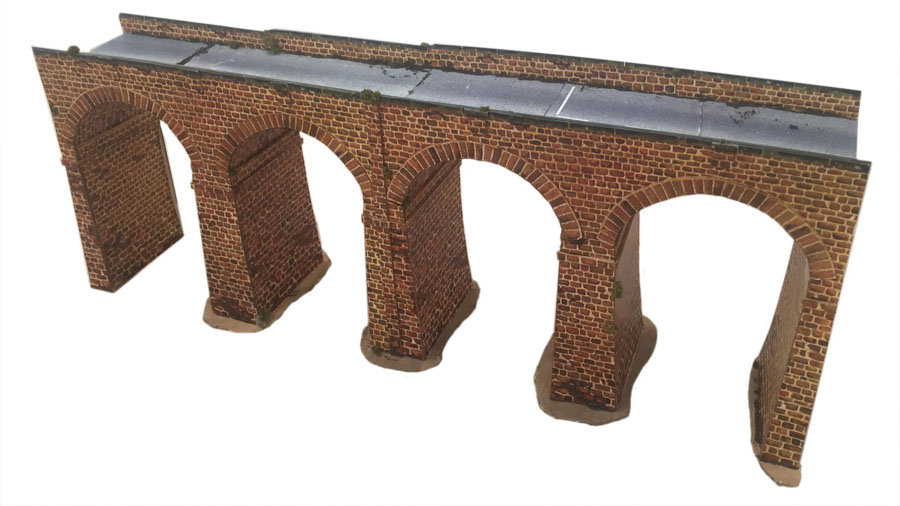 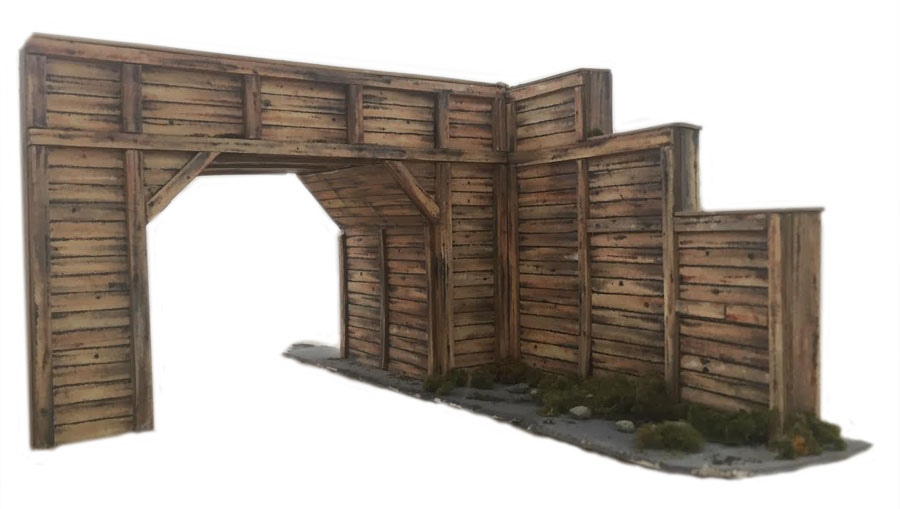 It’s hard to believe they are made from print outs, and they’ve just been stuck together – but that’s exactly what they are: 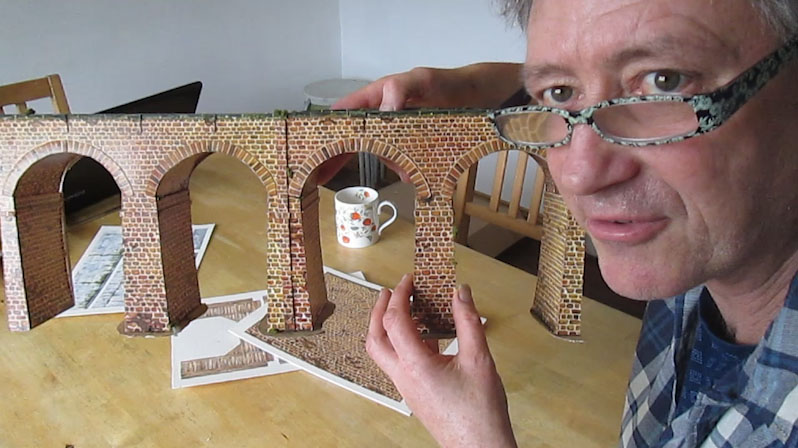 But best of all, all the new scenery is launched at a silly price.

The viaduct and the wooden tunnel are already on the store for $9.97 each – but guess what?

Right now, you can grab both – that’s the viaduct and the wooden tunnel, for just $9.98. So that’s that’s less than $5 bucks each.

Just so we’re all clear, this is only for a day or so though, then they’ll just be available in the store.

They are made at HO scale – just reduce the print by 50% for a stunning N scale size. If you want to print for O scale they enlarge really well – but you need a printer that can handle the larger sizes.

To grab your viaduct and wooden tunnel, click here, or justclick on the link below.

Please do send me pics of your models – and please leave a comment below, I’d love to know your thoughts on them.

That’s all this time folks – don’t forget the Beginner’s Guide if you’re getting borded of sitting in your armchair (and it doesn’t matter how many decades you’ve been sat in it, it’ll really help you to get going).

That’s all this time folks. Stunning N scales and viaducts.