I’ve only been reading your blog for a week now, but have enjoyed it immensely.

As a relative newcomer to railroad modeling I can’t offer any “how to” tips, because I haven’t really had the experience for years (I’m 70 now – last electric train I had was the Lionel “standard Gauge” monster I inherited from my dad!)

For years I was an RC aircraft modeler, but eventually got worn down by the violent destruction of years of work from control mishaps or a lost radio signal!

So I approach railroad modeling in my dotage with the hope of less heartache from my creations. As a newcomer I can still give you my recent impressions about this wonderful hobby, nonetheless.

As a professional architectural modeler of the 1970s and 1980s, the most important thing to me (then and now) was the issue of scale, and all of us designing buildings developed a pretty good eye for something that was out of whack in our models.

Whether or not people understand their sensitivity to scale, most viewers have it. And I would guess that all RR modelers share a real sense of it.

After all, for many modelers that’s really the whole goal, isn’t it – to achieve success with the illusion that you have created a miniature world (or a piece of a miniature world) that evokes the real thing.

And few issues are as important as scale. Texture of materials has scale. Color has scale – look down at a “real life layout” some time from an airplane and notice how the colors fade as a function of their distance from the eye, even without apparent help from air pollution.

Movement has scale – a flashing light on a police car is not the same as a flashing anti-collision light on a power plant stack. One flashes rapidly, the other in a lazier “on/off” sequence, since the larger bulb filament takes its time to completely go dark. (The current day electronics for reproducing scale lighting effects are really remarkable.) But one careless decision on track ballast can undo all the well executed aspects of your model so far.

Developers often use scale phenomena deceptively to make a building site look larger and more commodious than it really is – simply by changing the size of a piece of architectural vocabulary that offers some fundamental insight into scale – the size of the bricks or concrete block in a drawing, for instance.

When I built models I always spent a lot of time fashioning scale human figures on my foam cutter. I made sure that their heads and hands were the correct size. Although I sometimes used them in the final presentation model, where they helped me was in their placement within various portions of my designs – Is there adequate room in the lobby of a building? Does it feel cramped? Or does it feel cavernous? At the end of the day the human figure was the perfect yardstick, not only for my model, but for my design behind the model.

I would suggest that scale figures can help in RR Modeling as well……not necessarily as end participants in the layout as much as a visual aid during the decision making process. An aid at choosing and building structures, spotting an offending detail from kits (I find that ladders and railings are a real problem in N Scale, and have already started pitching what came with my kits for a wire brass and solder solution on my part.

My tip is this: spend as much time as you can fashioning a couple of human figures at 1:160 scale (for N scalers) and then use them as you model. Use them to design your refineries, your feed lots, your Victorian neighborhoods. It will really help you envision your miniature world!

Alluding to I think of length of passenger train.

I know this is out of character for this blog but I must share in defense of Dangerous Dave.

In summer 1967 I took my first train ride from Missoula Montana to St Louis Missouri (sort of).

While coming into the Twin Cities (Minneapolis / St Paul) I was hearing rumblings of an engineers strike. (Guess it would be the first one in the nation ever) I had no idea what that meant, being 20 years old. Heard lots of rumors. Wondering.

Got into the TC Train yard. Lots of trains sitting. Going no where. As was ours. Sitting. Several Hours.

After about 4-6 hours we started moving. Guess they were short of manpower (due to strike) so they connected us to another 2 other Passenger trains. Finally we left for Chicago.

I think the train was now about 25-30 cars long. Sometimes traveling along the Mississippi through Wisconsin
we could see our train from our train several times through the curves. We stopped at each station along the way about 3 times.

Slow Going. But finally made it — to — Chicago!

The Chicago station was — strange — deserted — hardly Anyone there. Empty. Was told the train was not going anywhere. This was it! You are on your Own. 1600 miles from home. Still not at my destination. I got the final taxi out of Union. My first taxi ride. Went to the airport. Got a plane ticket to St Louis. My first airplane ride.
Funny thing is – I do not recall my return trip 3 weeks later! It must have been boring!

So long passenger trains may not be the norm – but has occurred at least once!


A big thanks to Fred and Elbert (I think Dave was just playing around with his pulling power video).

And now on to something that I hope you’ll all find very helpful.

Some time ago, my boy wonder made some engine sheds. A lot of folk asked how they looked so ‘3d’ when they are just print outs.

Fortunately, my good friend John has come to the rescue. He’s made a very detailed ‘how to’ video on the engine sheds. He’s a genius when it comes to doing stuff like this. 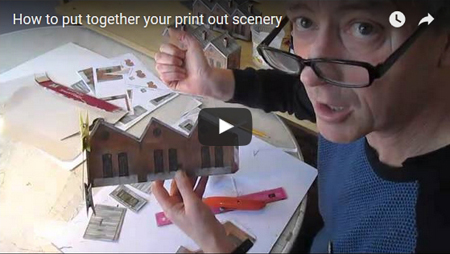 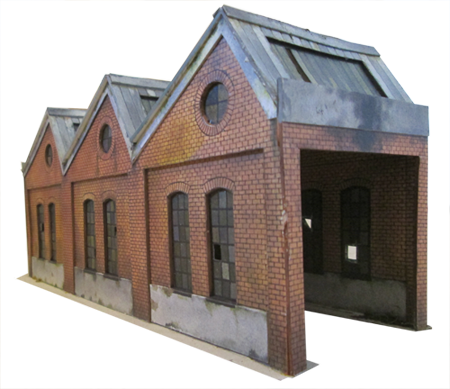 You can see his tutorial here.

It’s very satisfying to see all the print out scenery appear in your layouts. Please do let me know your comments and thoughts on them below.

I think the latest shed is fantastic – I’ll get it on the site shortly. If you want to bag the launch deal (just $5!), it’s here.

That’s all this time folks. Please do keep ’em coming. And if you want to roll your sleeves up and get started, the Beginer’s Guide is here.