Gary’s been in touch with quite a HO track layout project:

Here is the narrative of my HO layout (Mt. Thornton National Railway Park).

Thanks for all you do. I hope you find this project worthy of publication.

That’s when I decided that it was time to resurrect my old HO equipment from over 40 years ago and thus the journey began. Since I live in a patio home with very little extra space, finding an appropriate location was a major challenge.

The only option seemed to be my two-car garage that was already occupied by a workbench and potting bench down one side and large storage shelves down the other side with just enough space for the car to fill the center. 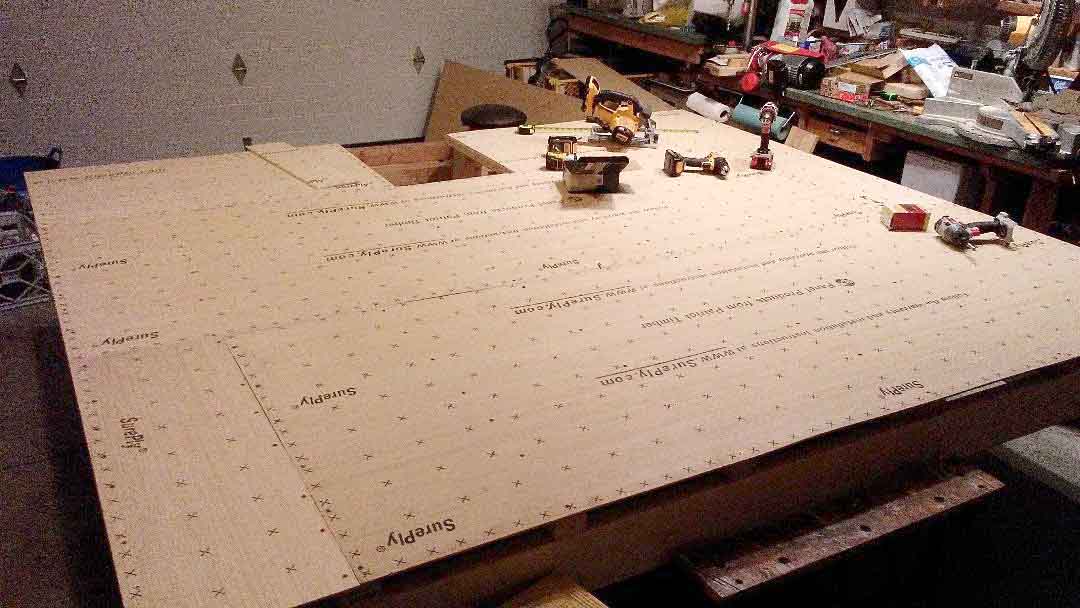 The solution was to build an 8′ by 10′ table with a notch to go around the garage door opener when the layout was hoisted to the ceiling, allowing the car to fit underneath. 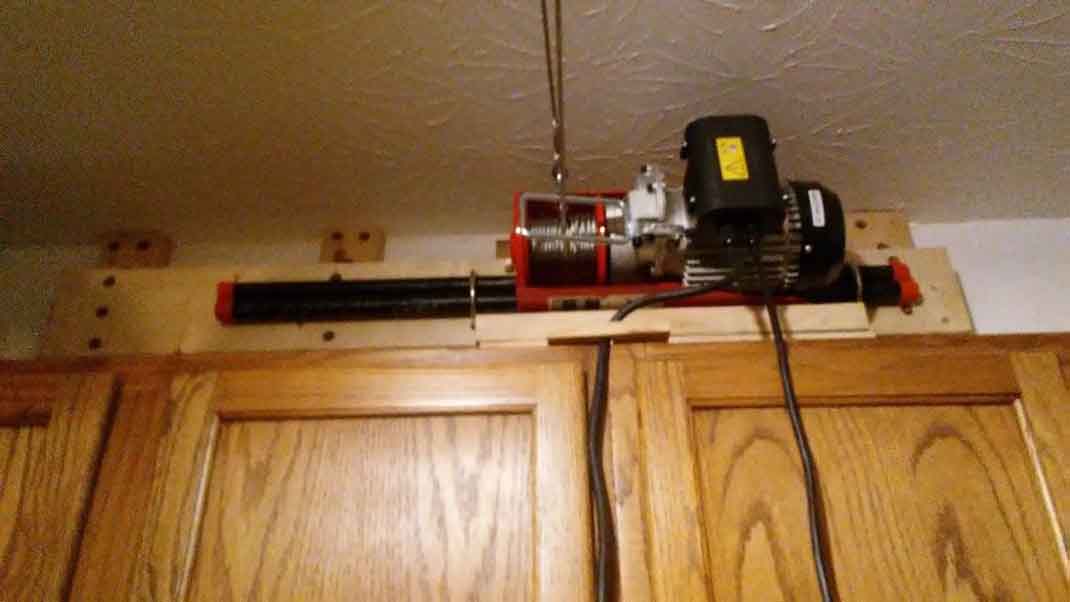 So with a power winch, pulleys and some cables the idea seemed feasible (to me but not my wife). Mounting the requisite 3 x 6 beams, the pulleys and especially the heavy winch proved to be a challenge for one person with no help, but it worked perfectly on the first practice lift attempt before track work and scenery were in place.

From there on, every attempt was made to keep everything as lightweight as possible other than the (2) 2×6’s and the (6) 2×3’s that formed the main support for the ¼” plywood base. Everything after that was Styrofoam, paper, plaster cloth, sawdust, eight gallons of light weight plaster, tracks and scenery.

I’m not sure which came first, the basic idea of the layout or my introduction to your blog, but the ideas and inspiration have proven invaluable. 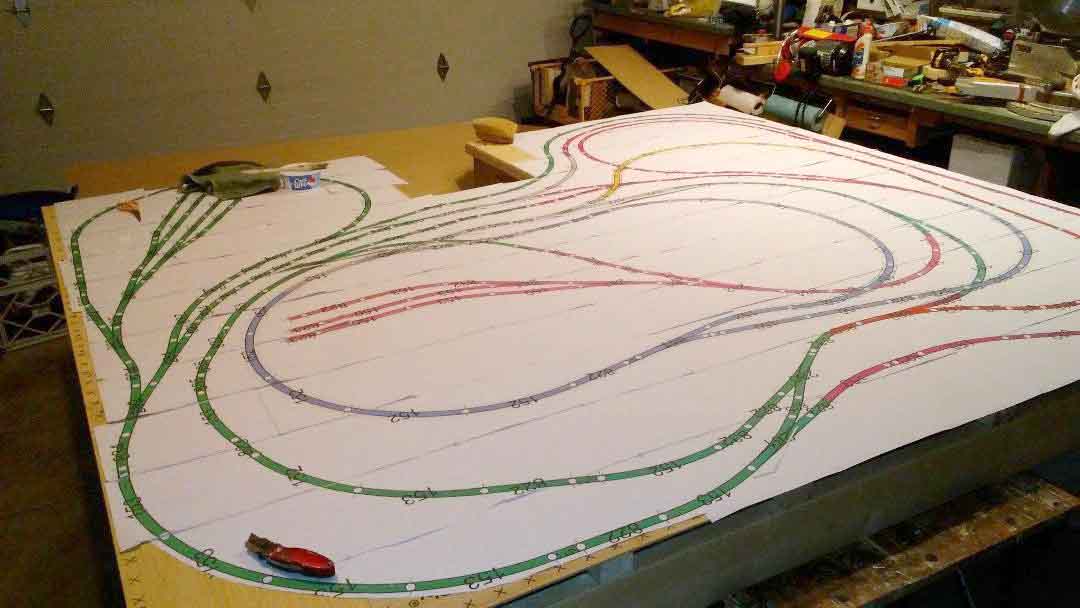 I started with AnyRail and did my computerized layout and then printed it out full scale (something in excess of 140 pages), which I mounted on my plywood base, but only gluing the track layout portions. 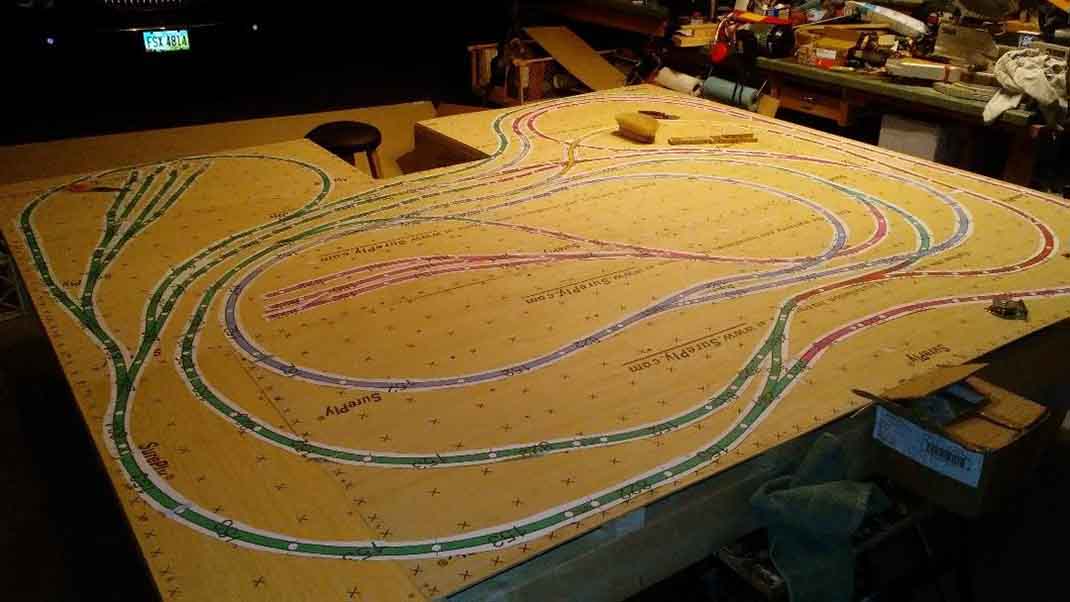 A scaled down printout later became my control panel. 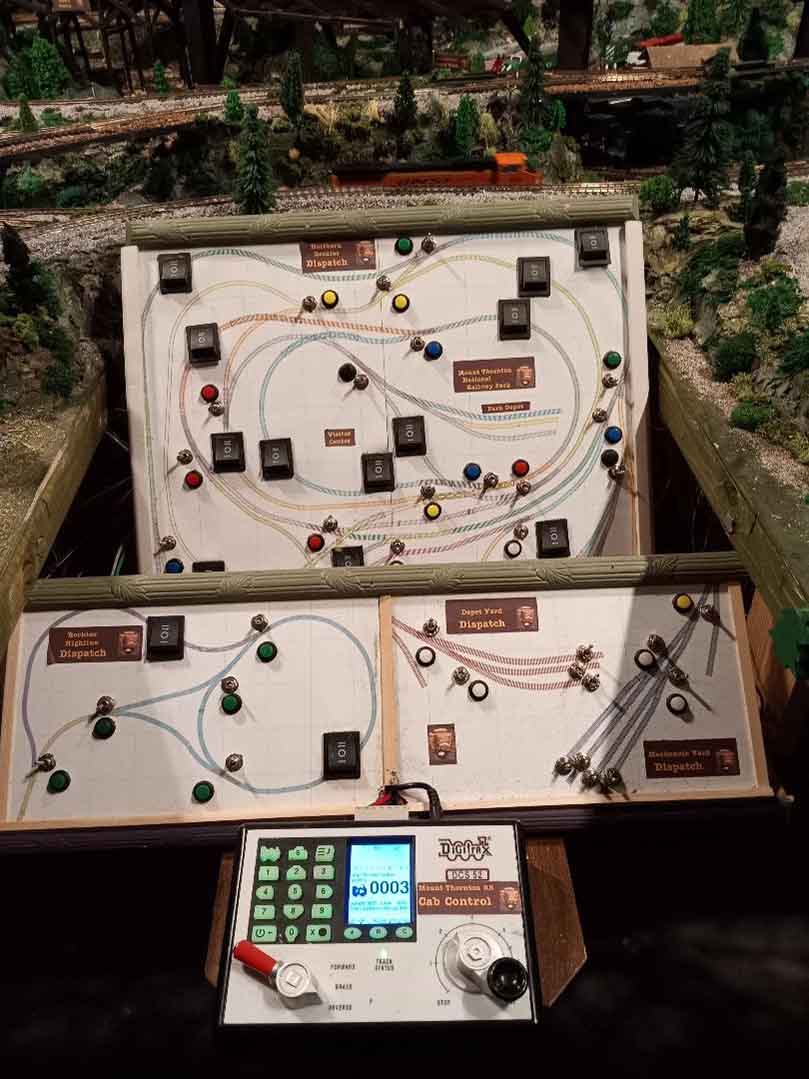 From there I cut away the non-track paper and it was ready for Styrofoam (track areas) and plaster cloth everywhere. A portion of the plywood was cut and lowered below grade to create the gorge. 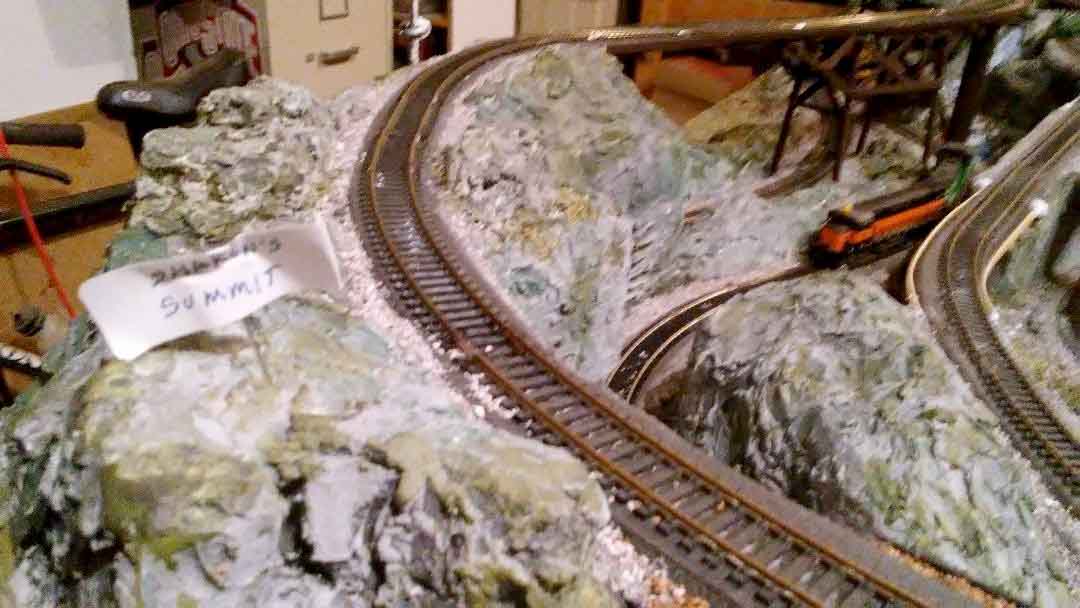 The next phase was to sculpt the hills, mountains, canyons and the gorge with the lightweight plaster. This was easily one of my favorite parts. 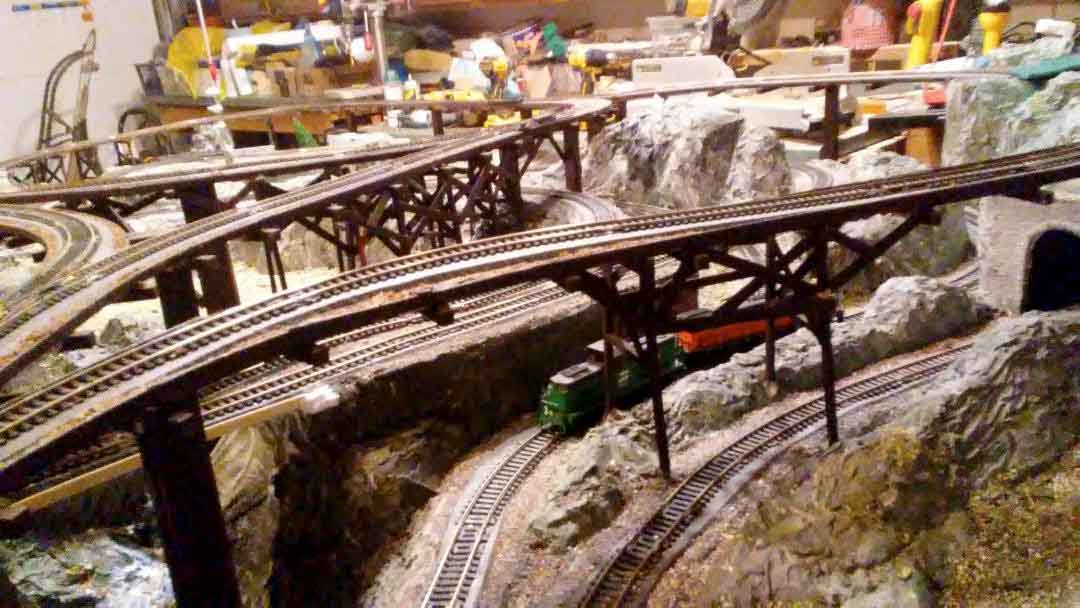 Next was the track bed and then the track which was all old Code 100 track in 9″ sections that needed to be cleaned, laid out in place, the rails soldered and then the drop wires soldered to the track. In all, over 200’ of track was installed. This was easily my least favorite part of the project.

The entire layout is wired as 4 master sections with 5 or 6 subsections within each. It is all DCC, however my control panel switches would allow me to run DC if I decided to add a few wires. There are 4 reverse loops that I have working fairly well with the automatic circuit boards.
A bonus to the capability of winching the table off the floor was the fact all the under table wiring could be done without crawling beneath the table – a real life saver. 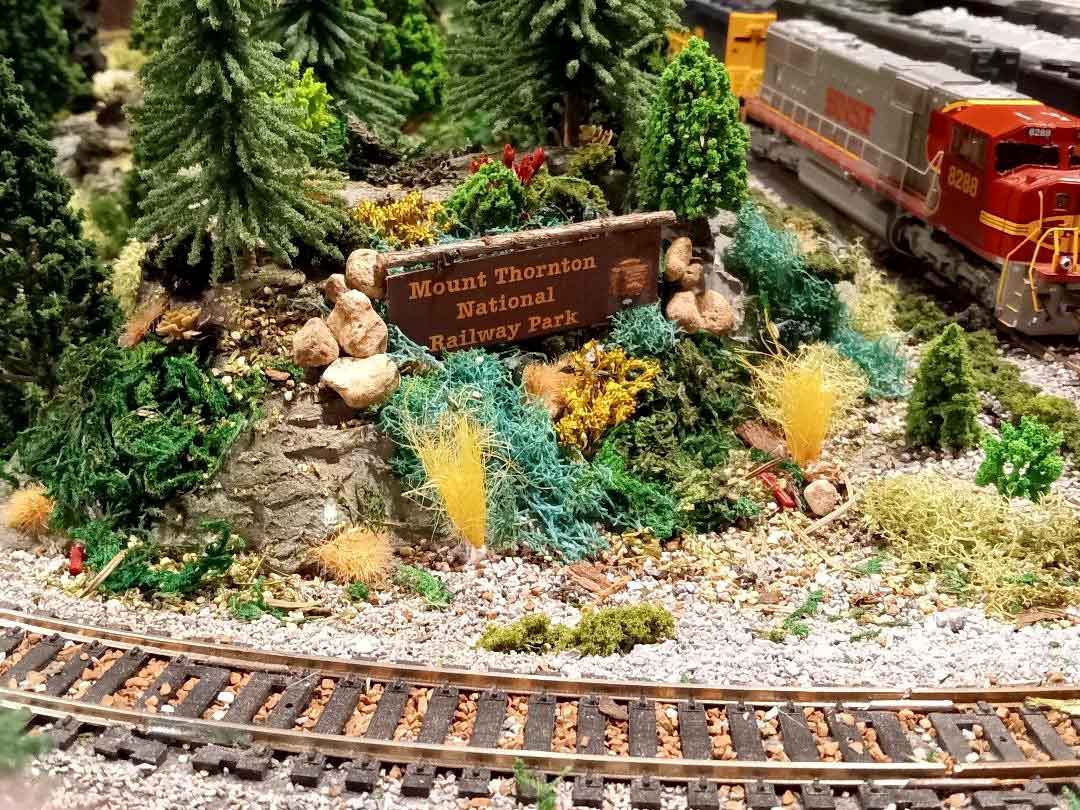 I noticed in most of your posts that a theme becomes very important to most modelers. I had not thought of that aspect, but eventually my theme has brought me the most joy. 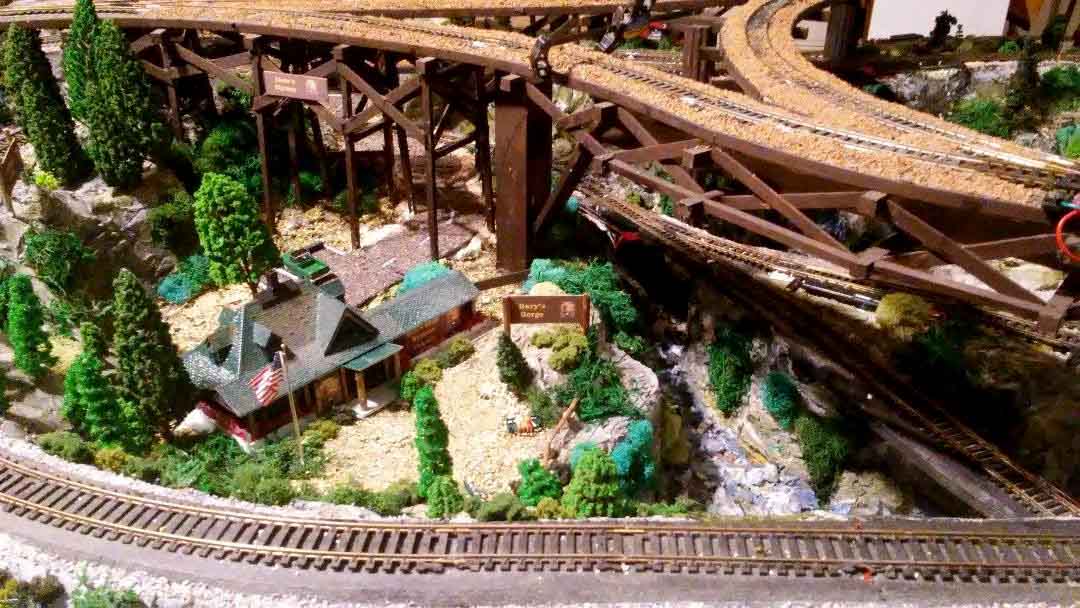 The idea started as a western US mountain layout with the requisite tunnels, and ended up as the Mount Thornton National Railway Park, complete with national park scenery, signage, vistas, park activities and even a visitor center. 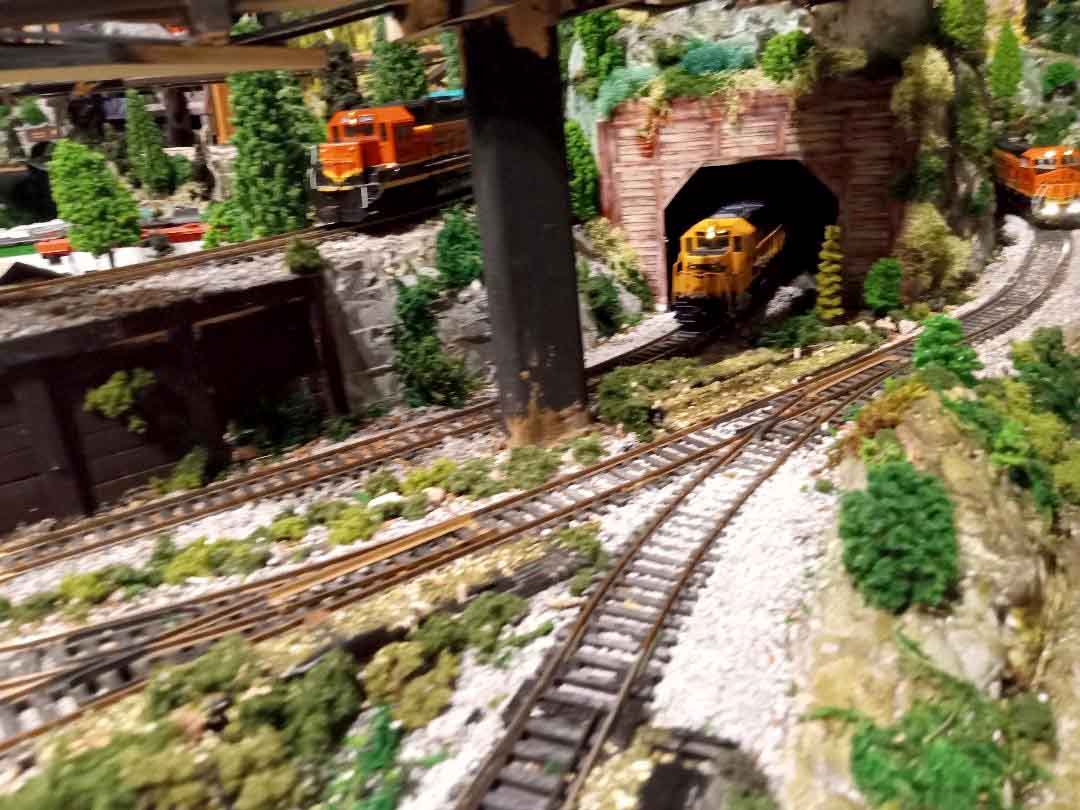 It also is based on BNSF routes through the Rockies and includes most of the legacy locomotives, especially Santa Fe, Burlington Northern, Northern Pacific and Great Northern along with the fictitious Mount Thornton & Gary’s Gorge RR.

Now the fun part of the theme, as all the “national park” features are created and identified with appropriate signage for all the members of my family: 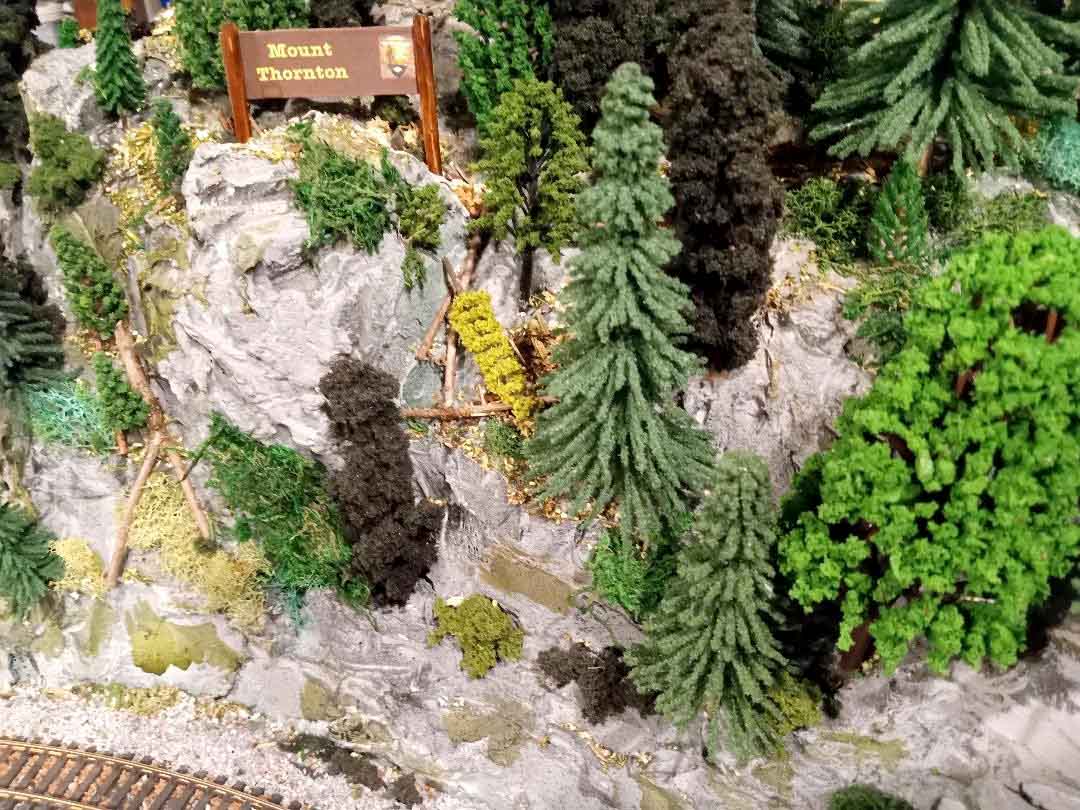 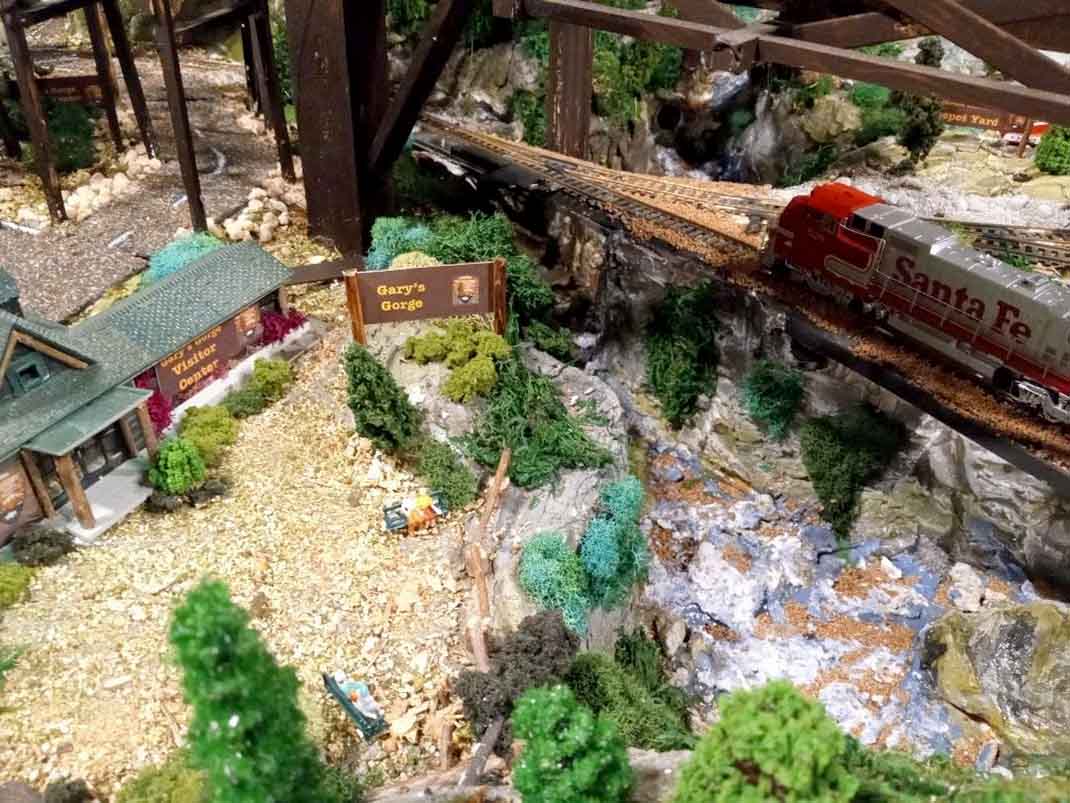 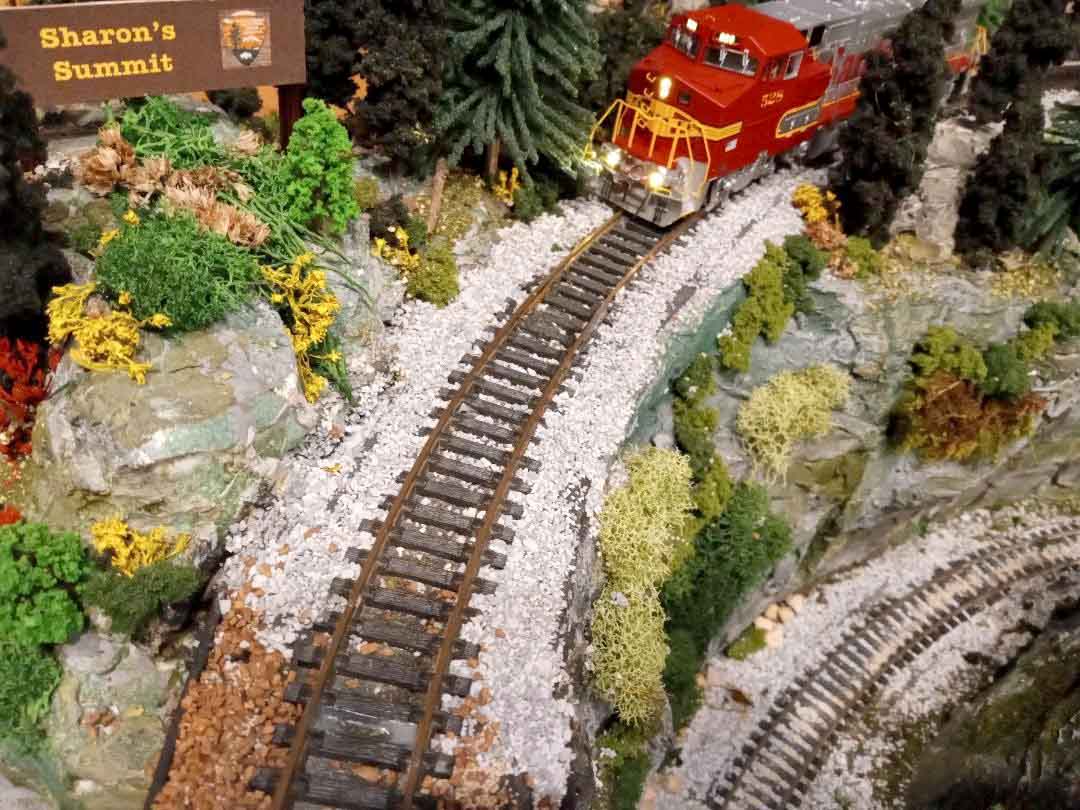 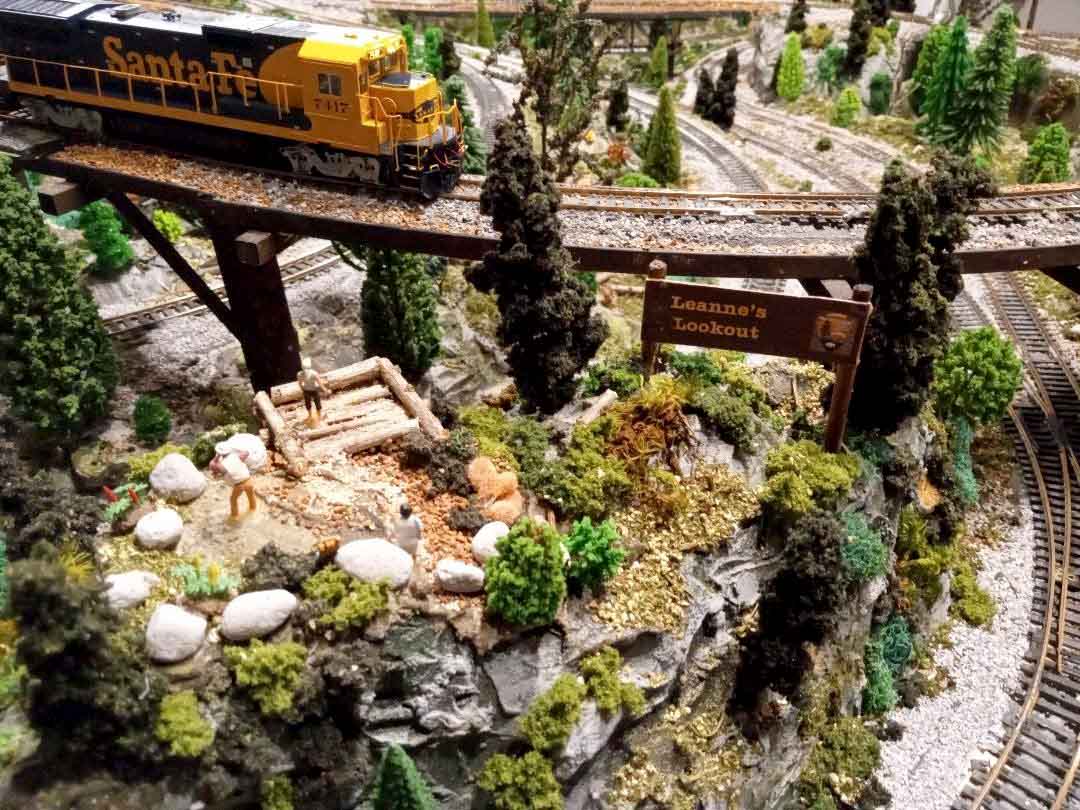 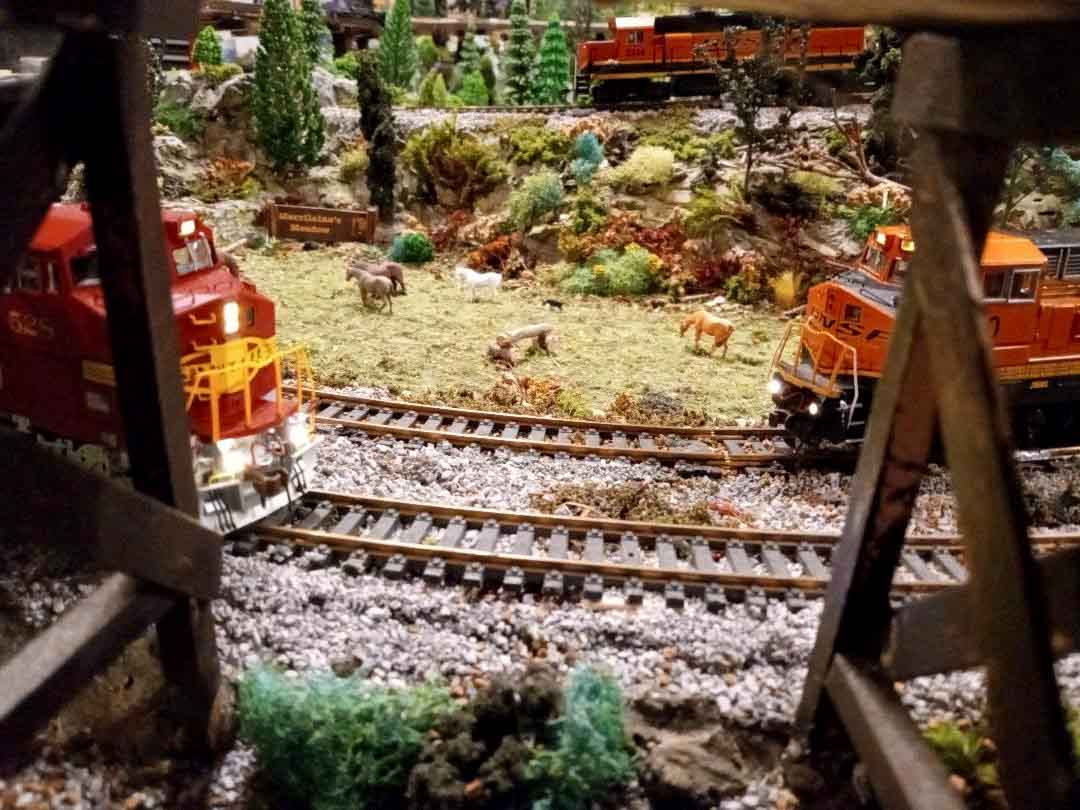 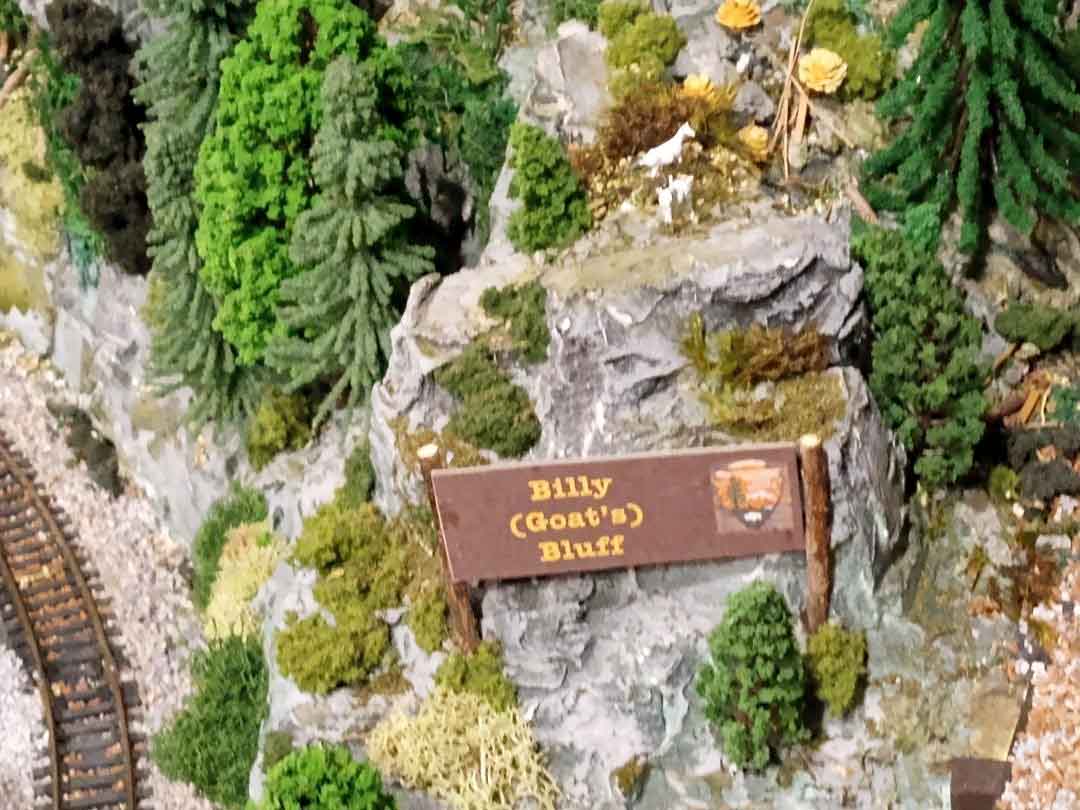 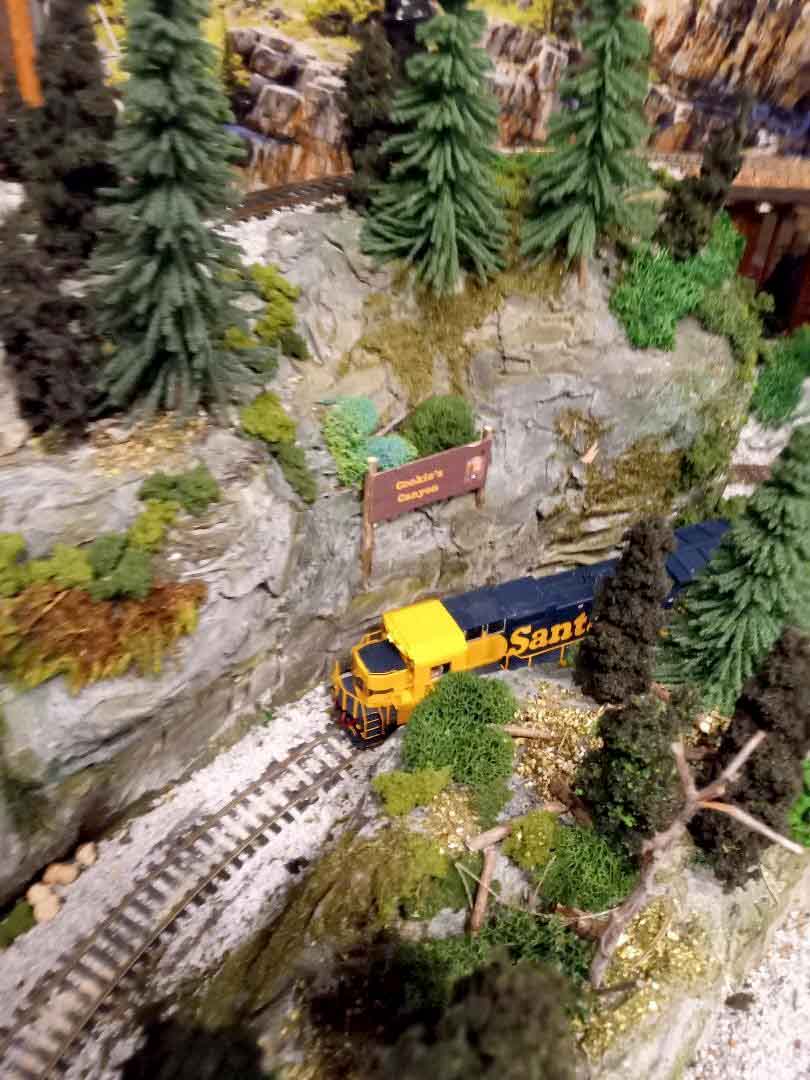 Cookie’s Canyon (sister) – deep canyon with track running through it 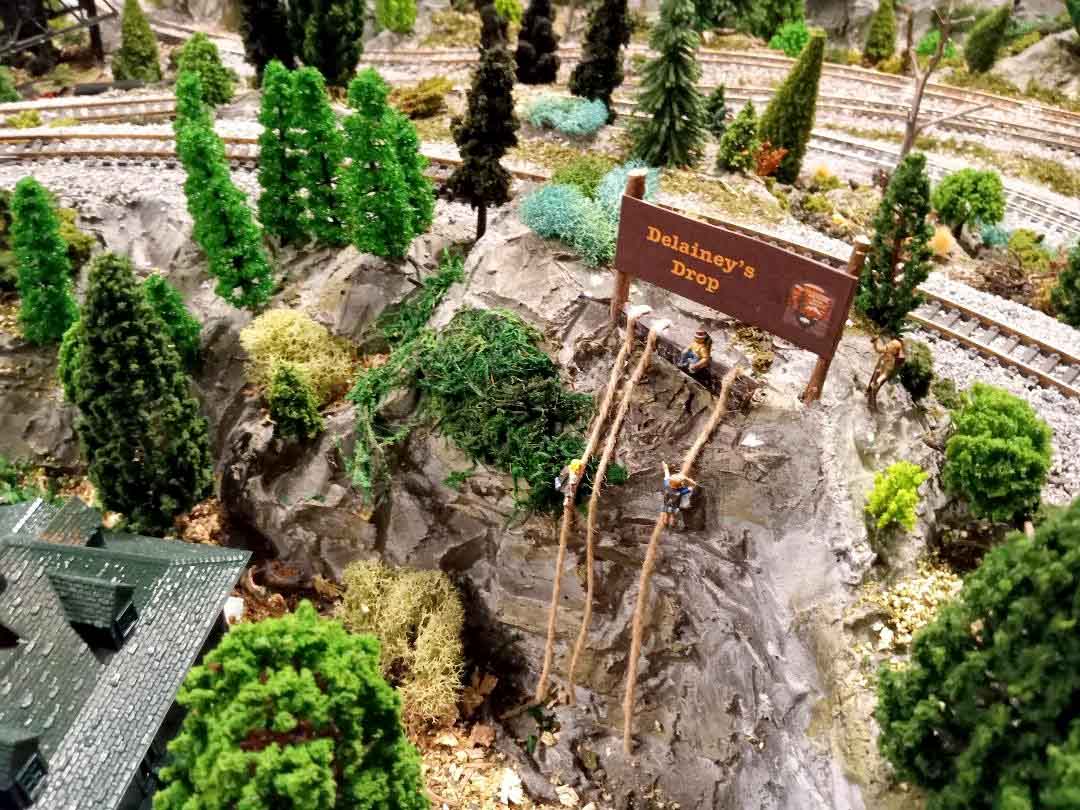 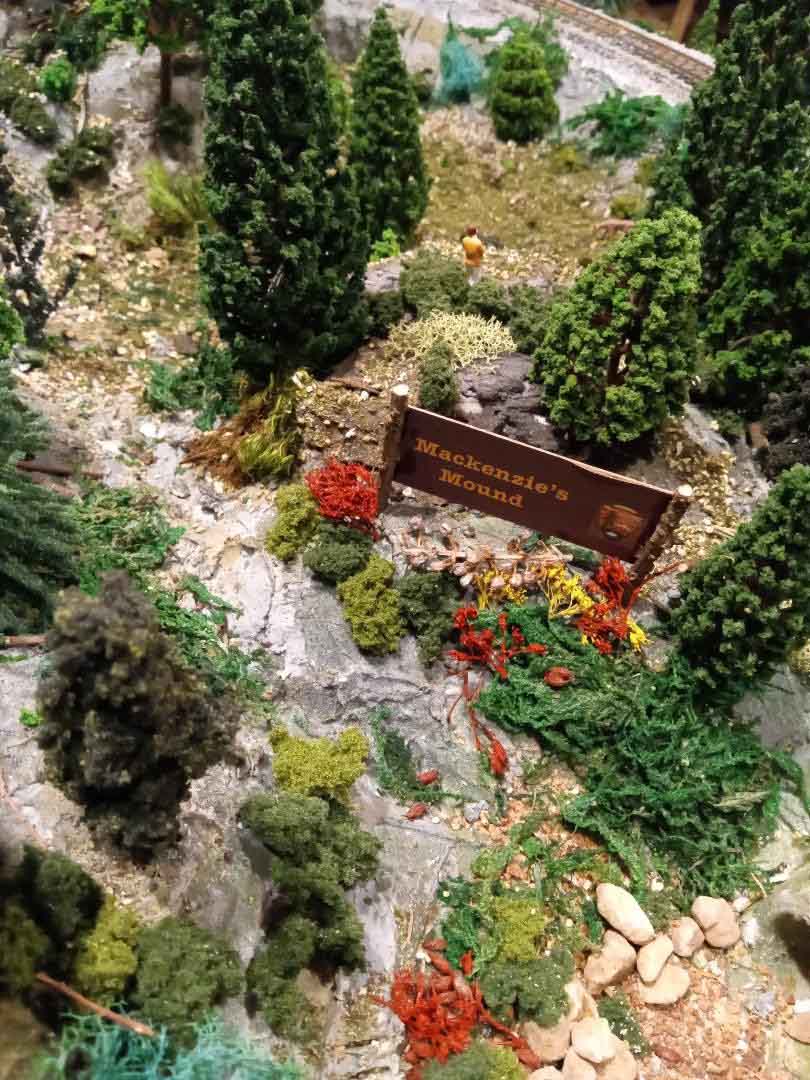 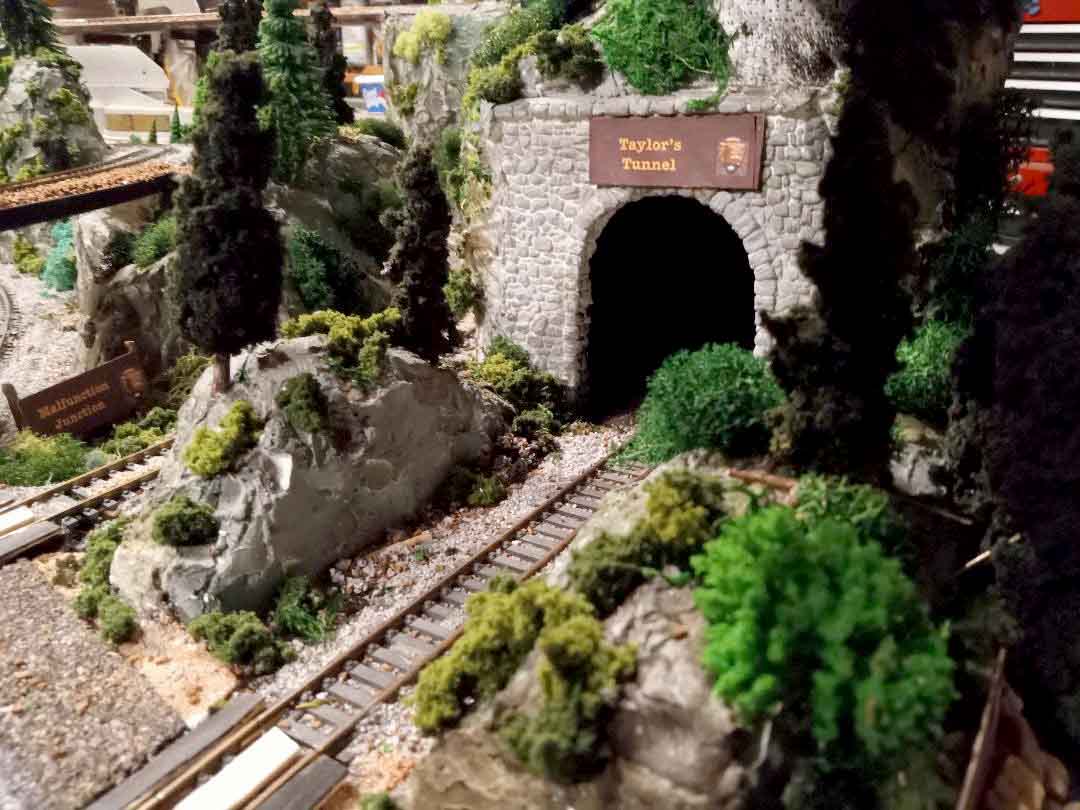 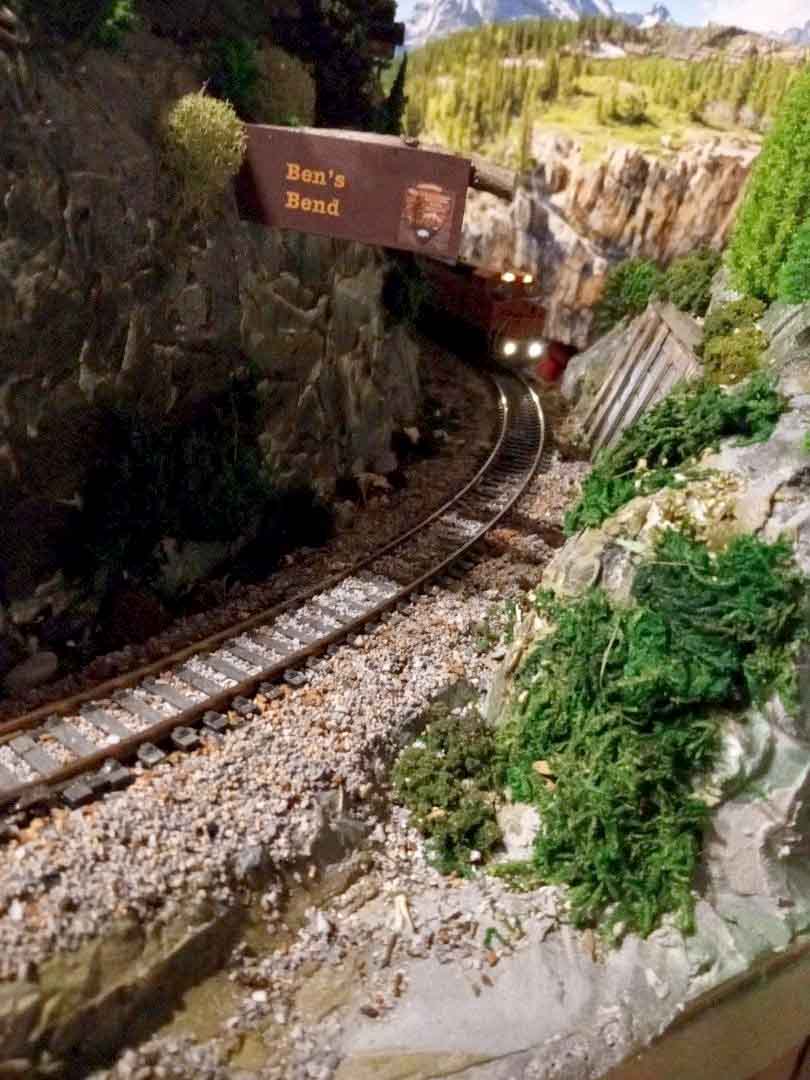 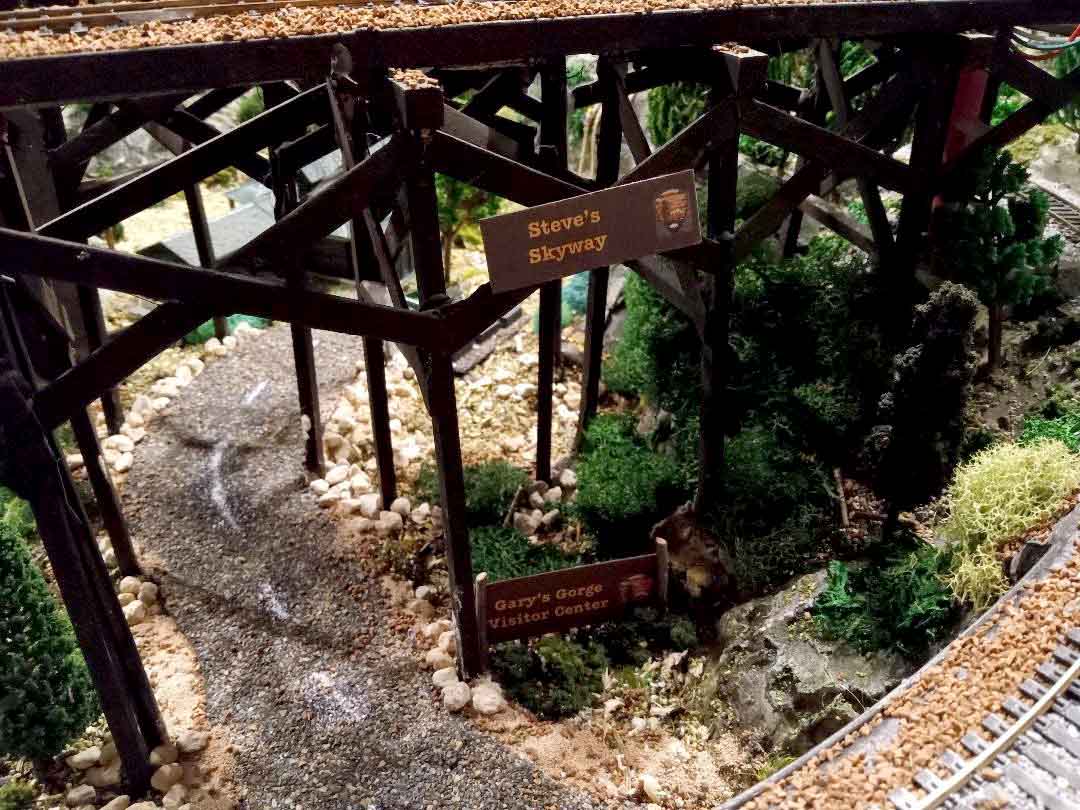 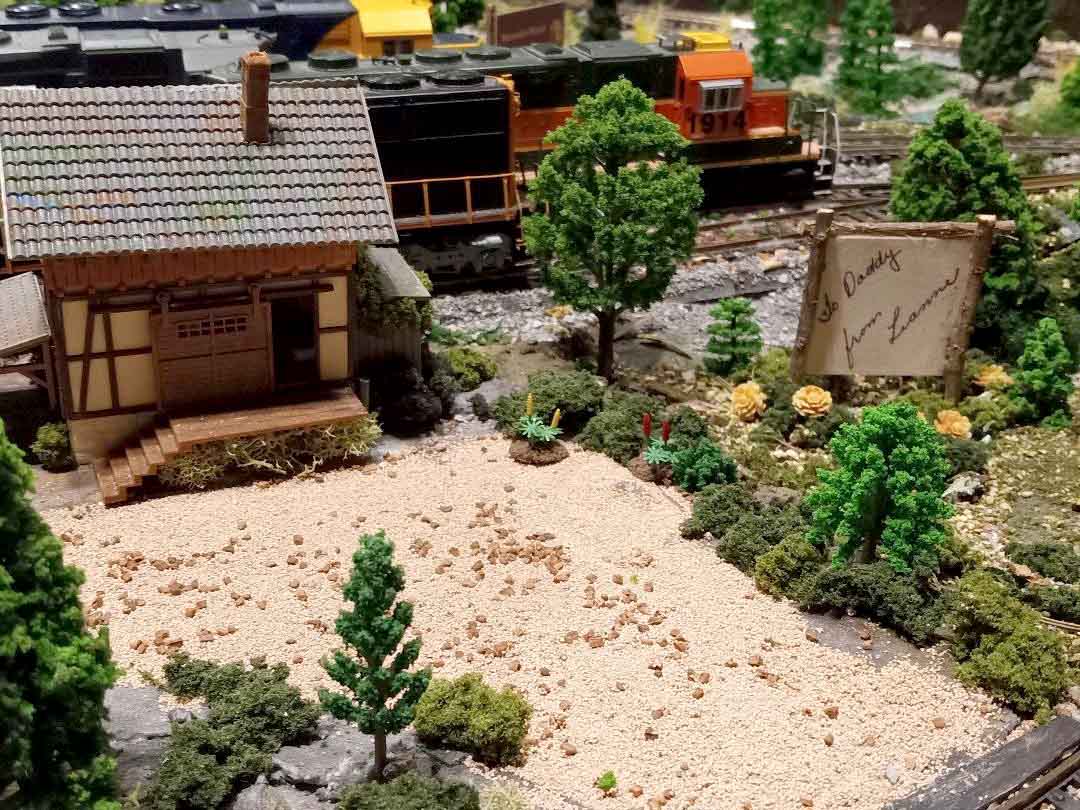 The freight depot is special in that I discovered it in my stored HO stuff and it was still in its original box and sealed plastic bag. What made it special was the tag in the box as it was a Christmas present that said “To Daddy from Leanne” – so that meant it was 40+ years old. It now has a permanent home on the layout, complete with its own “Christmas tag” billboard. 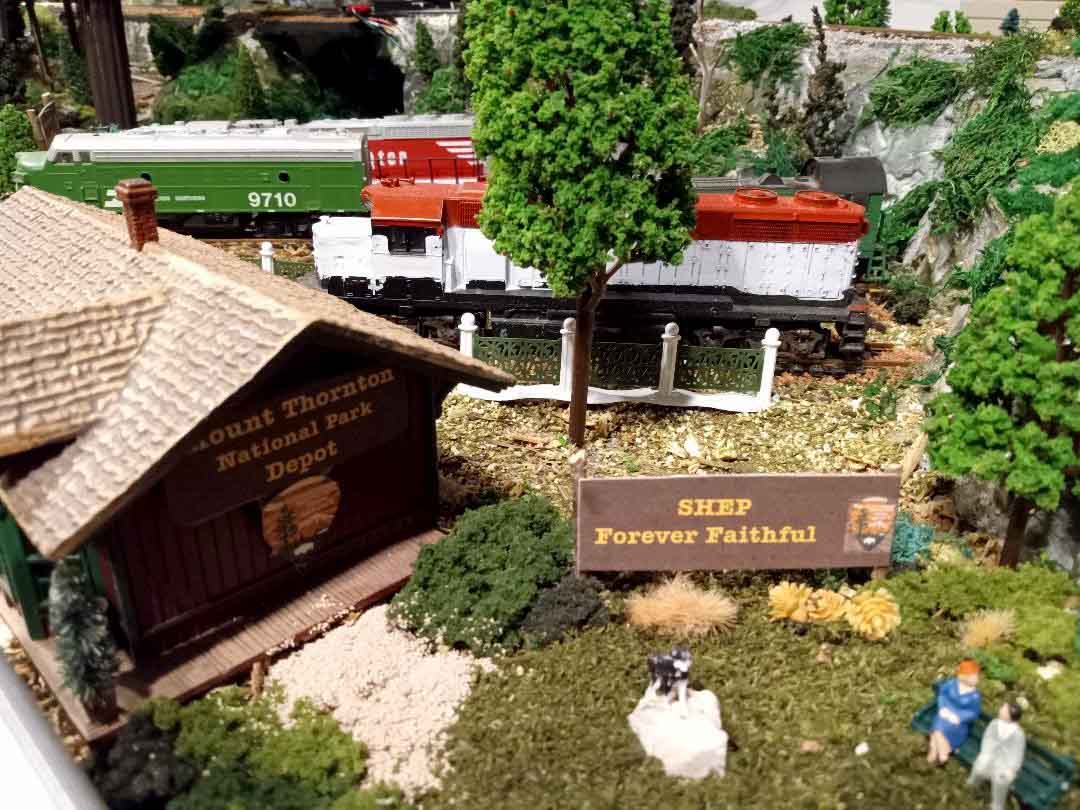 Then I came across a story of a special dog that has become part of the Great Northern RR lore and fit so magically into my national park theme that it became part of the small memorial park adjacent to the Thornton National Railway Park Depot and the Legacy Locomotive Museum.

As the story goes, Shep was a Montana working dog and maintained a vigil as his master was taken to the hospital. Unfortunately, his master passed away and his body was moved to the depot then onto a train for the trip back east.

Shep followed him to the depot but couldn’t board the train. So for the next 5 ½ years he lived under the depot platform and greeted the 4 passenger trains that came through every day, hoping for his master’s return.

Ironically Shep died as he was hit by a train as his hearing failed with old age. The memorial that was built in Fort Benton, Montana to honor Shep – “forever faithful” – is fittingly recreated as part of this national railway park. 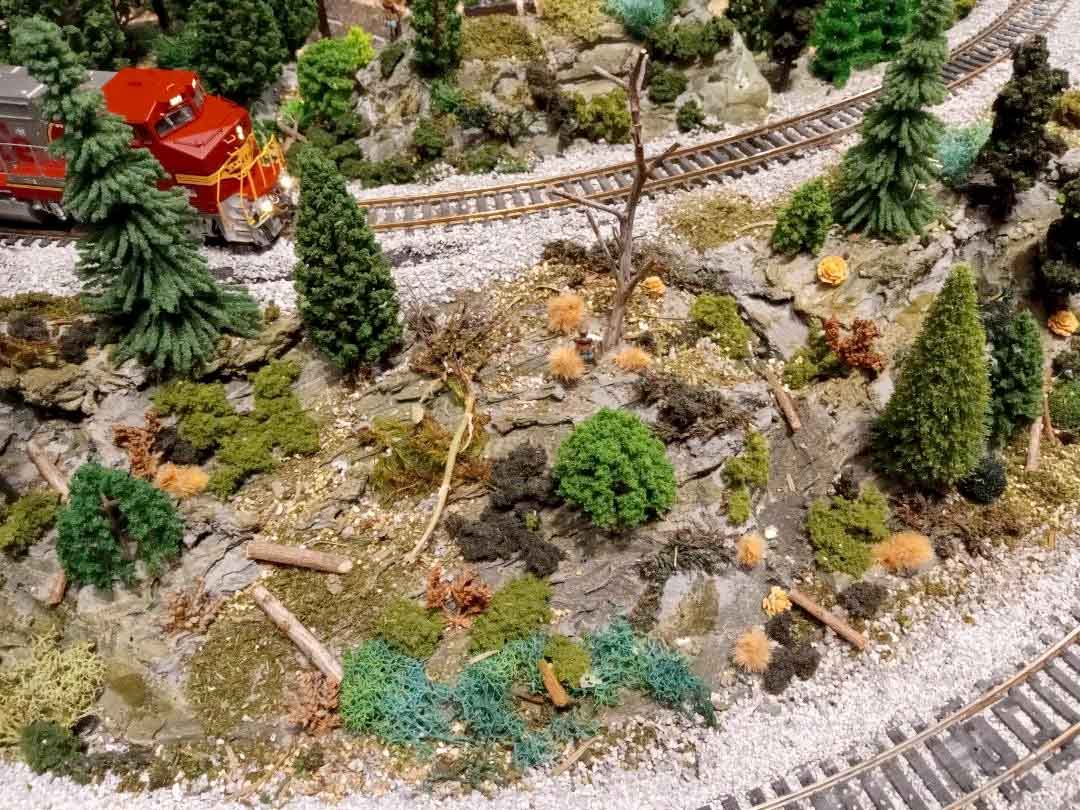 Painting, staining and application of grasses, shrubs and trees was my second favorite pastime as I spent many years as a landscape architect and contractor, so I was able to utilize those skills in miniature. I hope it shows! 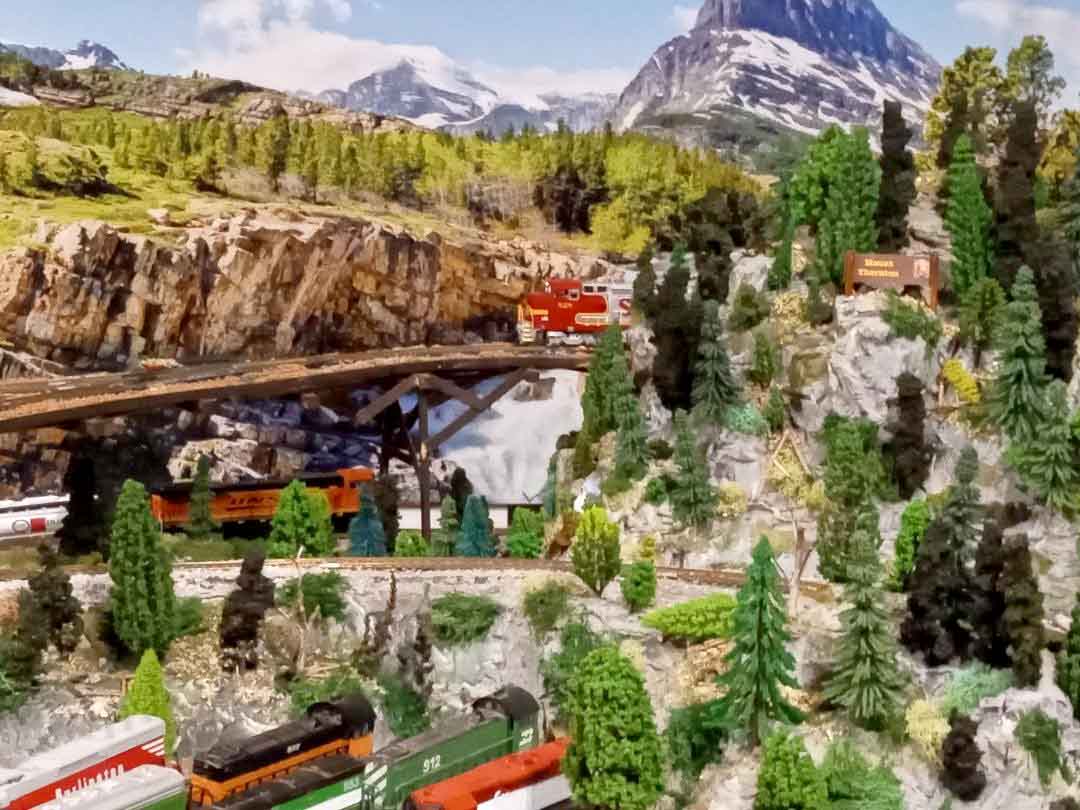 I had never thought of a background for my layout but your blog’s many examples convinced me I should try. Since my layout has access from all four sides, I decided to pick a main view and I found a perfect wide poster to pull off a great background.

Since it would be in the way of conventional garage activities, I mounted it with rope pulleys to raise it out of the way when not railroading. The 90” x 30” poster is an actual photo from Glacier National Park and has the mountains and the start of the gorge that fits perfectly with my layout. 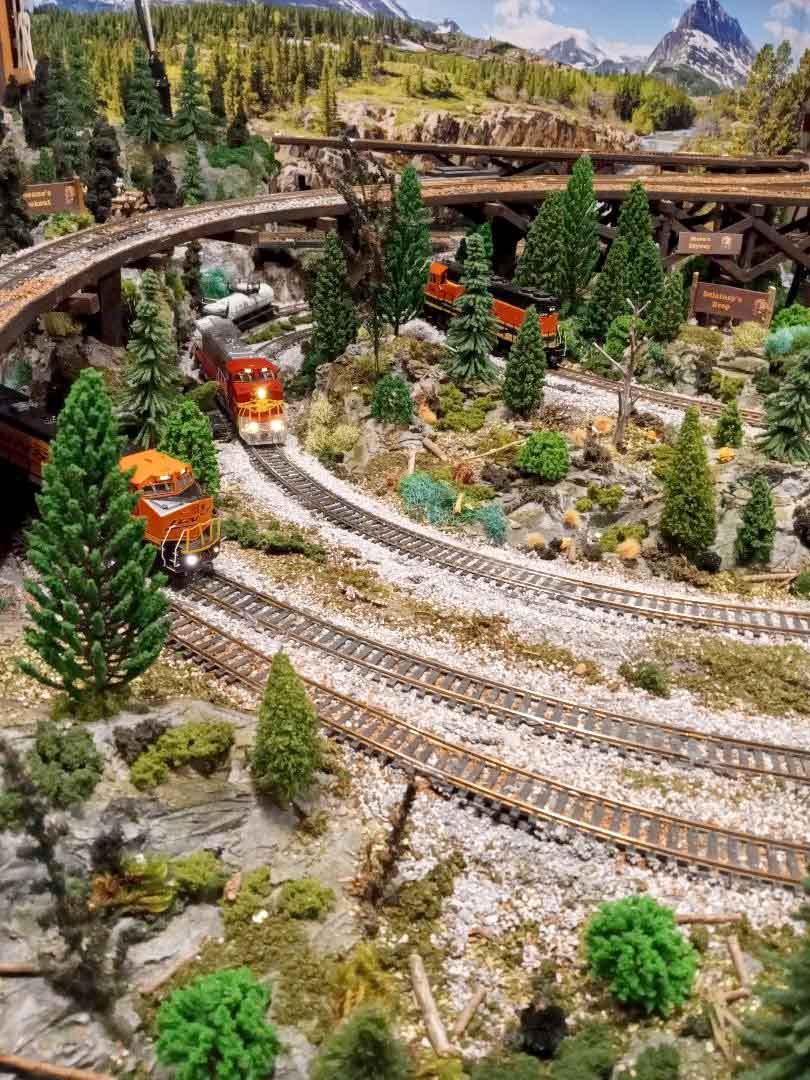 I still have lighting and signaling left to install and as everyone says, “you are never done”. Lots of touch-up and refining still to go as well. My immediate challenge is to get my locomotive’s couplers (new DCC models) to match my rolling stock couplers (old standard cars).

I almost forgot to mention, what you see was all done in 1 year and I am 80 years old, so some of the heavy stuff was challenging, but what a blast this journey has been. Never too late to start!

A huge big thanks to Gary. A wonderful narrative and a wonderful layout.

Please do leave your comments below.

That’s all for this time.

And if today is the day you get started, just like Gary, the model train Beginner’s Guide is here.