I decided to have a go at building a camera train.

Not knowing how well things would go I bought 3 of them. The cheapest I found them in the UK was £14.09. They arrived in a couple of days too.

The “manuals” could be a bit better and I found that the app it asks you to download doesn’t work on later versions of Android. Luckily I had an old tablet running Android 6 that still works and it installed fine on that.

The devices I bought tart transmitting immediately without the need for a password (even though a password is printed on the sticker). As the range is limited to 10m though I don’t think it’s an issue. 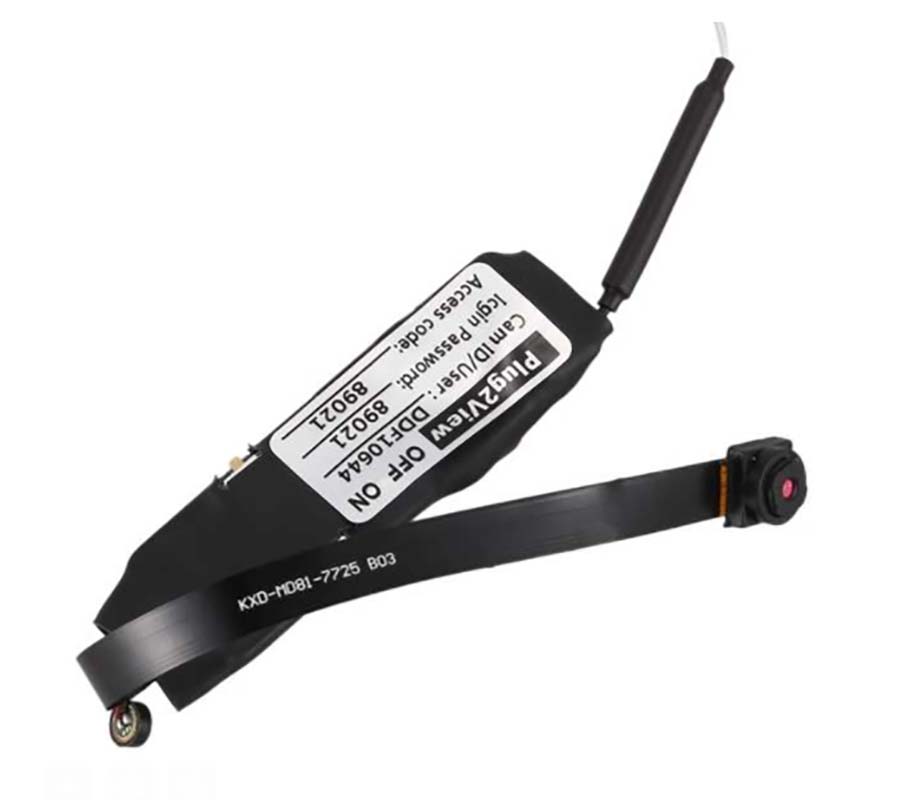 And come with a USB charging lead.

As the manual isn’t very explicit here are what the switches do: 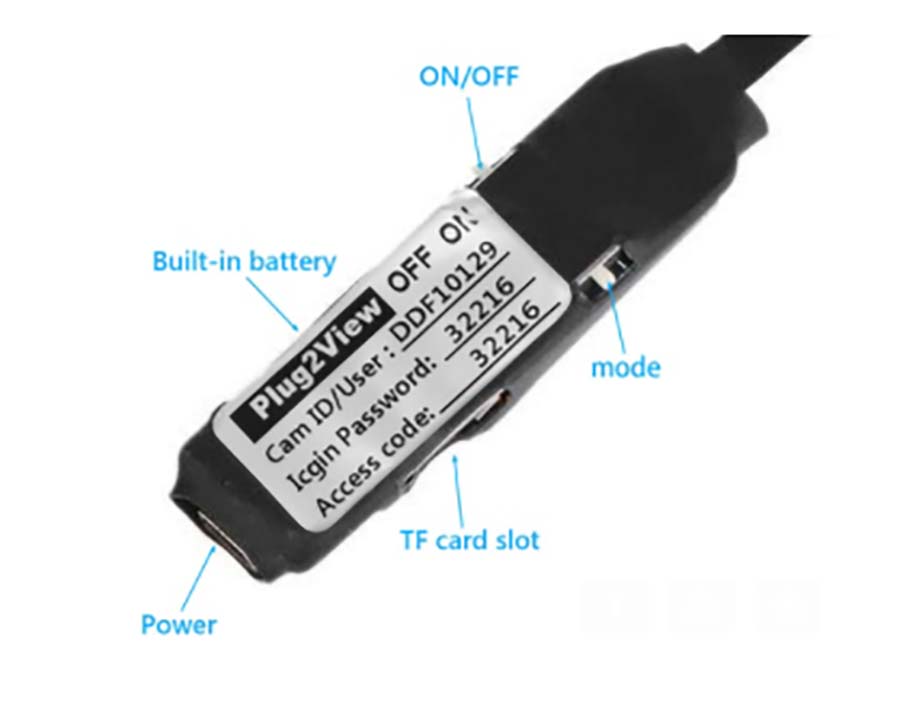 There is also another very small button tucked under the microphone cable that resets things if the unit stops working and the web site says they can take a card up to 32GB to store video. The app also stores videos without the memory limits.

“On/Off” does what it says.

“Mode” switches on WiFi. The unit sets a network up called THPC000027ULNEF and tablet connects to this. The switch has to be pushed towards the camera end of the device for this setting. Its other setting is IP, and it’s apparently possible to assign the camera a fixed IP address. I haven’t found a way of doing this yet, but I’ll report back if I do. Perhaps this is where the password might be relevant.

Note that all 3 units set up a WiFi network using the same name so having two cameras operating at the same time might be difficult. Again though, if the cameras are operating using fixed IP addresses perhaps this is possible.

I fitted the camera to a container wagon like this: 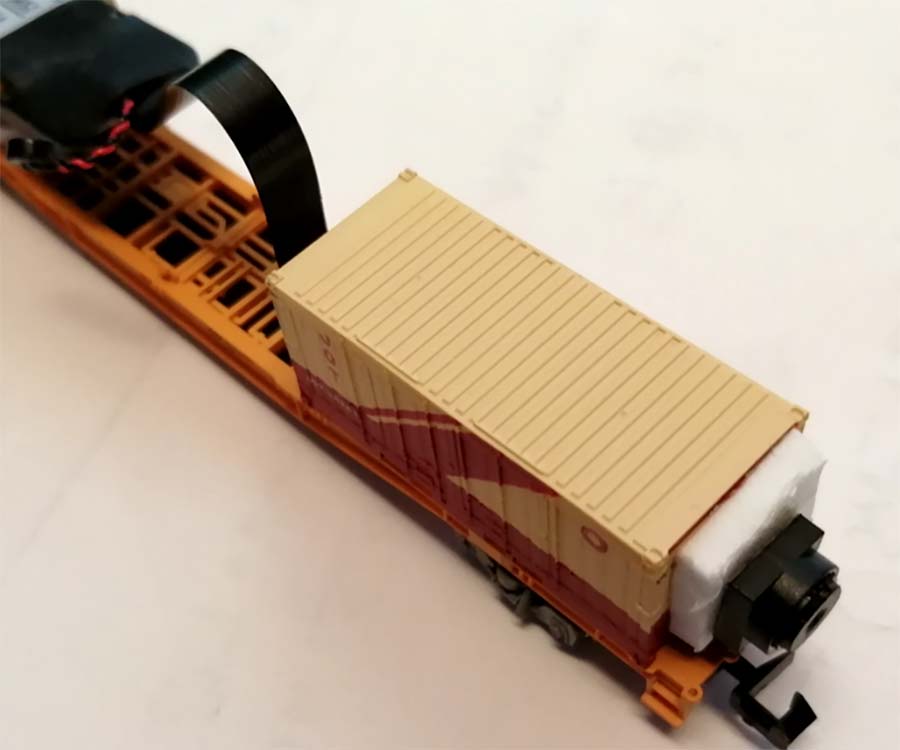 It’s fine on straight sections, but the field of view is very narrow, and on curves the camera is looking tangentially rather then following the curve. The tighter the radius, the greater the difference will be between the desired and actual sightlines.

This is made worse by having the camera mounted at the front or back of the wagon, as on tight curves the camera won’t be over the tracks at all, whereas on larger radii it might be.

The pictures below show the two extremes of a 541mm radius curve and a 243mm curve, with the camera front mounted: 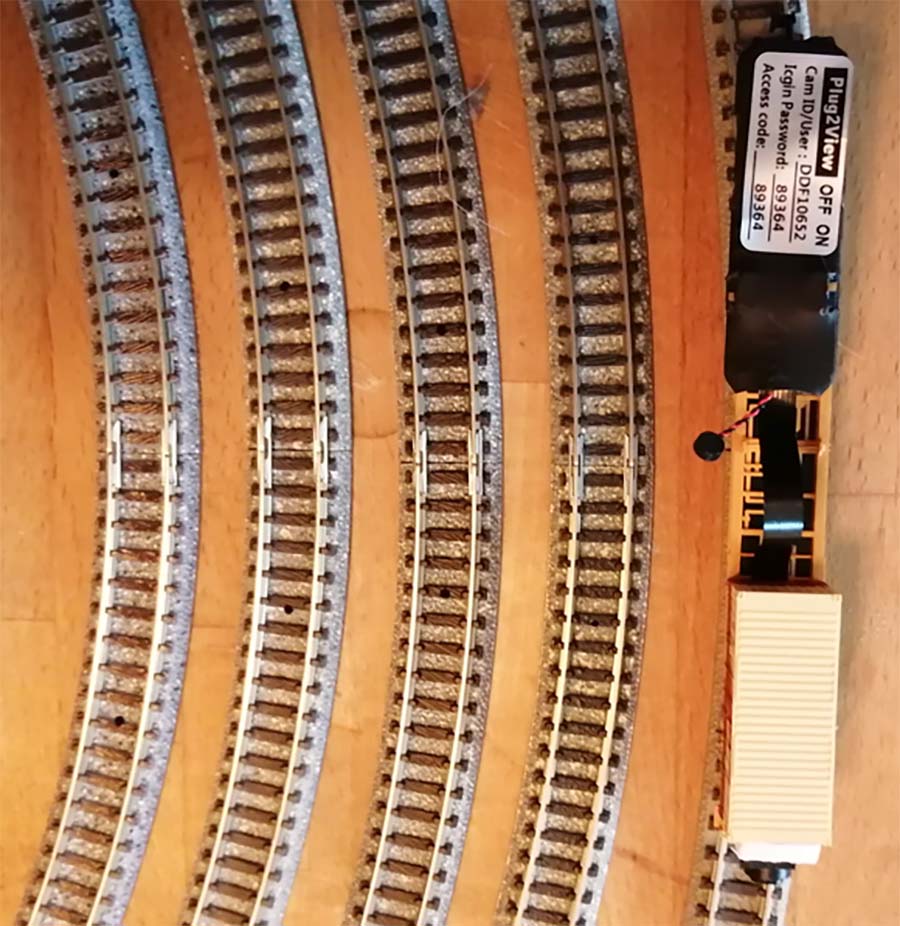 Here the camera is just about inside the 541mm curve. 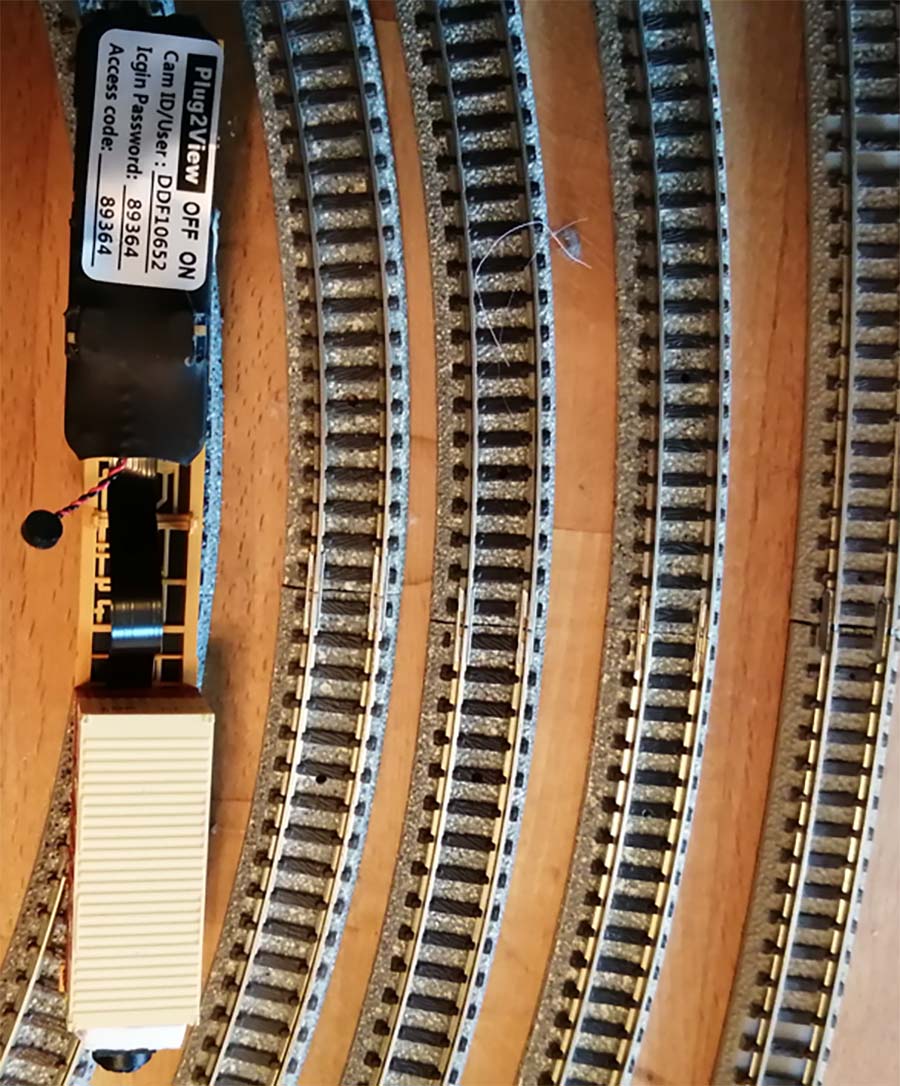 Here the camera is completely outside the 243mm curve.

All is not lost though…

The camera will always point tangentially to the curve, so it will point at 90˚ to the long side of the sleeper immediately below the centre of the wagon it’s mounted on.

If I mount the camera at that point on the truck it will always be inside the curve, so we’ll see at least some of the track ahead. The greater the radius, the more track we’ll see. The camera will still be pointing tangentially but if it’s above the mid point of the vehicle the perceived deviation between the actual and desired sightlines is diminished.

A shorter vehicle with the camera mounted above the electronics is one way to achieve this (but then overhead clearances might then be an issue). Another is to have two linked vehicles with the electronics on the rear one and the camera on the leading one. The shorter wheelbase will make the camera stay inside the curve more, even if it’s mounted at the front of its truck.

I hope this helps other modellers out there.

Now on to Dick.

He’s always been a thoroughly decent chap when I’m short on stuff to post – you’ll know his layout from the links below.

And now he’s sent this in which is a delight to watch:

“Hi Al, this is my you tube video link of the portable layout I set up with the help of my neighbor friend Dick Stern (oldtaz) who has sent you wonderful pixs of his N scale layout.

The video is just over 7 minutes long, all taken by oldtaz’s cell phone.

We had over four hundred visitors who enjoyed our efforts.

Many were intrigued by the track plan. It was a folded dogbone double track mainline with 4 sidings and two crossovers, but large enough to confuse people as to where the trains were headed. The music quits early on the video and I can’t seem to fix it, Earlier I had good music on there which was a problem for you tube so had to change to the music on it now.

Neither of us are healthy enough to do this public display work anymore which is why we both have N scale layouts to work on now.

I have spent a lot of time on my large California Zephyr Route N scale layout the past 2 months.

With 3 weeks left to work on it before I have extensive back surgery, progress may slow to a crawl for the next 3 months.

So I will be sending updates of the California Zephyr Route again very soon. It is a huge layout and I am the chief cook and bottle washer with no helpers.

Anyway I hope there are some that will enjoy the video.

To all of our model train friends on your site, please be well and safe and you too Al..

Thank you so much for this site for us to connect with each other and share our enjoyment with the hobby.

And here’s Dick’s other layouts.

A huge thanks to Paul and Dick.