John’s been in touch with his inglenook layout:

“As you say, It is all about getting started!

There are some common complaints about this wonderful hobby we share…

All four of these common complaints can be answered with a small shunting layout.

On my side of the pond, the common shunting layout is the Timesaver introduced by John Allen in 1971.

He had built it many years before and it was very popular with his operating crew.

Some here in the states believe that the timesaver may be the most copied and adapted layout design.

Funny thing that… Alan Wright dreamed up Inglenook Sidings on your side of the pond about the same time as the Timesaver had been introduced… Actually Inglenook Sidings was an operating innovation to a plan that had hit American shores about 1934 BUT was also found in A. R. Walkely’s “Suitcase layout ” of 1926!

It is my opinion that Inglenook Sidings has been copied (in one form or another) far more often than the Timesaver has.

My current layout project is my ninth or tenth “Inglenook” copy.

I built my first Inglenook as a folding layout that I could take to my local hobby shop for operations on “exhibition day” that they had each month. That one was six feet long in its open form and it folded into a space that was only 8 inches wide and 36 inches long. I ended up giving it to a teacher for use in his classroom.

My second was my take on Simplex by Chris Ellis who used to be the editor of Scale Model Trains and later Model Trains International. (I have now built several copies of Simplex to try different ideas.)

The current project is yet another Inglenook — An Inglenook built specifically to be part of a sectional layout that will be easy to take to “model train shows” — Exhibitions — and show what can be done in a small space.

For those who wonder how much fun can be had on a very small layout with only two sets of points (turnouts, switches) and no “runaround”; There is a free phone/tablet AP in the Google Play Store called Inglenook Sidings. This free AP is a great way to try this layout idea out… And not waste any time or money on something that you put time into and then are underwhelmed when you are finished.

My Little Layout happens to match the Phone AP Inglenook exactly. This was a “happy little accident” to quote the late Bob Ross. 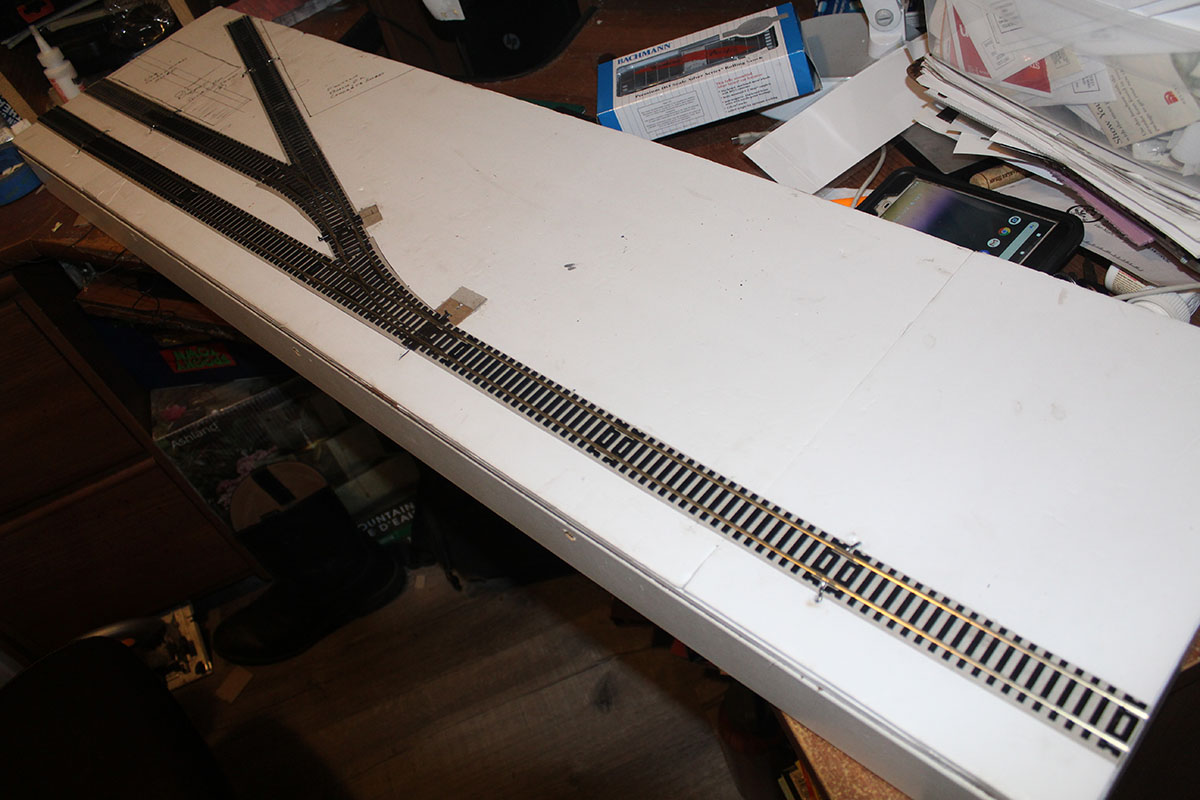 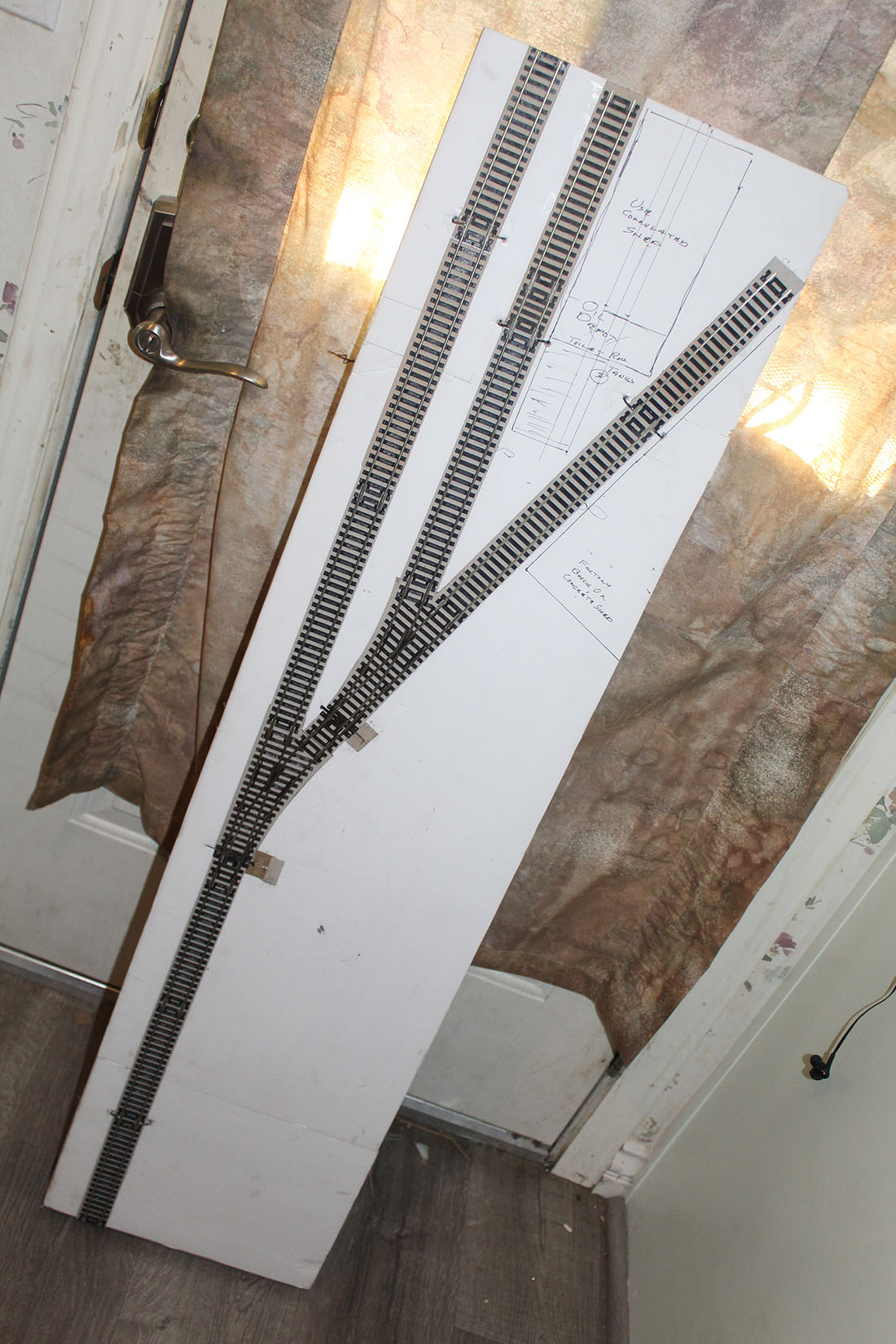 For this particular layout I chose to use Peco Setrack points (Switches/Turnouts). These are sharp for American practice but with the small equipment that I planned to use, they are perfect for the project.

I will be using older style equipment that would have been common on American railroads through the 1960’s. If I were to be planning on using more modern equipment, the layout would need to be larger.

If I were to be using equipment that would be common for the 1980’s and into the 1990’s, Peco Streamline Small Radius points could be used and the layout would need to be at least six inches longer if not a foot.

Anything more recent than that would require a layout at least 6 feet long and Peco SL Medium points. Note: It is my preference to use Peco products for my turnouts (Points). I find them to be more reliable than the Atlas switches (points) available here in America… Snap-Track Atlas switches work for anything up to 50 scale foot cars… Anything longer and you want to use #4 or #6 switches…

This Little Layout fits in a space that is 4 feet long and 1 foot wide. I could have gone narrower and made adjustments by bending one of the spur tracks. Again, the longer the equipment, the longer the layout needs to be.

One can make it so that it folds if storage space is an issue. A different solution is to make it so that there are two pieces that bolt together. Here are some examples from other layouts that I have built… Simplex, Little Walkeley, Sandy Flats, and my first Inglenook. 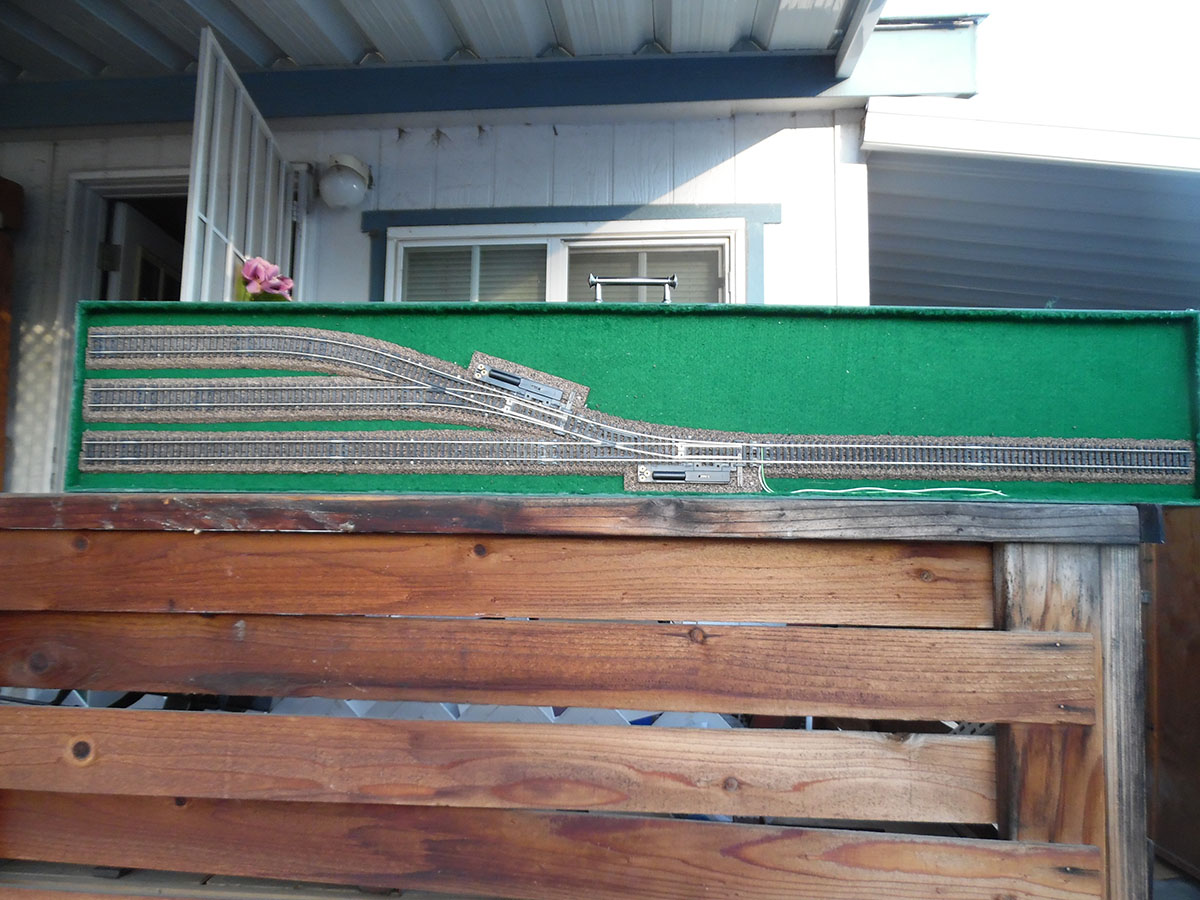 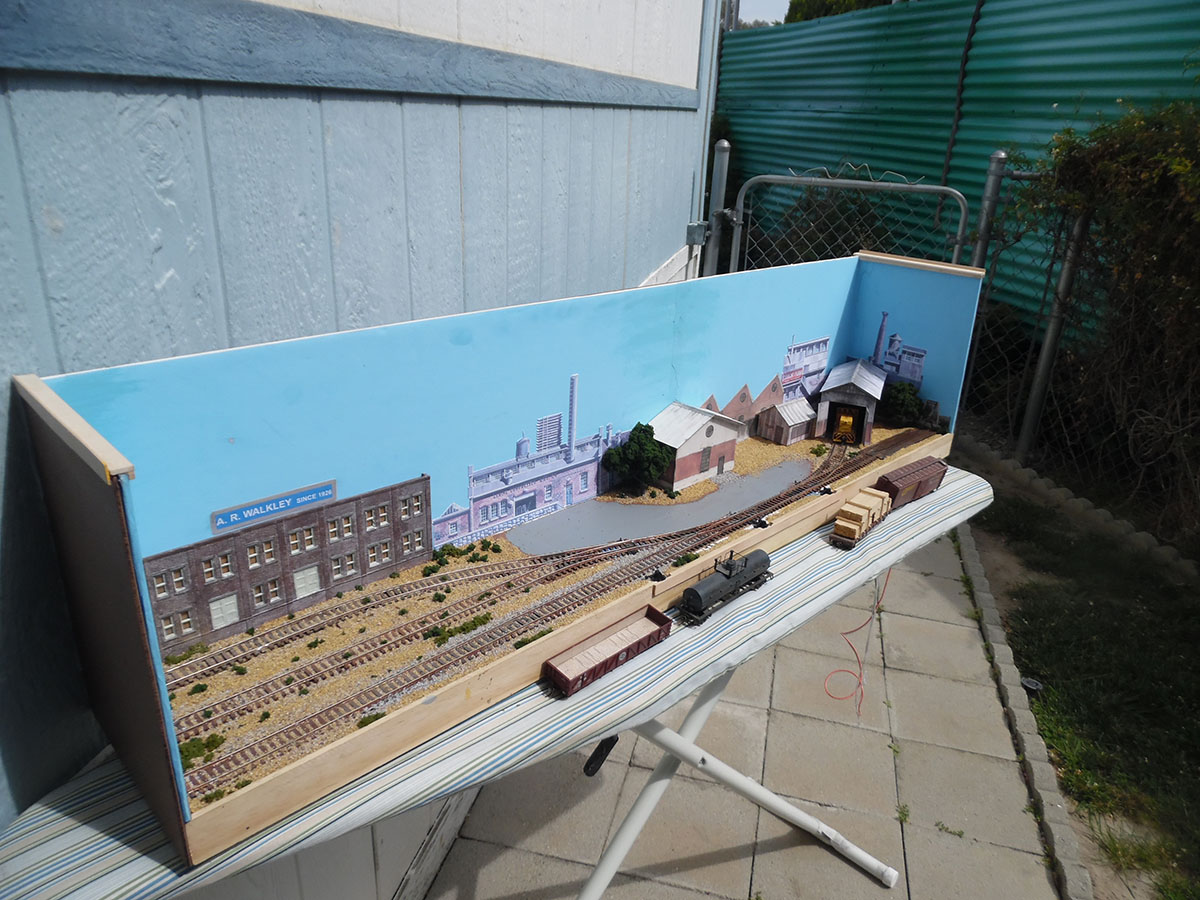 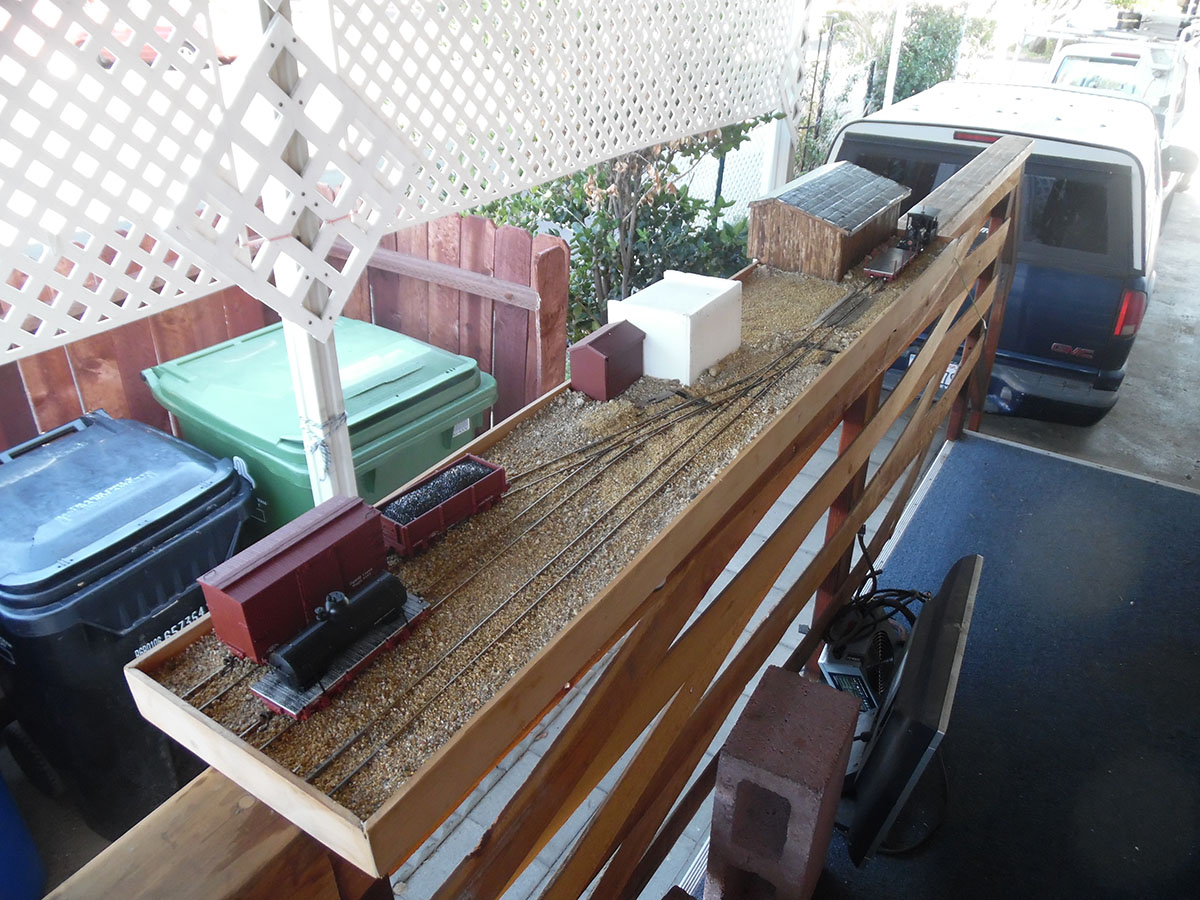 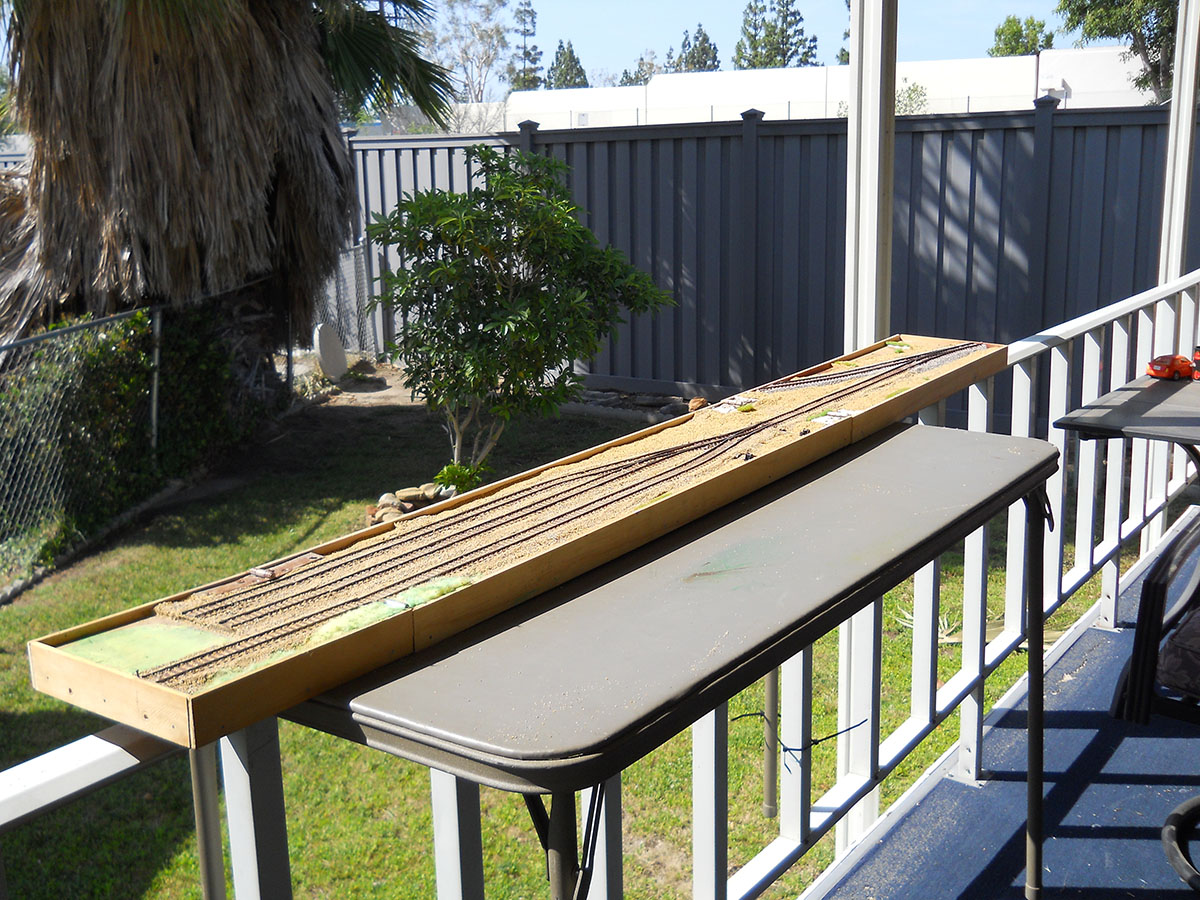 So that one knows what the eventual goal is, I am planning a layout in at least 6 modules that can be assembled into a layout 3 feet wide and 7 feet long.

The inglenook and another “Micro-Layout” based on a Jack Trollope design known as Microbe Yard will be the two largest pieces at 1 foot by 4 foot each.

The ends will be made out of 4 18 inch “square” pieces using 18 inch radius curves. The intention is to interest people in the idea that one does not need either a basement or “Brewster’s Millions” to have an operating layout!

A second goal in my plan is to use Al’s print-out kits for as many of my structures as possible. Paper craft structures are not as common in the United States as they seem to be “across-the-pond”.

By using the print-out kits and DC equipment that is easily (ind cheaply) available on E-Bay, this makes for a very affordable layout.

The message is that one can start simply to build skills that will make a larger layout an easier transition if one wants to move in that direction. I once wanted a large layout… In time I found that “smaller” is easier to maintain.

The foundation of any layout is the baseboard… The better the work, the better the foundation. The baseboard for my “Little Layout” is a bit overbuilt because of the expectation that it will see at least as much abuse as use. Remember, this is built to be moved frequently! Every board is glued together and screwed with drywall screws for extra strength.

The next most important item is the track. What your trains run on needs as much attention as the base you put or track on. I mentioned that I am using Peco and not Atlas… I am also using code 100 rail rather than something with a more scale appearance. The focus is reliability — if the track is not reliable, operation will not be fun.

A big advantage of Peco points is the over-center (over-centre?) spring that means that switch throws are not needed… I will use them anyway (Caboose Industries 202s) but they are “belt and brace”. I do use a small piano wire in a trough between my switch trows and the points themselves. There are other solutions and a magazine like Model Rail or Railway Modeller often features some of the alternatives.

With the high rail (code 100), track detail becomes important. I spray my track (protecting the points) with a darker brown to hide the height of the rail (optical illusion). Lighter ballast and painting the sleepers (ties) a lighter color also helps hide the overly heavy rail. (A trick I learned reading Continental Modeller many years ago). 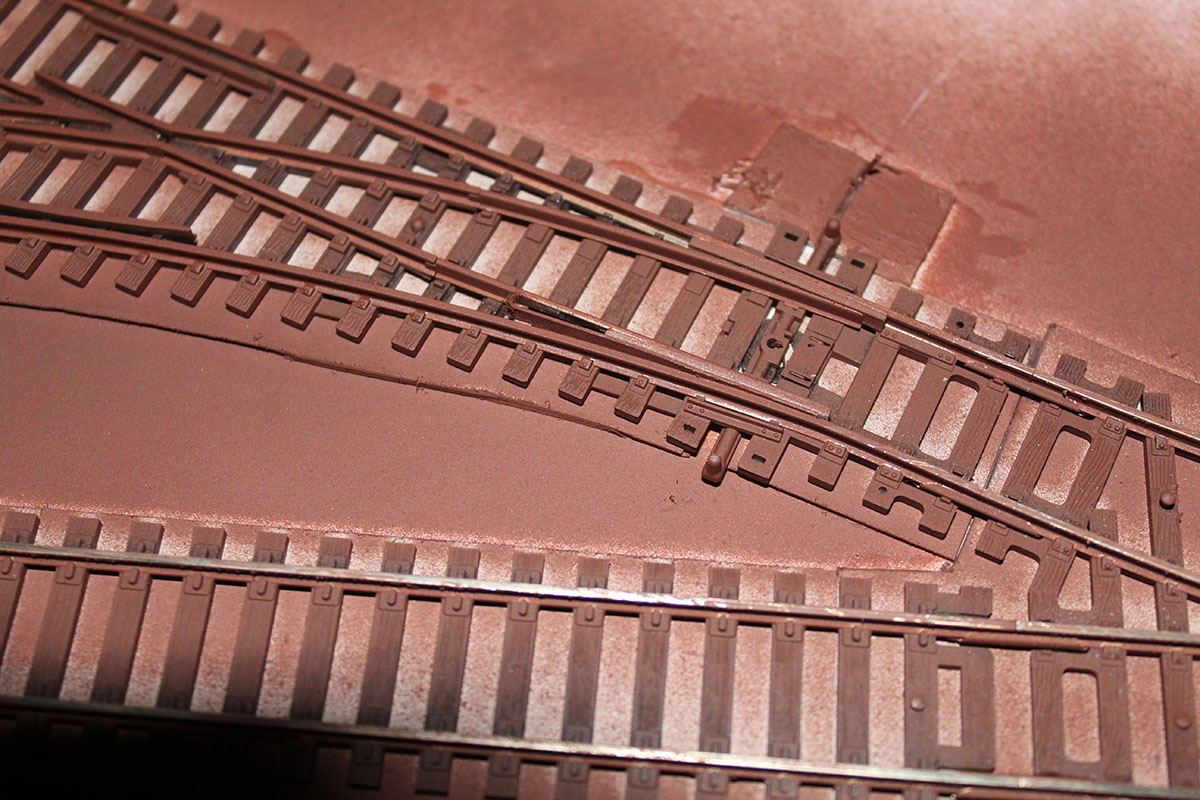 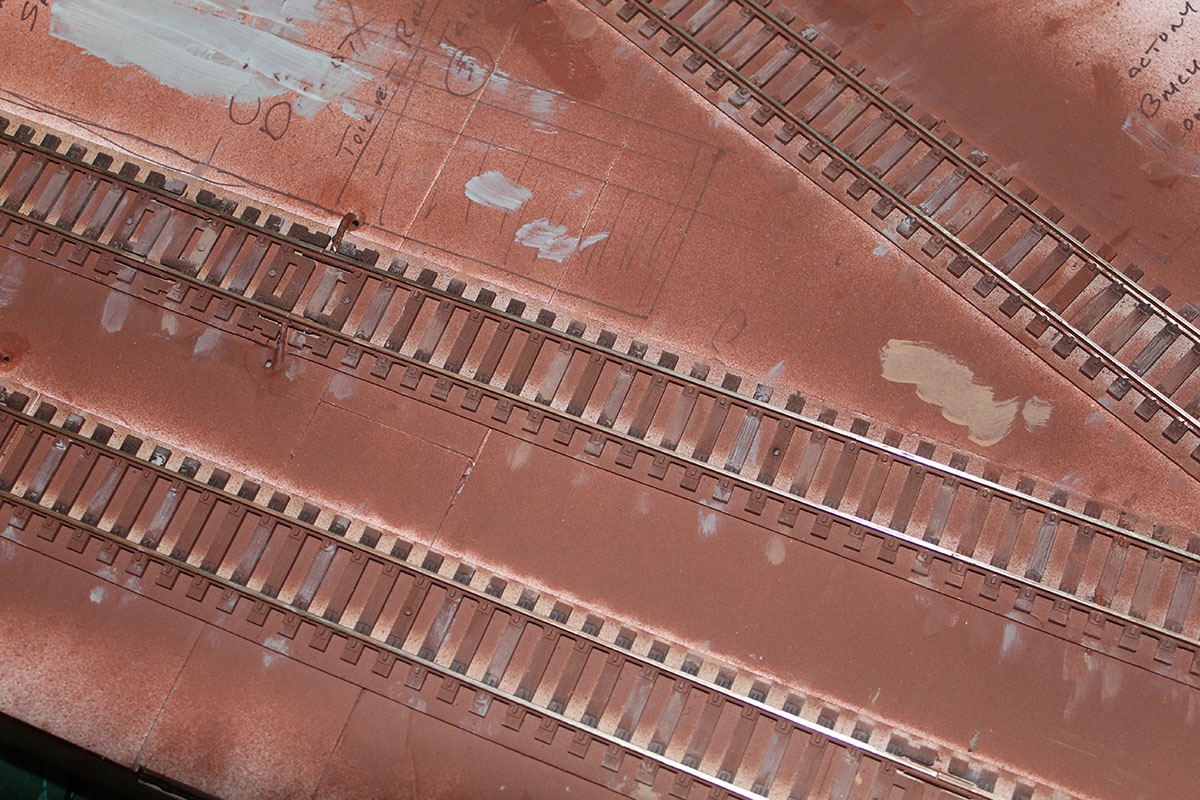 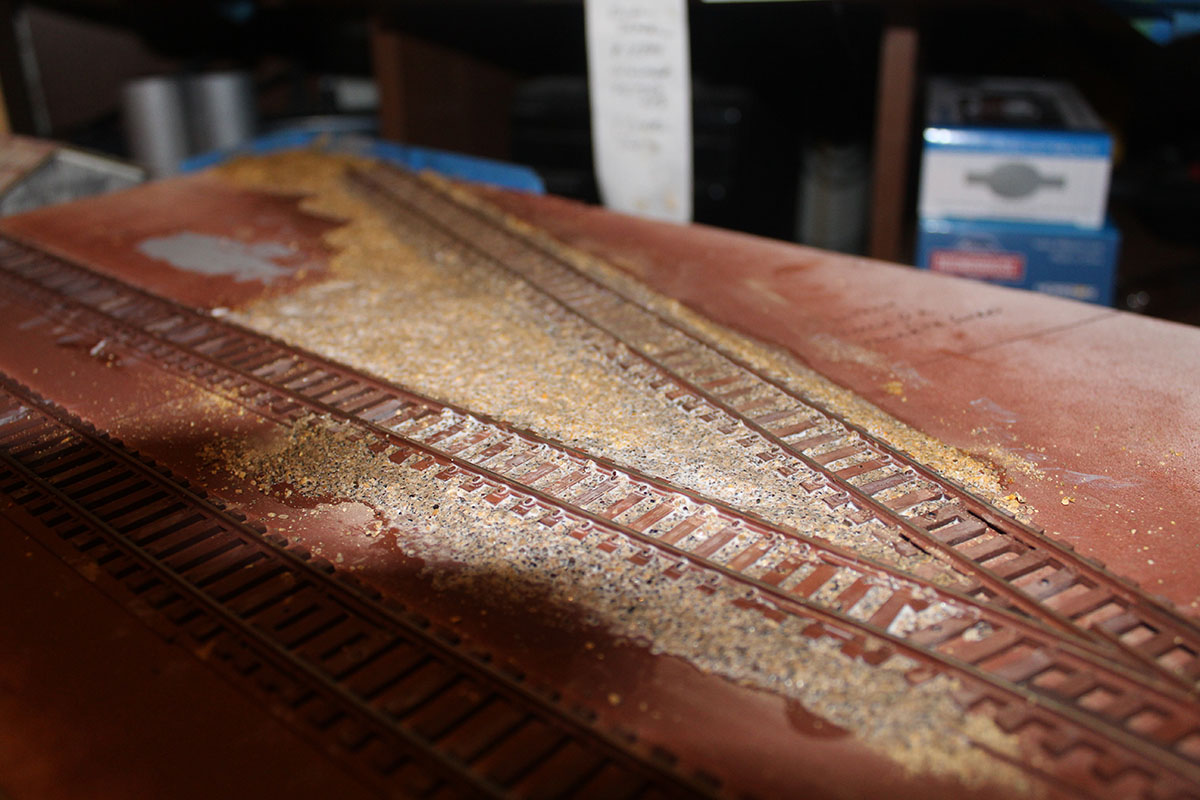 With track in place and ballast down, I wanted to add a road. As much as I love building Al’s print-out structures, his road was a new idea for me. I had always used old fashioned techniques before.

The road print is very believable as are the sidewalks. I added a level crossing with some card that I had stained with wood stain. (Here in the States we would call it a road crossing). 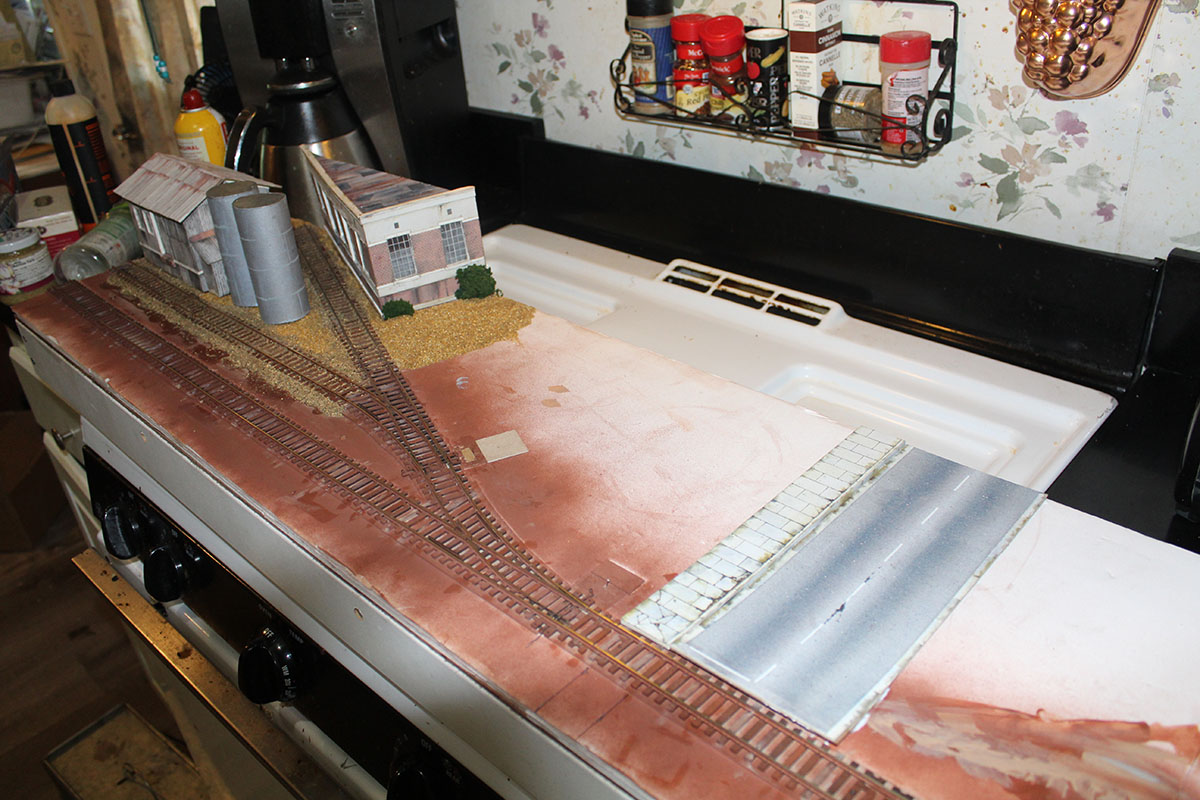 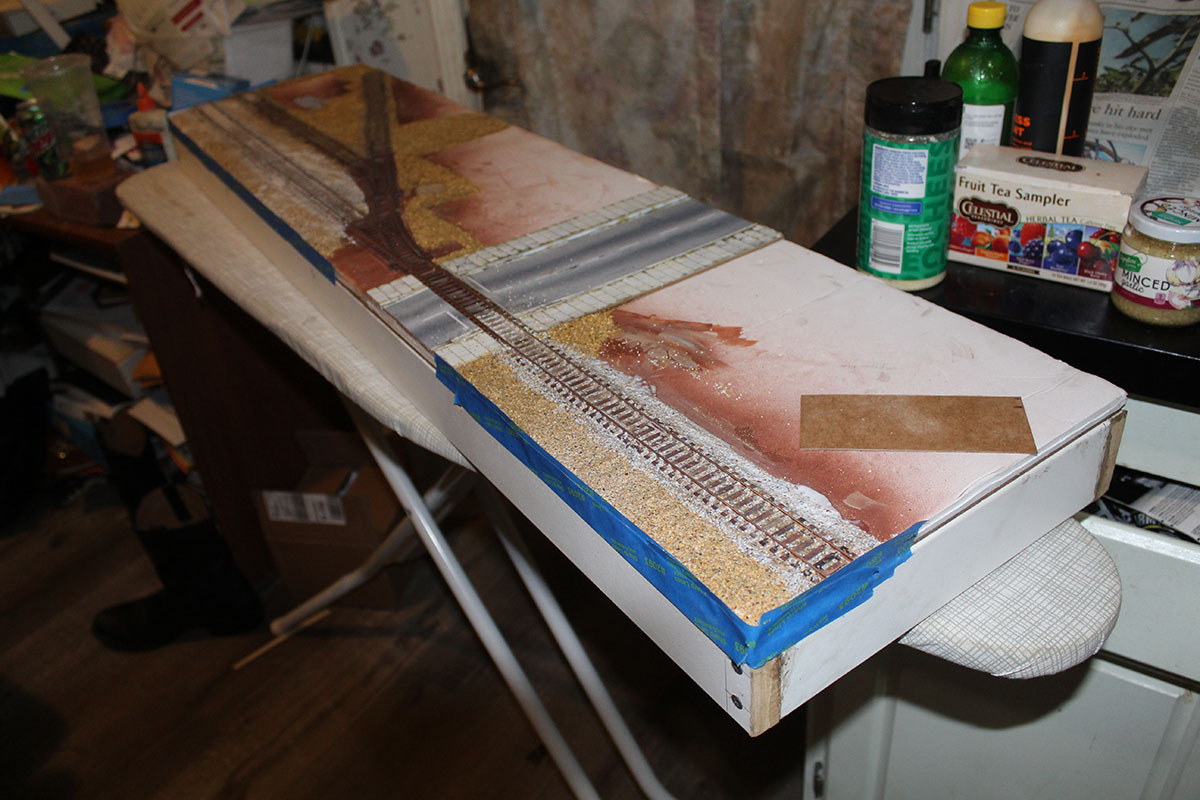 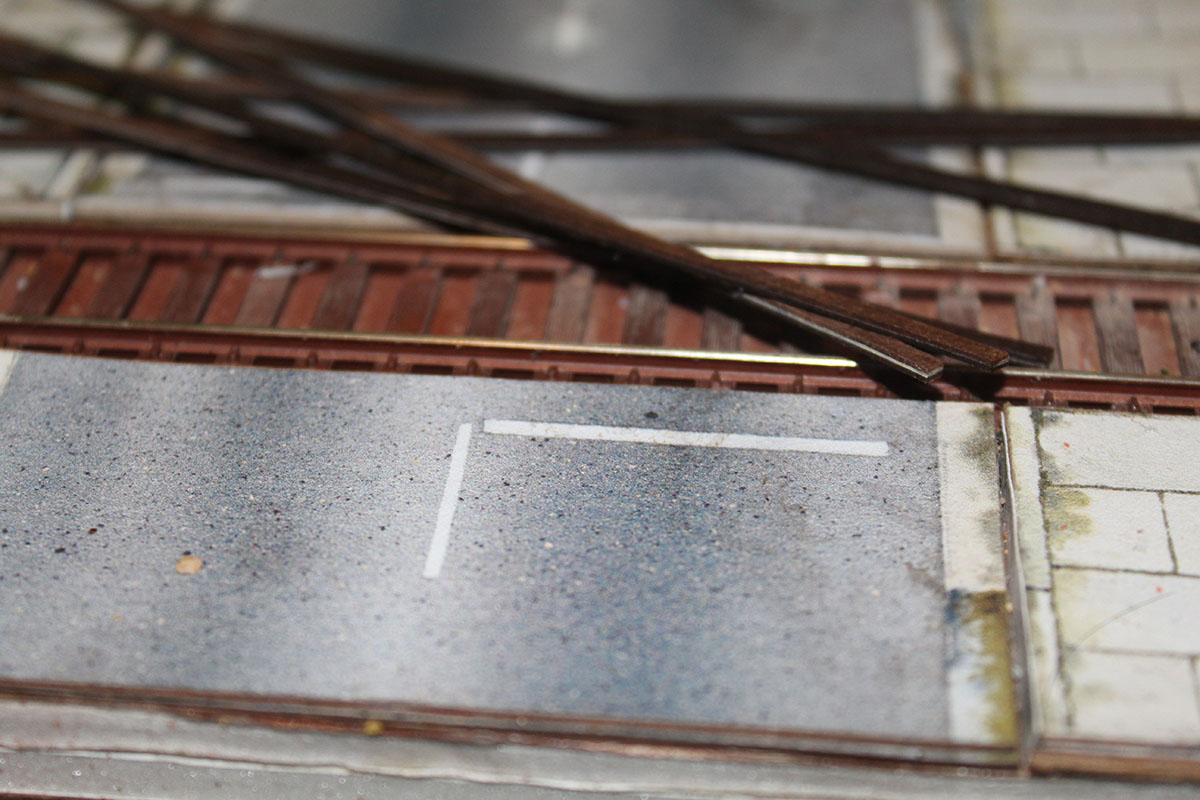 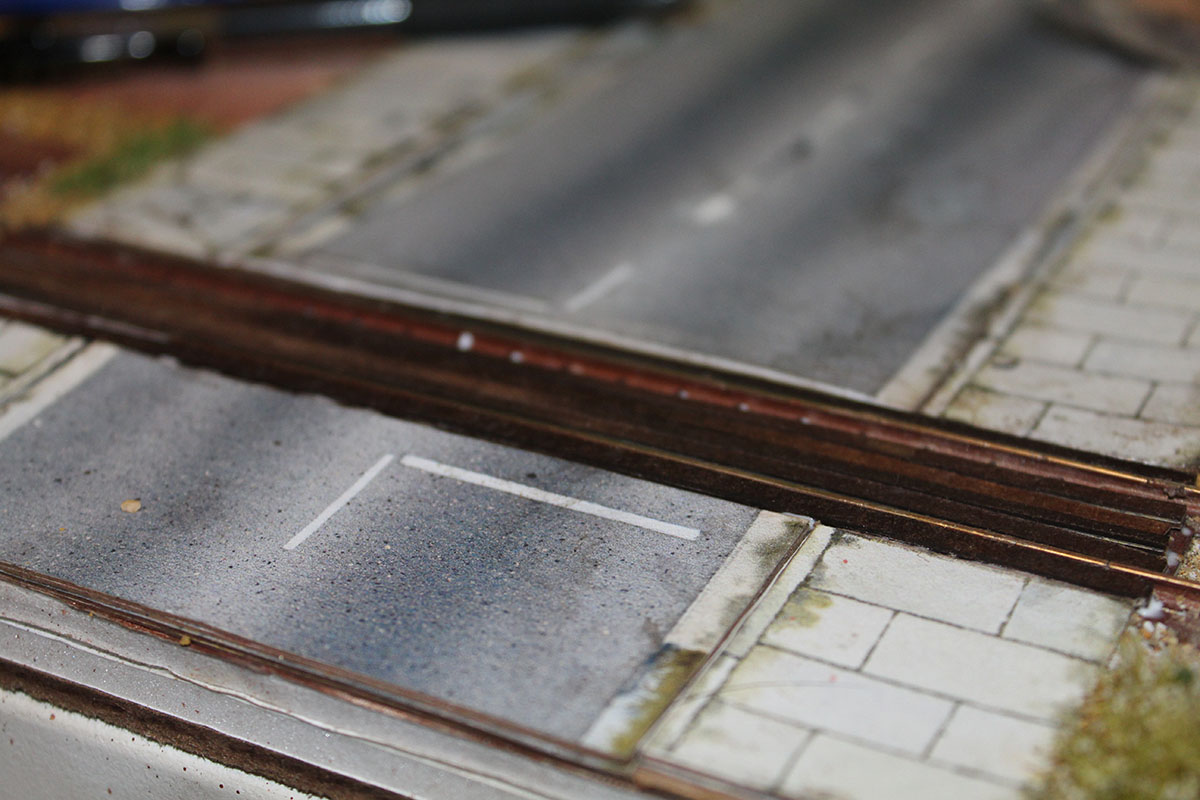 Once a layout has track, the scenery tells the story. My little layout is set around a small town with a couple of industries. At the moment this represents the “End of track”. One industry is a petroleum products distributor… The second is either a manufacturing building or a food products plant (I have not made up my mind yet!

My Petroleum Products distributor was built using Al’s print-out enginehouse… The one that looks like corrugated metal. The oil tanks are made from a pair of the tubes that are the core of a couple of loo paper rolls (Toilet Paper rolls here in the States) 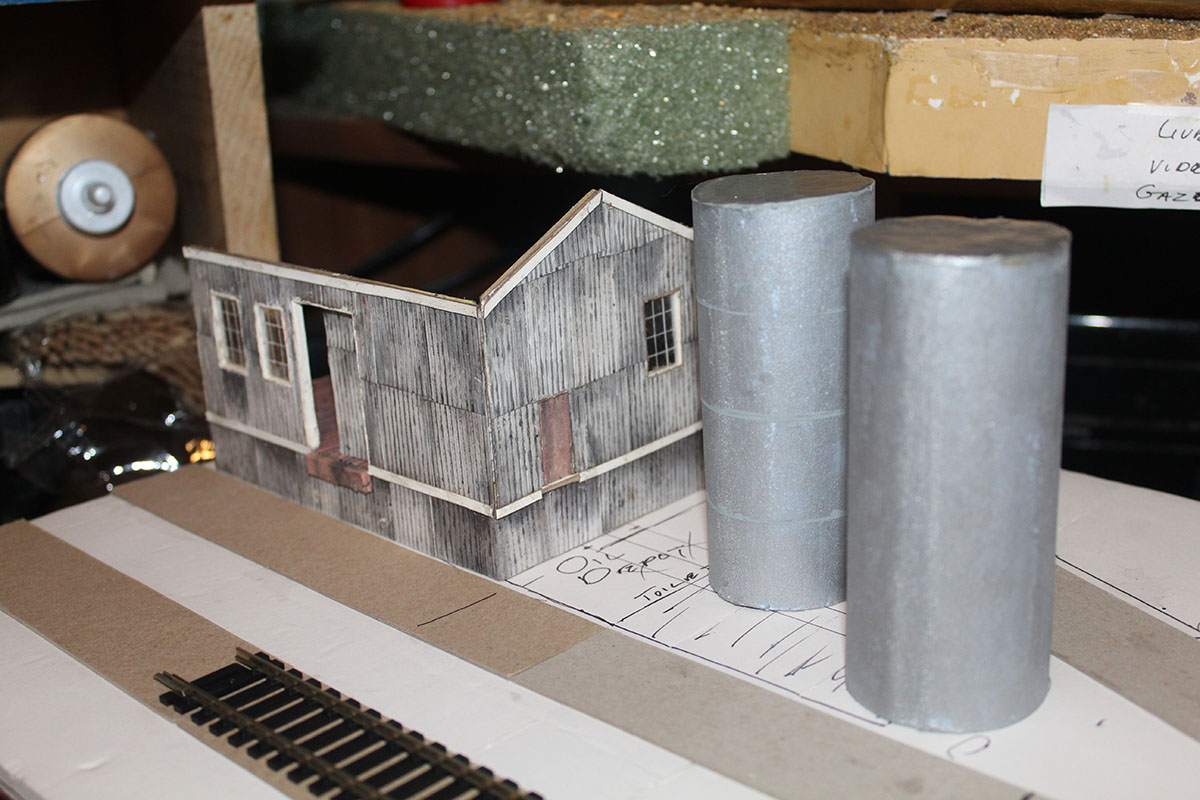 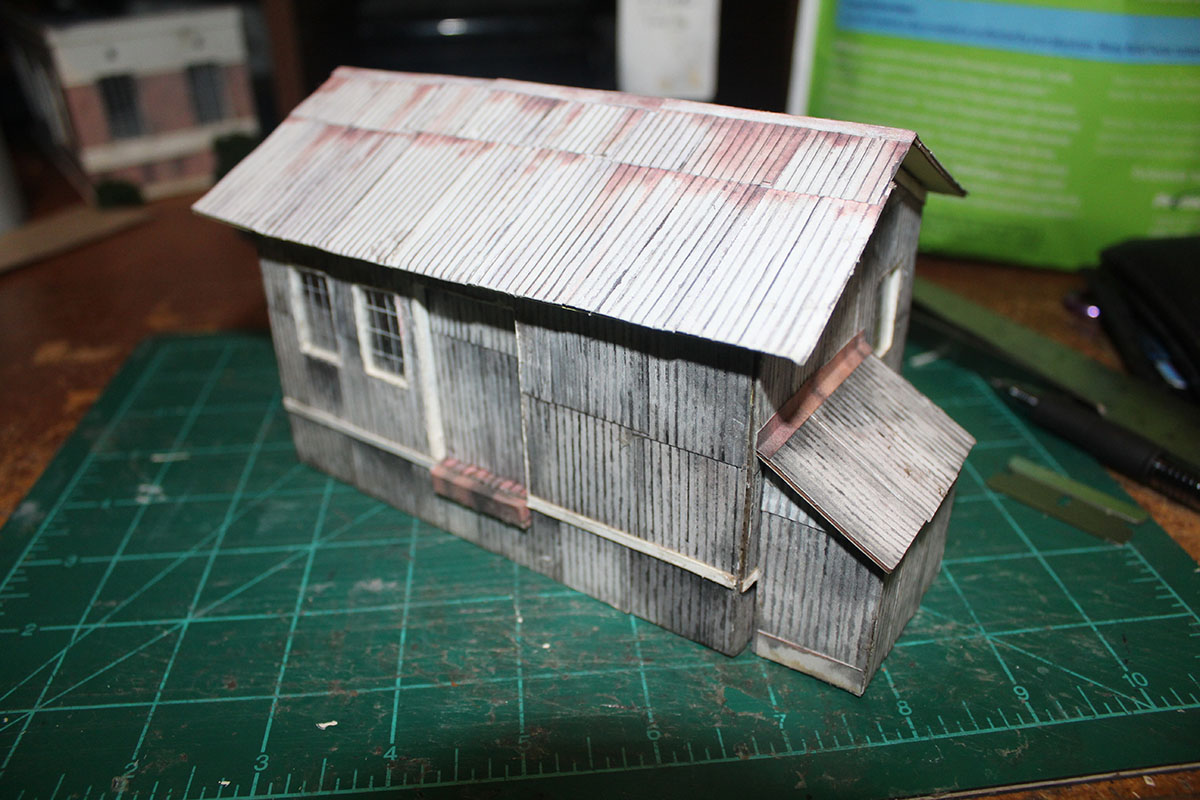 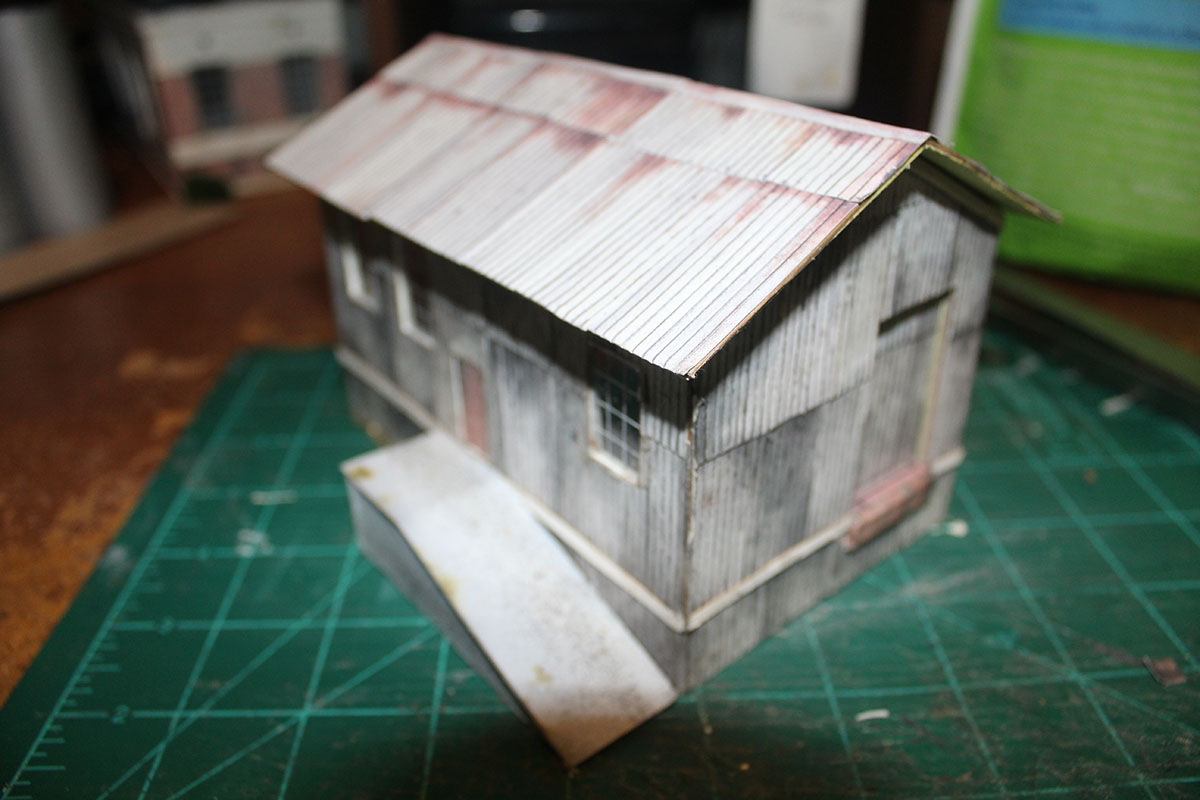 The second industry was to be a machine shop BUT in the interest of being able to have a greater diversity of cars visiting it, it may become a food distributor or cannery… In America we produce a lot of food and we eat what we can, what we can’t, we can! (I believe across the pond you would say that we “tin”). 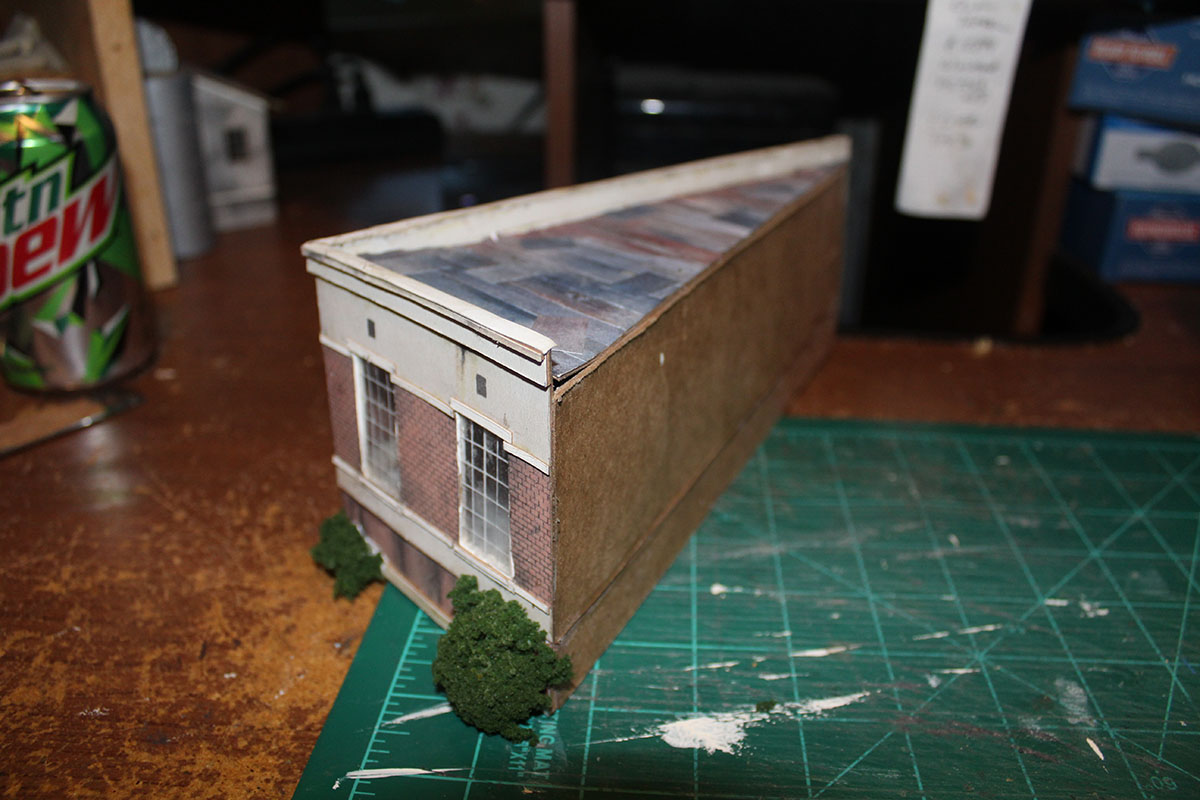 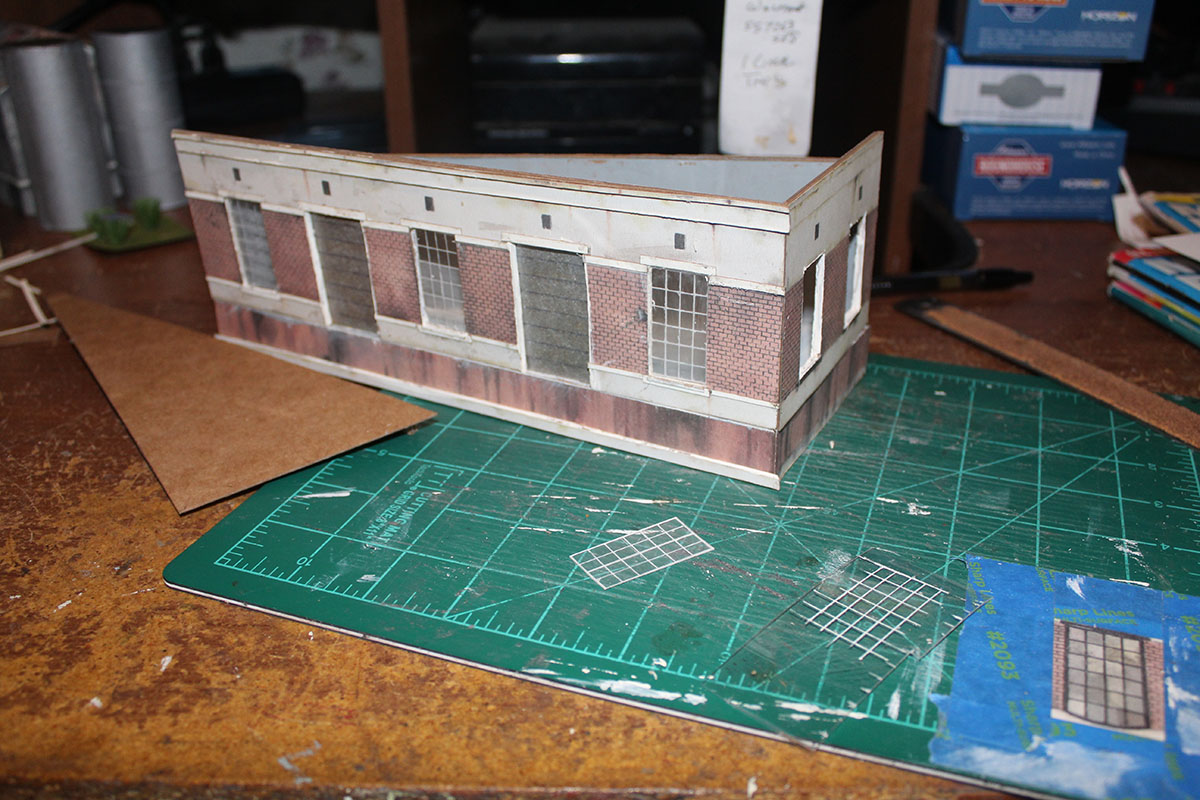 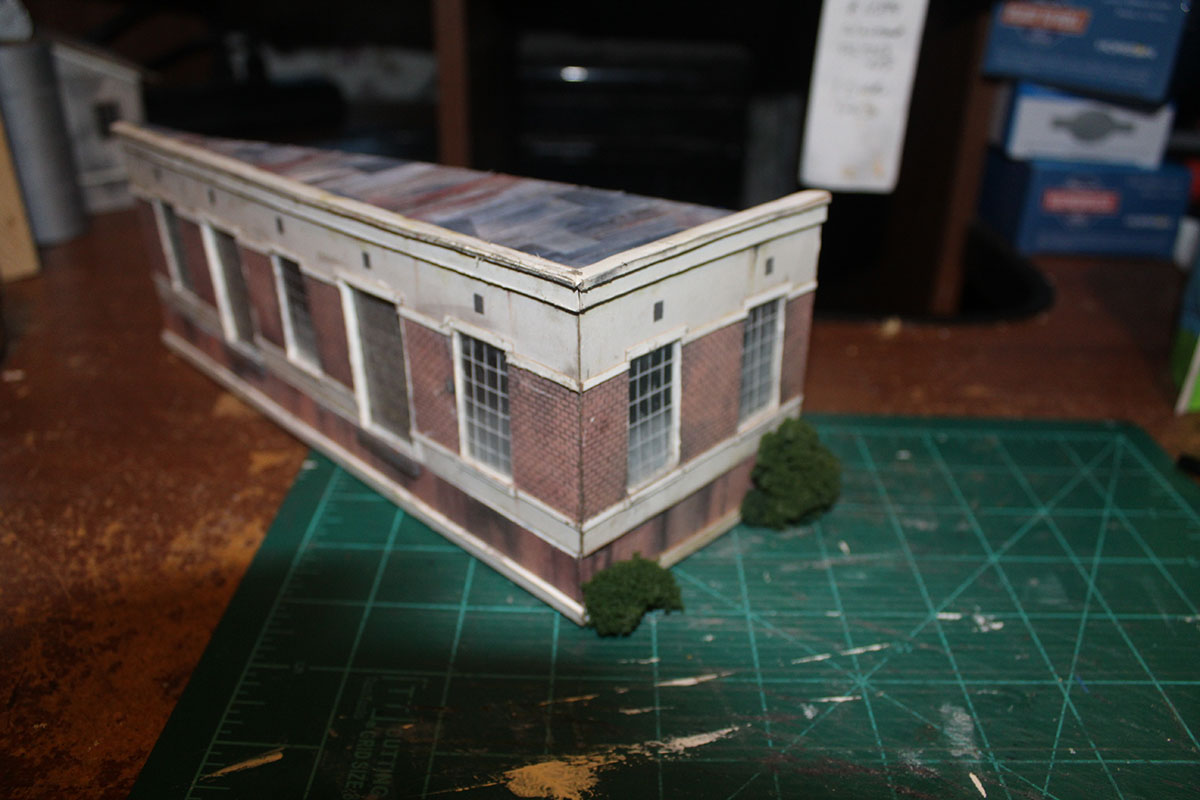 I just finished a diner…. Have fun figuring out the kits I used.

Yes, every building you see is from one of Al’s printable buildings kits…. 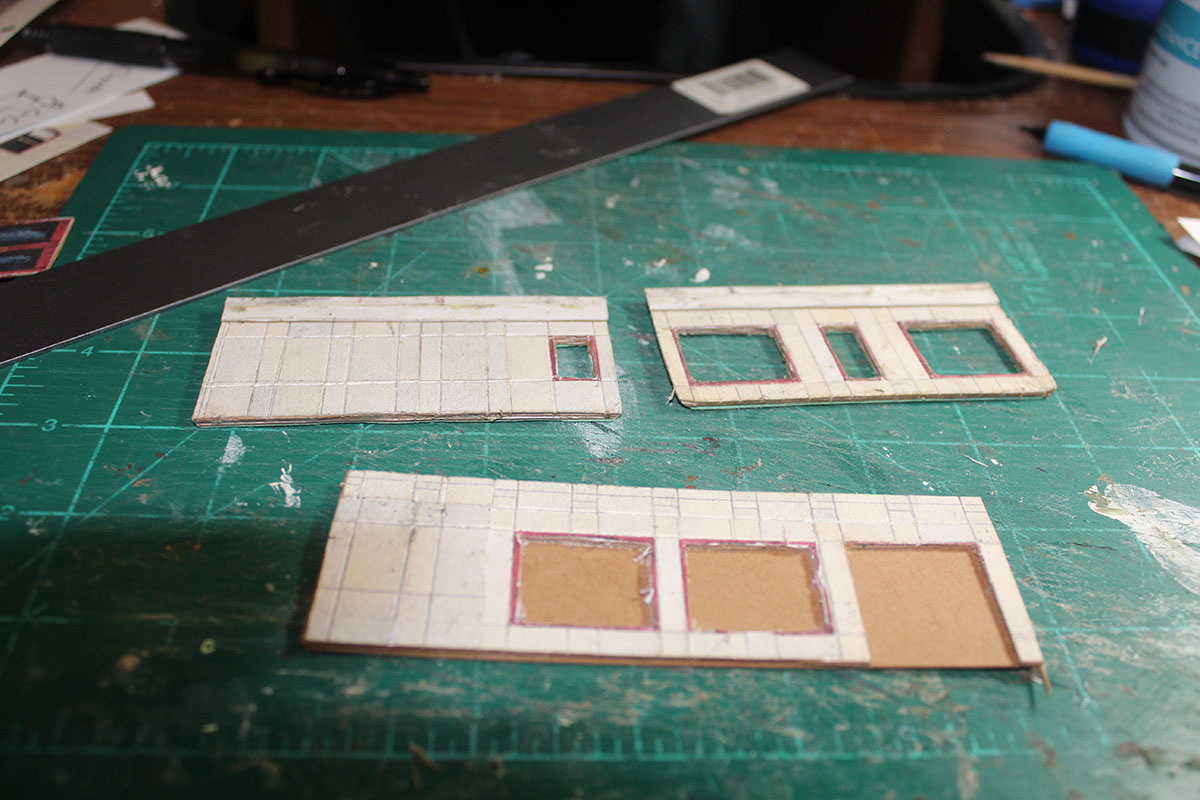 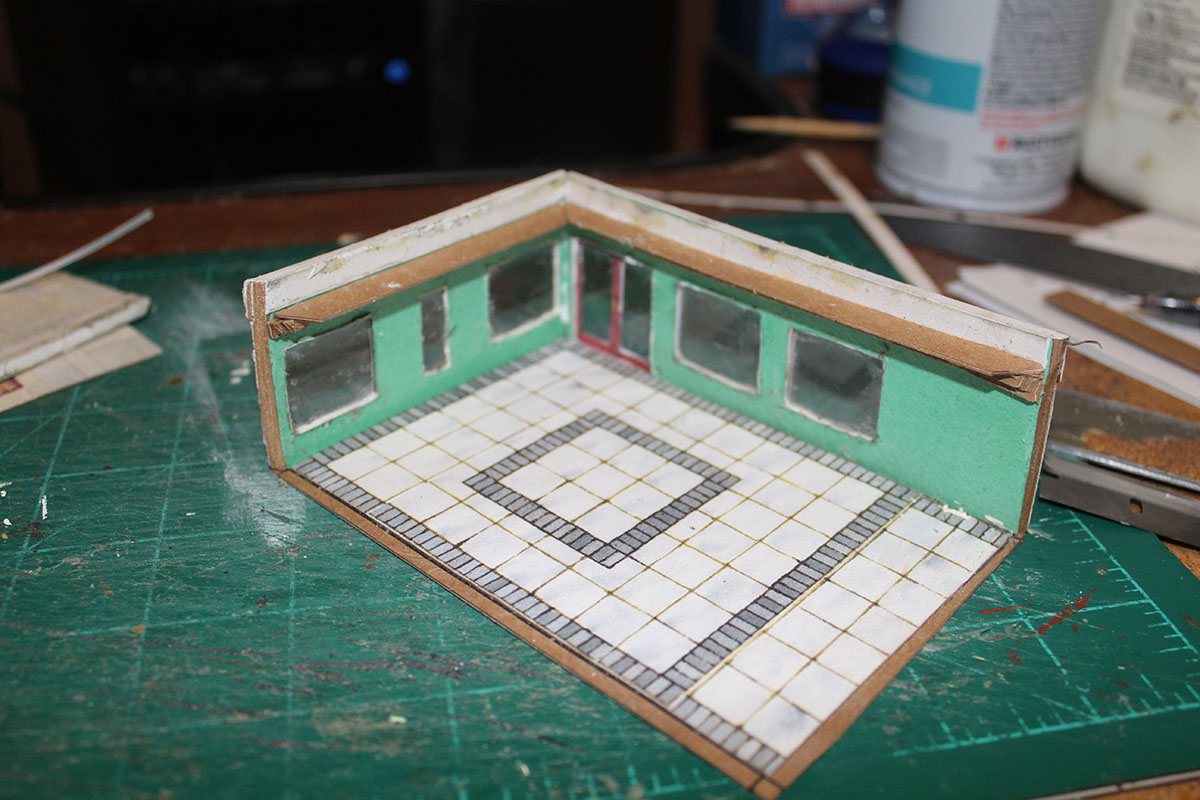 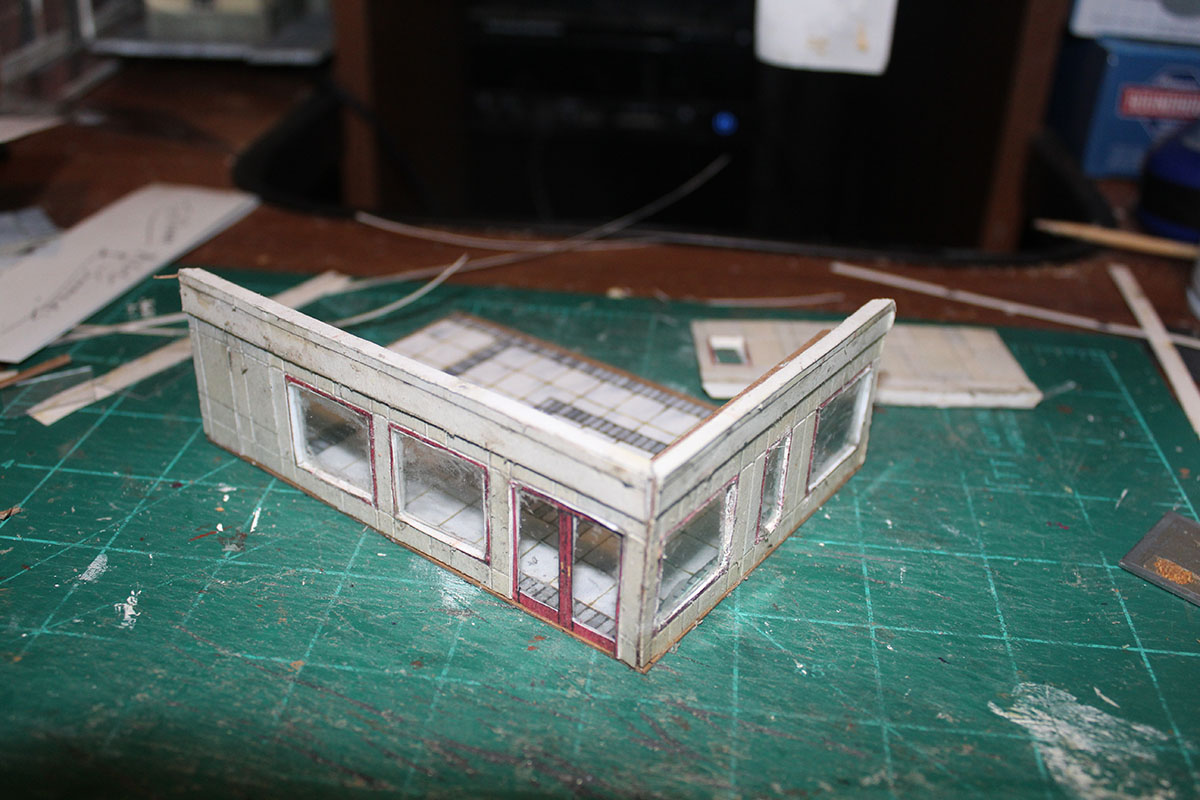 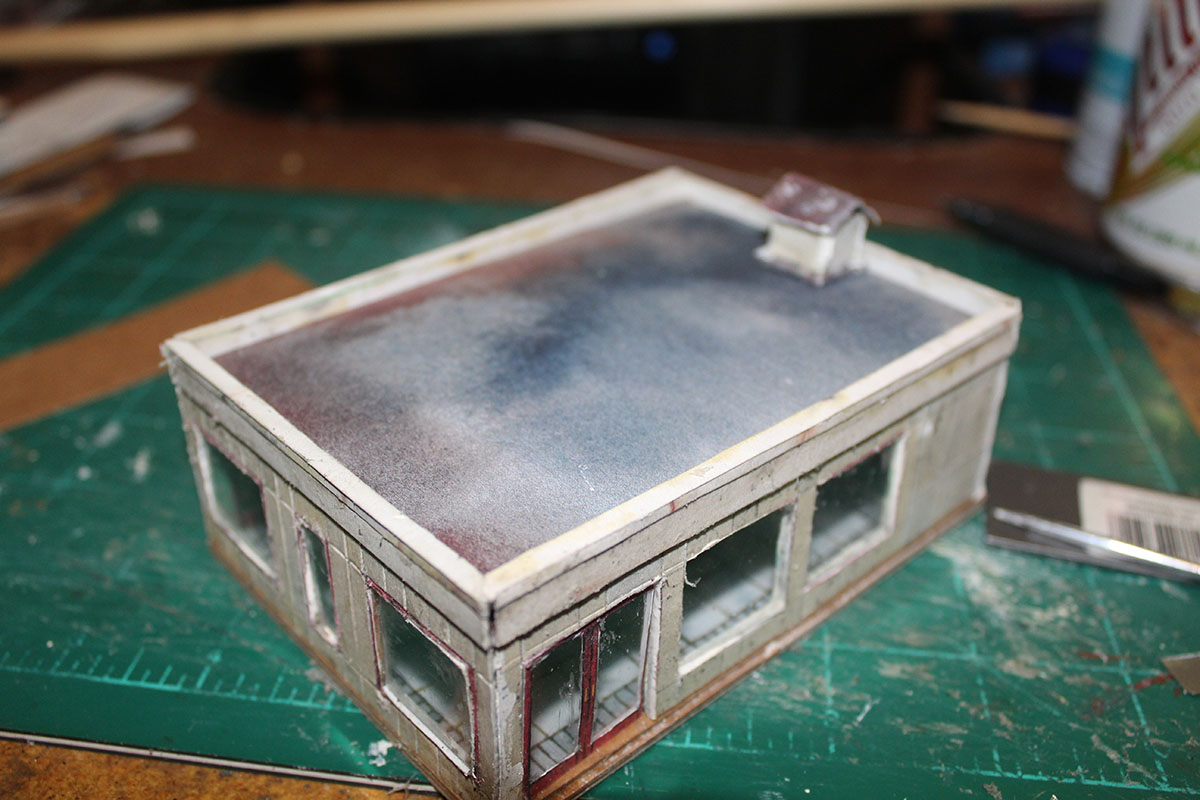 Here it is along with the station.

All my structures are removable from the layout… 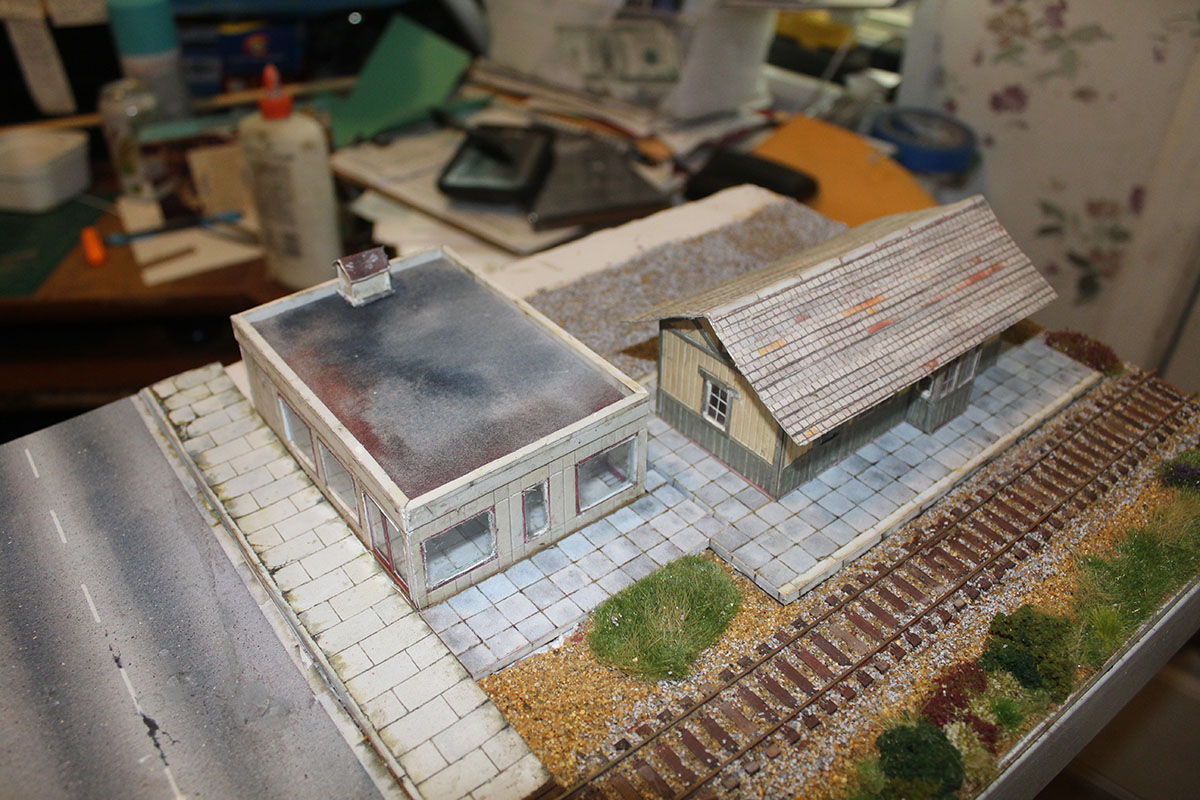 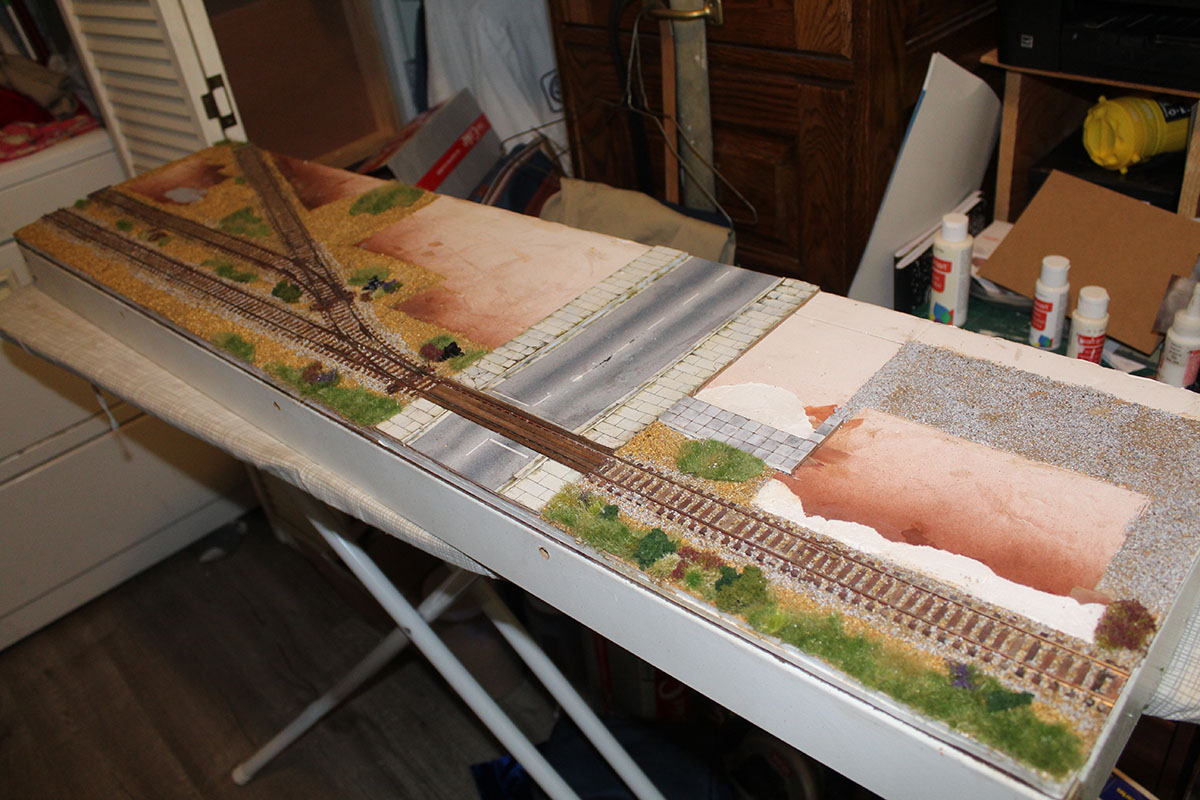 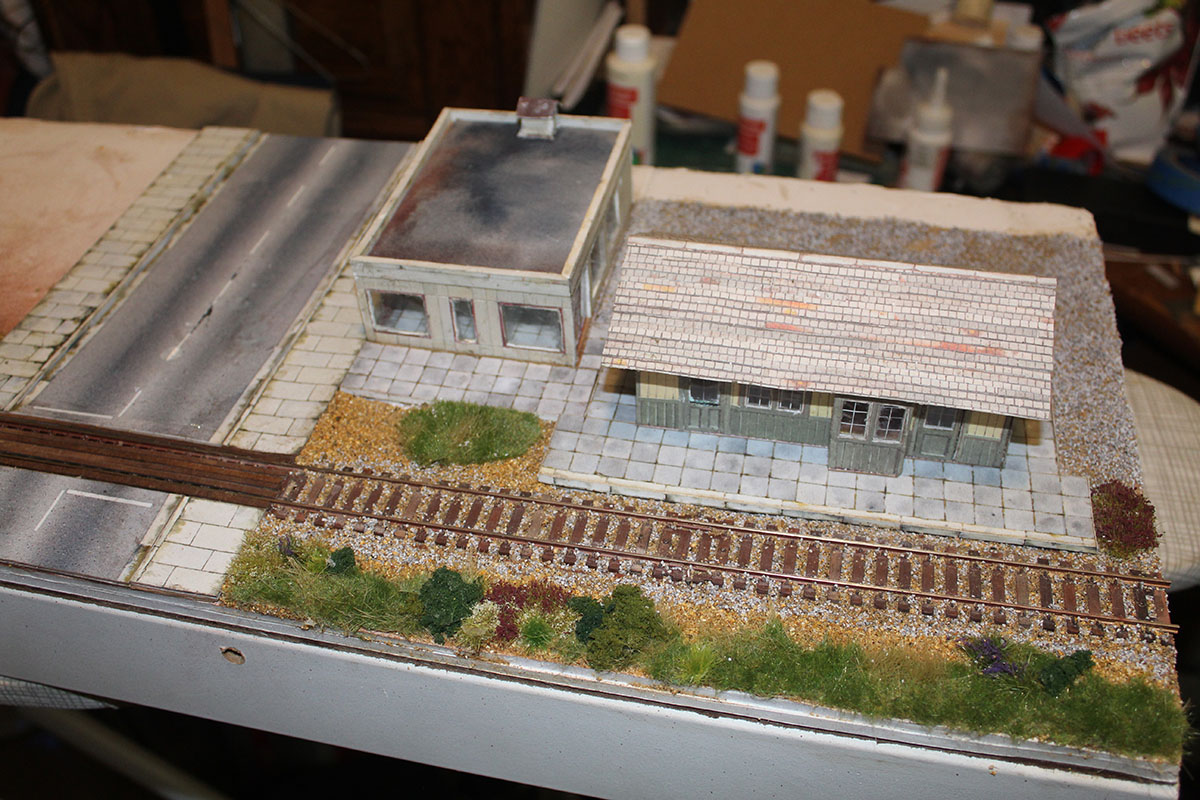 A huge thank you to John for sharing his inglenook layout – what a post, and what a project.

Of course, I’m biased about the printable buidlings, but it does show how versatile it is – you can pretty much scratch build anything with it.