“Hello all, from across the Big Pond It’s Jim Volmer Sr. with an new update on my dream layout.

I have finally decided to name the new layout after my best friend. Her name is Starr and she is now eleven years old. Not my child, my children are all grown. NO Starr is my Doberman. Starr is my sweetheart, very loving, and highly protective of me. When my ex-wife would go off and get stupid acting toward me, Starr would go in front of me and sit there, just waiting for her to do something really stupid. Thank goodness, my ex-wife would back down. So since she is my loving companion I thought the best way to remember her would be to name the layout after her, and therefore the railroad will be called STARR POINT, and no, Starr does not know how to point.

Ok now onto the update. The following pictures are of the MOUNTAIN. In the last update I showed the beginning of the mountain shape with the cardboard strips being used. So here is that last picture once again. 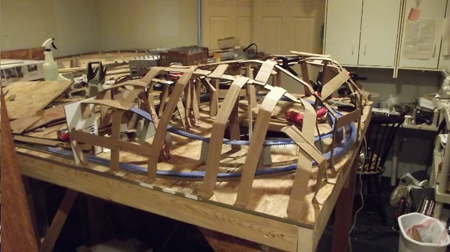 The picture does not tell the mere size of the mountain. It measures 4 feet 3 inches from north side to the south side, 2 feet 5 inches deep and 18 inches high. Whew, that is a very big mountain. It contains three portals, and two sets of track, one set that climbs up through the inside of the mountain to the 6 foot bridge that leads to the reverse loop and cargo terminal. The lower track runs through the mountain from the south portal to the north portal, exists and runs along the river that sits in the front of the mountain. 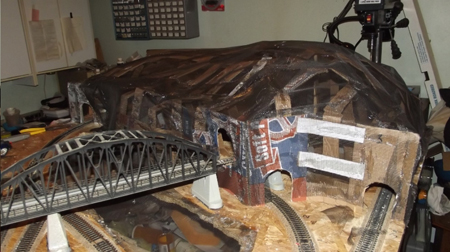 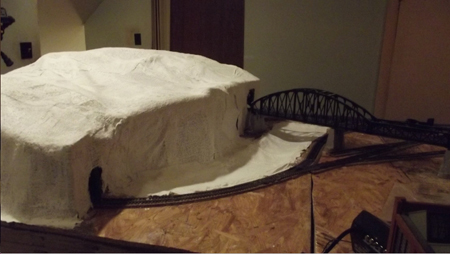 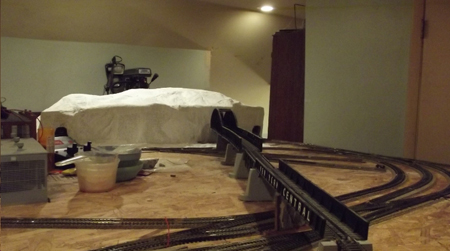 This picture is looking back 6 feet ( the distance from the mountain to the end of the bridge area ) toward the mountain.
For the portals of the mountain entrances, I decided to use rock ‘ out cropping ‘ from the old mountain. When I dismantled the old layout, I saved most of the rock out cropping to use on the new layout. I still have to make some to replace the ones I could not save, but that is okay.

The first picture is of the North Lower Portal with the rocks installed. It took approximately 30 minutes to complete this opening. 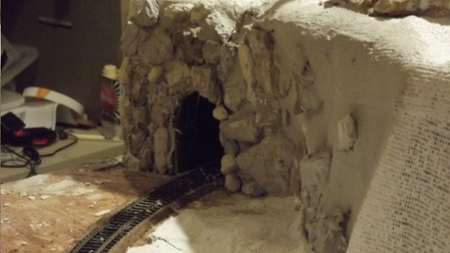 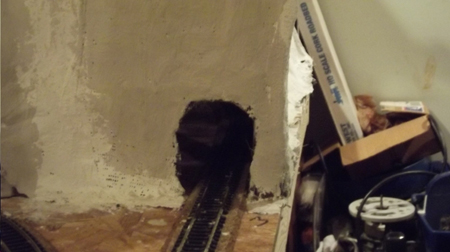 The picture above shows the South Lower Portal without the rocks installed. I wanted to show how dramatically the portals look once the rocks were installed and how they enhance the opening appearance. 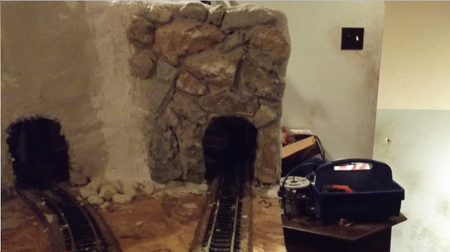 And here you can see the dramatic difference the rocks once installed make the opening stand out so much more. There are many, many other options available for tunnel portals. Since this is a mountain area, what better material to use than rock ‘out cropping’s ‘ made using HYDROCAL. As you will notice the ‘PORTAL ENTRANCE’ that takes the train(s) to the upper level is not completed here. It will be completed shortly and included in the next update.

On the top of the mountain will be trees, lots and lots of trees, along with a HO Lionel operating Radar Tower and some out buildings in “N” scale for ‘force perspective’ It should look pretty neat once it is fully completed.

The ‘river’ area in front of the mountain shown below will include people fishing both on land and from a boat. 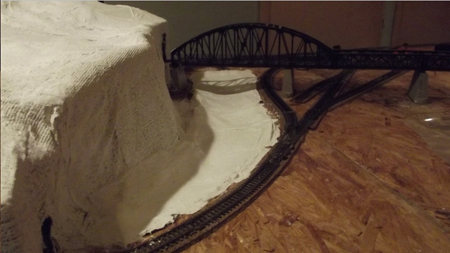 I am also going to include HO ROCK CLIMBERS for the mountain. I think it would be neat to have rock climbers climbing to the top of the mountain.

Well that is all for now. In the next update I will be showing the COMPLETED MOUNTAIN less the climbers for now the river completed less the men fishing, HO PROGRAMABLE TURNTABLE, and HOLDING TRACKS FOR THE ENGINES plus much more.

When I started the Railway In My Wardrobe, I was a complete novice and not interested in scenery. So I got a standard Hornby power rail. However, when I started adding scenery, the bulky power rail became more and more of an eyesore. I don’t have room to put a building over it. And I can’t change it out for soldered connections without dismantling the entire layout!

However, with a bit of signage on the front and some greenery on top, it becomes a raised flower-bed with marigolds. Well, almost!

Thanks for all the news, grand job you’re doing! 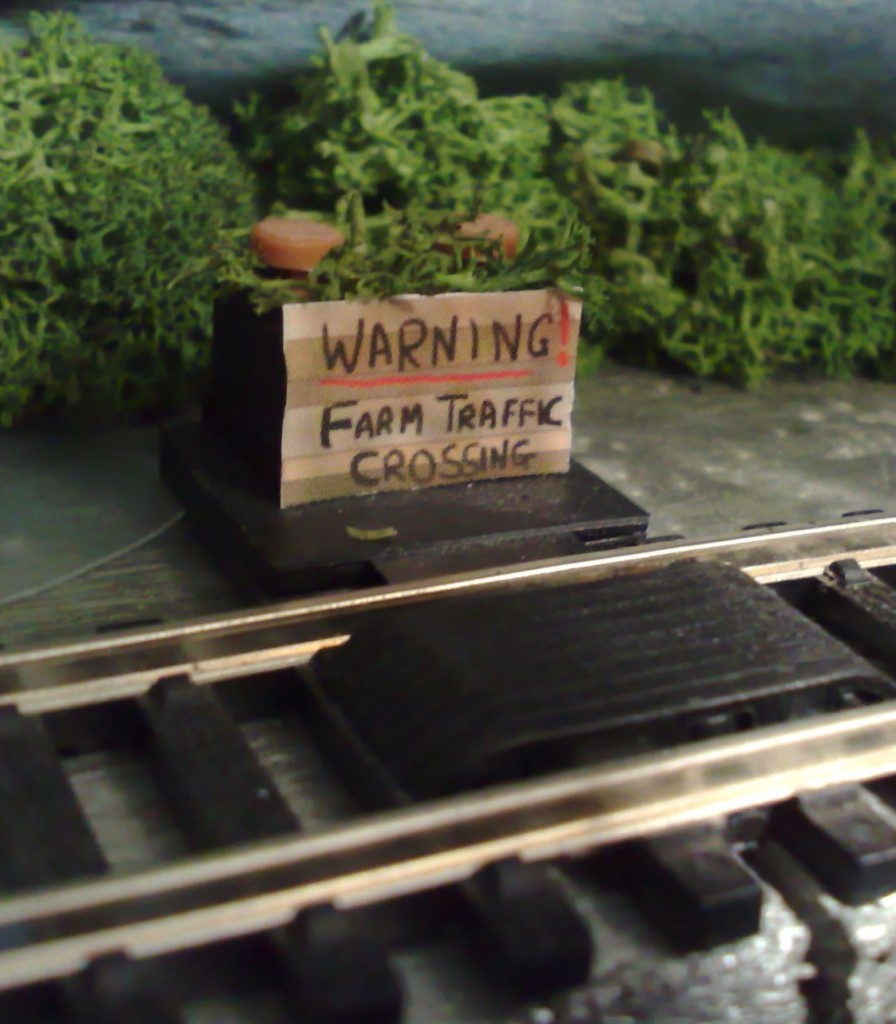 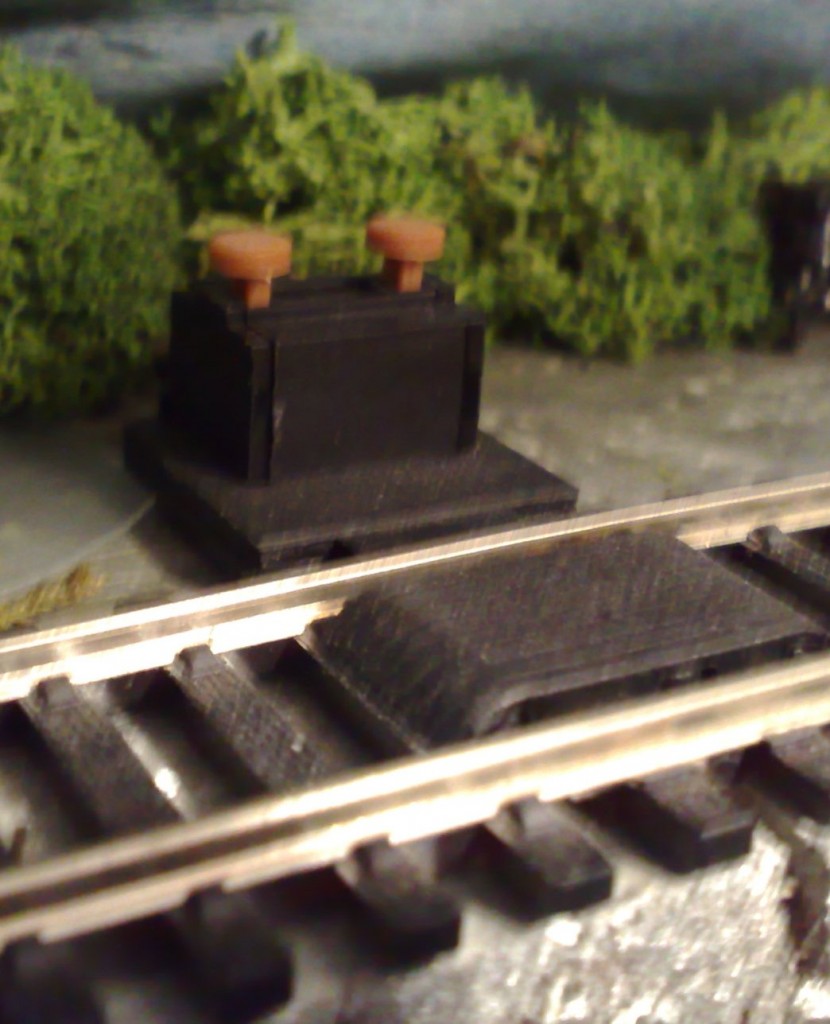 I would like to take this opportunity in thanking your wonderful readers for their nice comments regarding my “Byodo-In 360” project.

I, again embarked on another “intimate layout” project with the challenge of placing more tracks for a longer run time – but in a limited space. With a footprint of 19″ x 55″, I thought that the only way to go was up to achieve the challenge thus the mountain layout was conceptualize.

Being a member of JNS forum modeling Japan railways, I have always been inspired by the “Hakone-Tozan Railway” – a real mountain railway in Japan utilizing specialized trains to handle the very steep inclines and tight turning radiuses of the railway. While my project is nowhere near prototypical, I did adopt steep inclines and tight radius tracks (R-150mm / 6″). Height of the top tracks is at 14″.

Both Tomix and Modemo brands offer Hakone-Tozan themed trains, so they were perfect to use for this layout.

The whole layout is made out of 1″ thick white styrofoam and was brushed on with “styro-skin” for stiffness. Ground was painted with brown flat wall enamel before applying the foliage clusters. The layout has an open back and open sides for cleaning and maintenance of tracks.

In addition, both mountain tops are easily removable by pulling up to reveal the tracks that are inside the mountain – again for cleaning, maintenance or derailments.

Obviously, there’s still lots more to add like vehicular roadway, people, various grass blends, etc. so this project is far from being done. And While I initially began this project as purely experimental, it certainly has been a very enjoyable experience thruout each process as well as a good learning tool to do on future layouts.

I am enclosing 3 pics for your perusal as well as a video.

Alastair you have done a great service towards our hobby and I wish you the very best! 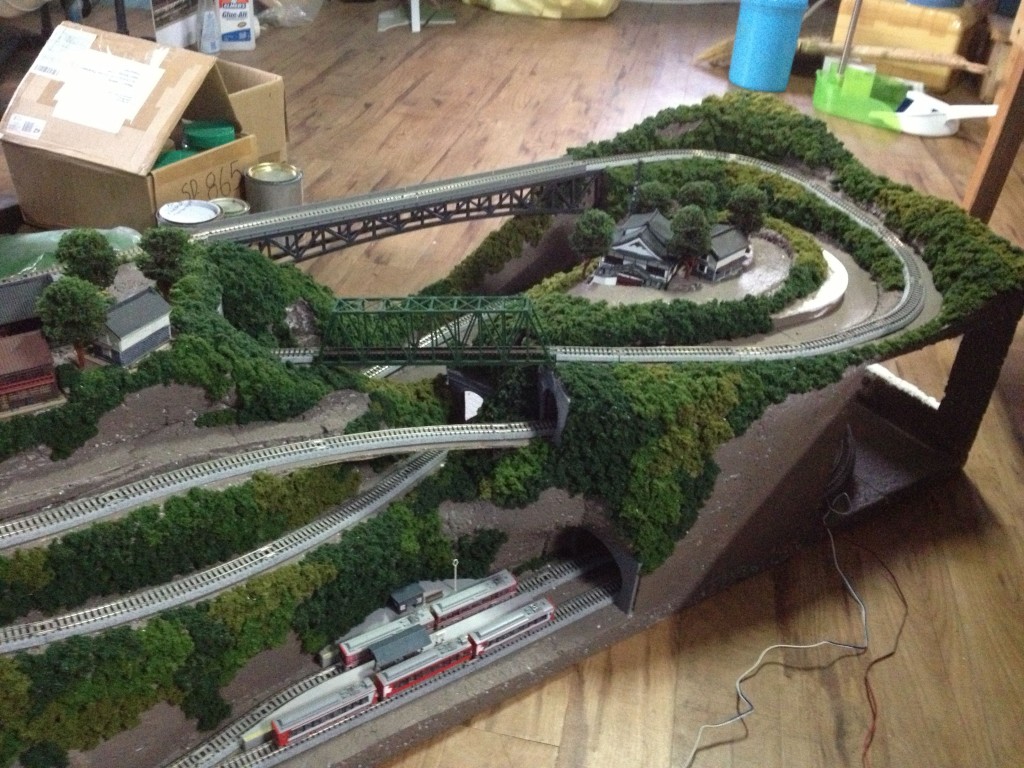 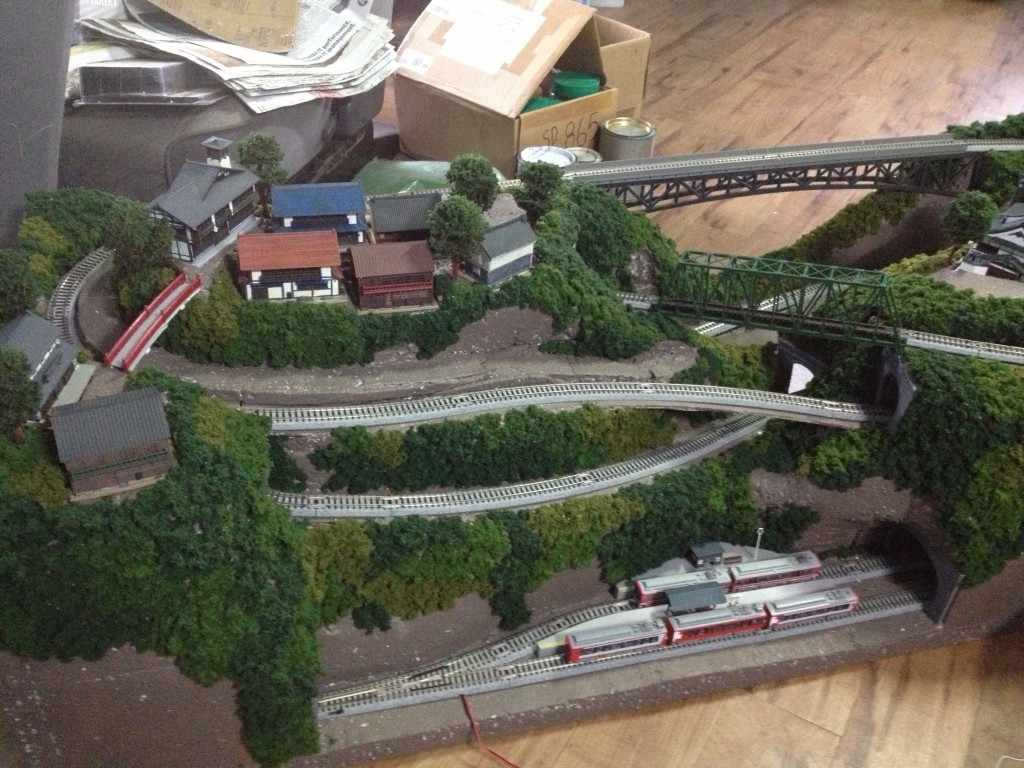 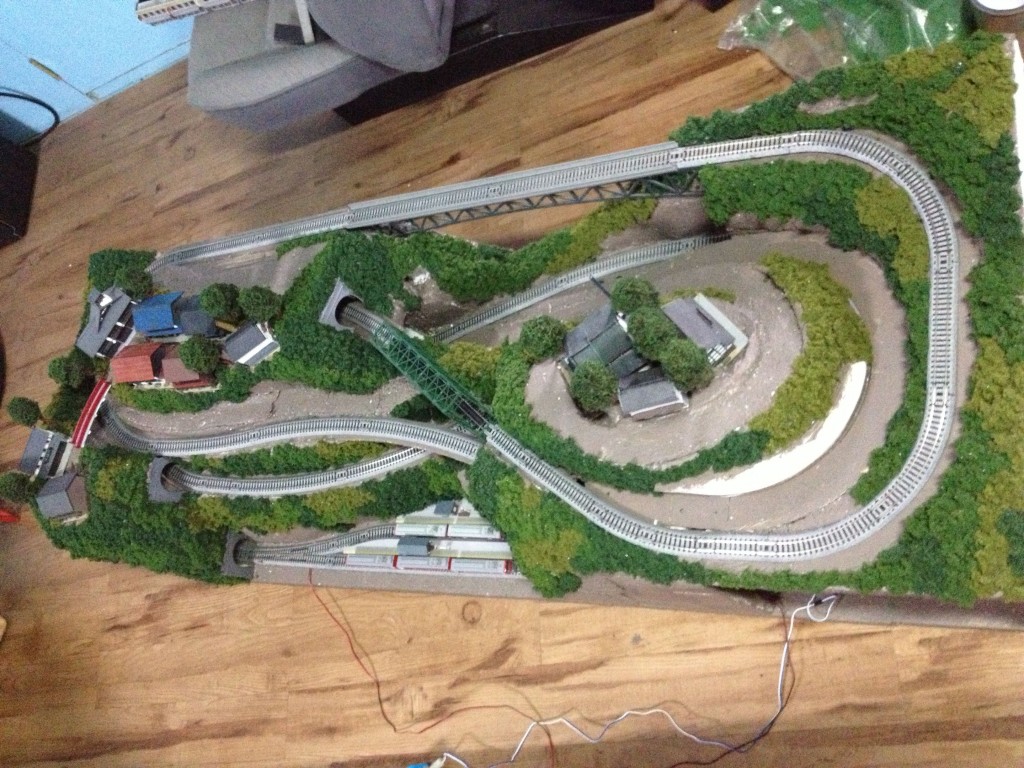 Big thanks to everyone who contributed – hope you enjoyed this post as much as me.

That’s all for this missive my friends.