“You asked for more standard gauge material. As I build one of these layouts a year for the club’s annual show, I have numerous photos.

The last set was of a layout which has been under construction for some time. It is permanent and thus is constructed with care and attention to detail.

The following photographs are of layout building at the extreme opposite. The club display is built each year starting with blank tables in three weeks.

In that time we must build a display which is worth seeing and which works. Thus, we use the quick and dirty method. We also try to limit the mess we will need to clean up after the show, thus, details like ballast are out.

Now, as I reported last time, a friend who collected antique Standard Gauge died last year. As he failed over the preceding few years, I knew that his collection would not long be available for the shows. I purchased replacements, but knock offs with more recent electronics. A shadow of the quality of the antiques, the only good feature is worm drive which keeps them from running away down hill.

Due to problems getting up hills during an earlier show I added two locomotives between shows to solve that problem, one a 39 lb. Lionel Brute.

One of these had been produced in the 1920’s but Joshua Lionel Cowen, the founder of the company, examining the prototype determined that a locomotive that heavy and big was not a toy. So the prototype sat in the show room in New York until it closed.

Now due to a market made up mostly of old men like me, this monster is being produced. It is roughly based upon The Milwaukee Road’s Class EP-2 bi-polar electric locomotives, the equivalent of rocket science in the mid 1920’s.

So the first two photos are of the first day of construction. The club members had unloaded the tables from trailers and set them up in a large L. This was to be shared half for Standard Gauge and half for subway models and O gauge tin plate.

My task was to build a loop around the short end of the L for one train to run and to build a dog bone, a single track between the three reverse loops at the bottom of the hill, holding tracks, thence up three levels to a top loop, for a second train.

A passenger terminal and city occupied the short end of the L and the mountain was to occupy the portion of the long end of the L allocated to Standard gauge.

The end result was two trains running at all times and others on display in the passenger terminal. Lighted ceramic buildings add are not to scale, but these are toys. Few if any notice any flaws. 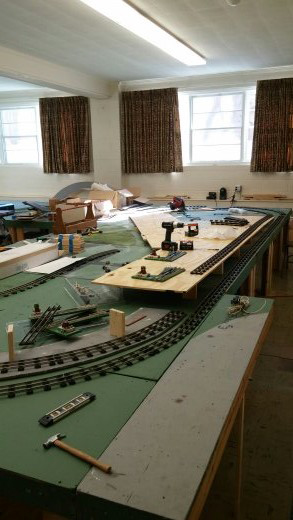 Day one a few hours after the tables were set up. The table work for the three lower loops is almost in place. The loops are on the table only at the extreme low end of the grade. The problem is to get high enough to clear at a point where the top of the rail is already two inches above the deck. That requires a serpentine route to add distance. 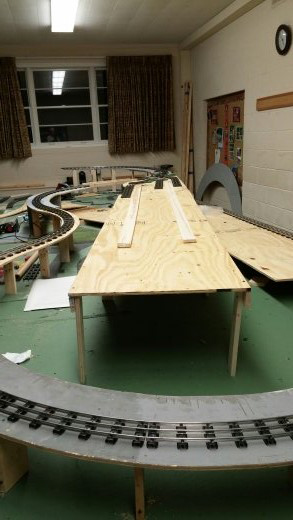 This this the end of the first day. The Serpentine line is in place and there is clearance for all but the extended pantograph of the Bruit. That was simply removed, no one noticed. 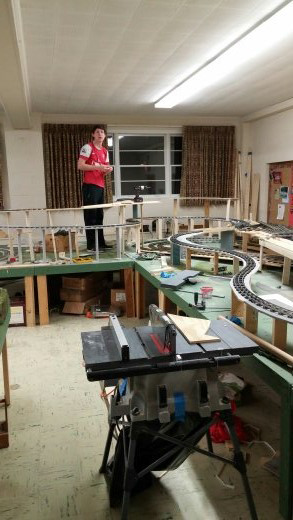 By the end of the first Monday, two long days and one evening the table work had reached the third level with the track following close behind. From comparison with one of my assistants you get some idea of how high that is. You can see the three lower loops. He is standing by the incomplete table work for the upper loop. 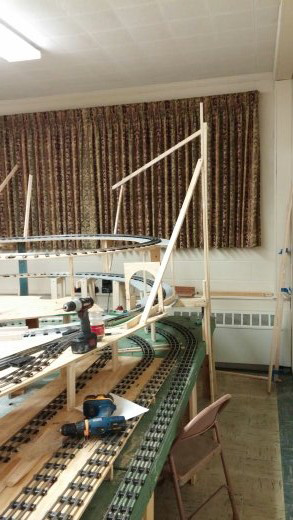 Toward the end of the first week, the track in place, the first structure of the scenery goes up. As you can see, this is cheap furring strips and 1x3s, dictated by the fact that this will all be in a dumpster within six weeks. 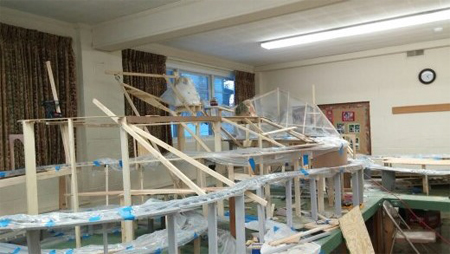 As I work full time, most of this was done weekends and at night, But each year I do take two days off to get this done on time. Here you can see the partially in placed frame for the mountain and at the far end window screening is already in place. The mountain’s terrane is made with good quality paper towels dipped in patching plaster, mixed to about the consistency of latex paint, laid over this window screening.

If a towel starts to slide down the hill, placing a dry towel on it connecting it to a stable piece above will stop the slide. Both techniques avoid landslides during construction. On a permanent layout there would be more structural support and several layers of plaster would be painted over the initial layer. The final layer would be much stiffer and is applied with a small towel which is also used to carve rock formations on cliffs and in cuts. Patching plaster is a must, plaster of Paris will set much too fast and a second layer would set nearly instantly. Plaster is dictated for a project of this size as it is cheap.

If we used products found in hobby shops the cost would be prohibitive. This display used about 90 lbs. of dry plaster. A permanent display this size would use three times that amount as the carved layer is made stiffer and thicker so it can be properly detailed. We are building in a church basement, thus I pour cheap white vinegar in the slop sink every hour or so to keep plaster residue from our buckets from clogging the plumbing. This is critical.

On this display I do not have time to detail the rock faces very much, thus I rely on paint and foliage to camouflage these sins. 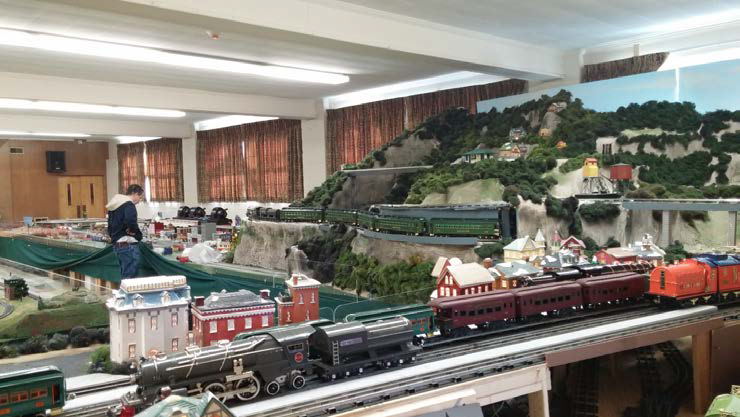 The last step of construction is putting a skirt on to hide the boxes and tools stored under the table. As can be seen the back of the terminal is open so the operators can access trains on the loops. The next day the crowds are to descend and the noise level in this room becomes similar to that of a factory floor. 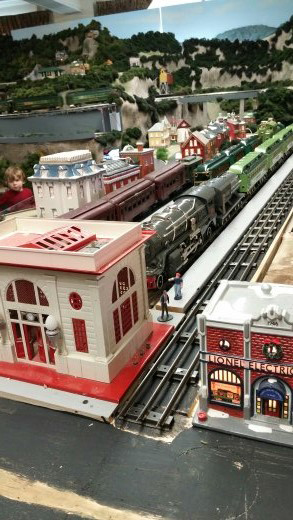 This is the terminal. The red train to the left is Ives and we believe the coaches were from before World War I. 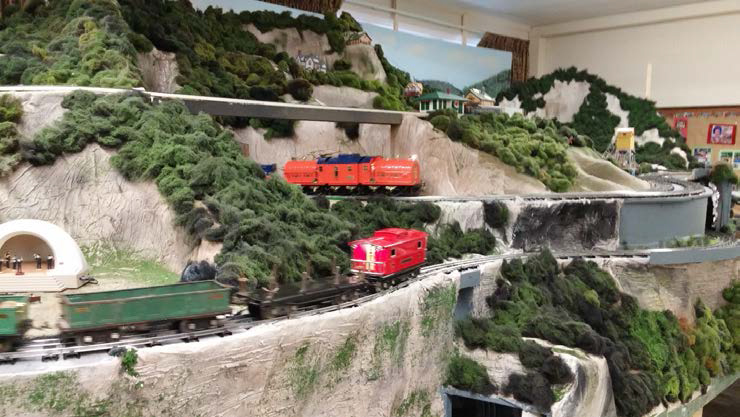 The Bruit on the hill. The locomotive is pulling a 17 car freight and is nearly over its own caboose. Train length is dictated by the capacity of the upper loop. This is a 3% grade all the way from the bottom loops to the yellow coaling station seen in the distance. As controlling speed is important we try to keep the grade constant. 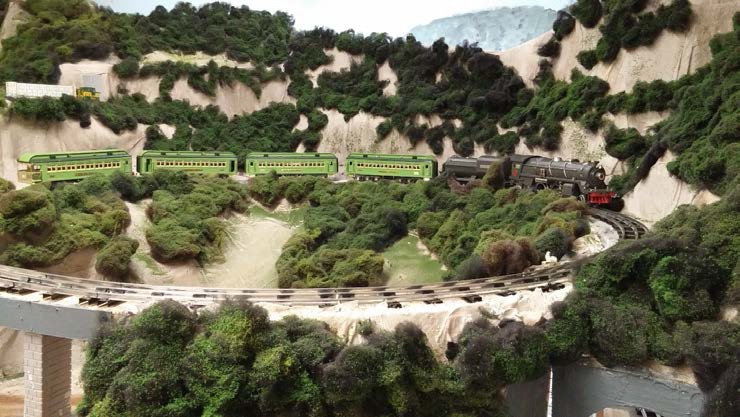 This is the upper loop. It is a bowl so the trains can be seen as much as possible.

We do not use smoke as it would quickly fill the room and this is February so opening the windows is only an option if desperately needed. For a public display we need to be mindful of possible respiratory issues.

The backdrop seen here is tied to the drapery system on the windows. We can only use such a backdrop here as club members must access the trains under the scenery from the real and this is the only place where we can place a backdrop behind their walk way. We cannot attach anything to the walls.

The display ran for three weekends. After the last train is shut down, we must vacate the room in one week. We save the track, the foliage the buildings and trains, but all the plaster, wood framing and screening goes in the dumpster.

This show attracted 2,015 visitors in those three weekends. We know of no other display anywhere where standard gauge trains climb quick and dirty mountains. And of course it is worth noting that two of the three young men who assisted in constructing this display normally confine themselves to N gauge. So for us N gauge guys this is probably the equivalent of going outside and screaming.

Thanks for your work Al and for your interest in this somewhat obscure aspect of the hobby which our club seeks to preserve as long as we can.

A big thanks to John. It was wonderful to read what goes on behind the scenes!

If it’s left you feeling inspired, have a look at the latest ebay cheat sheet.

PS Thanks to everyone who has mailed me on the beginners guide. if you haven’t taken the plunge yet, it’s here..