John’s been in touch with HO scale tram:

“I decided to renew my interest in model railroading, but take a new approach.

As a youngster, I had a HO layout which -if not necessarily very prototypical- kept me entertained and satisfied my MRR bug.

As an adult with young children, I and they became involved with G gauge, and had fun traveling to local shows with a portable display.

With the children gone and downsizing our home, the G layout went to a younger cousin and his family as our new home had little space for anything that large.

Time got me thinking hard about how I could make a layout using my beloved 1/24 or G scale, but with a much smaller footprint.

What I decided upon was a 1/24 scale miniature train set-up using HO track.

My layout would be a sort of amusement park ride, with 1/24 folks enjoying a ride-upon On-30 train.

At the same time, I decided to automate the trains, turnouts, and eventual special effects with DCC.

To make this vision happen, I purchased a small On-30 Spectrum DCC 0-4-2 Steam locomotive, three Spectrum open observation cars, and a pair of Spectrum short wooden gondola cars. All except the engine would require extensive modification.

First though, I had to prepare a layout table. What I decided upon may be a bit unusual, but so will the whole layout be!

I chose to frame the 4′ x 8′ layout with 1″ X 9” PVC lumber. The table surface itself is 3 layers glued up of rigid foam, presently covered in felt. The felt gives it a “finished look” while I build and will be removed as the work progresses.

For support, I purchased a set of folding “card table” legs, to which I added a set of easy-rolling casters for mobility.

You will note in the photo that the layout is in a covered, screened area. Here in Florida most have this, called a lanai.

Ours happens to be large enough for both my layout and my wife’s elevated gardens, with room left over for some chairs and small tables for entertaining.

Since the climate is humid, I keep a light plastic tarp over the entire table when I’m not using it. 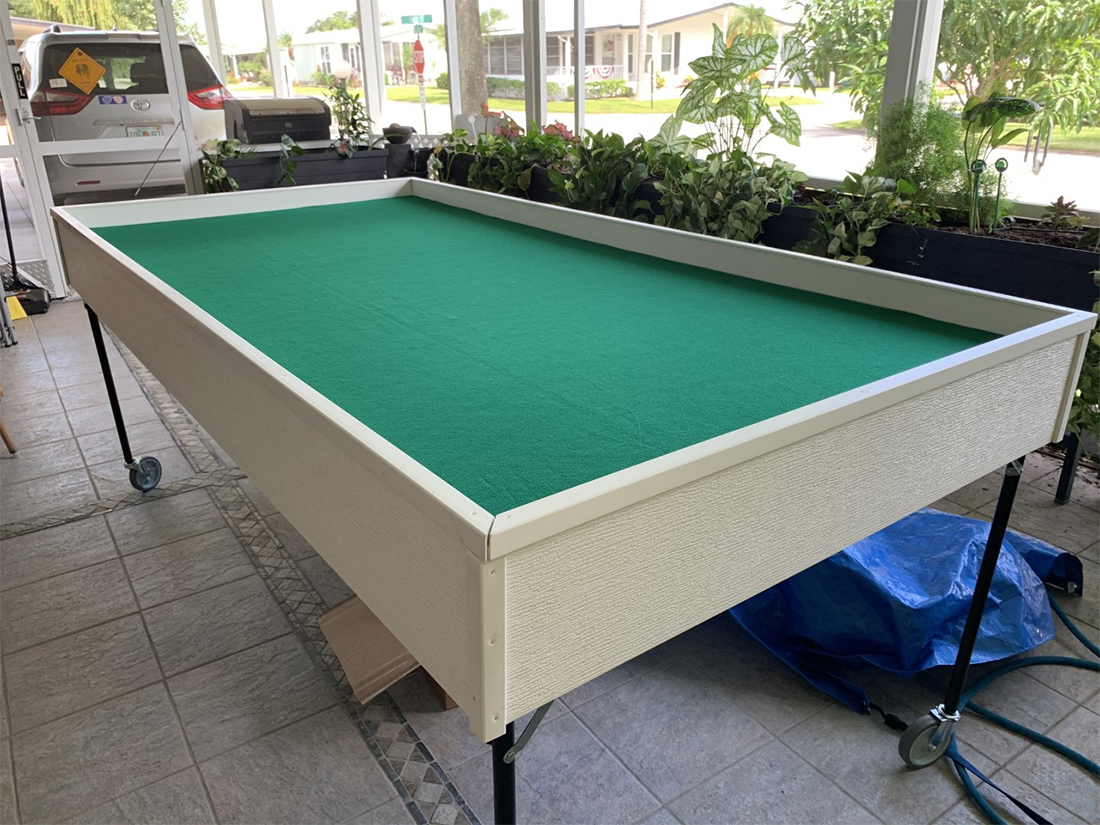 I decided to use Bachmann EZ Track for convenience since it was readily available and requires no tedious tracklaying. Not my interest at this point as my immediate goal is to be up and running with my HO scale tram.

I knew rolling stock would be a challenge for this rusty craftsman, but I had a pretty good idea what I wanted and how to achieve it. The Spectrum On-30 open observation cars were “more or less” in scale for O but needed heavy mods for 1/24 or G scale. The first thing was to remove the far too low roof from the observation cars. A razor saw made quick work of this. 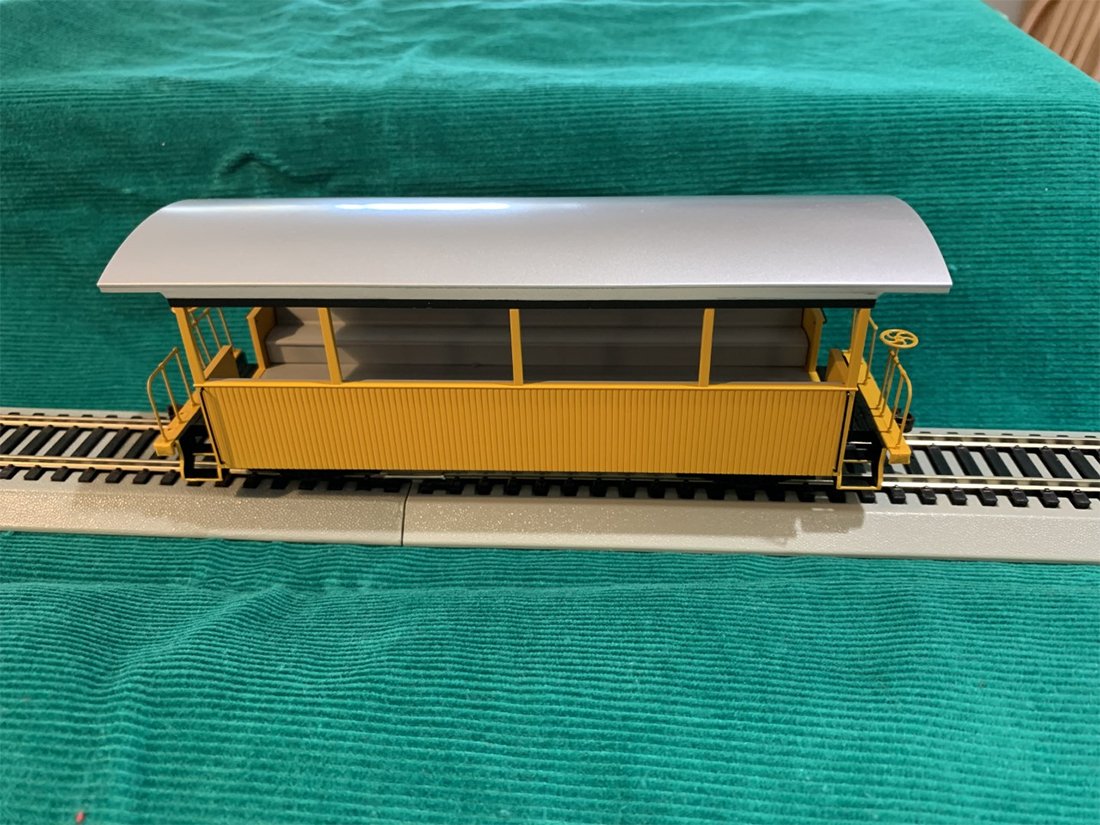 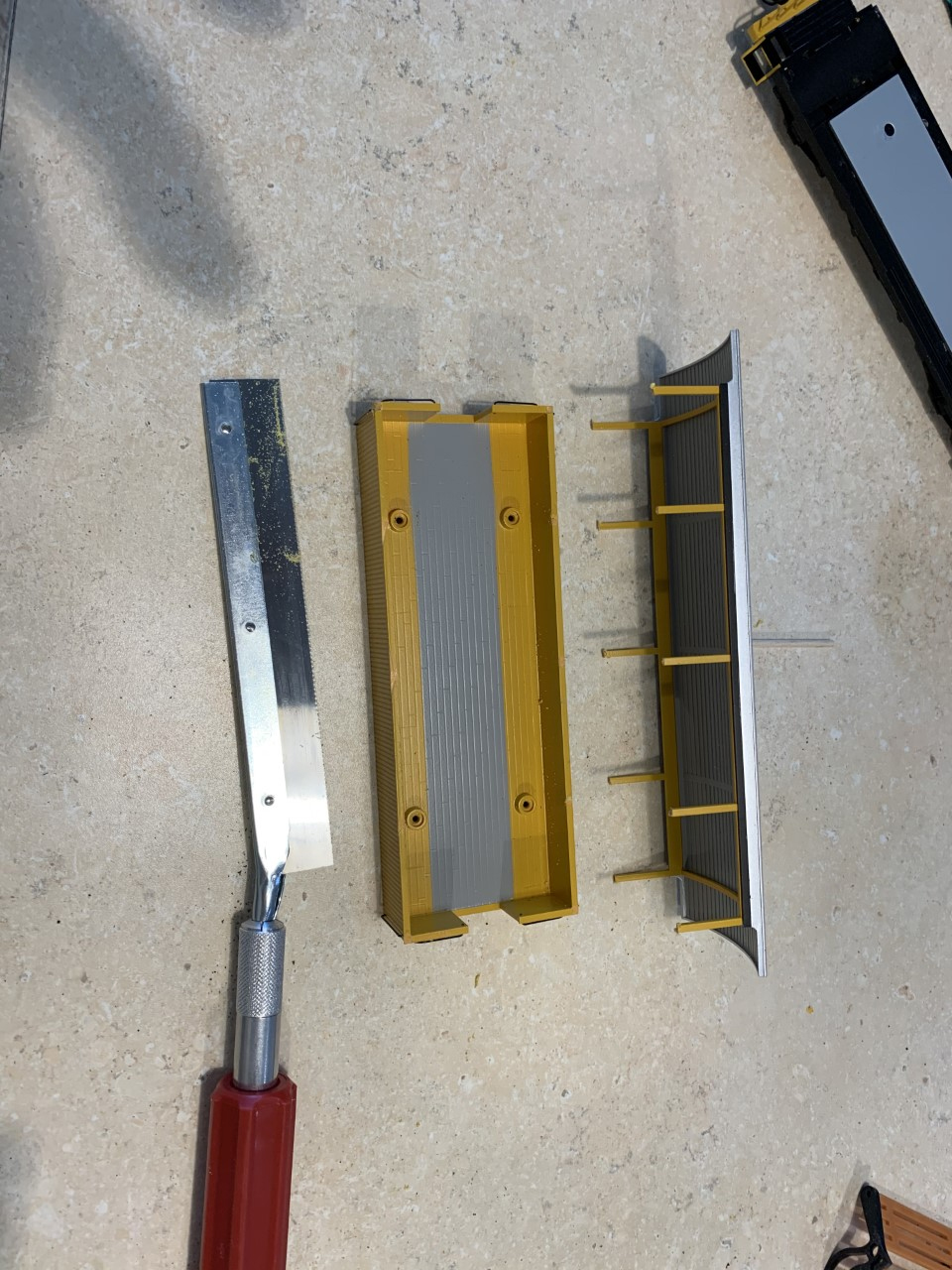 To remove the O scale interior benches, I removed one truck so I could access the tabs holding the coach body to the chassis. Once the body was removed, I removed 4 screws which held the benches in.

This left the body roofless and empty, so time to add some 1/24 seats!

I found some candidates for the job with 1/24 park benches. These just happened to fit across the width of the car perfectly! I sawed off most of the base a glued 3 benches in place on each car.

Benches glued in and new roof supports going in: 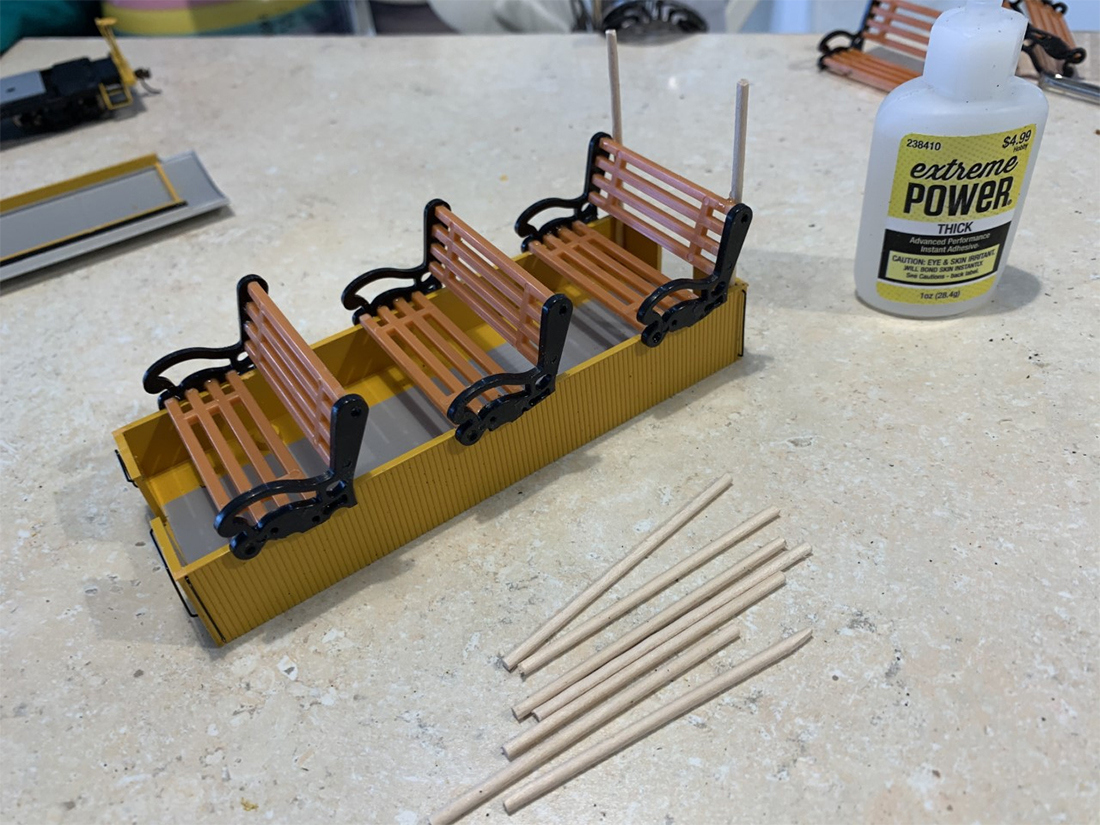 The new roof supports were next. Each was cut from wooden medical applicator sticks, 2.5″ long for each. Once 8 were in place, the roof went on and the chassis reconnected.

Two done, one to go. 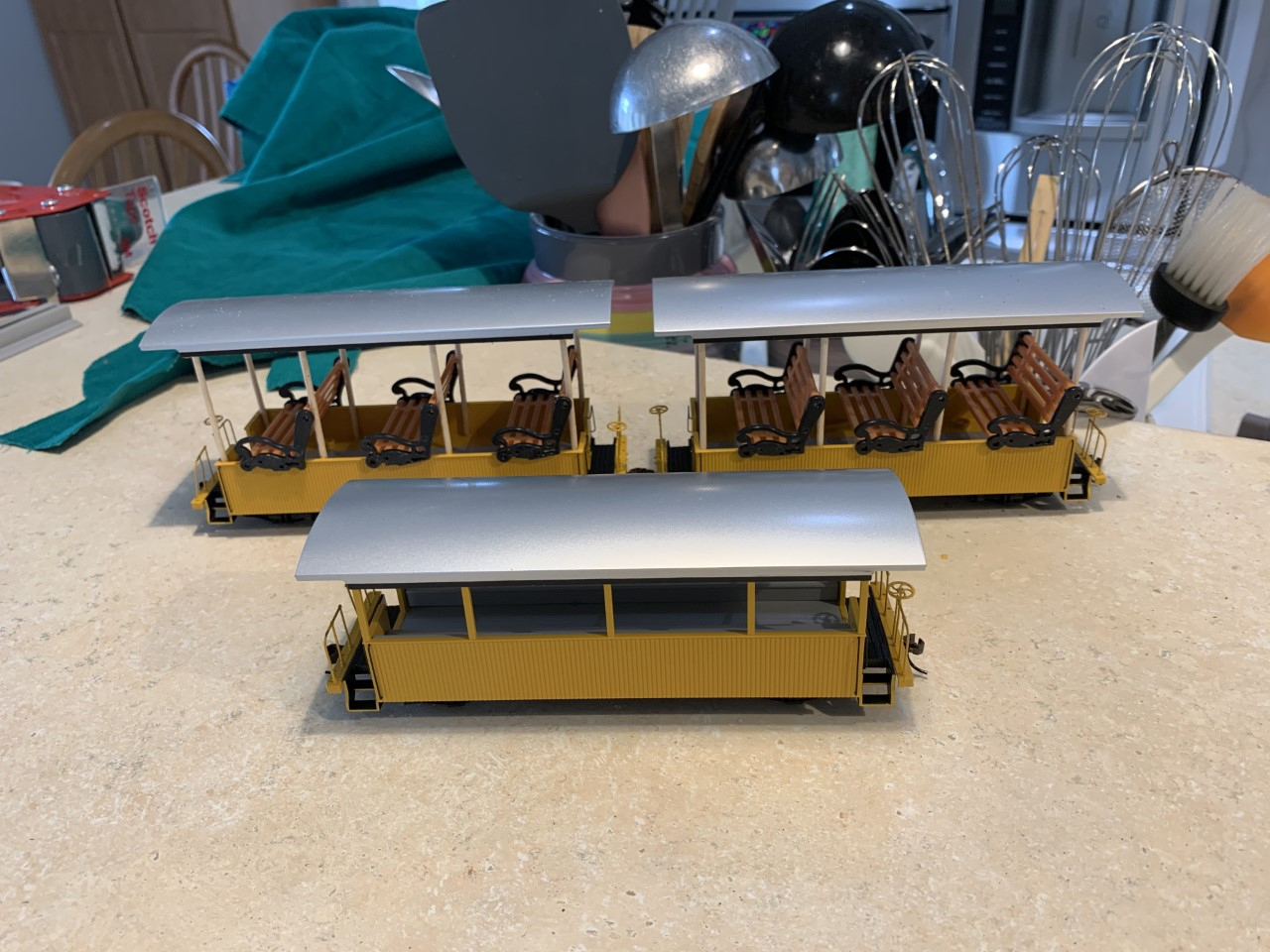 After completing the observation cars, I had to make a trailer for the driver. On the Howling Wolf RR, the engine is operated by a remote control on the driver’s lap, but where should he ride? A modified wood gondola served the purpose nicely. I’ll spare you the obvious steps, here it is… but lacking a roof! 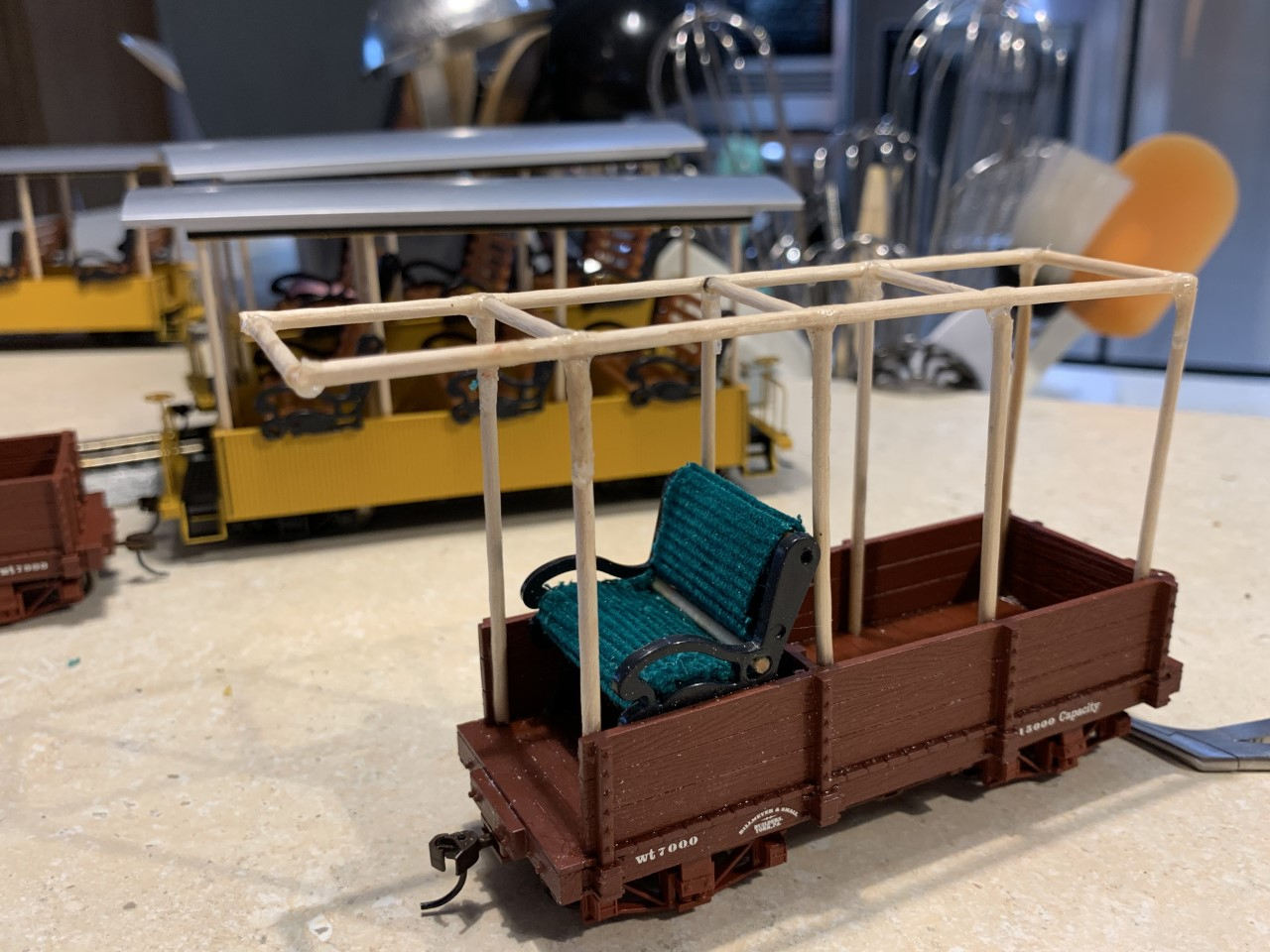 I gave some thought of how I would match up a built roof with the roofs of the obs. cars. Then an inspiration! We use a fiber product called Benefiber, and just maybe… Stay Tuned for the next instalment! 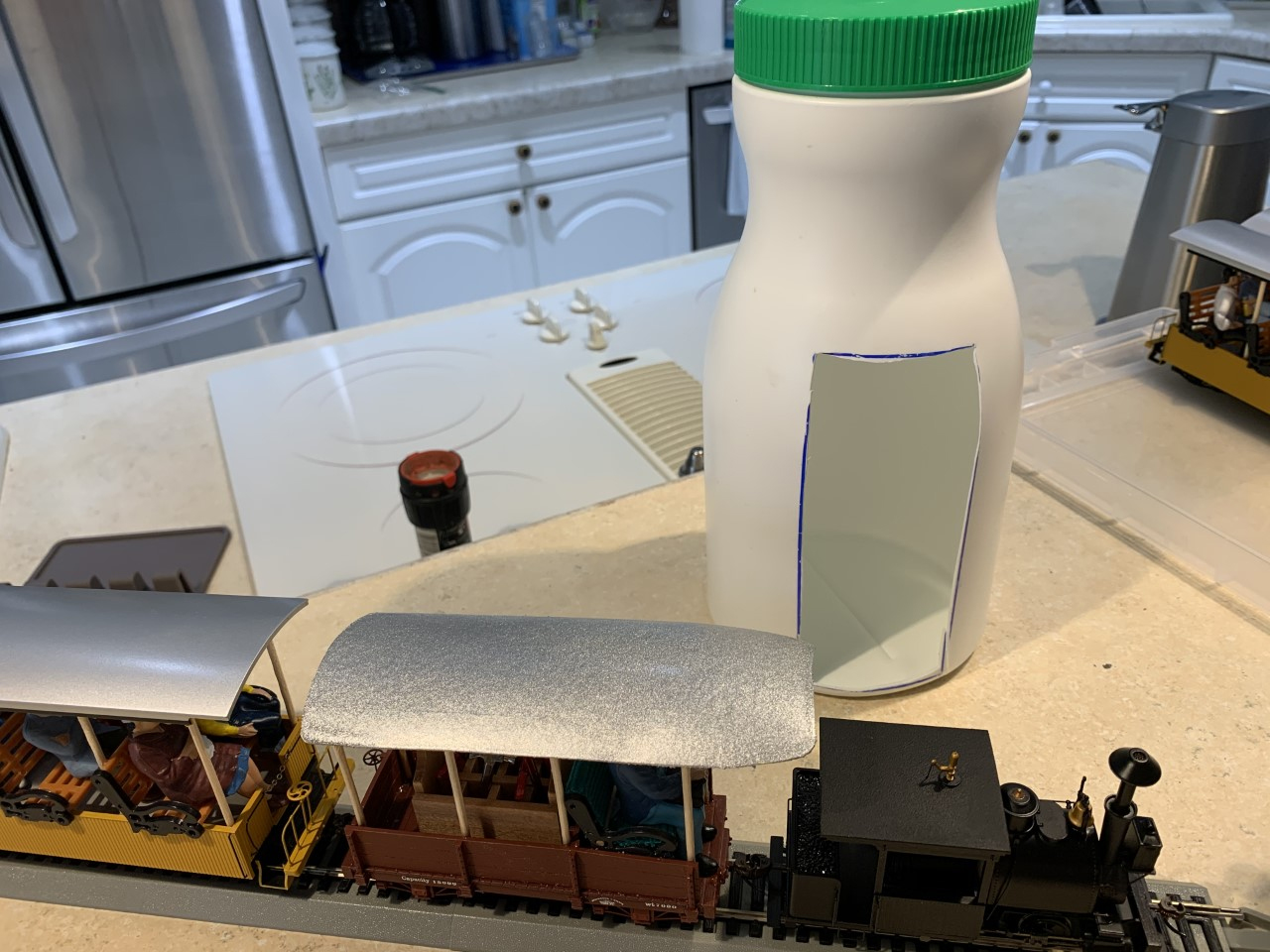 A huge thanks to John for sharing his HO Scale tram – some very creative scratch building going on there. Can’t wait to see the next update.