Like many things in life, my interest in model railroading started at a very young age. I built 14 different layouts over the years; this is number 14.

As I got further in life after college and getting settled in a career (Industrial Arts teacher) with a steady income, I began building more.

Problem was that after I got a layout built, I’d get transferred or changed jobs, it was a curse. It happened 13 time from my very first HO layout while in middle school.

The current layout was built with my planned retirement in mind. We had a hot tub on our back deck that quit working and it was not worth replacing so we took it out. That left a large open space to the side of the extended deck I built when the hot tub was there.

AS I looked at all the open space now, the extended deck had a three sided five-foot-high privacy fence. I saw if I extended the fence up another 3 feet, close off the front, put a roof on it, instant railroad room!

That’s what I did, closed it in, wired it, insulated it and added air-conditioning (a must have in Florida).

The inspiration came when my wife and I were in Colorado chasing trains and we found ourselves at the west portal of the Moffat Tunnel. We heard a roar in the valley and soon a 110-car coal drag with 3 Denver and Rio Grade SD50s on the front three in the middle, and two at the rear.

Soon the doors to the tunnel opened and the train roared by us at about 8 MPH. It was inspiring, so years later I decided to model the D&RG.

The layout is N-scale and free lanced, with an interchange with the Northern Pacific, no specific years modeled.

I have added a card system (Not in the pictures) for planned scheduled operation and car forwarding.

I use Digitrax DCC. It cost more in the beginning but it is the only way to go. Most of the engines have sound. I have been modeling N-scale since 1970, and some very early Micro-Trains cars are still in service.

I have 6 staging tracks behind the backdrops. I use mirrors in the corners to view the hidden tracks.

Scenery is carved foam with plaster cloth over the forms with rock castings.

I made many of the castings by pouring plaster into crumpled aluminum foil.

Edges of the forest was accomplished by taking strips of lichen and soaking and applying ground foam.

Still lots to do, but one step at a time.

I tried not to make the layout a bowl of spaghetti tracks and separate the scenes so you focus on one part at a time. The concept of less is more.

As it turns out, I retired but came back as a contractor with the school district to direct an Aerospace/Aviation program. I am a pilot and started a high school program 20 years ago.

The school district wanted to expand the program and wanted me to head it up. So, my railroading time is limited.

What is nice is that the room is tight and sealed, so I can close the door, run the dehumidifier and not worry about anything. It stays dry and clean. 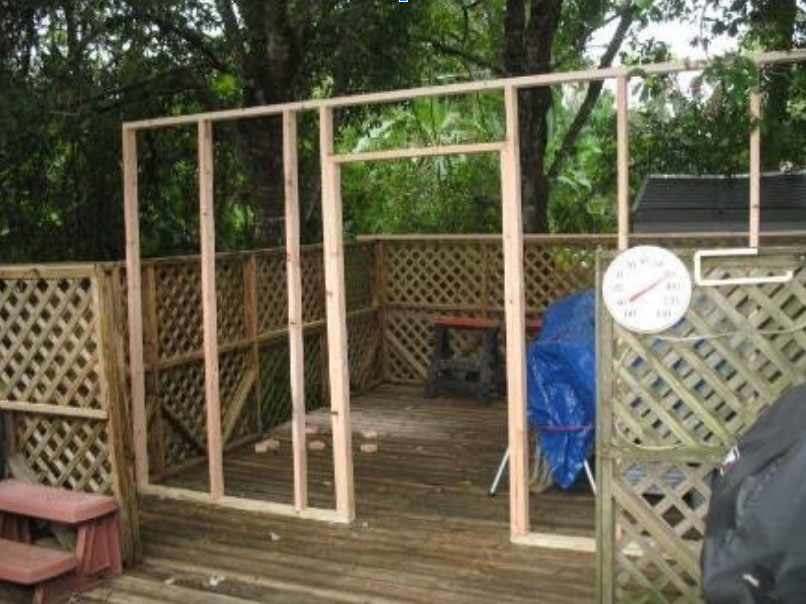 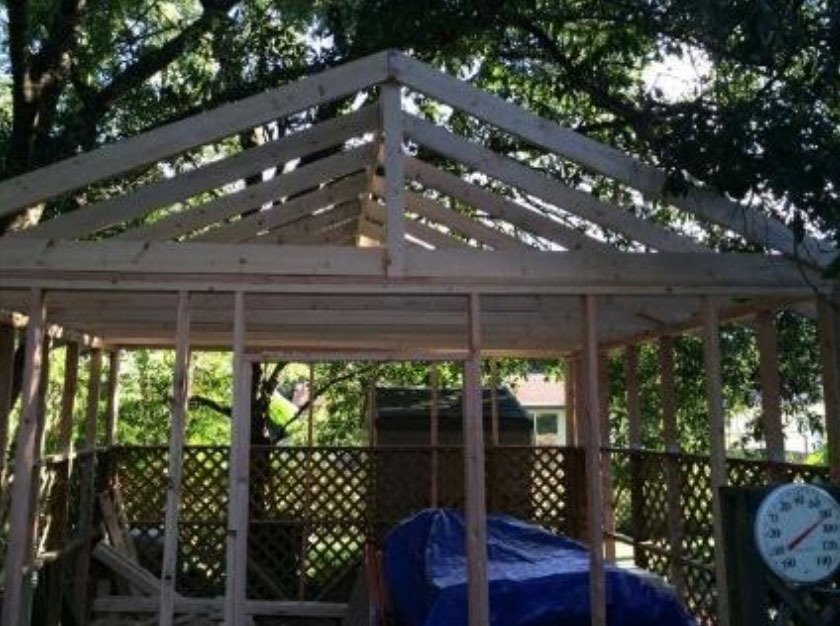 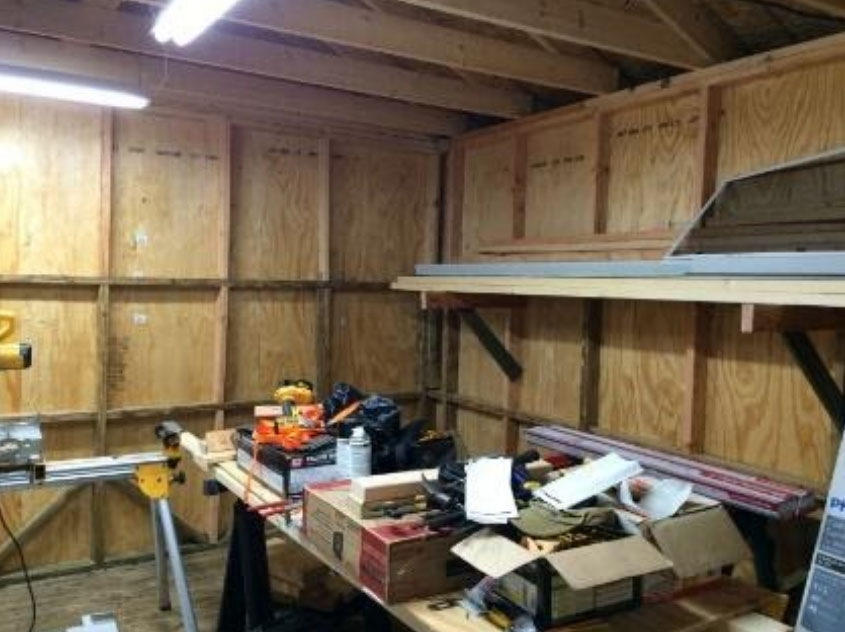 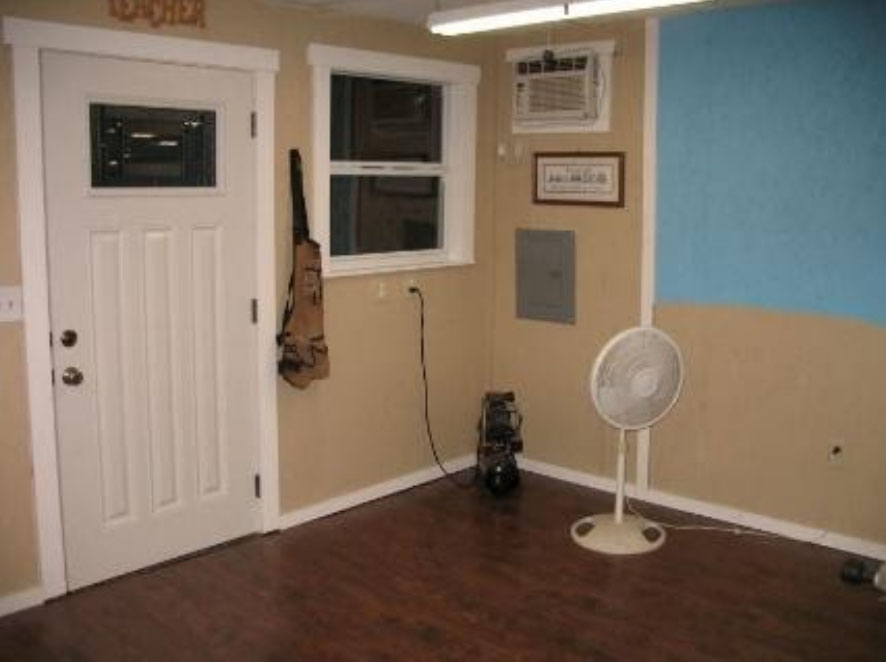 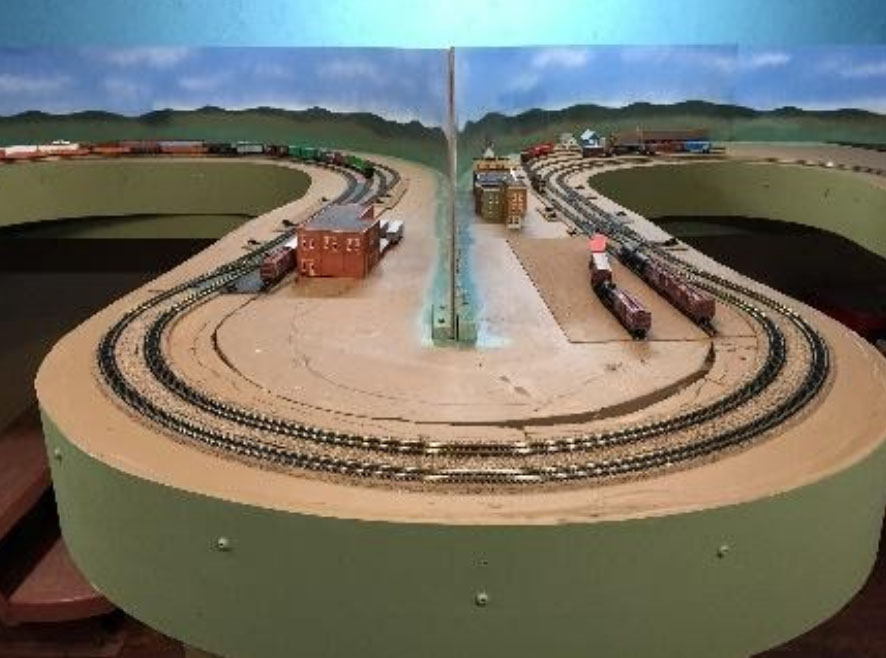 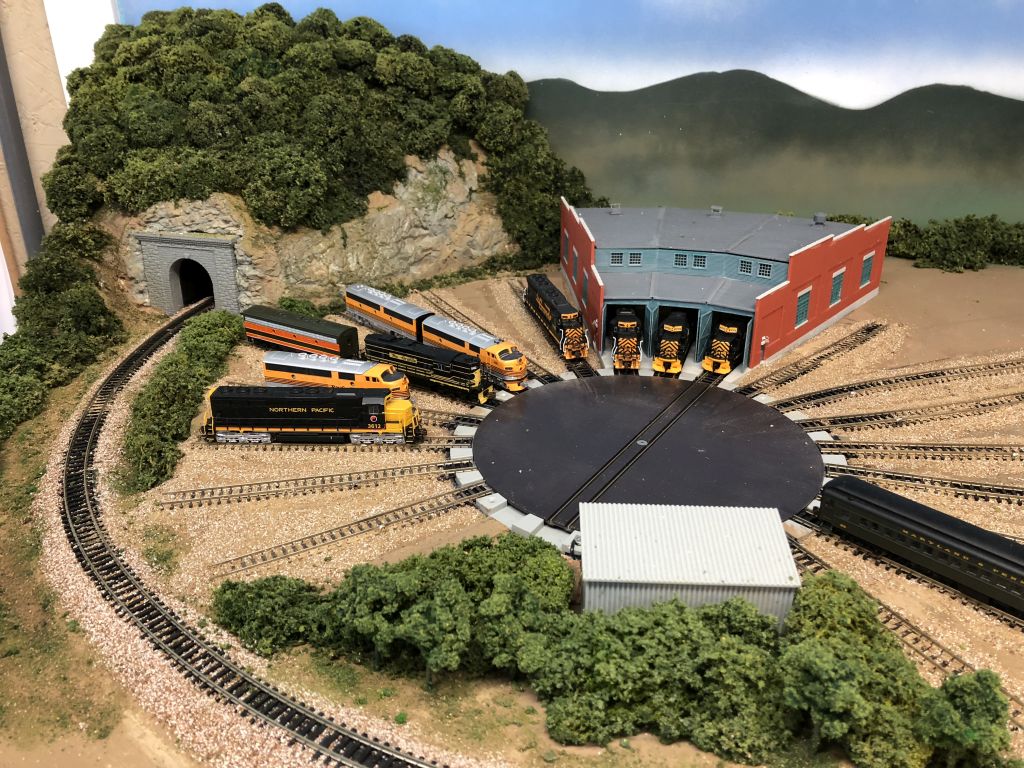 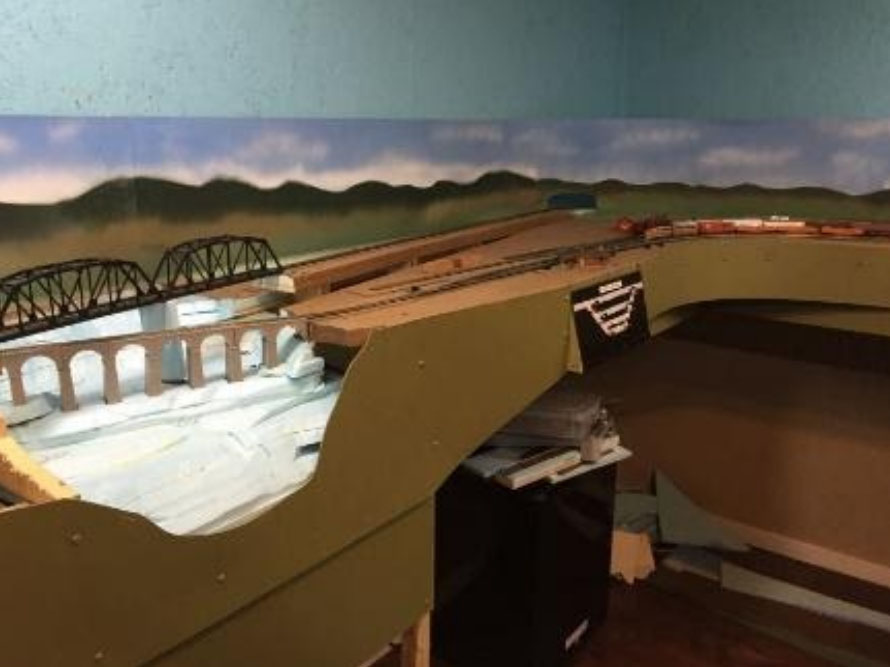 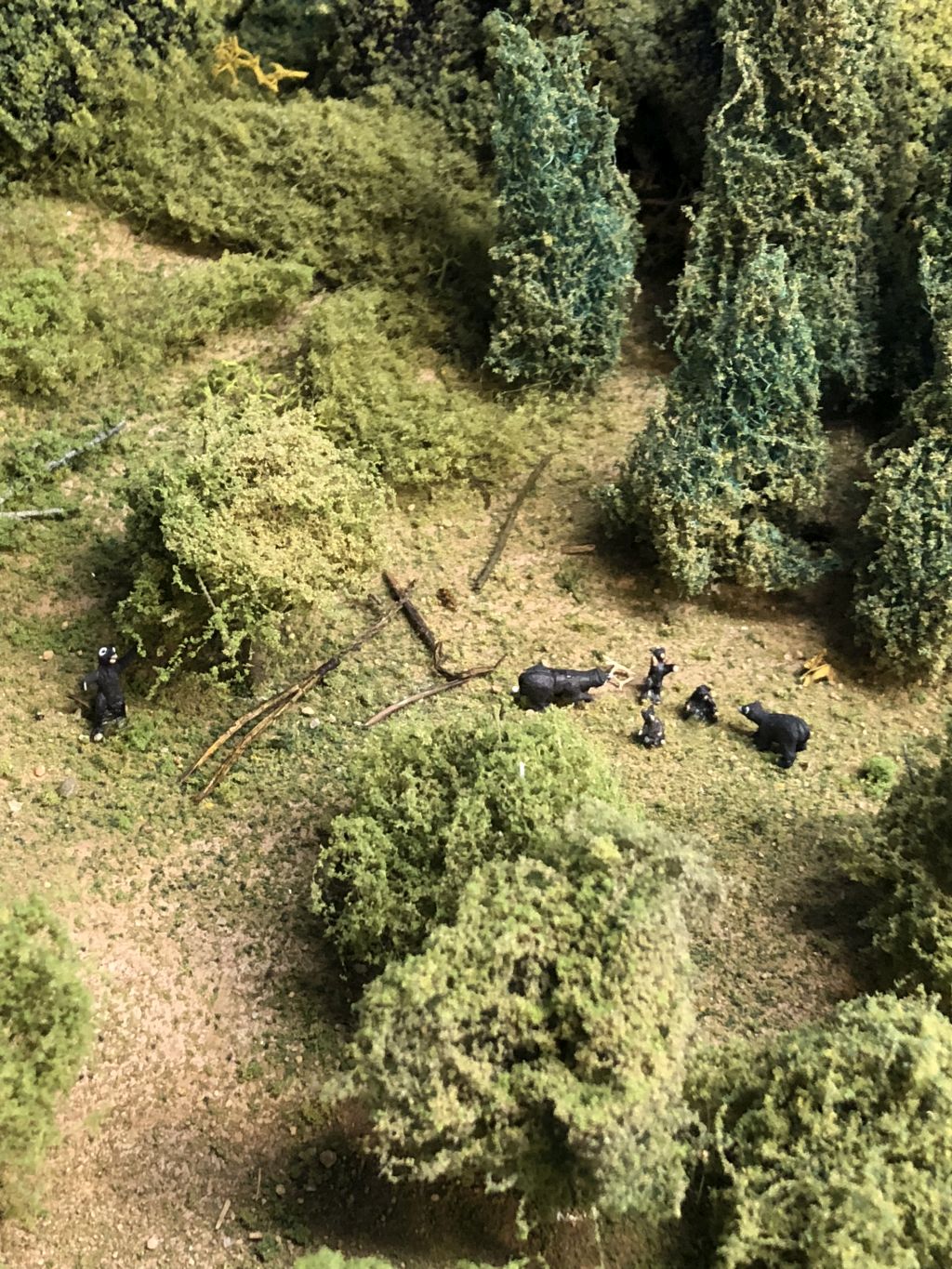 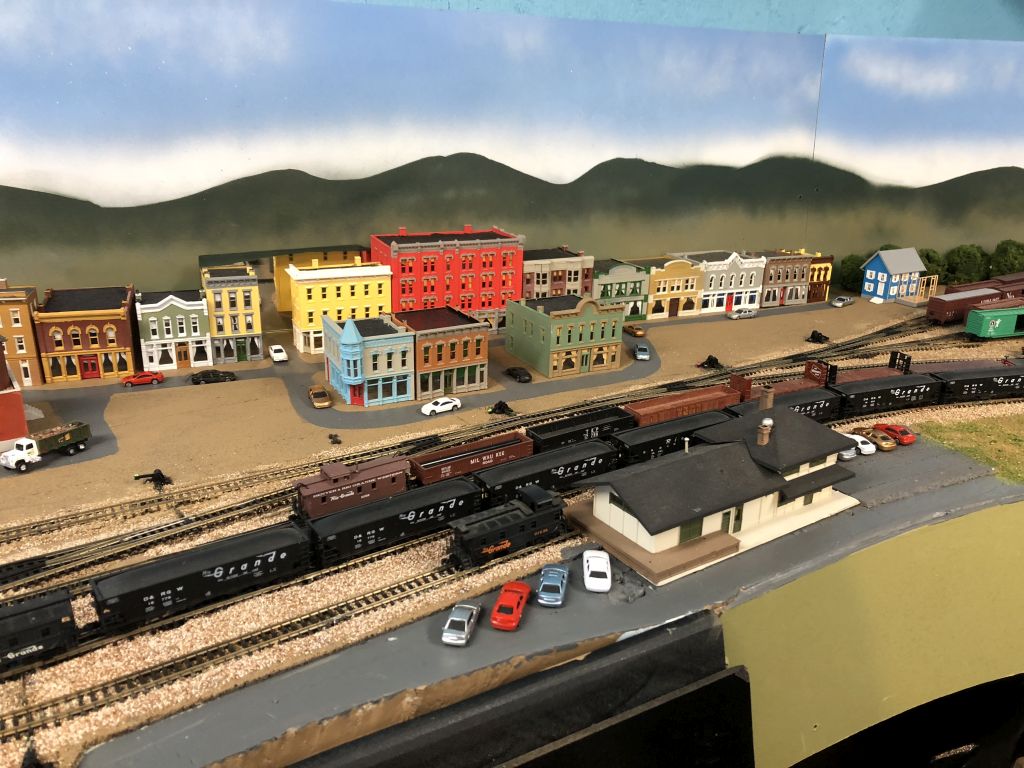 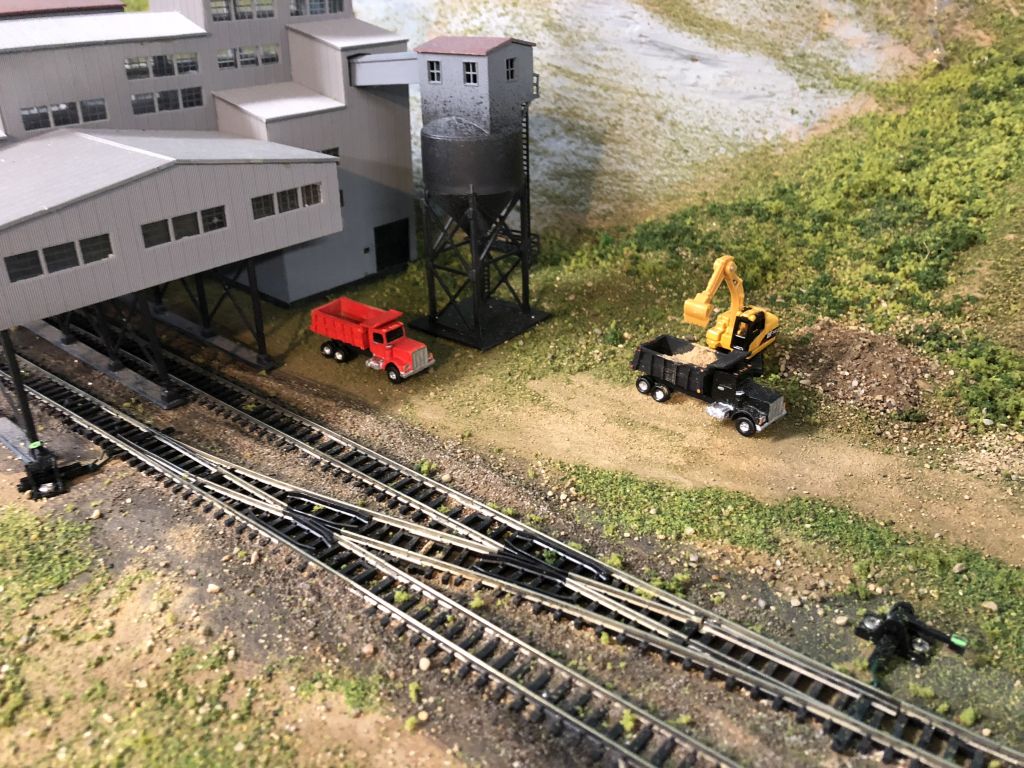 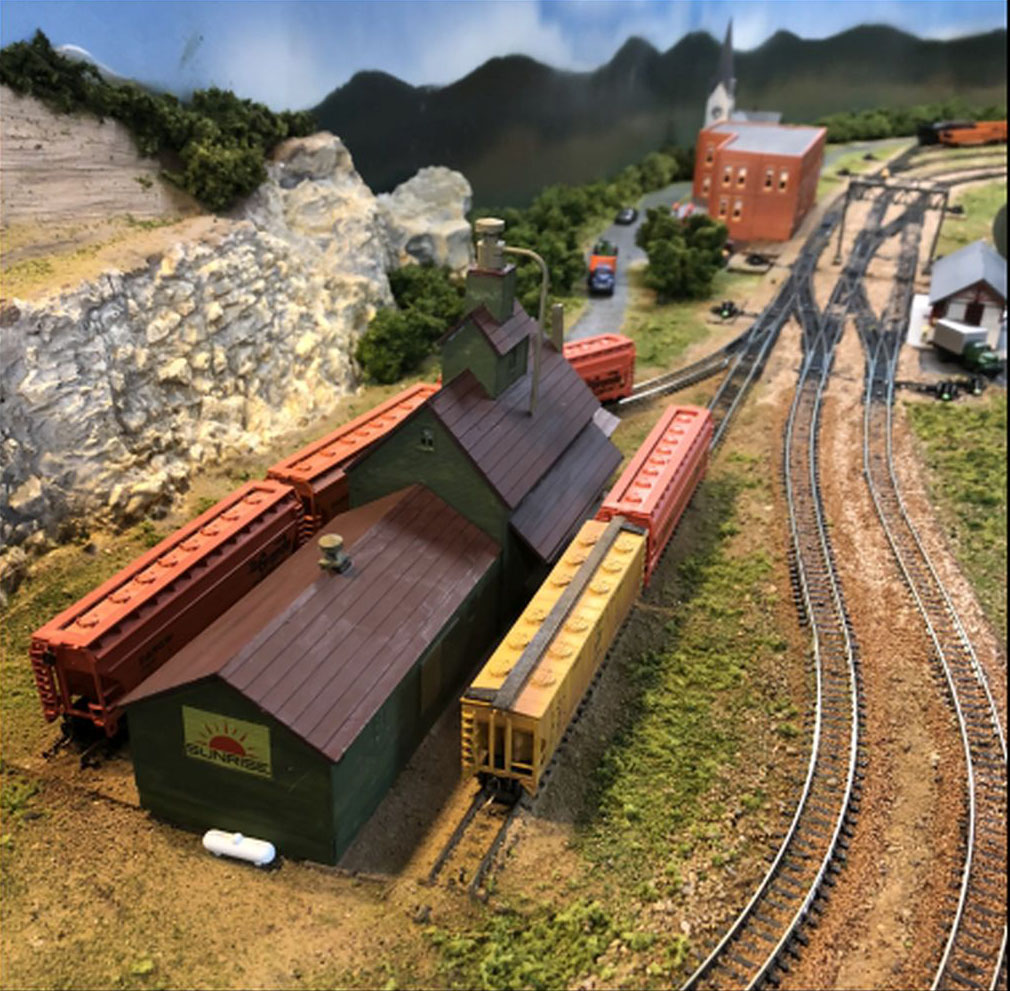 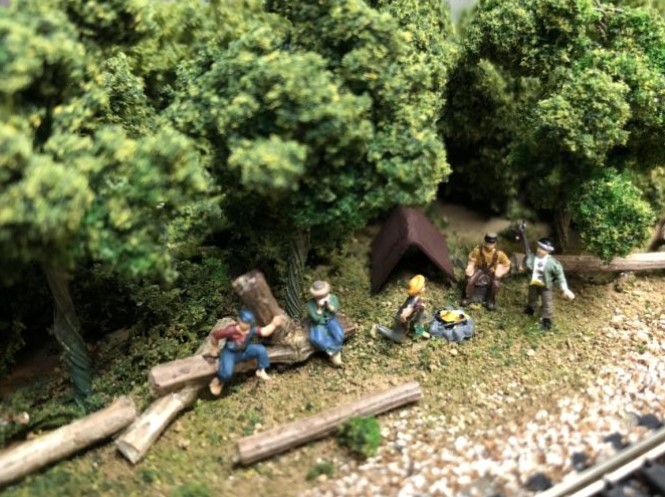 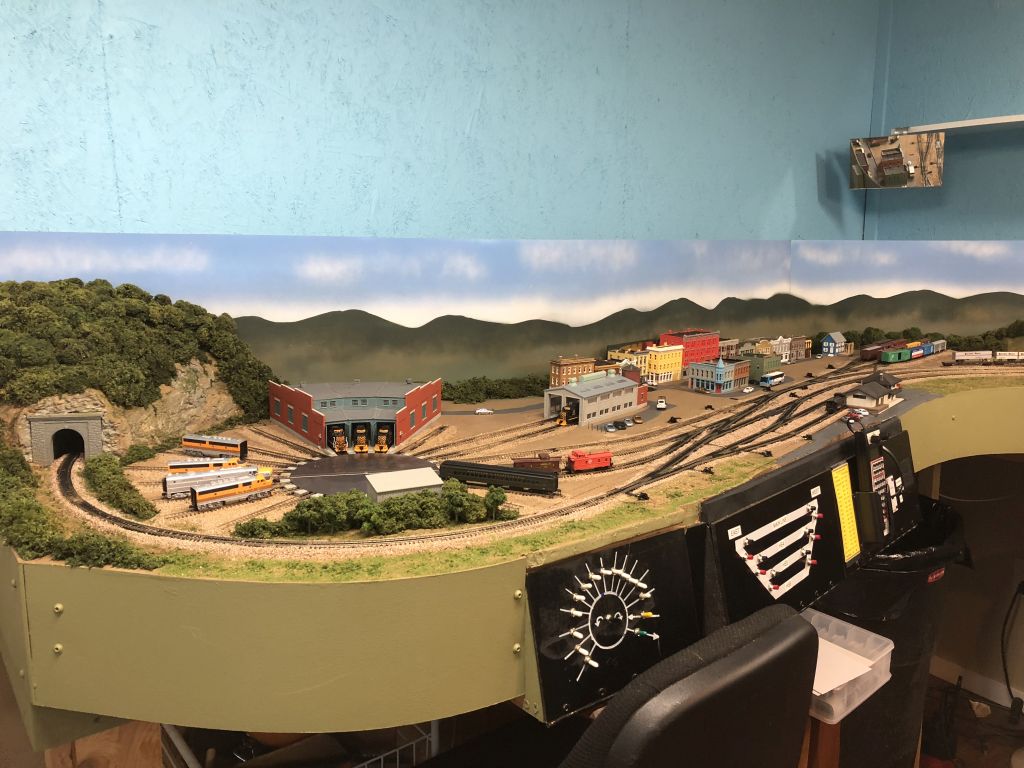 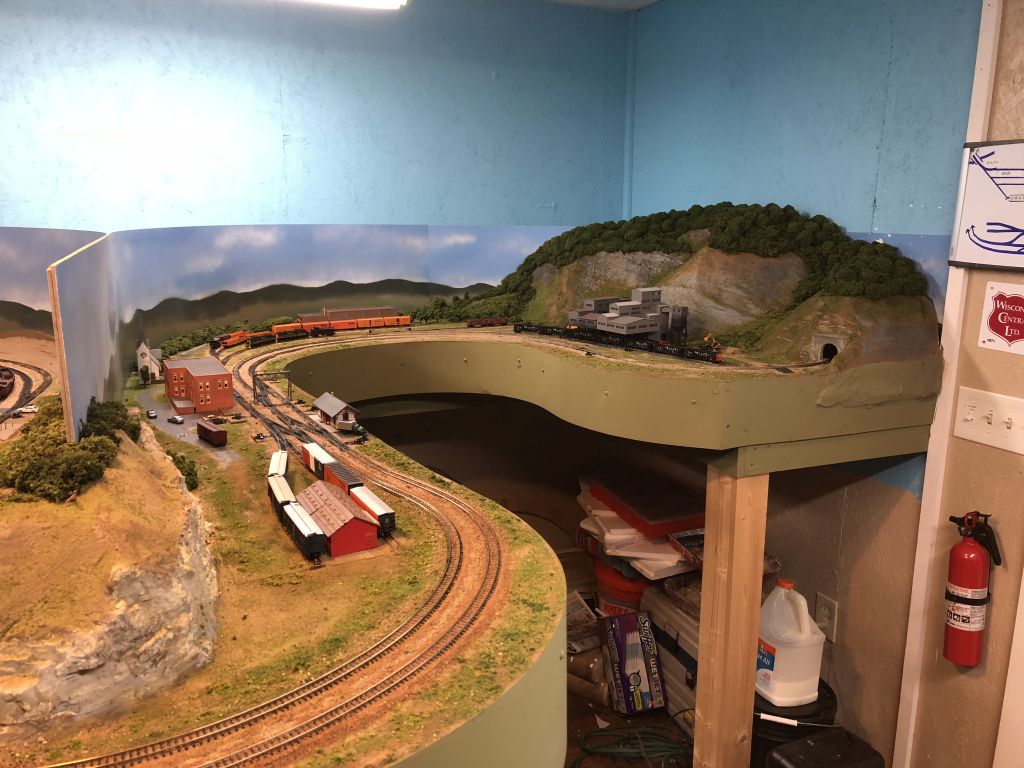 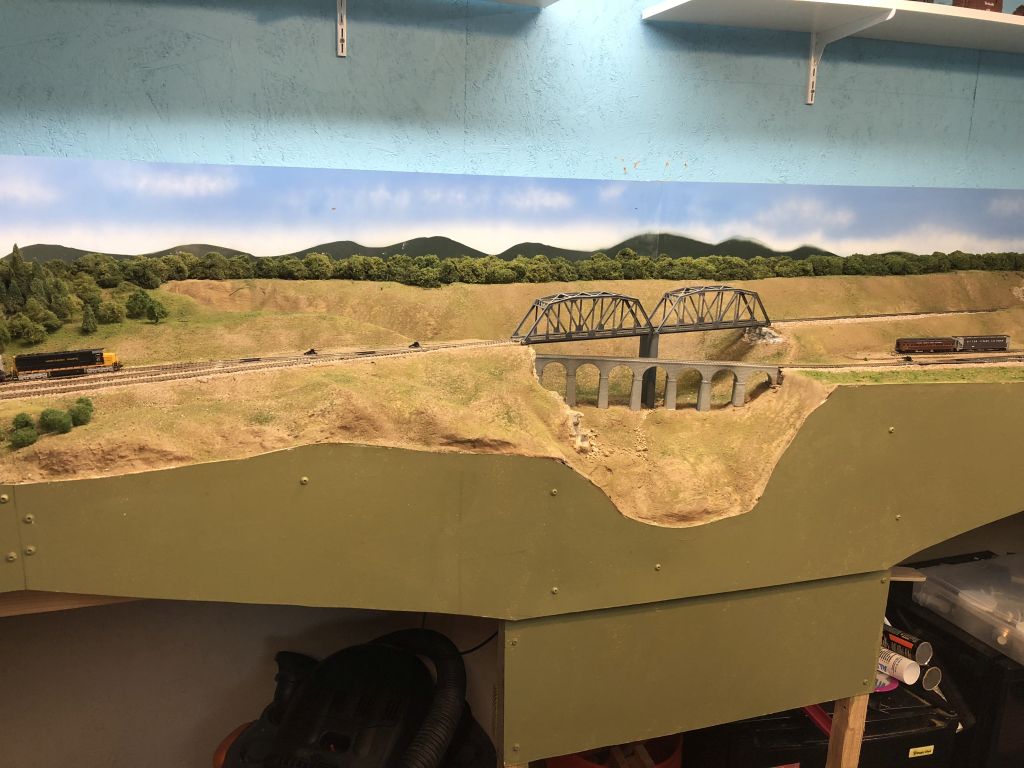 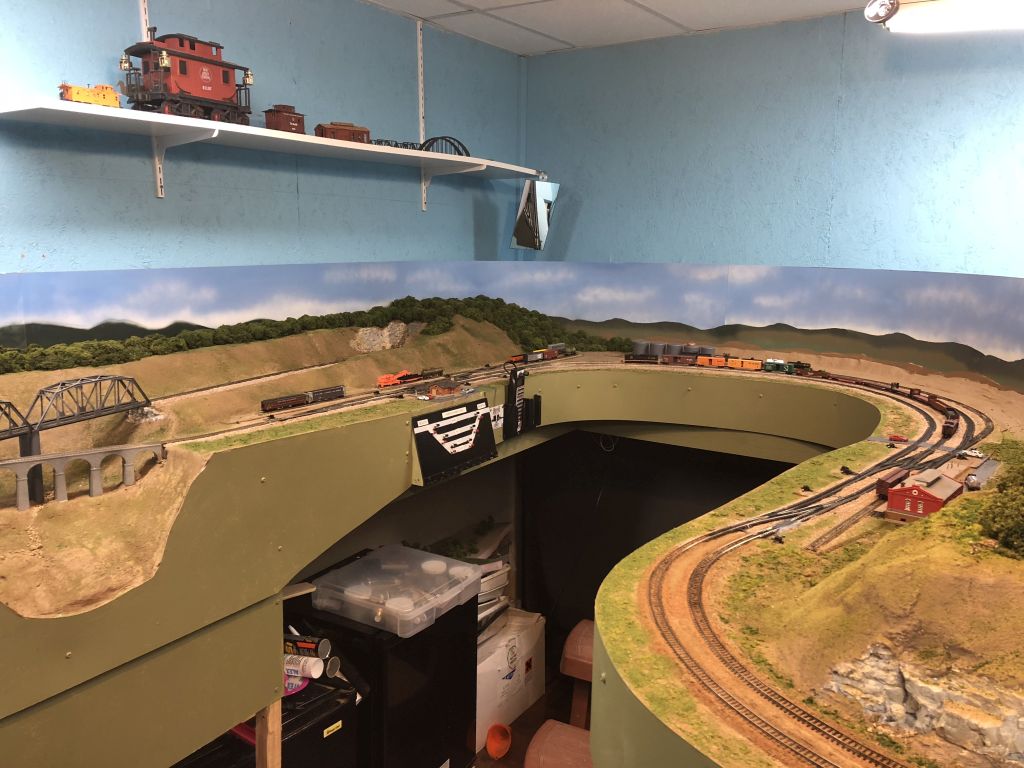 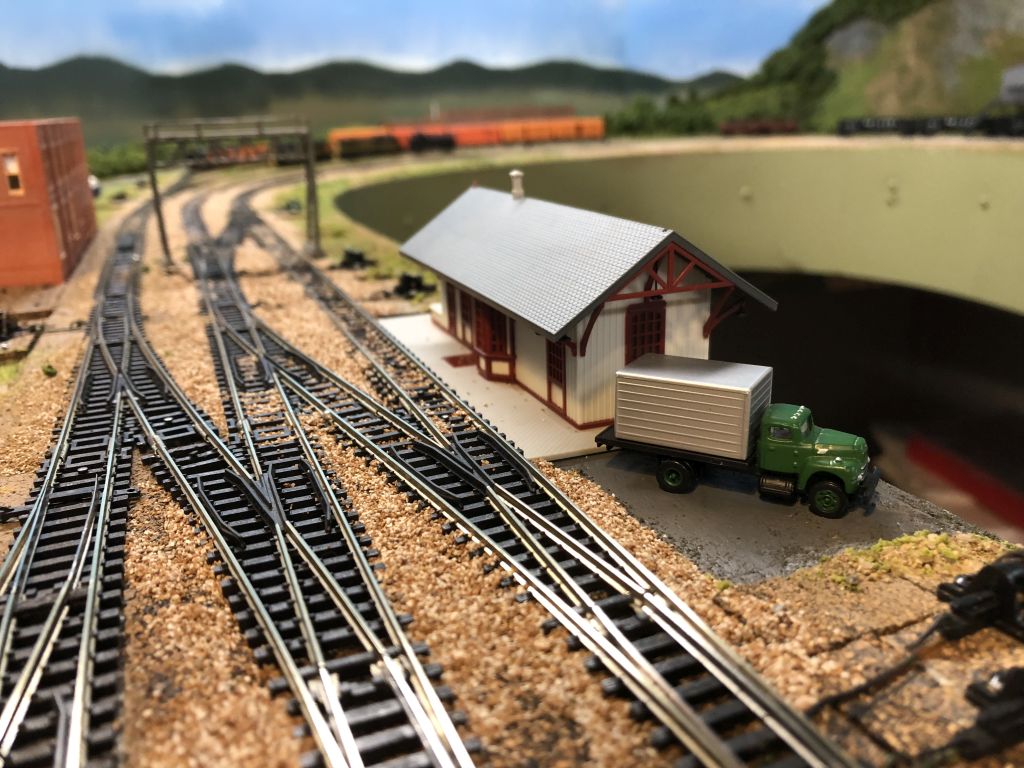 I have enjoyed monitoring your e-mail ideas.

There is something very satisfying about seeing a layout right from the very start – and what a train room too.

And please don’t forget the The Beginner’s Guide if you are tired of dreaming and want to start doing.