The response to Kim’s track cleaner has been startling:

Lots asked on the comments for a ‘how to’ – and a good number of emails were sent to me too.

But Kim was ahead of us all. Got this in shortly after his first post on the cleaner:

“Hi Al and everyone.

How to make a dragging track scrubber:

1 old car frame with wheels.
two screw’s with the heads cut off.
metal plate with a dish scrubber instant glued to it.

Take your old car and inlarge the two holes each end already there. Make the hole’s slightly bigger than the screws so they slip threw freely but tight. Line up the holes in the car body with the plate. make pencil marks and drill two holes. now make sure the holes are big anough so those two screw posts screw into them.

Glue the pad on with instant glue onto the plate. Slip the posts into the body of the car and threw. The scrubber will sit even on the track and if you lift the car the posts will slip threw.

Now when the scrubber is sitting on the track you can add bolts to the posts to push down with more force. If you secured the scrubber to the car it will cause the wheels to lift if you add weight, and may cause the car to start to bend or warp.

The more force you add to the scrubber the more you will have to add to the car. You don’t want that. If need be can add tiny weights above the wheels each side to push down on the wheels..but I didn’t have that problem. 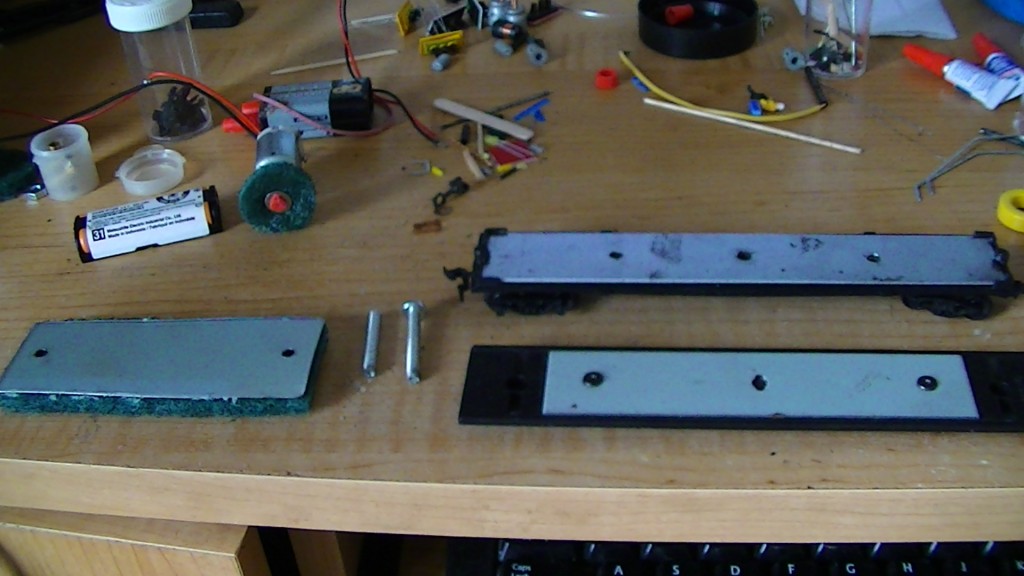 I’m using the same dragging scrubber for the motorized one. Take an old car. Take a small RC high output power motor, or I think a hair dryer motor or similar will do.

As long as you add power to it and is hard to stop with your finger will do. I took a used instant glue top cut it… added a tiny washer to the large end, slipped on a pad that I cut into a small circle.

Slip it on the post. Add another tiny washer (in photo). I did it this way as it wears down and is useless it would be very easy to make another fast and cheap.

Now take your car. If it has a hole in the centre already, drill it out just enough to slip the head of the motor into it (meaning where the post comes out that little head piece).

Now the motor post should be sticking out the bottom of the car. Attach your pad onto the post of the motor, it’ll be tight so give some force. Now secure the motor into place with a bracket or something so it doesn’t move and is even.

I took a volume switch from an old radio to vary the speed of the motor. A 2.7 volt battery run this scrubber at high speed. As you can see with the test track, it was passed once and you can see how much a difference it did on a over 20 year old dirty track.

The bracket you see in the other photos isn’t very good and was moving too much. You van use the extra holes in the car body to make a bracket to hold the motor in place.

This build looks very crude but works amazingly well. If you don’t mind making 2 tiny holes in the top of the car body you can slip a thin wire inside to activate a power switch to turn it on and off and well as tuning up the speed of the motor.

I had a set of old phones and am using the batteries to run stuff and test stuff with as they are rechargeable threw the old phones. I have one powering my scrubber.2.7 volts. Not many if anybody leaves the scrubber on the track or runs it all the time.

Once done cleaning remove it till next time – the way it cleans, it will be a long while before using again. And I use a ez command centre and ez track on some of my layout and the scrubber didn’t hurt or effect it or any points.

Any comments or suggestions would be great. Thanks everyone and thankyou Al. 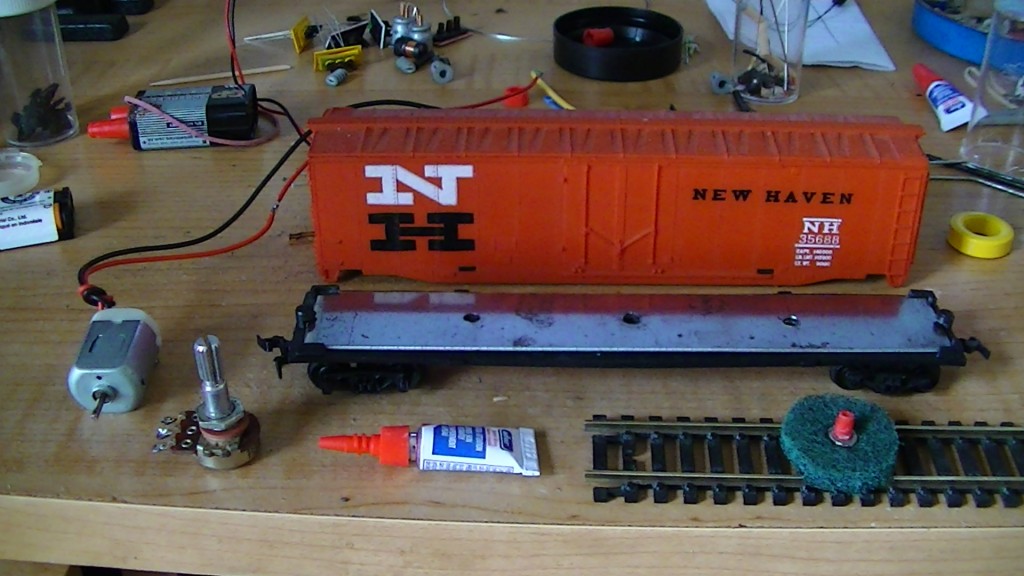 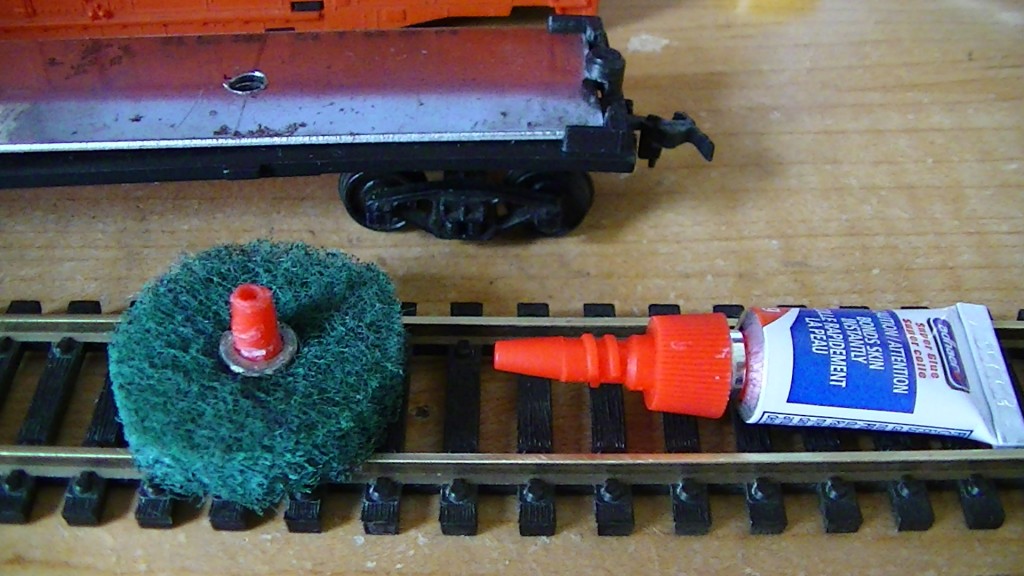 A fantastic ‘how to’! Please, please do leave your comments below.

And a huge thanks to Kim for sharing his fantastic work with us all.

If you’re heading off to ebay for parts to make your ‘track scrubber’ – have a look through the ebay cheat sheet and see if you can bag a deal.

Lastly, here’s the latest installment from Dave. It’s a hoot! 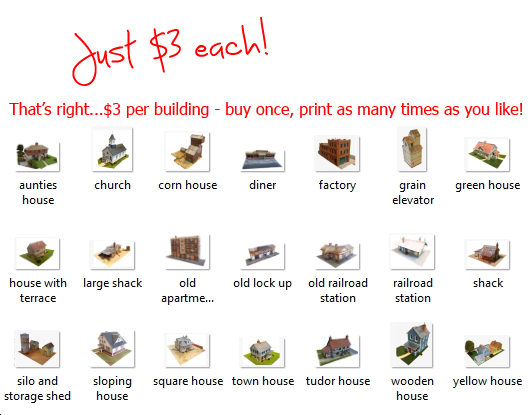