Kurt’s been in touch with his German model railway.

I do really enjoy the layouts with a theme, especially the ones that are inspired by trips or past events.

And because a layout can be whatever you want it to be, the options are limitless:

I’ve been reading your emails now for about a year, and the many postings, along with several YouTube videos I’ve found, have been really helpful for the layout I started in the fall.

Like many of your contributors, I’m resuming a long-dormant hobby I started over 40 years ago when my daughter was a toddler.

I began with a Tyco HO set and adapted track plans from a booklet of blueprints the Atlas Co published on layouts.

To facilitate moving the trainboard, which we used on the floor only at Christmas time (as in my childhood with an O-gauge set of Lionels), I cut a 4’x8’ sheet of plywood down to 6’3” (ca. 1.9m) in length.

Several years later, after my son was born, I had a trip to W. Berlin.

Here I purchased a set of passenger cars and a diesel engine that the Italian company Lima made, these with German and Austrian markings.

I was only interested in running trains, so I quickly filled up the board with dual ovals, a siding, and multiple spurs, running up to 4 engines off two power packs and track insulators separating sections I controlled with Atlas Selectors.

This time I wanted to add a control station with a track diagram, and that approach required relatively complicated wiring through a terminal block. 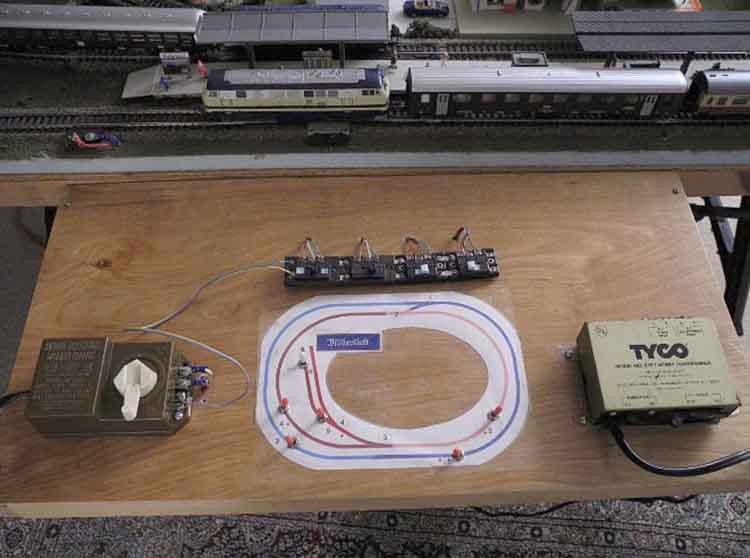 The setting is a village of half-timber buildings that could be anywhere from Troyes in eastern France to Maribor in Slovenia.

But the DB markings on the engine and cars give it away as Germany, probably near Austria (one car has ÖBB markings).

The fictional town is called Müllerslust, based on a song, “Das Wandern ist des Müllers Lust” [my translation is: Traveling is a Müller’s joy], and the town is therefore Müller’s Joy.

Since I have no experience building scenery, I made many mistakes and adapted accordingly.

I started building a tunnel with a long, initially gradual, grade, but for a vineyard I wanted on the hill, I searched the internet and discovered how steep the vineyards in the Mosel Valley are—and I found the possibility of cutting the gradation to accommodate a road. 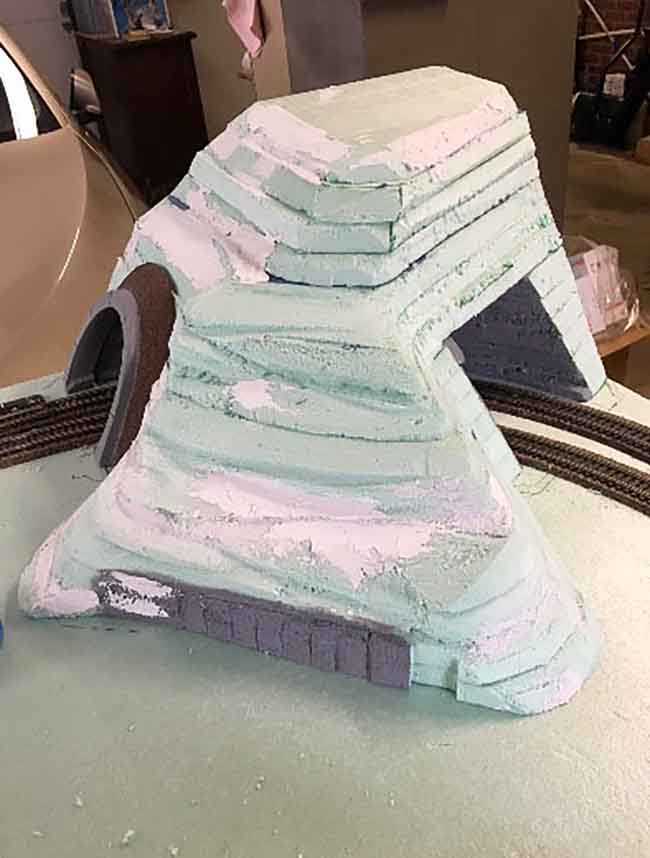 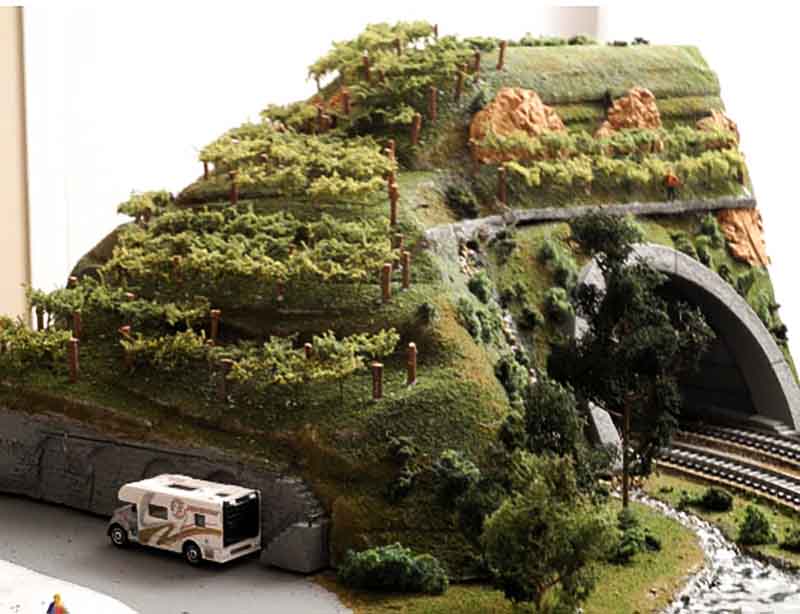 The style of one building is a couple of centuries newer, and I have an anachronistic Baroque garden in the town center (though it goes well with the non-matching building, part of a lot I bought on eBay—thanks for that frequent suggestion).

I’m now far enough along with Phase 1 to share pictures. 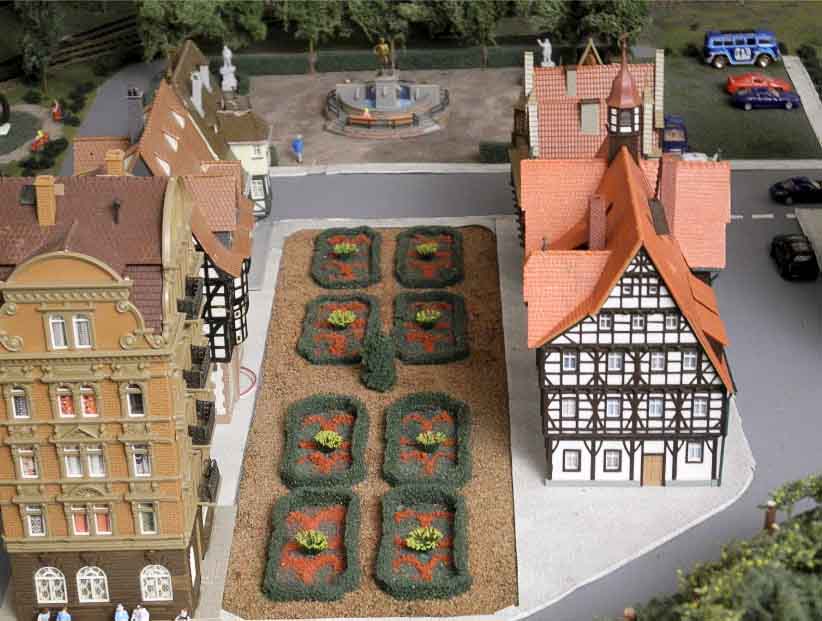 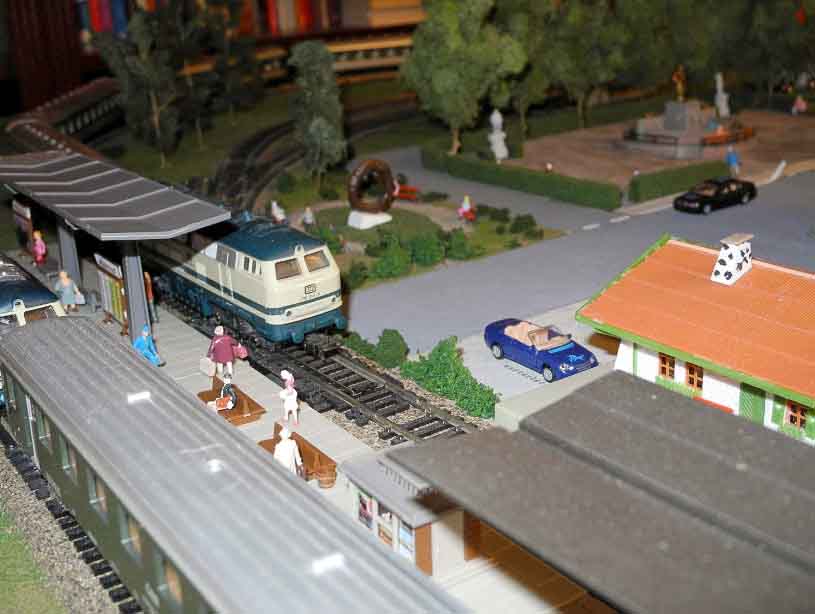 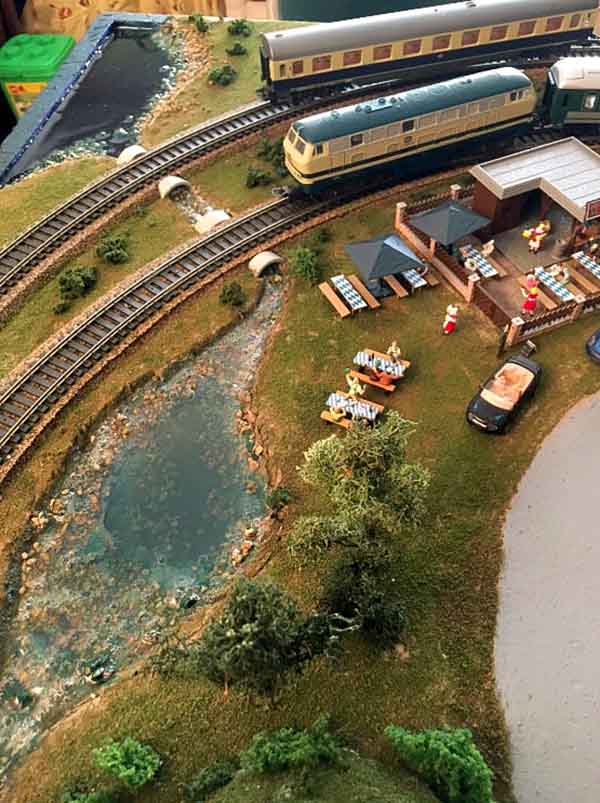 Phase 2 will add lighting, some of which will run grain-of-wheat bulbs on AC and others will run LEDs on DC. For the latter, I’m going to use an old mobile-phone charger, which will provide a constant voltage at an appropriate level.

As you’ll see from the photo of the control block, there is sufficient space to add switches for the lights or other things.

In Phase 3 I’ll add road signage. One problem I discovered with Faller kits, which I like for their detail, is that they sometimes require supplemental kits not identified in their descriptions.

I have a two-track crossing that will eventually need sensors, and a park fountain that requires a pump to circulate real water.

I now have the pump, but it’s not clear what sensors are appropriate.

I had read that Woodland’s “Realistic Water” often develops bubbles.

While we were on vacation, and the trainboard was in the hot garage, the last pre-vacation layer of “water” turned somewhat brown in the shallow pond. With subsequent layers the murkiness has diminished considerably.

For the deeper water (upper left in the picture), I added blue food coloring to the next layer; I used too much coloring, but I notice that in this section I don’t have the bubble problem. The picture makes it look like there are bubbles, but what you see is really a slight rise around the rocks (talus).

Do any of your readers have suggestions on how to avoid the bubbles? It seems the problem develops over several days; you don’t see it right away.

I love that so many of us return to this hobby after decades away, and it’s still just as fun.

A big thanks to Kurt for sharing his German model railway.

That’s all for today foks.

Please don’t forget the Beginner’s Guide if you think it’s your time to shine when it comes to creating a layout.