Hemi’s been in touch again. His last post is here.

“So, you guys want to see another use of TYCO parts? How about this?

Takes a few TYCO trucks, plastic OR the metal ones…..(Yes, theres a reason to this madness!)

The plastic trucks, you model logging railroads? OR have a logging line on your regular railroad as a servant to the system? Need log cars? How about an alternative to the expesive, disconnect cars from Kadee? NOT as detailed, but close and WORk, and in use with logs on them, will look just as good!

Take an look, (actively, that is) for old TYCO or even Mantua cars that are considered “Old Timers”. The trucks under these cars, are the ones, you need!

You’ll see in a bit why I say, the plastic OR the metal trucks for this build….

These are the Kadee cars: 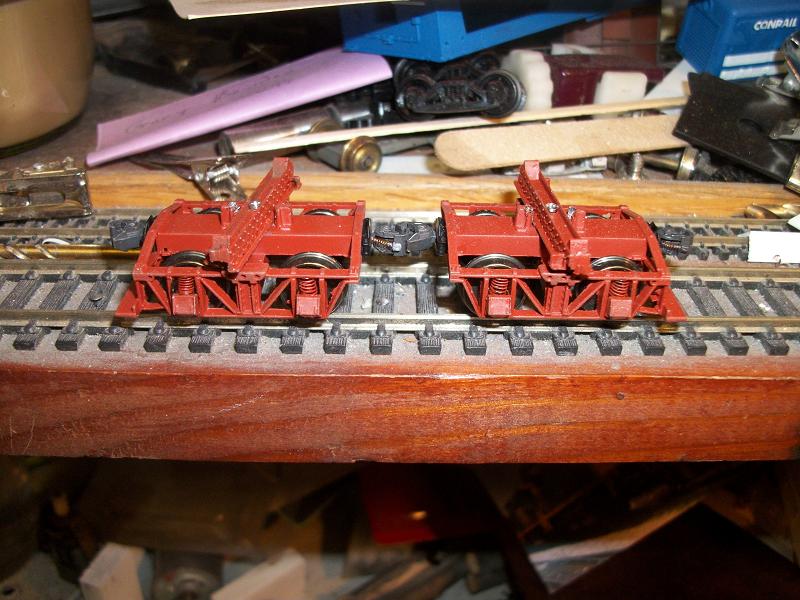 These are nice models, a bit of work to build and a lot of painting of moving parts, YES they do swivel, and transpose as the car is loaded with logs, PLUS, they have sprung wheel sets in them! SO, a little reason to why they are a bit expensive for a set of them! Sadly, I got mine for a good price, otherwise, I wouldn’t have them!

Then as I built these, I seen something…..

A little brass stock, tubes, and solid square rod and a bit of solder and flux, and you can make something a bit close to the Kadee models, but, older looking for a year gone by? Sure, its a logging railroad, they never had brand new equipment all the time anyway, so…..

With the plastic TYCO trucks, you got this: 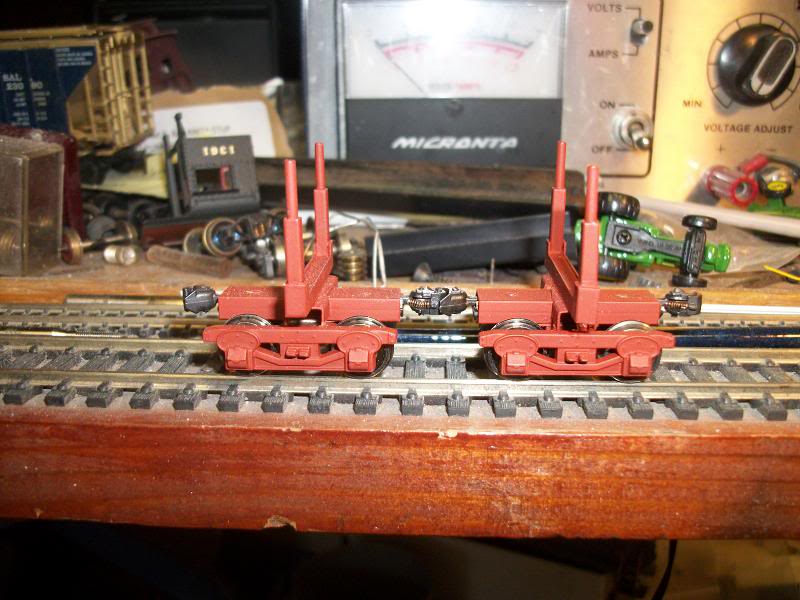 If you look the Kadee couplers are burried inside square tubing thats the same inside diameter of that of a Kadee coupler box, WHICH, allows me to stuff the coupler, and a draft gear box, inside the brass tubing, then it was marked from the outside to be drilled and taped for screws. The top of the inside of this box, has one extra thickness of brass shim stock to give a bit more “meat” for the tap to hold 2-56 threads in and try to prevent stripping out of the threads….REMEMBER, it is brass after-all!

This frame of the log “bunks” are bolted to the truck. NOW, you’ll be enlightened as to why I said both, plastic and metal trucks above! See, the mounting of the bunks to the trucks? 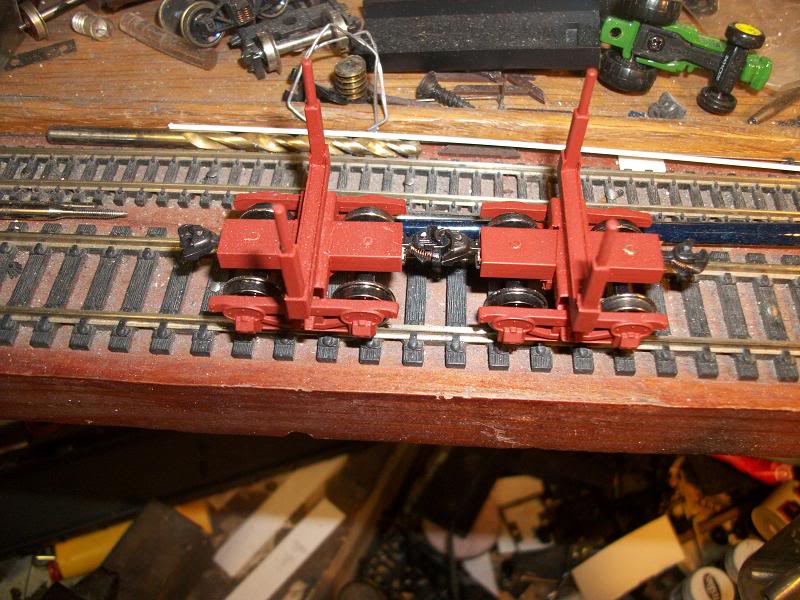 This picture shows that the log bunks made of brass construction were bolted to the plastic truck. THIS “Disconnect car” will NEVER be loaded with logs……..why? Well this is an unloaded model and can’t, these “carriages” have to swivel UNDER the logs, OR atleast the bunks do….At least to allow the car to traverse through curves in the track if these don’t swivel it will derail the car!

On this particular set of “Disconnect” log cars, those plastic trucks, from TYCO (or even Mantua’s will work the same way) but they were plastic, and somehow the truck actually was broken! The plastic snapped right at the location of the truck where the bolt was to hold it to the cars floor, This is WHY these are ridgetly bolted to the log bunks made of brass, to hold them together and keep the bearing locations in-gauge for the wheelsets! Thus, using a BROKEN part, and giving it a new life and returning it back into rail service! Thats why I choose these….. To not toss them away but use them in another light and make use of broken parts….. Most guys either toss ’em out, OR put them around an engine service yard, I choose to putthem back into rail service in a whole other way! Gives them a new lease on they’re life span!

Having that done in the manner I diod it adds to the fleet of log cars I’m building, BUT gives me some that can remain unloaded, for that differernce sake. -Not EVERY car at a sawmill, or in a yard is always “loaded” so.. this gives me some unloaded cars!

These type cars will be hastely detailed, beat up and look terrible as to be the “uncovered” disconnects…..to hide all this, and such and look somewhat realistic. NOW on the metal trucks, this WILL NOT appear the same, the metal trucks, will have the bunk to swivel above the truck frame, to have logs mounted in the bunks and chained down like my other log cars have had done to them.

NOW, when I get to building the metal trucked ones from Mantua, those will have the log bunks to will swivel, and be loaded with real wooden logs! As the bolster center for the screw will be its pivot point…..

Further to the post about calculating inclines, this was the layout I mentioned in my posting, the overall view is not a great shot as it was taken just as a record when it was all packed up ready to be sold.

You can see the incline on the far side rising from points in the outer main line just out of shot, to cross the girder bridge at the far end. This was a climb of about two and a half inches in about seven feet or about 1 in 30, eased a bit at each end to transition to level.

A pacific or 4-6-0 would take three pinpoint bearing coaches up the bank quite well, and a pannier tank with a traction tyre would do two of the old plain-bearing Triang hopper wagons, fully loaded with fish grit, and a brake van, but that was asking a bit much.

The layout overall was 6′ x 4′ and built on crossing L-girders made of 2″x 1″ so it was quite rigid but would just sit on the spare bed whenever we didn’t need it for visitors. If we had someone to stay, it could be stood up on its end against the wall and covered with an old curtain. 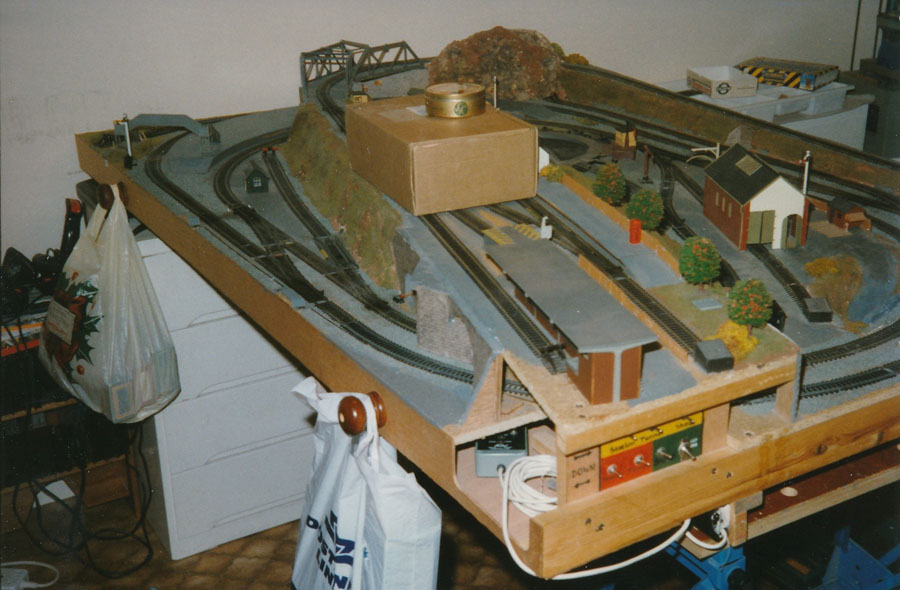 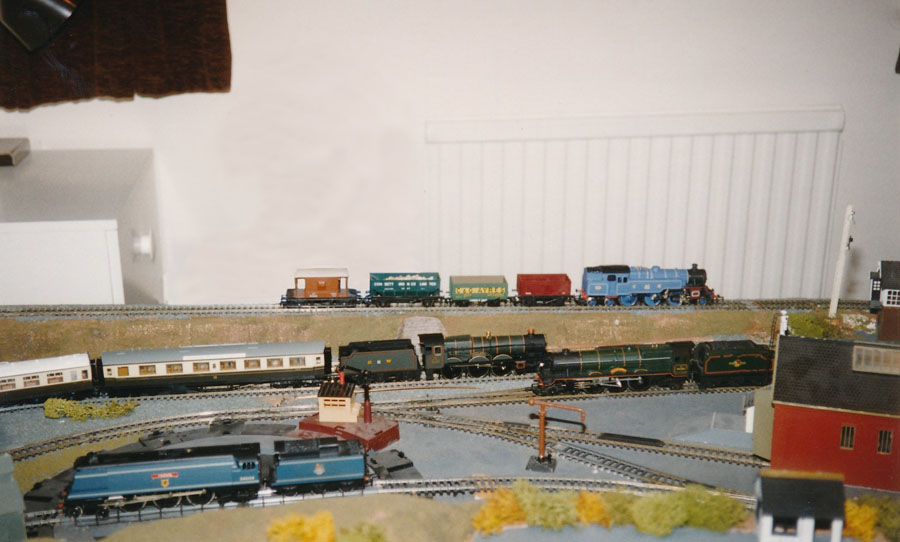 A big thanks to Hemi (again!) and Rod.

And if you’ve picked up a tip or two over your last few visits, don’t forget the Beginner’s Guide is cram packed with ’em.

9 Responses to More on steep inclines